A viral outbreak has mutated all human life that comes into contact with it, manifesting a monstrous darkness to be stopped by one man. Ripping limbs from these abominations and spreading their entrails across twisted locales like an artist, painting with gore on an alien canvas, sounds familiar. Despite being developed by Striking Distance Studios, led by Dead Space co-creator Glen Schofield, The Callisto Protocol is a spiritual successor to the cult classic Dead Space franchise rather than a canonical entry.

Borrowing heavily from the franchise that inspired it The Callisto Protocol throws players into the role of wrongfully imprisoned cargo pilot Jacob Lee on Callisto, a moon of Jupiter as the viral outbreak kicks off. The third-person survival horror adventure ultimately takes place in the giant looming shadow of a classic IP and attempts to tell a tale decorated with guts and gore that can stand on its own mutated feet.

The opening moments set players up as Jacob, portrayed by Josh Duhamel, upon his incarceration at Callisto’s Black Iron Prison at the hands of Sam Witwer’s Captain Ferris. The brooding, malevolent evil at the heart of The Callisto Protocol is unleashed almost immediately, establishing the gruesome uphill battle Jacob must overcome to not just escape the prison but the planet as well. 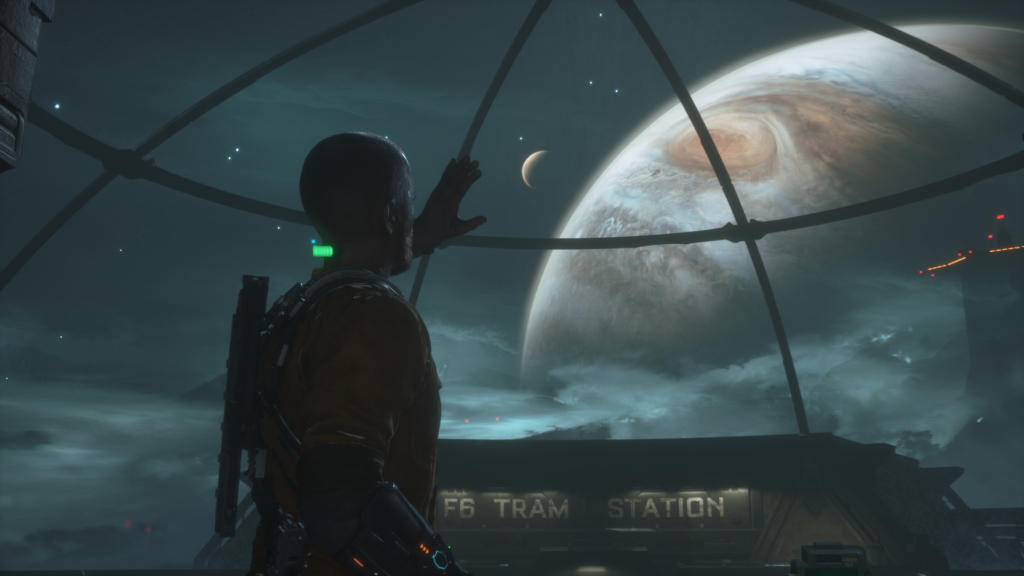 The premise is interesting but throughout the approximately eight-hour adventure, the story never really manages to get going.  Intriguing ideas are established however they are rarely  afforded the opportunity to breathe. Cutscenes are seamlessly integrated with the gameplay that maintains the cinematic scope and immersion at all times, providing a visual consistency that helps make up for the narrative shortcomings.

Throughout the blood-soaked experience only a handful of supporting characters are present, lending to feeling of isolation at most times. Karen Fukuhara, known for her role as Kimiku in Amazon Prime’s The Boys, toys with Jacob, blurring the lines between friend and foe and delivers the only real meat to the narrative outside of the virus. It’s a genuine shame that The Callisto Protocol under-delivers narratively considering how many other things it gets right. 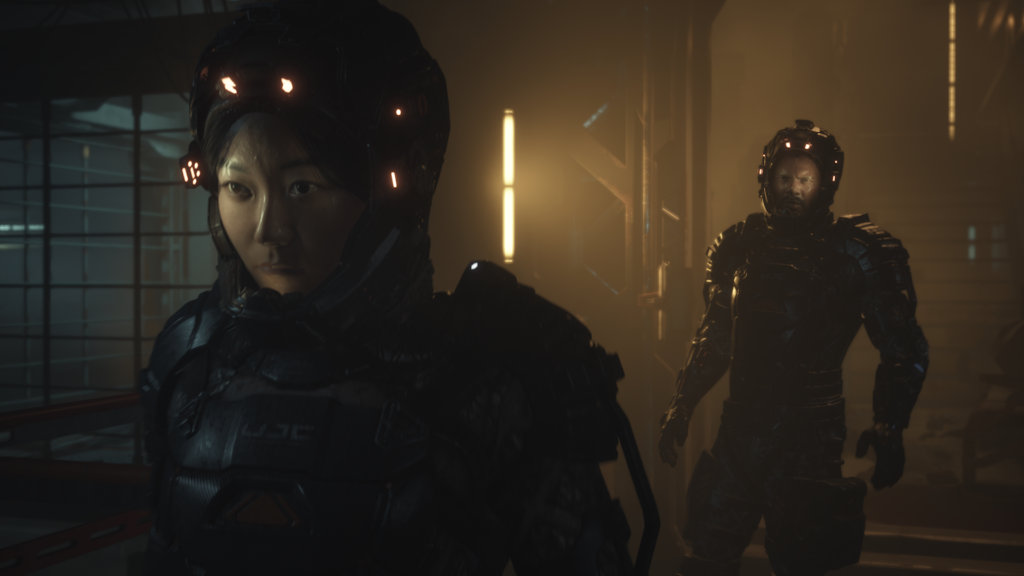 Combat blends melee and ranged attacks with a stun baton and handful of guns, and later a telekinetic powered gauntlet is introduced, though the emphasis leans heavily in favour of up close, melee combat. Light and heavy attacks can be alternated to create combos and after executing one, a brief window emerges for a single shot to be fired at an automatically locked on weak spot. This combo ender delivers high damage and conserves ammo which is in limited supply, effectively encouraging more risky melee encounters rather than safer ranged onslaughts.

What makes melee combat even more dangerous is the inability to spam melee attacks. After just three swings the enemy is able to get an attack in, requiring the player to make use of the single-thumbstick driven dodge mechanics. Holding the right thumbstick left, right or back will dodge an enemy attack while tapping in a direction at the very last moment before impact will trigger slow-motion and provide an opening for the player to retaliate. The stick dodge system takes only a few encounters to master and ultimately feels more fluid than a traditional button based system.

Utilising the GRP telekinetic gauntlet adds another interesting dynamic to combat that unfortunately makes the player feel a little too overpowered. Enemies and objects can be picked up and thrown, rendering actual combat unnecessary if used effectively. Enemies can be thrown over ledges for instakills, flammable canisters can deal immense damage and enemies at a distance can be brought up to the player for easy melee dispatching while they are stunned. Upgrading the GRP can increase the duration it can be used before the battery depletes, similar to a stamina system, and needs recharged automatically with a collected battery or over time with rest. One on one encounters are effortless to survive, even on the hardest difficulty referred to as Maximum Security. The real danger is when surrounded by multiple enemies. Without an enemy lock on or targeting system, the player needs to be incredibly alert to the enemies on screen as well as audio cues that may indicate the position of an offscreen enemy about to enter the fray. Surviving multiple enemy encounters is a breeze if the player is on high alert and on top of making sure guns are reloaded and the best gun for the job is equipped.

Switching guns is not instant, the animation to do so takes a few seconds and can often be interrupted by enemy attacks or dodging. Taking advantage of every opening in combat is critical to ensure gun readiness and avoiding firing a gun that isn’t loaded. Healing is also not an instant process and is essentially impossible to do while in active combat, taking around five seconds to perform. The absence of an instant healing system makes melee combat even more dangerous, encouraging players to always be prepared when they find themselves alone. By denying players instant activation of healing or weapon swapping, the stakes are higher and create a more genuinely terrifying experience when enemies begin to swarm. Death in The Callisto Protocol is oddly satisfying due to the implementation of some genuinely brutal, gory and violent death animations. Depending on the enemy type that kills the player, a variety of inhumane executions are performed that would not look out of place in a Mortal Kombat fatality sequence. Blood, guts and core are ever present in The Callisto Protocol and it’s cool to see it factor in to the player’s death as well as the mutated enemies. Looting is a key component of the campaign, rewarding players with currency to spend on upgrading their weapons at 3D printer type stations. Ammo can also be crafted, new weapon types can be unlocked by discovering their blueprints, and buffs to their general performance are also available.

Playing The Callisto Protocol on the hardest difficulty setting, Maximum Security, increases enemy damage outputs but with effective dodging and situational awareness, the experience remains very manageable with the exception of a painful final boss encounter at the very end. Playing on easy, Minimum Security, is extremely simple and death essentially impossible. I highly encourage players to try Maximum Security, as the difficulty can be changed at any time if the experience feels to difficult. On easy it’s a horror game… for the monsters. The player is too overpowered for the monstrous enemy threat to ever feel genuinely punishing. There are no lore documents or files to read, no additional backstory to discover and when combined with the very straight-forward and largely predictable main story, the narrative depth is undeniably lacking. Audio logs can be collected but do little to further inform the current situation on Callisto or the events that lead to it.

Atmospheric tension is delivered in spades, creating a harrowing backdrop for Jacob’s survival adventure. From the artistically creative environment, eerie emptiness and masterful sound design, The Callisto Protocol feels deathly alive and ominous at every turn. Stunning imagery and haunting sound effects help animate the static narrative with such finesse that it’s impossible to deny that every aspect of the audio-visual presentation as bar raising. Character models are impeccable, with the faces of the cast in particular being second to none. The animation and detail are jaw dropping, easily delivering the most photorealistic character presentation I have ever seen in a video game, on console at least. The cinematic feel to the gameplay and its iteration of cutscenes are completely immersive.

The Callisto Protocol is an excellent, linear, story-driven foray into the survival horror genre that has long been in desperate need of revitalisation outside of tentpole franchise, Resident Evil. Overpowered gameplay, a weak narrative, brief runtime and undeniable comparisons to Dead Space don’t prevent The Callisto Protocol from delivering a solid experience that genre fans will love. The impeccable visuals and atmosphere are truly genre defining.