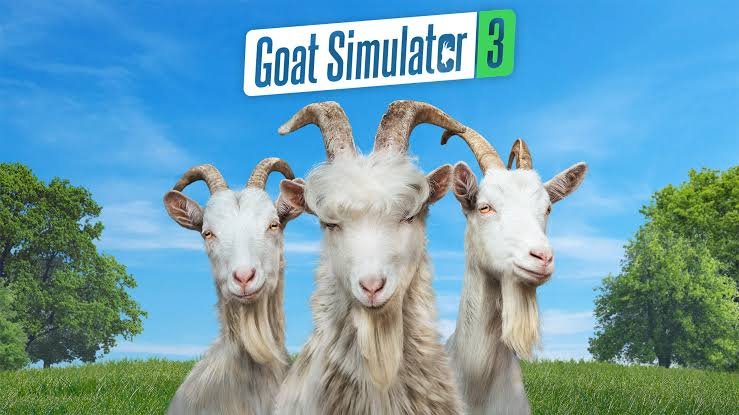 Wreaking havoc in an open world is always an enjoyable yet simple premise and an easy sell for a lot of players. Throw in an extremely customisable goat as the playable hero and it’s a no brainer. Goat Simulator 3 is the follow up to 2014’s Goat Simulator which was a chaotic parody of the then-rising trend of simulator titles. Where’s Goat Simulator 2 you might ask? That’s part of the fun, there is no Goat Simulator 2.

Coffee Stain North’s playful humour extends far further than its title, offering a sandbox of unsuspecting people and countless ways to torment them as a goat. Playable solo or co-operatively with up to three other players, goats reign supreme in the fictional San Angora with a wide variety of challenges, references to other games and a goat-load of mischief. Goat Simulator 3 is all about kidding around…

Everywhere you look in Goat Simulator 3 is full of things and people to lick, headbutt and destroy. Objects and people can be dragged across the map by licking them, latching on with the goat’s tongue to take wherever the player wants. Tall buildings, skyscrapers, mountains and towering gold statues are just some of the literal highs of Goat Simulator 3 while explorational freedom and chaotic, over-the-top antics offer some of the most ridiculous gameplay highs to keep players as wild as their playable goat, Pilgor. The ragdoll physics are just as amusing this time around, whether they are the result of poor Pilgor being hit by a car, launched by an explosion or manually triggered. Running, jumping, attacking and licking things are just the basics, I call them GoatSim101. Latching onto cars and skating behind them is fun but now players can actually hijack cars, not unlike GTA, and drive around with Pilgor’s head and chaos-seeking tongue flapping in the wind out the window. Additionally, Pilgor can also grind on power lines and metal railing to get around San Angora. 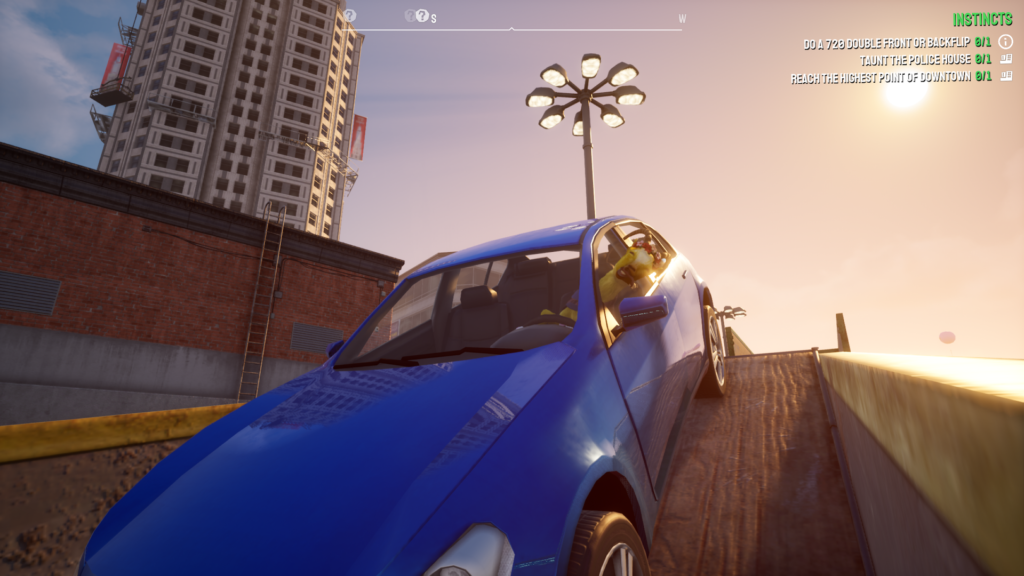 See a peaceful yoga routine by a group of people? Introduce yourself with a lick and launch them off a cliff. Observe a fight across the road? Headbutt your way into the interaction and show the silly humans which goat is the boss. Minding your own business on a trek up a nature path in the forest and see people literally wrapped around trees? Destroy the tree, destroy their dreams. No scenario is off limits and there is no shortage of unexpected human interactions happening that are irresistible to disrupt. Witnessing a police officer throwing handcuffs like ninja stars at a citizen, picking them up, carrying them in a ball and throwing them at a statue and telling them to “go be a good citizen now” was one of my favourite random encounters, you can see it in the video here.

The map of San Angora is uncovered by synchronising Goat Towers, revealing new points of interest and perhaps more importantly, allowing entry to the Goat Castle. Completing quests rewards Illuminati Points which can be spent to upgrade the castle from its crumbling origins to a regal sanctum fit for a king or queen of goats. Illuminati Points and Karma are rewarded for completing Events, which are the equivalent of story quests, and Karma points are awarded for completing Instincts which are essentially challenges such a performing backflips or emoting. 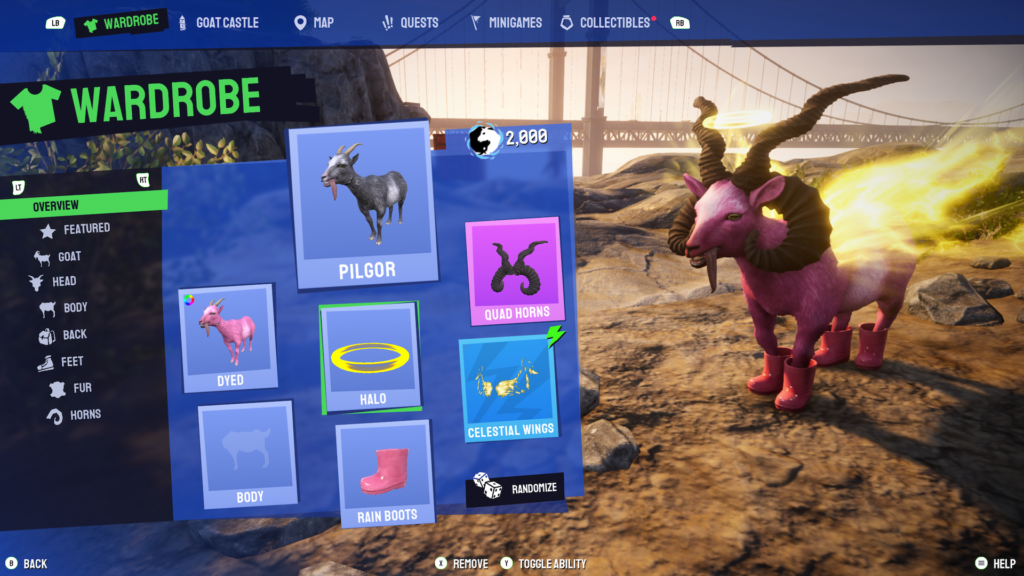 Goat Simulator 3 takes great pride in the unexpected. The things that are happening within San Angora and the many ways to run amok and cause chaos never ceases to amaze and present a world that is difficult to become bored with. There are no rules, no death and no leash. The stakes are 100% risk free and the rewards include wild customisation options for players to create incredibly unique, appropriately ridiculous and borderline insane varieties of their anti-hero goats. Fur patterns and colours, jackets, hats and horns, boots and gear such as gliders and jet packs are just a few ways players can customise their goats by spending Karma. Some of my favourite options are the alternate animals the goat can be transformed into such as a shark that moves around on a skateboard or the amazingly named ‘Tall Goat’ which is in fact a giraffe. The graphics are certainly dated but it somehow works in favour of Goat Simulator 3. This experience is all about simplicity and a more photorealistic art direction would remove a lot of the charm of the ragdoll nature of the gameplay. The dialogue sounds very stiff too but again it feels intentional, resulting in a bland audio visual presentation that works despite feeling like a game from 10 years ago. Fun sound design keeps the explosive, bleating and physics based antics feeling entertaining. Goat Simulator 3 is a fun, wild, creatively dynamic playground for up to four players to live out their wildest goat fantasies. Teeming with references and parodies of classic titles, including an opening that is too good to spoil, the mayhem has clearly been lovingly crafted by Coffee Stain North to give players a sandbox world to rule their way. Licking, headbutting, grinding and ragdolling across San Angora is constantly amusing and satisfying, especially when playing with others.

+ Over the top physics

+ Plethora of references to other video games

+ Great fun with other players

– Some of the jokes feel dated * A digital code was provided for the purpose of this review *