For over twenty years the Bratz franchise has maintained a solid foothold in the fashion doll space and has spawned a variety of media such as animated television shows, music releases, a live action film, extensive clothing and merchandise and of course, several video games.

Bratz: Flaunt Your Fashion is the latest video game adaptation of the fashion empire, bringing the original Bratz Pack of Yasmin, Cloe, Jade and Sasha on a single player adventure that takes them from Stilesville to Barcelona, Seoul and the Stylin’ Soirée.

The girls set out to catch the latest scoops for their Bratz Magazine while looking as stylish and trendy as the player sees fit. With dozens of clothing and makeup options to unlock, Bratz: Flaunt Your Fashion gives players the chance to let the Bratz Pack do just that.

Starting out in their hometown of Stilesville, players can select which of the four members of the Bratz Pack they want to play as. Cloe, Jade, Sasha and Yasmin all play the same way and offer no gameplay advantage over the other and can be switched out throughout the experience.

The Bratz Pack are more than fashion reporters and run into everyday people that need their help. These optional quests see the girls typically looking for items or talking to other characters to complete. They are short, sweet and simple, and reward the player with money to spend on new styles at the fashion stores throughout the game’s three explorable cities and style points that convert into social media following. 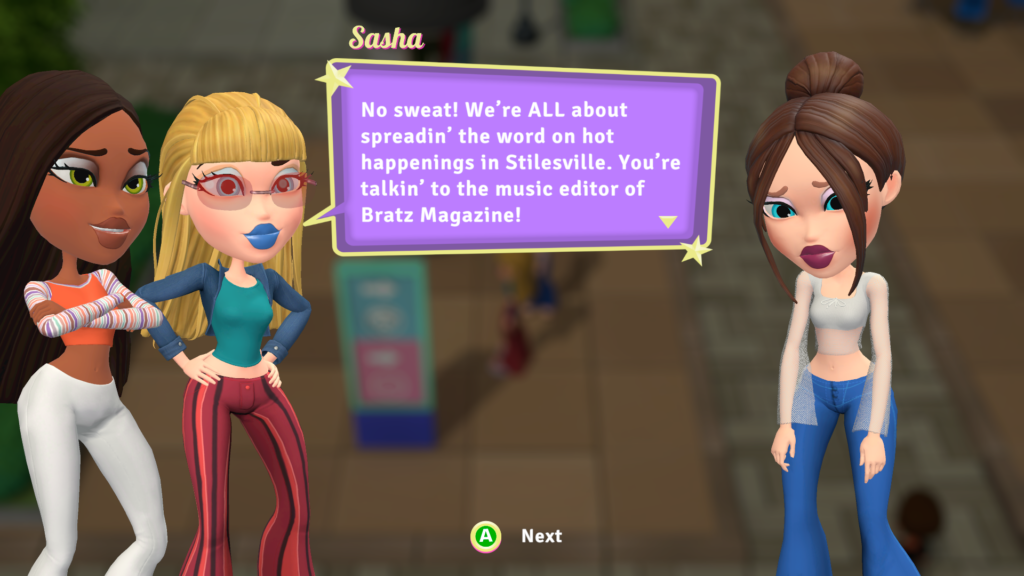 Stilesville introduces players to the map formula that continues on into Barcelona and Seoul. A total of five locations are available at each city with some only unlocking with story progression. The Apartment serves as the base of operations in each city and contains a wardrobe for players to customise their hats, glasses, tops, bottoms and shoes, as well as a vanity mirror to apply a variety of makeup styles. New style options are awarded for completing optional quests, opening chests found in the environment or bought from fashion stores. Customising their appearance is simple and keeps players and their chosen Brat looking stylish and fresh with the wide variety of options at their disposal. 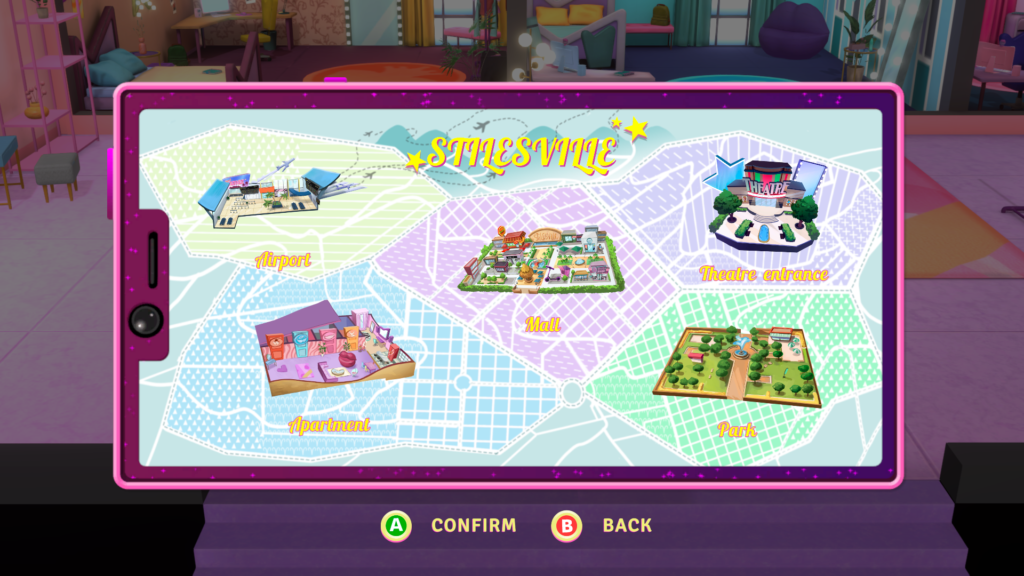 Upon completion of some optional quests and most story quests, players need to interact with a computer in the Apartment to publish stories which converts their earned style points into social media followers, with certain numbers needing to be met in order to progress the story. New computers can be bought at tech stores which will significantly enhance the conversion rate of followers to make this much faster.

Aside from the Apartment, each city has a Mall location that is home to fashion stores, optional quests and a unique racing challenge and faster mobility tools such as a scooter, hoverboard and rollerblades. These can be rented with a one-off fee that lets the player get around the Mall much quicker and the optional racing challenge lets players test their speed and control. The final location that all three cities share is the airport which lets players travel to the other cities once they have progressed the story. Once a new destination has been unlocked, the player is free to travel between them whenever they please. 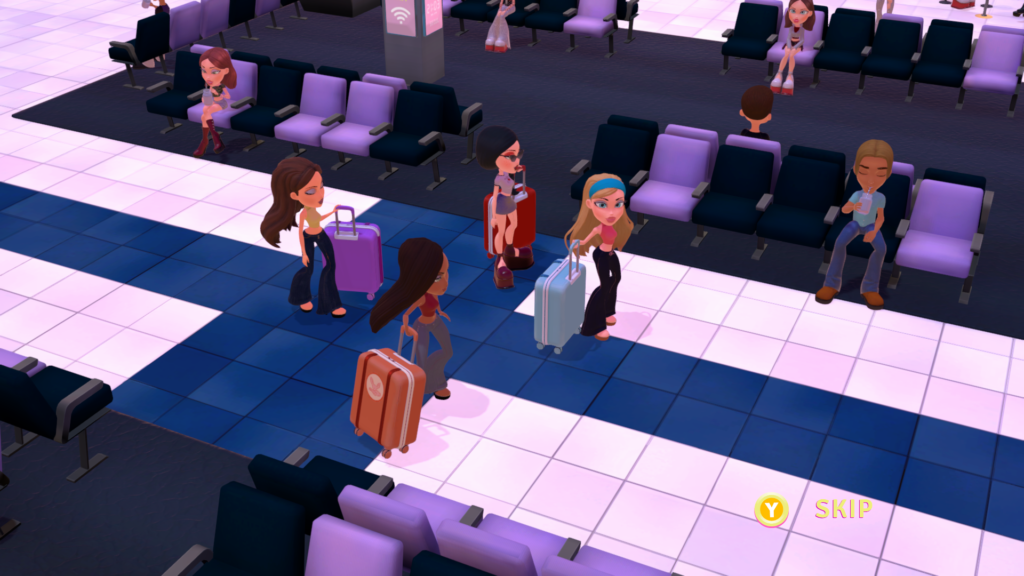 With the three fixed locations of each city established, each one also has two unique locations that are related to events such as art exhibitions, extreme sports competitions and a fashion show that are tied to the main quest lines. Players can interact with characters at all of these locations, buy things and find chests as they work through the main and optional quest lines. The core gameplay is very simple, tasking players with simply interacting with people and objects. There are specific points scattered around every location where the player can take a photo, including selfies to unlock some additional style points. 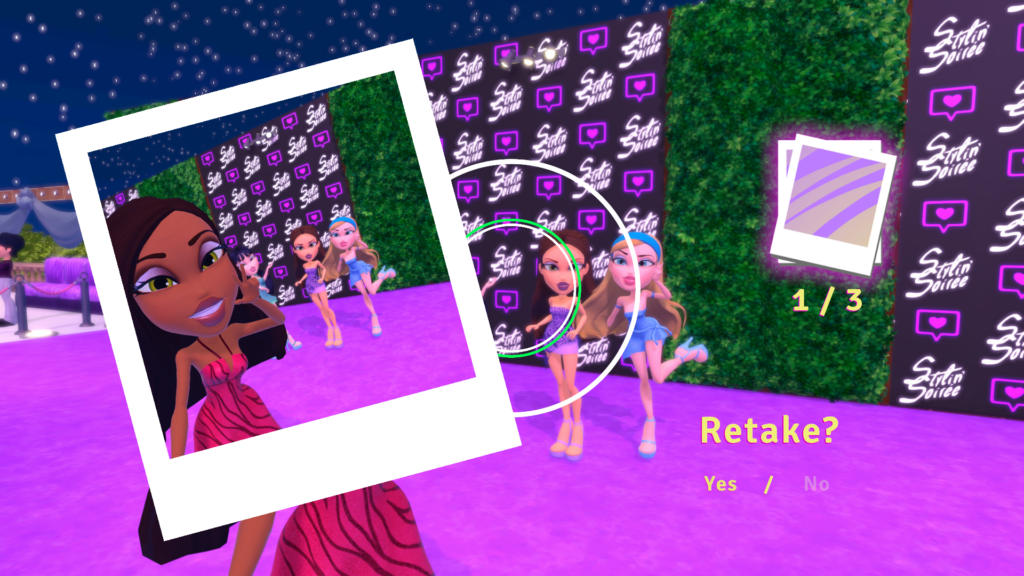 At any time the player can access the map and fast travel to any unlocked location within the city or access their quest log to see where they are at with each of the main or optional quests they have taken on. A clues section is provided for the handful of quests that don’t give players the exact information of where to go or who to talk to. For instance, a clue may say what a character is wearing to help the player find them. It’s a simplistic system but it adds a little layer of thought to an otherwise straight-forward affair.

A handful of sequences function like quick time events such as dancing or singing by pressing the corresponding button with the events on screen. These are pretty simple and forgiving, with no consequence for failing to press them on time. 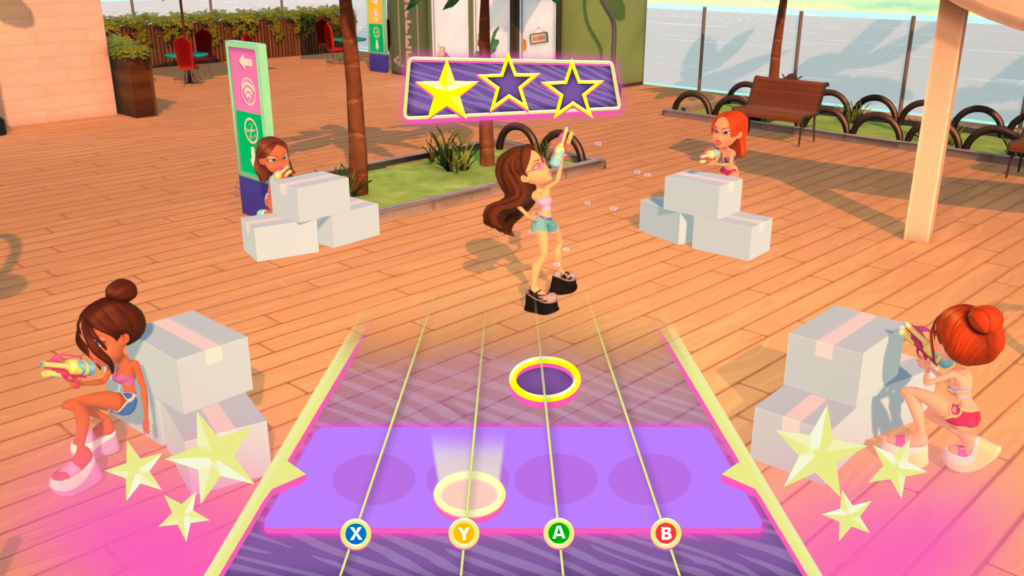 Bratz: Flaunt Your Fashion has a charming art design and funky soundtrack to keep the experience light and exciting for its younger target audience. Without having been exposed to much Bratz personally, a single frame of this title undeniably screams Bratz, and it’s that brand recognition that will feel so familiar and exciting to fans of Bratz in whatever capacity they’ve seen it in. Majority of the dialogue is presented as voice overs with minimal reading required which goes a long way in feeling more accessible to the youngest of players. 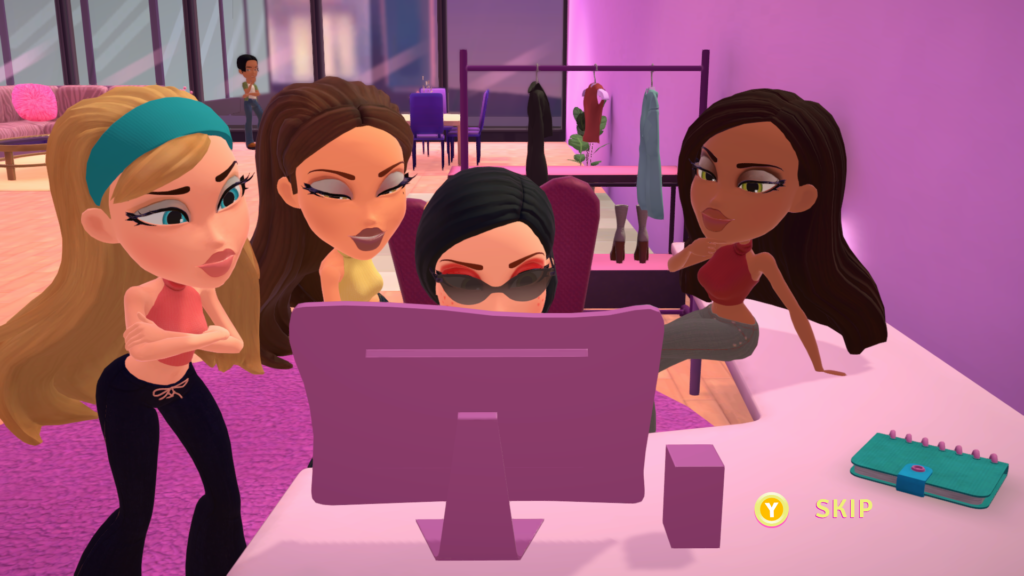 The simplistic gameplay, quest structure and customisation is an easy sell for young players. It does exactly what it needs to do for who it needs to. There is a good four-to-six hours worth of content on offer for players who want to seek out the optional quests and find all of the hidden chests and photo spots. Bratz: Flaunt Your Fashion ultimately delivers a casual gameplay experience that’s accessible, entertaining and surprisingly interesting for the quartet of fashion reporters. * A digital code was kindly provided for the purpose of this review as an Outright Games Ambassador. *