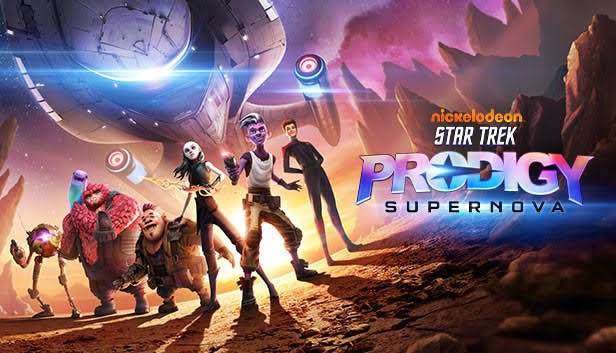 Set in the world of the hit Nickelodeon animated series, Star Trek Prodigy: Supernova is a race against time for the crew of the USS Protostar to repair their ship and rescue their friends before the system is destroyed by a supernova.

With stakes as high as this, Dal R’El and Gwyndala must overcome every enemy, obstacle and puzzle as if their very lives depend on it. Armed with a unique array of melee and ranged weapons to keep them feeling distinct, players can freely switch between Dal and Gwyn, or play co-operatively via local split-screen.

With plenty of puzzles to solve, secrets to find and enemies to destroy, Star Trek Prodigy: Supernova follows the footsteps of its on-screen companion, Star Trek Prodigy, bringing the near 60 year franchise to a younger audience.

It is worth noting that despite being in my early thirties, I personally have never seen a single episode or film from the Star Trek franchise. Fortunately, Star Trek Prodigy: Supernova does not punish me for this, so players in the same camp can rest assured that they do not have to know what a Klingon is or means.

On the flip side, Supernova does expect you to be familiar with the Star Trek Prodigy animated series as it almost immediately starts referencing characters and events via dialogue that are not explained in-game. Without spoiling anything, the family background of one character is discussed as though the player knows who the other characters being mentioned are, as well as their affiliations, and this takes place in the very first mission of the game.

This leads to story and character moments that don’t have the context or weight to a newcomer as they may have for viewers of the animated show. While Supernova tells a self-contained story that feels like it has a genuine beginning, middle and an end, it does so by referencing events outside of the experience of the game itself which undeniably strips away moments of significance. 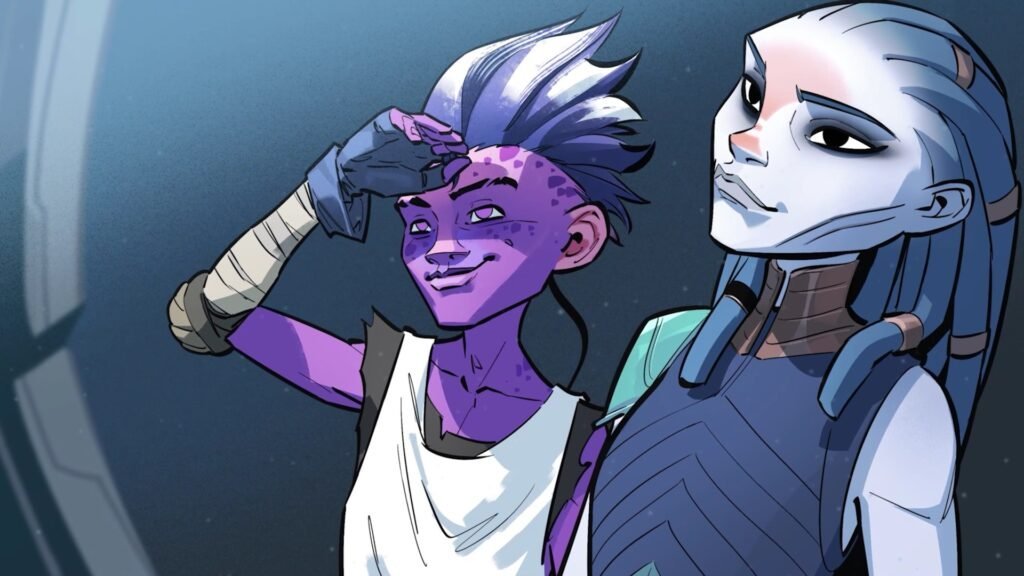 Playable solo or co-operatively with one other player via local split-screen, players embark on an adventure comprised of twelve missions spread across three planets. Each planet is visually distinct and does a great job in establishing its own tone and identity when taking on the four missions attached to it.

Supernova gradually introduces new concepts and gameplay mechanics at an accessible rate. Combat is simple, tied to a melee strike and ranged attacks. With story progression players will unlock upgrades that can be purchased with crystals that are found throughout every mission. These upgrades are tied to increased stats and performance for each characters arsenal. 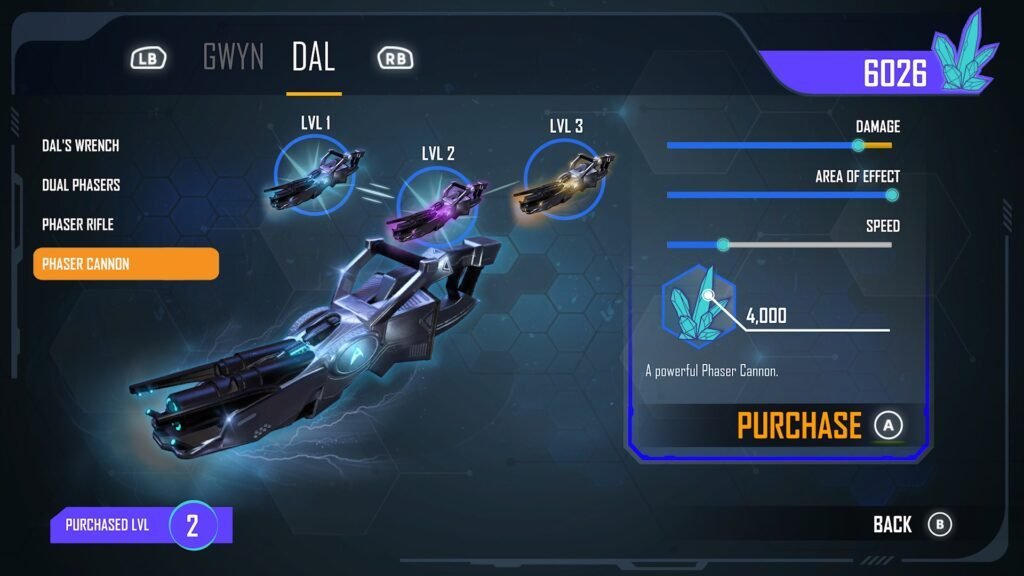 Traversal is very simple, players can run around and use a dash manoeuvre to cross small gaps or can interact with certain ledges to climb platforms. Coupled with the simplistic combat system, the general gameplay mechanics of Star Trek Prodigy: Supernova are fairly accessible but the depth may not satisfy older, more experienced players in the same way. 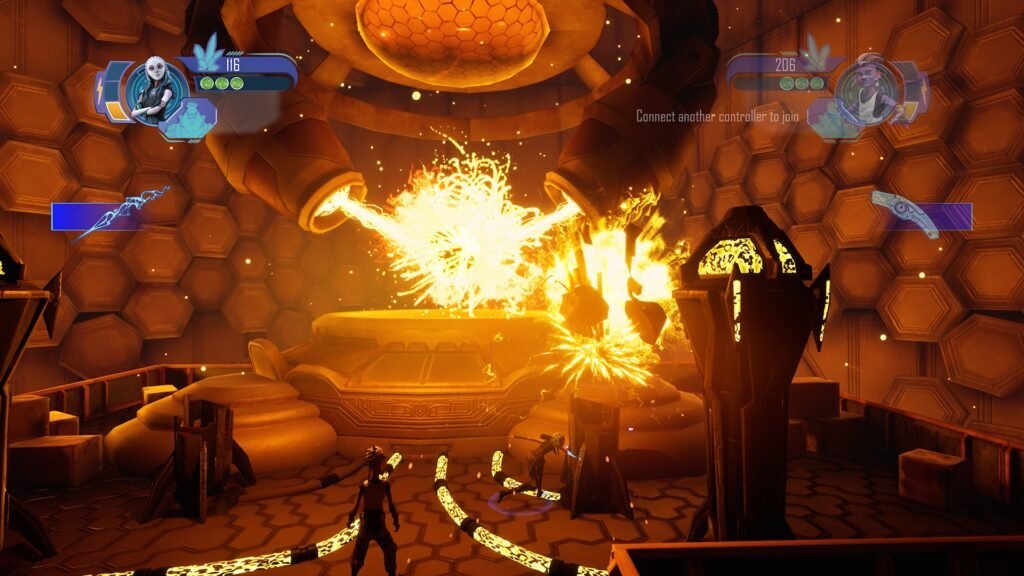 Melee combat is tied to a singular button while ranged combat is tied to a trigger. These ranged attacks will slowly fill an overheat bar that decreases automatically when ranged weapons aren’t used in quick succession and if the weapons do overheat, a brief cool-down will occur before it can be used again.

The enemy forces that will swarm Dal and Gwyn are known as Watchers, and they are represented by a variety of variants that each attack in unique ways. Some are melee focused while others are ranged, have powerful lasers, perform charged attacks, explode upon defeat and damage anything within a short radius or have healing areas that regenerate health for anything in close proximity. Various visual indicators and cues can be observed to understand the attack patterns and learn which Watcher performs which type of attack. If Dal or Gwyn take too much damage, they will need to be revived by the other with a simple button prompt. 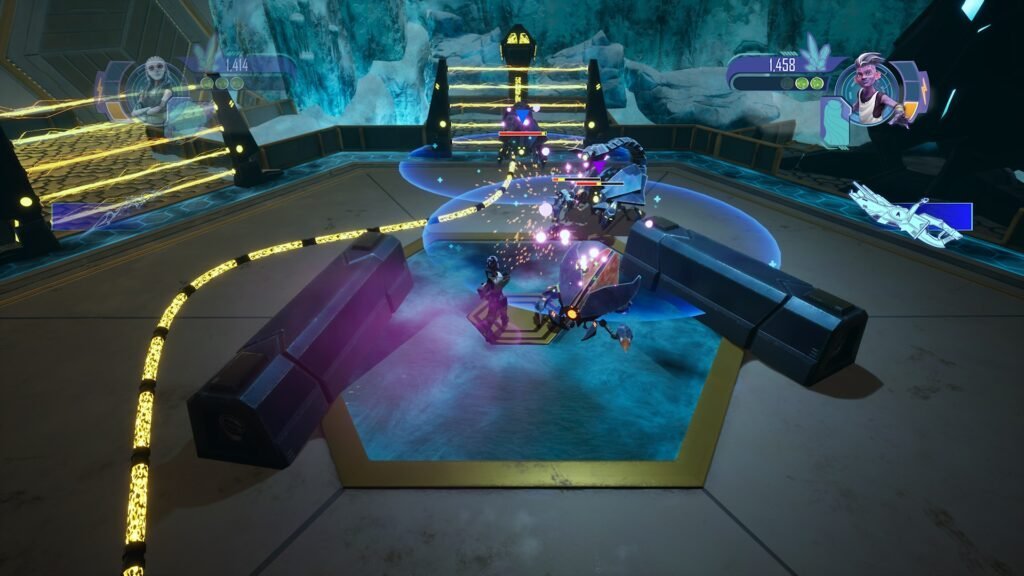 Gwyn is more proficient with melee combat and can perform charged melee attacks that Dal can’t. Outside of combat Gwyn can create bridges with her melee weapon at specific places that Dal can climb on and cross, she can block laser beams, interrupting them and allowing Dal to pass behind her without taking damage. 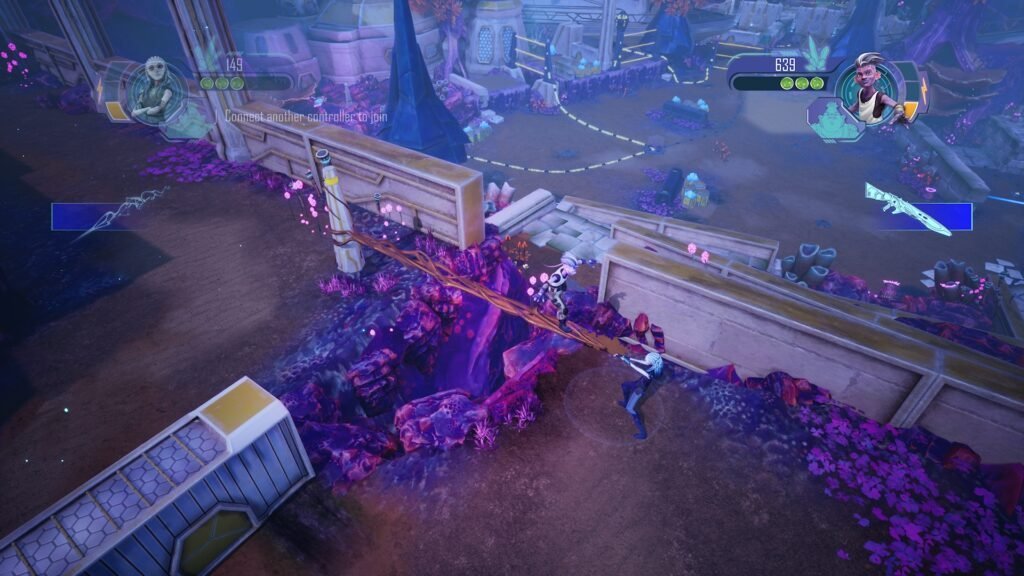 Dal is more skilled in ranged combat and is able to shoot longer before his weapon overheats. Like Gwyn, Dal has unique abilities outside of combat. Dal is able to lift debris that Gwyn can crawl under and he is also able to activate his chameleon ability to turn invisible and avoid motion detectors. 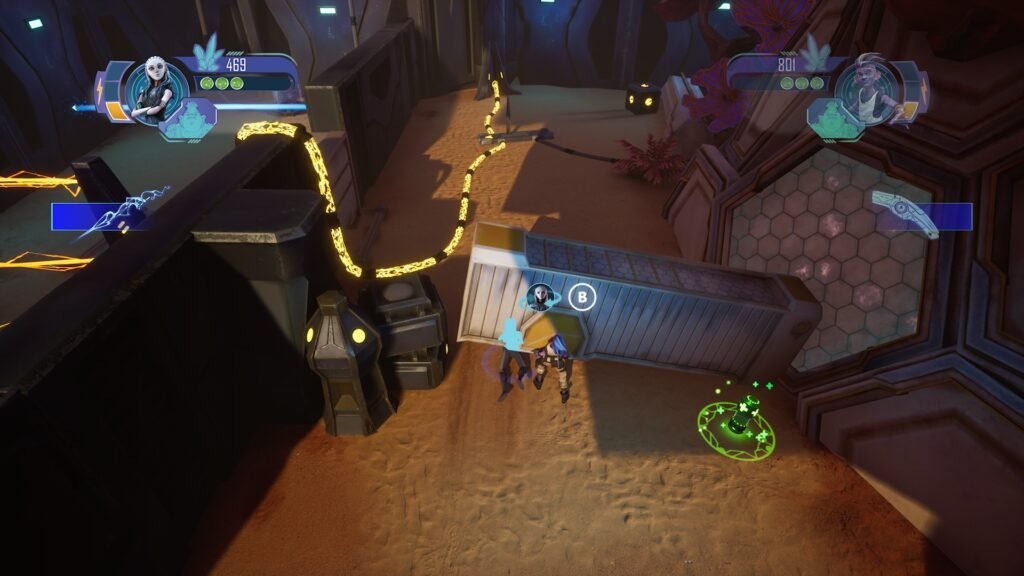 For both Dal and Gwyn, their non-combat abilities are essential for story progression and solving puzzles. They are simple to understand, execute and identify when and where they are required.

If the player needs a hint of what direction their objective is they are able to use the Tricorder by simply tapping the left trigger. This highlights important objects and indicates the path with a waypoint. When there are paths present that go in a direction different to the Tricorder, this could either be a path that will become accessible later or simply an alternate path full of secrets or collectibles such as the Punnies, bunny-like alien creatures, plants or relics.

Each mission has a combination of Punnies, plants and relics to find and collect, some can only be accessed by using abilities of crew members not unlocked until later missions, meaning these missions will need to be replayed later.

Environmental puzzle solving is introduced in the opening mission and is increasingly relied upon to extend the length of missions with story progression. An assortment of puzzles and components are gradually introduced such as interacting with power cubes to power up cables and doors or power down by removing them, using switches to direct the flow of power and moving large boxes to shift the flow of a light beam to open doors and deactivate light gates for instance. 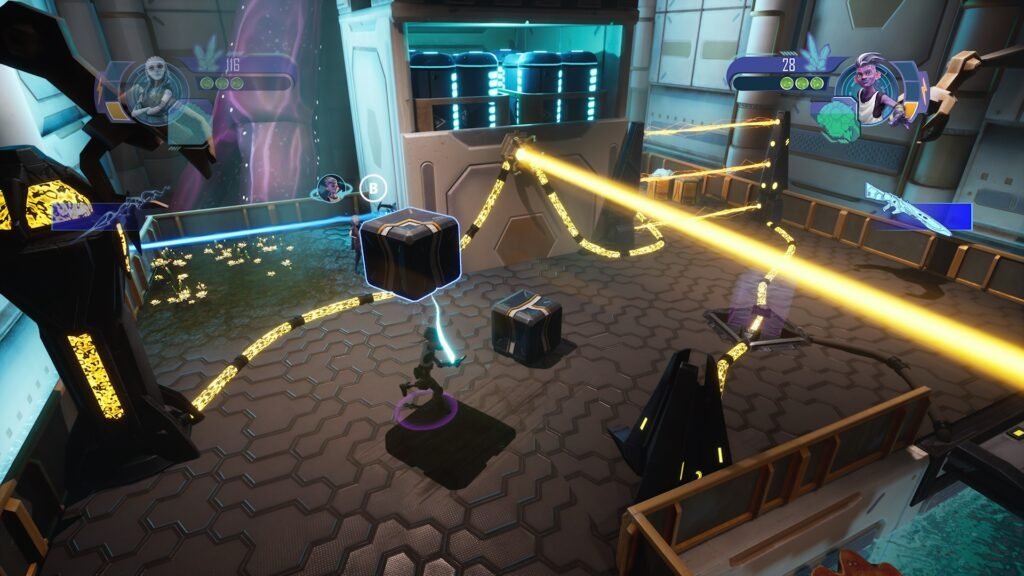 Initially the puzzles are pretty simple and short but as the game gets deeper they become increasingly longer and more complicated. Repetition sets in all too fast with the puzzles and it very quickly becomes apparent that solving puzzles dominates the core gameplay. Early missions take about 25 to 30 minutes to fully explore while later missions can take 40 plus. The missions feel unnecessarily bloated by puzzles and unfortunately this feeling sets in very early. The frequency, length and complexity of the puzzles and lack of a hint system I feel are likely to alienate younger players, possibly being too difficult for some and since they are tied to story progression, I worry this may prevent some players from even finishing the story. 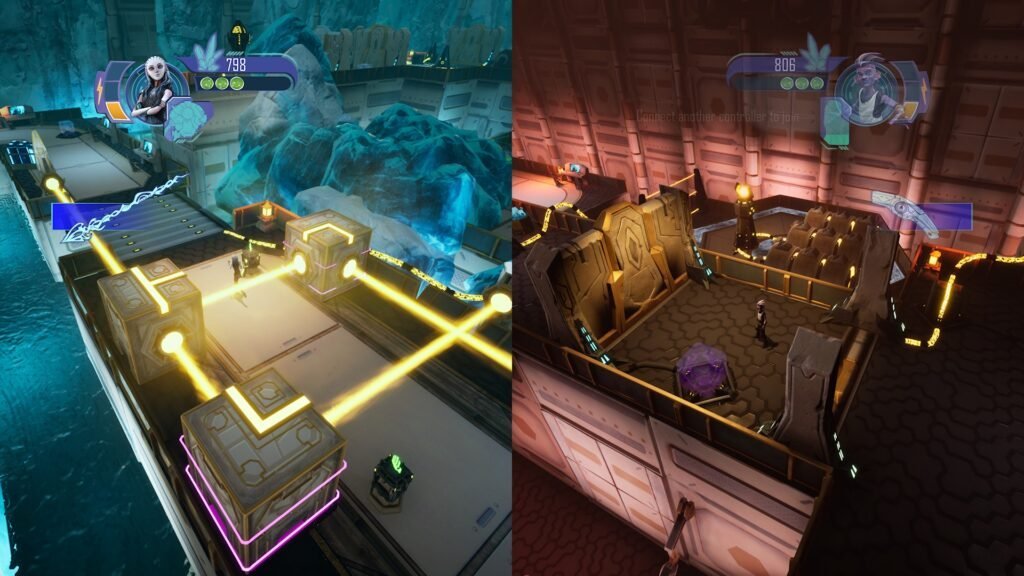 At the end of each mission the player can be awarded up to three badges based on their performance in certain aspects. A Time Badge is awarded for completing the missions within a certain time frame, a KO Badge is awarded for finishing the mission by being knocked out less than a defined amount of times and finally a Mineral Badge for collecting a specified amount of crystals. Unfortunately, the badge requirements are only shown at the end of the mission and can’t be viewed again in any way before, during or outside of a mission with the sole exception of at the very end of that mission. Completionists in particular will have a tough time managing thorough exploration within a time limit they can not see. Collecting all of a particular Bade type are cheats which may incentivise players and make any subsequent playthroughs a little easier. 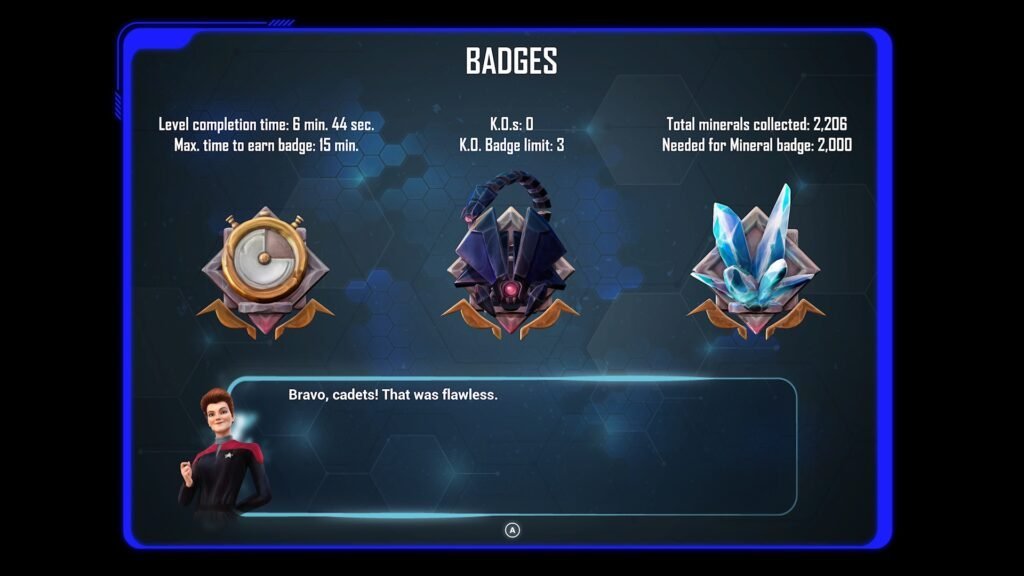 As the story progresses, four members of the Protostar crew are individually rescued. These members can perform unique interactions at certain parts of missions, encouraging replayability by revisiting earlier missions where these characters were not unlocked but their skills are required. As with all four of the rescuable crew members, they each offer a unique way to reach previously inaccessible areas and have a unique combat ability that can be triggered such as increased damage output or damaging enemies over time. 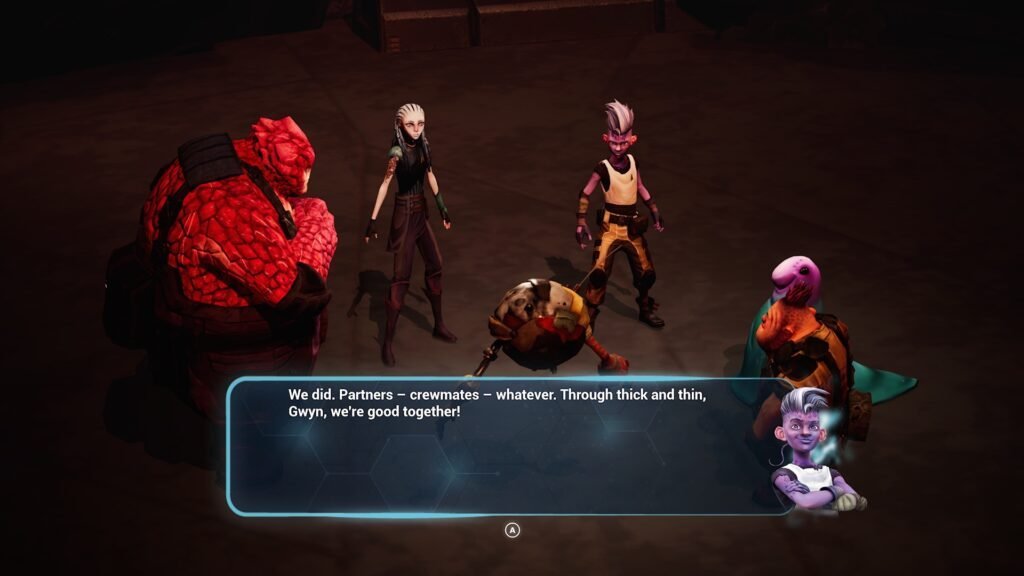 Dal and Gwyn can each select an ally ability to trigger at the start of each mission, either the ability activated upon any melee or ranges attack after filling a meter that is powered simply by inflicting enemy damage. The effectiveness of these ally abilities can be improved by completing up to two unique crew missions that can be accessed in the Protostar in between missions. 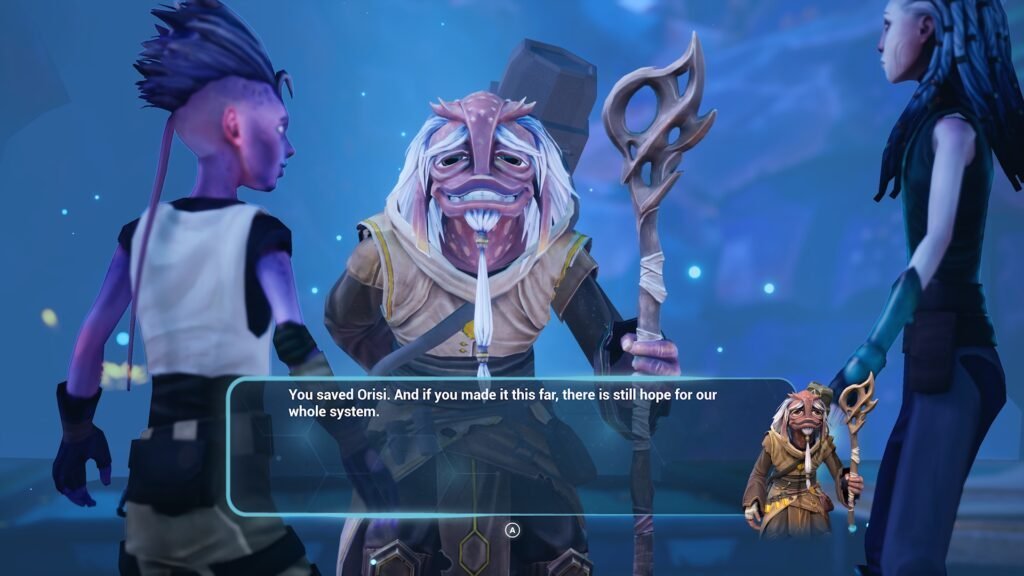 With a visual direction that serves as a faithful companion to the animated series that this game takes place in, Supernova has a charming visual identity that can be immediately associated by fans of the show. For newcomers, there is still a general Star Trek vibe that is given off by the characters and world design that playfully says “this is Star Trek”.

The score does a surprisingly excellent job at shifting tones and establishing themes of wonder, tension and drama. Playful sound design keeps the sci-fi elements ever present during combat and exploration. 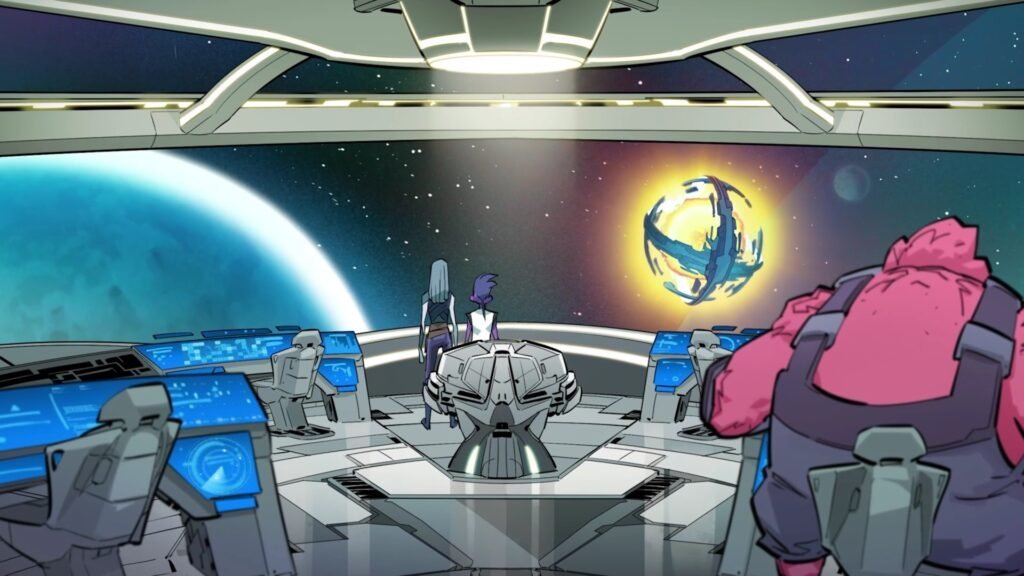 Tessera Studios have done a great job developing Star Trek Prodigy: Supernova in a manner that is visually similar to the animated series that it takes place in. The story is interesting, even for a player who is not familiar with Star Trek but for players who haven’t seen the animated Star Trek Prodigy series however, there are story elements, mostly on a character level, that are referenced and seemingly important but are never explored or explained in depth during the actual game.

The increasing reliance, length, complexity and frequency of the puzzles very quickly eliminates any sense of pacing and creates a frustrating experience that unfortunately gives the game overall a sense of overstaying its welcome. If the puzzles were dialled back and less prominent, Star Trek Prodigy: Supernova could shine a lot brighter.

+ Variety of abilities to unlock

– Puzzles get too long, too frequent and too complex, especially for younger players