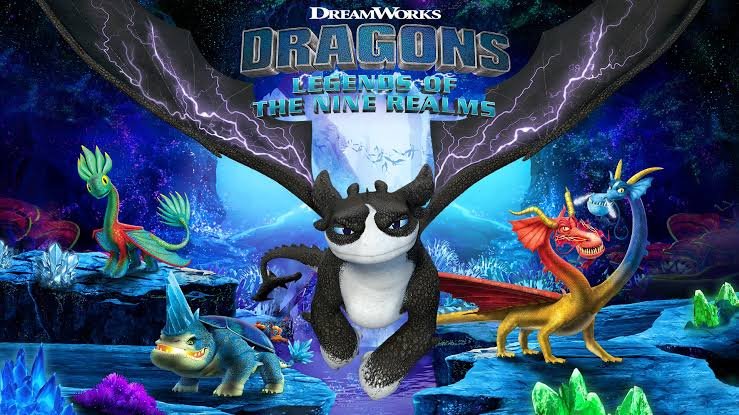 Reviewed on Xbox Series X | Written by Games of DAYNE

Dragons are many things to different people. They are exciting mythological creatures that cover a broad spectrum of appeal that ranges from magical, fantastical presence to apex predators that epitomise challenging boss battles in a wealth of video games and even charming, almost pet-like lovability as found in countless films geared towards children. Perhaps the most notable franchise of the latter is DreamWorks’ Dragons and the numerous films and television series that have spawned since 2010’s animated hit How to Train Your Dragon.

DreamWorks Dragons: Legends of the Nine Realms is based on the Dragons: Nine Realms animated series that launched last year and stars a quartet of lovable dragons to unlock and play through 25 stages, telling a simple yet touching story with Thunder at the heart of it. Thunder has lost his family and must embark on a dangerous journey through five realms to be reunited. With each new dragon that is unlocked comes their suite of unique abilities and move sets to add variety to this single player experience, offering the ability to freely switch between Thunder and his unlocked friends throughout each stage.

Light puzzle solving, combat and exploration for hidden secrets will keep players of all ages entertained as they strive to reunite Thunder with his family and upgrade their team of dragons along the way. Boasting the visual charm of the screen franchise, DreamWorks Dragons: Legends of the Nine Realms is a faithful and genuine joy.

The story kicks off with the passing of a comet that upsets the natural balance of the Hidden World and unleashes a series of devastating tremors that separates Thunder from his family. Thunder is the hero of this tale and as such he is the first playable dragon that is introduced. As his name suggests, he possesses electric elemental abilities such as lighting strikes. The fire breathing Plowhorn, icy dual-headed Mist Twister Wu and Wei and sonic blasting Feathers are gradually introduced as playable dragons one at a time at the end of each realm. As with Thunder, they each bring their own elemental skills and combat to the playing field that are also required for unique elemental puzzles littered throughout each stage. 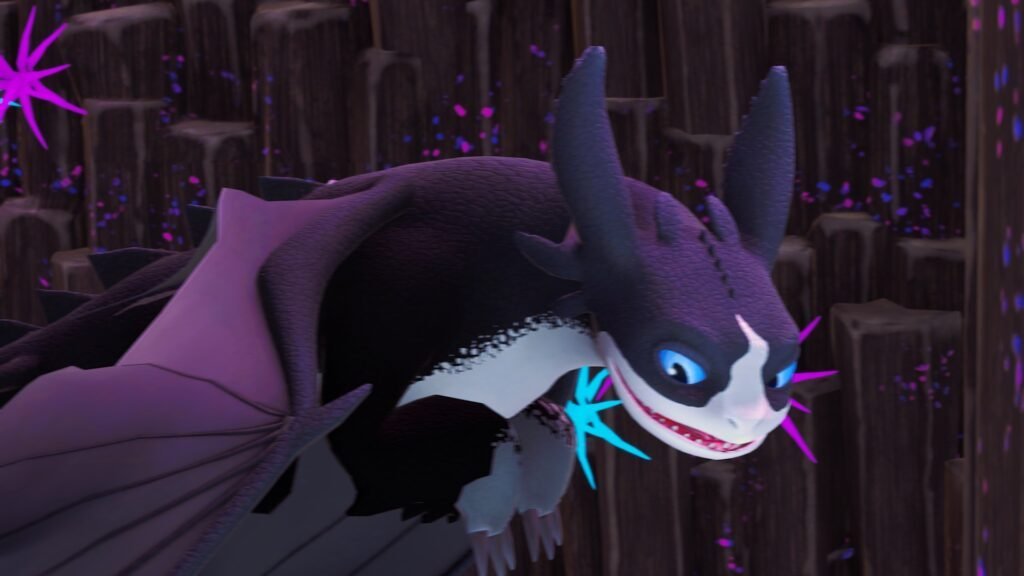 Told through narration and brief cinematics throughout each stage, the story unfolds at a steady pace that introduces new threats, friends, mechanics and challenges that keep it interesting and touching.

Spanning a total of 25 stages across five realms, each with five stages, the last of which is a boss battle, Thunder and friends can complete the adventure in around five-to-six hours. 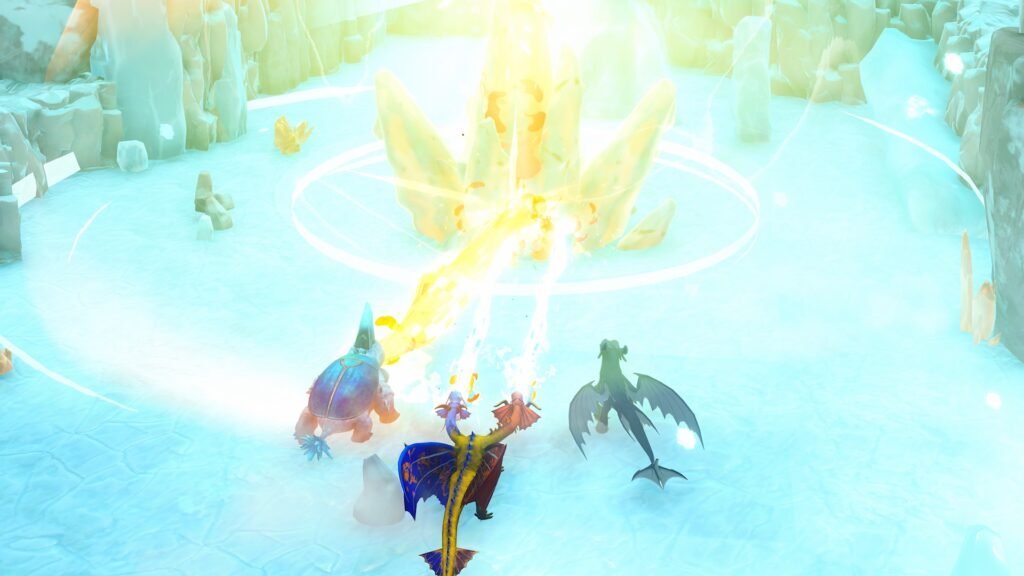 Each new gameplay mechanic is cleverly covered via tutorials as they are introduced, the regularity of which is surprisingly generous, opening alternative ways to play and explore that prevents repetition from sinking its claws into the players experience.

Giant elemental crystal structures require activation at certain parts of each stage, colour coded and identifiable by the elemental symbol up close to easily assist the player with selecting the right dragon for the job. Thunder’s electricity activate the white crystals, Plowhorn’s fire triggers the red crystals, Wu and Wei use ice for blue crystals and Feathers sonic blasts the purple. 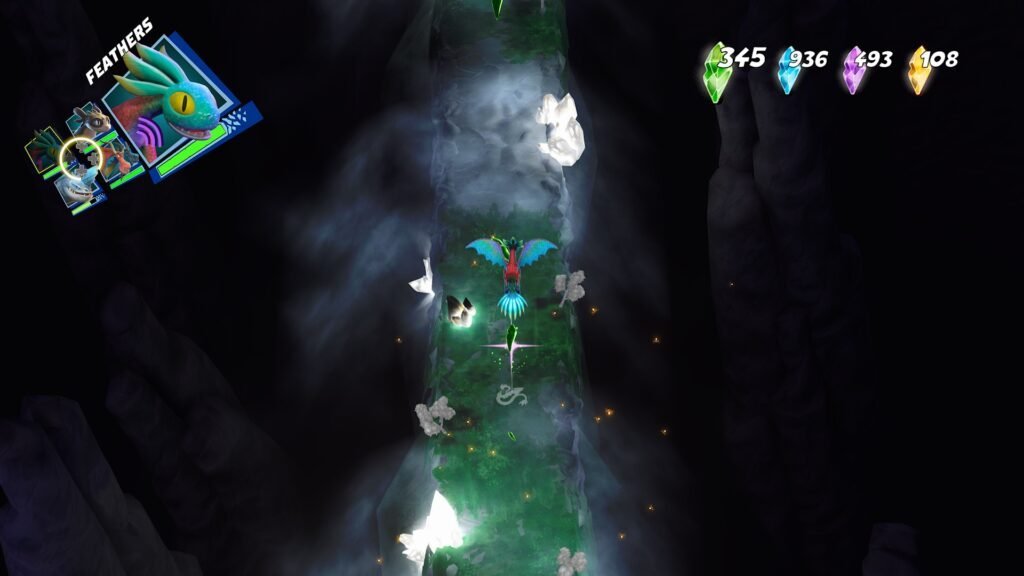 Along the way players will find small rocks that are decorated with the same coloured, elemental crystals that can be destroyed, rewarding the player with crystal shards that are required to upgrade skills for each dragon. Increased flight speed, evasion, damage output and other attributes can be unlocked for each dragon from the over-world at any time between stages. Defeating enemy dragons will also drop these shards, providing a regular flow to easily upgrade the dragons without asking the player to excessively grind. 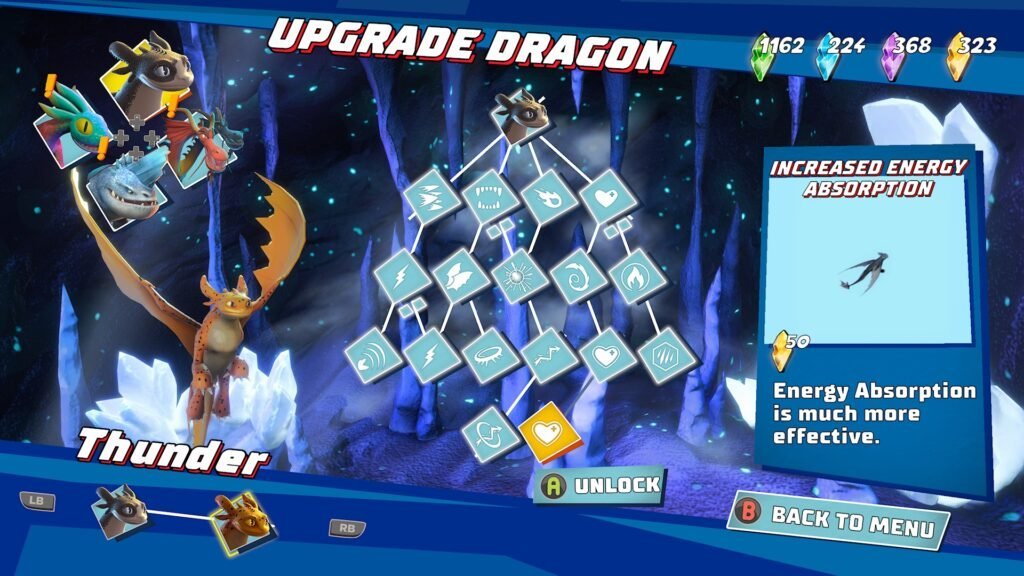 Despite having unique elemental abilities and move sets, all dragons can fly at will to traverse gaping chasms, reach higher plateaus and gain combat advantages. The flying mechanics are simple to control and lend to a more playful dragon experience. Though flight is an essential part of progression through the stages there is not an overwhelming verticality to complicate things, rather the flight is capped at a few feet above the ground, eliminating any concerns over difficult exploration or a sense of getting lost. The low flying gameplay keeps the environment within view at all times and this is likely to feel more enjoyable for younger players and keep the way forward clear. 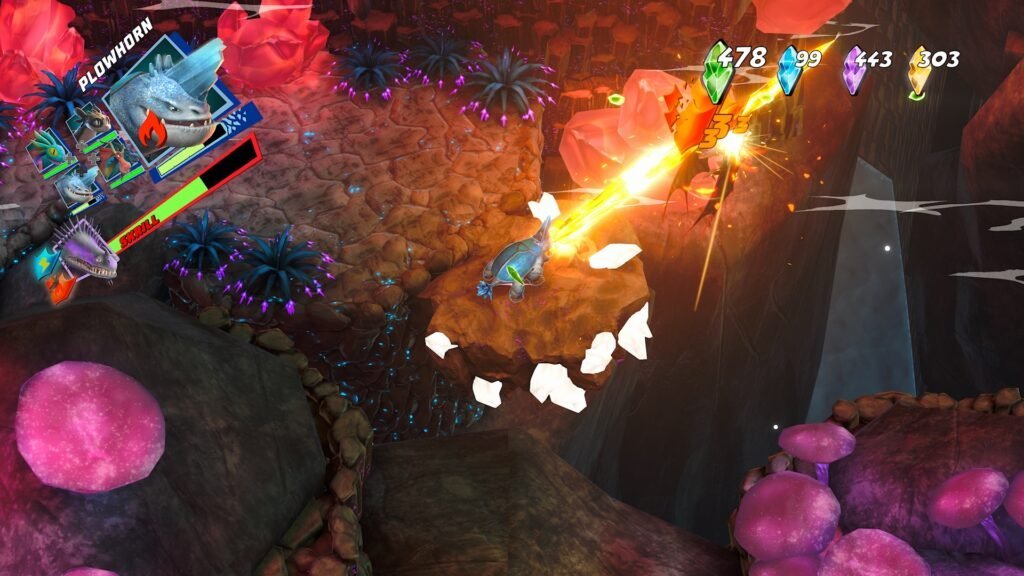 Each stage tasks the player with moving forward, activating giant crystals to open new pathways and a variety of enemies to defeat. They conclude by finding an enormous white crystal structure. There is an additional orange crystal structure hidden off the beaten track to find that unlocks the Challenge mode for each stage and these can often only be accessible by replaying the stage with new dragons in the team. The Challenge mode of the stages are more difficult and offer the orange crystal shards in greater quantity which are essential for fully upgrade each of the dragons. As this suggests, each stage is replayable at any time from the over-world, even stages where the later introduced dragons were initially absent. 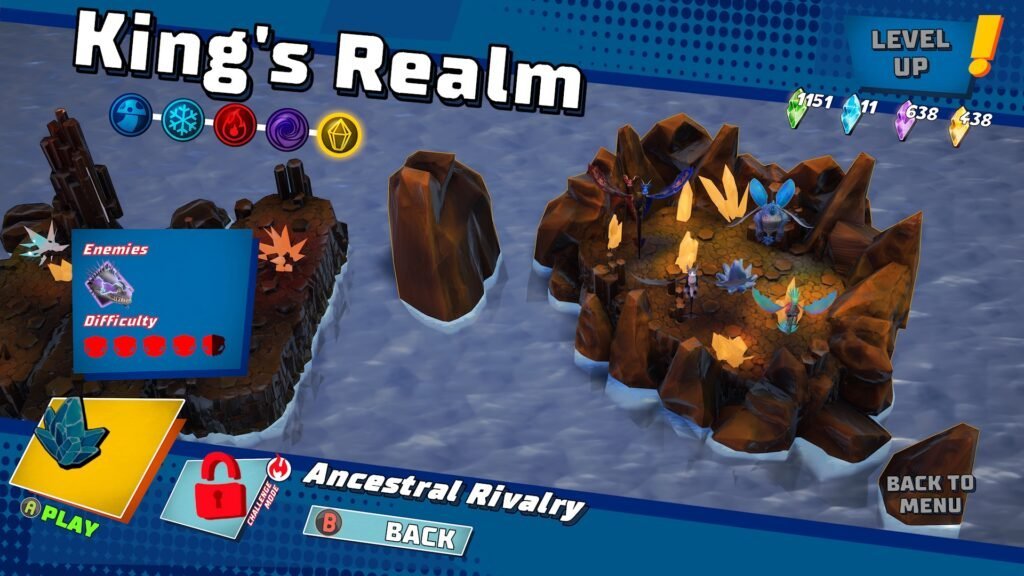 The five explorable realms each introduce new enemy variants and associated elemental abilities that must be taken into account. Plowhorn’s fire attacks do more damage to an ice type enemy for example while doing less damage against other fire types. This approach keeps combat encounters from being stale, hack and slash type affairs and encourages understanding the strength and weaknesses of each of the four playable dragons. If one of the players dragons is low on health or defeated they can be switched out to allow their health to regenerate. Team management is as simple as a press of a button on the D-Pad (Directional Pad) and health regeneration is generous, restoring dragons to full health in a matter of seconds.

Jumping, flying, evading, shooting elemental attacks and a light and heavy melee combat system full of combos is simple to learn, understand and balance. The difficulty of combat encounters is pretty generous and won’t punish younger players in particular. At various times throughout the stages a white barrier will enclose the field and a certain number of enemies need to be defeated in order for it to drop and allow the player to progress. These little arena sequences offer the most action as majority of the other enemy encounters can actually be avoided by simply flying past and ignoring them. 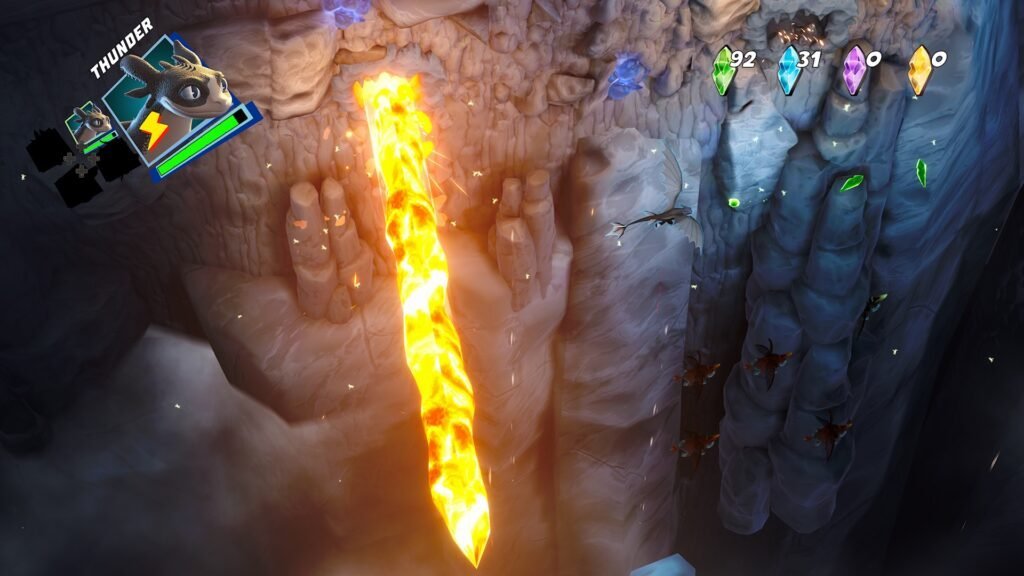 Matching the visual style and charm of its film and series counterparts breathes familiar and accessible life into the title that will allow the youngest of players to make a stronger connection to the source material. Each of the five realms feels visually distinct and the enemy variants are cleverly tailored to incorporate the unique surroundings. 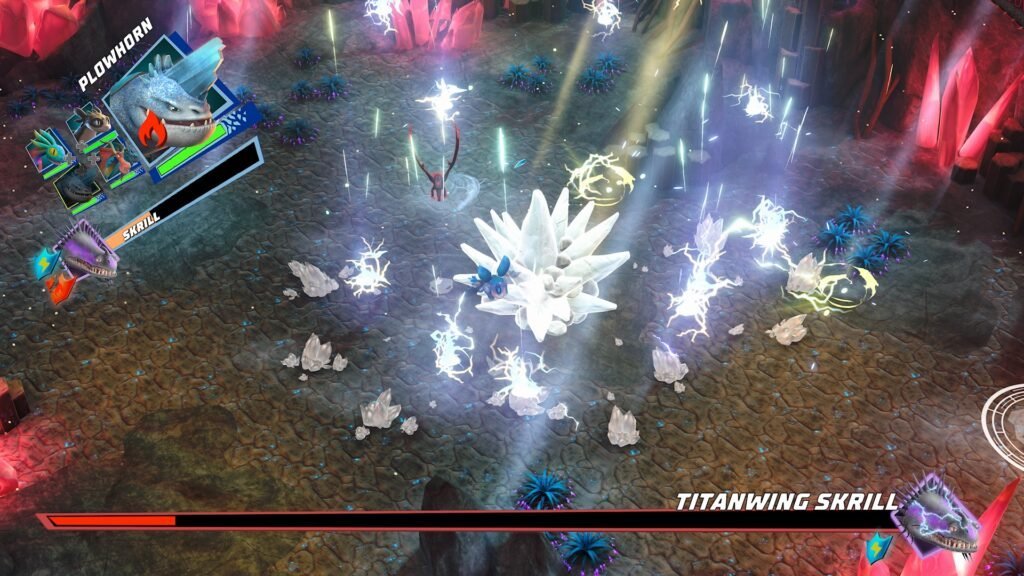 Developer Aheartfulofgames have cleverly crafted the experience to hit the nostalgic chords and deliver an approachable adaptation to the beloved franchise. The sound design is fun and endearing, delivering a score full of moments of tension and triumph that aren’t overly dramatic or mature. 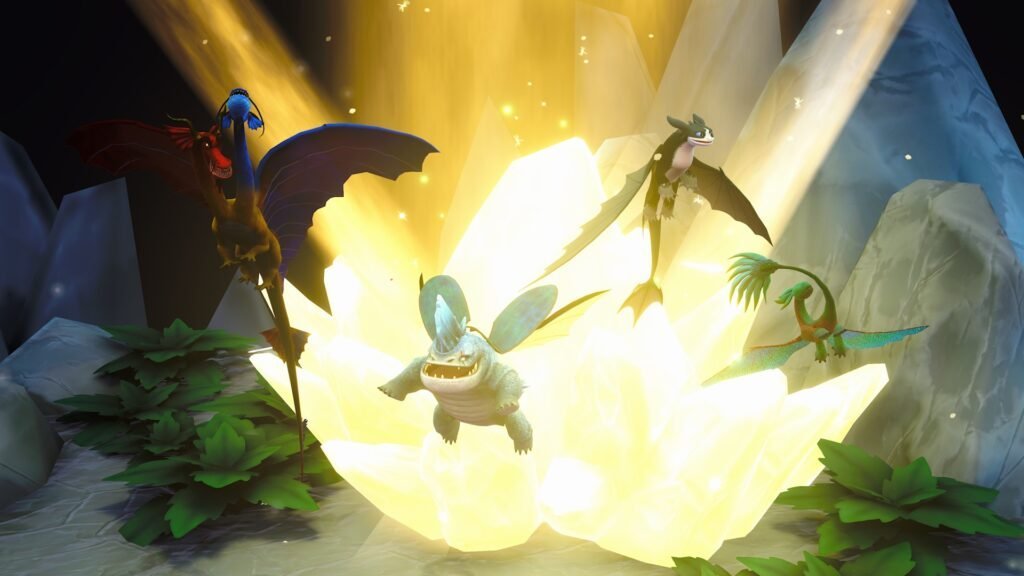 Outright Games have once again added a strong licenced adventure geared towards a younger audience to their publishing portfolio, further solidifying their position as the leading publisher of broad and oftentimes unexpected licences that manage to entertain older players in the process. An opportunity was perhaps missed to include local co-operative play and bring the family together but as a single player experience it still caters to a broader audience of the franchise.

DreamWorks Dragons: Legends of the Nine Realms is a genuine treat for those who have watched the animated series it ties into while also standing on its own as a self contained adventure the whole family can enjoy.

– Later stages are a little long