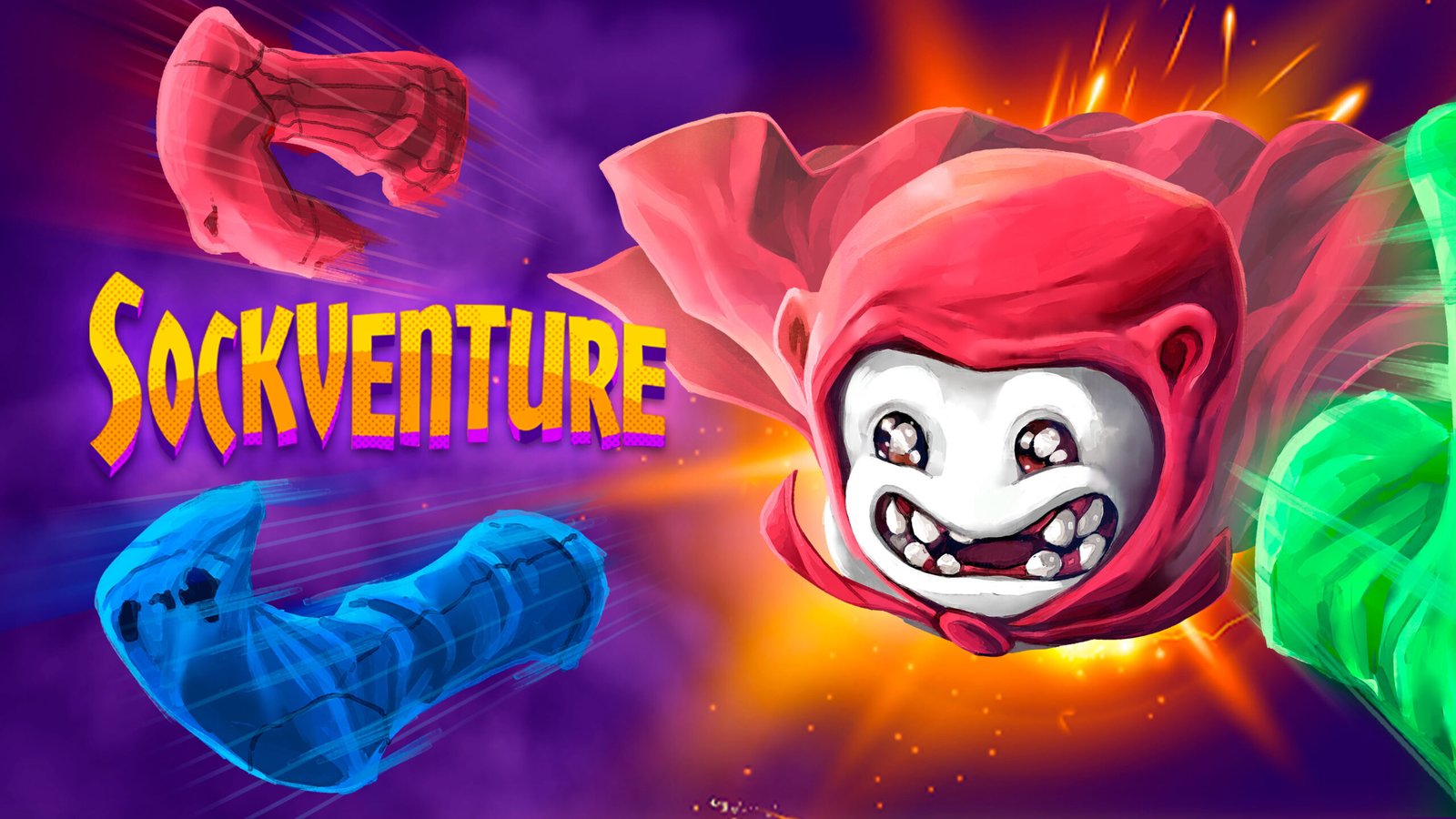 The premise of Sockventure is all too relatable for younger players. Being told to pick up after ourselves before we can play some more video games feels like a prison sentence when we’re young but becomes a normal part of growing up, and before we know it, we’re telling our kids to do the same. Taking control of a young boy to pick up his socks and run them through the washing machine, the mother says to use imagination while we wait for the washing to finish. Almost instantly, the wild imagination of the boy comes to life and the washing machine becomes a cursed and dangerous platforming playground for Supersock, a hero tasked with navigating the deadly and ever-changing interior of the washing machine to find the boy’s favourite socks. 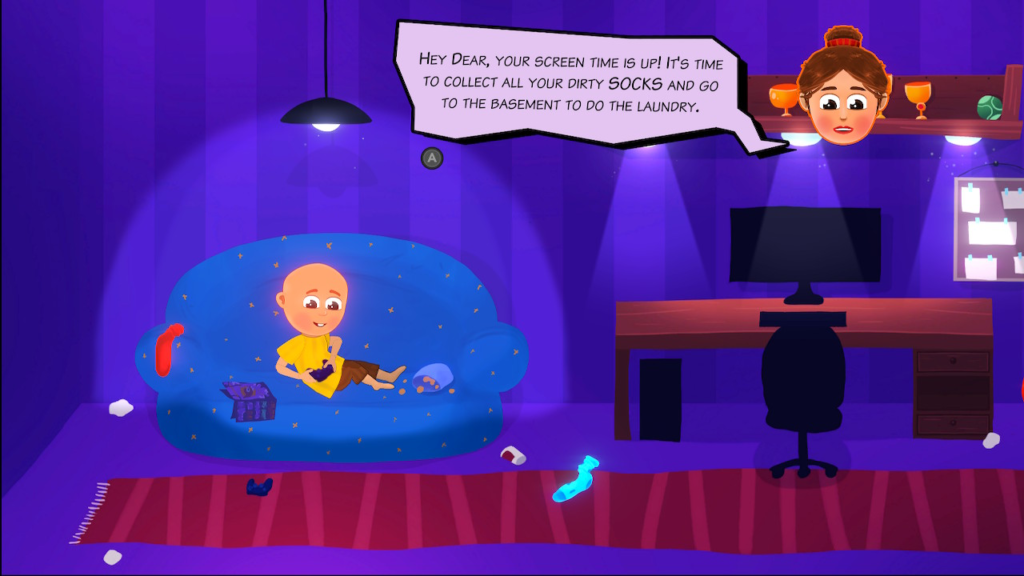 Packed with over 200 levels spread across seven chapters, and three bonus chapters, Sockventure requires players to master the precision-based gameplay to navigate and survive the wild world within the washing machine that the boy has developed. Sockhero learns new abilities throughout, is confronted by new challenges and obstacles with refreshing regularity and ultimately finds himself starring in a genuinely enjoyable and authentically challenging platformer developed by Nighthouse Games.

With the simple and comical premise established, Sockventure wastes little time in acquainting players with Sockhero and the ever-changing landscape within the cursed washing machine. Each of the seven chapters is comprised of multiple levels, transforming the inside of the washing machine into different states of deadly obstacle courses. A myriad of environmental obstacles and hazards such as spikes, saw blades, degrading platforms, flames and lasers to name just a few. Initially limited to simply running and jumping, Sockhero’s repertoire expands regularly with new abilities that include double-jump, wall climbing, dash and more. The frequency of new introductions to gameplay mechanics keeps things fresh, exciting and make runs a little easier, despite the proportionate increase in difficulty and obstacles to overcome.

Littered throughout each level are coins to be collected. Most are on the natural path but others are often placed in a position just dangerous enough to challenge the player with the internal struggle of “is it worth it?” At the end of each chapter, the player is awarded up to three gold stars. One for completing the chapter within a specific timeframe, another for collecting all of the coins and finally for completing the chapter without dying. Failure isn’t harsh, with the player simply being returned to the beginning of the level or to the nearest checkpoint that has been reached. Additionally, there is an option in the settings to increase the respawn points that. Help dramatically when some levels seem a little overwhelming. These additional points typically return the player to the nearest platform they were able to stand on instead. This accessibility goes a long way in allowing more casual platformer players to be able to push through instead of quitting in frustration. I am not ashamed to say I had to turn this function on around chapter four as the challenge had ramped up significantly by that point in Sockventure.

As the mission of Sockhero is to retrieve the missing socks after the cursed washing mission ate them in the beginning, once they are found they act as skins that the player can switch between at any time to provide a new look for Sockhero. My personal favourite is found early on, planting a banana on Sockhero’s head. This is a simple yet nice touch to award the player with something other than the satisfaction of overcoming the heavy trial-and-error based nature of the gameplay. The controls are great and very responsive, considering the precision required to navigate the levels this is excellent news when compared to the plethora of other indie titles that struggle to nail the responsiveness of the controls which leads to frustrating failure. The trial-and-error style of the gameplay is much more tolerable as a result, and the solution is typically evident, it’s the execution of the player’s timing that will determine success. Given the generous amount of abilities and mechanics that are drip fed into Sockventure throughout the experience, the game never feels stale and after a few deaths the way forward becomes even clearer and more achievable. The colourful environments and flashy animations keep the action vibrant, entertaining and cartoonish to the point that its charm is able to motivate the player to push through, succeed and see what’s next.

While the difficulty is generally manageable with a few attempts and a more cautious approach to the calculation and precision required to navigate the death traps, Sockventure does feel like its greatest difficulty spike happens a little too early, around chapter three. When new abilities come soon after things do get easier but pushing the difficulty back a chapter or two until these abilities are acquired may have made the experience one that feels more gradual. 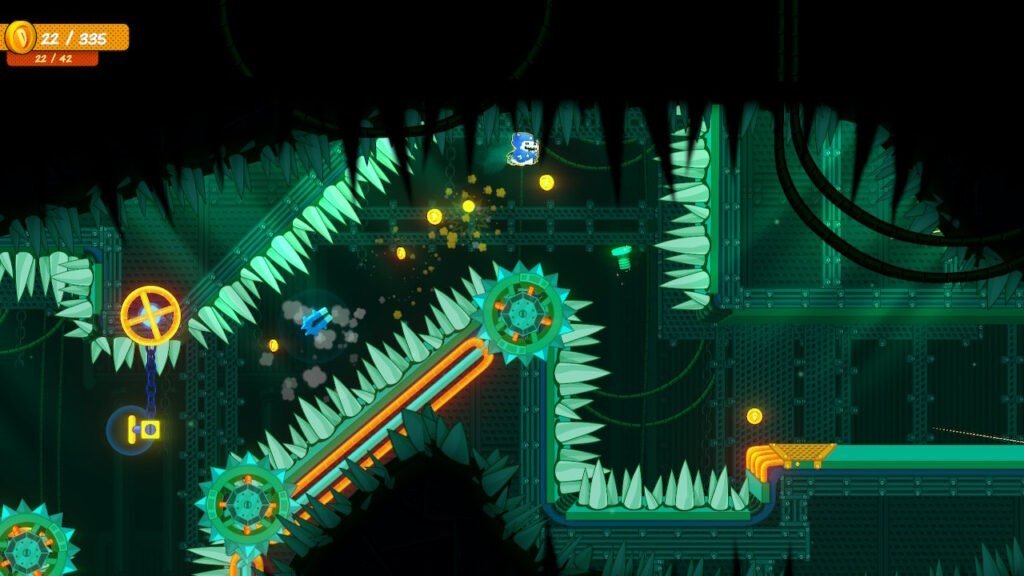 Sockventure is fun, challenging and wonderfully designed, offering a staggering amount of levels rife with enjoyable obstacles, cool costumes to unlock for Sockhero and satisfaction of overcoming what may seem at times as impossible. Joyful visuals, fun stat tracking such as deaths and times, as well as a personal speedrun leaderboard, Sockventure is highly replayable for those players that enjoy seeing how fast they can complete runs with minimal or no deaths. Published by: Versus Evil