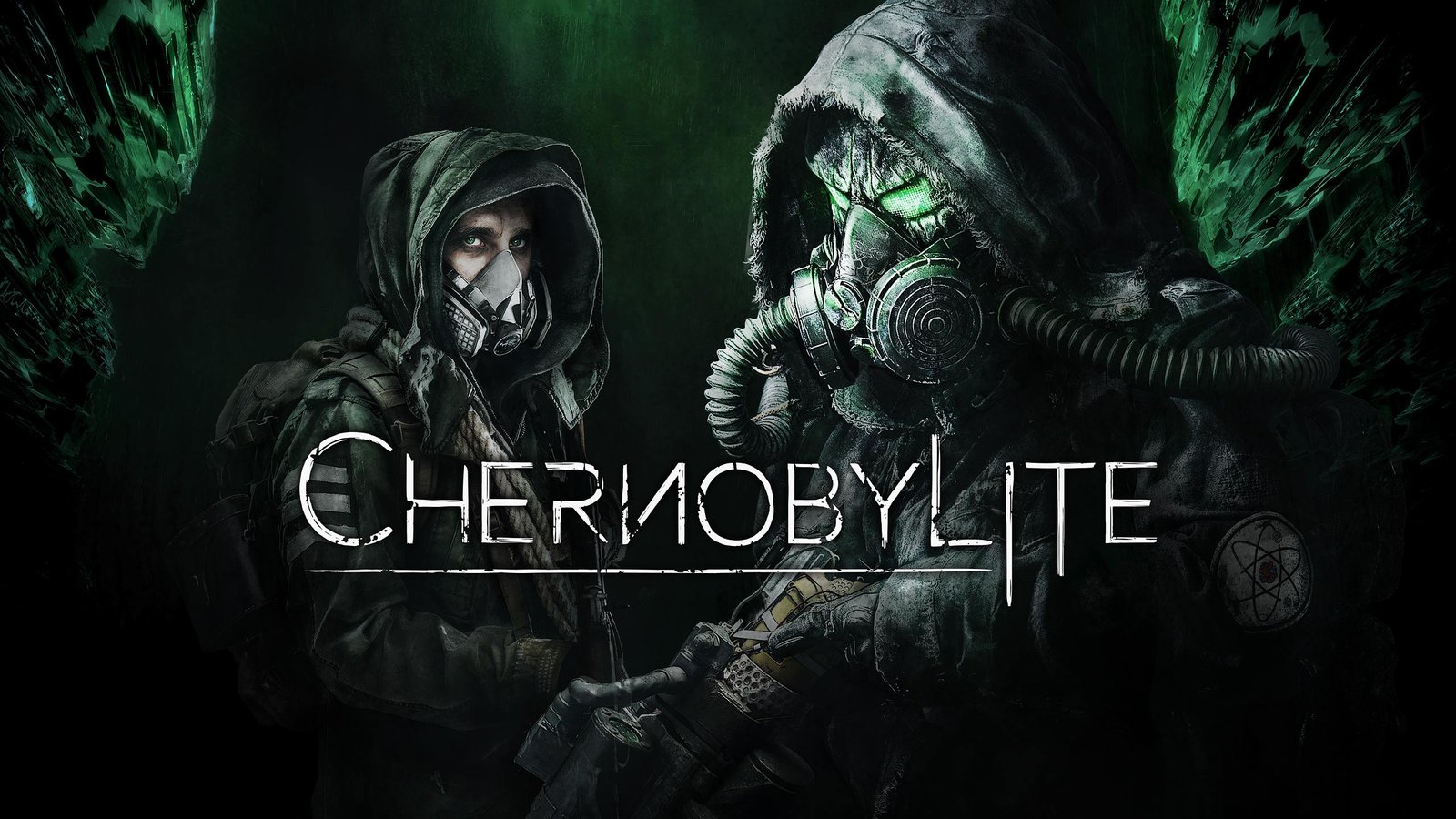 Written by Games of DAYNE | Reviewed on Xbox Series X
The Chernobyl nuclear disaster of 1986 has spawned countless films, television series and video games, all putting a unique spin on the radiation riddled site in Ukraine. Developed by The Farm 51, Chernobylite is a survival horror experience that incorporates elements of base building, crafting, action, exploration and survival. The radioactive wasteland in Chernobylite is even more deadly thanks to the supernatural threats that have risen from the contaminated ruins.
The adoption of a non-linear approach to the storytelling provides optional quests to compliment the primary story arc, rooted in the titular Chernobylite crystals that have emerged in the wake of the devastation. Surviving the radioactive elements as well as the supernatural threats that loom, Chernobylite has all the ingredients for a deep and thought-provoking experience but manages to fall short in almost every department.
Played from the perspective of Igor, a former physicist and reactor employee, Chernobylite opens with Igor leading a small team to recover some of the Chernobylite crystals, exotic material that manifested itself during the explosion of the nuclear reactor at Chernobyl. Given the nature of the event and the location itself there is little surprise that the excursion doesn’t go according to plan and Igor finds himself alone, desperate to scavenge what he can from the radioactive wasteland in order to survive, upgrade his base and find new allies that share his daily quest to survive at all costs. 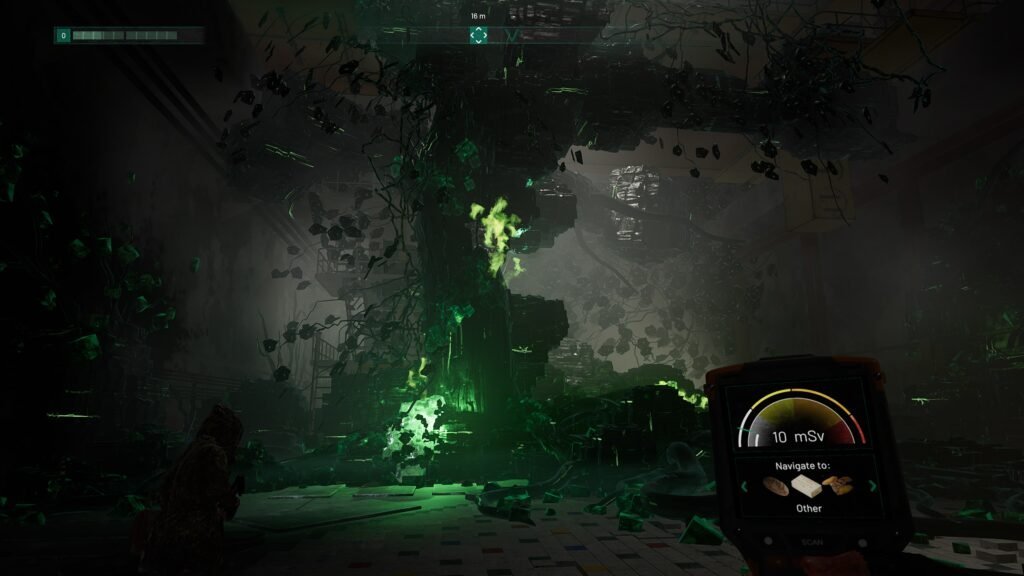 Chernobylite plays out in days. Each day starts with a variety of missions to choose from that offer unique rewards. Seeking out supply drops, searching for medicine or food or following leads on other survivors are just a few examples of the types of missions available to Igor. Only one mission can be completed each day and aside from story related missions, the mission board changes, offering up different rewards. This leads to Chernobylite certainly feeling a little more dynamic and engaging, prompting the player to carefully weigh up the value of the rewards.
Other than the primary objective, which is discovering what happened to Igor’s fiancé, Tatyana, who disappeared on the day of the incident, these missions are mostly inconsequential on a narrative level though remain critical to survival. Only with the resources obtained through this missions can the player effectively upgrade their base and find food and other essential resources to survive. 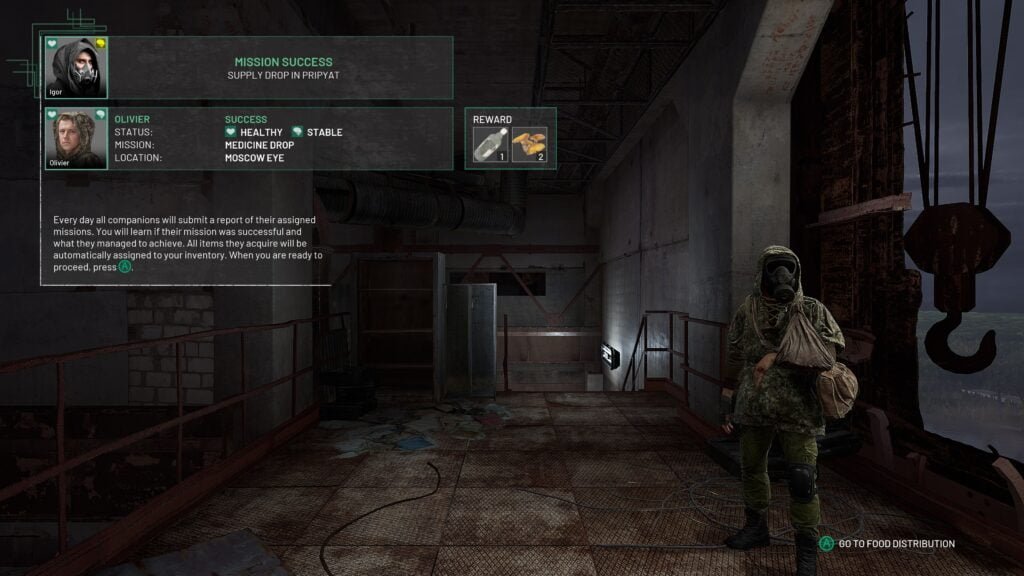 The radio soaked landscape is populated by mercenaries and supernatural monstrosities that offer up a genuine challenge in the earlier hours of the near dozen-hour campaign though the recruitment of allies certainly makes things more enjoyable and rewarding, especially when completing the training offered by some that provide upgrades to damage and resource scavenging for example. 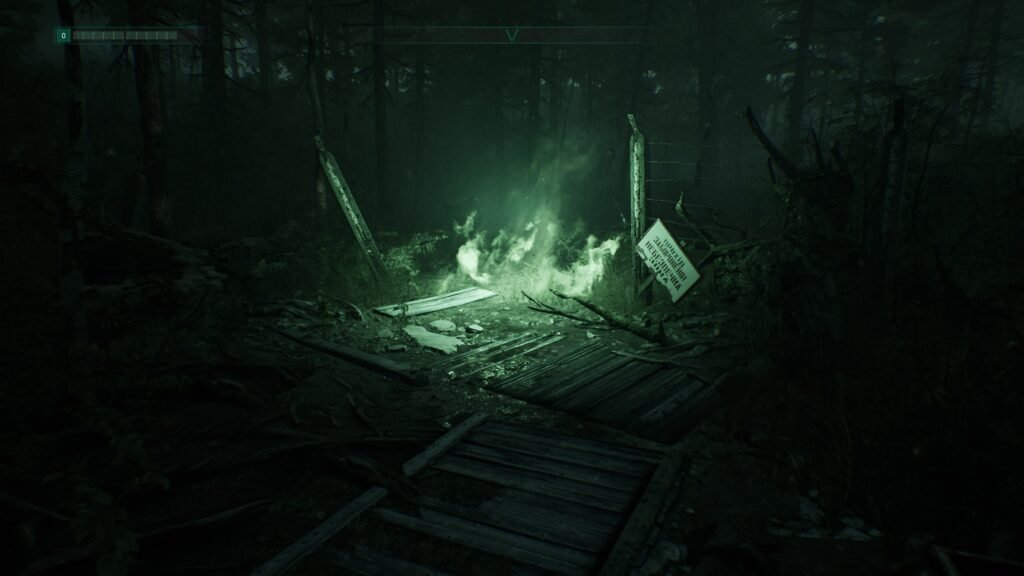 Survivors that join Igor’s cause and take up shelter at the base don’t come free so to speak, instead they must be taken care of in terms of hunger, they need to be equipped with decent gear to ensure survival and the many choices the player faces throughout the game will have consequences that affect their loyalty. In Chernobylite it can be easier to make a friend than to keep one. This companion management aspect makes sense considering the survival elements though it doesn’t particularly enhance the experience in a positive or productive way and it does slow the pace just enough to feel distracting.
Each of Igor’s newly recruited allies can be dispatched on their own missions, encouraging recruitment to be able to maximise the resource rewards required for survival during each of the in-game days. As for the player, the first person experience is largely centred on exploring the area, gunning down bad guys and scavenging anything and everything. Adopting a purely stealth approach bloats the missions but running in guns blazing is a quick way to get killed too, seemingly encouraging a healthy balance of both to keep the gameplay from feeling too slow or too dangerous.
On top of enemy location awareness, the player must also manage Igor’s psyche in an effort to prevent hallucination. This mental health aspect doesn’t feel as meaningful as it perhaps appears on paper as far as the gameplay goes though it fares a little better in the broader strokes of the multi-genre narrative. 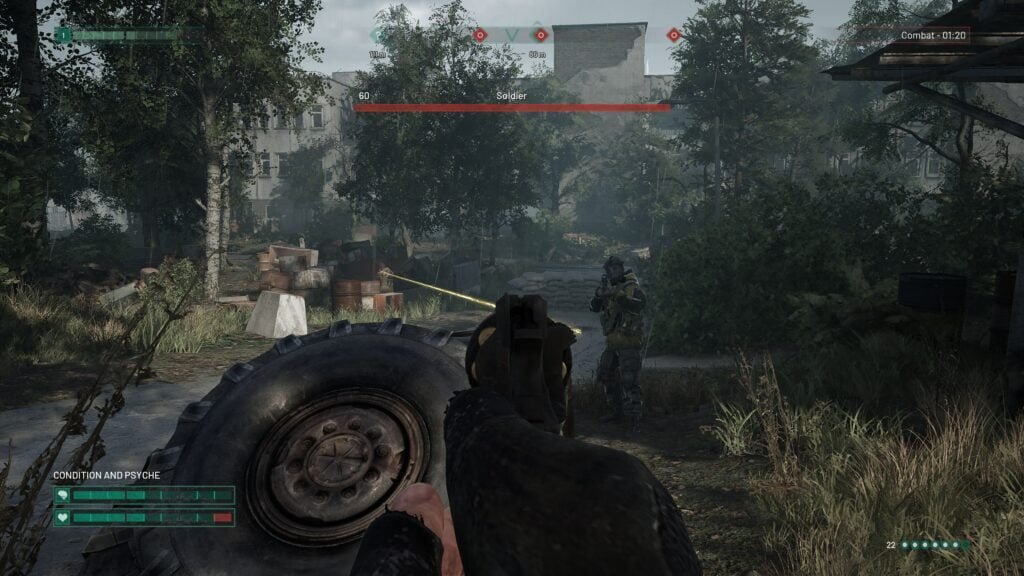 The end of each day leads to feeding the crew, upgrading the base to open up new crafting opportunities as well as crew satisfaction via bedding and air purification for instance. The variety of things to deck out the base with is impressive and players that take extra interest in this type of management gameplay have just enough more content to further satisfy them. Personally, I only invested in what I needed to keep the morale high or upgraded workbenches to open up the possibility of new weapon/gear crafting. Some stations that can be constructed allowed for lock-picks and med-kits to be crafted for example, essential items for maximum exploration.
Unfortunately, Chernobylite ultimately mashes a bunch of ideas together that just don’t feel as cohesive as they could. The resource and companion management doesn’t feel particularly meaningful or interesting, the base building is cool to experiment with but isn’t necessarily essential to survival or enjoyable to explore. These all grind the already suffering pace to a halt and diminishes the enjoyment of longer play sessions. The story is quite interesting though it too feels bogged at times when locations are revisited as often as they are. As far as the horror aspect goes there is very little to report in terms of horrific content and perhaps the scariest part of Chernobylite, in my personal experience playing on Xbox Series X at least, are the plethora of technical issues.
Several times per mission the sound effects would disappear entirely, leaving my rifle fire on enemies producing as much sound as the air guitar I keep beside my couch, the lag-like experience or constant half-second freezing that would occur for seemingly no reason all intruded upon my time with it in ways that rendered my experience unenjoyable for the most part. Trying to time jumps was a nightmare with the constant brief freezing moments or hearing which direction gunfire or other menacing threats were coming from were near impossible at times. 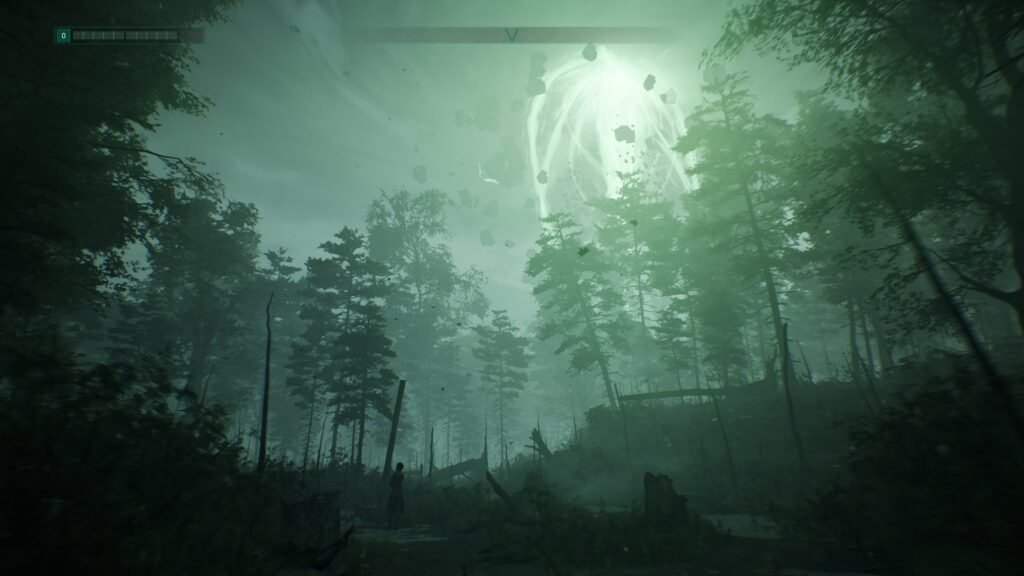 The visuals are impressive and the world has been brought to life in a fashion that I would expect to see were I to actually set food in the historic zone. It looks faithfully worn and decayed with a haunting sense of abandon at every turn. Elevated by atmospheric tension that is wonderfully established with effective sound design, the overall presentation is immersive and exciting, mysterious and desolate all at the same time.
Chernobylite looks and feels great, tells an interesting story that manages to pull of the inclusion of the supernatural elements and the gameplay generally feels competent at least. The management aspects and base building don’t really compliment the overall experience, feeling more like a distraction than a necessary addition. The variety of missions to take on and new people to recruit though do encourage replay value and reward exploration. Whether the technical issues that plagued my experience extend to all, some or no other players is not clearly known to me, it’s difficult to ascertain how much they hinder the overall experience. 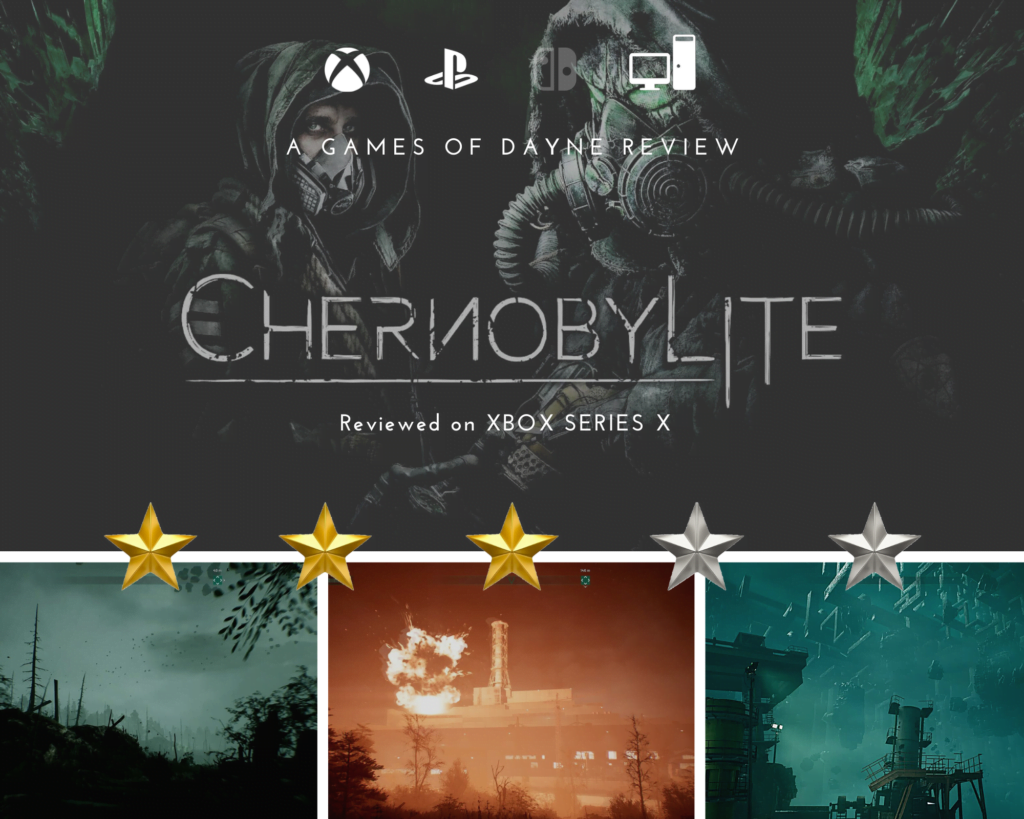 Developed by: The Farm 51

Published by: All In! Games

All digital photography was captured in-game by Games of DAYNE on Xbox Series X
Tags: All In! Games, Chernobylite, Games of DAYNE Reviews, PC, PlayStation, The Farm 51, Xbox