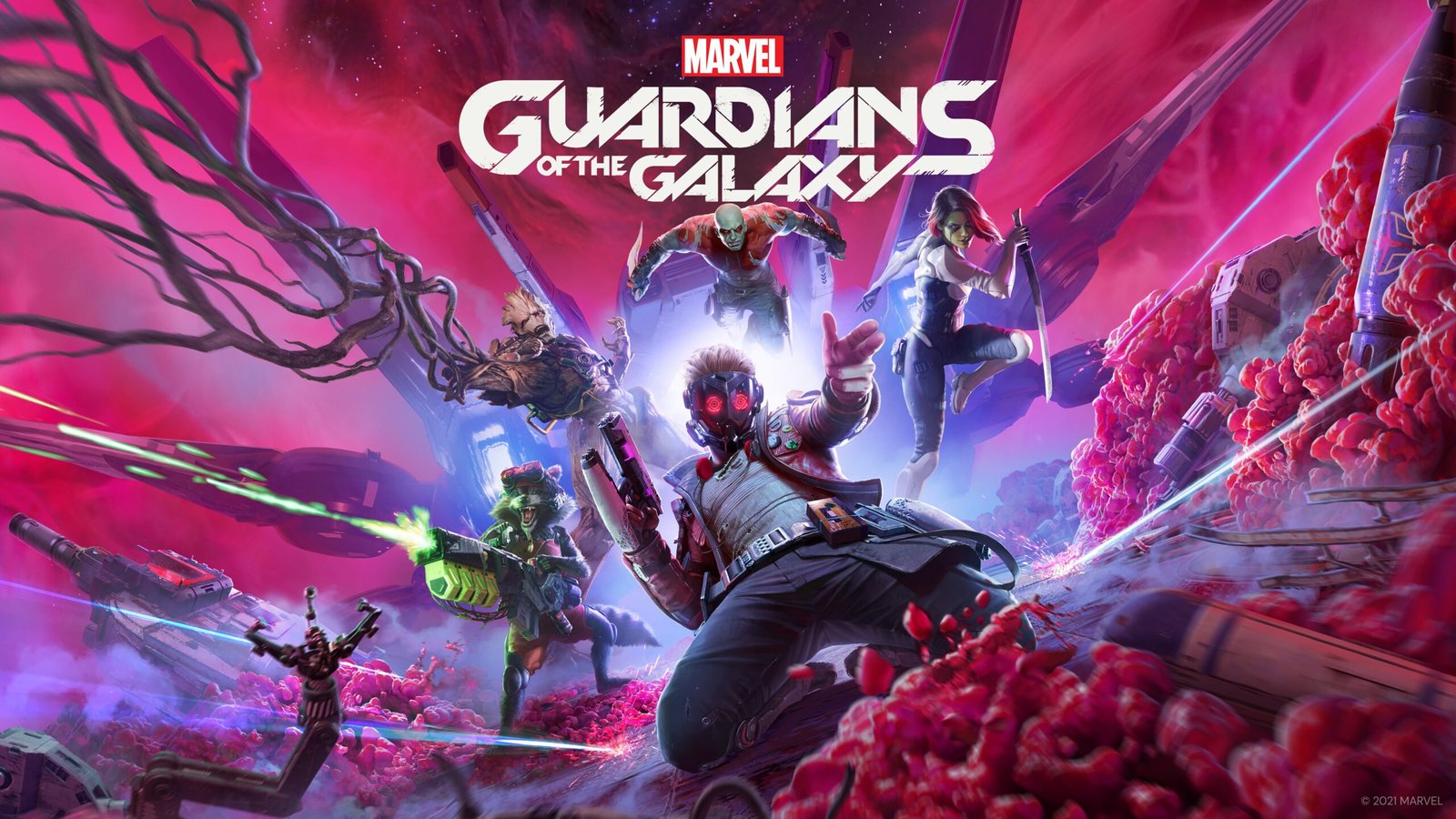 “We got this. Probably.”

The titular Guardians of the Galaxy happen across a threat of cosmic proportions as their journey, initially rooted in a lighter, mischievous situation appropriate to the ratbag shenanigans they’ve become known for, goes awry. Eidos Montreal have masterfully developed an adventure that interweaves the intimate, close-to-home personal struggles of each member of the team with a scheme that has diabolical consequences for the entire galaxy.

Blessed with choices that impact the narrative, and affecting the individual Guardians as well as the team overall, Marvel’s Guardians of the Galaxy takes players on a cosmic thrill ride from the playable perspective of the uber-charismatic leader, Peter Quill aka Star Lord. Full of laughs, action and an unexpected amount of heart, the near 15 hour adventure is an absolute blast from start to finish.

Peter is at the heart of the story in the broader narrative but also in the flashbacks to his childhood that are laced throughout the sixteen chapters, with these flashbacks informing how a thirteen year old Peter Quill would go on to become the sarcastic rebel that thrives in his own hype. His rock-star image and energetic persona have been shaped by a tragic past and the life he has lead has been born of necessity rather than desire.

For a character that stands at the forefront of a legion of cosmic adventures, galactic threats and space piracy, Peter is so cleverly grounded and brought to his knees emotionally. The way his walls are brought down genuinely lets players into the mind of a man that uses his helmet as a mask to hide the pain he can never escape. Peter’s relationship with his mother plays out in flashbacks, providing a window into his childhood on the fateful day that set him on his path to become Star Lord. 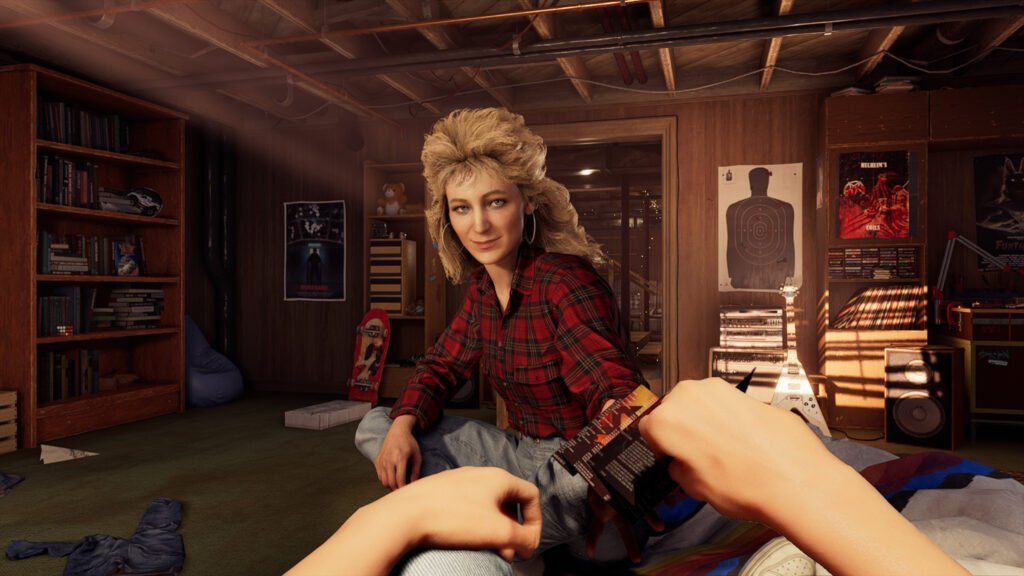 The relationship between the entire team is excellently explored and the story offers up several moments where each individual is given the spotlight, reflecting on their own tormented pasts as well as the situations the Guardians find themselves in during the broader narrative. Despite Star Lord being the only playable character, each Guardian is showcased effectively during combat and the story. For those unfamiliar with the Guardians of the Galaxy, the team is comprised of five misfits that offer varying levels of humour and sarcasm that challenge Star Lord in entertaining fashion start to finish. 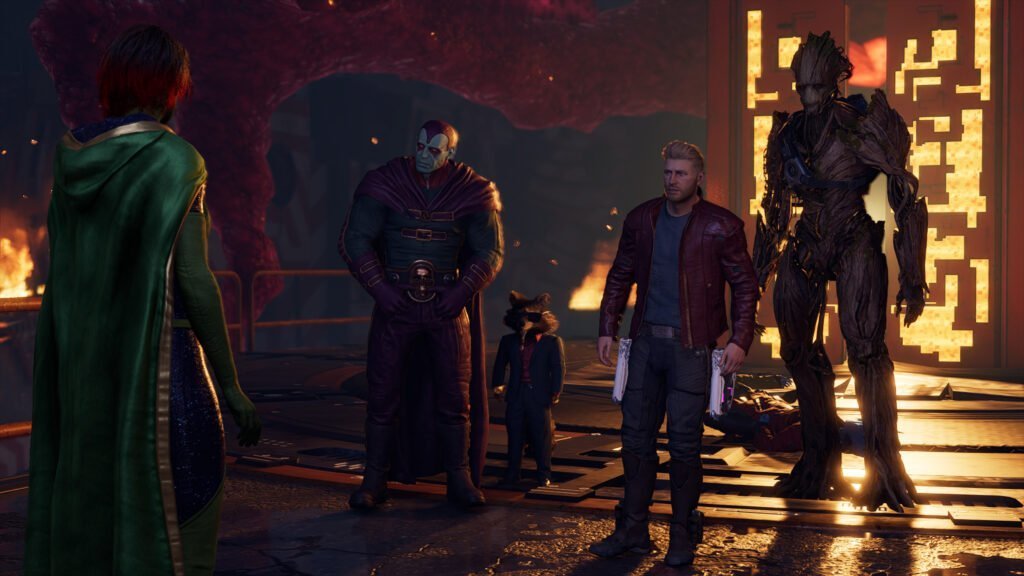 Drax the Destroyer is the muscle of the group, a bulky teal powerhouse covered in red tattoos. His wife and daughter were murdered by the Mad Titan Thanos, sending Drax on a quest for vengeance that ultimately saw him defeat his family’s murderer. Drax possesses super strength and legendary hand to hand combat prowess. 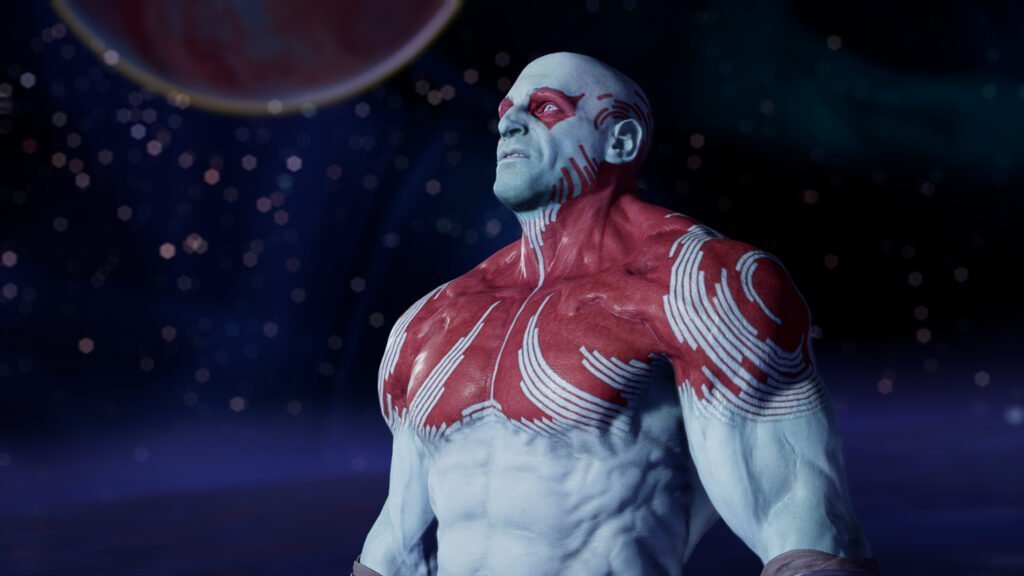 Gamora is the adopted daughter of Thanos, a skilled assassin with impeccable swordsmanship. Her association with Thanos complicates her relationship with Drax, resulting in a lack of trust and a bombardment of jokes and remarks at her expense. 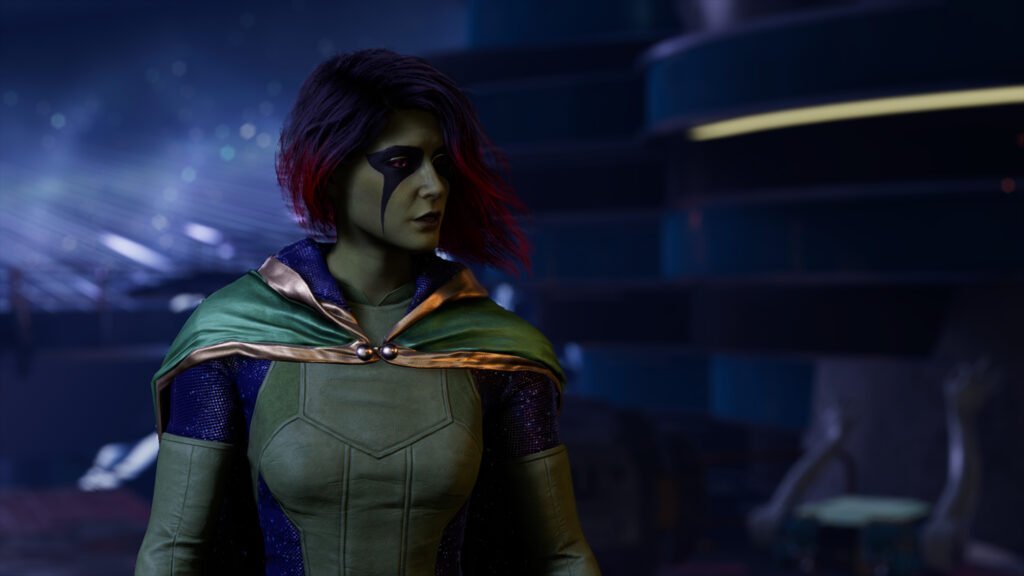 Rocket is, according to him, NOT a raccoon. He is however cybernetically enhanced due to his time in captivity and experimentation. He is a master marksman and regardless of how comfortable his team are with his tinkering and plans, a self proclaimed explosives expert. Rocket is incredibly sarcastic and intelligent, the former attributes frequently disrupting the team and their plans. 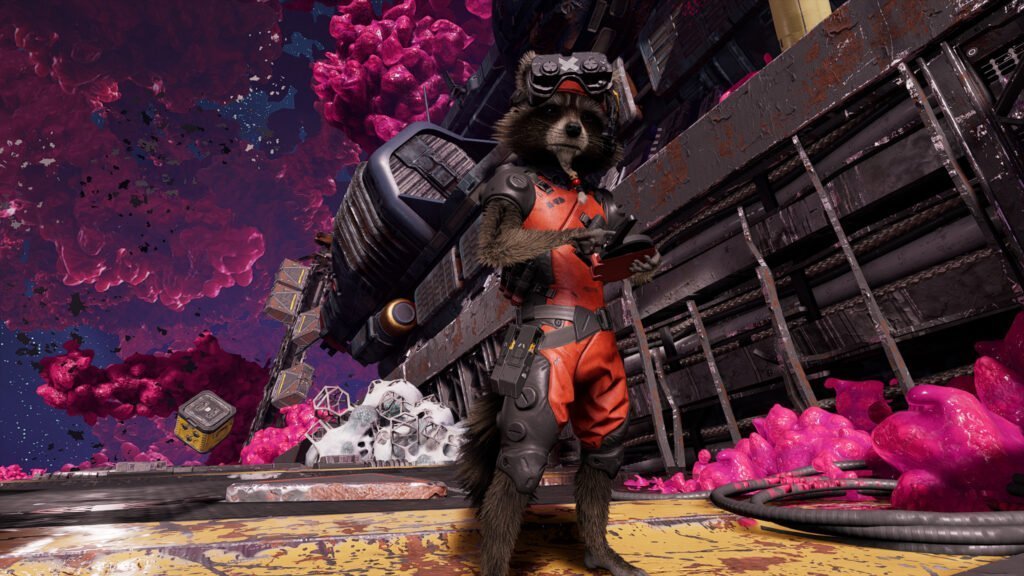 Groot is known as a Flora colossus, the last of his species. His tree-like appearance is accompanied by appropriately flora-based abilities that allow him to extend his limbs, wrap his enemies in vines and manipulate the environment. Groot’s vocabulary is limited to “I am Groot” though the team are able to understand him through special devices. Rocket is extremely protective of Groot and the special bond they share makes them perhaps the closest members of the Guardians. 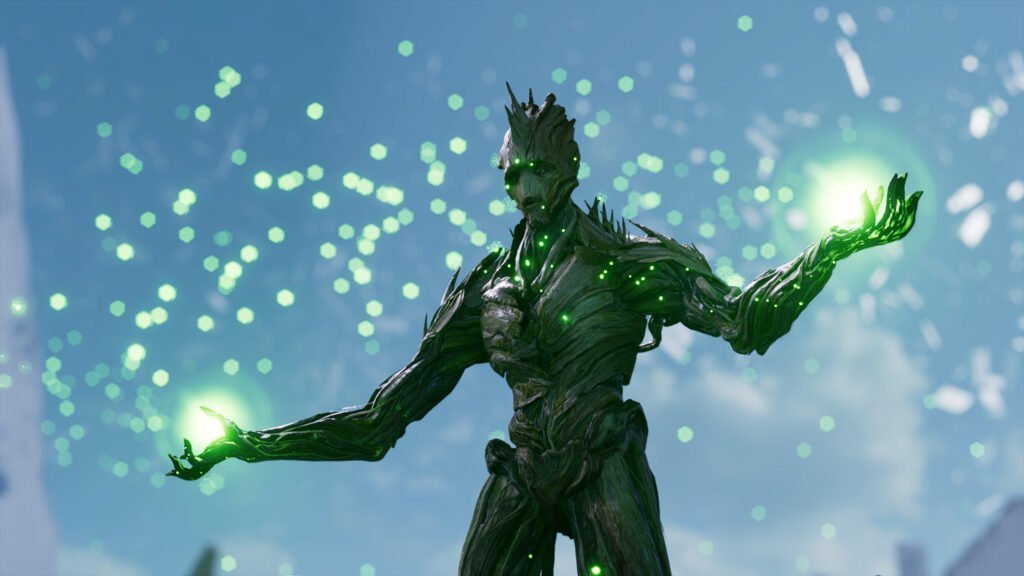 Each of the Guardians are flawed and tormented by their pasts and it’s their collective backgrounds that bring the unlikely band of outlaws together. The team have been together for a long time when the game starts and after the adventure that unfolds they are closer than ever before. The banter between the team is hilarious and persistent throughout the story, exploration and combat. Each Guardian is so well written and their interactions are amusing without wearing thin. 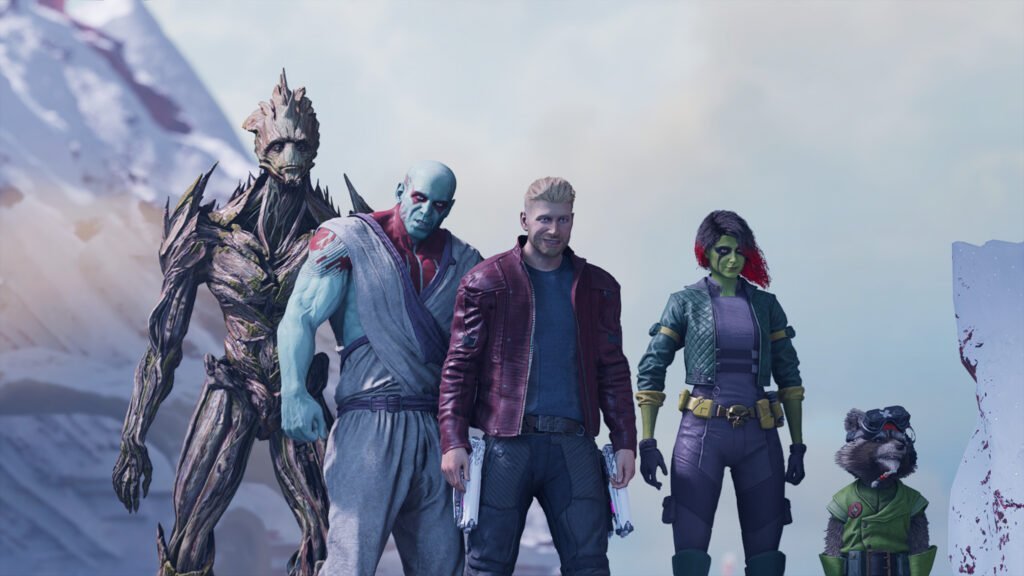 There is only one thing that brings that banter down and that is the ridiculously frequent use of the word ‘flark’, obviously a substitution for a naughtier word beginning with F. It is immensely overused during cutscenes and gameplay to the point of annoyance. It was amusing at first but over the course of 15 hours it would have been used well over a hundred times.

As Star Lord players can jump, slide and platform through the diverse environments across the sixteen chapters. The story is incredibly linear and while this limits exploration to a degree, the environments offer just enough freedom in terms of alternate paths and explorable areas that hide an assortment of collectibles and outfits for the entire team. An impressive amount of outfits can be found for each Guardian, including their appearances from the 2014 film of the same name. 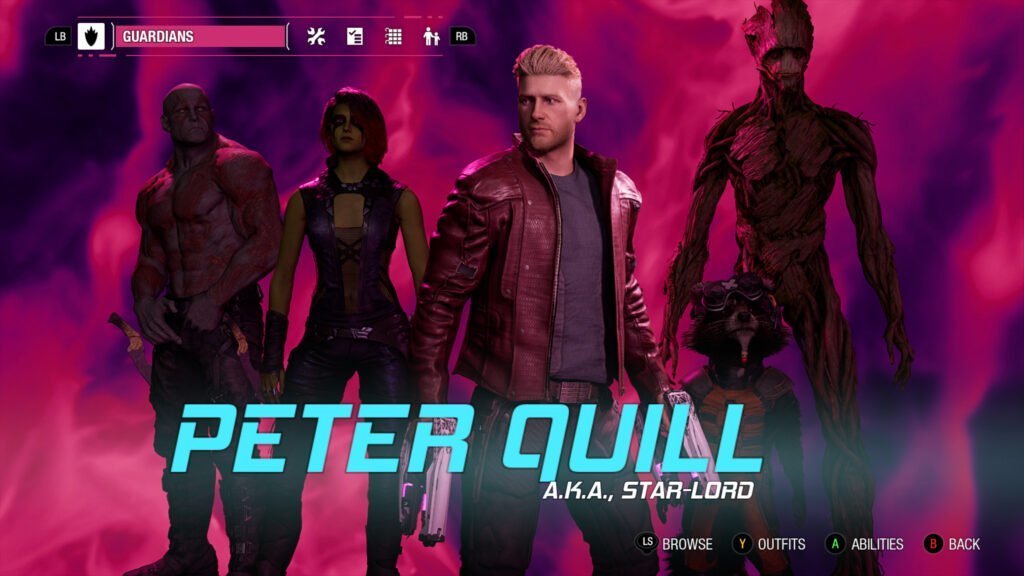 The combat is surprisingly well executed for a single player title and allows the player to not only cause chaos with Star Lords dual pistols, including the four elemental upgrades that come with story progression, each of the four other Guardians have a total of four abilities each that can be unlocked and can be commanded to use with ease on the battlefield. 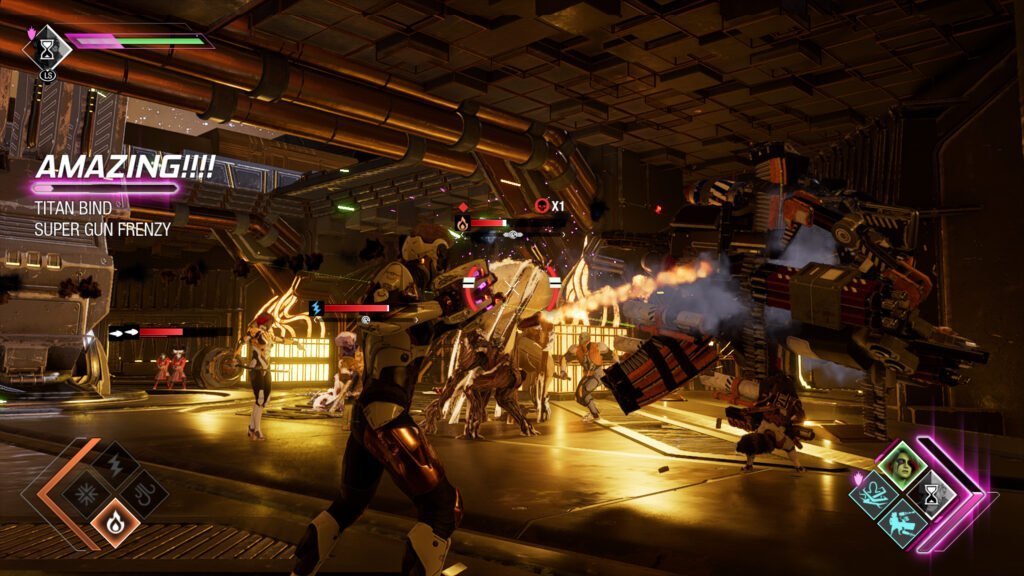 The abilities are all appropriate to their respective skill sets, for example, Rocket can cause mayhem with his rocket launcher, Groot can bind enemies with his vines, Drax can cause wide-spread damage that affects multiple enemies and Gamora can unleash devastating sword combos. Experimenting with all of their abilities is fun and simple to execute, making combat feel more dynamic, engaging and interesting. Each ability requires a brief cool-down before they can be re-used but by balancing the use of each Guardian it is simple to manage.

One of the coolest features of combat is the Huddle Up. Throughout combat a gauge is slowly filled and when it is full, Star Lord can call the team in for a huddle. The Guardians talk to Star Lord and key words appear in the background. Once the Guardians have spoken, the player is able to choose between two dialogue options to motivate his team. Choosing correctly, by making a choice that embraces the key words floating in the background, will buff the entire team while the incorrect choice will fail to rally the team and only Star Lord will be buffed. 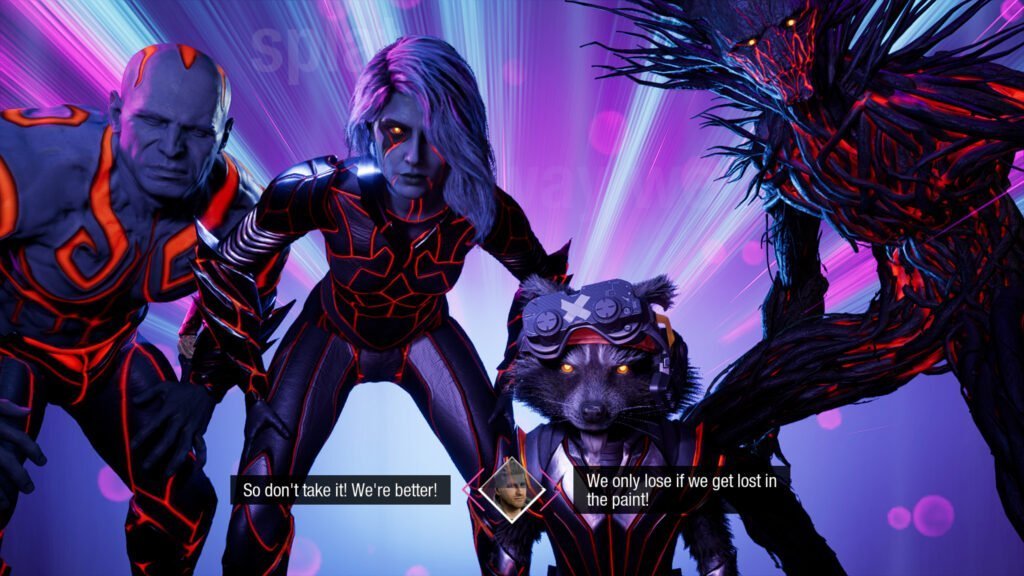 Regardless of success, a random 80’s track from Star Lord’s tape deck will play, turning the battlefield into an energetic war zone with the likes of Billy Idol’s “White Wedding”, Starship’s “We Built This City” or Soft Cell’s “Tainted Love” for example. These hit tracks make combat amusing more often than not though in some of the grander battles, particularly during the wealth of boss encounters, the licenced tracks can make things feel a little less urgent or dire.

Choices are integrated into the dialogue throughout the story that are fun to explore in alternate playthroughs. Some of the choices are inconsequential but others have a more dramatic impact. One of the earliest choices is very entertaining, putting the Guardians to vote on whether to sell Rocket or Groot to get money they need to pay a fine. Hearing each of the team justify their choice is hilarious and putting the verdict in Star Lord’s hands gives the player their earliest choice to change up the mission structure based on their decision.

As Star Lord levels up ability points are unlocked that can be spent on any member of the team, each with three skills overall to unlock and a fourth awarded with story progression. Components can be found in the environment and used at workbenches your upgrade Peter’s jet boots, weapons and shield regeneration for instance. It isn’t the most in-depth upgrade system but it offers enough variety to encourage exploration to upgrade everything. The inclusion of New Game + allows players to start a new game with all of their unlocks intact, making it easier to unlock everything. 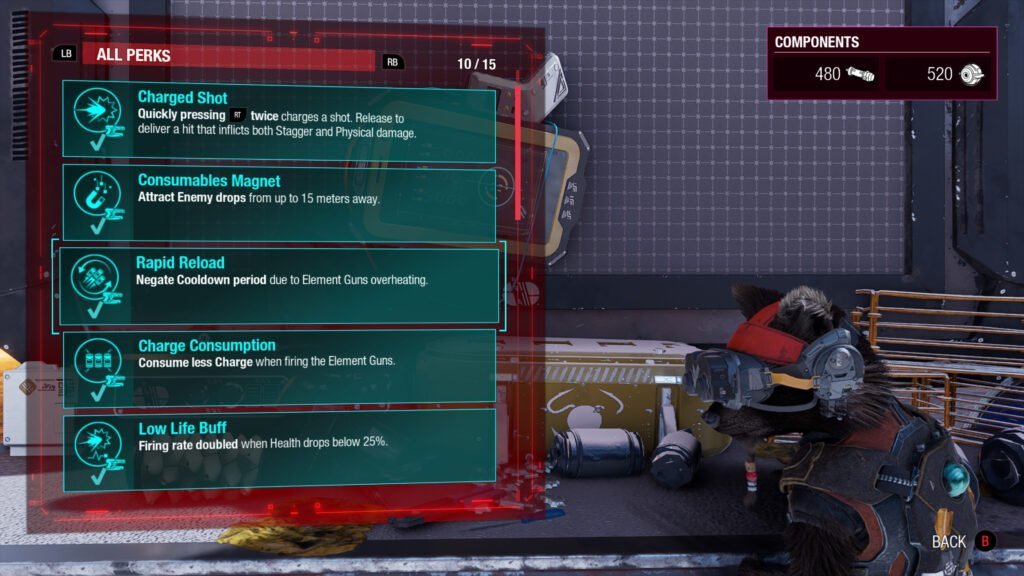 Enemy variety is initially shallow but as the story progresses and the Guardians visit new worlds it opens up impressively, offering up a variety of foes that range from simple, shielded and semi-boss types that have multiple health bars. The boss battles are epic, typically featuring very large enemies that throw an assortment of obstacles at the Guardians to overcome while they slowly chip away at their large health bars. 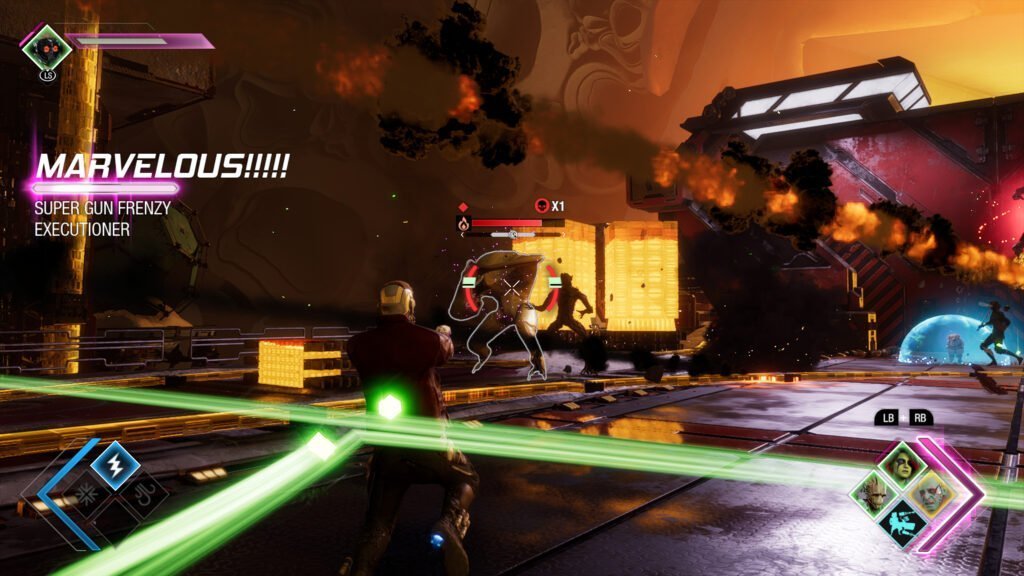 Marvel’s Guardians of the Galaxy is a visual marvel, excelling in character and environmental designs and providing a stunning variety of locations that manage to always feel unique whether the scenes are taking place in interior or exterior settings. The story is incredibly cinematic and the seamless transition between gameplay and cutscenes showcases how beautiful the experience looks at all times. 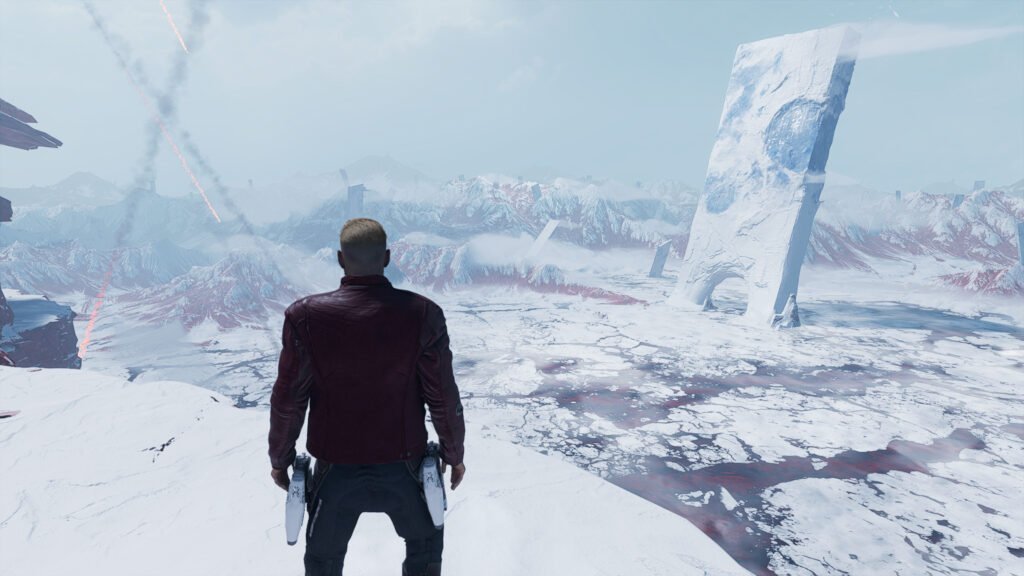 The sound design is epic on so many levels. Weapons sound great, the different enemies each bring their own unique sound to the chaos and the score encompasses a wide range of emotions that allow for shattering dramatic beats, heart warming moments or ominous larger than life situations. Over 25 licenced tracks from the 80’s truly give Guardians of the Galaxy an added layer of humanity and energy. 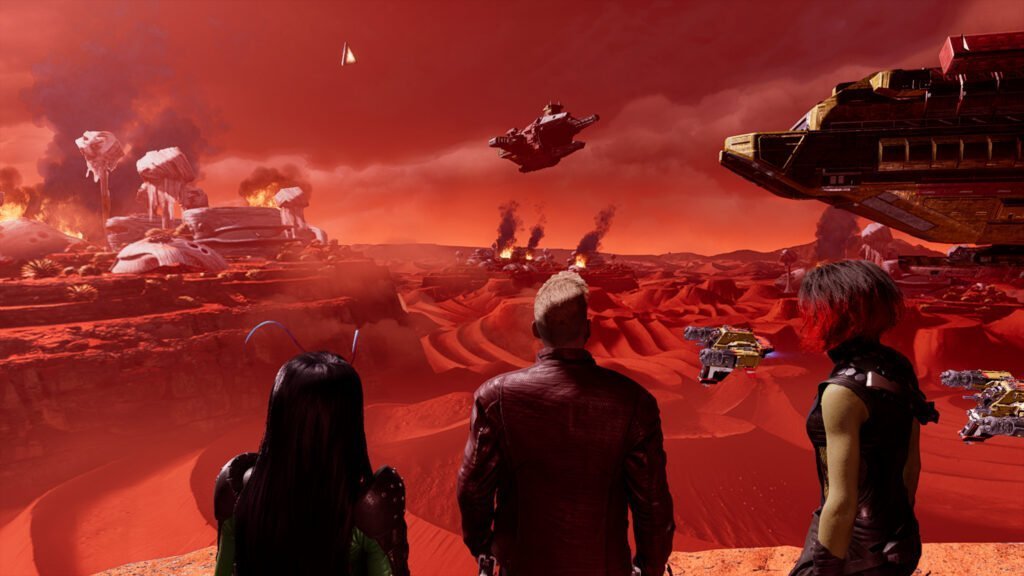 Marvel’s Guardians of the Galaxy is heartwarming, tragic, hilarious and action packed, an experience that truly aims to entertain and engage on every emotional level, succeeding with flying colours. The story unfolds in a manner that is very surprising, constantly stepping up on an emotional level with each passing chapter. With fun team-based gameplay, enjoyable platforming and excellent writing, this adventure is not only essential for Marvel fans but also for players that enjoy great story driven experiences.

My every expectation was exceeded, the humour I expected was dialled up to 11 and the energy from the team and gameplay never ceased to amaze. Marvel’s Guardians of the Galaxy is a cosmic triumph for the band of galactic misfits and showcases the team in their deepest video game experience to date.

– Lack of secondary or optional objectives

– Excessive use of ‘flark’ becomes annoying