Trapped in the horrors of his own writing, author Alan Wake must survive the darkness and save his wife in the psychological thriller that has been a cult classic since its original launch as an Xbox console exclusive in 2010. Alan Wake Remastered is finally here, bringing the epic six episode story and its two special episodes together and for the first time, the experience is also available on PlayStation.

The unique gameplay, thrilling narrative and malevolent Dark Presence have never looked better with the various visual and technical enhancements that have been added. While the experience doesn’t quite reach the presentational standards of current gen titles, after a decade of fans clamoring for more, any Alan Wake is some good Alan Wake.

Alan Wake established a cult status for its incredible writing, unique and engaging gameplay and thrilling cinematic presentation. Its brilliant story is excellently paced and the episodic structure the narrative unfolds within allows each episode to feel like a self-contained story while contributing to a broader, more exciting overall arc that is built masterfully with gripping cliffhangers. Each episode opens with a “previously on Alan Wake” story recap that works great for players that only have time to tackle the movie length episodes one at a time. Players are brought up to speed from the events of the previous episode with information relevant to the next.

The formula just works. Had the game be told in a linear structure without the episodic breaks the suspense wouldn’t quite hit the same. Developer Remedy Entertainment have become synonymous with incredible writing, complex narratives and establishing layers of suspense and atmosphere that are unrivaled amongst their peers. And telling it through the lens of the protagonist author… the writing is masterful. Period. 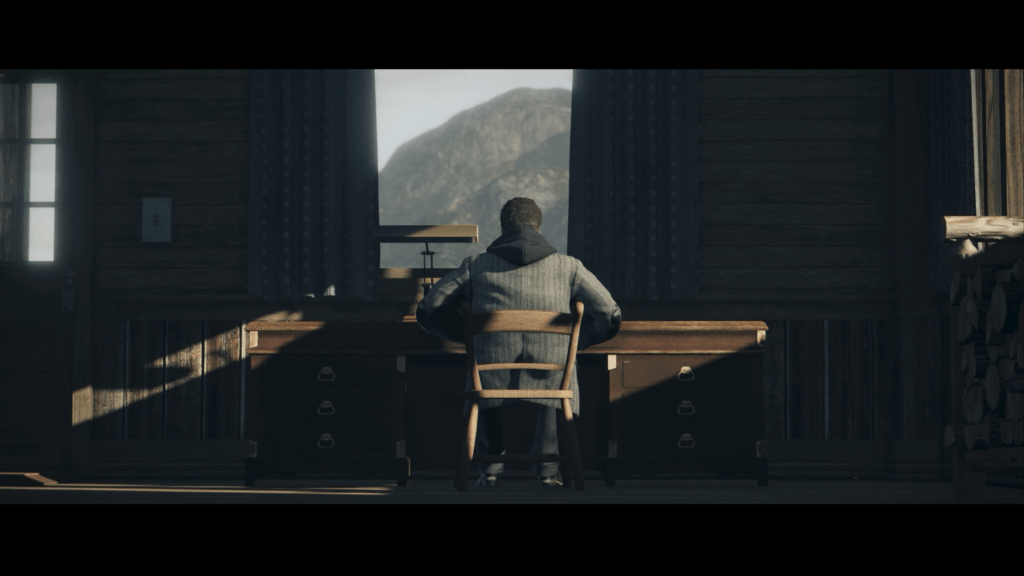 Alan and his wife, Alice, are taking some much needed vacation time away from their big city life. Alan, a best-selling crime fiction author suffering from two years of writer’s block and Alice, professional photographer and designer of her husbands novel covers, retreat to the seemingly sleepy town of Bright Falls, Washington at the advice of Alan’s best friend and agent, Barry Wheeler.  A small cabin on a small island in the middle of Cauldron Lake seems like the perfect getaway from the pressures of the city.

It’s quiet, isolated and quaint but the true nature of their getaway is revealed by Alice as a scheduled visit for Alan to meet with famous psychologist, Dr. Emil Hartman, in an effort to remedy his writer’s block. After seeing the typewriter she has prepared for him, Alan is infuriated and heads outside to clear his head. Immediately following his hasty departure Alice screams from the cabin, leading Alan to rush back only to find her gone and to catch a glimpse of her being dragged under the water by a mysterious force. Diving in after her, Alan blacks out, regaining consciousness a week later after driving his car off the road with no recollection of what happened since the cabin. Pursued by entities manifested from the darkness, which Alan would come to learn was a mysterious force known as the Dark Presence, Alan discovers pages of a manuscript that foretell the events he would go on to experience. This manuscript was written by Alan himself, for a story called ‘Departure’ that he doesn’t remember writing. With the realisation that he has written himself into a horrific and thrilling tale full of twists and turns, not unlike his previous works or that of a source of his inspiration, Stephen King.

Every horror, every obstacle, every life or death situation that Alan finds himself in is the result of his own writing, his own wild and dark imagination. Imbued with a sense of hope that the ending he doesn’t remember writing is one that reunites him with Alice motivates him to continue despite the manipulation of his own words by the Dark Presence and the powers seemingly tied to the history of Bright Falls, Alan discovers this isn’t the first time the writings of an author have become a twisted version of reality. He isn’t the first author to become trapped by the Dark Presence but he will be the first to escape its clutches if he succeeds, a task that seems possible only with the help of the other writer, a metaphorical AND physical beacon of light guiding him on the path he has laid out for himself. Thomas Zane is that beacon and together, they must confront the Dark Presence, defeat it if they can and escape the horror story that Alan has written himself into the darkest corners of. 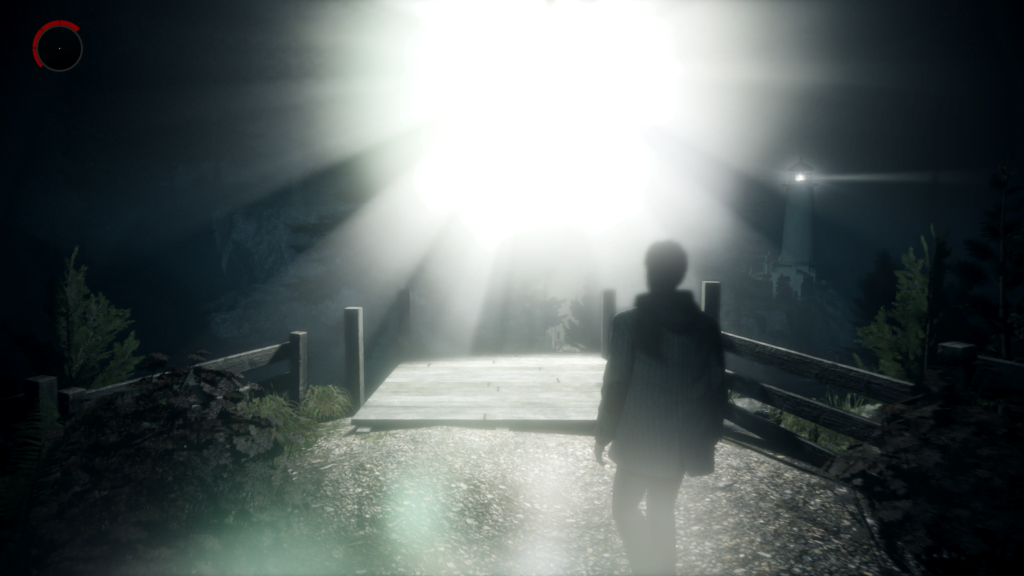 Alan Wake Remastered is the definition of a remaster. The story remains unchanged, the gameplay remains as it was in 2010 and unfortunately, the minor issues that haunted the original are back. The enhanced visuals significantly improve the experience and are more than enough to overcome the minor inconveniences such as Alan’s extremely limited stamina that slows him from a sprint in mere seconds, stiff character animations, clunky platforming sections and the shared dodge/sprint button. These flaws are as prevalent as they were a decade ago but when compared against every element that Alan Wake gets right from the writing, atmosphere, score and unique gameplay, they equate to a sentence in a chapter full of page-turning moments that flow one after the other. 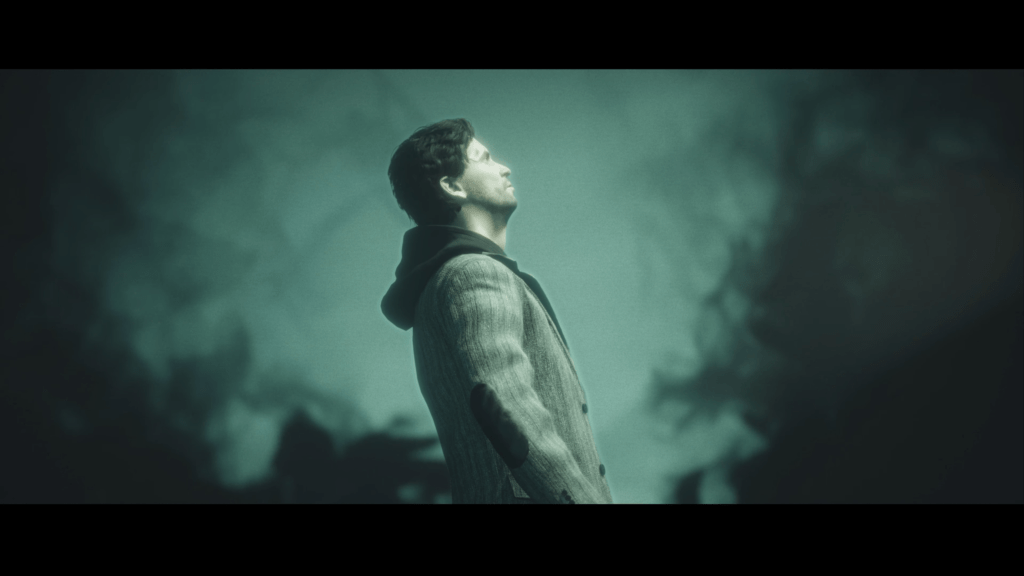 The gameplay is incredibly simplistic thought its unique formula in regards to the combat is excitingly different. Equipped with a flashlight, guns, flares and flashbang grenades, Alan can only overcome the horrors of his self-inflicted nightmare by shining light on its darkness, exposing the entities and leaving them vulnerable to gunfire. Every enemy has an aura, a shield of darkness that protects them from damage from Alan’s arsenal of guns, a shield that can only be penetrated by light.

Alan’s flashlight can be aimed at the enemies until they are vulnerable, with the strength of light based on the player’s pressure on the left trigger. The flashlight uses battery power and needs its batteries replaced but luckily, there is never a shortage of battery packs to find throughout the entire game. The battery also slowly regenerates when not in use. Aside from the flashlight, enemy shields can also be depleted by using flares, the flare gun, flashbang grenades or spotlights. When enemies are no longer protected by the darkness they can be shot and killed, with some enemy variants taking more shots than others, dependent on their size and the difficulty the game is being played on.

Alan can dodge out of the way of enemy attacks and can attempt to outrun enemies but the poor stamina system requires players to face the horrors of the night in most cases. When Alan takes damage, there are no health packs or first aid items to replenish it. Fittingly, Alan is only safe in the light and in illuminated areas called Safe Havens, enemies nearby will despawn and Alan’s health will replenish. 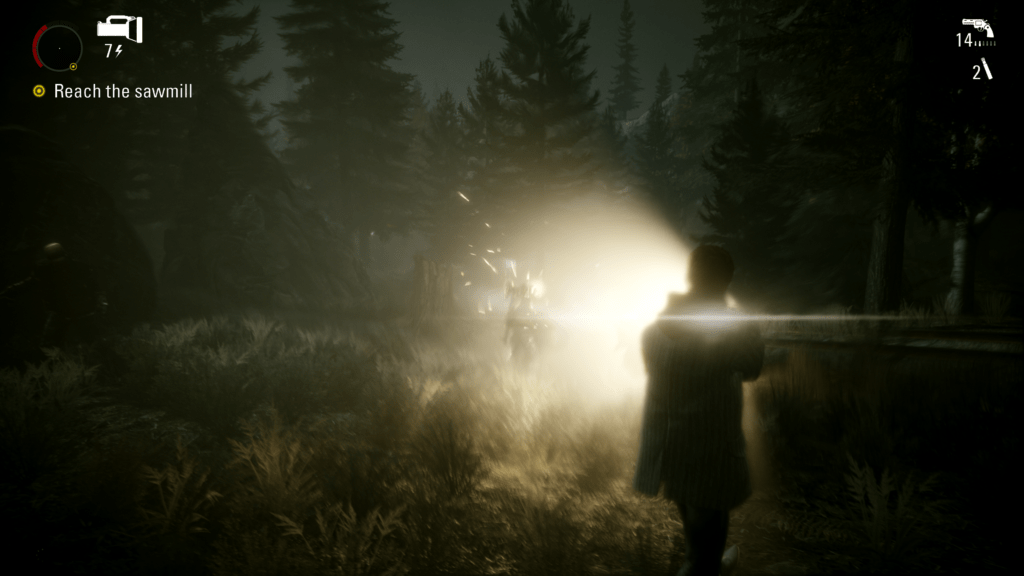 Aside from the simplistic combat system, Alan can interact with switches and generators, drive cars in certain sections, climb short ledges and jump. Understanding the strengths of Alan’s arsenal of light-summoning weapons, for lack of a better term, are key to using his limited inventory efficiently and buying time to perform some of these actions without fear of interruption from the unrelenting Dark Presence. As flares last around ten seconds before fizzing out, this precious window of safety can be used to activate generators, wait for electronic doors or gates to open or for weapon reloading ahead of the next descent into the darkness. 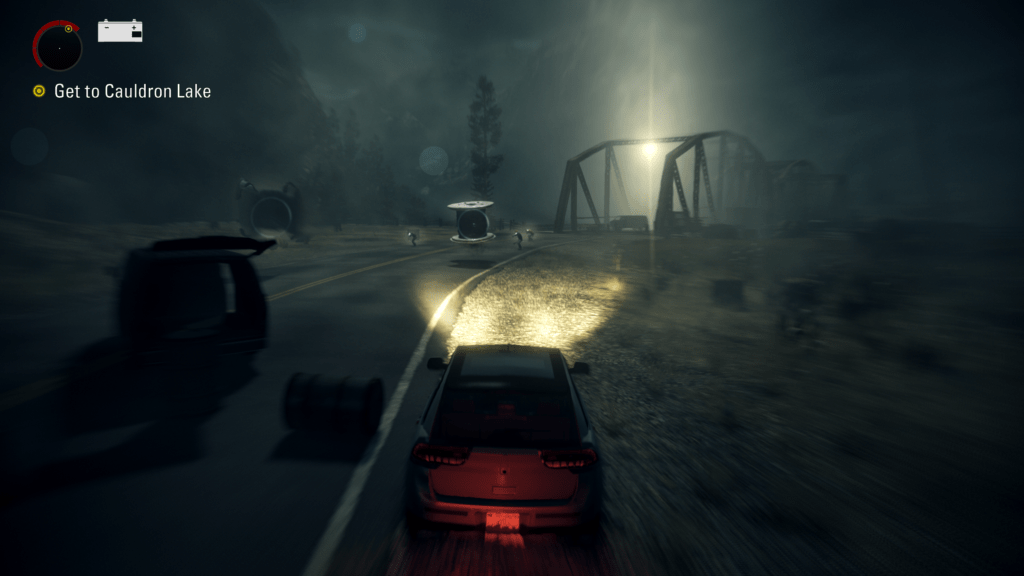 Littered throughout the nightmarish plane are various types of collectibles for completionists to pursue. Coffee Thermoses and signs comprise the least exciting of the list but the radio shows that can be found and listened to and the TV sets that can be switched on and watched offer compelling context and additional backstory that are worth seeking out and sitting through. Hidden chests that can be found by following yellow markings that are only revealed by Alan’s light offer valuable resources such as flares, flare guns and ammo that are worth taking a detour for if a glimpse of yellow paint is stumbled across.

Easily the most interesting collectible though provides incredible insight into the story and upcoming sequences in the form of the manuscript pages. While some of them appear as unmissable, story-related interactions, there are 106 in total that enhance the story immensely. Many of them wonderfully describe scenes the player will soon find themselves in the middles of and if they have been paying attention and reading these, they may be able to enter some encounters prepared and aware for specific enemies to approach from specific places. 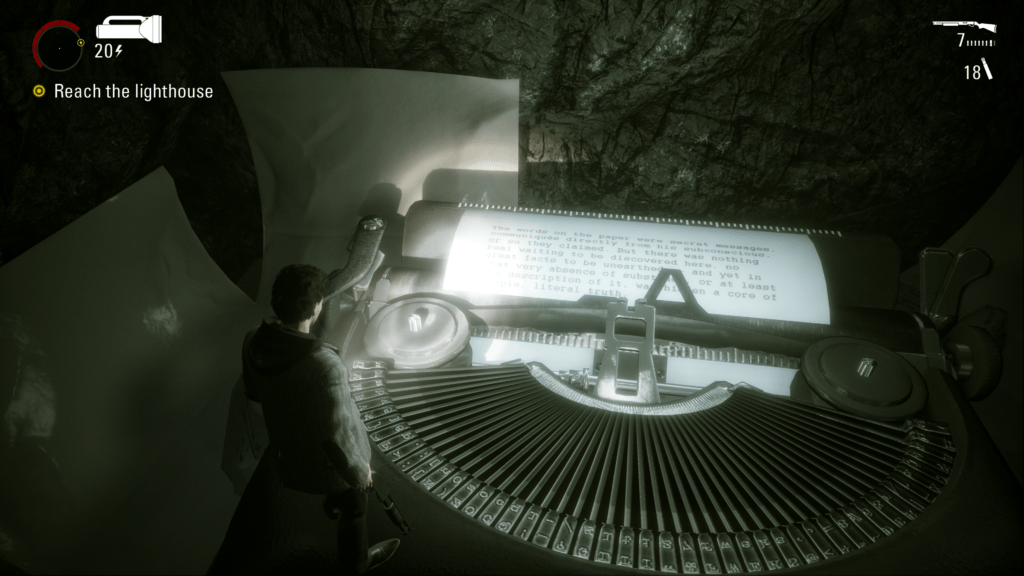 Constant narration from Wake throughout the entire game is welcome, with each piece of dialogue feeling meaningful, interesting and insightful. Brought to life by the incredible performance of Matthew Porretta, Alan feels alive, deeply developed and believable. Accompanied by an atmospheric score, thrilling audio cues and fun sounds that accompany the beginning and end of Dark Presence encounters give the entire sound design focus and an excitement that never waivers.

Visually, Alan Wake Remastered is an obvious step-up from the 2010 original though it still looks a little dated. The improvements are undeniably better, that is not in question, there is just an overall look that says the game is over a decade old at heart. Alan himself and the environment are wonderfully revitalised however and though the assets and characters that populate the remainder of the world aren’t as re-inspired, this remaster looks amazing where it counts. 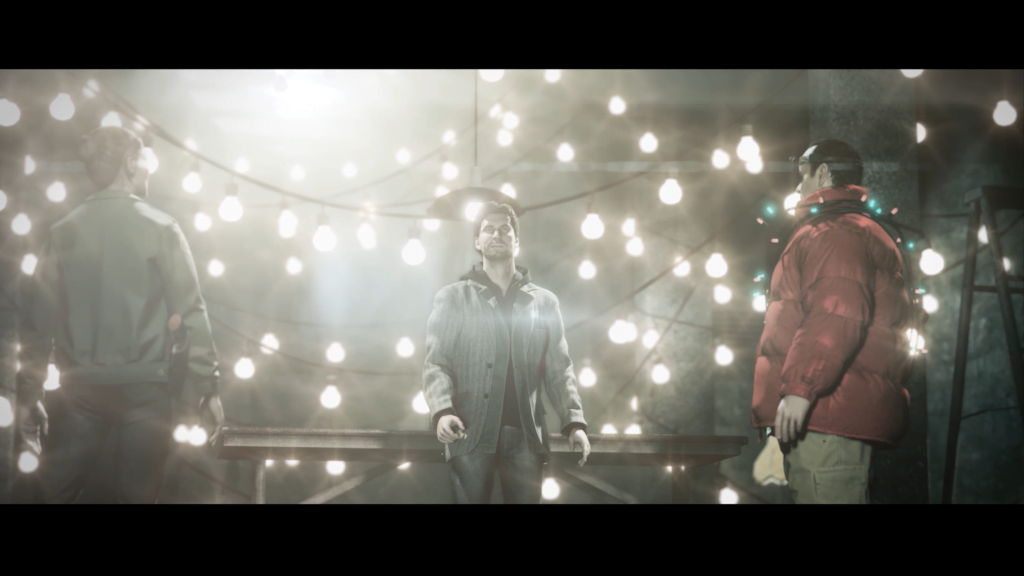 The pair of special episodes that originally launched as DLC are both included, adding an extra 3 or so hours of content that expands upon the main game’s ending, introduces fun new gameplay mechanics and raises questions about the future of Alan Wake on a character level and a franchise as a whole. Players that have experienced Remedy Entertainment’s Control, that originally launched in 2019 and its second expansion ‘AWE‘, which starred Alan Wake and introduced him to the world of Control and what is now known as the Remedy Connected Universe, may be witnessing Alan’s origins for the first time and that additional insight certainly enhances the impact here.

Alan Wake Remastered is the hard back edition to the original. Neater presentation, a reinvigorated interest and opportunity for a new audience while serving as a tasty addition to the collection of existing fans that have been clamoring for more of the troubled writer for over a decade. Much like a novel, Alan Wake in any capacity is like a book you just can’t put down.

+ Welcome visual and technical improvements over the original

+ Inclusion of both DLC episodes

– Still shows the signs of being over 10 years old 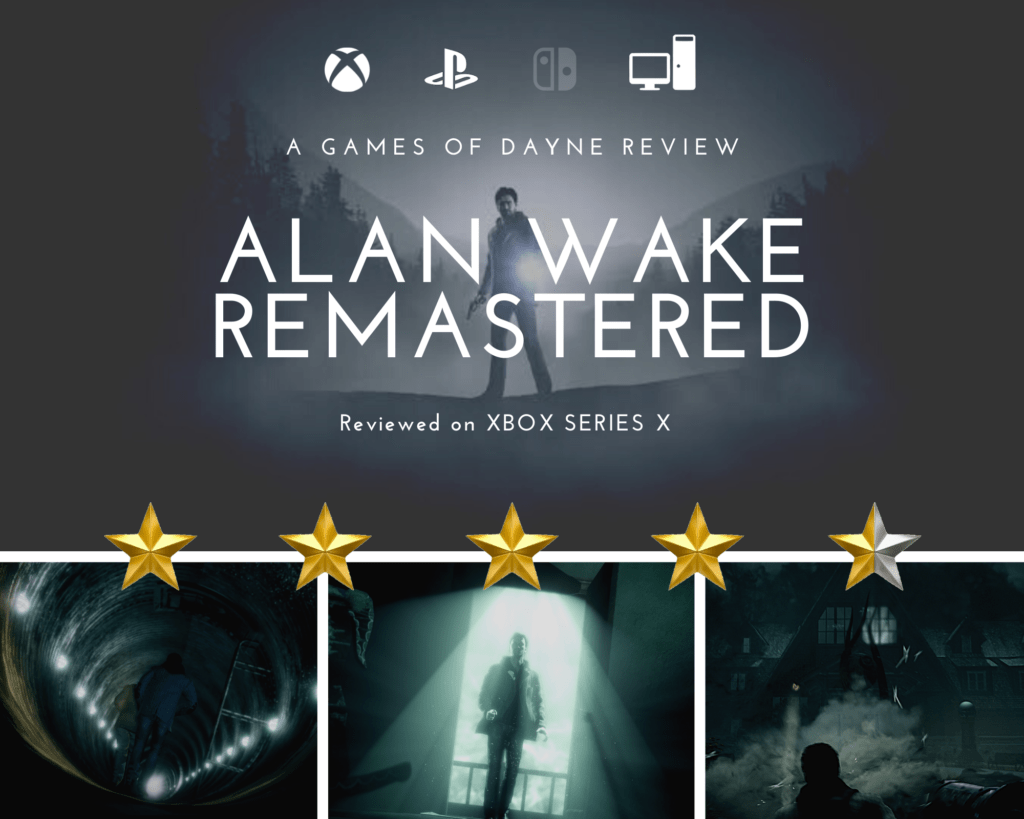