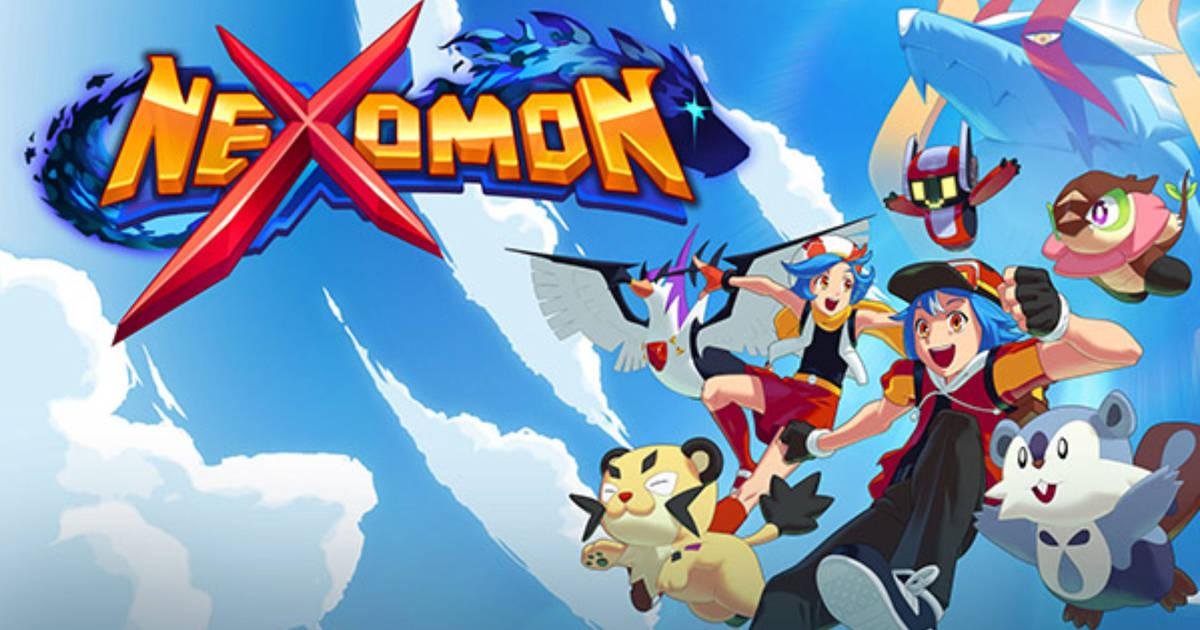 Nexomon has the incredibly difficult challenge of escaping the shadow of the gigantic franchise it emulates. As a monster taming adventure that borrows heavily from the Pokémon franchise in terms of gameplay elements, premise, and art design, Nexomon manages to part the darkness of that shadow, stepping forward with a beaming light of something that truly sets it apart from its inspiration. Story.

While at its core the concept of capturing a crazy number of cool monsters, training them, and battling them against others is familiar, Nexomon puts its own spin on these to try and make it feel different but it’s what it does with the story and its characters that truly make the experience memorable and stronger than its Poké-counterpart. Full of heart, charm, and humour, Nexomon is an absolute joy and feels less like an imitation, and more like a genuine alternative that in many ways is superior.

Despite being a port of a 2017 mobile title, Nexomon is the first title in the series but the second to make its way to consoles. Nexomon: Extinction (Review HERE) launched last year and is a sequel to the mobile game, therefore this iteration on console is a prequel to that. As such, Extinction has a few gameplay mechanics and features that are absent in Nexomon but that does not detract from the general joy of this experience. 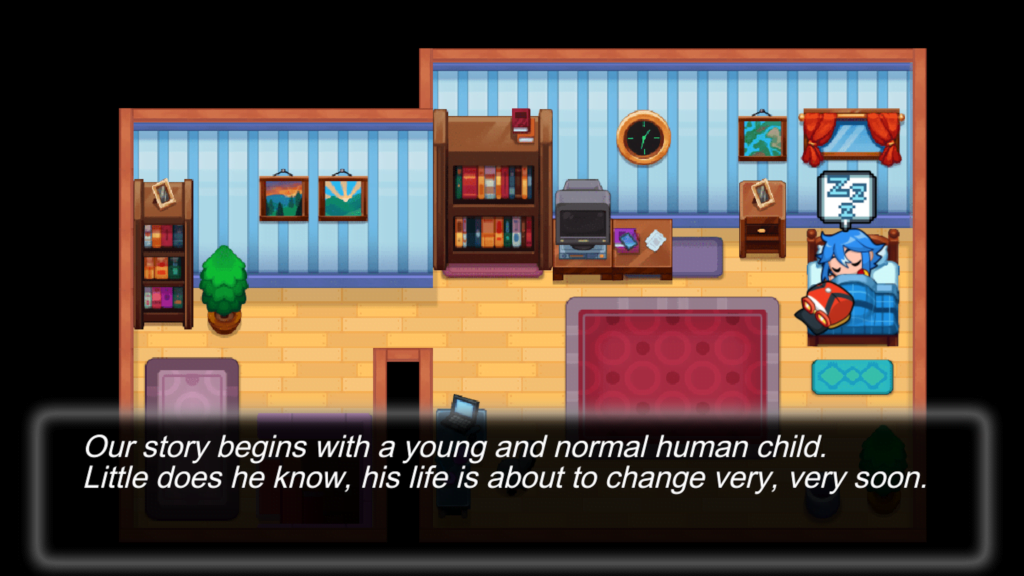 Nexomon tells the story of an unnamed, blue-haired protagonist that embarks on a mission to stop the Nexolord, a malevolent tyrant hell-bent on resurrecting Omnicron and his children, powerful Nexomon that almost brought mankind too its knees millennia ago. With its premise rooted in a sense of destiny and a scope that puts the weight of the world on the shoulders of a child, the story of Nexomon unravels in ways that offer suspense, twists and moments of genuine shock that captures its players in a way that Pokémon hasn’t yet managed to do.

The story has a purpose, its characters all have vital roles to play, and nobody is present for the sake of it. Injecting the narrative with such grandeur, scope, and destiny allows the stakes to feel as though they matter. By the time the story reaches its end, the conclusion feels satisfying and warrants a moment of reflection to digest how cleverly it unfolded. 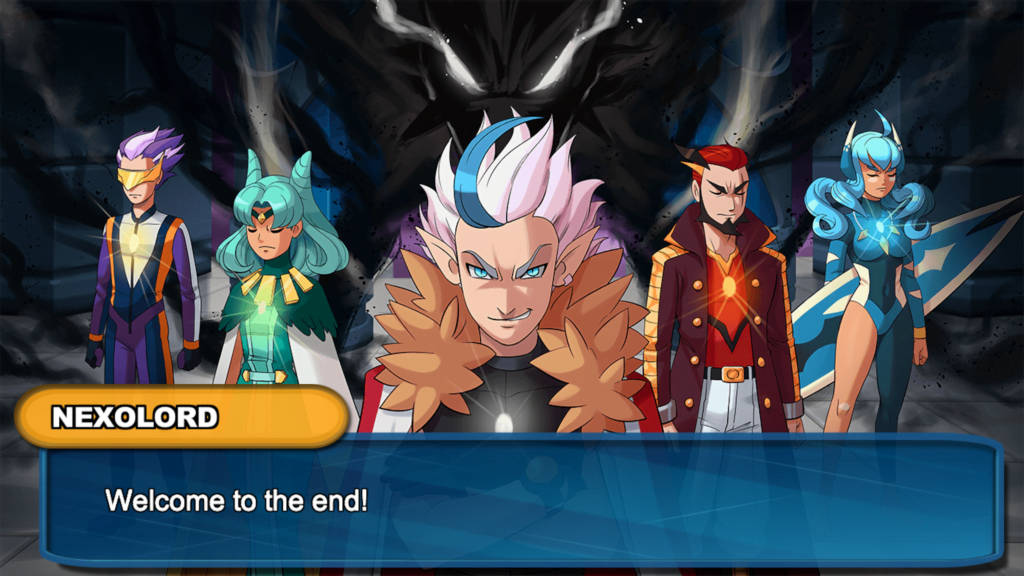 The game opens with a cinematic depicting the epic battle between a brave group of people who brought the fight to, and defeated, Omnicron and his children. Until now, there has been peace. Humans and Nexomon have grown in harmony and have enjoyed a time of prosperity that once seemed unachievable. In the present day, the player is instantly thrust into an evil plot that seeks to end these peaceful times and is presented with 7 Nexomon to choose from as their partner. 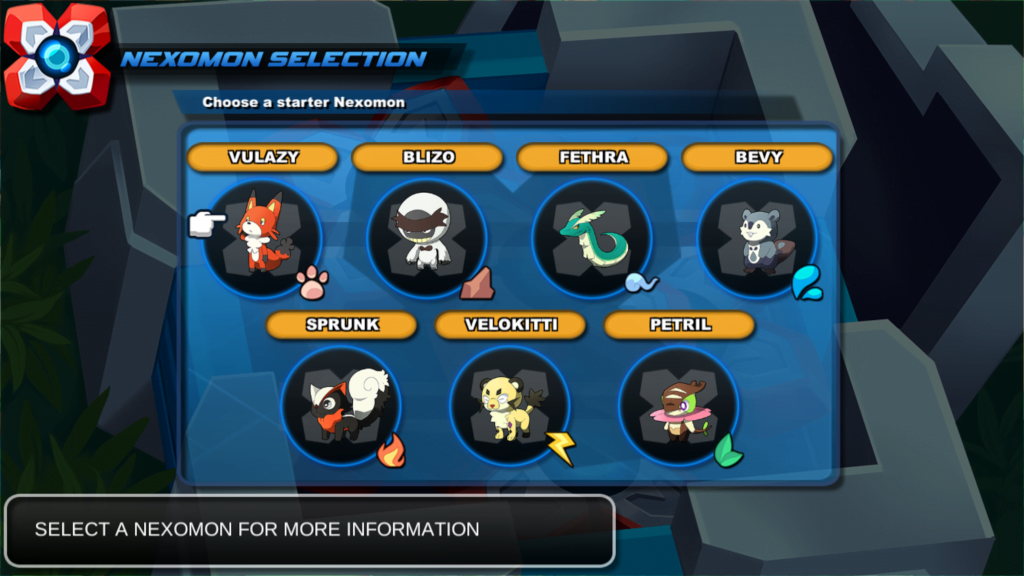 Every Nexomon has an elemental type which has its own strengths and weaknesses against others. For example, water is very effective against fire while the electric type is not very effective against the ground type. Understanding the elements is the key to victory and by compiling a team full of various elemental types is essential to overcome the variety present in the opponents. 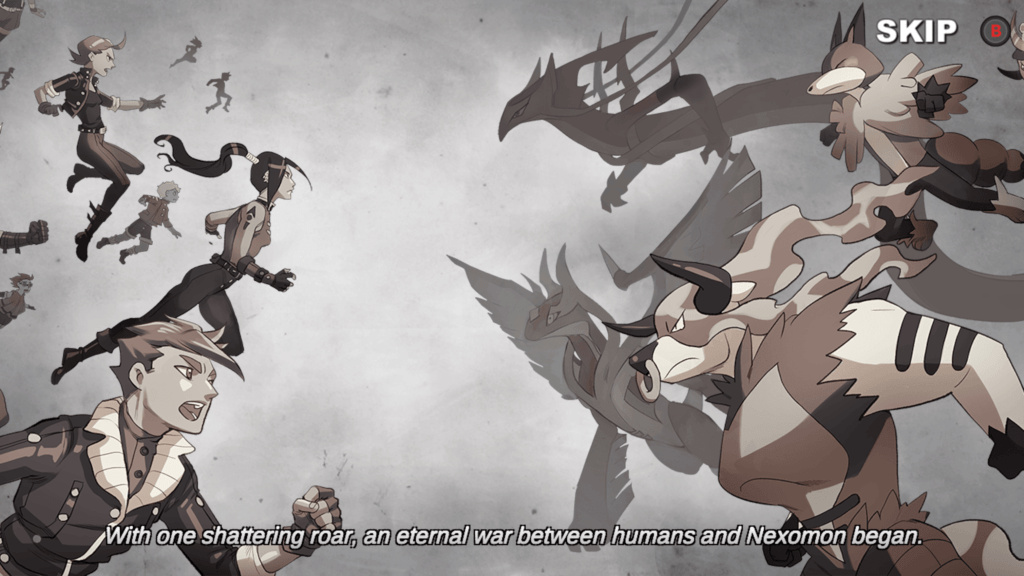 The protagonist feels important, despite never uttering a single word. How characters react to and converse with them establishes their role and strength, reinforcing that the battle against the Nexolord, Omnicron, and all their faithful minions can’t be stopped by a lesser Tamer. A Tamer is someone who captures Nexomon with Nexotraps and raises and trains them. These Tamers are scattered throughout the world to be battled, proving who is the better Tamer and whose team is the strongest. Yes, it sounds familiar to those who have grown up with Pokémon and for the most part, Nexomon plays like that catalogue of titles too. 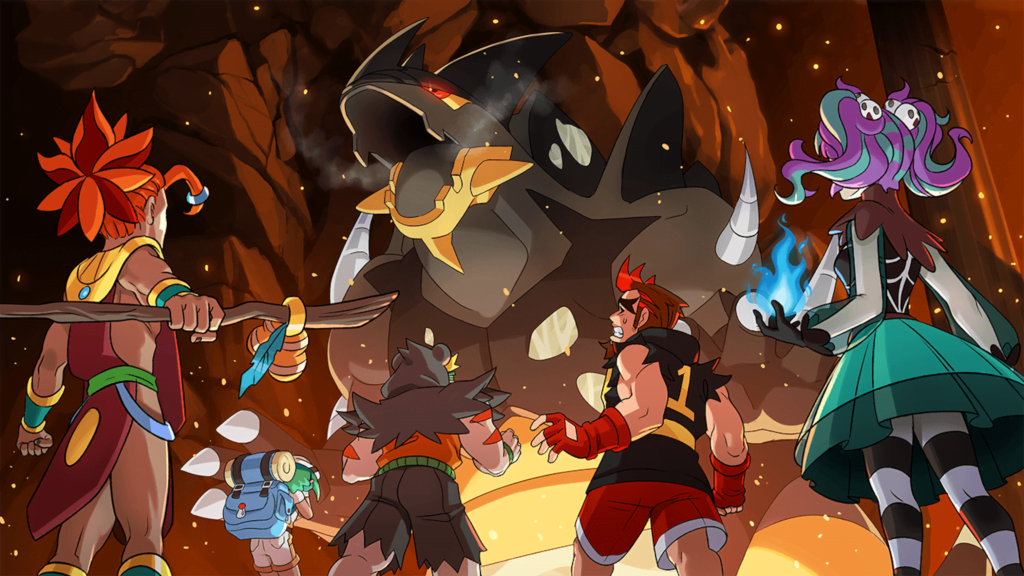 Battling Nexomon against each other is simple. Each Nexomon has a health bar and when it is depleted, the Nexomon is defeated, and another will be sent in its place until one Tamer has had their entire team defeated. A maximum of six Nexomon comprise the player’s team and enemy Tamers will have anywhere from one to six, rarely will an opponent have a full team.

Every Nexomon has four skills. These skills are comprised of offensive and defensive abilities, all of which consume stamina. Each Nexomon has a stamina bar, and the player must be mindful when planning their moves so as to not find themselves defenceless. If a Nexomon does not have enough stamina to perform a skill, they will rest for a turn to replenish some, leaving them open to attack from the enemy Nexomon. Stamina and health can be restored by using items that can be found in world or bought from stores. 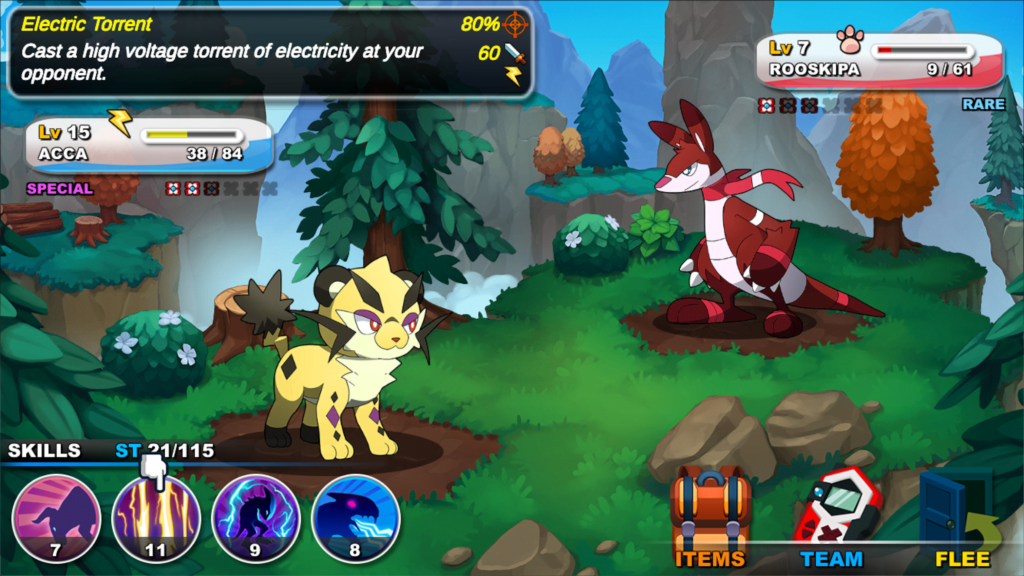 Moving patches in the environment indicate that a Nexomon is in there, ready to be battled or tamed. Weakening the Nexomon by using light attacks, combined with status effects such as paralysis, burning or sleeping, will leave them weak enough to be captured using a Nexotrap. Sometimes the Nexomon will break free, and the player can either attempt to weaken them further or continue throwing Nexotraps.

If the Nexomon is caught, it can either be added to the players team or sent to a storage box that can be accessed in the Healing Centre present in every town. The rarity of every Nexomon is displayed during the encounter under their character bar, indicating whether it’s common or mega rare for instance, possibly influencing the player’s decision to either defeat them for experience, or attempt to catch them without running the risk of struggling to find them again.

Success rates of catching Nexomon seems pretty low, even when they only have a sliver of health remaining or are under the effects of status ailments, they tend to break free with an alarming rate. Golden Nexotraps can be found that guarantee capture but these are certainly best reserved for the Legendary Nexomon in the endgame. 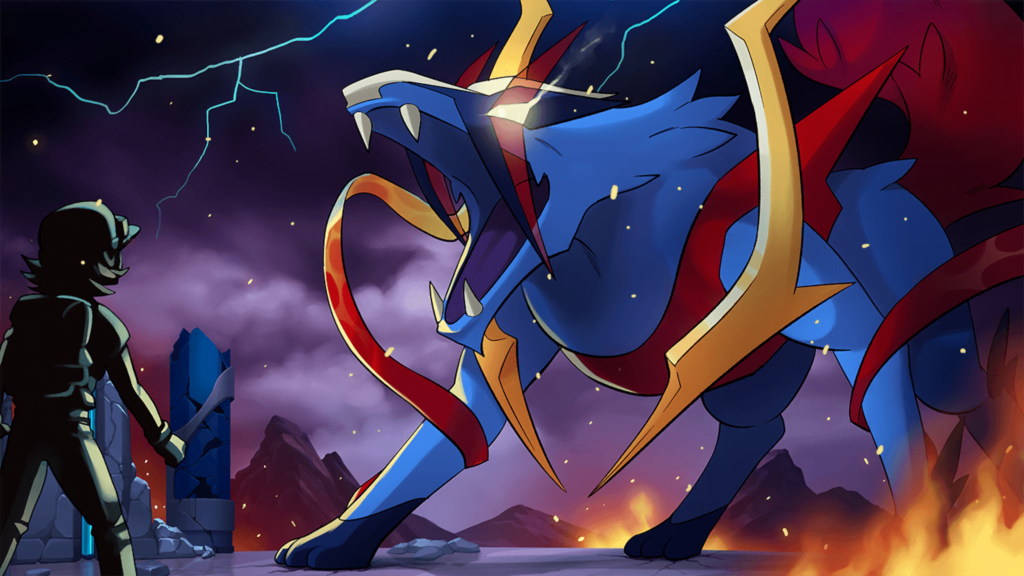 With every battle, Nexomon gain experience. This experience contributes to a levelling system, and when Nexomon reach certain levels, which differs between all Nexomon, they will learn new skills or evolve into new forms. Yes, this formula is still sounding familiar but there are also parts of it unique to Nexomon.

When new skills are learned, existing ones aren’t overwritten. Instead, players able to freely equip any of the skills they have unlocked outside of battle. This freedom allows players to customise their Nexomon, experiment with different skills and their respective element types without forcing the player into a decision that can’t be undone later. The world is full of quirky characters to interact with and joyfully, many of them offer humorous or sarcastic quips that make these interactions entertaining. As well as characters to speak to, there are Tamers to battle, items to find and, of course, Nexomon to catch across the nine diverse regions, each offering specific types of Nexomon and typically some favouritism of certain types by the local Tamers.

Travelling between the regions is initially on-foot, though once a certain part of the story is reached, the player can fast travel between certain locations by interacting with warp totems.

One of the most enjoyable aspects of Nexomon is the humour. Whether it’s the characters that accompany the hero, random NPCs or even the villainous characters, sarcasm and wit come across more often than many would expect. It keeps things light amidst the heavy themes of global conquest and offers a playfulness to the interactions that make them worth initiating. Nexomon is very self-aware, on many occasions referencing that the experience is a video game in ways that always managed to make me laugh. 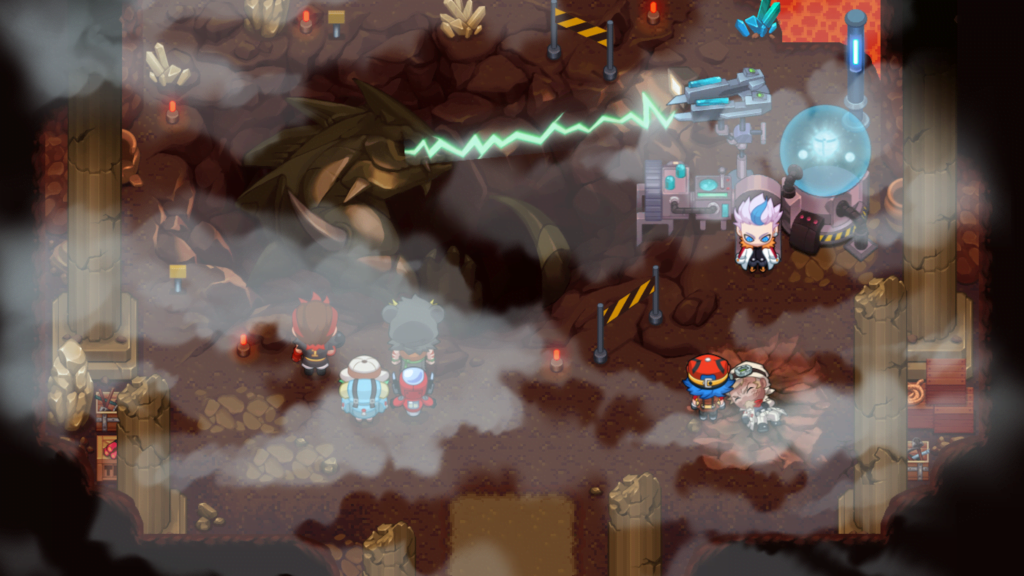 The art design in Nexomon is vibrant, playful, and striking, yet simple and familiar. Comparisons will always be drawn to Pokémon, whether it’s the character models, Nexomon designs or general presentation of the environment. Despite arriving over two decades after the famous franchise that paved the way for Nexomon, this experience looks, sounds, and feels like a faithful homage that has cherry picked some of the best elements and incorporated them into a game that works in 2021.

An energetic score and cheerful sound effects are well implemented, and in some cases, the absence of music altogether allows for some of the bigger dialogue and story moments to have more impact. 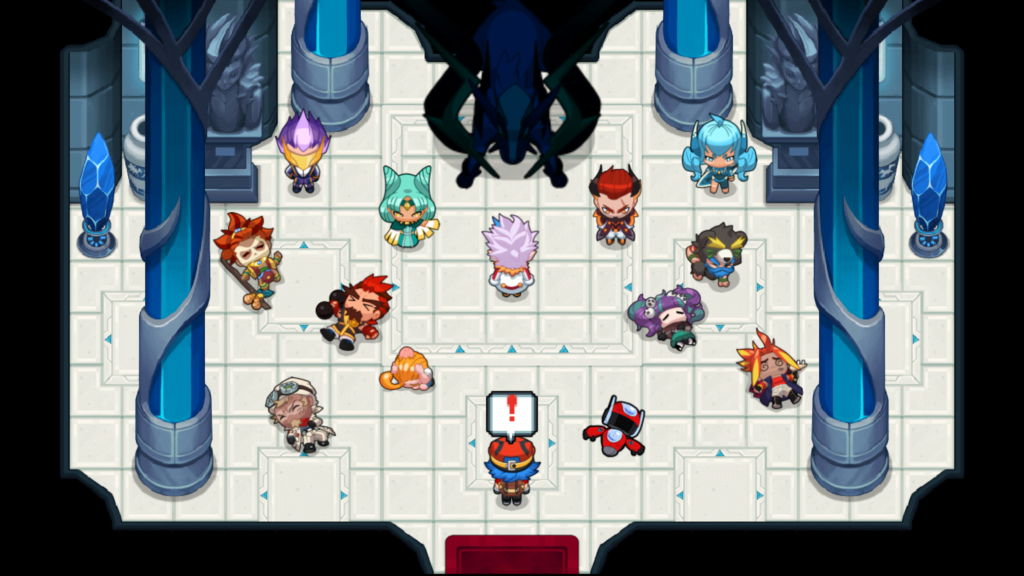 Nexomon is an excellent addition to the genre and one that succeeds in many ways of standing apart from the iconic franchise that established the genre in the first place. With a fun variety of Nexomon to find, battle, tame and train, there is no shortage of replayability. By packing in a story that is full of heart, depth, and charm, Nexomon is a refreshing alternative to Pokémon that its fans or new players will be able to enjoy and appreciate.

+ Clever writing and use of humour

– Tamers are surprisingly few and far between, not many overall 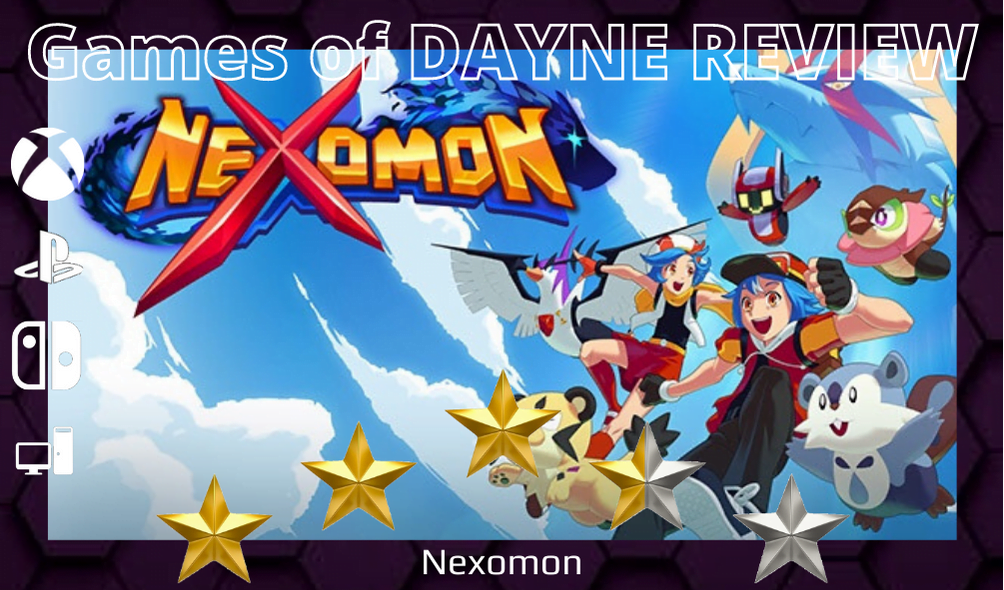