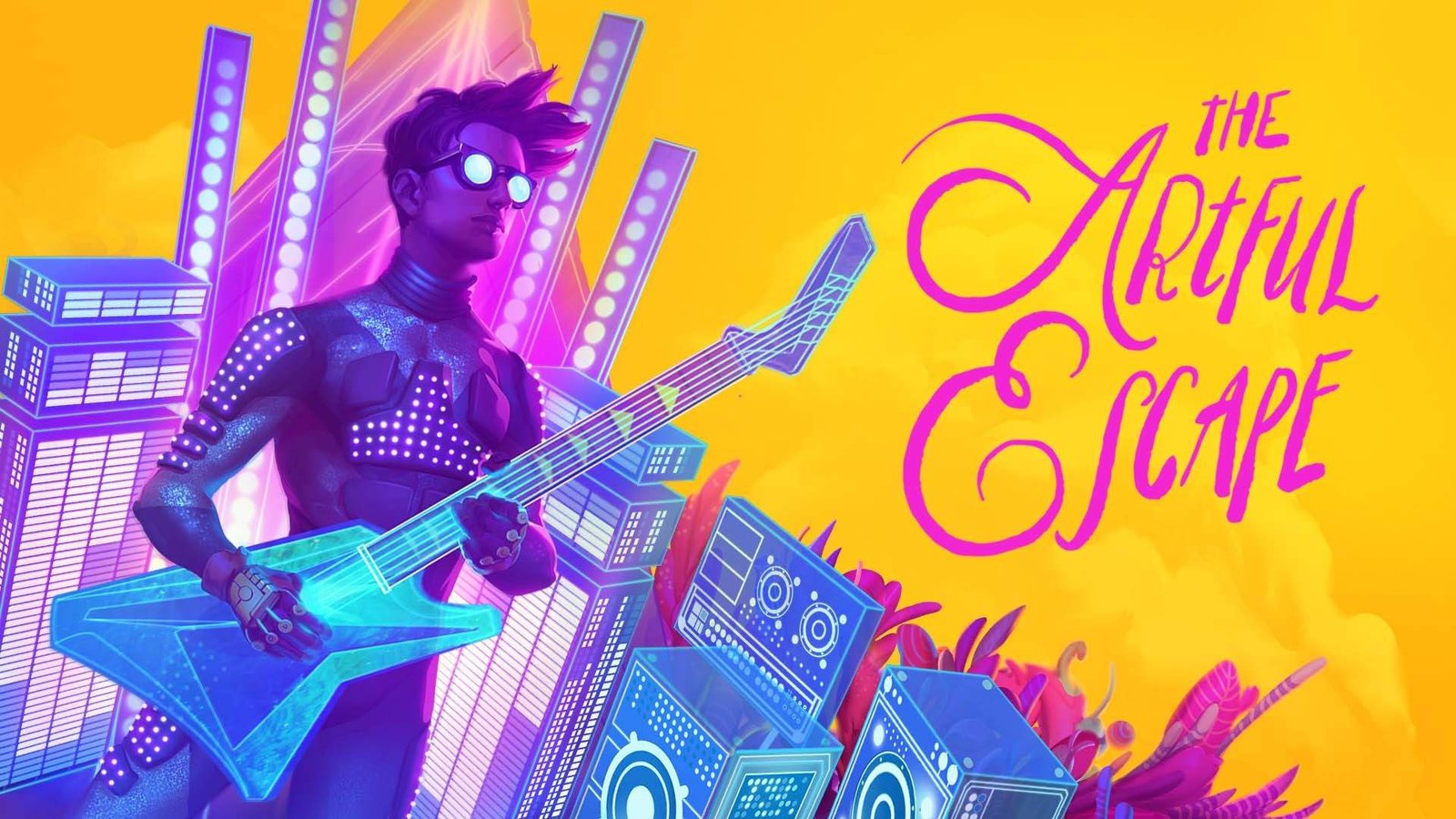 The Artful Escape lives up to the definition of artistic on every level. Francis Vendetti is the teenage nephew of a folk icon and on the eve of his debut performance, embarks on a psychedelic adventure through multiple dimensions as he grapples with the legacy of a dead folk legend. Inspired to develop his stage persona, Francis’ adventure of cosmic self-discovery will take him to alien world full of bright, brilliant, living sets with a kick-ass rock energy that never waivers.

Played from the perspective of a side-scroller, The Artful Escape is an expression of artistic brilliance that looks and sounds like a rock opera at every turn, never ceasing to deliver epic set pieces during its brief three-to-four hour runtime that encompasses platforming and rhythm elements.

As soon as The Artful Escape begins, it’s difficult not to be instantly mesmerised by its stunning art direction. The story is as fast paced as it’s energetic soundtrack and quickly takes the player, as Francis, through different dimensions that are nothing short of a visual marvel. They are bright, flashy, and essentially living sets that come to life through the power of Francis’ music. 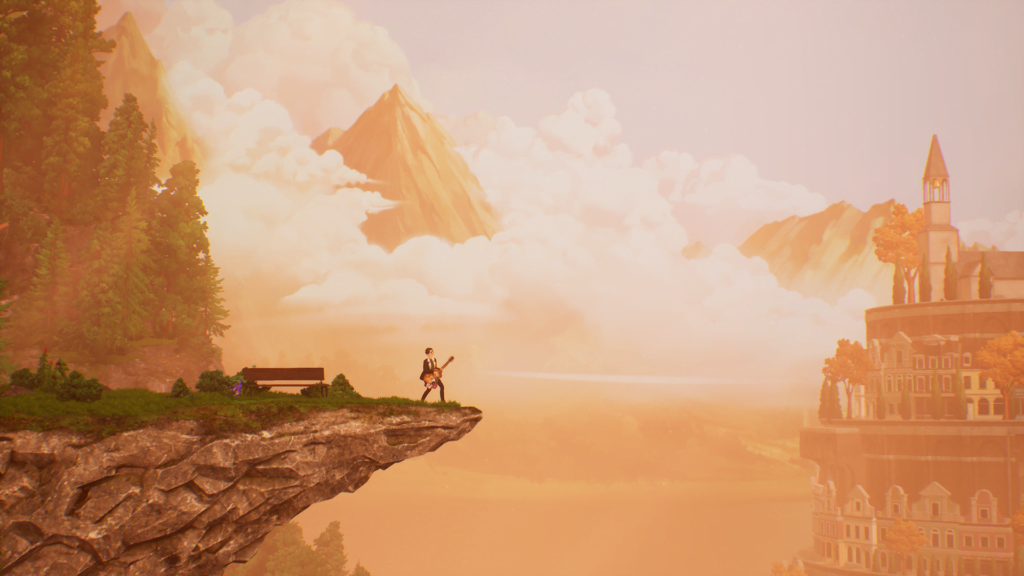 Whisked away through the very fabric of space by an alien named Zomm, who, might I add, cuts an amusing figure as a floating brain-in-a-jar-for-a-head. Giving Francis a guitar and a super-slick bodysuit to replace his not-so-rockstar pyjamas. Suited up and guitar in hand, what follows is nothing short of magical. 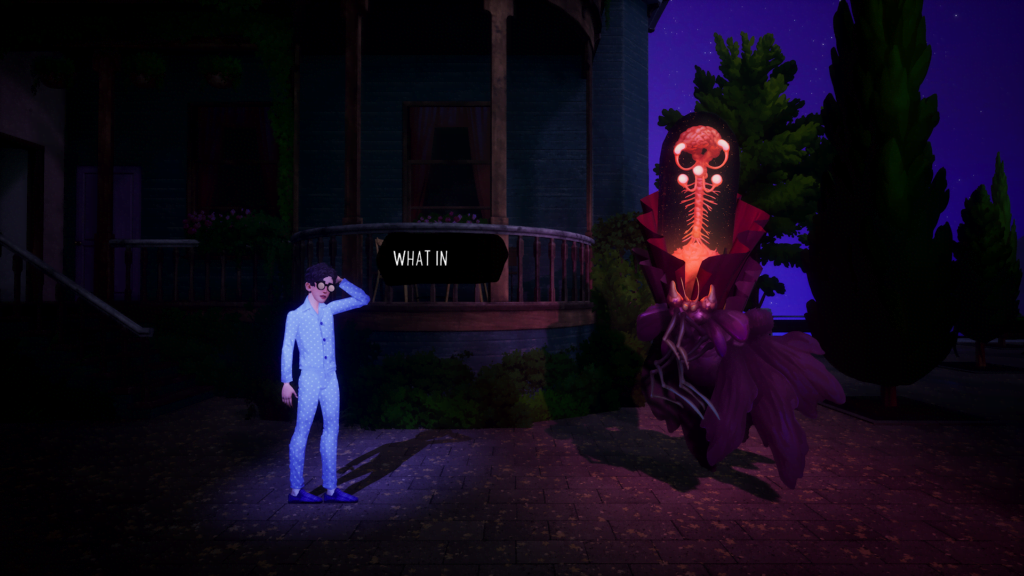 The characters that Francis meets on his space rock odyssey are so diverse, creative, and weird. Most of the aliens naturally speak English but there’s a handful that make weird noises, talk in saxophone sounds or even outright scream at him. Playfully quirky character design keeps things fun as more often than not Francis simply passes them by, striking chords of cosmic brilliance as he does. Dialogue options are available for most conversations and the lines to choose from are typically comedic or sarcastic, as are the responses they elicit. There is a fair amount of dialogue so it’s a pleasant surprise that it’s enjoyable and entertaining. Where The Artful Escape gets its most vibrant and exciting visual juices flowing is with its jaw-droppingly stunning environments. Whether it’s a jungle, desert or sci-fi cityscape for instance, developer BEETHOVEN & DINOSAUR have taken these simple locales and brought them to life in every way possible. Plants and alien wildlife spring to life, typically releasing stunning flashes or beams of light and ships whizz by like a mobile strobe light unit. Every single location is like a musical stage and everything within it serves to put on an unforgettable light show. 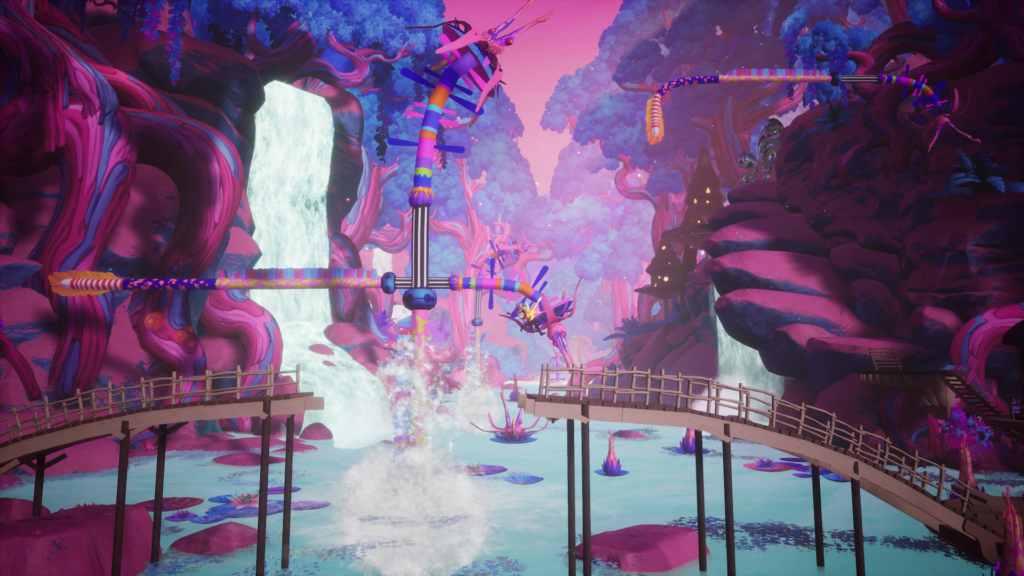 As far as the gameplay goes, things couldn’t be simpler. Running through the worlds jumping, air-kicking, and sliding while able to continuously hold a dedicated shred button to play the guitar on the go, emphasising the performance aspect of The Artful Escape as the priority of the experience.

The platforming is extremely simple and fails to distract from the epic soundtrack playing in the background, added to as often or as little as the player wants with Francis’ guitar. Striking these chords illuminated essentially everything and everyone in the environment as he passes them by, literally turning every location into a continuous light show. Shredding on the guitar, regardless of stopping and starting, seems to always pick back up in tune with the underlying soundtrack which lends to a seamless audio experience that makes the experience so special. 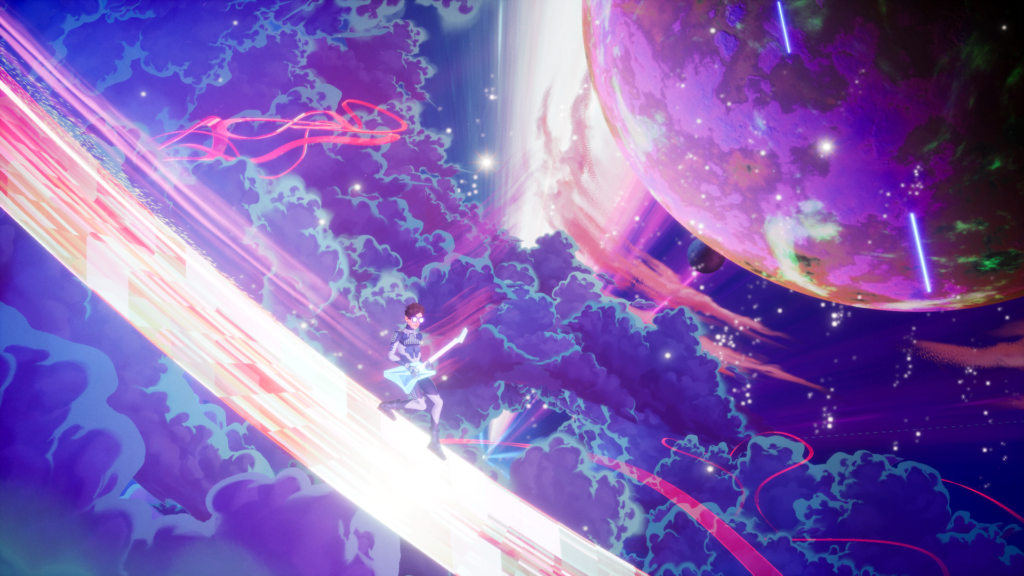 If the gameplay sounds a little too simplistic, that’s because it is. Platforming in its most basic form, nearly continuous running from the second the game is started until its credits roll and limited character interactions throughout, the meat of the gameplay in terms of depth exists in the jam battles.

Not unlike Simon Says, these duels against ‘bosses’ for lack of a better term spice up the gameplay with its rhythm, call-and-response type approach. There are five buttons that can be pressed and these ‘bosses’ cleverly have that configuration incorporated into their designs. They will illuminate in a particular order that the player must then match exactly. These are pretty straight forward, though as the game progresses, they do get faster and that’s where mistakes tend to get made. Luckily, there is no consequence for making a mistake and the sequence will be played again until the player nails it. The foresight to remove consequence from the gameplay has allowed the developers to provide a seamlessly immersive experience that avoids frustration from setting in. Overall, the gameplay does tend to feel a little repetitive towards the end but as the adventure will take four hours at most, it doesn’t have time to settle in and spur the experience.

Customisation becomes available towards the end of the game that opens up some fun and appropriate freedom as far as kitting out Francis in attire to resemble their desired persona. Some KISS inspired faceprint in particular is fun to play with but there are a wide variety of options to choose from that include pants, shirts, jackets, gloves, bodysuits, and face-paint. 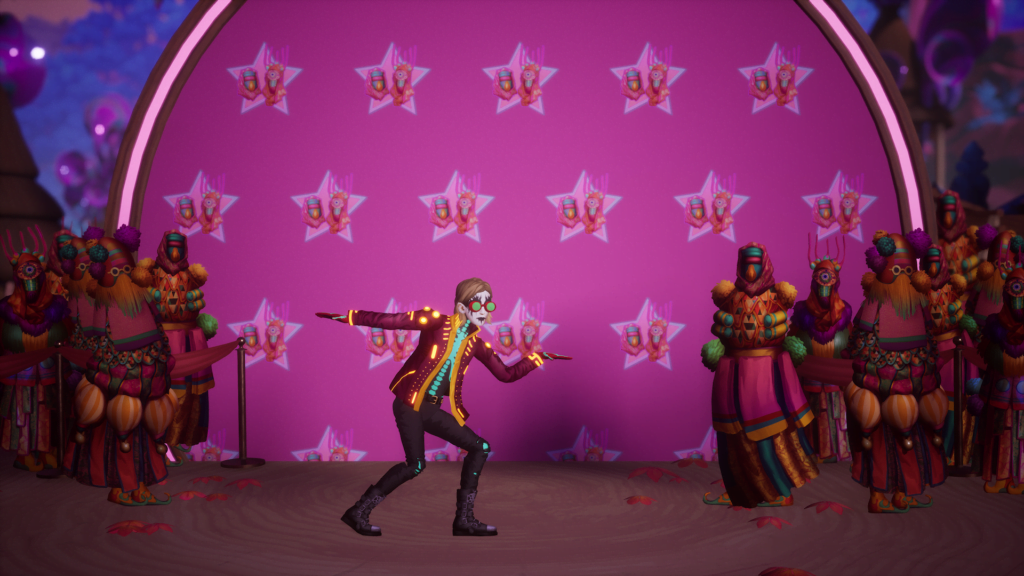 The use of stunning lateral tracking shots pulls the camera back as Francis continues forward to the right, capturing the insanely beautiful environment and the light show triggered from the guitars thunderous chords. It’s mesmerising, awe-inspiring and pretty unforgettable. The camera tightens up and gets in close when passing through hub areas but it’s the moments where there is nothing but Francis and the open space-road, so to speak, that lets The Artful Escape tell a visual story worthy of its excellent audio counterpart. 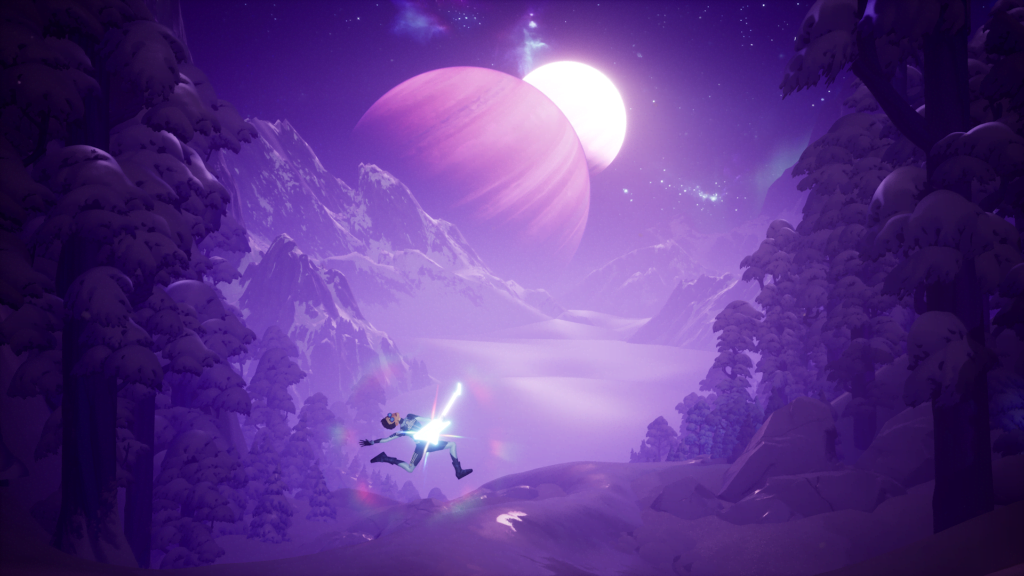 The Artful Escape is a visual delight and an audio treat, period. Creativity bursts from every seam of the striking environments and transformative illumination in everything blessed by Francis’ every strum bring the world to life in a way that simply needs to be experienced to be believed. It’s a one-of-a-kind experience that won’t likely be forgotten by the player long after curtain’s been called. It may be short and it may be simple but there is absolutely no doubt that it is one of the most joyful experiences to be had in a video game.

+ Francis’ control over visual cues with his guitar

– Gameplay is far too simple 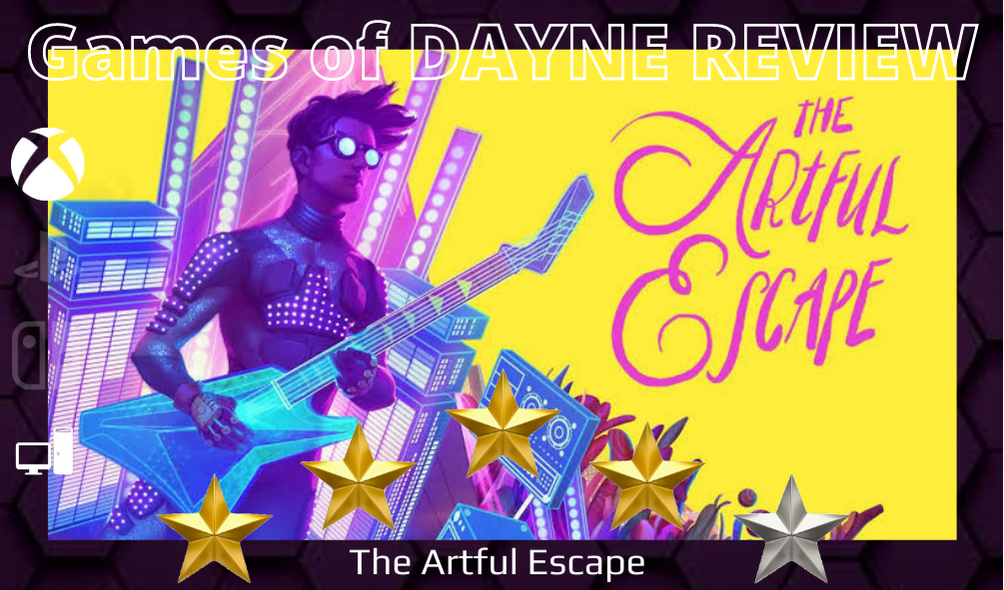