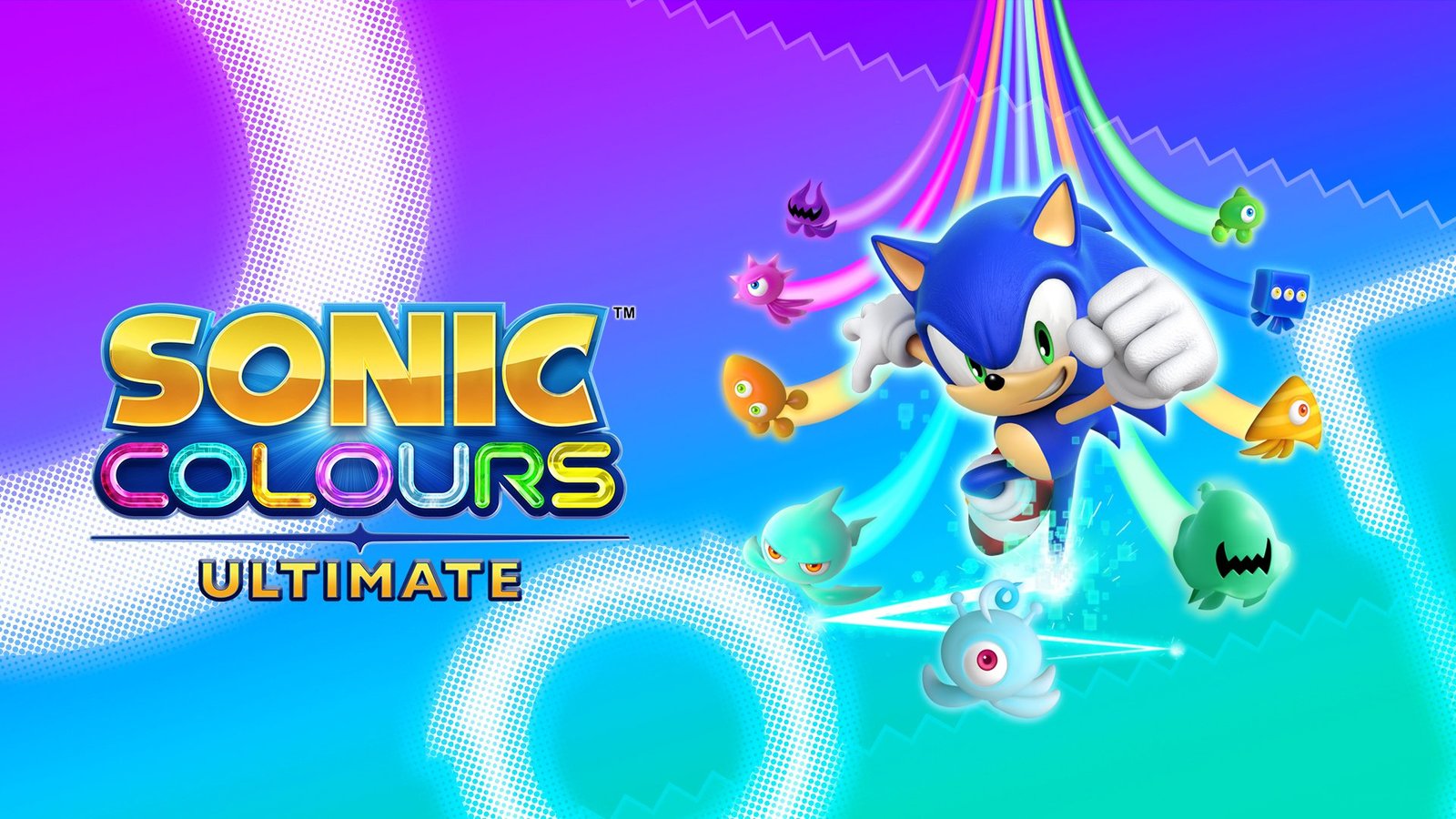 Nearly 11 years after originally launching on the Nintendo Wii, Sonic Colours returns as Sonic Colours: Ultimate, remastered for all platforms with a snazzy remixed soundtrack and technical improvements. Packed with plenty of customisation options and additional modes, Sonic fans can relive this fast-paced adventure or experience it for the first time on their platform of choice.

The maniacal Eggman (or Dr. Robotnik) has created an amusement park in space to harness alien energy and use it as fuel for a mind-control weapon and it’s up to the ultimate tag team of Sonic and Tails to thwart him in this super-speed adventure.

The trend of Sonic and Tails versus Eggman isn’t going to surprise fans of the franchise though it manages to remain enjoyable and entertaining despite the premise feeling extremely exhausted. With a plethora of robotic goons to do his evil bidding, Eggman throws every obstacle at Sonic and Tails across seven locations that are comprised of seven stages each, the final being a boss fight. 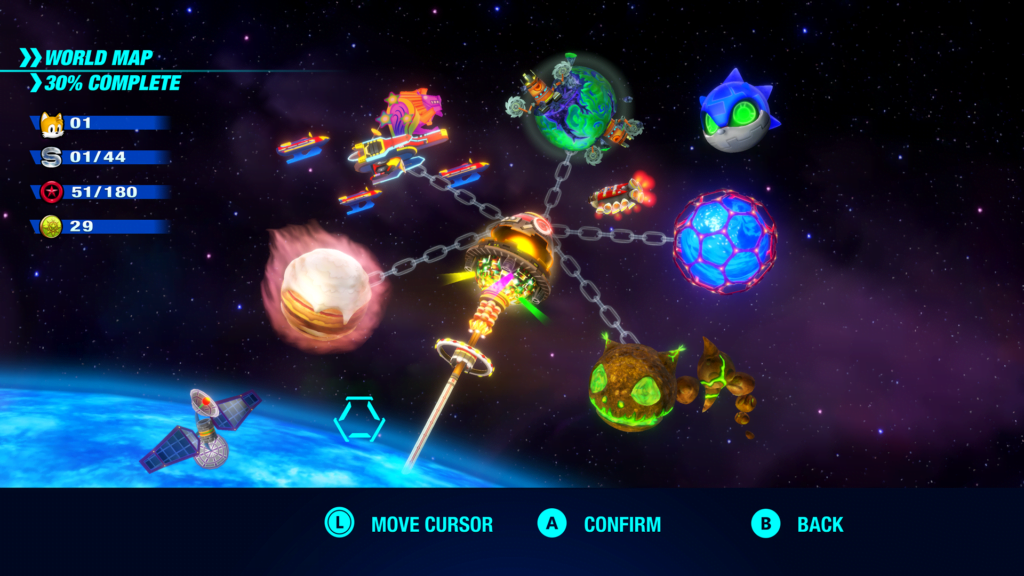 Simply racing through the story will take as little as four-to-five hours though each stage is littered with Park Tokens to collect which can be spent on cosmetic alternatives for Sonic’s gloves, boots, aura, boost, and player icon, which encourage the player to return so they can customise their Sonic. 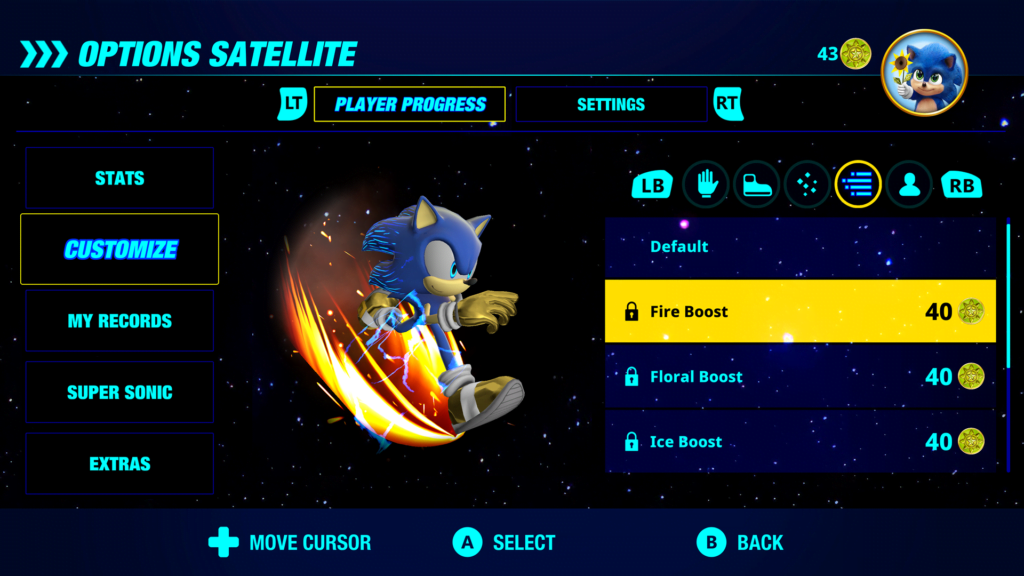 180 Red Rings are also hidden throughout the game, with five in each stage and none in boss stages. Some can only be obtained by returning later, that unlock new stages in the Game Land mode. The goal of this mode is to unlock the seven Chaos Emeralds which allows Sonic to transform into the epic, golden Super Sonic. Each Chaos Emerald is unlocked by completing all three stages assigned to each of the coloured emeralds. 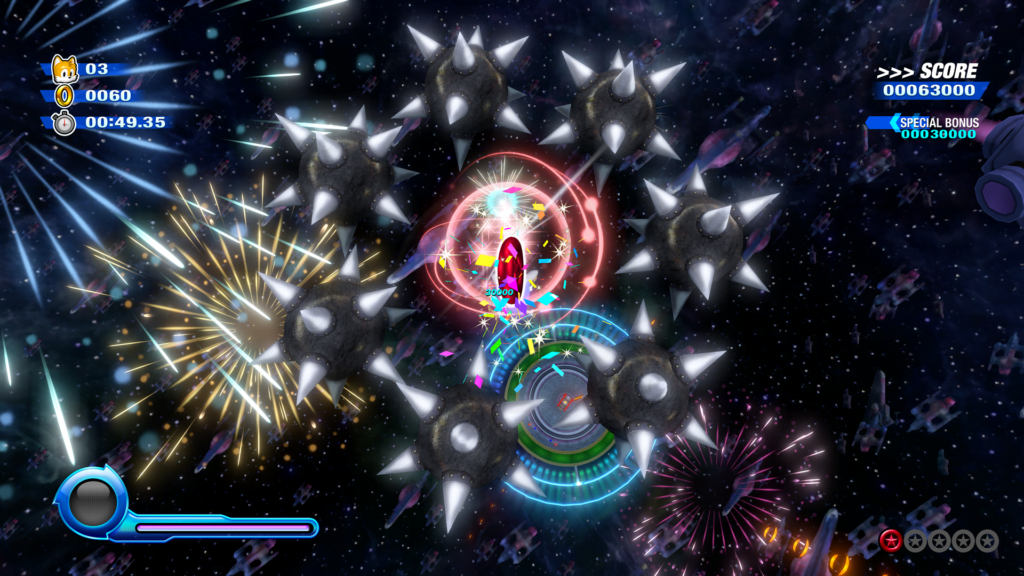 Aside from replaying levels to find Park Tokens and Red Rings, an additional mode is available called Egg Shuttle which tasks the player with completing each location as fast as possible. Additionally, collecting 15 Red Rings in each location will unlock a special race against the fan favourite Metal Sonic. Sonic titles have always been designed with replayability in mind so it’s great to see new modes that can be unlocked or worked towards outside of completing the main story.

Eggman’s plans are centered around cute alien lifeforms known as Wisps. These Wisps come in a variety of nine colours and each one, when collected, acts as a power-up for Sonic as follows; 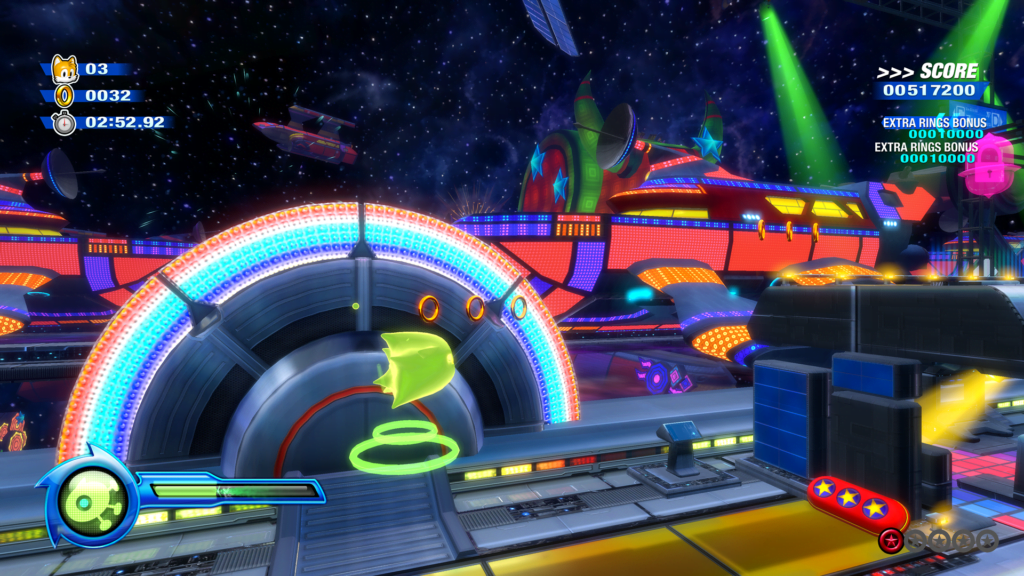 The Wisps are fun narrative inclusion that also impact the gameplay and puzzle elements of the experience in ways that are enjoyable to experiment with. They are also instrumental for completionists attempting to find every Red Ring on their path to unlocking Super Sonic. Aside from the fun of changing forms, the Wisps allow Sonic to do what the franchise does best, they continually up the pace of the gameplay and open up new paths to reach the end of the level. As new Wisps are discovered throughout the story, replaying earlier stages is where the fun really kicks in as they become available to be used the next time around.

The core gameplay is very fast-paced and has players simply trying to reach a giant ring at the end of the stage to progress to the next, taking longer if looking for Red Rings and Park Tokens. Sonic for the most part is on a path straight forward that is laced with rails to grind, platforms to jump, environmental hazards to avoid and enemies to destroy.

Power-sliding and drifting is fun in the circular, track-like beats of some stages and having to time jumps with moving platforms always adds an element of danger in fear of falling off. Falling off the stage or taking damage while in possession of zero rings simply returns Sonic to the previous checkpoint or, if Tails Tokens have been found, Tails will swoop in to save the day and return Sonic to the start of the section instead. Overall, the gameplay is pretty simplistic, the challenge comes when players are searching every nook and cranny for the collectibles. 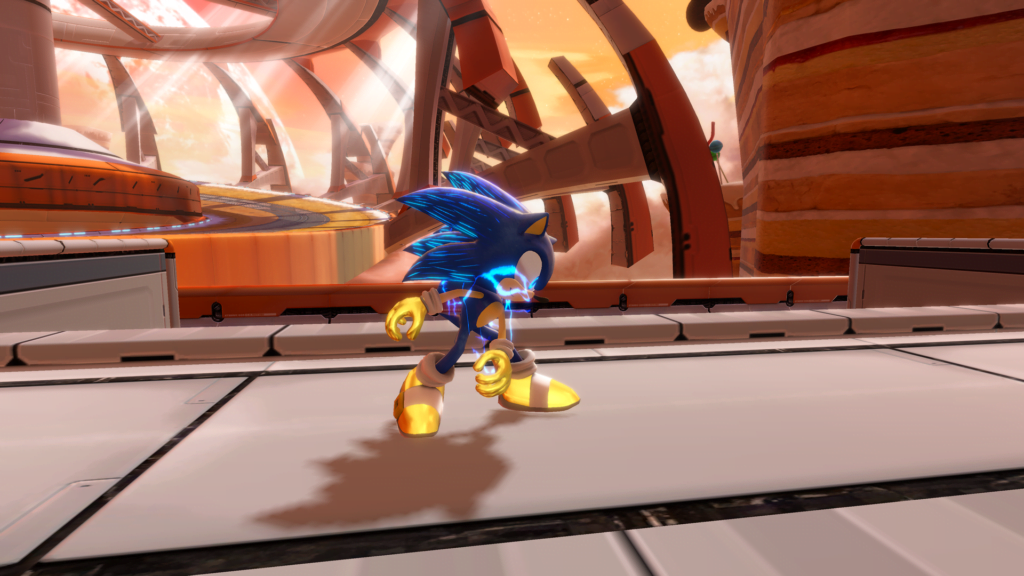 Boss battles are back in typically fun Sonic fashion and in most cases require the player to simply dodge attacks until an opening appears to attack the boss, repeating the process until the enemy has been defeated. These are just as cool and welcome as those that have come in previous entries, throwing something a little different at the player to round out the adventure that has taken place in that location before moving on to the next. 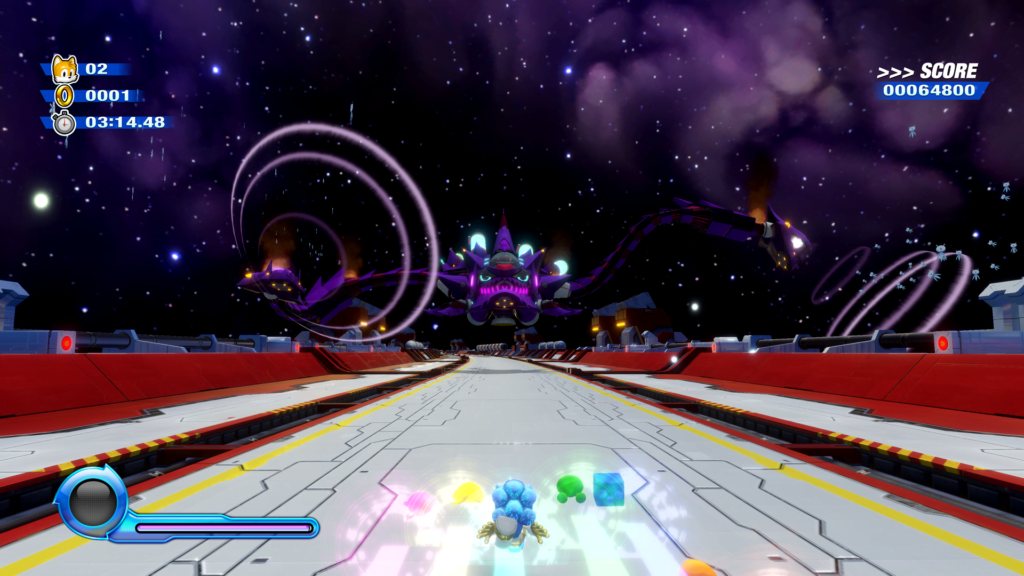 Sonic Colours: Ultimate nails the environmental landscapes that our favourite blue hedgehog speeds through, offering up a diverse variety of creative backdrops that are vibrant, charming and fun. Sweet Mountain stands out as the most playful of the locations as the world is wonderfully brought to life with sweets and cakes to create the stunning environment. The Aquarium Park presents fun new ways to splash colour on the presentation, as does the striking Asteroid Coaster branch of Eggman’s evil amusement park.

The updated visuals are beautiful and Sonic Colours: Ultimate presents the most stunning Sonic world to date. Considering the speed at which most of the stages are passed by at the visuals and animations are sharp, clear, and truly feel fast in a way few games that aren’t fronted by the iconic hedgehog can capture. Combining the original soundtrack with newly remixed variants comes together to result in an energetic, upbeat, and constantly motivating manner and the sound effects are just as charming as Sonic fans can expect. Disappointingly, the cutscenes were not given a makeover and they are noticeably dated when transition in and out of gameplay. They are stull fun and enjoyable, they just stick out. 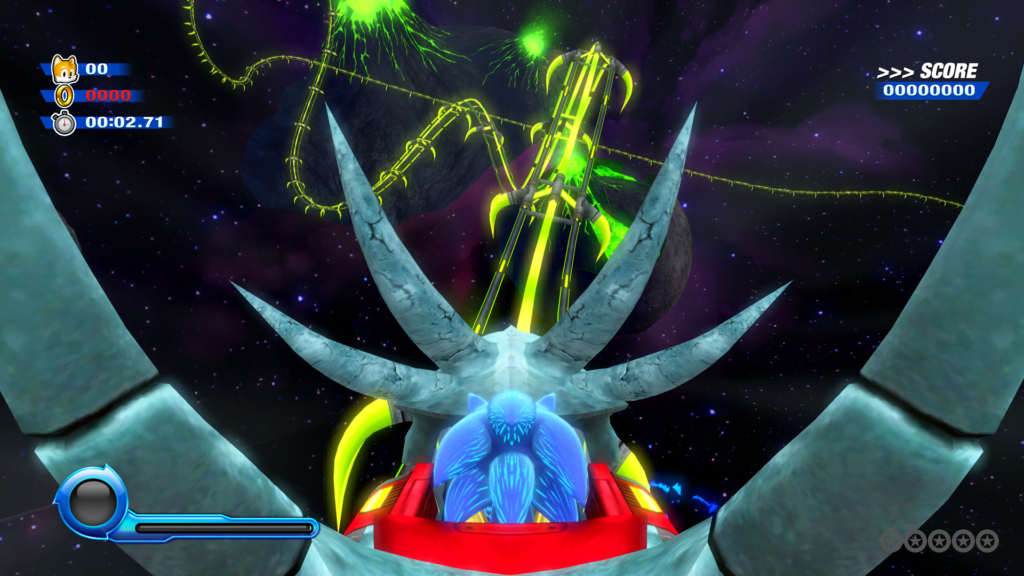 Sonic Colours: Ultimate is a wonderfully bright and energetic adventure that may have been missed by many when the original released over a decade ago, myself included. New and returning players have a lot to love in this remaster and enough content to justify revisiting it after the story is finished. Sonic fans and players of all ages can enjoy this experience in all of its enhanced glory on every available platform. 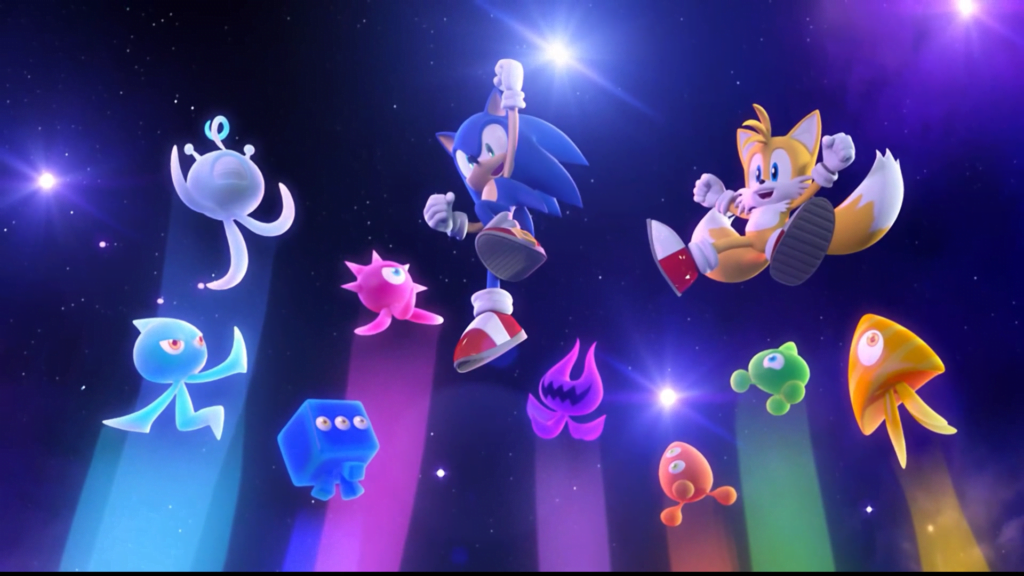 + Entertaining story and banter between characters

– Co-op would have been nice to have 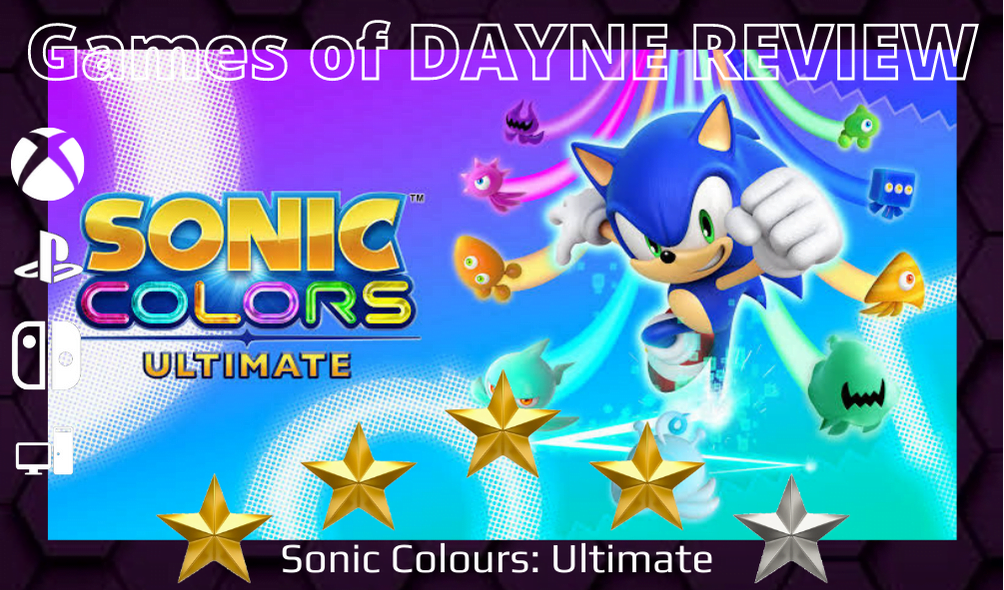 * A digital code was kindly provided by the Publisher to One More Game and reviewed by me, as a member of their team *