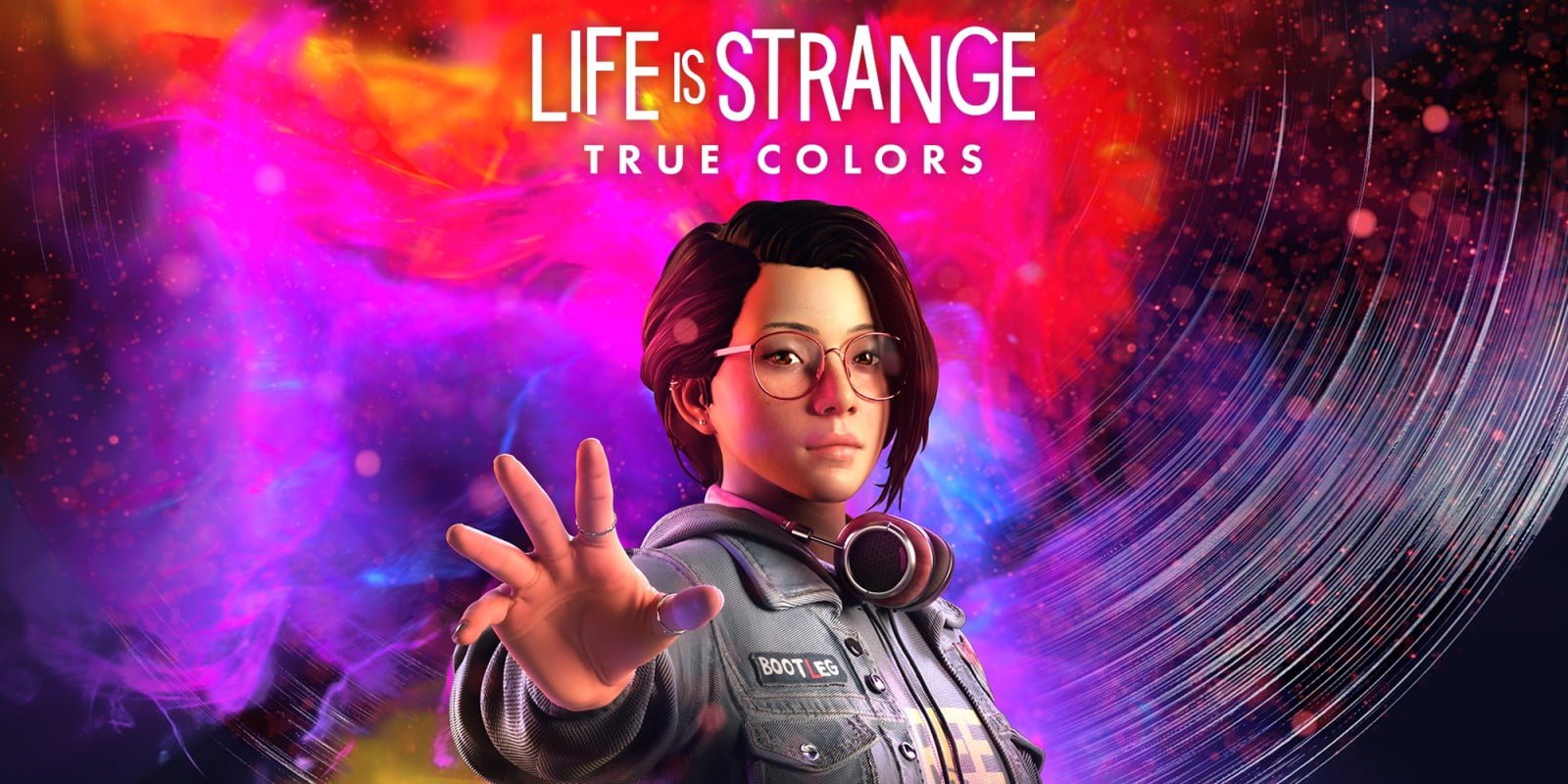 The supernatural, emotional and choice driven narrative world of Life is Strange returns for its fourth entry, bringing a new protagonist and ability in Life is Strange: True Colours. Alex Chen is reunited with her brother Gabe after 8 years apart. Joining him in Haven Springs, Colorado after spending that time bouncing around foster homes and at the Helping Hands Group Home in Portland, Oregon. With so much time apart, they have a lot of catching up to do while Alex must wrestle with her empathic ability that allows her to feel the overwhelming emotions of those she comes into close contact with.

As always with the series, a well-developed supporting cast keep things interesting for Alex, opening up romantic options and actions that lead to decisions with impacts to be felt in the near and long-term course of the story. With her ability, or curse as she sees it, Alex is the only one who has the potential to see the true colours of those who inhabit the peaceful Haven Springs.

Alex’s arrival in Haven Springs immediately establishes the gorgeous rural setting as one that is vibrant, beautiful, and quaint. The snow-capped mountains adorn the skyline, and the atmosphere of serenity is inescapably charming. The streets are littered with small, locally owned businesses and the town genuinely feels like one ran by its own people, seemingly lacking a corporate footprint.

Due to its remote and idyllic location however, Haven Springs has been home to mining operations and Typhon, the company responsible for this disruption, has a silent hold over the town that unravels throughout the five-chapter story. Unlike previous Life is Strange entries, the drip-fed episodic release structure has been abandoned though the format remains intact. Upon arriving in town, Alex is quickly introduced to all of the key characters that will play a part in the story though the brevity of these introductions leaves motives, intentions and allegiances ambiguous. At the conclusion of the first chapter, tragedy strikes, claiming the life of a beloved member of the community that shakes the foundation of the entire town, its inhabitants, and the story in ways that the player can influence via the wealth of decisions to be made over the course of the near 8-hour adventure.

The abolition of the episodic release structure certainly allows the story to flow better without the momentum being brought to a crashing halt, with questions and cliffhangers being weeks or months apart. True Colours however still manages to have pacing issues despite its singular, all-inclusive release. The second chapter is comprised of what feels like filler for its entire duration outside of the opening and closing 5-10 minute cinematics.

Chapter three brings levity and a bit of humour into the fold with a unique LARP (live action role playing) event. It feels unnecessary, out of place and undermines the established tone of the events that precede it. This is followed up with a much more interesting penultimate chapter that unfortunately gets bogged down in bloated monologues and a disjointed structure in the finale that ultimately sends this entry out with a whimper, a shadow of the bang that is teased with its premise and opening act.

The overall narrative of True Colours feels weaker than all three that came before it but the emotions on display throughout are executed with precision and impact, justifying the inclusion of Alex’s power of empathy and the emotional toll it takes on her, and stands as the strongest in the series as far as the tidal wave of emotions experienced by Alex and the player. 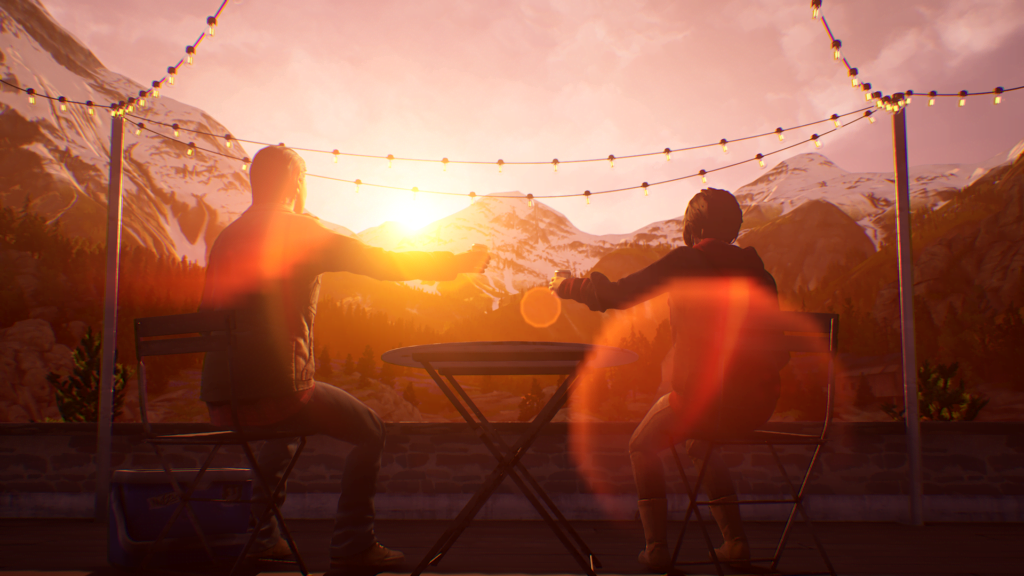 With emotions at the heart of True Colours, Alex’s journey exposes her to the deepest levels of anger, fear, sorrow, and happiness, with each emotion interwoven into the story and the affected characters with such purpose and resolution. Alex’s ability allows her to visualise people’s emotions as a coloured aura, with a red aura representing anger and blue for sadness for example.

This isn’t just limited to the heavily cinematic sequences of True Colours as the player can manually initiate Alex’s focus to a key character’s aura and experience what they are feeling, often resulting in new dialogue options to take certain conversations in new directions required to progress. If Alex gets to close, she can feel the full extent of these emotions and they consume her, for instance, leading her to lashing out at her friends or being overcome with fear and paranoia.

Alex has lost control before arriving in Haven Springs and is fearful of how she might react if placed in those situations in her new home, though it is her courage and desire to help people that allow her to willingly give in to some of these emotions and sacrifice her own well-being to relieve other characters from their emotional turmoil. 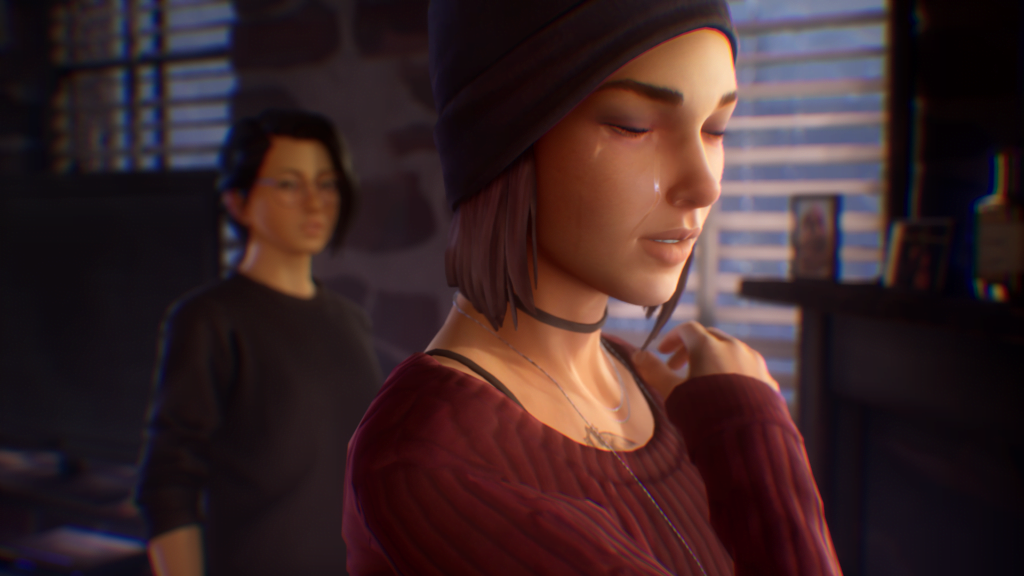 As an experience so heavily guided by the emotions of its characters, Life is Strange: True Colours absolutely nails the performances of its cast. There is an authenticity and weight to the emotional outbursts, from one extreme end of the scale to the other, that adds incredible layers to the immersion of the story and the emotional situations at hand. The cast across the board deliver solid, hearty performances that should hopefully encourage empathy from the player as it does Alex.

A beautiful new art direction accompanies the voice performances with animation and character models that finally feel believable and more accurately display emotional vulnerability, dismissing the stiff and wooden animations and facial expressions that have held the series back in the past. Witnessing a character trembling in fear or distress or shaking with rage pulls on the player’s emotional strings in a manner that didn’t quite work as effectively before it. True Colours abandoned the episodic release structure, introduced a new art direction, and implemented animations that feel authentic, proving that change was necessary and ultimately delivered the most polished presentation in the series since it began in 2015. 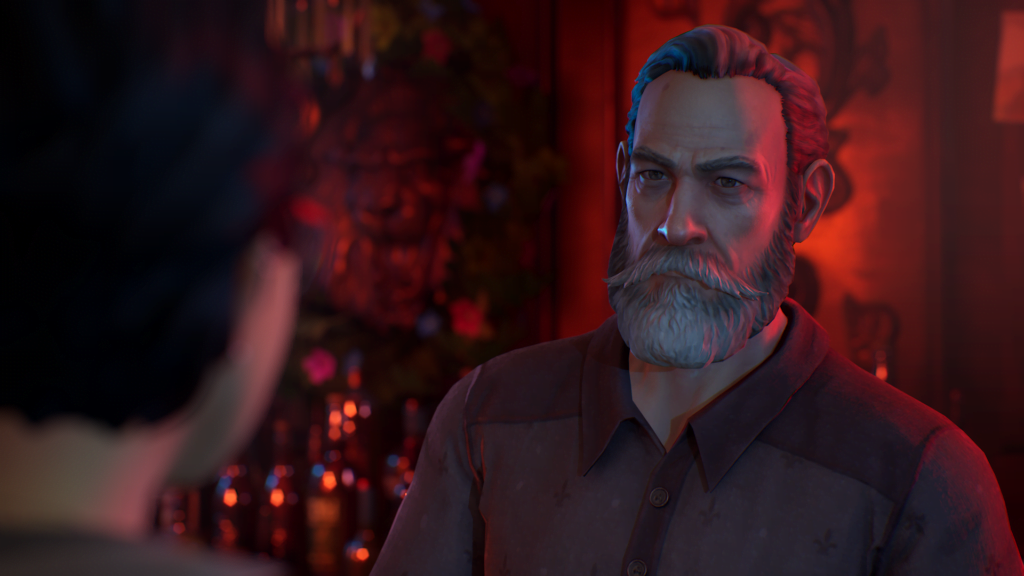 The gameplay for the most part remains familiar to those who have played previous entries in the series. In between the heavily cinematic story beats the player is tasked with walking around, talking to people and interacting with things within the environment, typically searching for key items required to give to other characters to push the story forward. Alex’s main and optional objectives can be accessed at any time by using her mobile phone. The phone is home to the quests, text messages and group notifications from the townsfolk. Oddly, it serves no real purpose outside of checking quests. Messages can’t be sent, calls can’t be made and for some reason, pretty much everyone in Haven Springs is messaging Alex, sometimes before she even meets these characters in the story. The dysfunctional and pointless implementation of the phone is a curious concept.

True Colours offers the most freely explorable playable area in the series to date. At almost any time the player can wander the streets of Haven Springs, enter a handful of stores, and start conversations with people. The freedom is a welcome change though it doesn’t feel quite as meaningful as it could. The introduction of missable side quests tries to justify the new-found freedom but they are far too short and in significantly short supply to fully feel like necessary inclusions. Easily the most enjoyable aspect of the freedom is to be able to soak in the glorious setting it plays home to. Developer Deck Nine Games have done an incredible job bringing Haven Springs to life in a way that is unique to the series and is simply gorgeous start to finish. 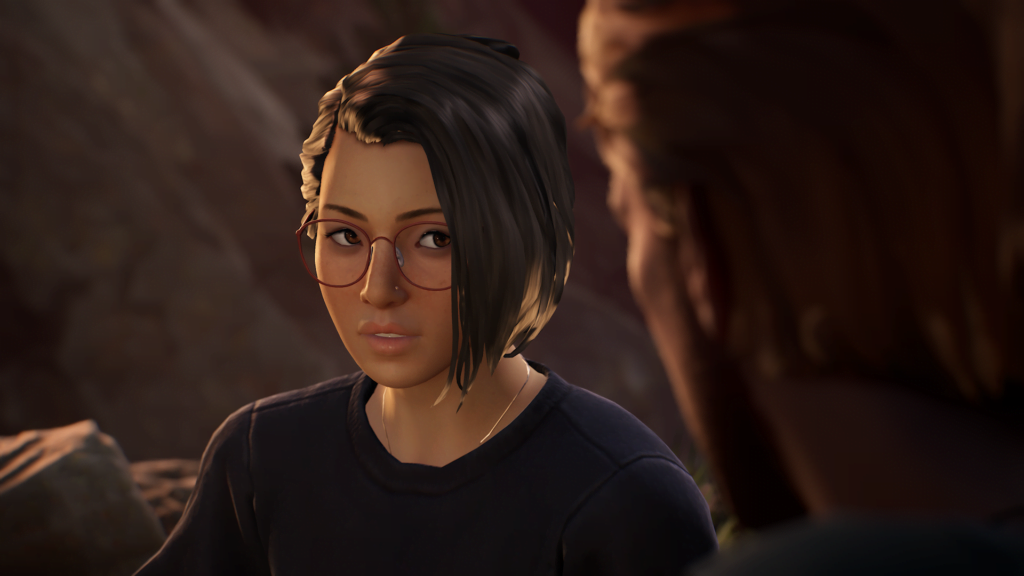 For fans of the series, it almost goes without saying that the score is haunting, beautiful, and intimate. Acoustic melodies and a sprinkling of vocal performances that do their best to draw a tear from the player are so well executed, fully integrating into a key foundation of what allows Life is Strange to consistently deliver such emotional charged stories. The focus and attention to detail in regards to music has always been flawless in the series and it’s incredibly satisfying to see it emphasised again in this latest offering. 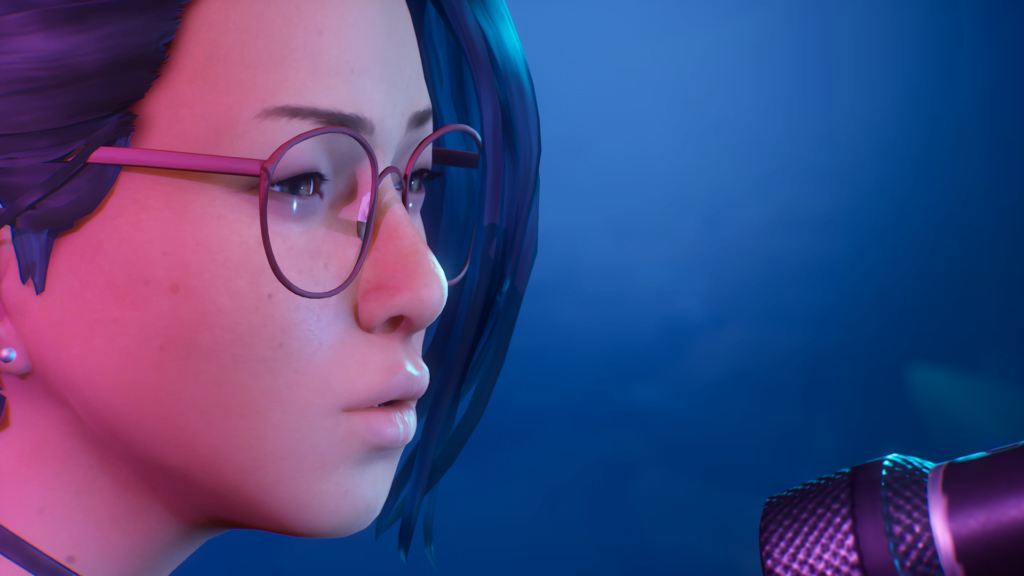 Life is Strange: True Colours nails the emotional highs, stumbles into some pacing lows but ultimately offers the most emotional impact the franchise has ever seen. Character performances are moving, the narrative twists and turns are for the most part unpredictable and the visual flair has kicked into overdrive, lending to the overall believability of the characters, the atmosphere, and the emotions at play.

Despite the pacing issues and sense of filler, particularly in the middle of the game, True Colours tells a story that matters, one that is wonderfully made to feel as gut wrenching for the player as it is for Alex. Life is Strange reminds its audience that it can still deliver the hard-hitting stories and strike a chord with its players from all walks of life, levels of gaming and familiarity with the franchise, and manage to outdo itself all in the one experience. 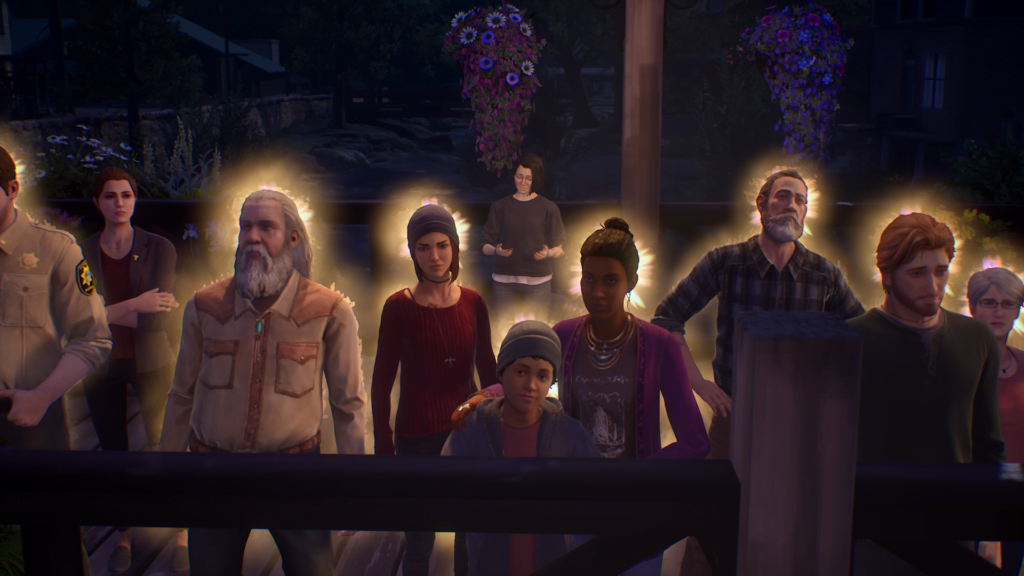 + Emotional performances from the cast

– Unnecessary filler in the middle act