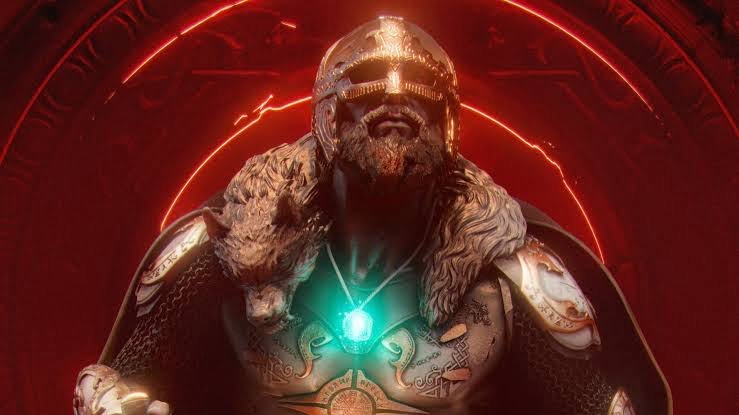 Opening with a village engulfed in flames, the corpses of its inhabitants lay strewn throughout as a lone Viking fights through its destroyers to find their loved one dying. Given a special necklace that once belonged to the gods, the nameless player takes on their loved one’s dying wish to save their people in the side-scrolling epic, Song of Iron.

With axes, swords, shields, a bow, and godly abilities to assist the player on their quest for vengeance, Song of Iron is a stunning experience brought to life by solo developer, Joe Winters. Visually beautiful and aided by an epic, harrowing score, the experience is memorable and enjoyable, a quest befitting of a Viking hell bent on painting their path with the blood of those who stand against him.

The first thing to note is that it’s impossible to talk about or experience Song of Iron without immediately being drawn to the beautiful visuals. The world this game takes place in wonderfully realises riverbeds, caverns, snow-capped mountains, lush fields, and ravines that are so striking and atmospherically consuming. Each new area draws the player into the dark and gritty tone of the story, playfully animating it with gorgeous lighting and reflective water that adds layers of depth to the authenticity of the experience. 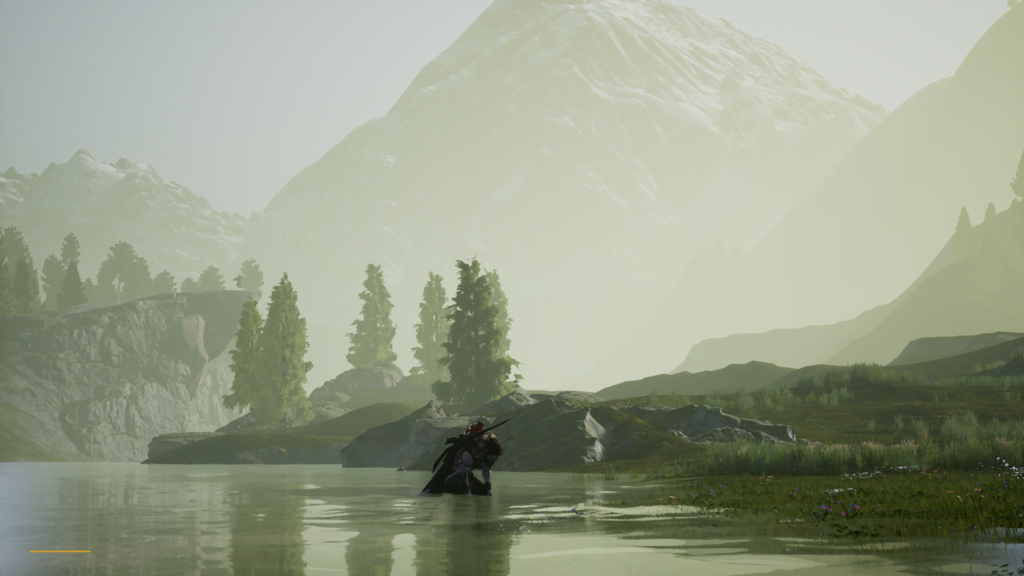 A sense of loneliness is atmospherically present at all times, while the world never feels empty, the narrative journey of the nameless protagonist, which can be either male or female, truly feels like it is one versus all, them against the world. The visuals take the first steps in setting up the tone of the world, the story, and the tension the player is always surrounded by. 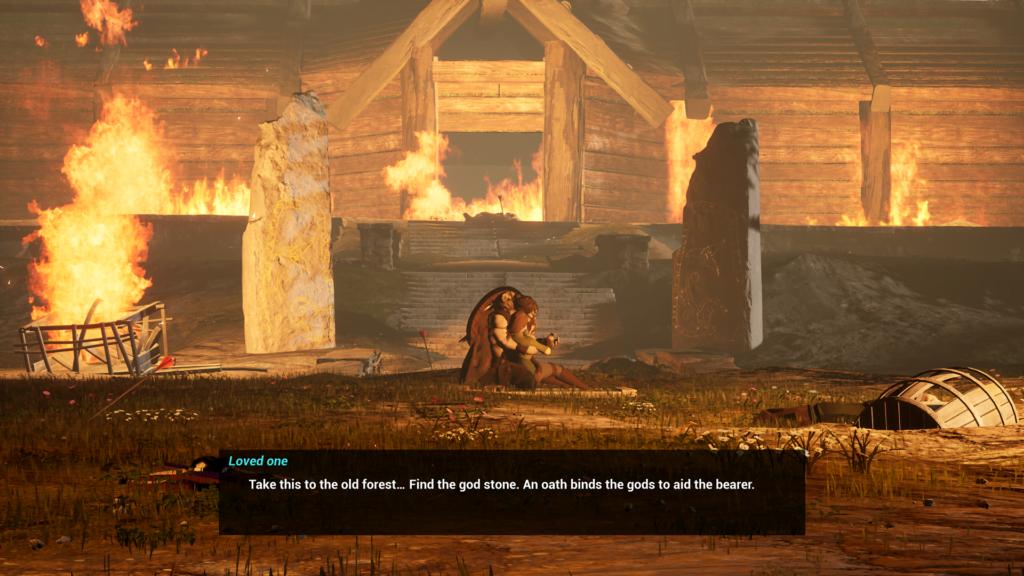 The gameplay is cleverly simplistic. Melee and ranged attacks are complimented by a shield block and dive roll system to easily navigate the enemies and the battlefield. Melee attacks can be charged to inflict additional damage and break shields, the bow and arrow is great at clearing enemies at a distance and the axe throw is a lot of fun to play with. It all comes together to create a simple and accessible experience that is only faulted by poor controller mapping. With no option to set the buttons to the player’s preferred layout, it doesn’t feel as seamless as it could. 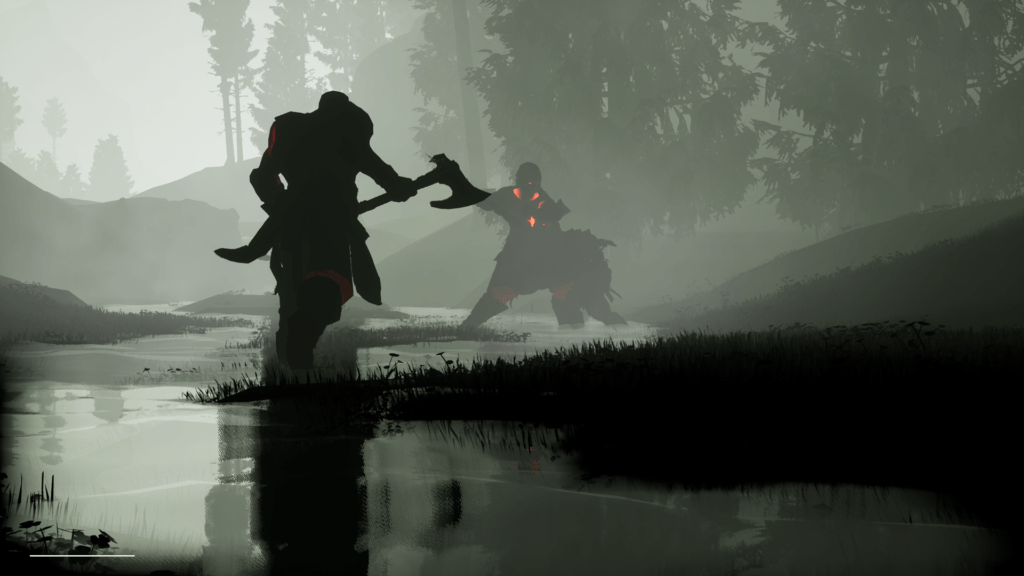 A handful of story related upgrades are introduced that add elemental effects to the gameplay such as the ability to ignite the melee weapon and turn it into a burning tool of destruction, summon electricity to shock the enemies and even summon the axes after it has been thrown, not unlike the legendary Thor. These are very fun to play with and add a mythical layer to the otherwise grounded experience. 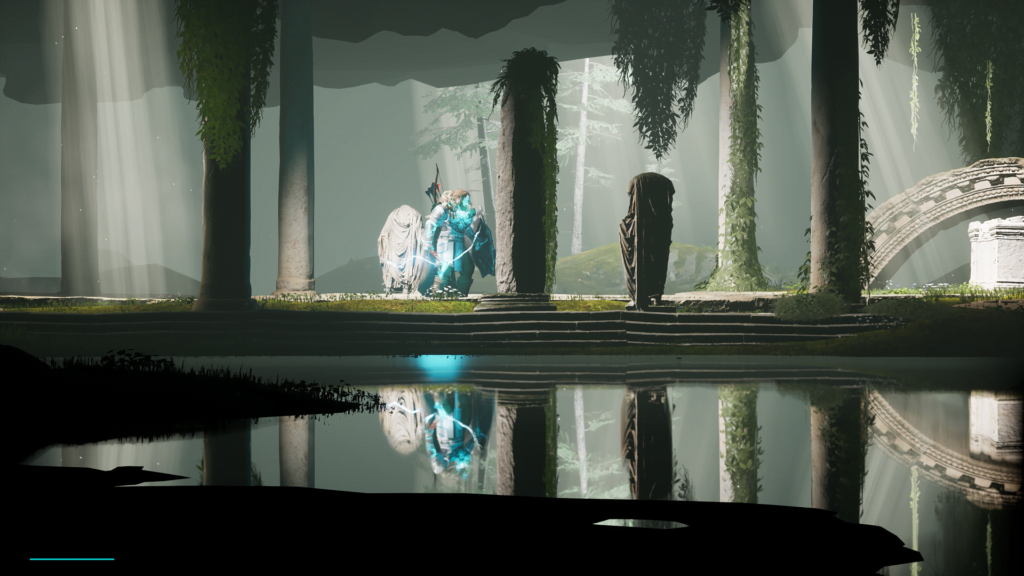 Aside from cutting through the competent variety of enemies, which includes the likes of typical warriors, trolls and giants, platforming and light environmental puzzle solving is peppered throughout the approximately three-to-four-hour adventure. Climbing short ledges and vine walls, jumping gaps, and crouching through low areas doesn’t feel like a chore, nor does the moving of large boxes to climb in order to reach higher plateaus.

One thing that Song of Iron nails is its understanding that less is more. From the gameplay, platforming, puzzles and even its story, the journey seamlessly transitions from combat to traversal while pushing forward with the rather loose, premise-only story. The story itself is well set-up though aside from interactions with the Norse god of thunder it doesn’t really evolve in a meaningful way. As far as the ending goes, it feels like one of those situations that players will either love or hate. I personally didn’t feel like it fit the world and the established narrative but at the same time, it was undeniably interesting. Whether that translates to a satisfying conclusion is something I will leave prospective players to decide. 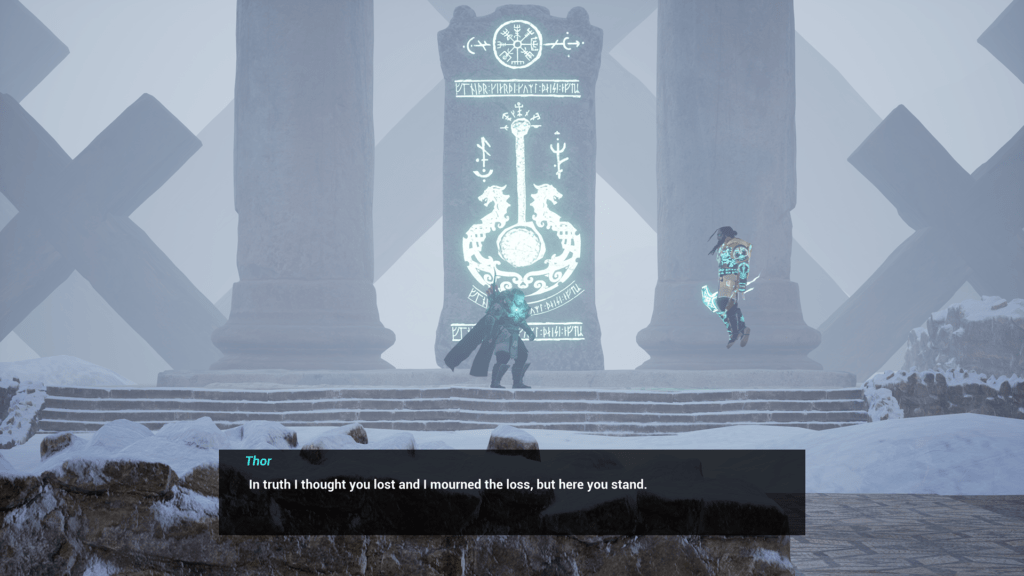 Throughout the entire adventure the ominous, epic, and haunting score accompany the player and instil a sense of war, adventure, and authentic Norse atmosphere. It was distracting at times, in the best of ways, to feel overwhelmed by the impact the score had on the tone of the game. There is little more to say than it was masterfully thought out and executed. Song of Iron is one hell of an adventure. It tells an interesting story, delivers a fun and simple gameplay experience, and is presented with visual flair and a ridiculously epic score to set the tone of a Viking epic. Despite the 50/50 ending and questionable control mapping it is genuinely difficult to fault Song of Iron and the effort made by the solo developer behind it. 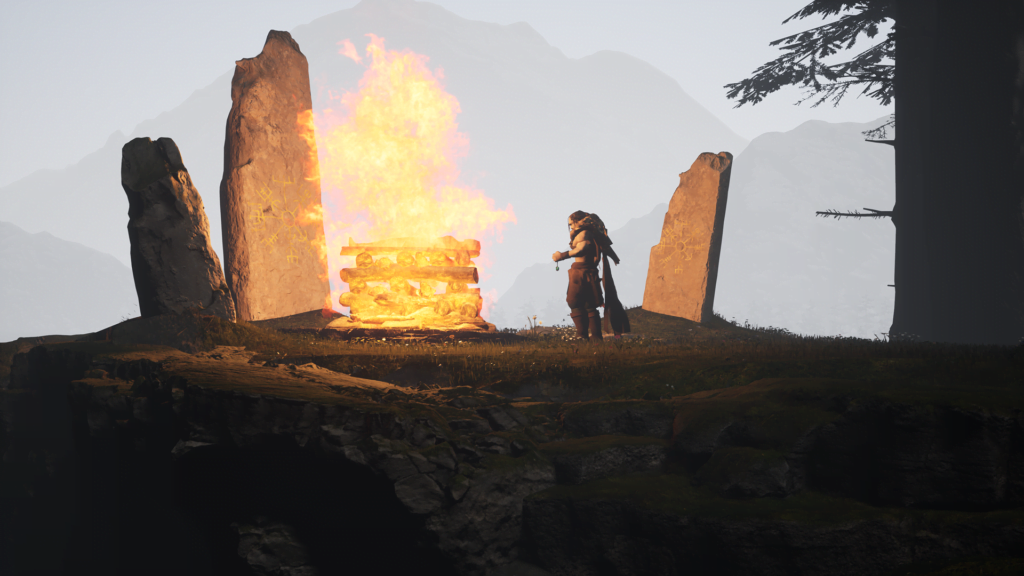 – Ending is likely to be divisive