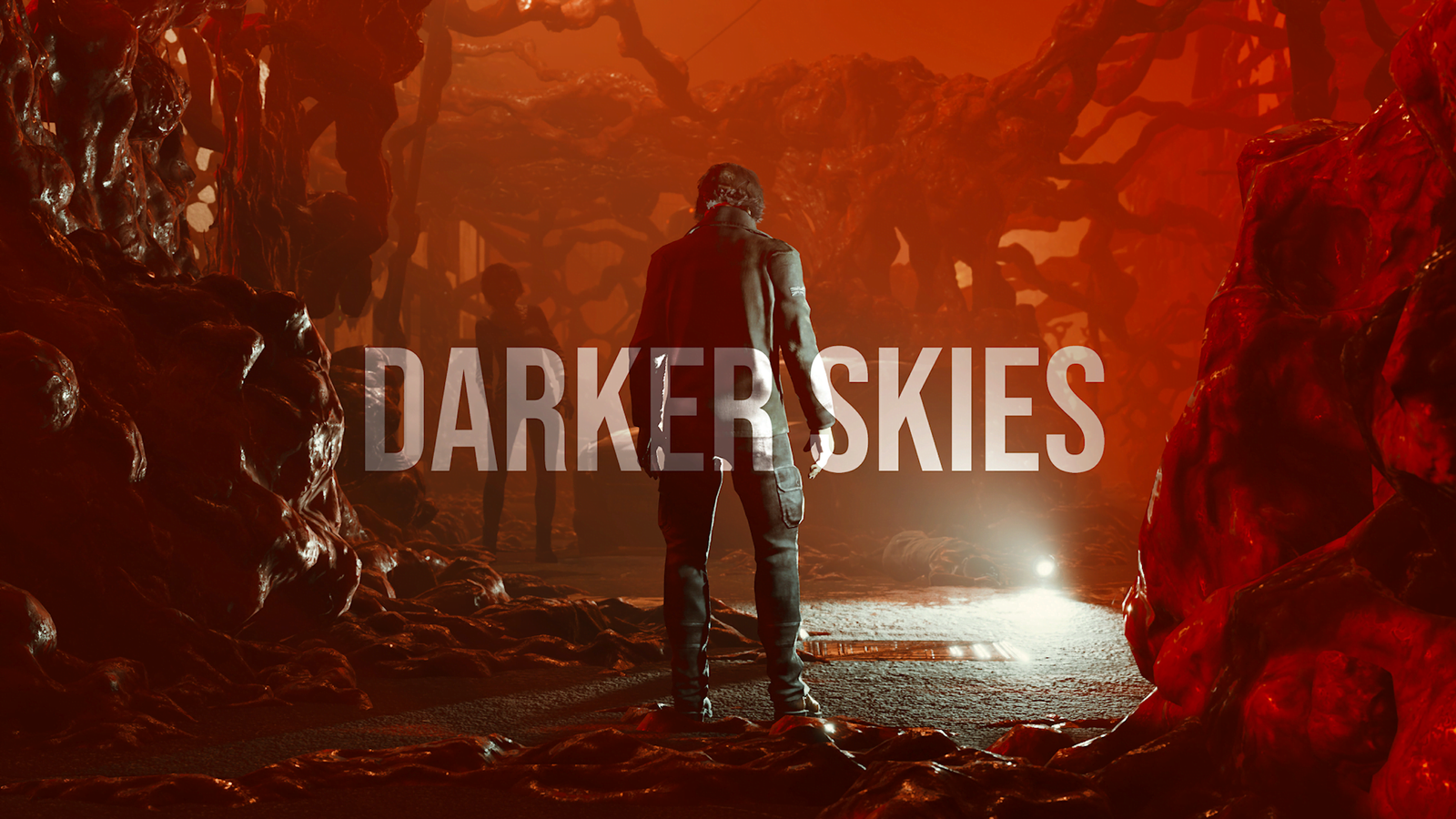 Darker Skies is the follow up to Grey Skies: A War of the Worlds Story (Review HERE) from developer Steel Arts Software. Inspired by the infamous works and stories of H.G. Wells, Darker Skies tells the tale of Jack, a survivor of the War of the Worlds, on his mission to collect the parts he needs to construct a heat ray, blast his way to freedom and hopefully find the means to restore civilisation.

The third-person survival-horror experience will take players through six locations collecting the components for the heat ray from the wreckage of the gigantic alien Tripod machines. Using stealth, crafting throwables and shooting through the remnants of the forever broken world, Darker Skies provides atmospheric tension at every moment but ultimately succumbs to an invasion of technical and design issues that even the Martians can’t overcome.

The story of Darker Skies lies exclusively in its premise and conclusion, with no cutscenes or a single character interaction to provide any context as to why Jack is building the heat ray, how he knows how to do so and why the task lays with him. The extremely brief 2-3 hour experience sends Jack to six locations that are all accessed from an underground tunnel system where his base resides. Four of these can be visited in any order while two are locked until later, with no indication of which until the player attempts to interact with its fast travel point. 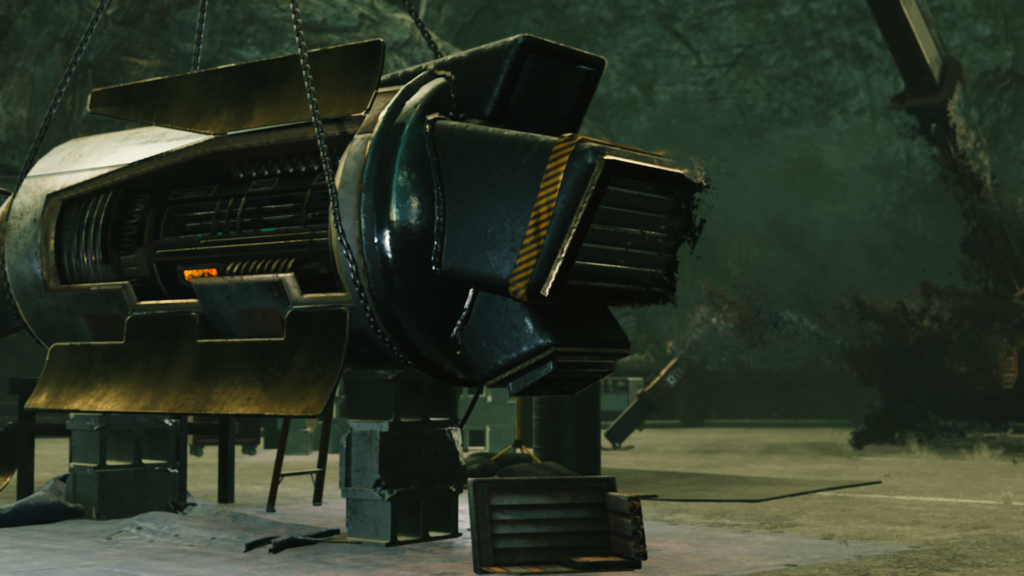 Exploring an old apartment building, prison, sports stadium, theme park, town and a plane wreckage in search for a single heat ray component in each is the objective of each mission. Scattered along the way are crafting components which can be found to create throwables such as smoke bombs and shock grenades.

Utilising these throwables is required to eliminate the corrupted, zombie-like enemies that roam the environment. Jars of water can be thrown and enemies can be lured into these puddles, allowing the player to throw a shock grenade into it and shock all enemies that may be standing in the puddle while using smoke bombs allow the player to move undetected. 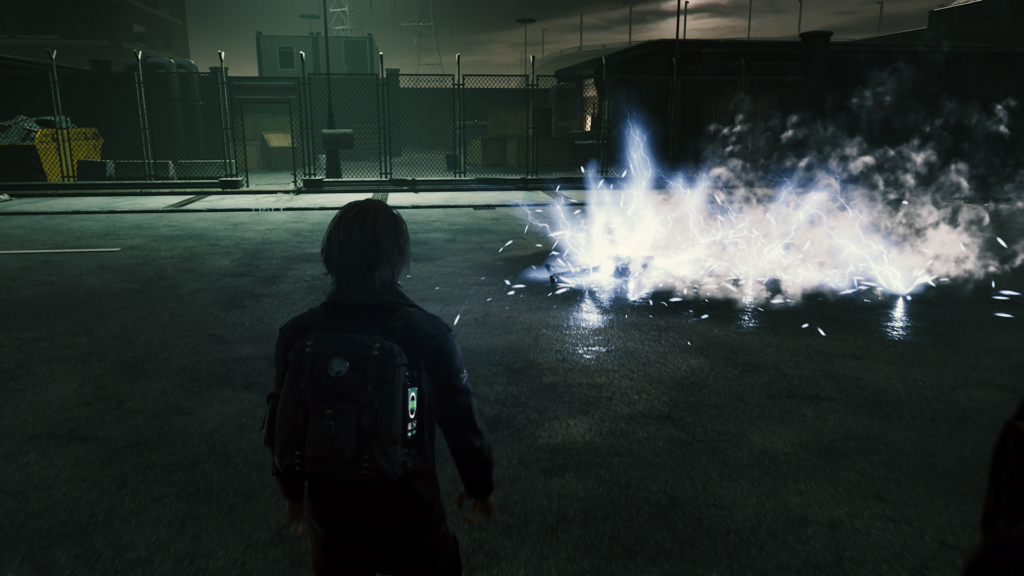 Stealth is an important element to Darker Skies as if an enemy isn’t eliminated quickly at a distance with throwables or the pistol, the only weapon in the game, they will relentlessly and mercilessly flail their arms around and kill the player. If these enemies get to close, death is all but certain which takes the player back to the start of the level or a sparsely used checkpoint.

Other enemies that wield melee weapons can be outran as they only walk in pursuit of the player and can be more easily avoided. A Focus ability highlights nearby enemies as red silhouettes and shows the path to the objective as a blue line. This is helpful due to the lack of guidance in every other department that Darker Skies affords. 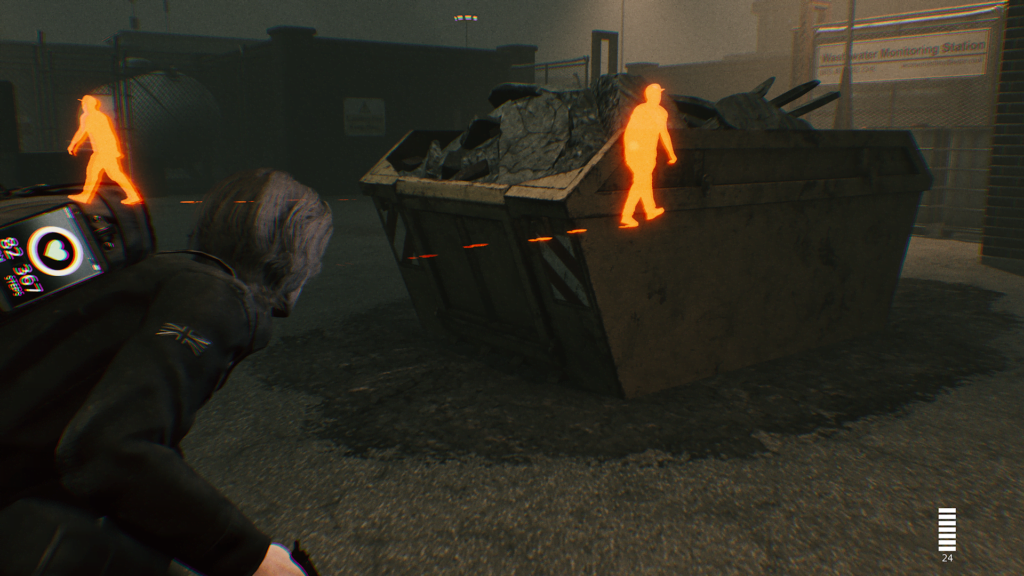 Ammo pickups are pretty generous but unfortunately they need to be. Four or five headshots aren’t guaranteed to get the kill on them easiest difficulty and on the harder difficulties an entire clip worth of headshots rarely put the enemies away. Even if crouched, hiding in the shadows, and not moving at all, the enemy is more often than not able to detect the player, even if hiding behind an objects such as a car or tree that should obstruct their vision. The enemy AI is less than forgiving and when considering the ridiculous amount of headshots it takes to kill an enemy with the gun, they are not fun to sneak past, they are not fun to engage, they are not fun period. 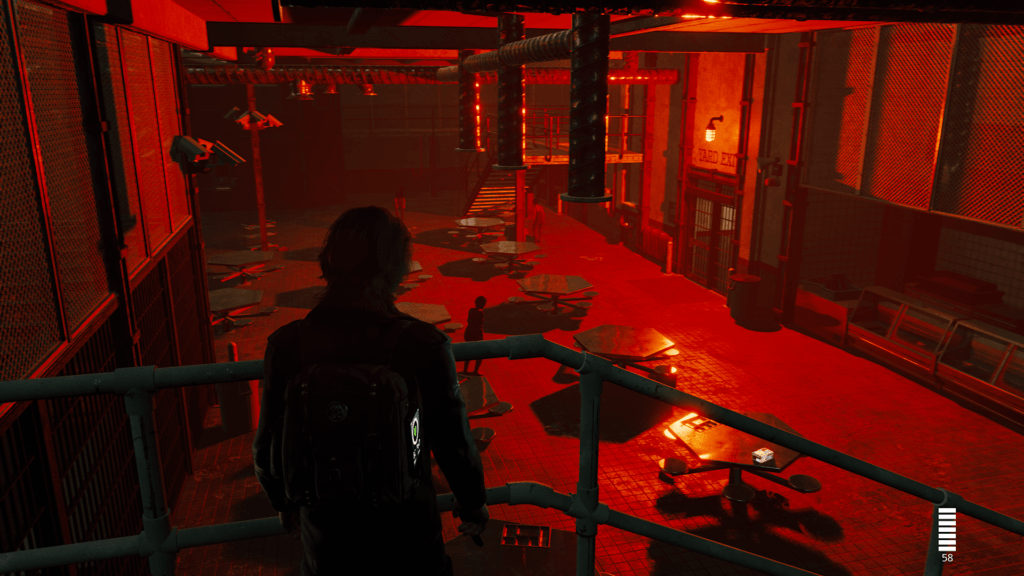 Also equipped with a flashlight that consumes batteries, which can be found in the environment, this too is poorly executed as a number of areas are so dark that without the flashlight, it’s impossible to navigate the area you may be stuck in. The Focus ability sometimes doesn’t show the waypoint which makes for some frustrating moments trying to find a way out of the darkness. As the brightness can’t be adjusted from the pause screen, this does no favours to an already technically challenged experience. 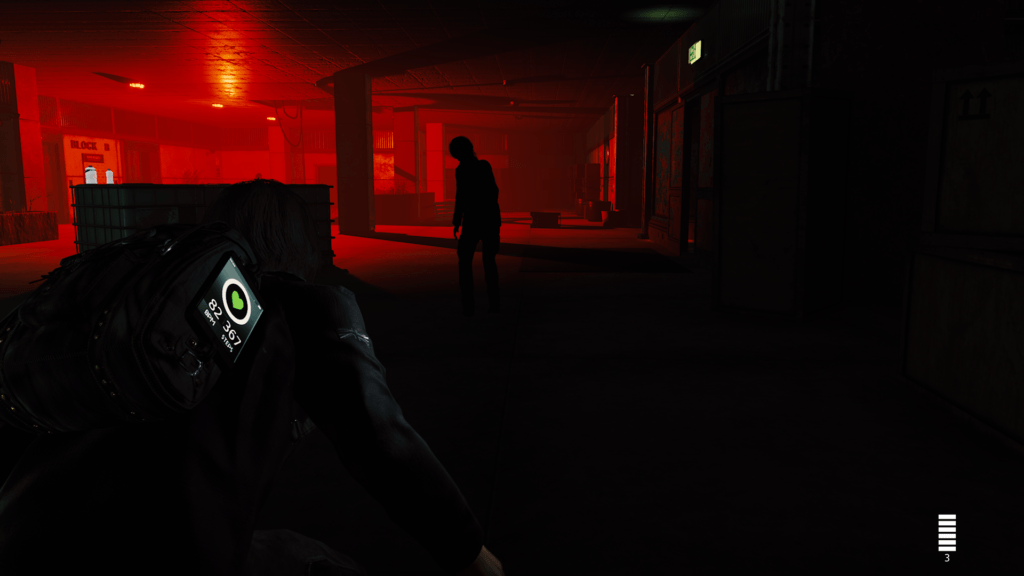 Aside from poor enemy AI, the technical issues continue with the frequent instances of walking too close to a wall or rail and being stuck inside it. The worst instance I experienced was in the tunnel hub, walking along a railing and somehow moving through it into the water, unable to climb out and forcing a checkpoint reload. Despite the fact the reload occurs in mere seconds, I should not have ever been trapped in an inaccessible area.

Interactions with objects in the environment often didn’t register and getting stuck trying to run through doors from enemies weren’t particularly enjoyable due to their frequency. The poor gunplay, in particular the slow and clunky aiming further degraded my experience. It plays and feels like a PS2 era game, similar to the older Resident Evil titles but without the fun. 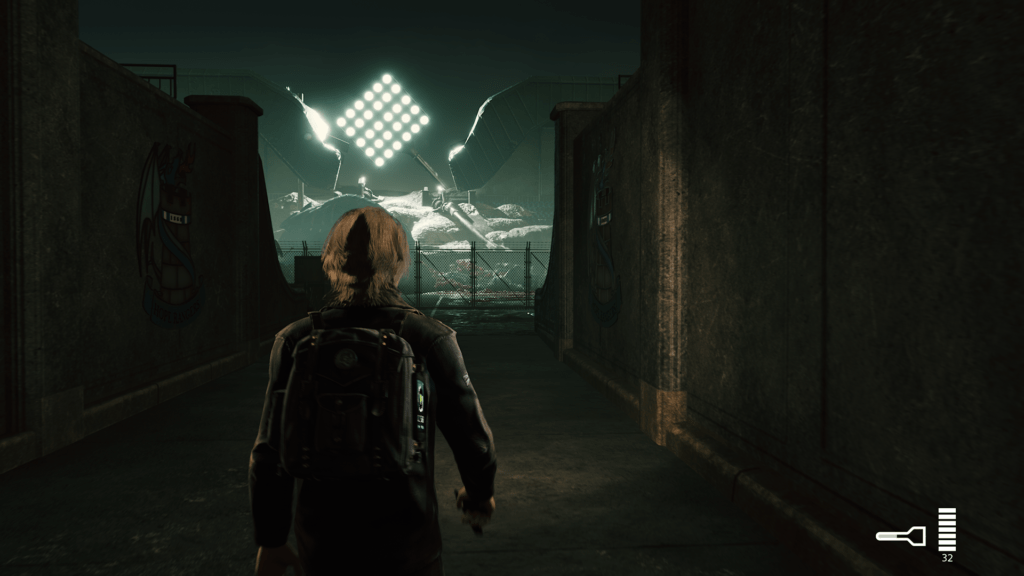 Surprisingly, Darker Skies nails the atmospheric tension with an ominous score and , for the most part, effective sound design. An ever-present sense of danger is a welcome layer of mental torment that elevates the rather linear and dated experience. 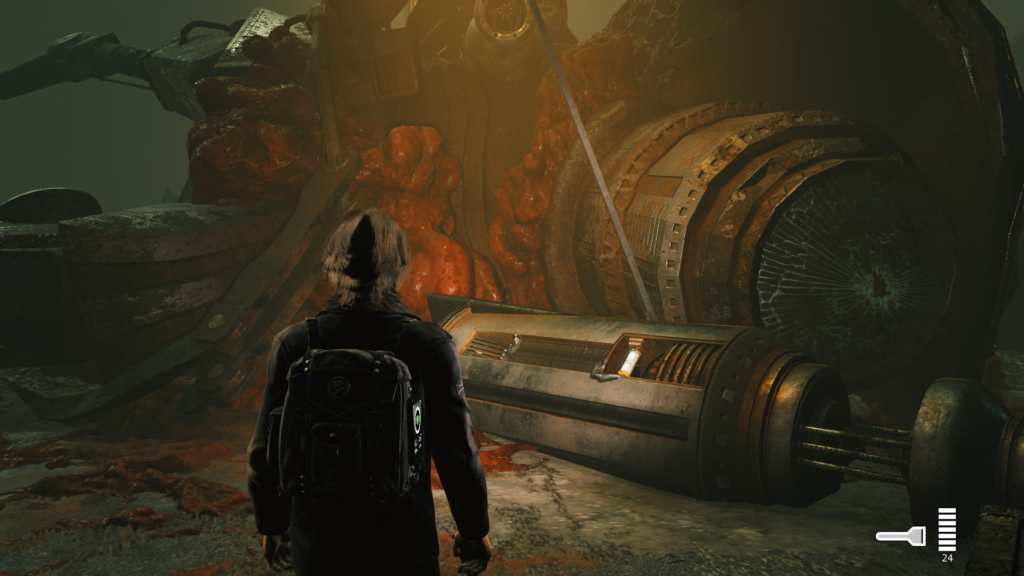 Darker Skies follows up the mediocre Grey Skies: A War of the Worlds Story with an adventure that is somehow worse in almost all aspects with the exception of visuals and tension. The world and premise are so interesting, and the iconic Tripod machines make an epic appearance that unfortunately can’t overcome the mediocrity of the hundred-or-so minutes that precede it. The concept is sound and the tone is effective, with some gameplay tweaks Darker Skies could easily be a decent game. In its current state however, it is not. 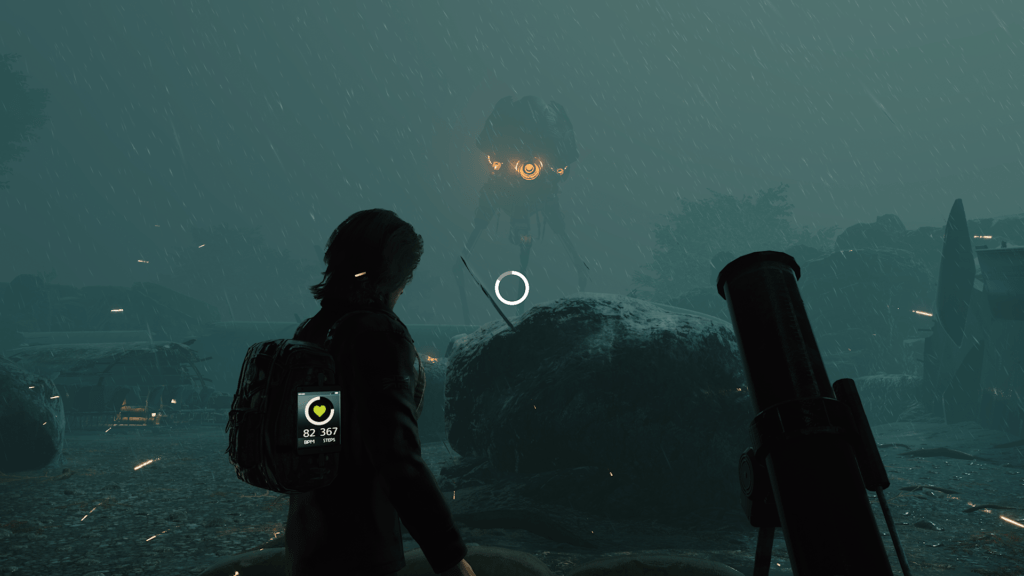 + Cool premise and War of the Worlds concept 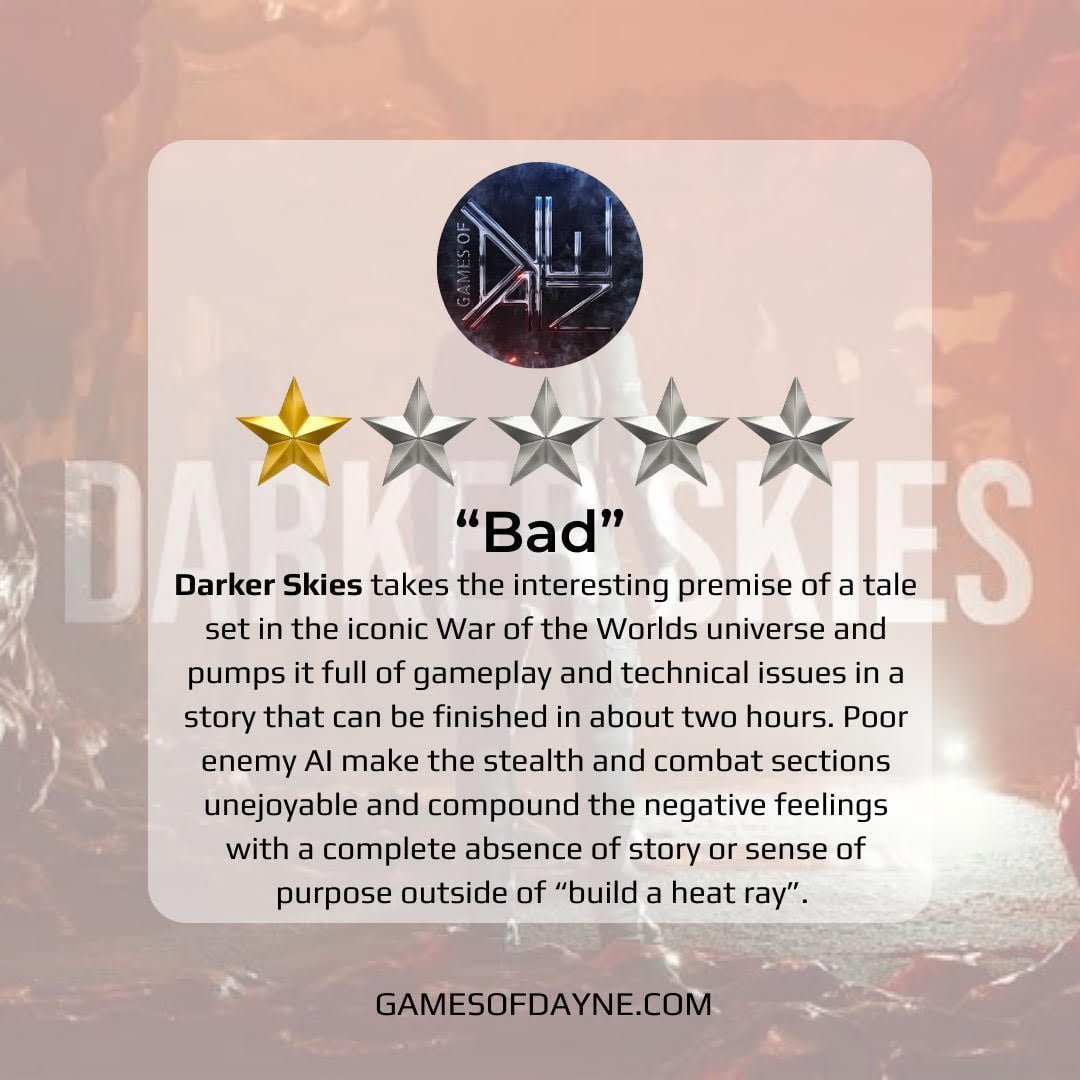