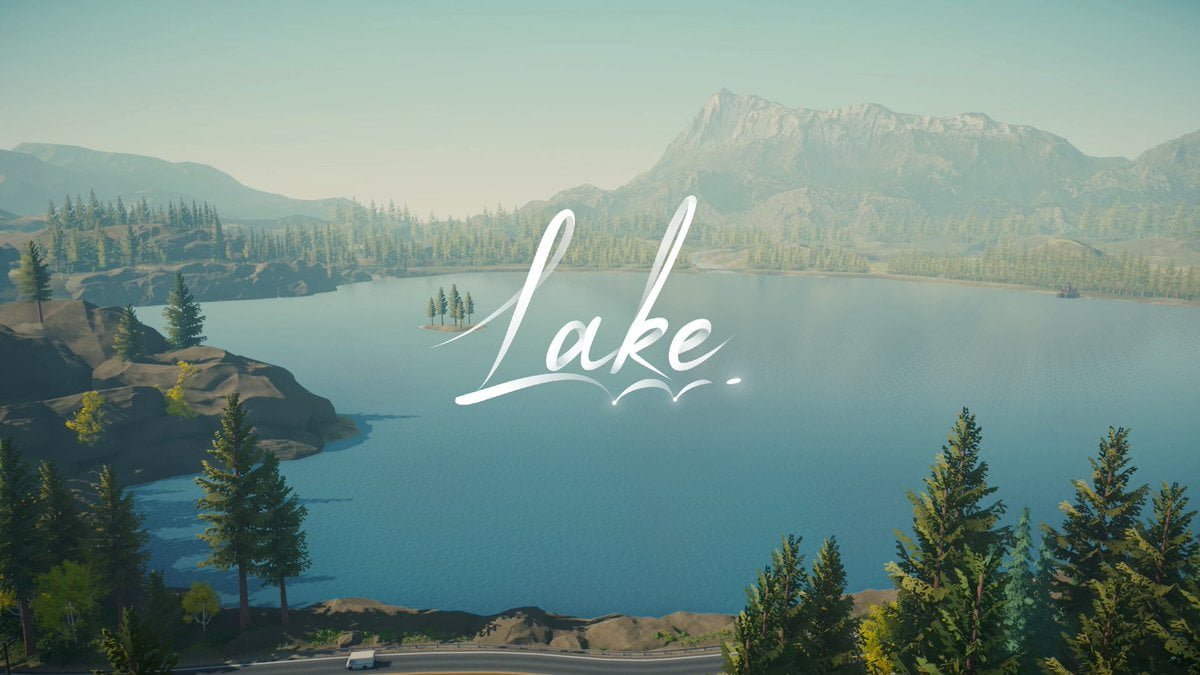 Providence Oaks is a beautiful, scenic, sleepy town that Meredith Weiss once called home in Lake. Returning to the town she grew up in for two weeks to fill in for her father, Meredith trades in her IT hat to don the blue attire of the Providence Oaks postal service. Delivering mail on her daily rounds introduces her to some of the quirky townsfolk and reacquaints her with faces from her past and those close to her parents.

Doing daily delivery rounds, completing optional side missions given from some of the mail recipients and taking in the sights of the charming Providence Oaks leads to a rather relaxing story set in 1986 that is full of charm and decisions to make. These decisions can affect Meredith’s friendships and relationships as well as determining which of the alternate endings will play out.

Stepping into the postal shoes of her father, Meredith’s days are laid out with multiple deliveries to make of both letters and parcels, some of which will lead into scenes with the recipients, giving the player control of Meredith’s responses and, in some cases, the decision of whether to accept the optional side missions they propose.

The main storyline simply requires Meredith to complete her daily deliveries Monday to Friday and spend her nights at home either reading or watching TV. As for the weekends, Meredith has often made plans to meet up with characters depending on the choices of the player that pass the time with deeper character moments and interactions. 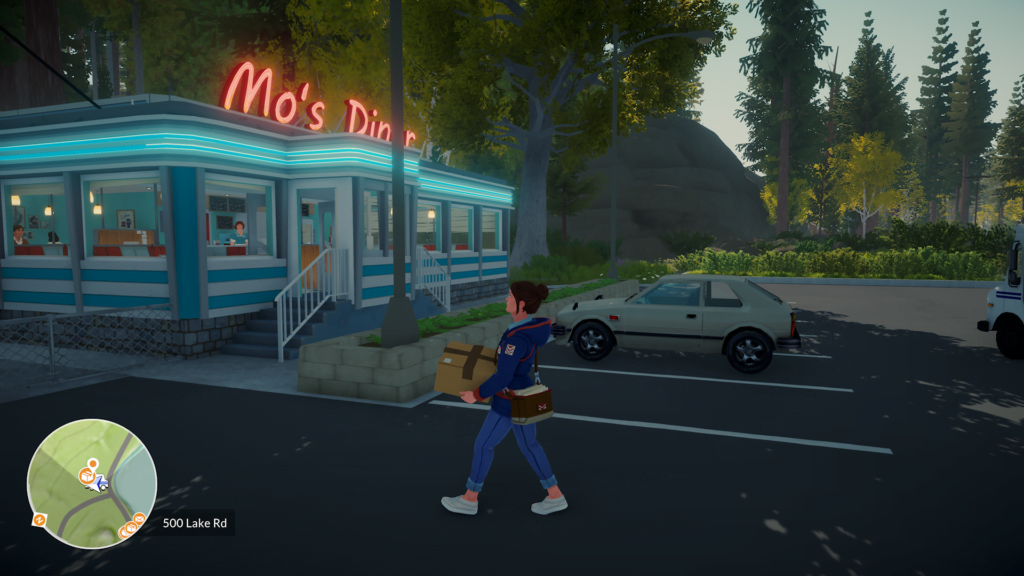 The gameplay tasks players with driving the mail van around Providence Oaks and delivering letters into the recipients’ mailbox or leaving parcels on their doorsteps. Some mail recipients answer the door and these lead to somewhat lengthy character interactions that typically serve as the introduction to a longer lasting arc that involves optional side missions or character moments for the player to accept or decline.

A diverse range of characters including a lumberjack, a fisherman, an elderly cat lady and teenage mechanic make for some entertaining story beats that are worth taking the time to explore. When delivering the mail, the player is able to drive around Providence Oaks and can utilise a map to see all of the locations of the deliveries. Once discovered, some locations can be fast traveled between while others can be selected with auto-pilot to have the game drive the player automatically to the destination.

Upon arriving at the destination, the player can simply approach the mailbox and interact with it to deliver a letter, or if it is a parcel that is to be delivered, the player must open the back of the van and select the appropriate parcel as per the address attached. The address the player is currently at can be seen at all times next to the mini-map on-screen, alleviating any possibility of selecting the wrong parcel to deliver. 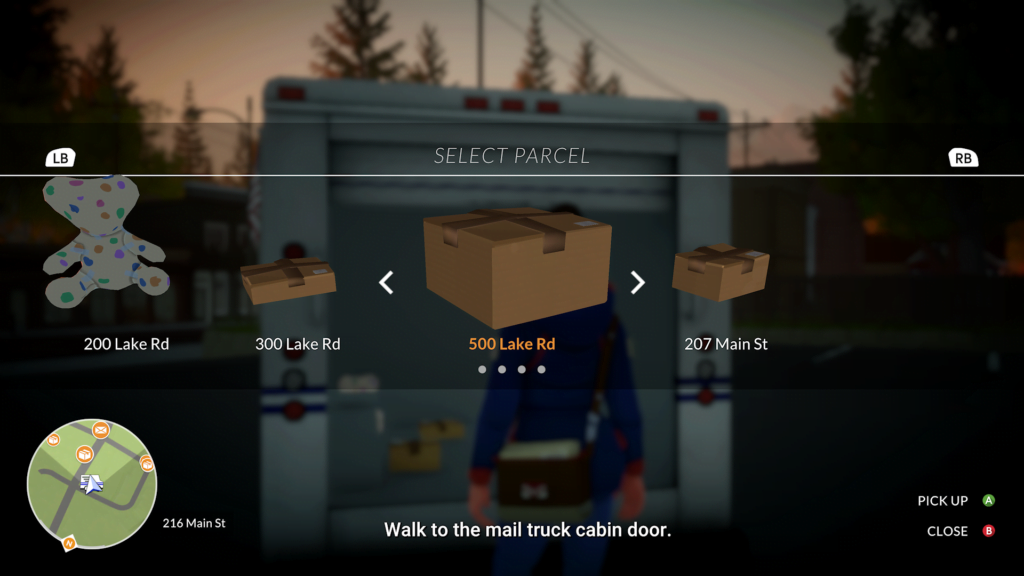 As a narrative adventure driven by the player’s decisions, Lake can be rather mellow and quiet if the player declines invitations to spend time with the locals she crosses path or it can be a little more adventurous and heartfelt should the decision be made to make some plans.

This freedom lets players take their experience with Lake into their own hands, allowing them to simply complete the main story in as little as 3 or 4 hours while offering a playthrough of closer to 5 or 6 for players that choose to take on all optional side missions and invitations to spend time with the characters Meredith meets along the way.

With three possible endings, Lake offers a little replayability though a strategically placed manual save allows the player to witness all three with a simple save reload. 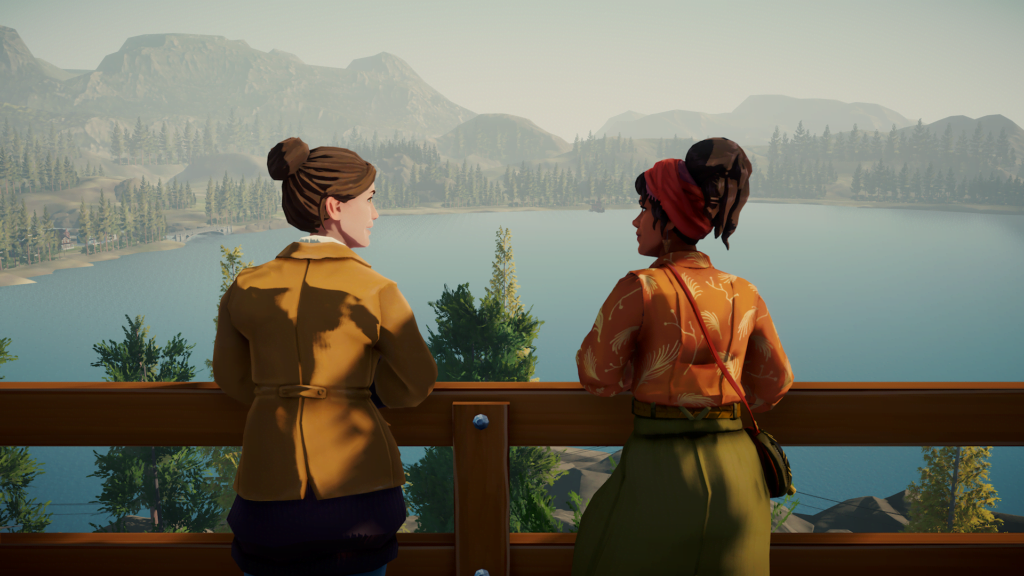 The folks of Providence Oaks all have varying dramas to draw Meredith into that allow their relationship to grow in certain directions with interaction. These are a nice addition to pad out the experience and add depth to the characters that would otherwise just be named NPCs. The variety of relationships Meredith is able to strike up include romantic possibilities that are fun to see play out and the implications of decisions play out just as memorably.

Despite being on a break from her regular IT duties in the city, Meredith is often called by her boss, Steve, filling her in on what she’s missing out on and occasionally asking for some work to be done which can be accepted or declined at the player’s discretion. This further adds to the short-term experience the player seeks to find within Lake but also has potential implications on a particular ending. Unfortunately, Lake is not without its technical issues. On countless occasions my attempts to interact with the van, parcels in the back of the van or characters, went unregistered, requiring several button presses to register. When using auto-pilot the van would often appear inside a building and become stuck or drive in an endless loop with the inability to exit auto-pilot as per the button prompt.

Reloading to an earlier checkpoint or sometimes quitting and restarting the game were required on occasion to allow me to progress. These issues aren’t game breaking but they do break the immersion of an otherwise endearing experience. 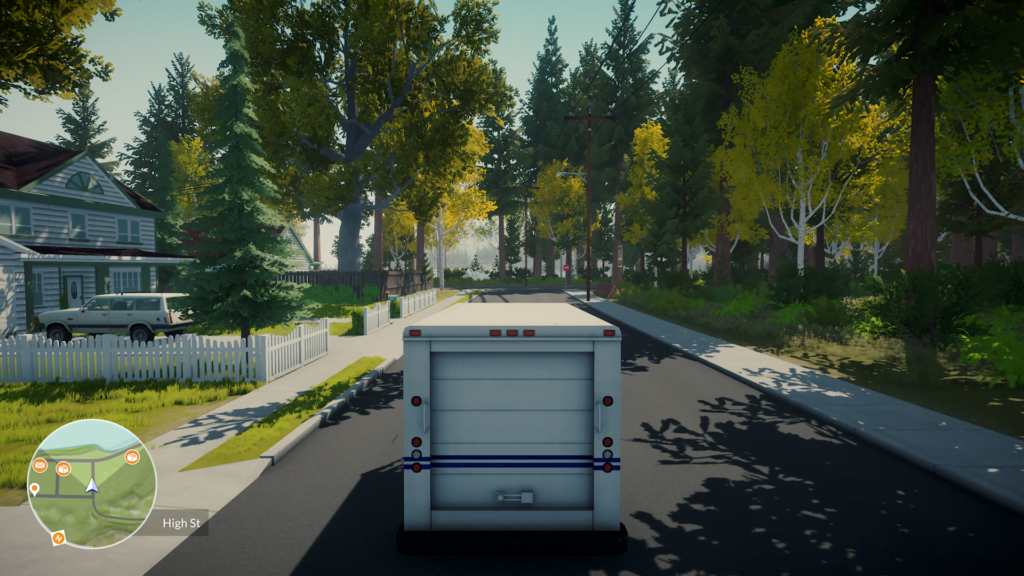 In addition to the cast of characters that enlighten Meredith’s brief stint in Providence Oaks, a stunning and beautifully realised art design adds layers to the experience, almost bringing the environment into the category of a character.

The charming country outskirts, sleepy suburban cul-de-sacs, and woods that surround the beautiful titular lake are brought to life at various times of the day, allowing for some striking storms and sunrises for example that help Providence Oaks feel alive. Accompanied by a beautiful score that adds to the serenity of the playfully charming environment, Lake hits all the right notes with its sound design. 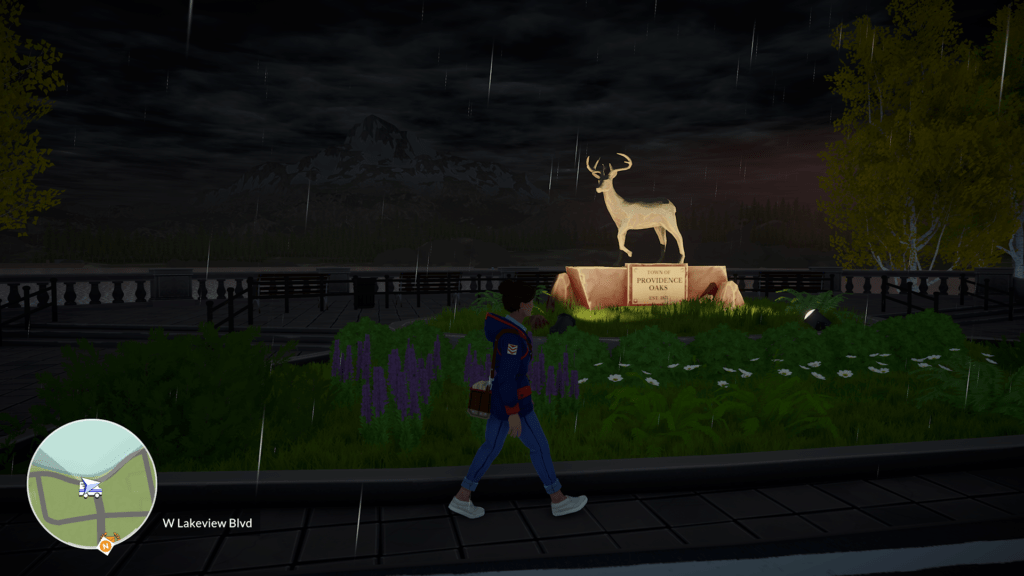 Lake is short, sweet and surprisingly relaxing, offering a scenic tour of the gorgeous Providence Oaks while affording the player the luxury of controlling Meredith’s free time, relationships and ultimate direction in life with the various choices to be made throughout the experience. There is a wholesome feel to the simplicity and charm of Lake and the stories it has to tell but the fact that these can be directly influenced by the player, and in multiple ways, the overall experience feels personal. 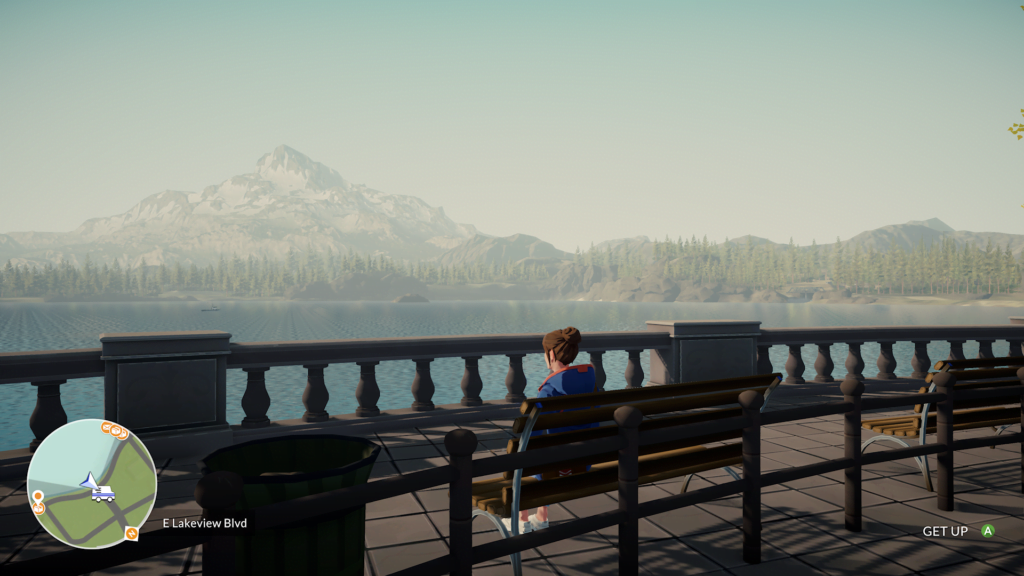