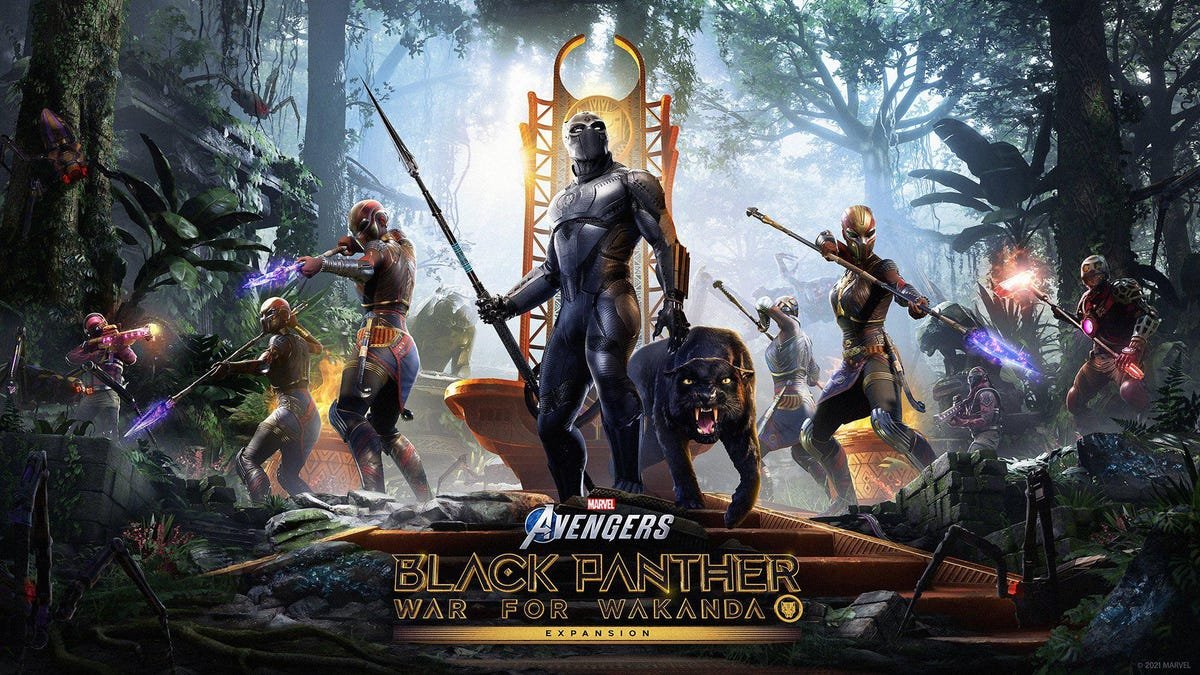 The long-awaited arrival of the Wakandan king and his kingdom have finally arrived in the War for Wakanda expansion in Marvel’s Avengers. Black Panther takes centre stage in the largest single content drop since the launch of Marvel’s Avengers last September (review HERE).

New enemy types, two new villains in the form of Ulysses Klaw and Crossbones, a stunning new biome set in the futuristic, hidden African city of Wakanda and Black Panther himself offer enough variety to reinvigorate the game and steer away from the repetition of the locations exhausted by players for nearly a year. Packed with dozens of outfits, unique gameplay, and his own skill tree to master, Black Panther goes a long way in ensuring the players embrace Wakanda… forever.

Black Panther is introduced in an exciting opening mission that sees Ulysses Klaw laying siege to the Wakandan capital with his own special forces, a varied and challenging new assortment of enemies that bring new offensive and defensive abilities that require a little more strategy than simply button mashing. 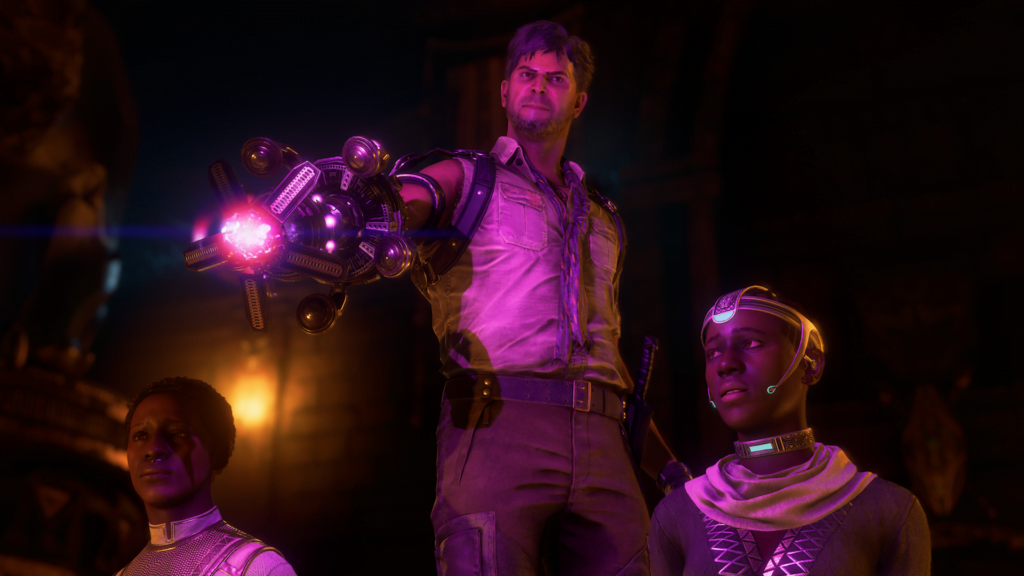 Klaw wants Wakanda’s vibranium, aware his black-market variant isn’t worth as much as the real deal, and has aligned with the emergent villain of the Marvel’s Avengers campaign, Monica Rappaccini, to bring war to Wakanda. Accompanied by Brock Rumlow, better known as Crossbones, the duo provides an exciting challenge for the Avengers including an epic boss battle against both of them at the end of the disappointingly short main mission chain of the expansion. 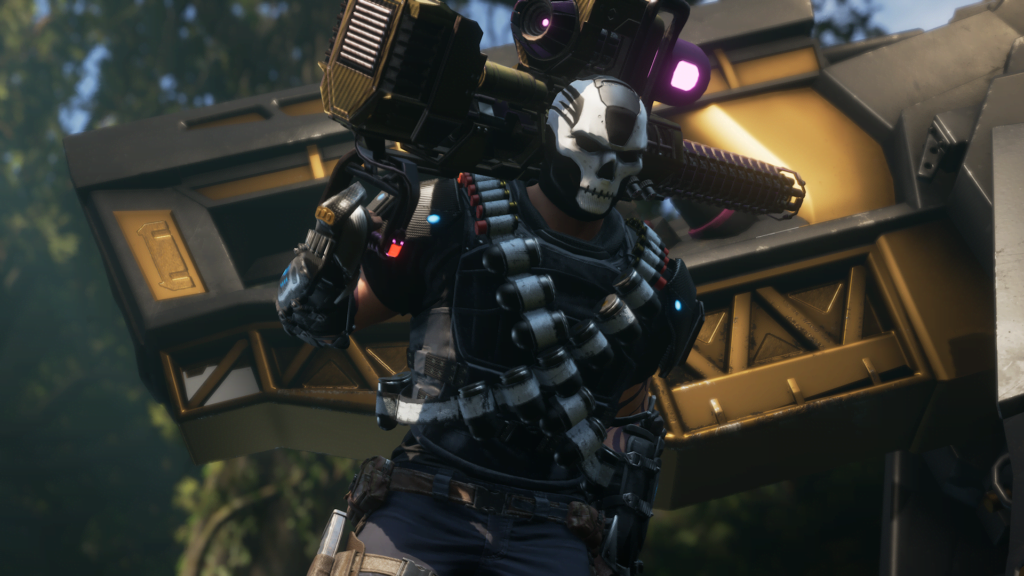 As with Kate Bishop’s Operation: Taking AIM (review HERE) and Hawkeye’s Operation: Future Imperfect (review HERE), Black Panther’s War for Wakanda main mission chain takes just a scratch over an hour and a half. The story it tells in that brief window is excellent however, showcasing the sibling relationship of Black Panther’s King T’Challa and Shuri, the loyalty of his commander Okoye and connection to his people he swears to protect. The relationships of T’Challa, including with his nemesis Klaw, are the backbone of the story and are wonderfully fleshed out considering the criminally short runtime. 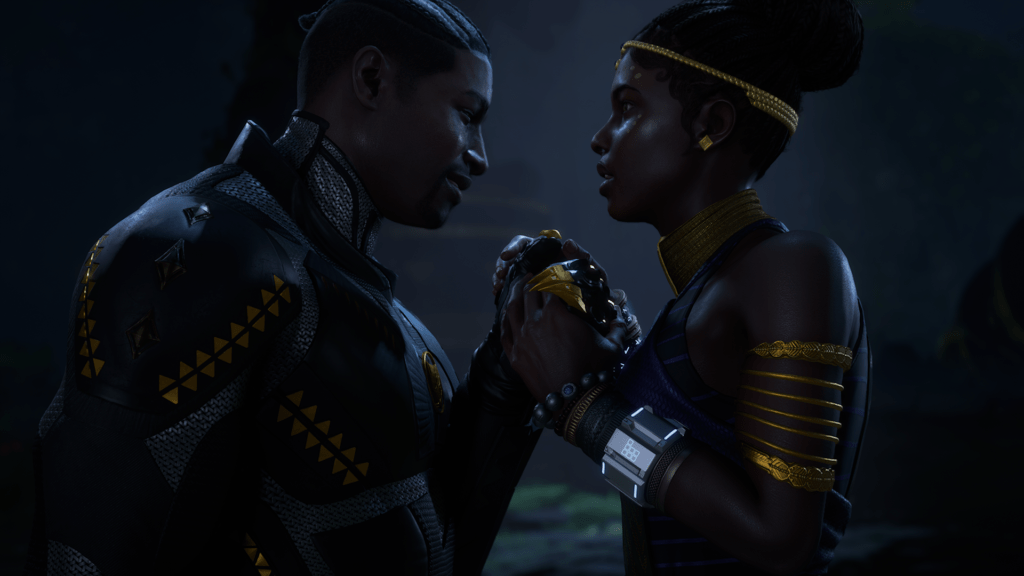 Luckily, the fun doesn’t stop with the main mission chain and the handful of missions that comprise it. Black Panther has his own iconic mission chain to complete which awards players an awesome regal attire for T’Challa and there are plenty of other war zone missions to tackle solo or with up to three other players in co-op. Thanks to a recent update to Marvel’s Avengers, gone are the days where a Strike Team of up to four players could only have one of a given character, now a whole team of Black Panthers can take the fight to Klaw so everyone can enjoy the exciting new gameplay of the Wakandan icon.

Black Panther feels incredibly unique, his swift and furious clawed melee combat is a blast to experiment with, combining his ranged dagger attacks and making the most of his vibranium infused heroic abilities to unleash punishment in an exciting fresh fashion. 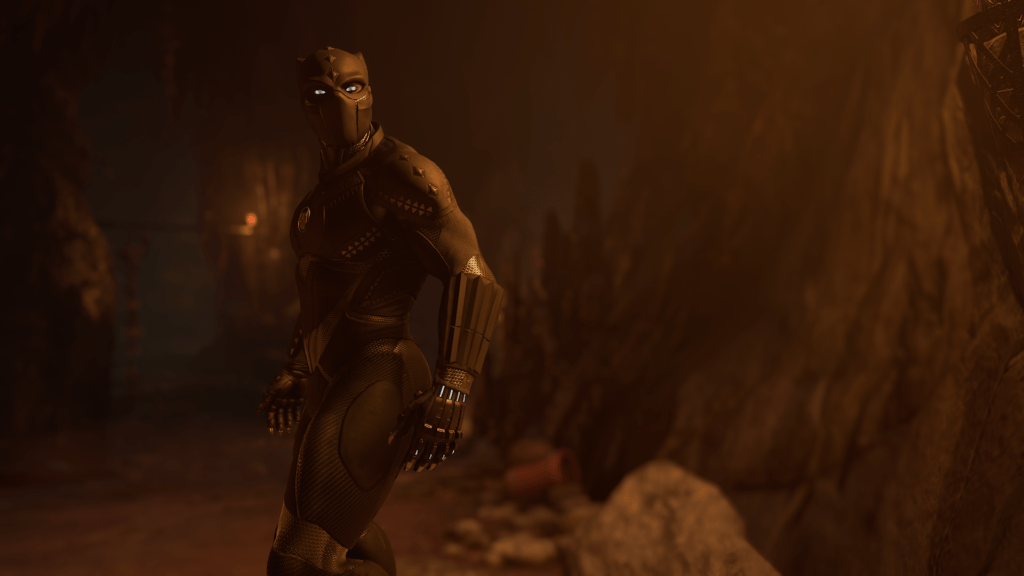 The heroic abilities can be upgraded to unlock some awesome variants such as the summoning of two Wakandan warrior spirits to the fight, accompanying the giant spirit Panther that lays waste to all foes in its forward trajectory while also providing an impressive buff to Panther himself for a limited duration. Very surprisingly, combat isn’t the only strong suit for Black Panther with his traversal game being just as exciting. Joining Captain America as the only other current hero that can double jump and wall run, Black Panther puts his own spin on these with his style and the scraping of the rock face by his vibranium claws as he crosses them.

Developer Crystal Dynamics have managed to flex their muscle in the ancient ruins department by creating some stunning caverns and platforming sequences that are reminiscent of their iconic work on the rebooted Tomb Raider trilogy. New and challenging environmental puzzles that would be suitable for Lara Croft herself have been introduced for T’Challa to master and the genuine head scratching a few of them are likely to cause are a much-needed breath of fresh air to those already in place in the base game. 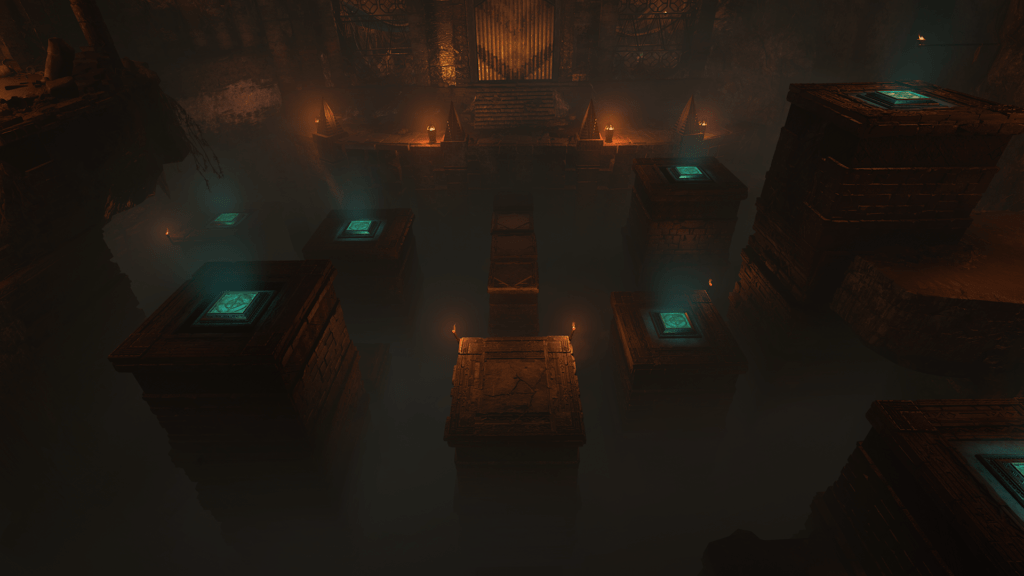 The entire biome of Wakanda feels so exciting and different, brought to life in such stunning detail that it genuinely feels like its own game. Loaded with ruins, new building types, a complete makeover for every interactive object such as loot chests, health canisters and containers that house resources all have a Wakandan flavour that feels authentic to the region they inhabit. 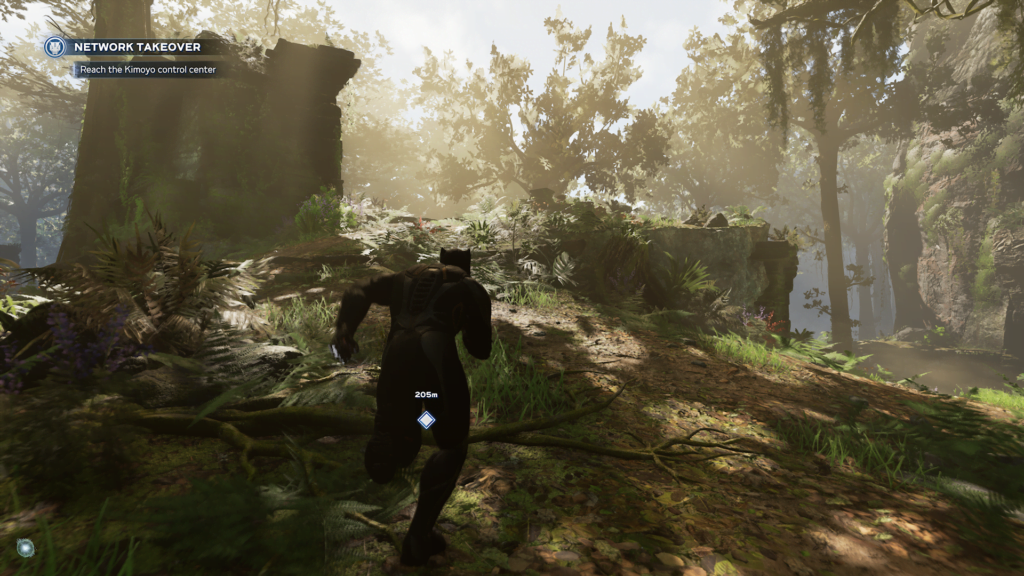 The new Wakandan outpost is no exception. By far the most visually impressive and meticulously detailed outpost to date, Wakanda’s is full of Black Panther’s army that salute him as he walks past, the most intelligent minds of the city working on the hyper-futuristic technology on display in every room and includes the ritual chambers of his spiritual elders. The detail is incredible, and the immersion is unlike anything else established in Marvel’s Avengers so far. Unfortunately for players bored of the base game’s primary antagonistic force, A.I.M.bots are back too, bringing the same android enemy variants players have defeated thousands of times. Their return undermines the unique haven and fresh concepts that Wakanda otherwise delivers spectacularly. One of the new enemy types introduced are small, medium, and large sized spider bots that unfortunately aren’t what players are looking for. 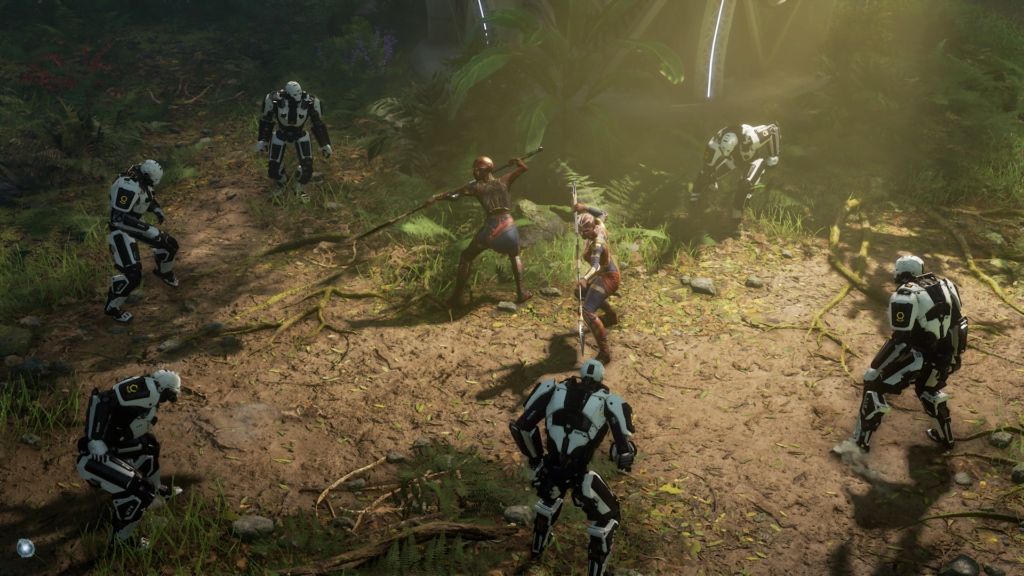 Androids and robotic enemy types have overwhelmed Marvel’s Avengers enemy offering since the beginning so it’s a genuine shame to see another variant added. To further drive home the point of “here is something new but also kind of the same” is a large mech that is pretty much the same as the large dreadbots from the main game. The method to defeating it is slightly different, but the similarities can’t be ignored. Attacking red points on the feet that reveal further weak points and when they do have been triggered a final device is exposed and ready to be destroyed to reduce the giant mech to scrap. 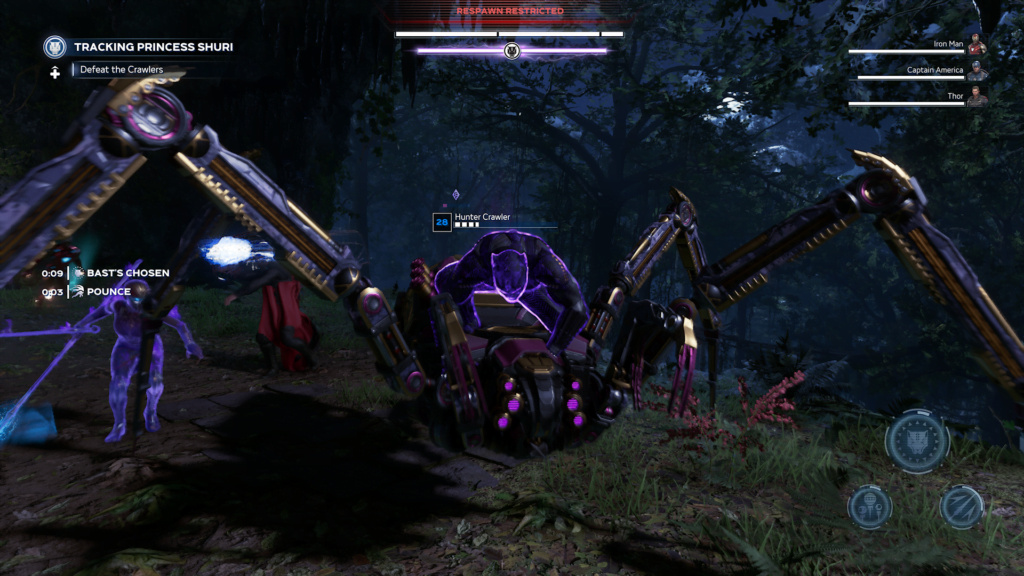 It’s such a shame to see slightly different versions of the key repetitive enemies we already have. The inclusion of A.I.M.bots, the introduction of the spider droids and the slightly-different-but-still-too-similar-to-dreadbots F.U.S.E. mech enemies are the weakest link in War for Wakanda. Unsurprisingly, everything else works so well because it’s new and fresh. 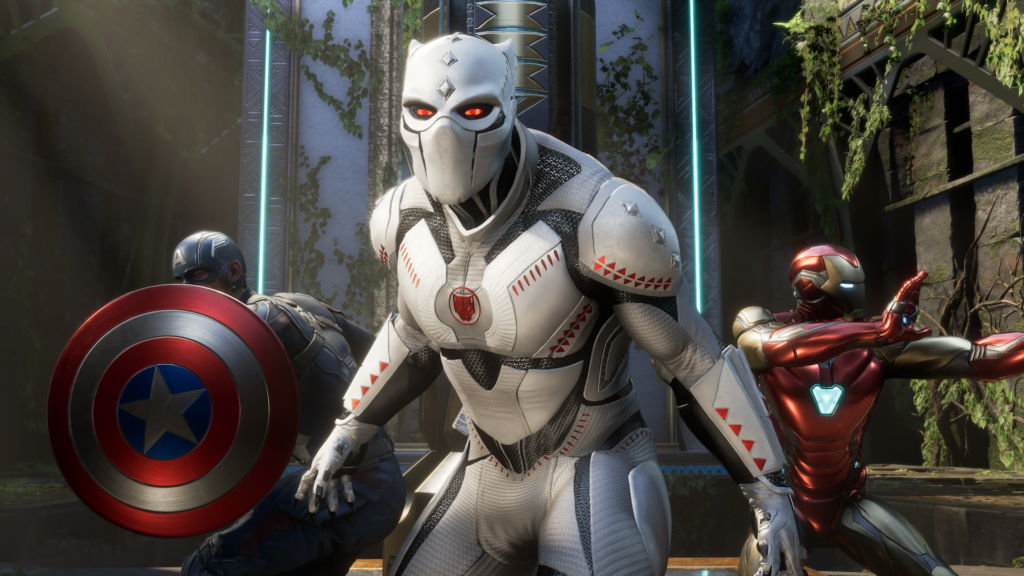 Wakanda is so beautiful to take in, by far offering the most striking landscapes to explore and the stunning attention to detail in the caverns and ruins adorned with Panther statues and symbolic imagery of the Wakandan’s is simply breathtaking. The tribal score and bits infusion of upbeat and energetic modern music are epic and add layers of tension to each enemy and boss encounter. 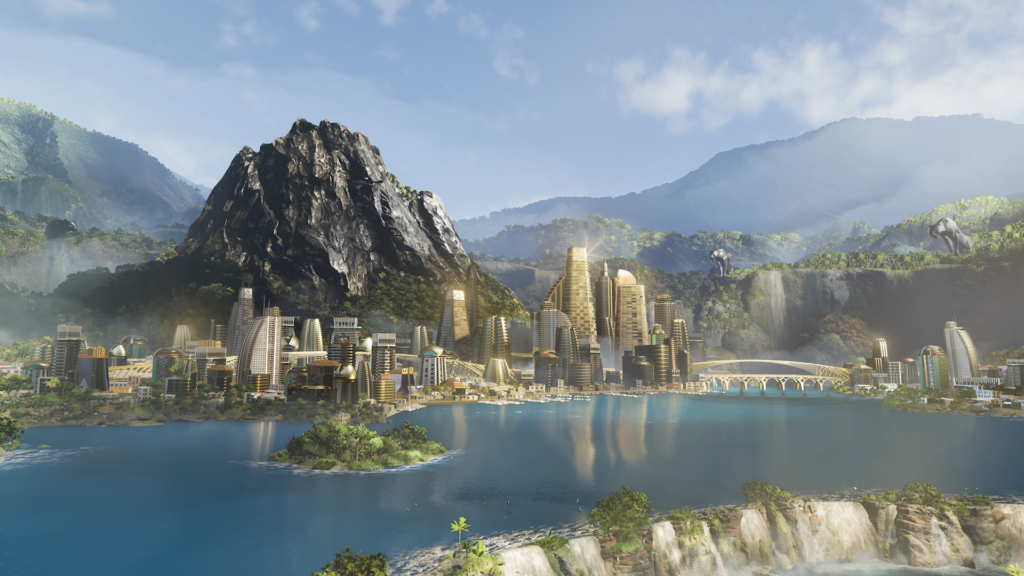 War for Wakanda is exactly what Marvel’s Avengers needed. Bringing the most exciting and enjoyable new hero into the fold with Black Panther, introducing a visual marvel of an outpost an incredibly fresh new biome, this is what players have been asking for. New characters, new locations, and new ideas and with the exception of the tiring A.I.M. inclusion, War for Wakanda hits the spot. 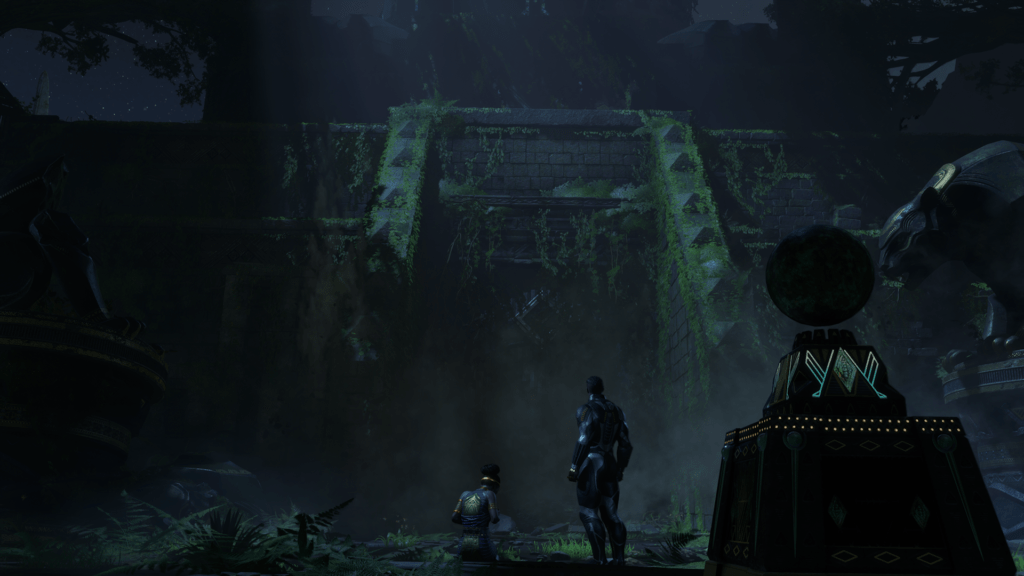 + Wakanda as a biome * The War for Wakanda expansion, and ALL additional heroes are available at no additional cost on all platforms *