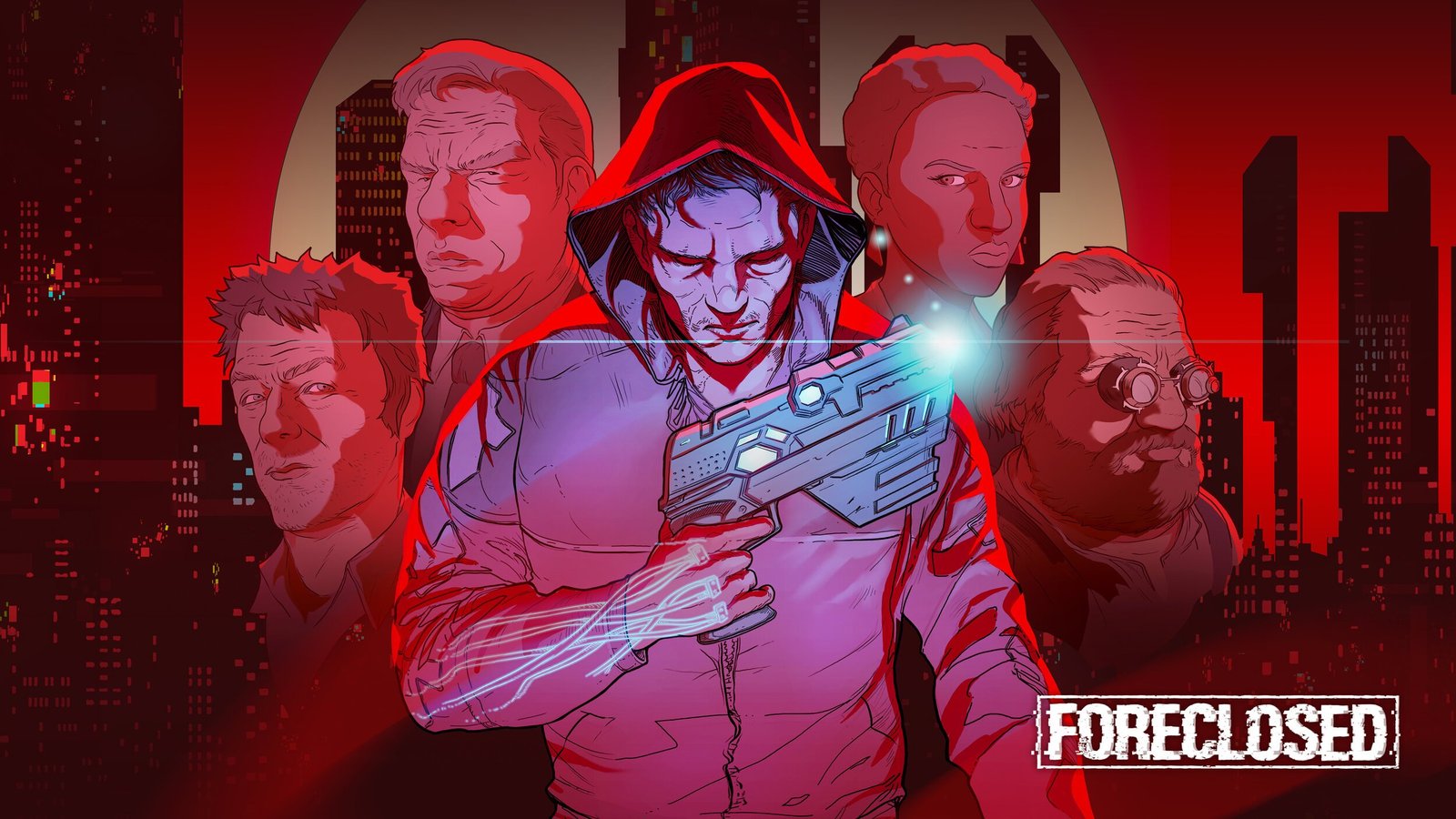 Augmented with implants at birth, the inhabitants of the cyberpunk world that serves as the setting of Foreclosed are essentially corporate property. Playing as Evan Kapnos, the company that owns his identity has been foreclosed, and in just a few short hours his identity will belong to the state.

The blend of third person shooting and stealth with hack-based puzzles mashed with a comic book art design will take the player on a two-to-three-hour thrill ride as Kapnos fights to save himself.

The story is surprisingly interesting, layered with tension and revelations befitting of a thriller film. Corporate espionage, shady deals and manipulation keep the pacing tense and constantly evolve the narrative in a new direction. By taking place in a cyberpunk setting Foreclosed can capitalise on sci-fi concepts such as augmentation, telekinetic abilities and shield generation that create some dynamic gameplay experiences in the combat encounters as well as general progression and exploration. 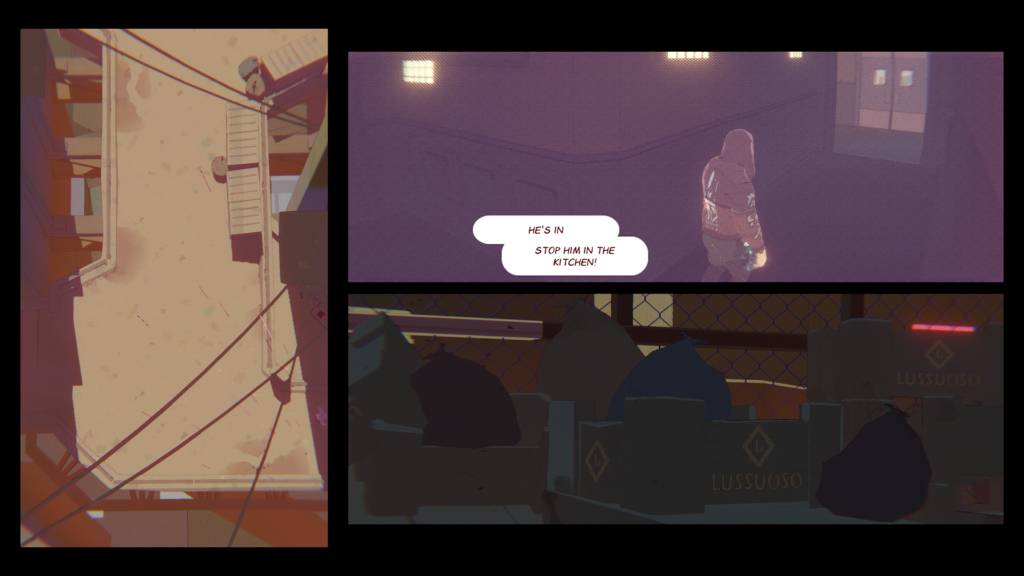 Crouching to avoid enemy detection allows the player to sneak within close proximity of enemy, of which they can see as red silhouettes through walls and perform stealth takedowns by overloading their implants.

If stealth isn’t the preferred playstyle, then going in loud, guns blazing is an option but tacky aim mechanics make this more complicated than it needs to be and the bullet sponge enemies can take a ridiculous amount of shots before dying, even headshots aren’t guaranteed to get the kill in a single shot. Unlimited ammo and no need to reload compensate for the technical issues however and allow the shootouts to continue unhindered. 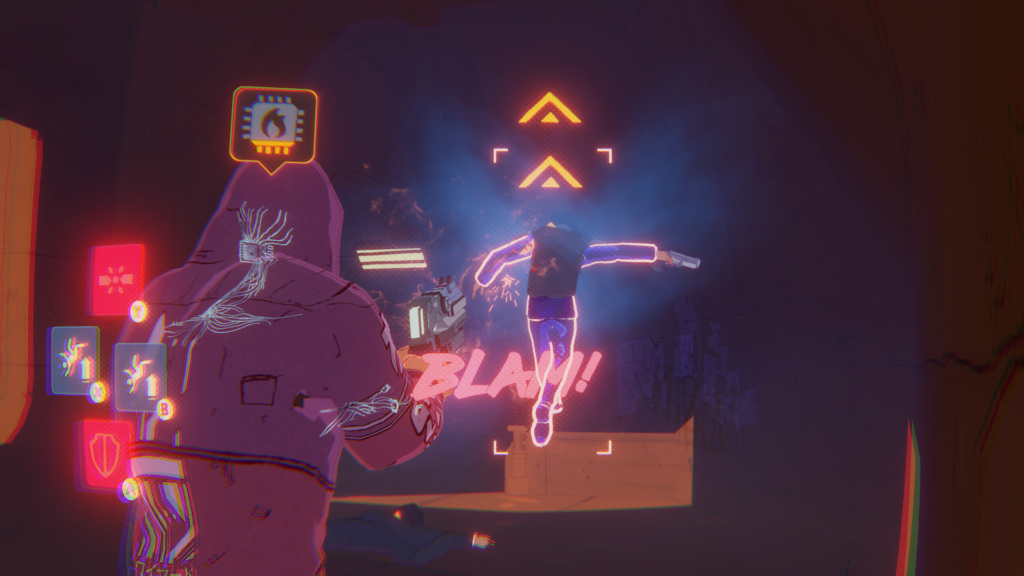 With story progression the player can unlock telekinetic abilities to lift enemies and suspend them in the air, slam them into the ground or to pick up objects in the environment and launch them at their targets. The combination of shooting, telekinetic abilities and stealth keep options open for the player in the combat situations and the freedom to alternate between offensive styles keeps the combat interesting throughout the largely wave based affairs. 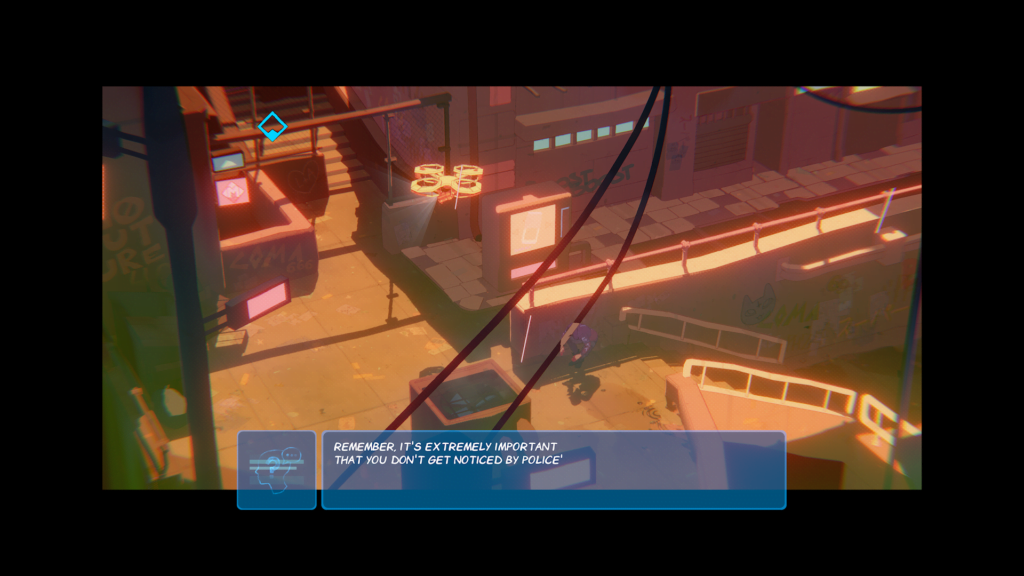 The player can explore the environments in search of devices that award XP by filling a wifi-like signal to track them down and interact with them. As the player levels up by earning XP from killing enemies, hacking things, and finding these pick-ups, XP turns into upgrade points which can be used to unlock new abilities, shield generation, methods to overload enemy implants and an assortment of weapon upgrades such as bullets that can pierce armour or turn the semi-auto pistol into a submachine gun. Using any ability takes a toll on the player’s implant and if it overloads the player will be temporarily stunned by the body rattling headache that accompanies it. These moments leave the player vulnerable so care must be taken when using any augment abilities to not overdo it. 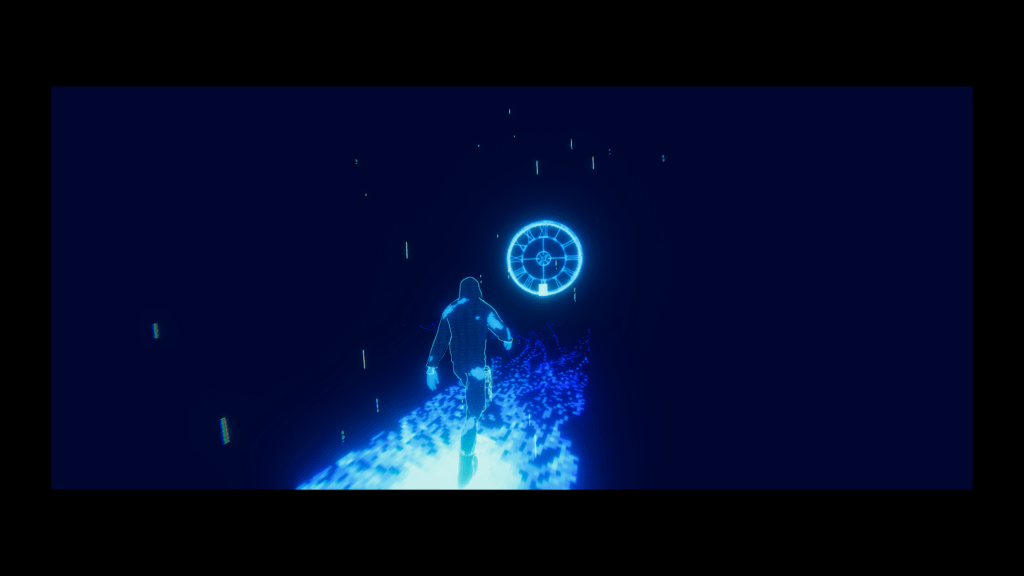 Light puzzle solving is required at intervals that tasks the player with activating consoles, controlling container cranes to create bridges, and hacking panels to open doors for example, simple yet a welcome addition to the otherwise room-clearing shootout affair.

By adopting a comic art design developer Antab Studio have opened the floodgates to have fun with panel-like cinematics and layered gameplay windows that feel genuinely look and feel like a playable comic at times. This does however lead to some frustrating directional issues when it isn’t always clear where the player is when there are multiple panels to look at or when the free control of the camera is restricted, and the player can only walk forward or sideways. Some transitions from cinematics to gameplay and vice versa aren’t always clear which also creates some control frustration. 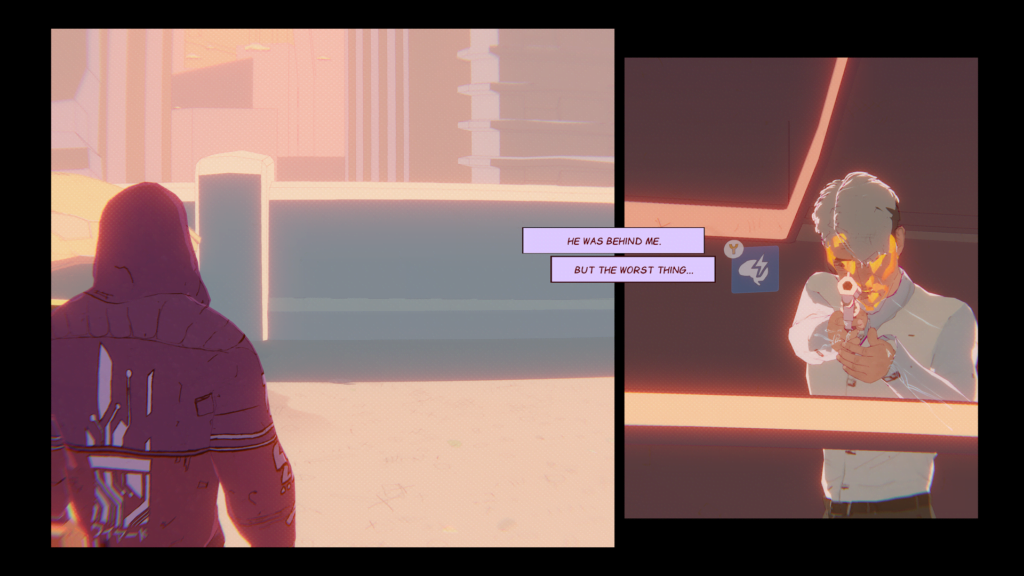 An ominous, tense and thrilling score keep the atmosphere urgent and unexpected, rounding out the overall thriller film vibes established by the stunning cinematic structure. Foreclosed oozes suspense in its presentation in a way that often overshadowed the gameplay. 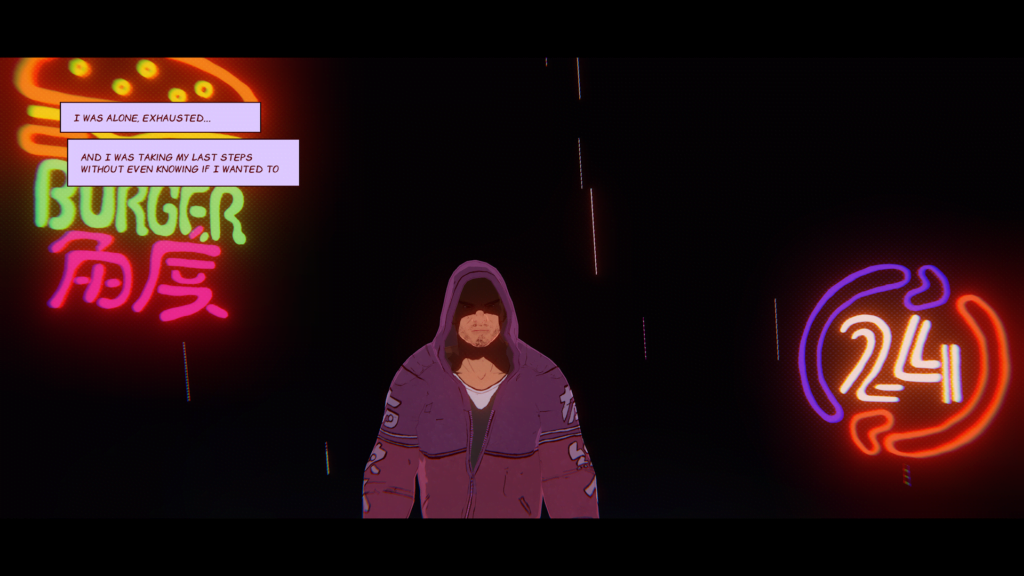 Foreclosed is a surprisingly solid experience that is layered visually, thematically and within the confines of its simplistic but varied gameplay. The cool comic presentation is fun, and the thrilling atmosphere and score keeps things tense as the web of lies and manipulation-laden narrative unfolds for Kapnos as he fights to save his identity. 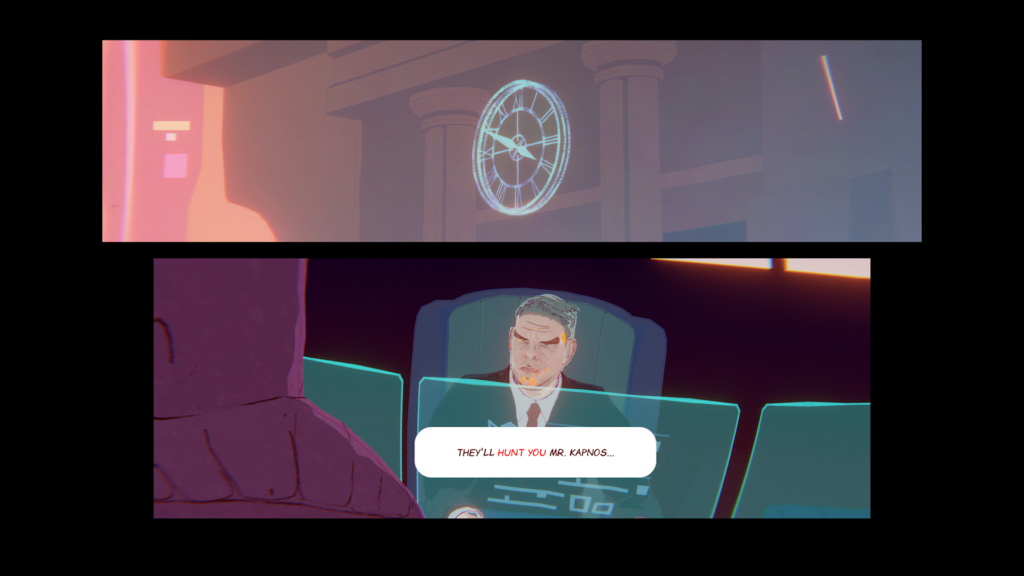