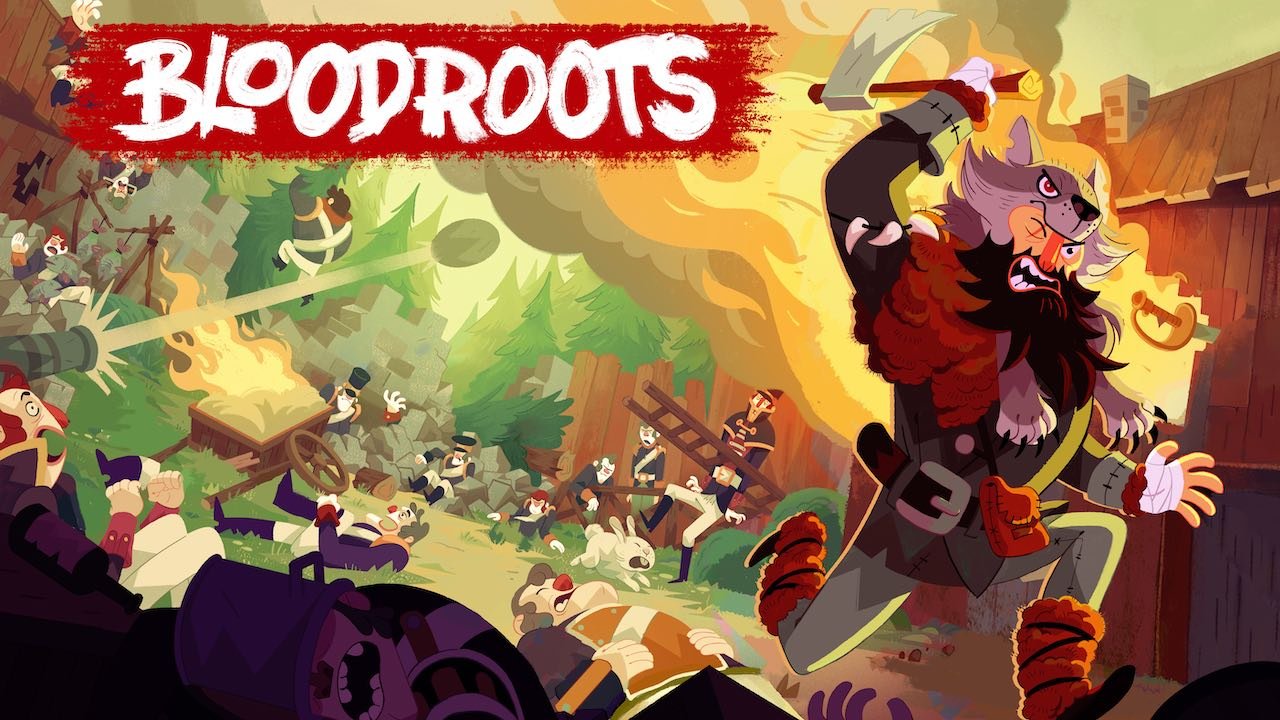 — Reviewed on Xbox Series X by Games of DAYNE —

Developed and published by Paper Cult the cartoonishly violent Bloodroots is a wild beat ’em up ride that follows the player, as Mr. Wolf, embarking on a murderous rampage with an interesting drip-fed story that does its best to ‘justify’ it.

Death is simply one hit away, for the player and their enemies, and with a wide array of weapons and seemingly harmless objects like vegetables to be used as life-ending tools of insta-destruction, the rampage is a blast. Full of platforming elements and area clearance objectives, Bloodroots is pretty bloody good.

Three acts comprised of five missions and a boss battle are the format of Bloodroots‘ story, showing Mr. Wolf’s pursuit of the three bosses he seeks to destroy. A revenge story is the perfect set-up to justify the wild and wacky arsenal of weapons at the players disposal. Swords, axes, tables, carrots, fireworks and chain guns are just a very, very small example of the arsenal that can be used to take down every enemy in a single strike. Experimentation with these is a lot of fun and encourages the sampling of every single new object encountered. To make things even more fun, as each level is broken into areas that need cleared before being able to progress, the final kill in an area results in a cinematic execution that is only as ridiculous as the weapon in hand. These are amusing, violent and over the top, really selling the tone of Bloodroots that Paper Cult have wonderfully established. Each act takes place in a unique location and each mission inside the act is set in it’s own little section, preventing a sense of familiarity or repetition in the environment from setting in. The environments are beautiful designed, gorgeous landscapes to be painted over with the blood of the enemies. Every enemy defeated leaves a splashing trail of blood that makes for some lusciously red terrain. The playful art design may have a childish and cartoonish charm but the trail of destruction left behind by the player is certainly not an experience to be viewed by children. Missions are scored based on the likes of number of enemies killed, the time taken to complete it, number of deaths and whether a secret wolf hidden in each mission has been discovered or not. Completing certain missions with scores also awards a unique hat that can be equipped, essentially a skin, that provides perks or abilities. In between each mission the player is returned to a campsite which acts as the hub world. Here they are able to switch their current hat, talk to the ghosts at the campfire, select missions to replay or continue the adventure. Let’s talk about them ghosts. As the player exacts revenge on each boss they return to the campfire area and can be talked to. It’s a fun concept that works well in the grander scheme of the story. 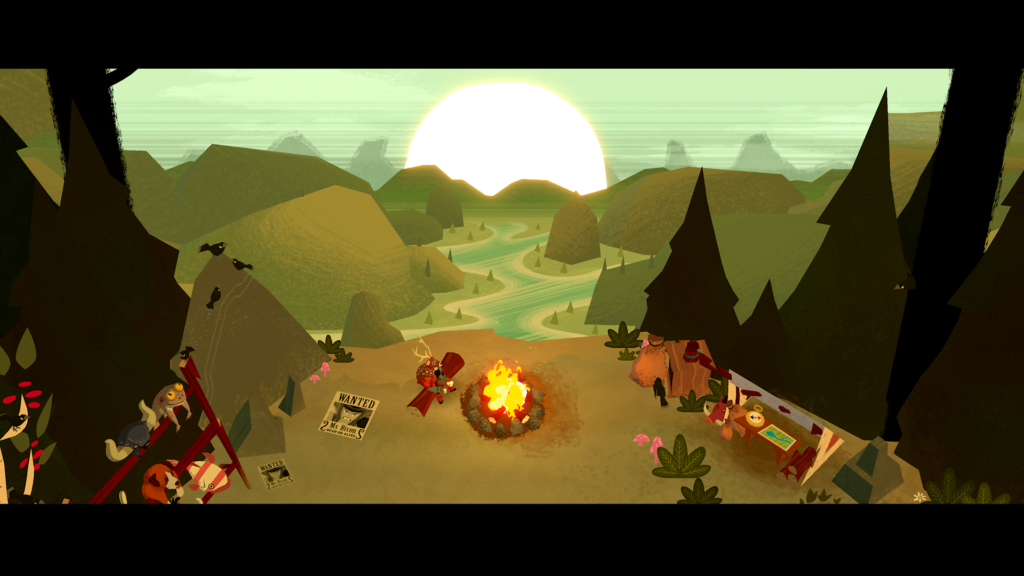 The levels are cleverly designed and full of environmental hazards such as fire, spikes, moving objects and of course dozens of enemies that want to insta-kill the player. Some levels favour verticality and have cannons or jumping pads to reach higher plateaus, adding a welcome variety to the visual design and typical traversal which consists of jumping or using certain weapons such as swords to dash across wide gaps. The boss battles are fun and epic, throwing various smaller enemies at the player to keep things chaotic. It is important to mention that if the player is struggling to survive with the one-hit kill situation they can toggle an Invincible Mode to allow the game to be enjoyed for the story and experience without the difficulty. Additionally, the player can also toggle an area clear, both that and the Invincible Mode can be found in Options, to instantly clear the area of all enemies and allow progression. While some will view this as cheating, I think it is smart to accept these features as accessibility tools for casual players that want to experience Bloodroots without the pressures of perfect runs. Bloodroots is suspiciously enjoyable with its ridiculous arsenal of ‘weapons’, cool execution animations, beautiful art design and fun platforming. The ability to revisit previously completed missions and unlock all of the hats and their associated perks adds some replayability. Playing the story legitimately took just over three hours but with the accessibility-friendly Invincible Mode it can be completed in a little over an hour. As this title is a part of Xbox Game Pass I highly recommend checking it out. It’s a bloody treat. – Ending is a little predictable