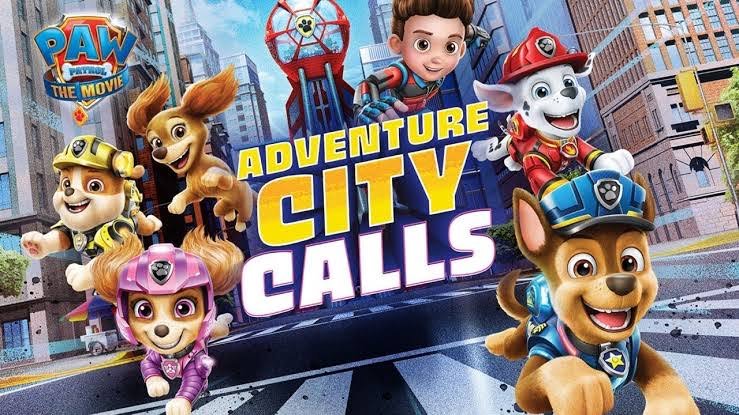 To coincide with the cinematic release of PAW Patrol the Movie, a tie-in title has been developed by Drakhar Studio and published by licenced title powerhouse Outright Games. PAW Patrol the Movie: Adventure City Calls features locations from the big screen adventure as Ryder and the PAW Patrol team discover that Mayor Humdinger is up to no good and only their mighty efforts can save the day.

The 3D platforming adventure plays like a combination of a side-scroller and light platformer, offering an assortment of mini-games that utilise the unique abilities of each of the eight playable pups of the PAW Patrol. Two pre-determined pups take the stage of each of the eight missions and can be switched between at will if playing solo or controlled by a player each in local couch co-op. Each of the eight missions have been carefully designed to be accessible to younger players. Aside from movement the only other control for most of the gameplay is the ability to jump. At a handful of sections in each mission there is a PAW Interaction which requires a specific pup to activate and use their unique ability to play a very brief mini game. For instance, Rubble can drill through rocks or swing a wrecking ball, Marshall can put out fires with his fire truck and Chase can use a grappling hook or zip line to reach new areas.

These are very simple sequences that have a brief tutorial before every instance to remind younger players how to complete them. Some missions have driving, flying, or swimming sequences which offer fun variety and keep the simplistic experience diverse enough to remain engaging and capture the interest of young players. Hundreds of pup treats litter the screen of each mission, as well as three badges to collect, to give players something to focus on as they push forward. Collecting these awards character cards and other things that can be checked out in the Extras section of the main menu, further providing a fun distraction for fans of the PAW Patrol gang.

Completing all eight story missions can take as little as two hours, approximately 10-15 minutes each if attempting to collect all of the treats and badges. As that is from the perspective of a 30-year-old father somewhat experienced in video games, it is easy to understand that each mission could take twice as long for the youngest of PAWsome players. Considering the wealth of mini games available outside of the main story, an experienced player can have everything completed in around four hours but again, young players have countless hours of replayable fun ahead of them.

There are four types of mini games to enjoy; 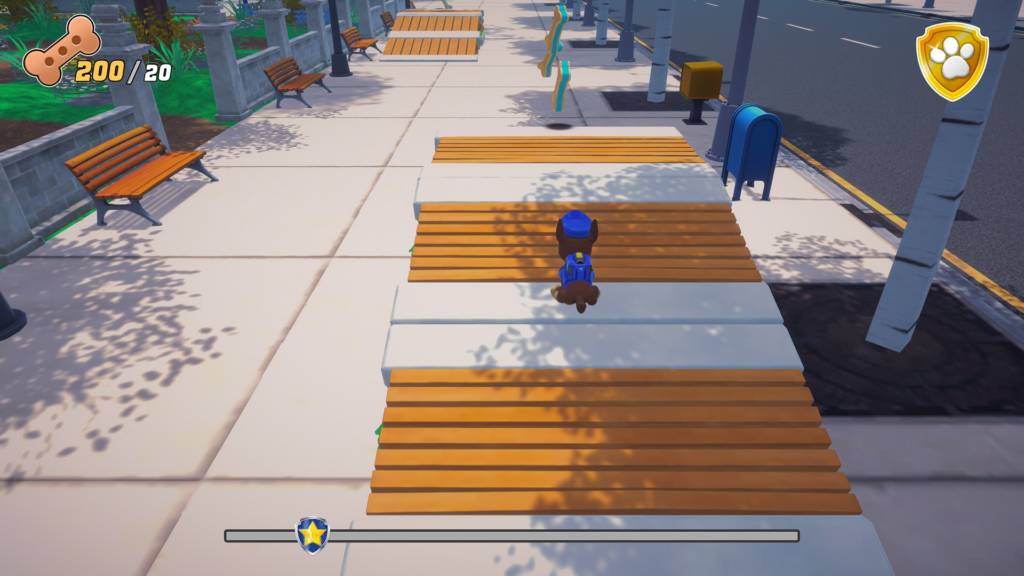 There are some fun and thoughtful, yet subtle inclusions that make the experience even more suitable for a younger audience. Considerations such as pups only being able to cross a road at marked pedestrian crossings and any cars coming from either side stopping for them to do so is a great way to remind young players of road safety while enjoying a video game. This may seem like a no-brainer to older players as they play through but there is no such thing as bringing too much attention to the importance of these observations to children. 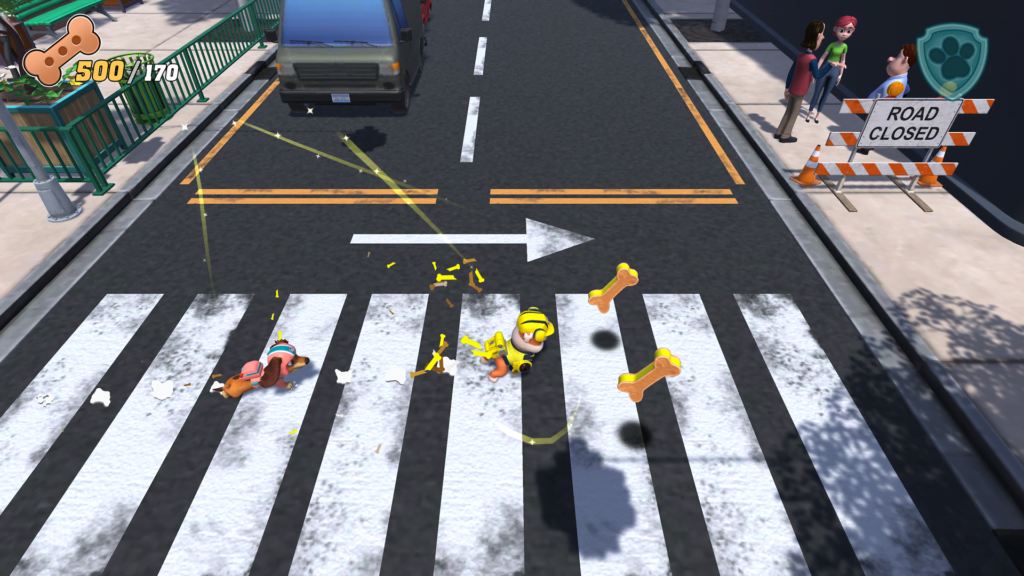 Some features that may be easier to overlook for younger players such as in-game tracking for collectibles in the main missions and side-missions would be nice to have for older players but as the experience is geared towards a younger audience, it would be unfair to use these as criticisms against the title though to ignore mentioning them would be a disservice to the mature audience that read this review or play the game.

Visually, the experience is a faithful 3D adaptation of the beloved kids TV series, and the character design and environments are playful and charming, bright, and colourful and are wonderfully complimented by a very fun, energetic, and upbeat soundtrack. Drakhar Studio have absolutely nailed the presentation and feel of the PAW Patrol world. The only thing missing is any voiceovers for the pups, Ryder has the only speaking role in the game before, during and after missions. 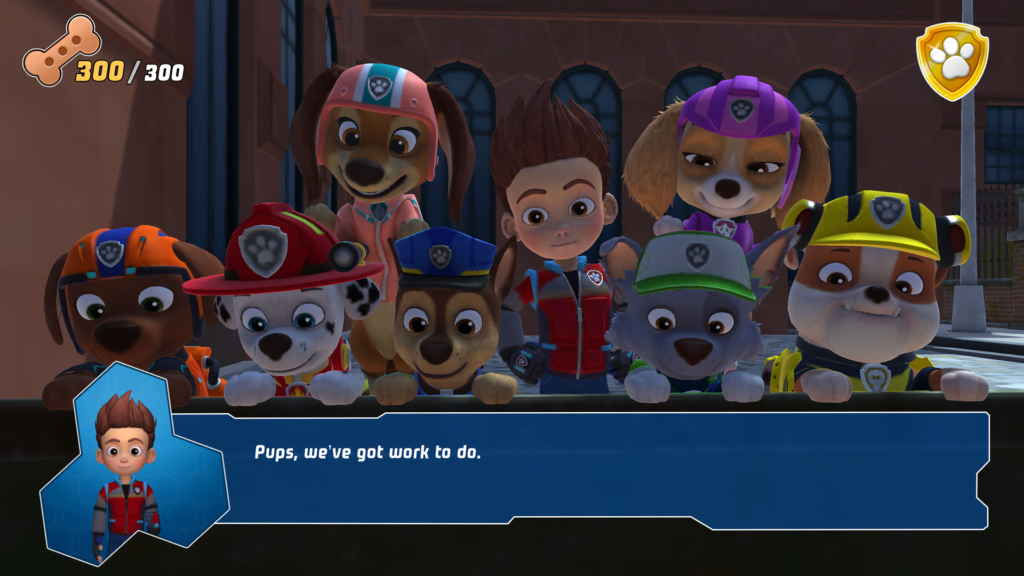 PAW Patrol the Movie: Adventure City Calls is a great experience for young players. By offering story missions full of playful adventure, fun and accessible mini games, and a wealth of additional mini games to enjoy outside of the story and full local co-op support, the experience can be enjoyed by children with their friends, siblings, and parents. The brief runtime of each game mode or mission makes it very friendly for brief game sessions.

As a father to three and four-year-old sons I can comfortably say we had a great time playing this together and I would be lying if I said the PAW Patrol titles aren’t a guilty pleasure of mine. By providing an experience that can be enjoyed by players of all ages, PAW Patrol the Movie: Adventure City Calls is a great addition to the family friendly space dominated by publisher Outright Games. – Lack of any voiceovers for the pups

– A little too easy, perhaps even for younger players