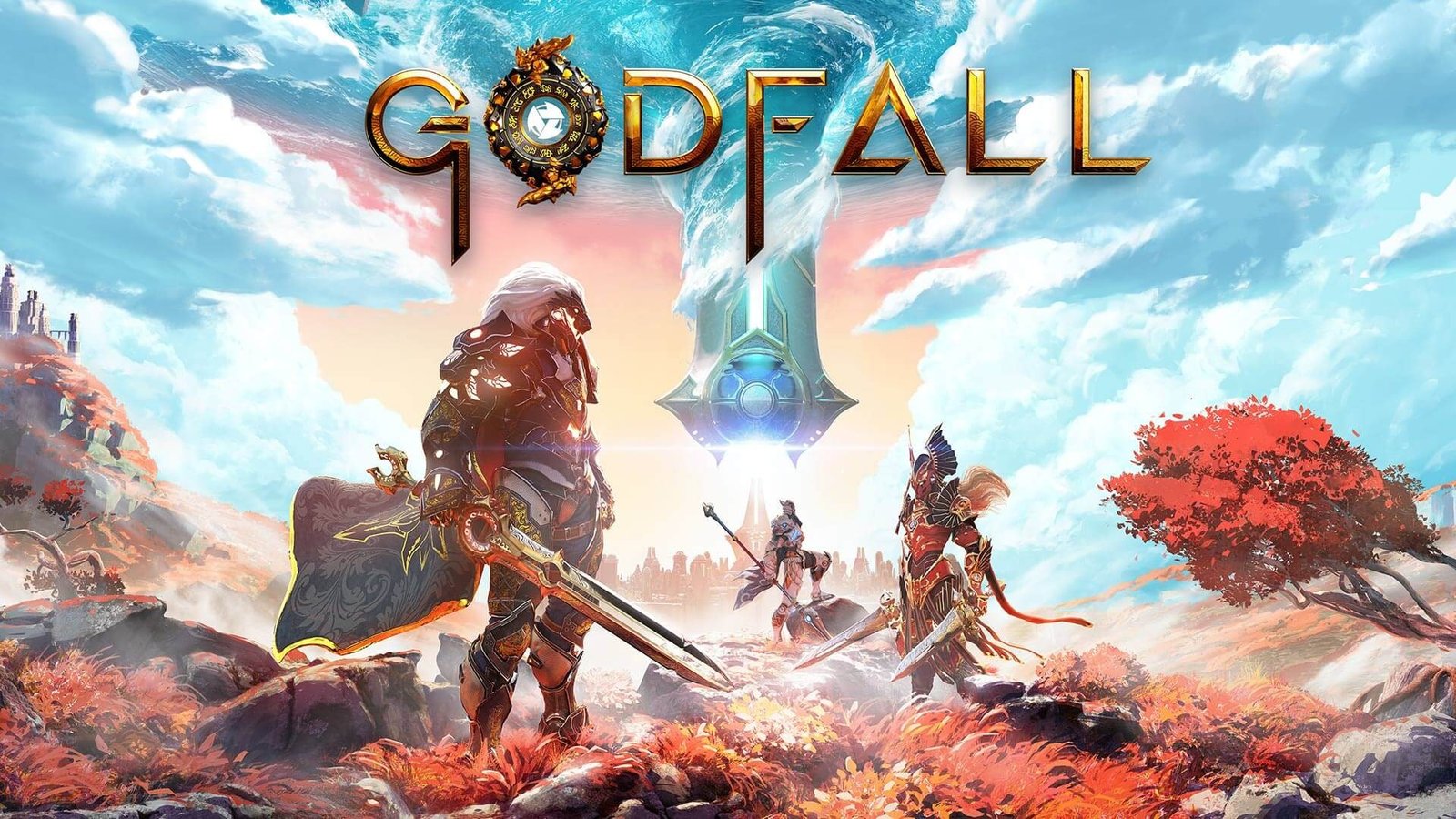 Developed by Counterplay Games Godfall originally released as a launch title for the PlayStation 5 back in November 2020. Nine months later in a rare move Godfall has found its way to the PlayStation 4.

A third-person action RPG looter set in a mythological world of God-like warriors in striking armour, Godfall tells a tale of betrayal between two brothers with the player’s character Orin set to stop his brother Macros.

Combo-driven combat utilising a fun variety of melee weapons and a shield make for an enjoyable near-ten-hour adventure. Play time can be exponentially blown out by exploration, side-missions and grinding for better gear drops and customisation by farming resources.

Betrayed by his brother Macros, Orin must stop his brother from collecting a powerful energy known as Aetherium to become a god and destroy Earth. Upon discovering an AI-like entity known as the Seventh Sanctum, Orin is given guidance and tasked with bringing down Macros’ lieutenants to claim their Aetherium before Macros can. Each conquest empowers him with the Aetherium instead and only when all have fallen will Orin finally be powerful enough to confront his brother. 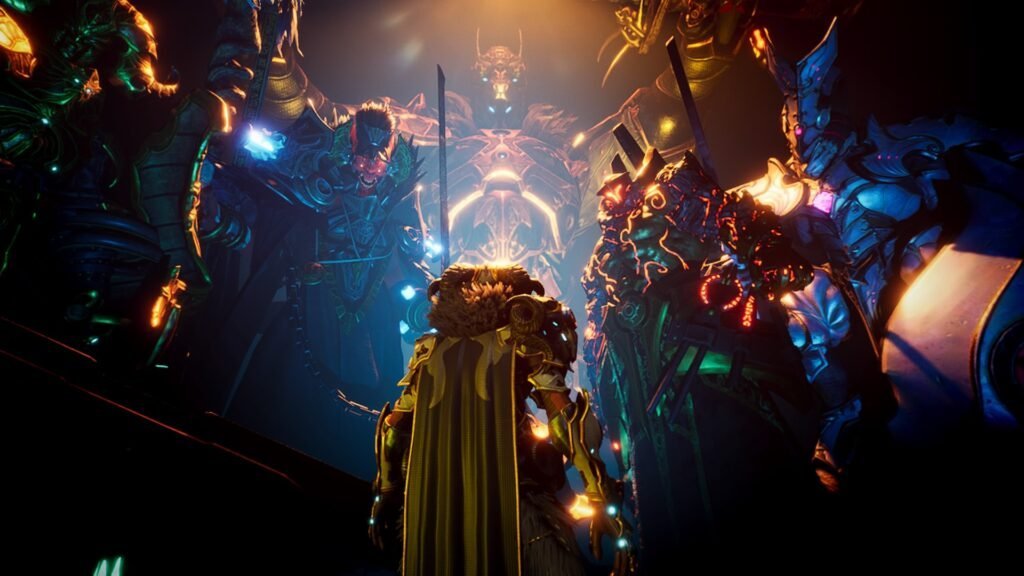 The story is simplistic in the sense it pits the player on a rather linear journey to gain strength and defeat the villain. Where Godfall takes a step above the generic path is its interesting lore and deep world building. The scope is so grand, mythological and fantastical, with new ideas frequently introduced that continue to evolve the story and world it takes place in. 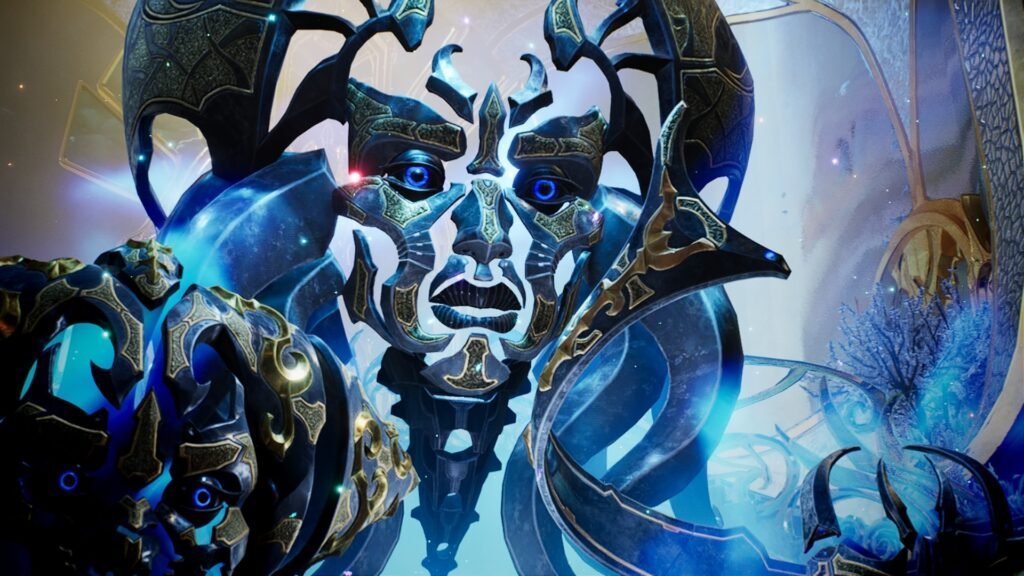 The world of Godfall is divided into realm named after the elements of Earth, Air, Water, Spirit and Fire. Each of these realms have unique enemy variants and elemental resources required for crafting upgrades and new Valorplates, epic armour sets worn by legendary Archon warriors of the past. 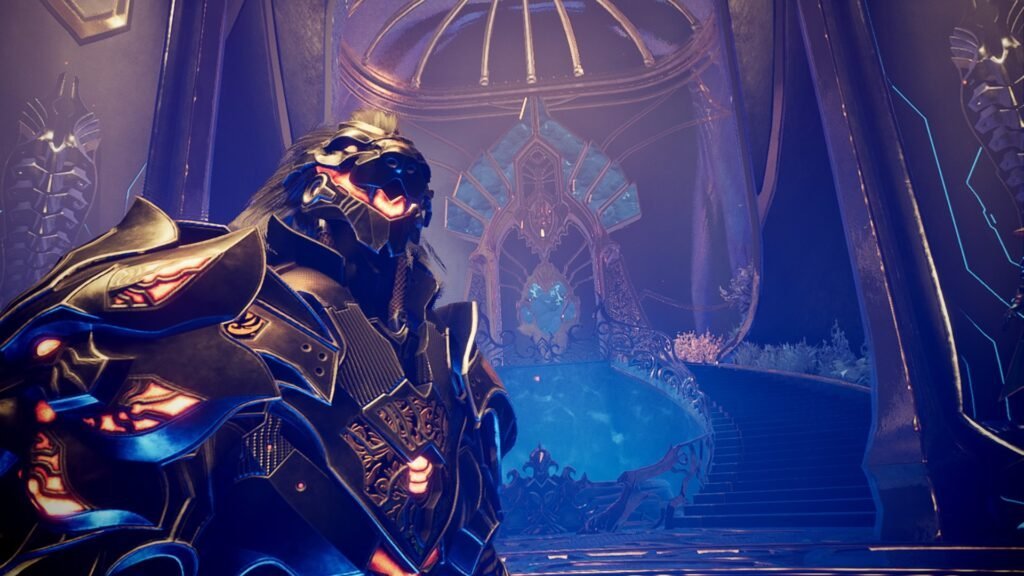 There are 12 Valorplates to craft, each inspired by signs of the Zodiac, and each offers a unique passive trait, Archon Fury ability and augment constellation. 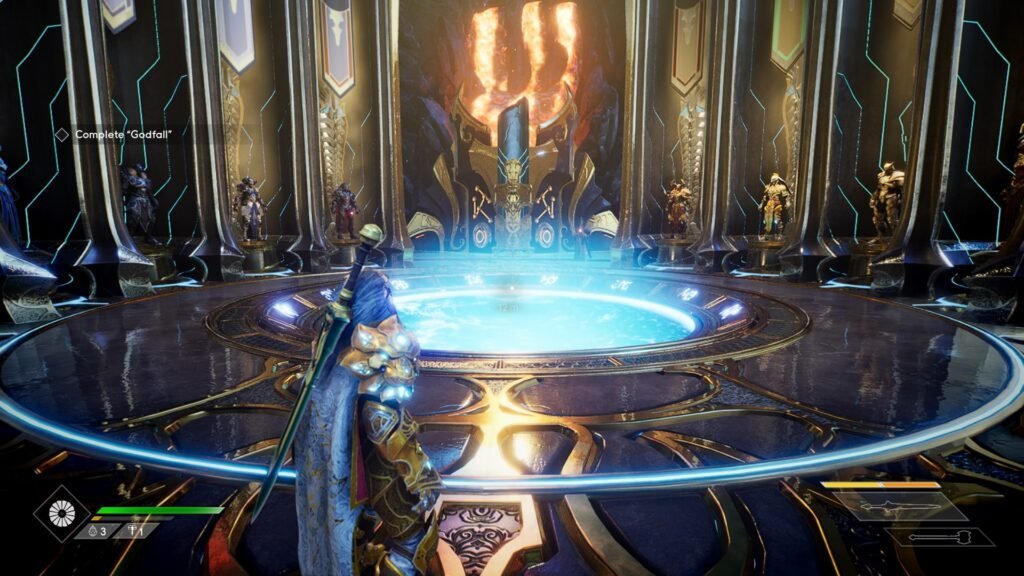 Archon Fury abilities are essentially special attacks that can be unleashed when a meter has been filled during combat, these temporarily empower Orin and allow for massive damage to be dealt while active. The duration of Archon Fury can be extended via skill tree upgrades. Augments can be assigned to the Valorplate’s unique augment constellation that improves Might, Vitality or Spirit – weapon damage, max health or life stone recovery and ability damage.

There are five weapon classes in the form of longswords, greatswords, dual blades, polearms and warhammers. Variants can be found through exploration, as enemy loot drops, mission rewards, opening chests or from the vendor in the Sanctum hub-world accessible between missions. A primary and secondary weapon can be equipped as can an assortment of gear pieces such as charms, amulets and rings that all afford passive traits and in most cases stat boosts. 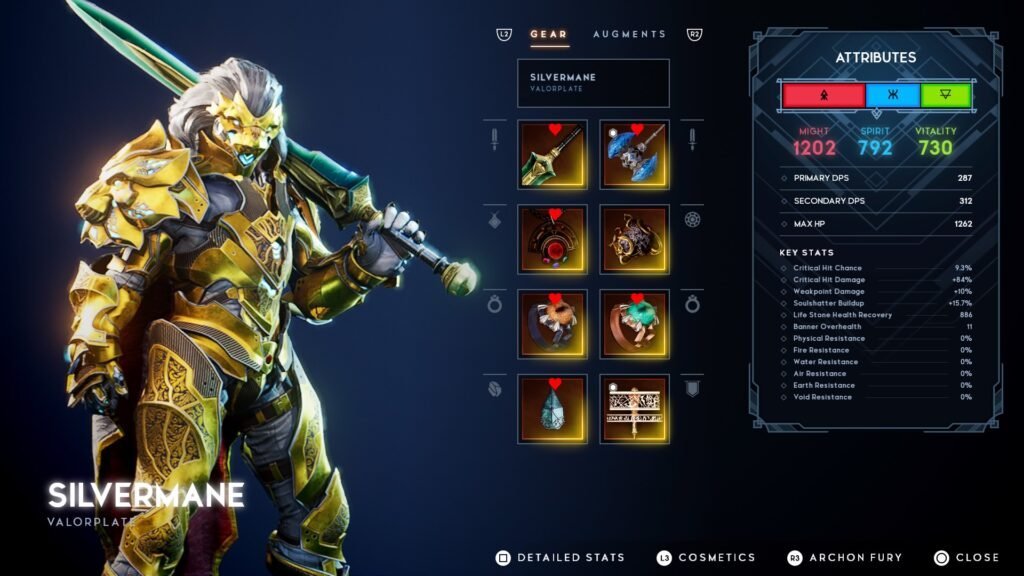 All gear in Godfall comes in tiers ranging from common through legendary and can be Enchanted in the Forge at the Sanctum to have its rarity increased. Finding and upgrading gear is essential to become more powerful and tackle the end-game content which is largely centered around tower challenges, essentially wave-based combat that gets extremely difficult and requires high level gear to survive. Completing these awards alternate skins for Valorplates and valuable crafting resources as well as higher tier loot drops. 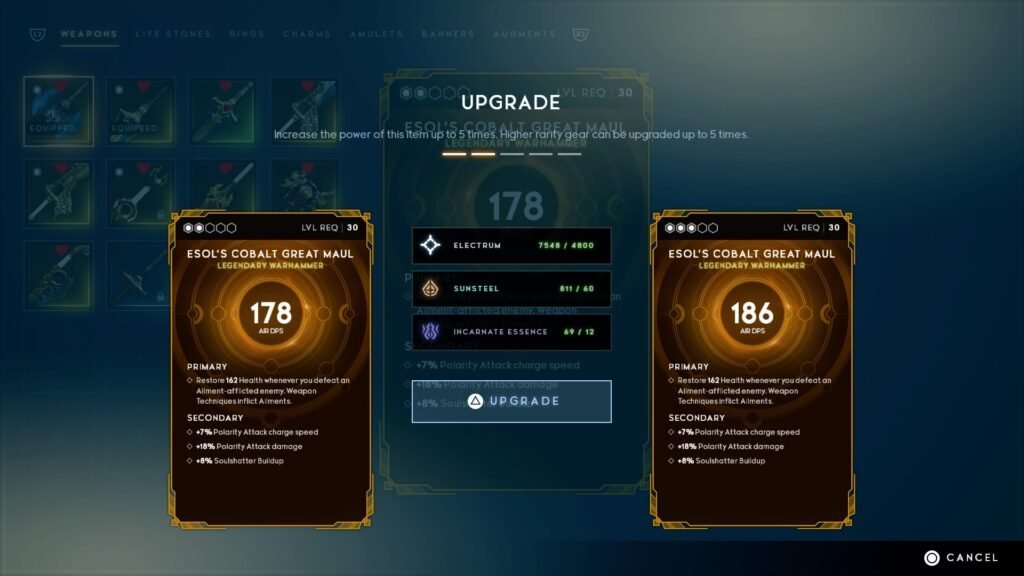 Each mission is fairly linear with a waypoint guiding the player towards the primary objective while also offering optional objectives that provide bonus rewards. As the game progresses new areas of the map become accessible. As each of the five realms only has one map the missions can feel visually repetitive, taking place in the same sections of the map until new areas are opened later. This unfortunately means majority of the game has the player passing through the exact same sections mission after mission. While each of the five realms are visually distinct it’s a shame the missions weren’t confined to unique parts of the map instead of being open. 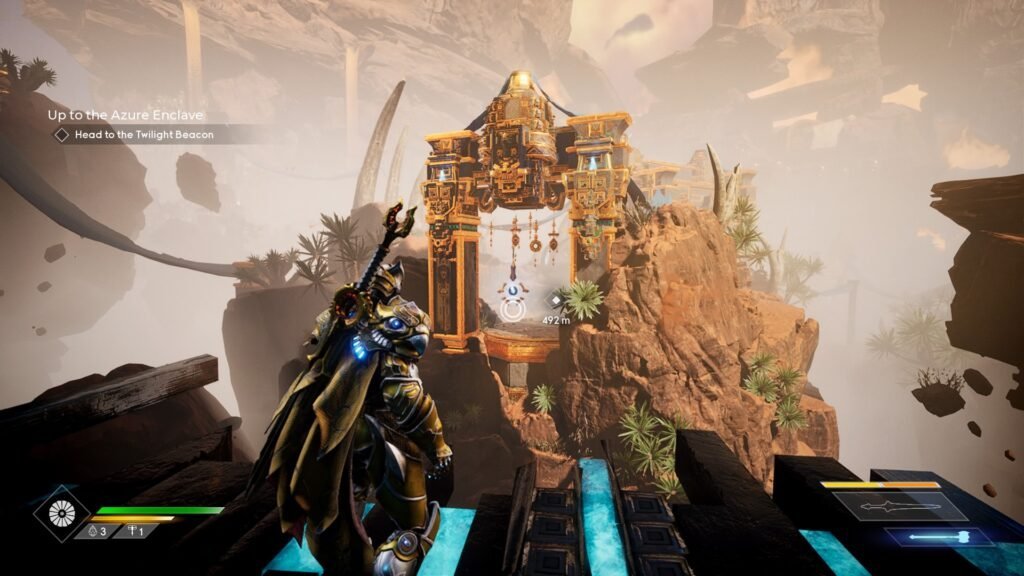 Low ledges can be climbed and large gaps can be crossed by aiming at a floating blue phase node and holding circle to perform a fast, flight-like leap. Combat is less restrictive and actually quite enjoyable. Equipped with a shield that can be thrown like Captain America, it can also be used to block, parry or deflect projectiles. Mastery of this defensive asset can have major offensive implications that can turn the tide of battle, especially when outnumbered. The shield can also be used to destroy objects during the numerous environmental puzzles. 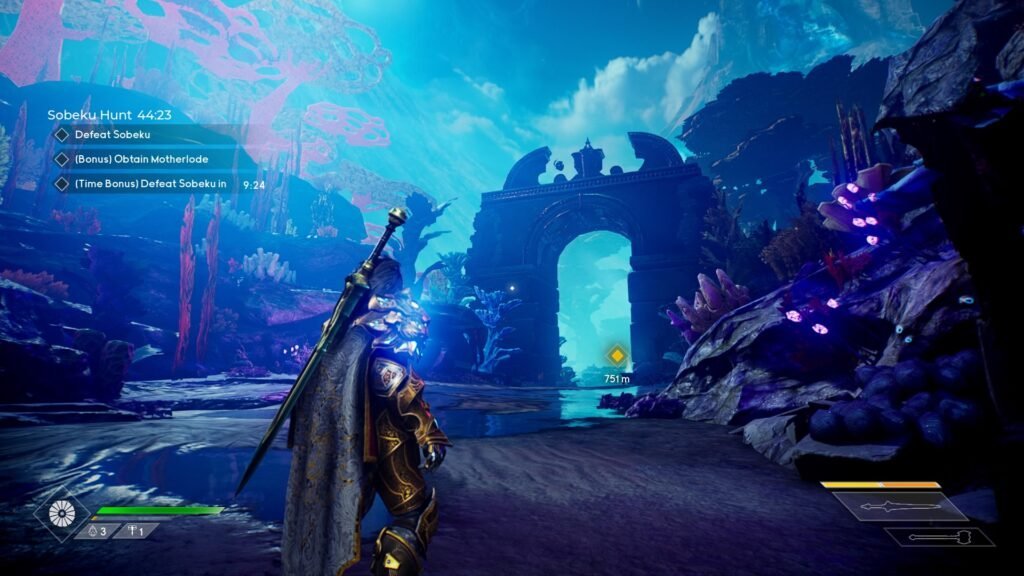 Regardless of weapon class, all weapons have a light and chargeable heavy attack. Using evade to constantly move around the battlefield and avoiding enemy attacks while stringing together combos of light and heavy attacks is highly recommended. Staying still is almost certainly a death sentence due to the poor lock-on mechanics and unavoidable enemy attacks when they are glowing red. These attacks deal significant damage and can’t be blocked or parried. The player is also unable to block mid-attack which requires more care and consideration for timing their next offensive or defensive move.

Health can be replenished by picking up vitality orbs dropped from defeated enemies, opening chests or using the recovery stone. When vitality orbs are picked up and the player is already at max health, they are turned into recovery stones which can be used by pressing square to restore health. These come in very handy especially against the higher-ranking enemy types and boss battles.

Special attacks can be unlocked via the skill tree to aid in combat. Aside from new combat abilities the skill tree contains stat increases to vitality, might and spirit. Skill points are earned by leveling up Orin, with a single point awarded with each level gained. Experience is gained from combat, completing objectives and missions. 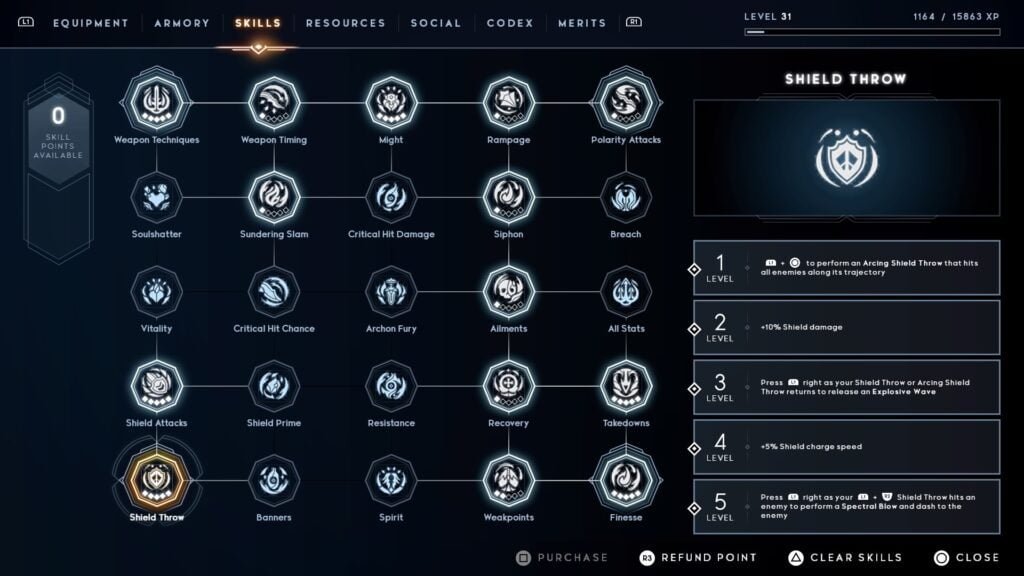 The world is striking, visually beautiful in its varying levels of decay. Broken ruins, grand palaces, barren volcanic wastelands and water worlds are glorious to take in. Each realm feels grand in its own way and allows Godfall to feel as mythological and fantastic as its premise establishes. Character designs are cool and unique, with each enemy variant feeling different. The weapons and Valorplates are equally impressive and embrace the larger-than-life themes of the title overall. 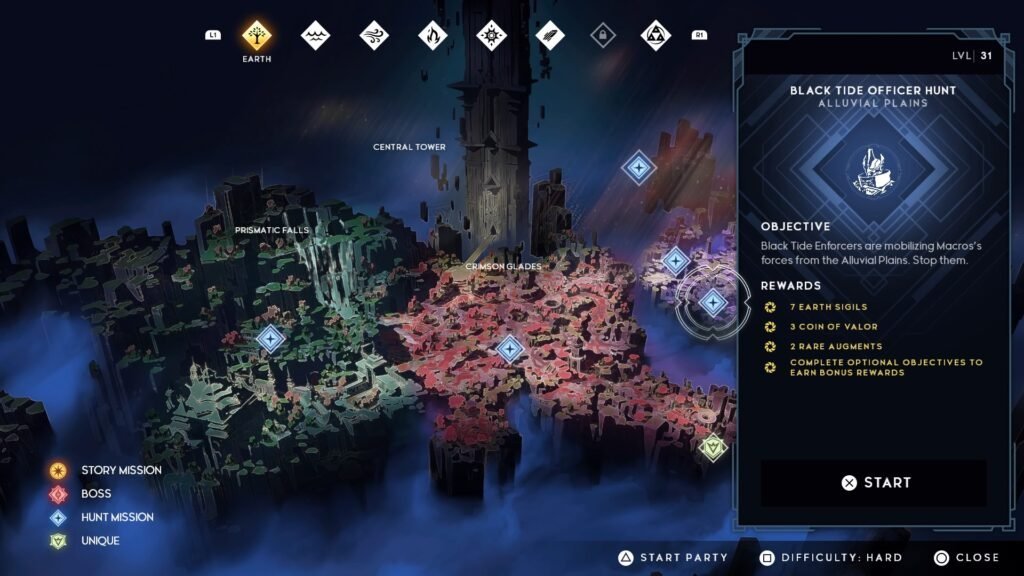 The score is a blend of ominous, godly and tribal-like war music that really only makes its presence felt in combat. Stakes feel high and combat has an added layer of dramatic tension as a result. The overall presentation is competently grand and mythological, epic and world-ending. Godfall genuinely looks, sounds and feels like a realm of the gods. 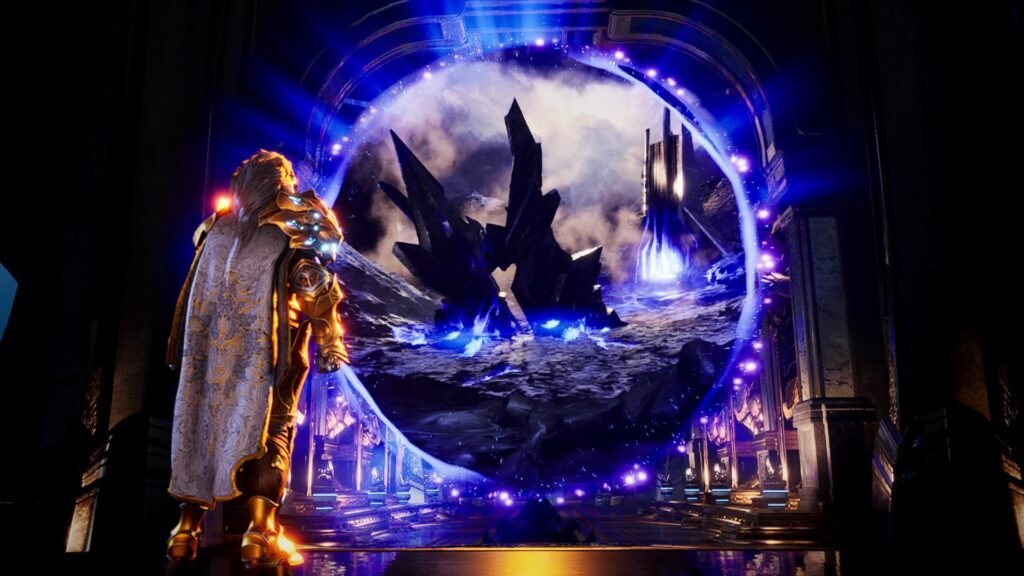 Godfall is an enjoyable experience despite the repetitious exploration of the same environments in the earlier stages of the game. With progression each realm opens up a little more but not enough to make each realm feel less fresh and new. A poor lock-on system during combat and the inability to block mid-attack keep the combat from feeling more free-flowing but overall these issues are outweighed by the fun customisation and godly scope of the world that has been built. 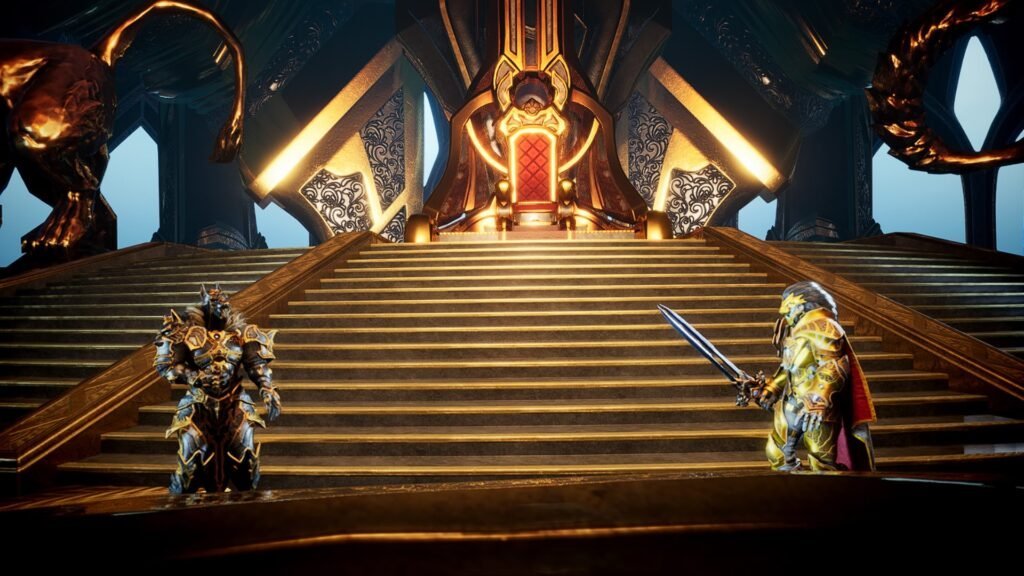 With a story that takes less than 10 hours and dozens of hours worth of end-game challenges and better loot-grinding Godfall has enough to satisfy those with a narrative focus, those that enjoy the thrill of the grind and quest to being unstoppable and players that like a bit of both. Godfall is very impressive on the PS4 and despite the obvious improvements it’s PS5 undoubtedly presents, it’s great for players who haven’t yet made the console leap to be able to experience it nearly a year later.

– Missions take place is essentially same location in each Realm