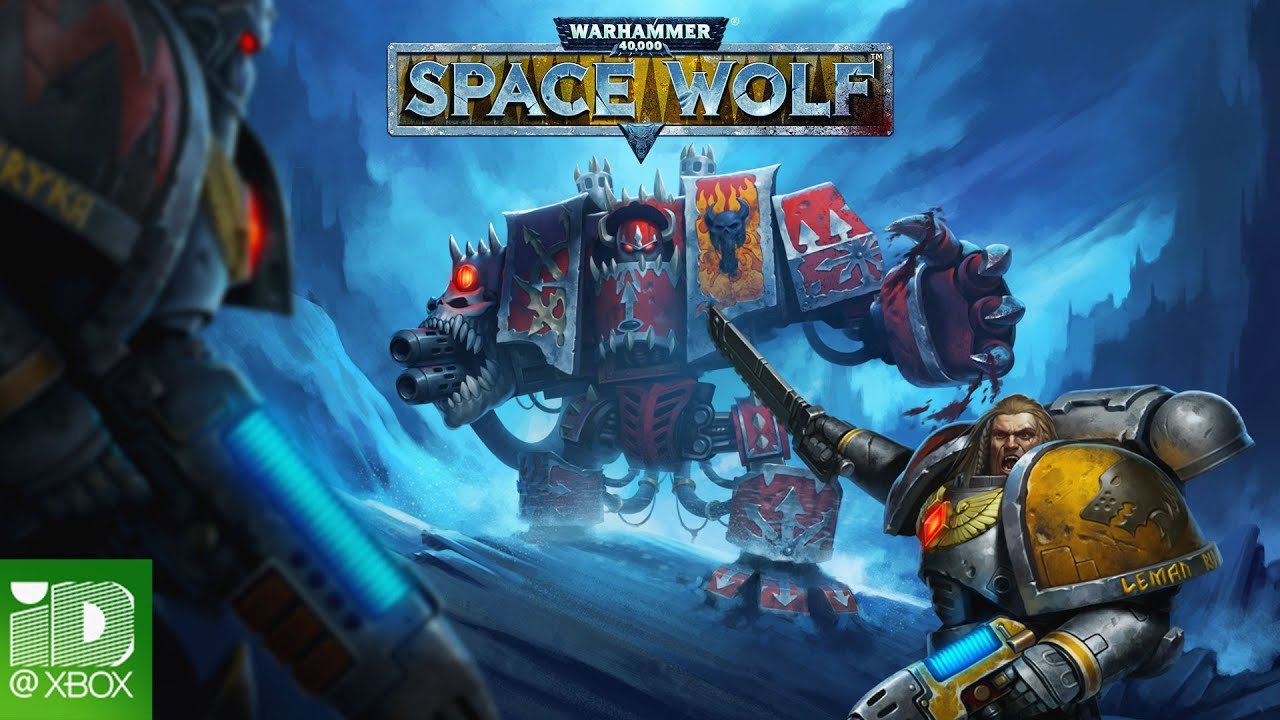 Originally a free-to-play mobile game that released back in 2014, and saw release on PlayStation 4 in 2019, Warhammer 40,000: Space Wolf has finally made its way to Xbox. Blending turn-based strategy and card-based abilities results in an interesting experience that is likely to find itself in the love it or leave it camp. Fans of the genre and franchise will find a little more to enjoy than newcomers.

The story focuses on the Space Wolves, a sector of the Space Marines, upon crash landing on a volcanic planet named Kanak, inhabited by their enemies, the Chaos Marines and Cultists. Sprawling campaigns full of branching storylines, it feels as though there is a significant portion of backstory missing. There’s little explanation about who, what and why in regards to majority of the characters gradually introduced, the nature of the conflict and why everything is unfolding. 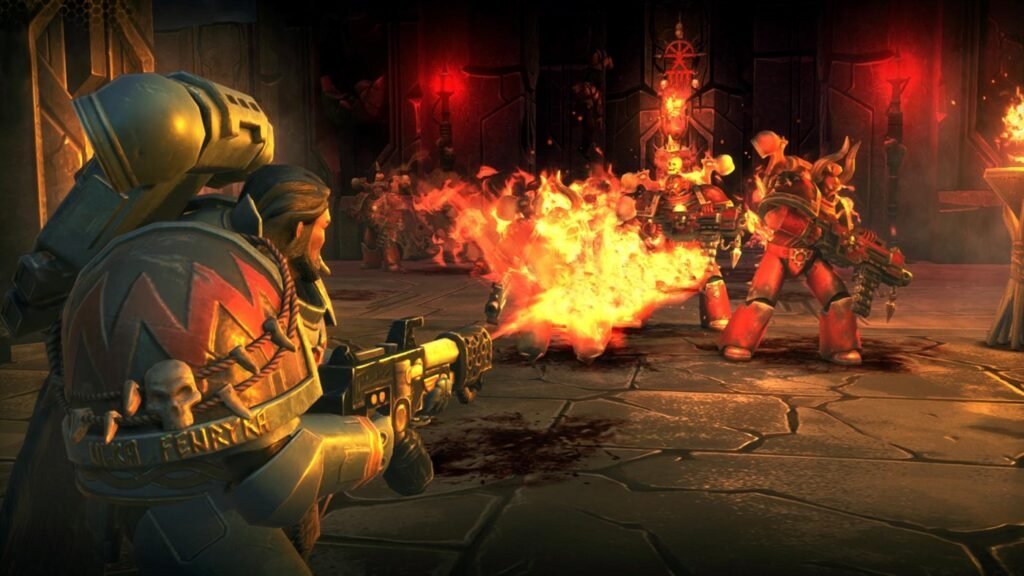 Perhaps prior knowledge of the franchise may shed some light but as a newcomer the experience should be self-contained and able to be played through with enough context on its own merit. With dialogue essentially limited to the opening and closing moments of each mission via a text-based chat. Aside from the campaign there are four challenges to play that, as will become familiar throughout this review and the game itself, have no context of what they are before selecting it. 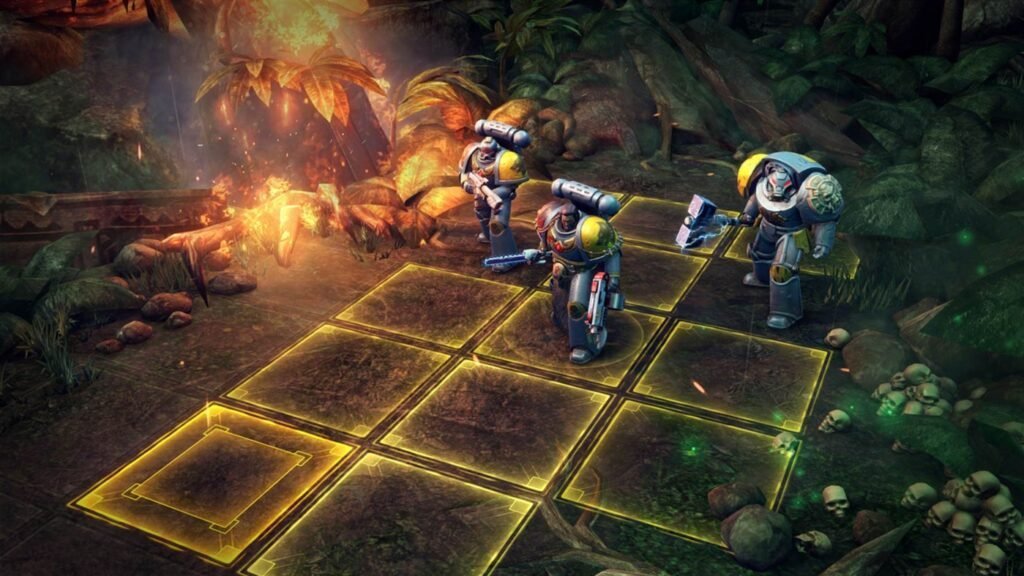 A brief tutorial introduces players to the basics of the gameplay. As it relies heavily on the luck of the cards drawn, your next move is hard to calculate ahead of time. Melee and ranged attacks, temporary items or movement cards all require effort to use. The more effort the card requires, the longer it will take before that character gets a turn again.

Each turn allows for only two cards to be played, so careful consideration of your hand is required to determine what may work best for now and what could better be left for later. Simply changing the direction your character faces uses a turn… Some cards use a turn to simply be equipped, unable to be used until the next turn. This calculated risk can often pay off but as I experienced, one slight miscalculation such as this can see the match turn into an onslaught from the opposition. 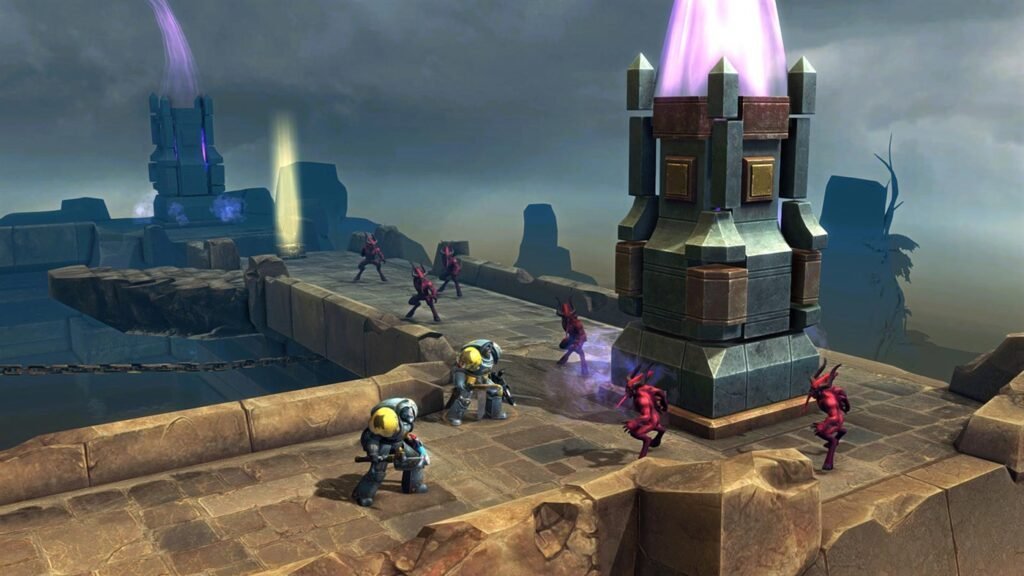 Most cards have a range which relates to the grid-based battlefield where you can move to, reach with a melee weapon or shoot. The overall concept is interesting and fans of the genre will have little trouble wrapping their heads around it but it doesn’t make for the most user-friendly experience for newcomers to the genre. Brutal defeat due to a single mistake allows for frustration to settle in rather quickly. 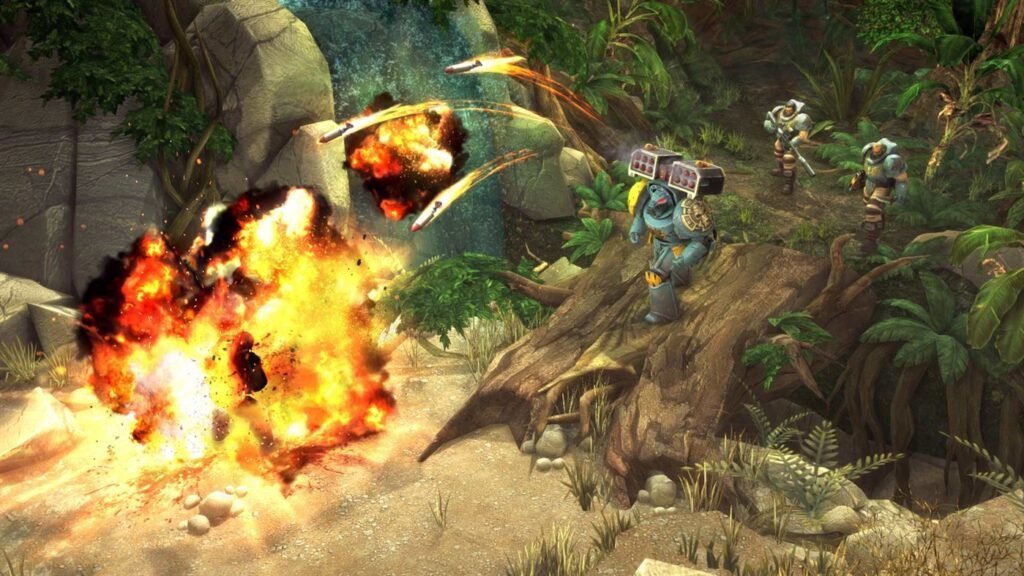 Unseen trigger points within the map have the potential to unfairly punish and cripple the player’s hopes of winning. In particular, some maps – possibly all, have certain tiles that can be moved to that spawn in new enemies with absolutely no warning. When only one or two of your team is alive, this almost certainly spells defeat. It makes no sense for these to be unseen, some sort of warning could alleviate a lot of frustration.

Speaking of spawning enemies, this tends to happen no matter how swiftly you eliminate the opposition. The point seems to be to simply get to the objective rather than actually defeat the enemies that block the way. Again, communicating this instead of stumbling across the realisation would have been common courtesy. 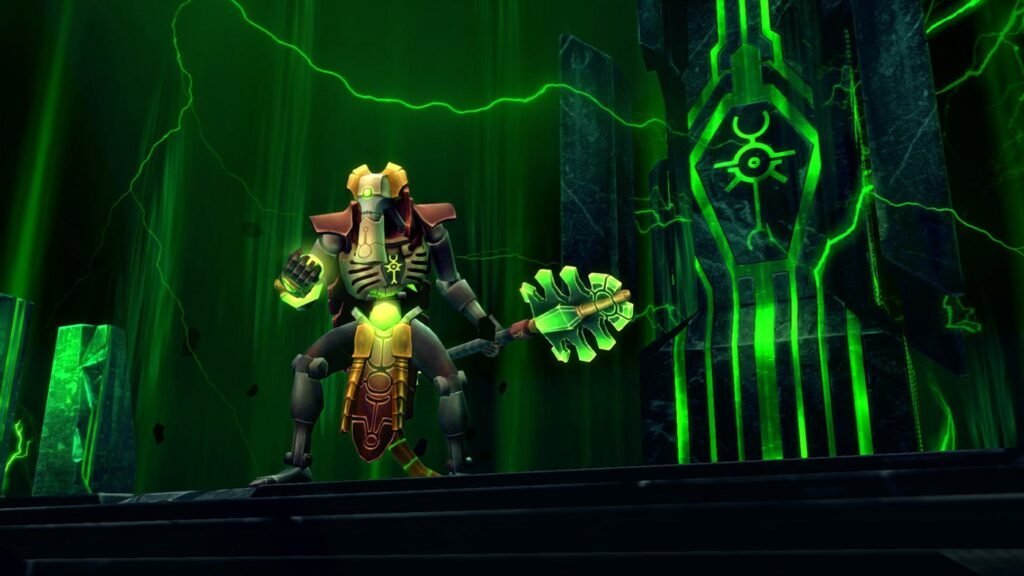 The armoury in the main menu can be used to upgrade your main character but how to do so isn’t explained. Cards can be upgraded and swapped from your 3 main decks, also with no explanation. Points earned throughout the campaign can be used in the Forge to unlock new cards or booster packs. Explanation of how all of this works would be great as a lot of it is simply trial-and-error. 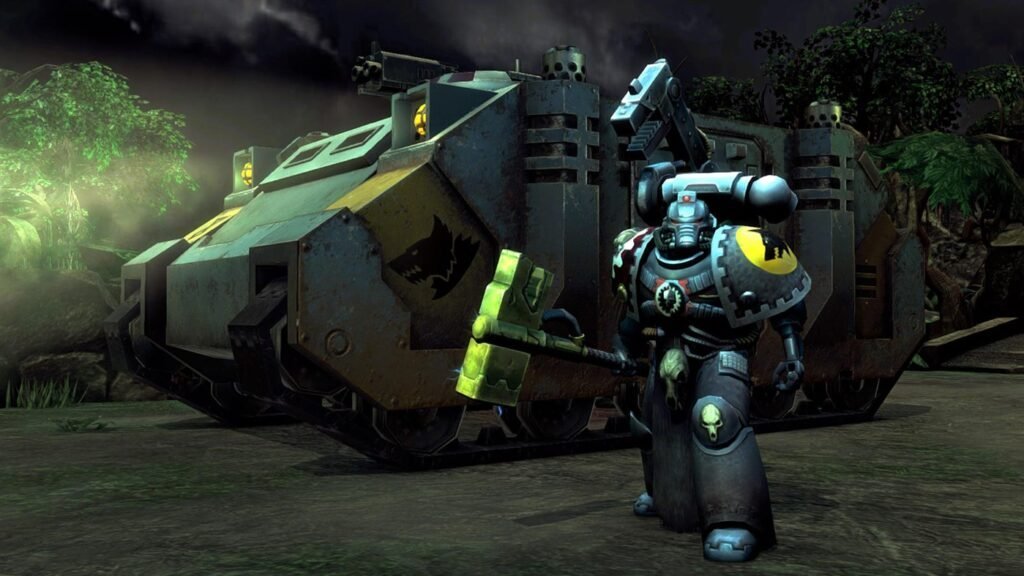 Visually, Warhammer 40,000: Space Wolf is certainly dated and the animations have aged as poorly. The gameplay is admittedly interesting though a complete lack of explanation for majority of the game’s mechanics and even its story leaves a lot to be desired. First time players of the genre or a Warhammer title will be left bewildered, a shallow experience that is only a tutorial or two away from making sense.

+ Gameplay is enjoyable when you know what you’re doing

– Lack of tutorials or explanation of gameplay mechanics 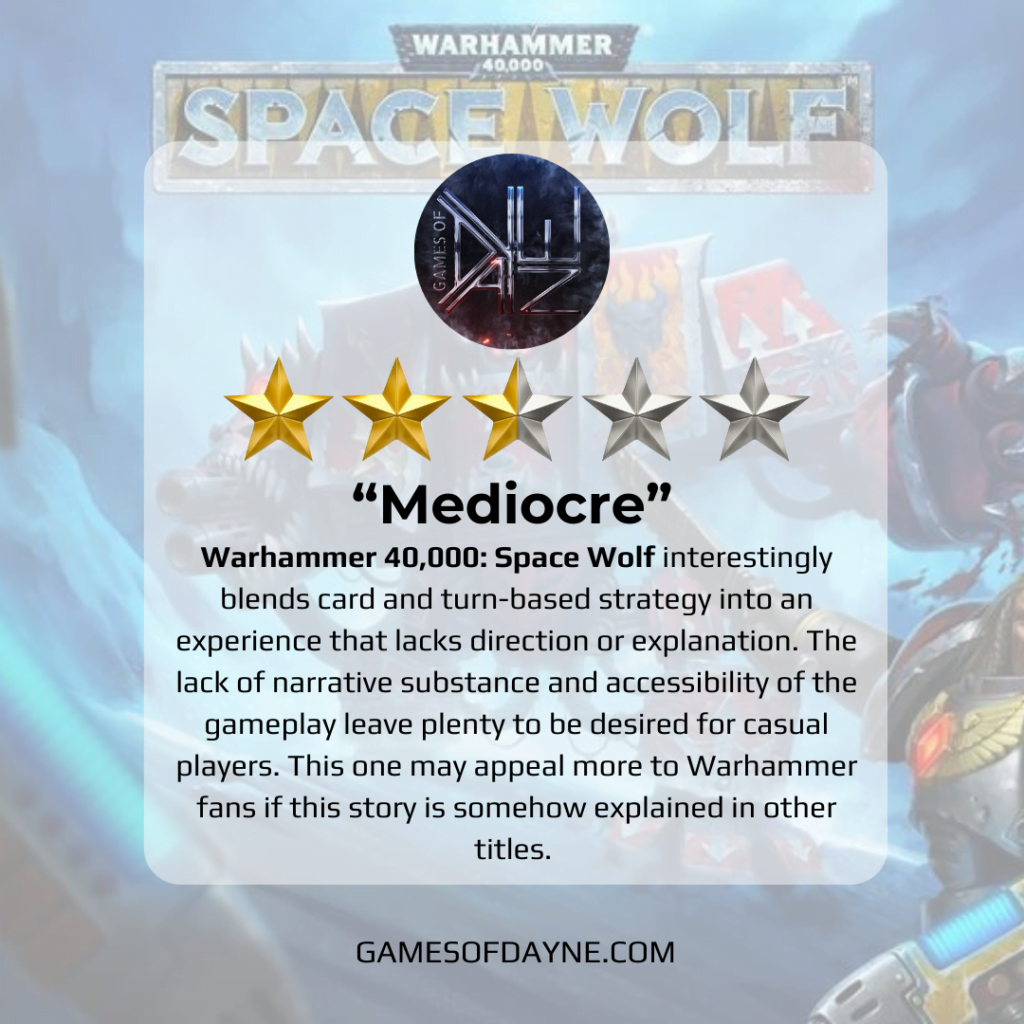