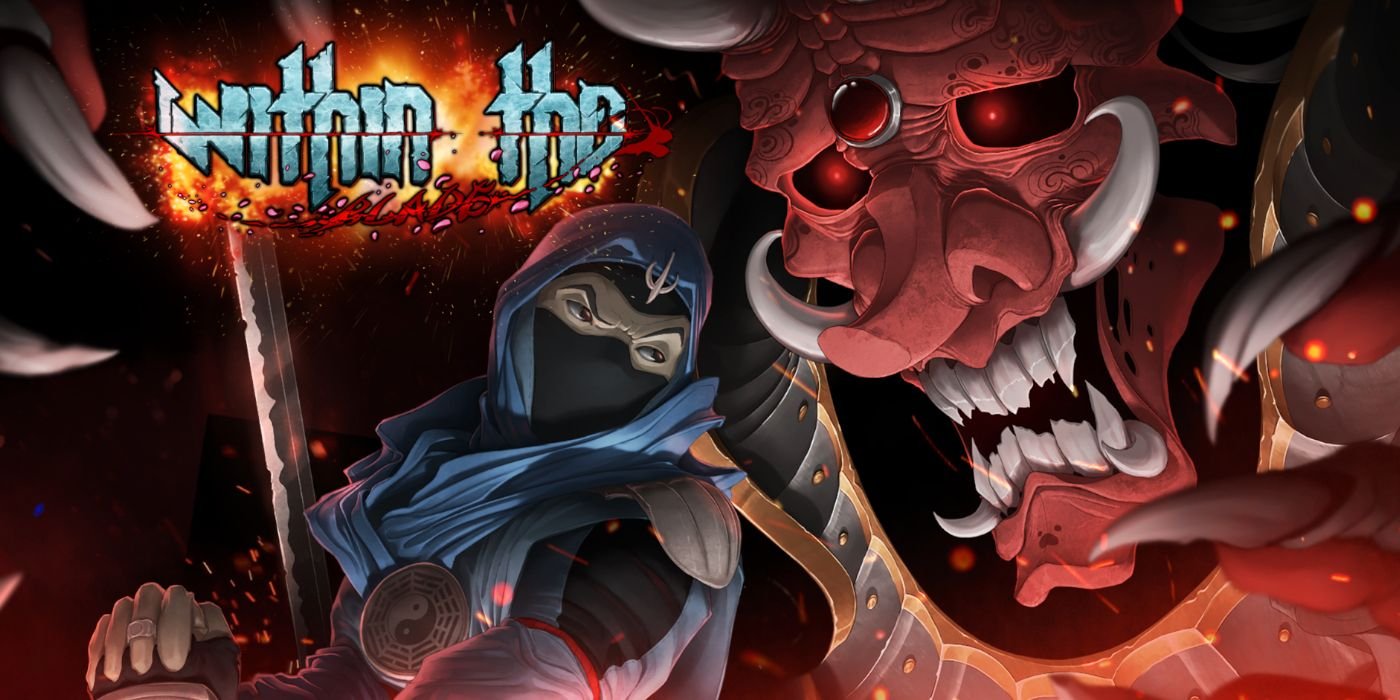 Within the Blade is a stealth action platformer that tells the pixelated tale of Hideaki, a ninja of the Black Lotus clan. Tasked with slaying rival clans, rescuing prisoners and restoring his village, the player embarks on a rather challenging adventure where the blood shed is just as likely to be your own. Featuring a surprisingly deep skill tree and variety of abilities, weapons and gadgets, Within the Blade is a retro experience that will likely satisfy fans of the genre or frustrate casual players depending on their timing.

The pixelated world playfully blends shadows and flashes of vibrant colour, particularly when blood is spilled, as the player jumps, wall-runs and platforms throughout the 25 levels. Each unique enemy type is easy to identify upon first glance, ranging from archers, common katana-wielding samurais and heavily armour-clad variants that won’t budge. Taking advantage of the battlefield by jumping, dashing and dropping to lower levels add an interesting flavour to the many combat encounters. Initially it is very easy to die, and death will send the player to their last checkpoint which unfortunately are few and far between. 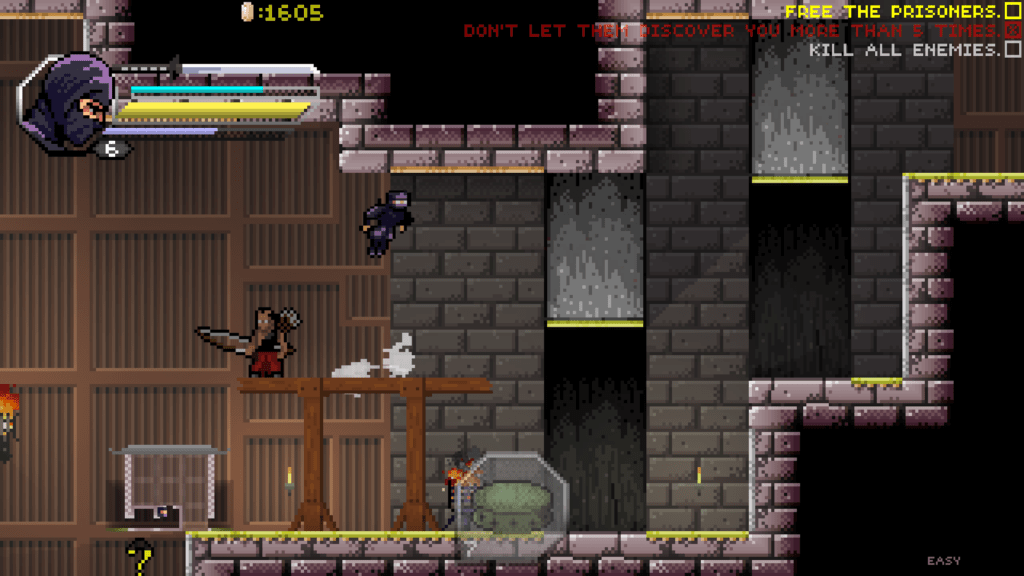 Frustration will likely settle in early until a few levels can be passed and coins can be collected to spend on a plethora of skills that add new abilities or increase stats like health. Even with a few upgrades under your belt Within the Blade feels constantly challenging – maybe that’s due to my limited experience with these types of titles but  some of that can be attributed to some touchy controls that may lead to some unresponsive actions in the heat of battle. On several occasions an attack or jump wouldn’t seem to register. At first I thought this was on my end but switching my controller for another had the same result. These issues would regularly lead to death in battle and as the checkpoints aren’t very forgiving, this grew tiresome quickly. 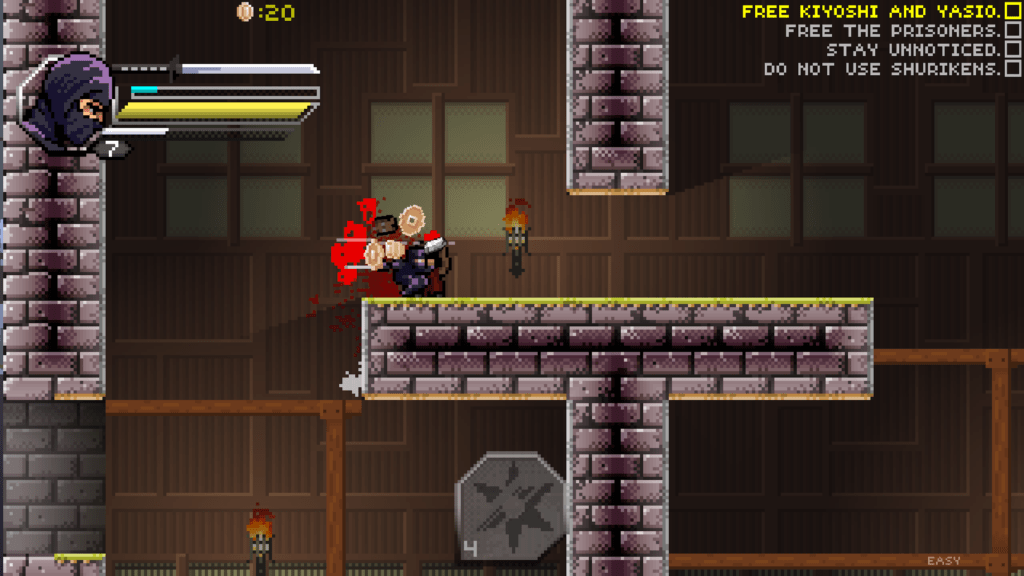 Each level has primary and optional objectives to complete such as rescuing prisoners or characters relevant to the story, killing all enemies or avoiding enemy detection for example. The level cannot be completed until the primary objective has been completed. A map of sorts rests in the bottom left of the screen, similar to those from dungeon crawlers, showing which rooms have been entered, any objectives or items of interest and of course rooms not yet explored. Even after death the map remains intact as far as what has been explored, which is very helpful given the number of deaths players are likely to experience. 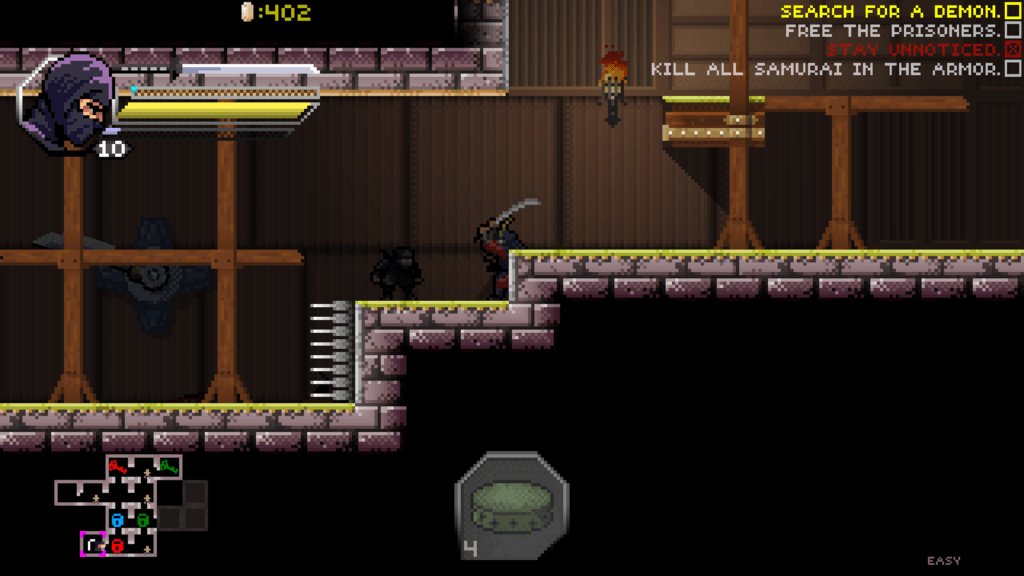 Various items can be found in chests or destroyable objects such as boxes and barrels that include weapons and throwables. As swords break down over time it is worth smashing everything to ensure you have a healthy supply of bombs and throwing stars to keep combat more varied and ranged than having to resort to fists, which in my experience almost always resulted in death. 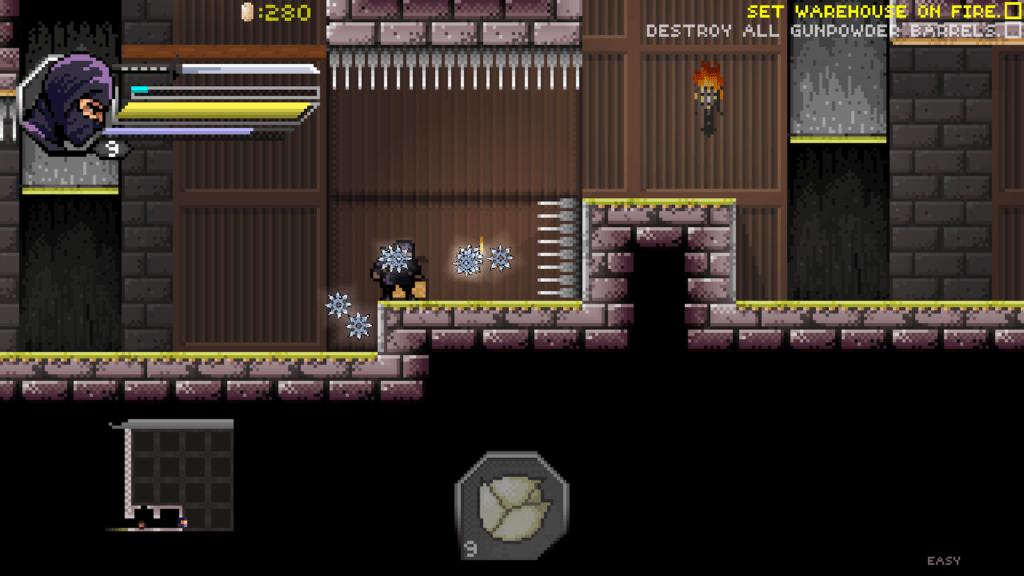 Assassinations can be performed by hiding in the shadows or tall grass which nets more XP and additional coins at the end of the level which can be used to unlock new abilities in the skill tree or items from the shop in the village which acts as the hub world that can be visited between levels. Crafting can also be done in the village with resources found with exploration. Recipes can be discovered or can be blindly crafted by combining the right ingredients. 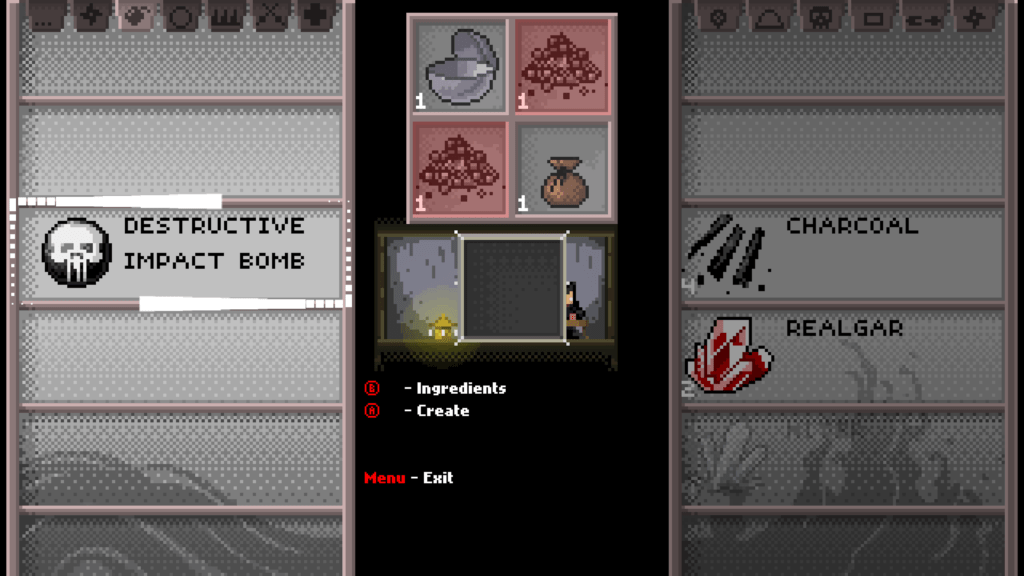 A plethora of environmental hazards such as fire, explosive barrels, trap doors, spikes and giant concrete columns that raise and lower in piston-like fashion keep the platforming and combat busy, requiring awareness of surroundings at all times in order to progress and avoid death. Having to consider all of this at once almost non-stop throughout Within the Blade adds to the layer of difficulty of the overall experience. Boss battles are also fairly difficult with each having large health bars and devastating attacks that must be avoided at all costs. Trial and error is a heavily emphasised point in this title and the boss battles are no exception. 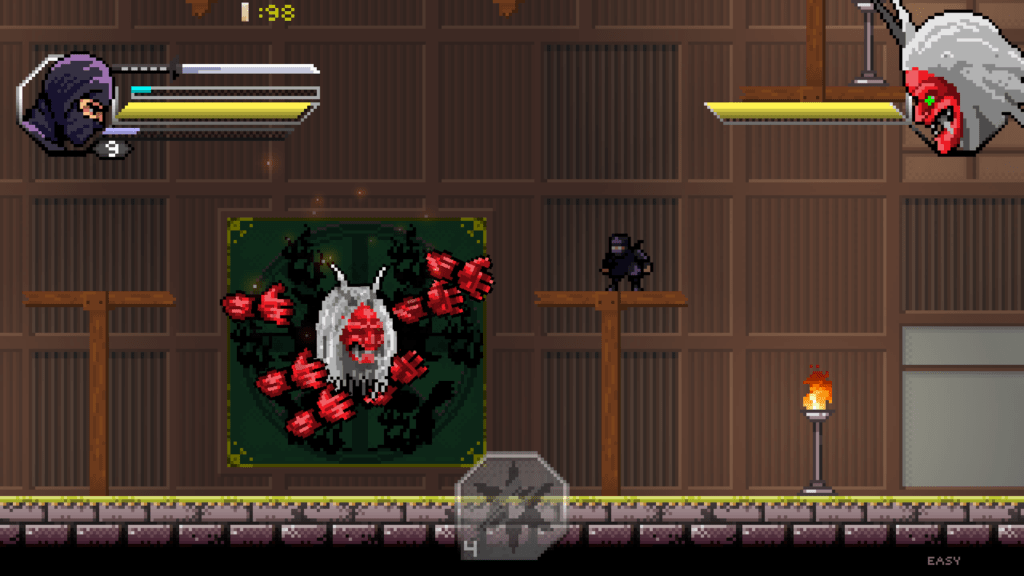 Within the Blade is challenging, surprisingly deep in terms of its gameplay mechanics and the overall pixel presentation feels a little lost amidst the blood soaked experience. Make no mistake, a lot of the bloodshed in Within the Blade will be your own and the trial-and-error emphasis on the gameplay is just as likely to infuriate casual players as it is to satisfy those that long for a challenge. 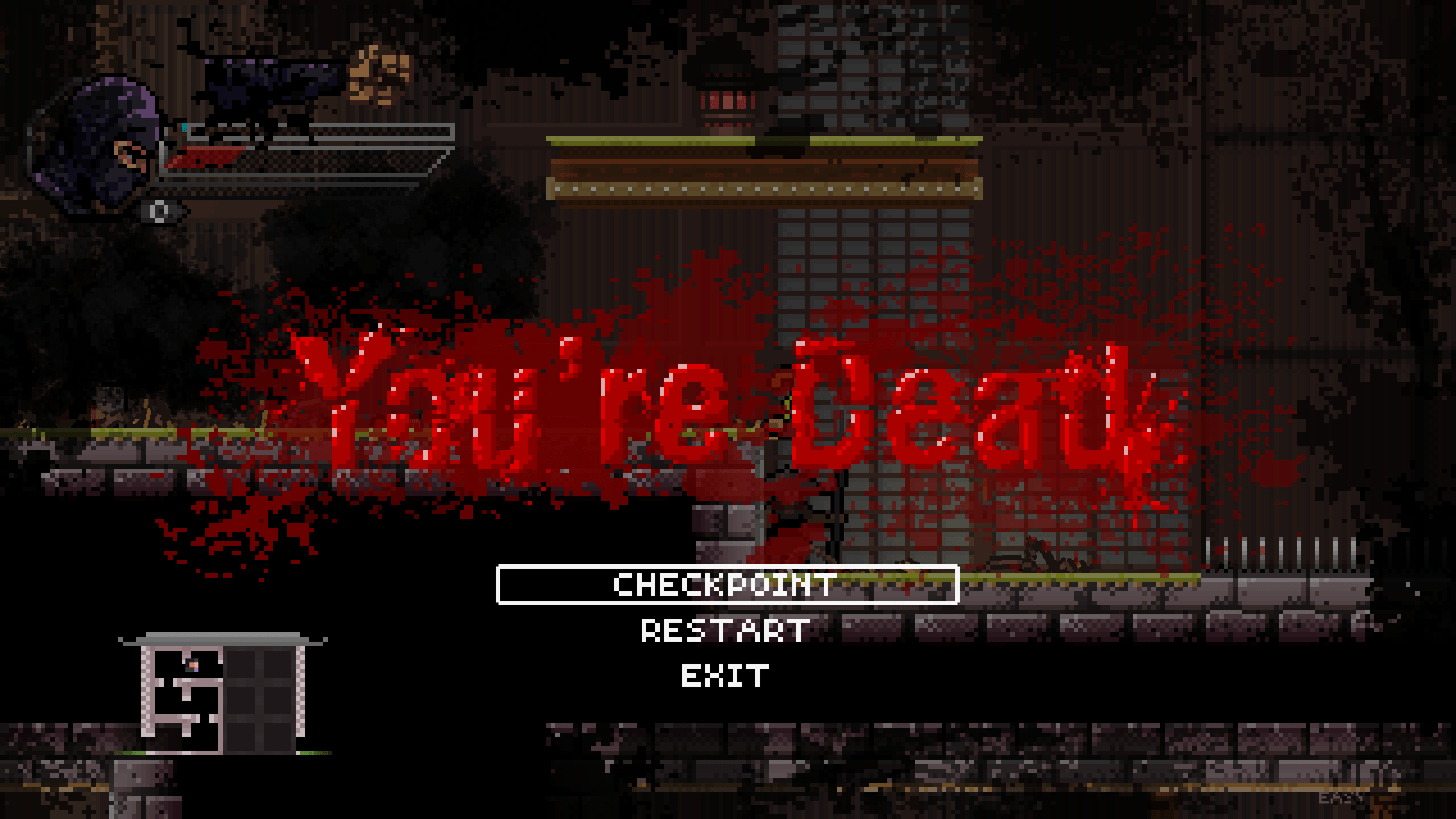