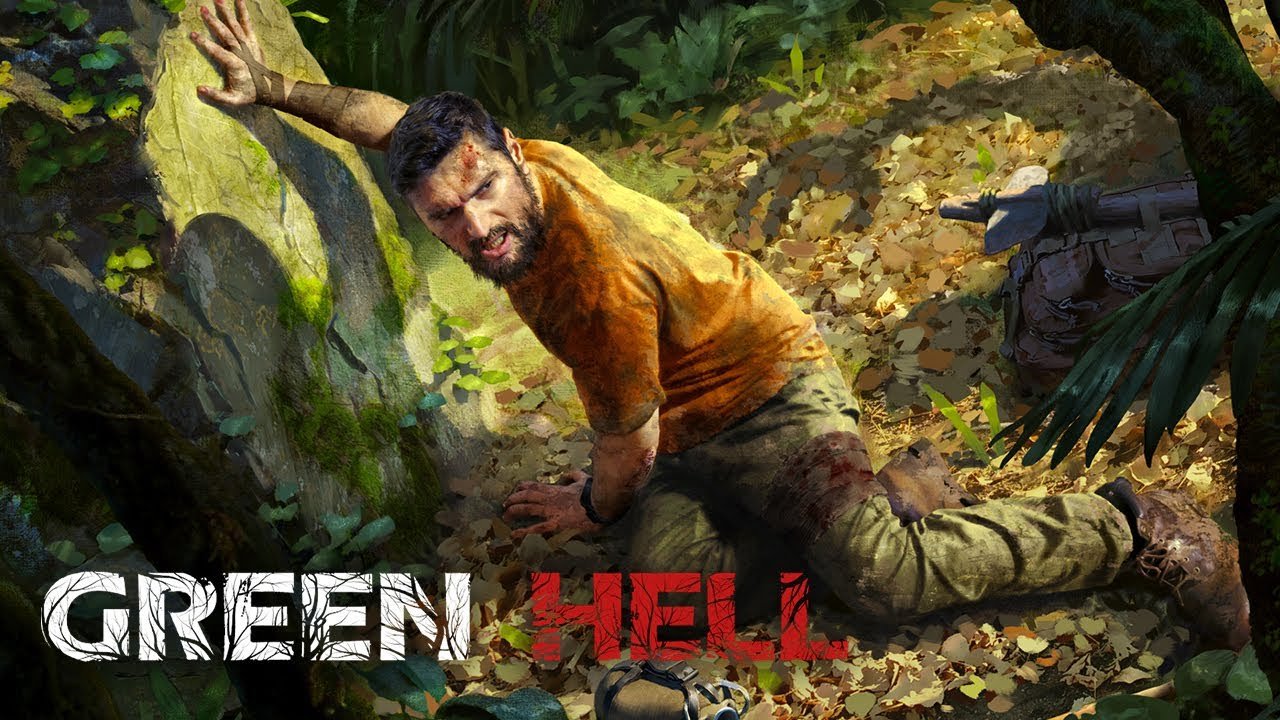 Surviving the dangers of an amazonian rainforest pushes anthropologist Jake to the brink of insanity in pursuit of his wife Mia in Green Hell. Mia’s experience living amongst one of the indigenous tribes goes awry, sending Jake on a dangerous mission to rescue her and escape the forest alive. Predatory wildlife and violent tribe-folk aren’t the only threat to the player with their wellbeing becoming just as much of a threat to their survival if not managed correctly.

Offering a single-player story, survival and co-operative survival modes, Green Hell is an endurance test for up to four players. Managing hunger, thirst, energy and sanity while scavenging the forest for supplies to craft shelter and weapons to hunt, survival is not guaranteed.

Green Hell is a first-person survival experience that has offers an excellent variety of difficulties to choose from. The option to enjoy the story with no predators or attacks from tribes, coupled with decreased depletion rates of hunger and thirst for example is an excellent way to introduce players unfamiliar with the genre. Three higher difficulty options include predator and tribe threats and add various other stat altering modifiers to ramp up the challenge and provide a more genuine, and obviously difficult, survival experience. By being accessible to casual and experienced survival players Green Hell allows players to enjoy the story at their own pace and comfort levels, enticing players who enjoy it on a lower difficulty the first time to not just re-experience it, but almost play a completely different version of it by adding the more stressful, tense enemy encounters and harsher survival conditions.

The narrative spans several years and to go into much depth would be to enter heavy spoiler territory. What can be said is that a special mushroom is discovered that has the potential to cure diseases with a notable side effect of unleashing a deadly virus. This double-edged sword plot device unfolds in interesting fashion and ultimately delivers a clever story with a pair of endings to unlock, either good or bad. It is well worth replaying Green Hell to experience both and after an initial playthrough, the second can be completed in as little as 3 to 4 hours. 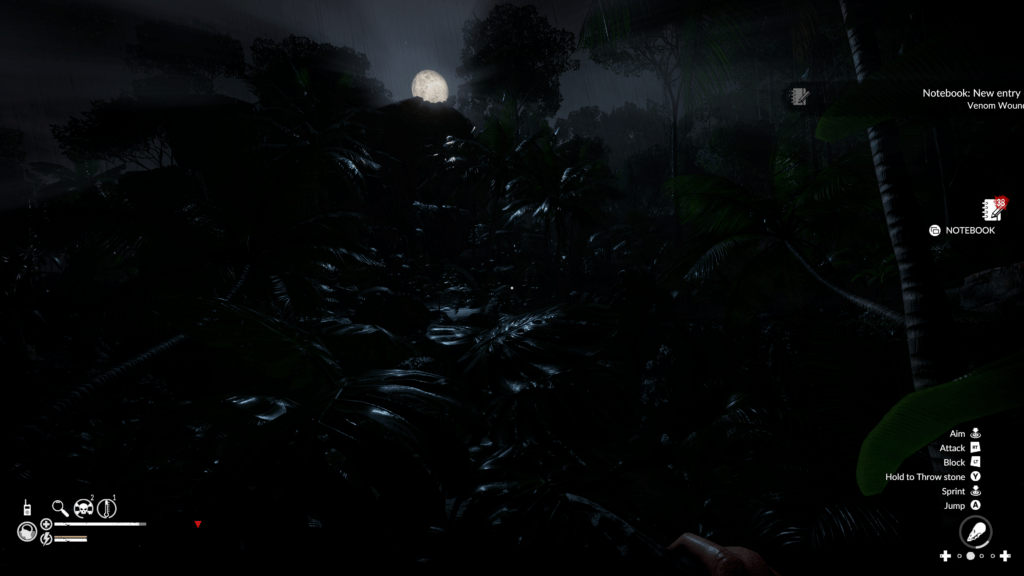 Survival in Green Hell is easier said than done and requires constant awareness of the player’s wellbeing, visually indicated by a watch that tracks health, hunger, thirst and energy. Maintaining these requires an understanding of the vegetation, meat and water available, not just where to find them but how to properly consume them. As new things are discovered they are added to the journal, which can be viewed at any time. Their entries offer insight into what things are, their uses and in some cases any effects that may come with their consumption, either proper or improper. Drinking water for instance is not as simple as going into the nearest stream or puddle. It must be collected and treated in order to be changed from dirty water to clean water. Drinking dirty water may make the player sick, hindering their health replenishment and possibly presenting other side effects such as vomiting. Crafting is an essential component of Green Hell and the variety of tools is impressive. The likes of improvised knives or hatchets made from stone can be used to cut down trees to collect varying sizes of sticks, branches and logs that can be used to craft other tools or even shelters. A number of frame, wall and roof types are available to build from different types of resources that are fun to experiment with. The fun with crafting is exponentially increased when playing co-operatively, with up to four players working together two collect resources and craft things simultaneously, speeding up the process of building either simple or complex home bases with shelters, gardens, resource stacking stations and so much more. The inclusion of co-op is perhaps the greatest addition to this survival experience. The teamwork aspect is a lot of fun with consistent communication and really becomes a new type of experience as a result. 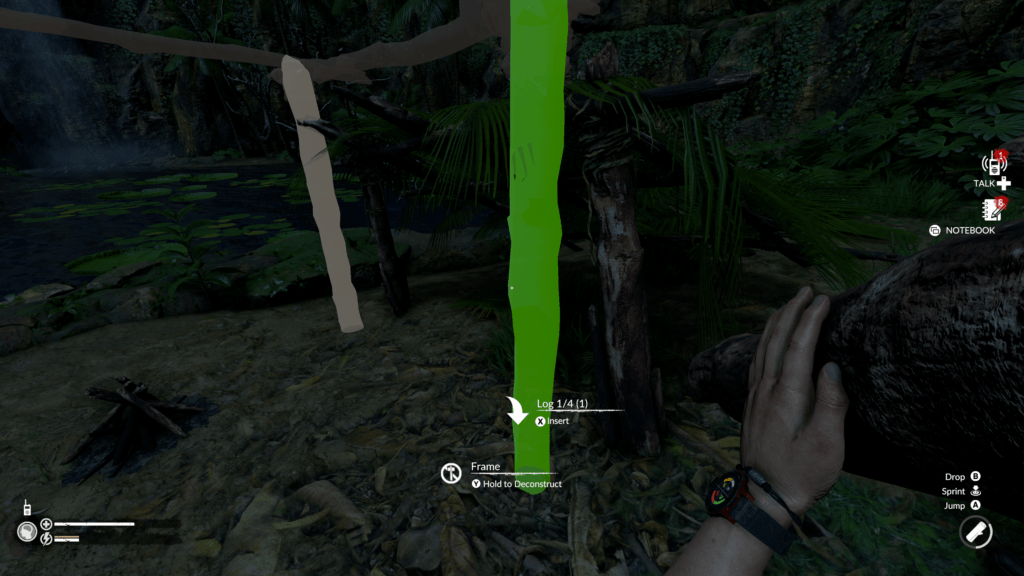 All of the wildlife that roam the forest can be killed and eaten but the roles can just as easily be reversed and the player can be mauled to death by a jaguar or bitten by a rattlesnake, fatal if the poison is not treated. Also roaming the forest are the local tribes. They can be bypassed with stealth but confrontation should be avoided unless weapons such as spears have been crafted as hand-to-hand melee combat is often no match for their crafted weapons. The constant threat and lurking enemies add to the atmospheric tension and excitement but as mentioned earlier, can be turned off altogether by playing on the lowest difficulty to allow players to simply enjoy the story without the pressures of the survival elements. 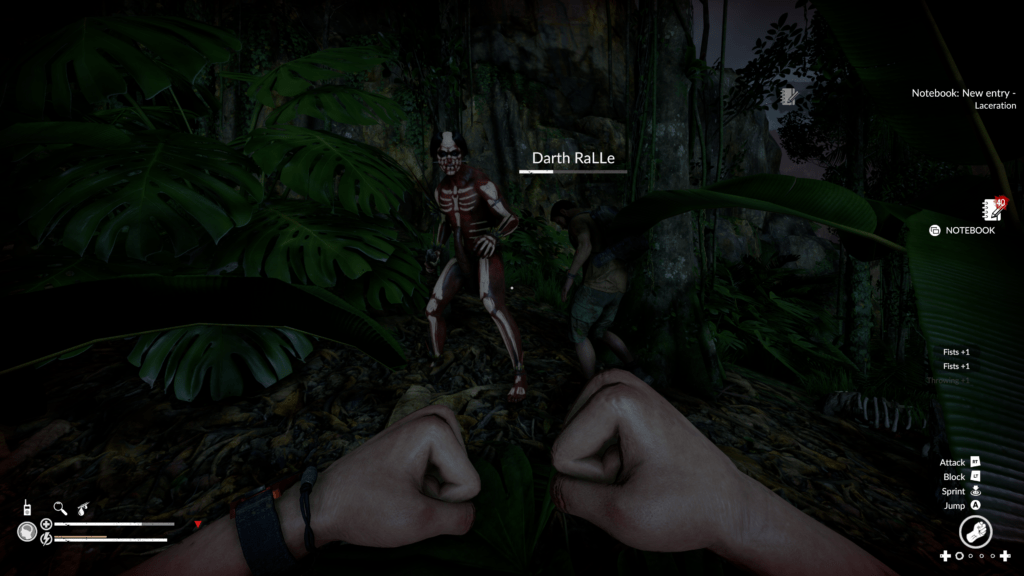 Any injuries sustained from fall damage, insect bites, animal attacks or showdowns with the tribes is cleverly displayed in a body inspection system, with each arm and leg able to be selected and turned – from the player’s perspective, to observe any injuries they may have. This is cool and a fun way to see the damage as opposed to a simple health bar. These injuries may require a type of grass for a bandage or perhaps something may need to be crafted using the animals and vegetation that populate the jungle. Left untreated these injuries will become infected and and various ailments will constantly hinder the player’s movement and stat depletion/replenishment. The visuals in Green Hell are a little inconsistent. While the jungle itself is quite striking, the animations of the predatory animals in particular, as well as the jungle-dwelling tribes-folk leave plenty to be desired with wooden movement and stiff animations that hinder the immersion. The dynamic day-night cycle presents some beautiful views, especially around sunrise and sunset, with flashes of pink and orange cutting a very striking skyline. The constant whizzing of insects, trees blowing and predatory growls keep the jungle feeling alive, exciting and terrifying at the same time. Overall the presentation of Green Hell is as the name suggests, beautiful green paradise in one sense and a hellish prison full of danger in another. Green Hell features an enjoyable story, fun crafting elements and excellent accessibility and co-operative support for players looking to experience it at their own pace and on their own terms. I can’t recommend enough how enjoyable the experience is in co-op and how satisfying it is to see a small camp blossom into a little farm with some teamwork. Genre fans have a fairly familiar experience ahead of them in terms of the core mechanics while casual fans can be introduced to the survival experience with as little or as much pressure as they want. All of the mechanics and features come together in satisfying fashion and the result is a well executed survival experience that doesn’t have to be endured alone.

+ Accessibility for both newcomers and veterans of the genre

– Journal and Inventory are clunky to navigate * A digital code was kindly provided by the Publisher to Game News Aus for the purpose of this review. This review was written as a member of their team *