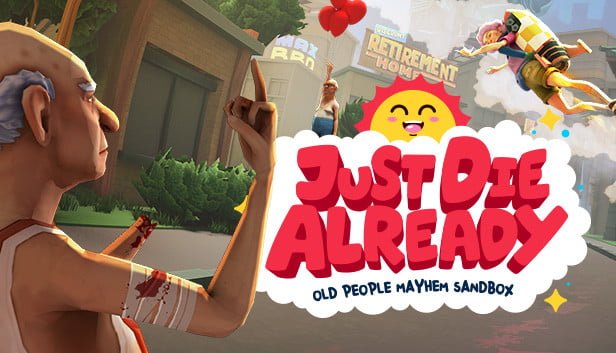 The first I ever heard or saw of Just Die Already was its description in an article and I instantly realised I needed no further information to purchase. Check it out below as it appears on the Microsoft Store:

“Just Die Already is an old people mayhem sandbox game created by the designers of Goat Simulator. You are old and angry and you’ve just been kicked out of your retirement home. How will you survive in a world that wants you to Just Die Already?”

Influence from the team behind Goat Simulator + playing as the elderly in an “old people mayhem sandbox” = day one purchase. It’s crazy, ridiculous and absolutely pointless. None of those comments are negatives in Just Die Already, the absurdity keeps things silly, entertaining and fun.

As I begin writing this review I don’t really know where to start as my mind constantly wanders to one of my earliest moments with Just Die Already. Mere minutes into my first session I walked over to a garbage truck and for no reason at all I was grabbed by a worker, one of my arms and legs in each hand, and launched into the air to land on some power lines, be electrocuted, and fall into the path of a speeding car that removed all of my limbs except for my hips. I think Shakira almost said it best with “my hips don’t lie” though a more accurate quote would be “my hips don’t die”. 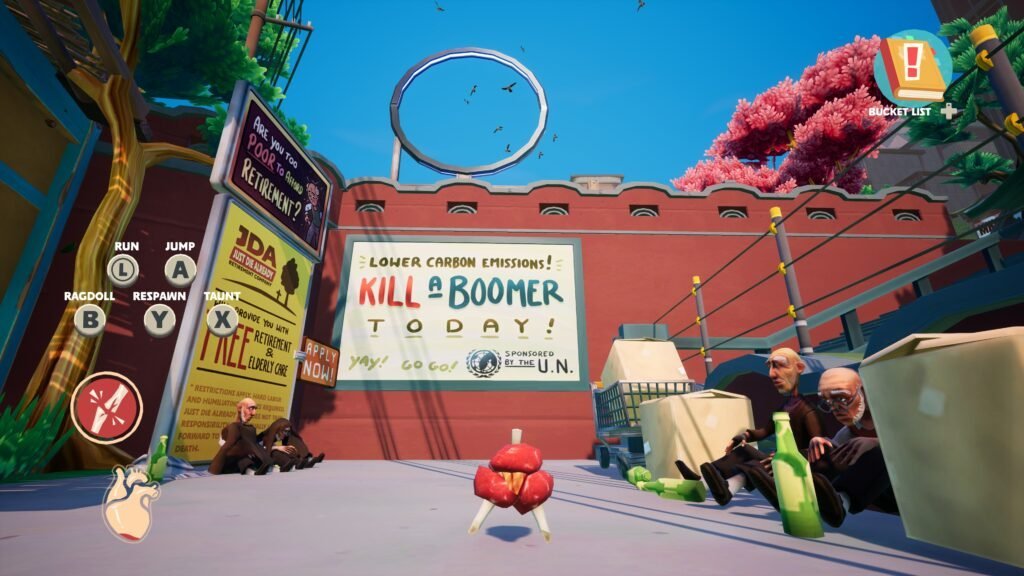 This was my introduction to losing limbs, nonsensical and over the top physics and the world of Just Die Already doing its best to dismember and end your life at every opportunity. The game opens with character selection in a retirement home, offering four equally old and angry “Boomers” to choose from, a choice affording no advantage over the other and merely a cosmetic decision. 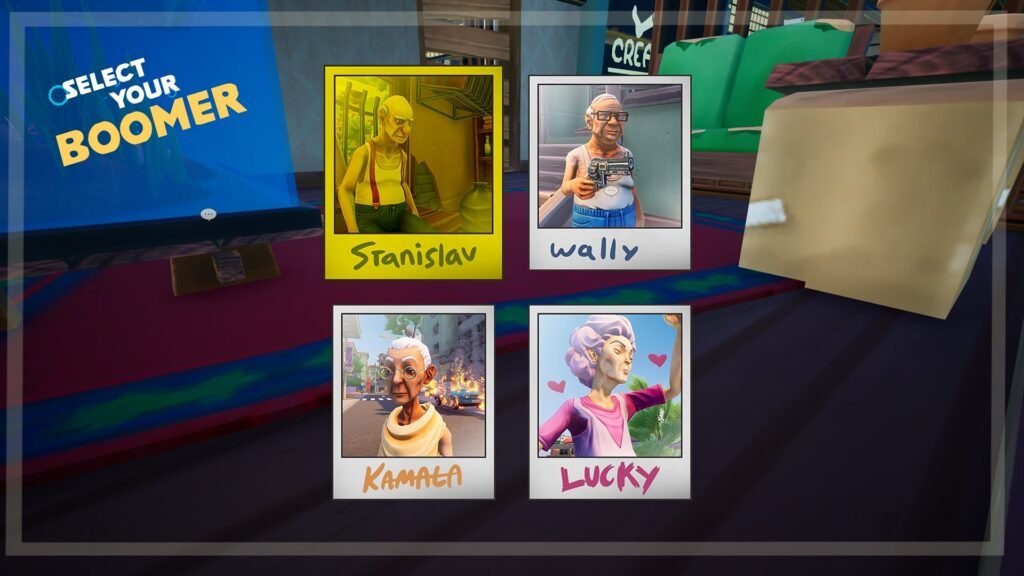 On-screen prompts regularly remind you how to play, using each bumper to grab an item with the corresponding hand, some items can be dual wielded while others will require both hands. It isn’t just objects that can be grabbed, and it’s worth noting that everything that can be interacted with can be used as a weapon, but people, whether they are waking around or having a nap on a bench can be grabbed and dragged into oncoming traffic, thrown onto conveyors or strategically placed in front of trains or into fire for example. 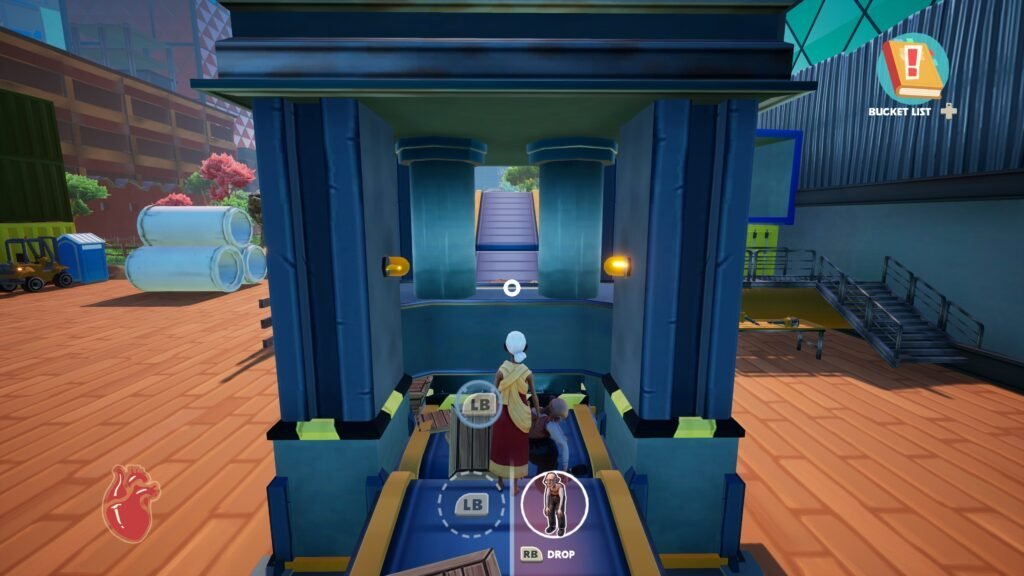 Just Die Already truly is a sandbox of mayhem, presenting a handful of unique locations throughout the city that is densely populated with everyday objects and tools to use as weapons against the world that doesn’t care about you. Anyone can be attacked and eventually killed but so too can the player. The inhabitants aren’t going to take any nonsense from the player and will not hesitate to slap you, throw you or chase you down and hack you into pieces with machetes. How do you take the fight to this kind of aggressor? Easy. You purchase katanas, guns concealed in bananas and so much more from vending machines littered throughout the world by using tokens earned by completing challenges. 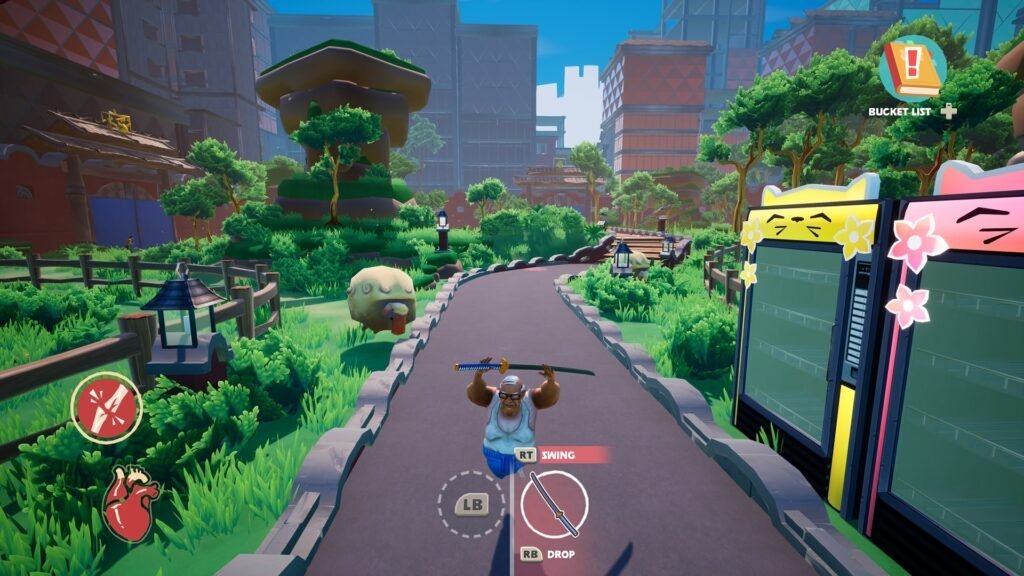 Challenges comprise the equivalent of a story in Just Die Already. With no real narrative as such the player is given someone else’s bucket list at the beginning of the game that is full of diverse tasks for the player to complete. Doing specific things X amount of times, decapitating yourself or dying in specific ways are just a few examples of the ludicrous list. Cleverly, this adds a little bit of structure to the otherwise non-linear carnage and encourages experimentation with particular objects and hazards within the environment. 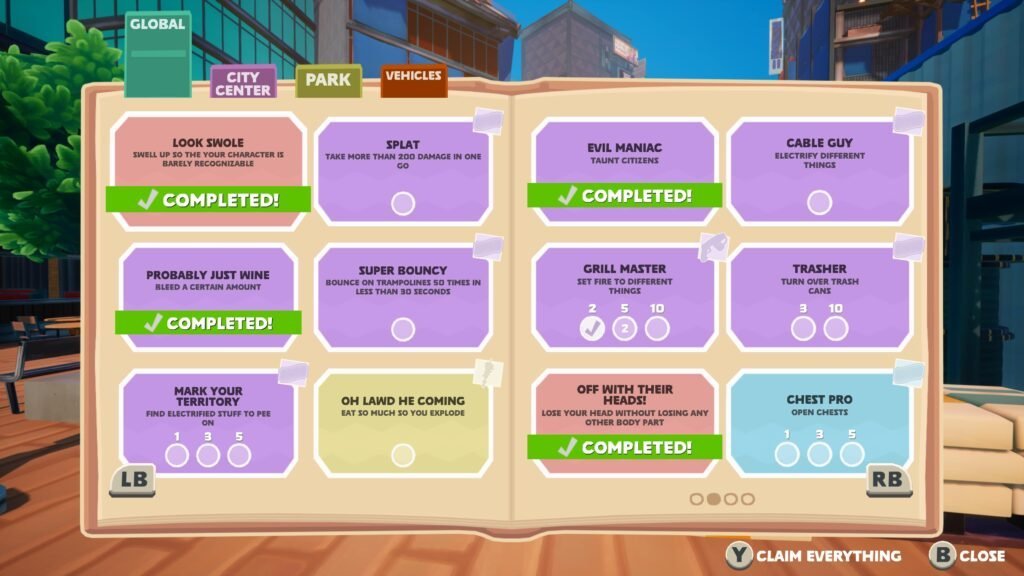 As the player receives damage to certain parts of their body their limbs will break and eventually be severed. Getting hit by a car might break your back, having your character’s torso and head fall backwards and trail behind your feet as you run and jump around. Lose an arm? Not a problem, you’ve still got one left and the one you’ve just lost is as good a weapon as any right? Getting around with no legs is amusing, losing both  arms and your head also isn’t a dealbreaker as you’re still able to bounce around the environment. Without arms nothing can be interacted with however so in most cases you’ll either want to hit the respawn button, which will respawn you in the nearby skip bin of course, or find a way to get yourself killed. There is no consequence for death and you have unlimited lives. 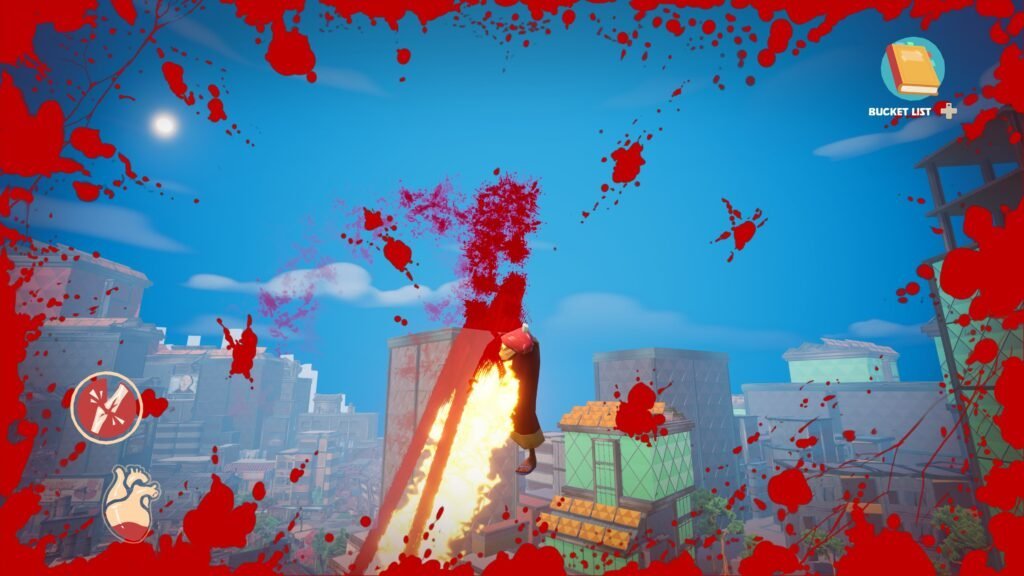 There is no actual purpose in Just Die Already outside of the Bucket List but there’s nothing wrong with just running amock and laying waste to passers by for no reason either. The crazy physics and limb dismemberment systems are fun and silly enough to keep a goal-less session enjoyably bloody and oddly satisfying. Playing with up to three other people in online co-op is where it becomes something else entirely. Four players working together within the confines of the ridiculous gameplay provides some genuine laugh out loud moments for like-minded players who enjoy switching the brain off for a guilty pleasure such as this. 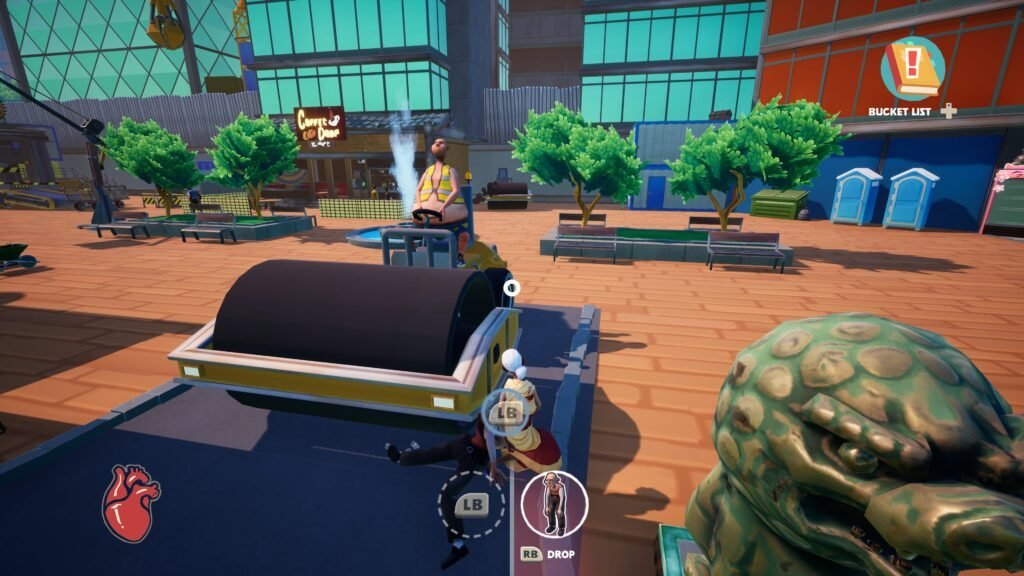 Cartoony visuals keep the tone playful and light despite the blood soaked carnage and chaos of decapitation and un-necessary violence against the elderly. The animations are often hilarious, especially as limbs are lost and interaction with environmental hazards such as power lines and fire come into play. The sound design is appropriately silly and over the top. Just Die Already is the definition of a game that doesn’t take itself seriously, a point not possibly clearer than the complete lack of you having to actually do anything. Do whatever you want, however you want to whoever you want. It’s a simple concept backed by absurd premise that is weirdly addicting. 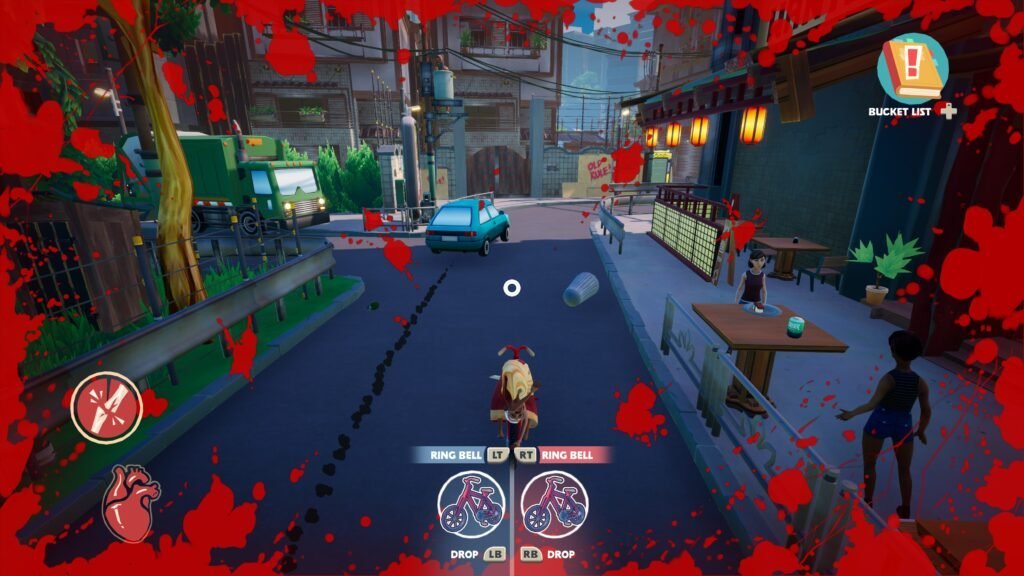 I enjoyed my time with Just Die Already. There’s something to be said for the freedom it offers, the satisfying yet rare feeling of being able to kick back and relax without any pressure of pushing the story forward. Exploration uncovers new areas of the map which brings with it new tools and new ways to senselessly kill or be killed. Just Die Already can make you smile, laugh and find yourself bewildered by the absence of the actual laws of physics as your limbs litter the pavement around you. It’s plain dumb fun and that’s something we don’t see enough of nowadays. 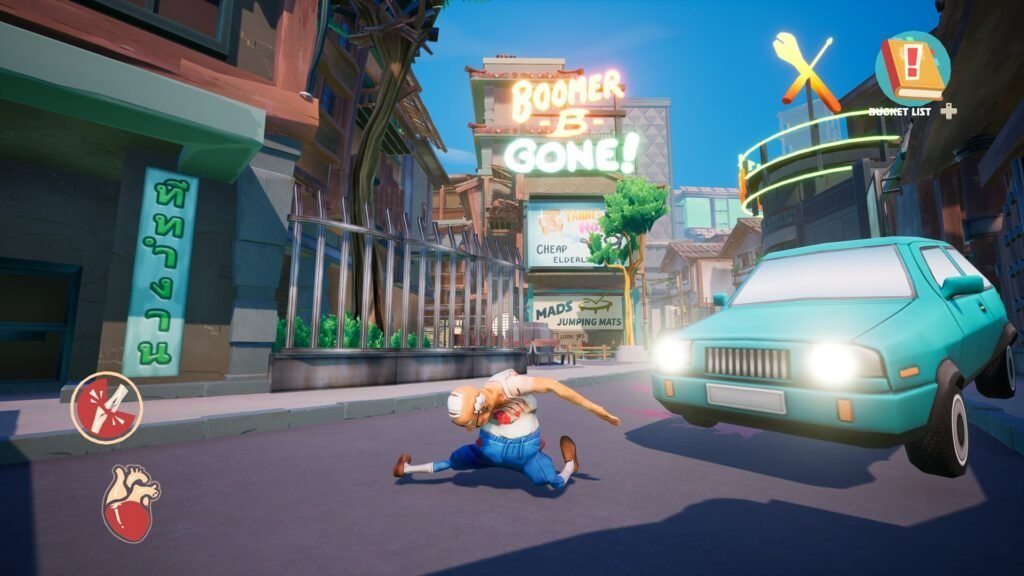 + Ways to kill or be killed

+ Doesn’t take itself seriously in any way, shape or form

+ Co-op can be very amusing

– A little more purpose would be nice