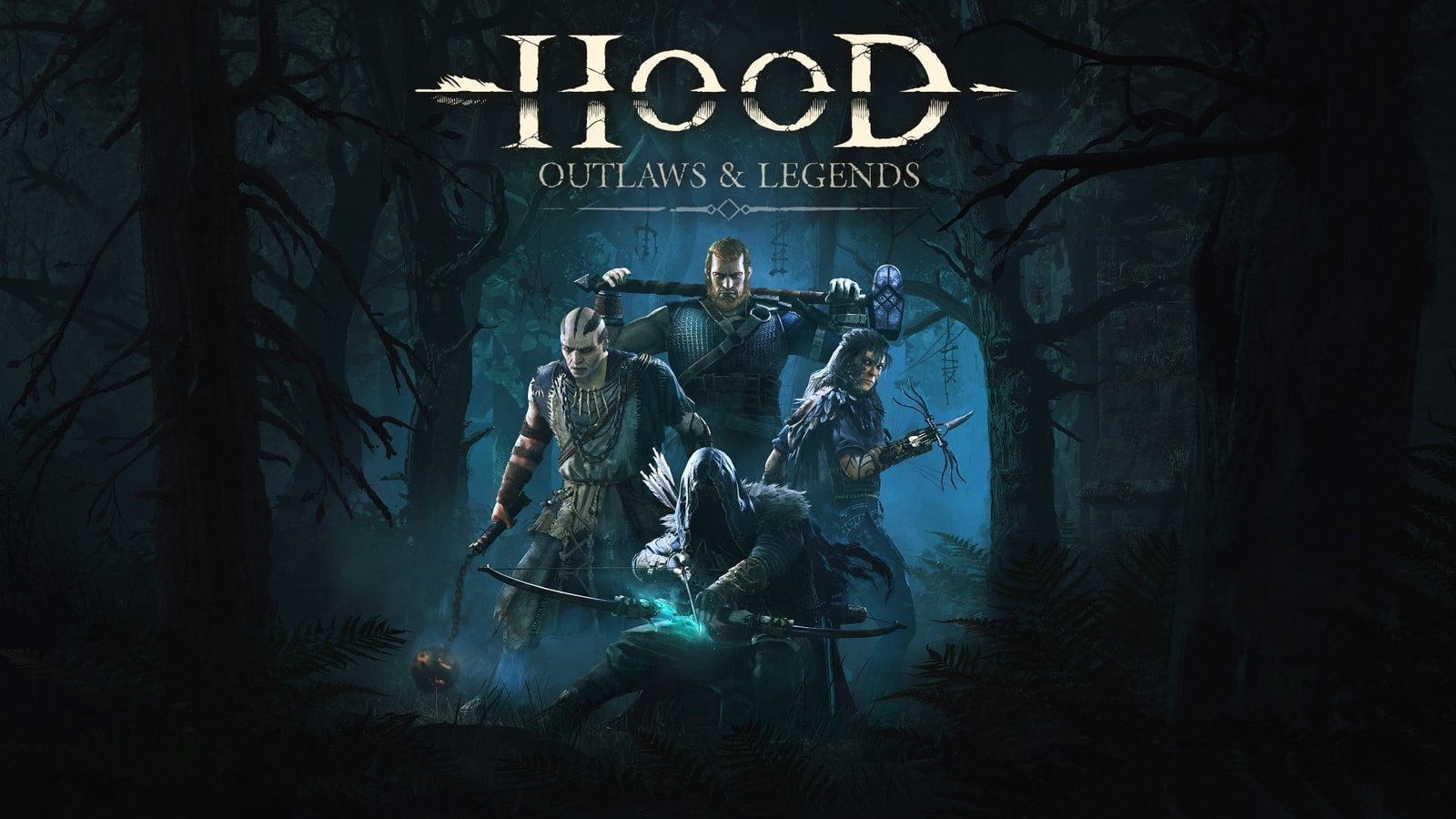 Hood: Outlaws & Legends is a multiplayer-only PvPvE (Players vs Players vs Environment) action-stealth experience, pitting two teams of four players against each other as well as the AI enemy State Guards that patrol and defend the area. The objective is simple. Find the Sheriff and pickpocket his key, locate and open the vault, transport and extract the chest from the vault.

At any moment the player and team in possession of the key, carrying the chest or extracting it can be killed by the opposing player team or AI enemies, allowing the enemy team an opportunity to capitalise on the work of the other team. Combining stealth and action to complete the match, referred to as a Heist, requires teamwork and co-ordination as well as mastery of the four available characters and their respective classes to succeed. All are outlaws but some will become legends.

First and foremost it is important to reiterate that Hood: Outlaws & Legends is a multiplayer-exclusive experience, meaning it can only be played with a full team consisting of three other players and a full enemy team of four players. With this noted, at the time of writing (17 days after the official launch, intentionally held off for a few weeks to allow for updates) the matchmaking has improved since launch though the system itself is still with its flaws. Lengthy wait times still persist despite cross-play support which should in theory increase the pool of players to draw from to populate a Heist.

Unfortunately the waiting times can still be several minutes, in my experience waiting upwards of five minutes is a regular occurrence. When a full lobby finally eventuates there are further matchmaking issues in the form of level matching. There is no separation of high level players from lower level or new players, immediately creating uneven Heists where players who have been present since launch have a greater advantage due to their higher level characters, upgrades and perks. The absence of some sort of level grouping makes Heists difficult for new players. 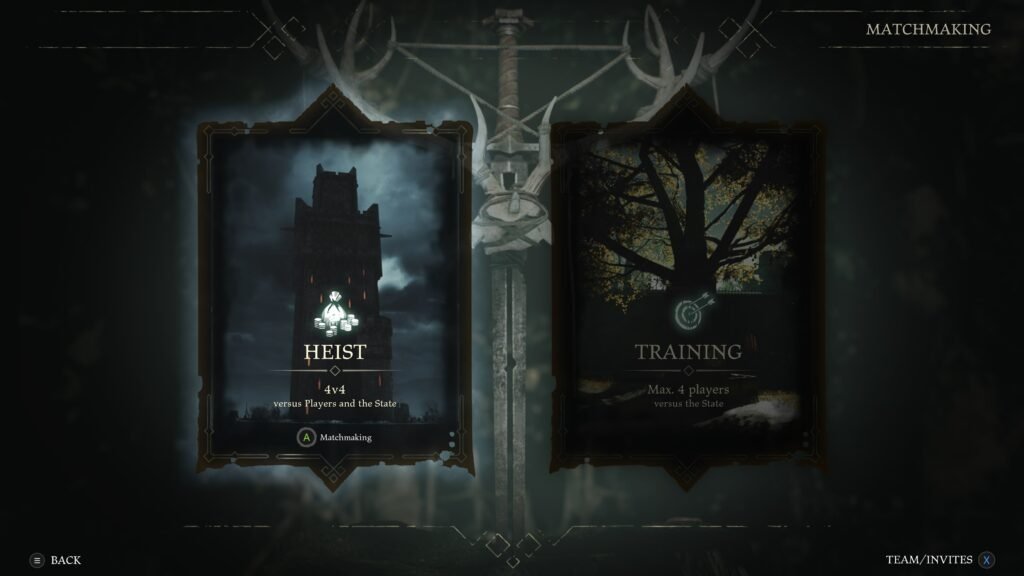 Also absent is an AI squad-fill type system that allows for bots to comprise teams when matchmaking is proving difficult or even as an alternative for players who wish to experience Hood without the difficulty and pressures of multiplayer Heists. The inclusion of bot Heists would allow players to better familiarise themselves with each of the four characters and their abilities as well as offering a training ground to gain experience and be able to more competently hold their own in the unbalanced matchmaking system.

With the matchmaking and lack of bot support addressed, those issues alone comprise my only negative comments on Hood as the gameplay is genuinely fun, engaging and challenging, the latter is welcome with the exception of high level experienced players making life difficult for new players. 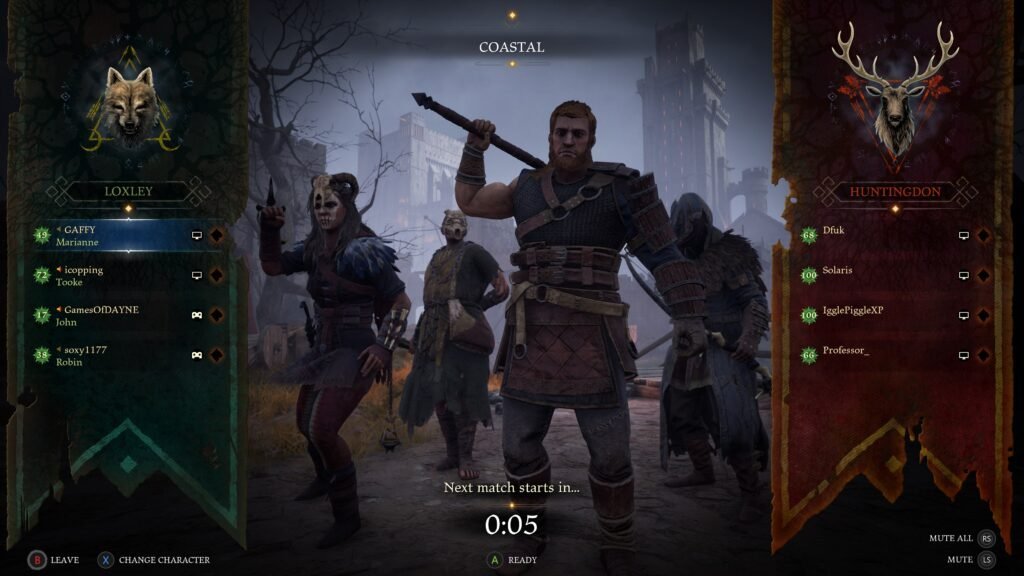 The Sheriff roams around the map, typically in an isolated area with AI guards nearby. Employing stealth tactics such as crouching and using the environment for cover, such as hiding behind objects or in the grass, to sneak up and pickpocket the key while avoiding detection from him, surrounding AI and the enemy team. Detection from the Sheriff will trigger him to pursue the player, which results in instantaneous death should he get his hands on a player, as well as alerting the nearby guards which will put the area into High Alert and into lockdown, closing any portcullises in the process and drawing the attention of other guards. The closure of portcullises will require the players to scale ladders, climb stairs or ropes or simply outrun their pursuers and break line of sight to escape being chased. 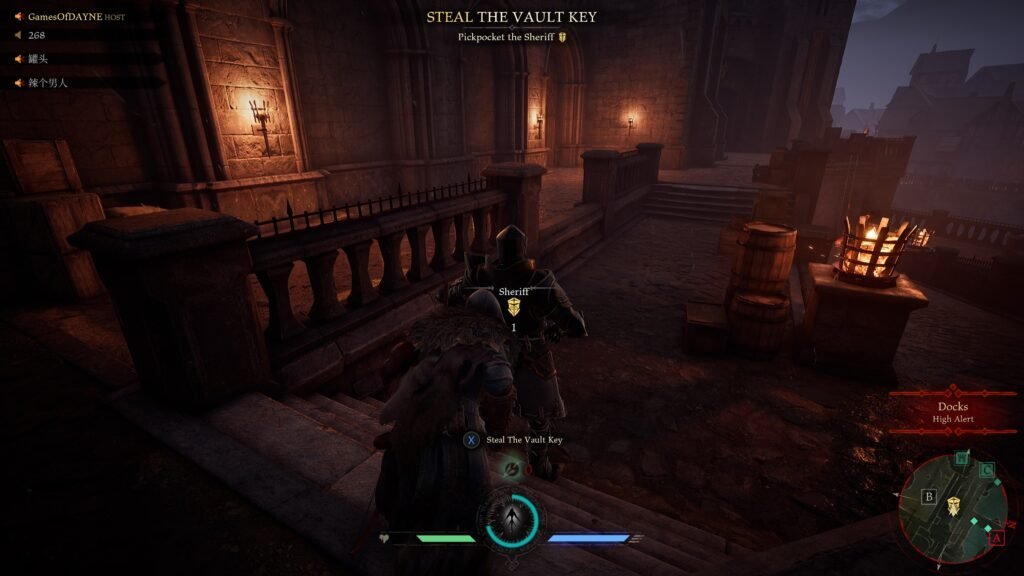 While in possession of the key a vault must then be found, opened, entered and the chest within it claimed. With the chest in hand a number of extraction points appear on screen, indicating how far away each of them are. The player carrying the chest moves extremely slowly and must be well guarded by their team in order to reach extraction safely all while keeping an eye on AI soldiers, the Sheriff and of course the opposing team. 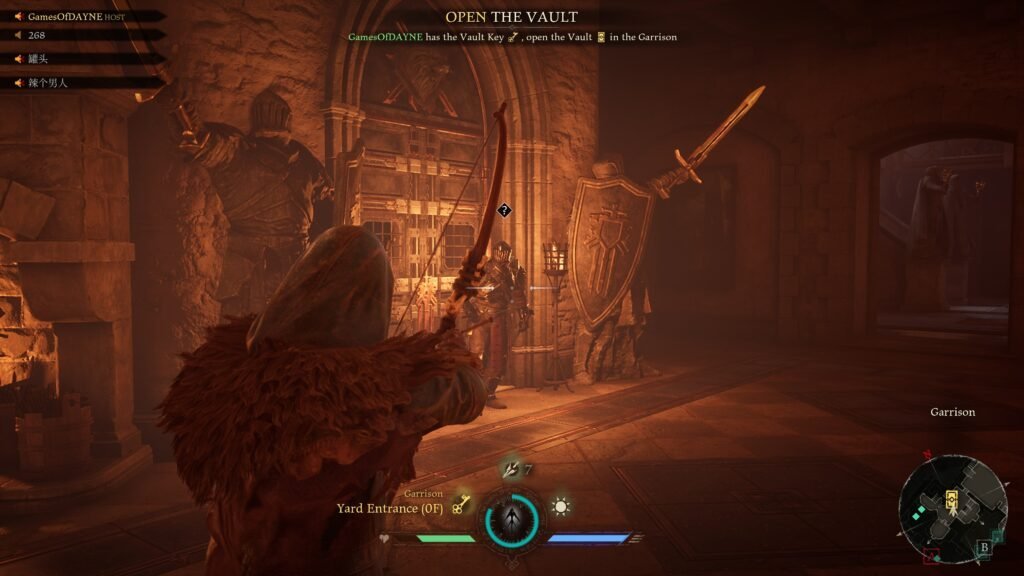 The chest can be dropped in order to attack enemies at any time but doing so is risky as it makes it even easier for the enemy team to steal it without having to kill another player in order to do so. Reaching the extraction and placing the chest onto a winch system will initiate the endgame of a Heist. 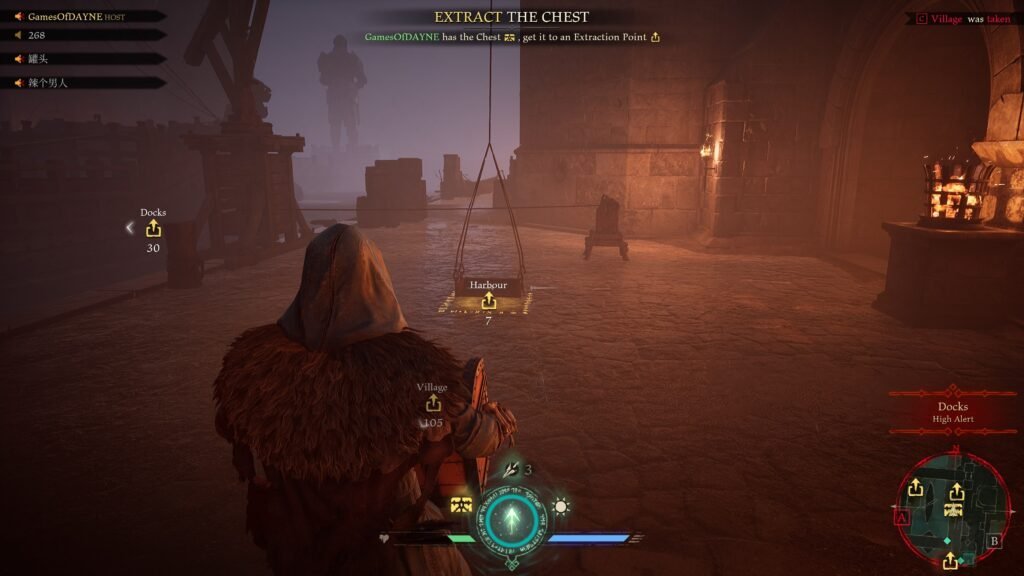 A crank can be interacted with by one or two players to trigger the winch and begin to lift the chest, with two players doing so faster and the Melee class of characters bringing additional speed to the process. This brings up a notch display at the top of the screen, with all 7 notches having to be reached one at a time by staying at the wheel. At any moment players can be interrupted and killed by their enemies, allowing the opposing team to swoop in, continue the extraction from the most recent notch and potentially steal the win. This sequence is tense, thrilling, dramatic and incredibly rewarding when successful while devastating to lose control in the final moments and subsequently lose the Heist. 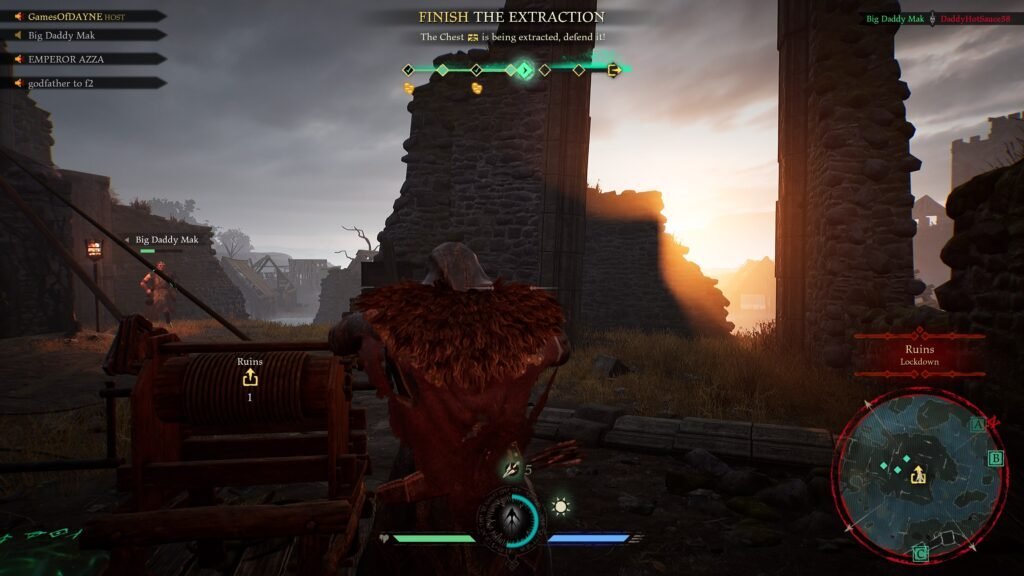 There are three capture points spread across the map, capturing these will turn them into respawn locations upon death. These are never more critical than when the chest comes into play when either team has extracted it from the vault. Paying attention to which capture points are in your team’s possession is essential to being able to control the battlefield during the chest extraction phase, reducing the travel distance upon death to return to the extraction point and interrupt or fend off the opposing team. 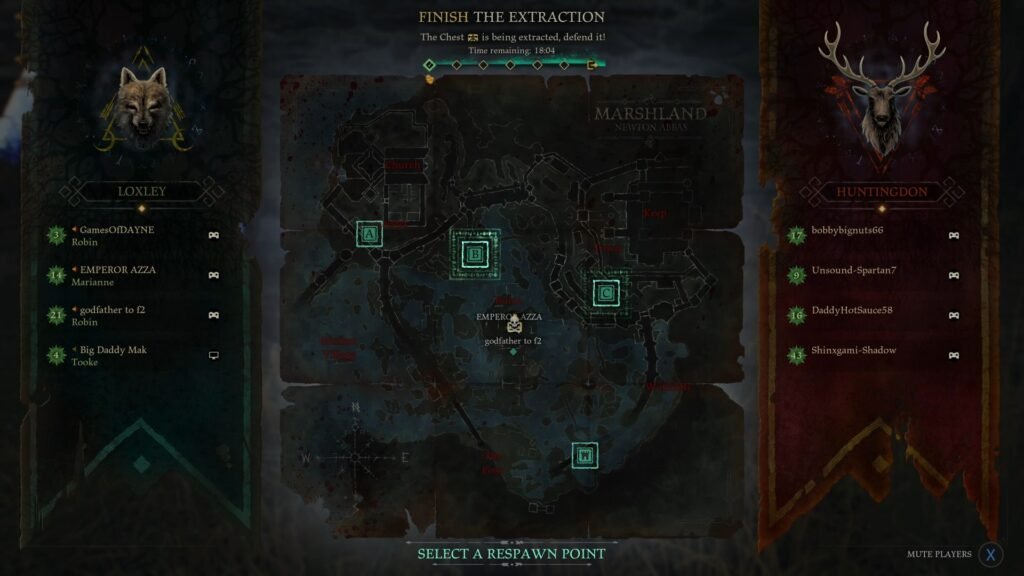 Completing Heists will award experience towards the player’s overall Player level as well as the individual character used for the Heist. There are four characters to choose from that each have their own unique weapons and abilities: 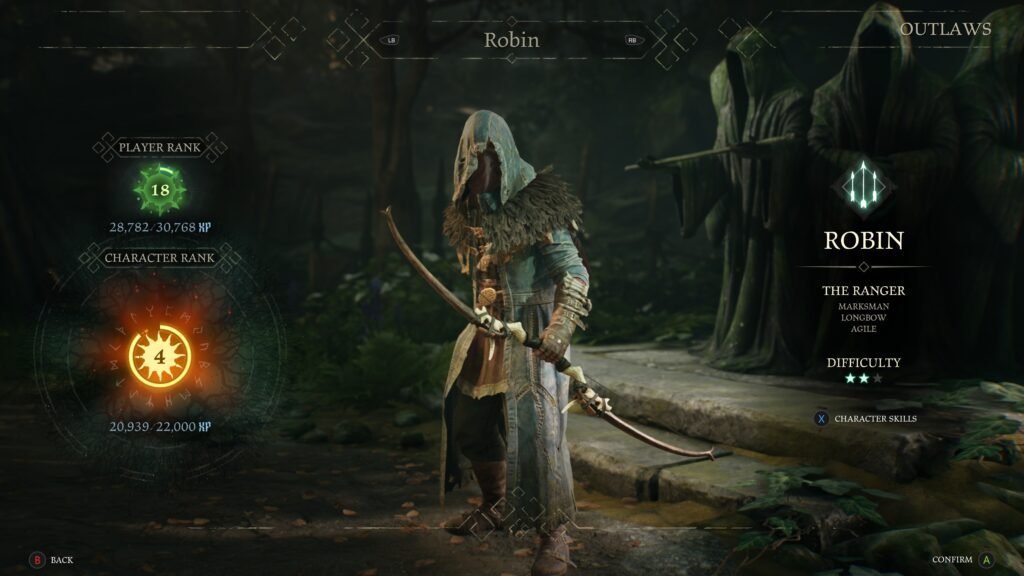 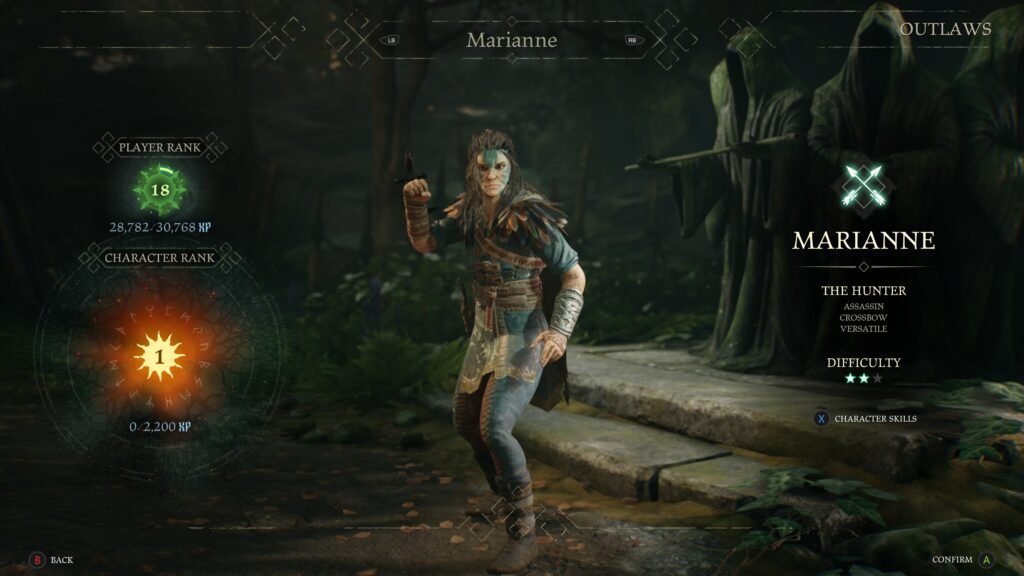 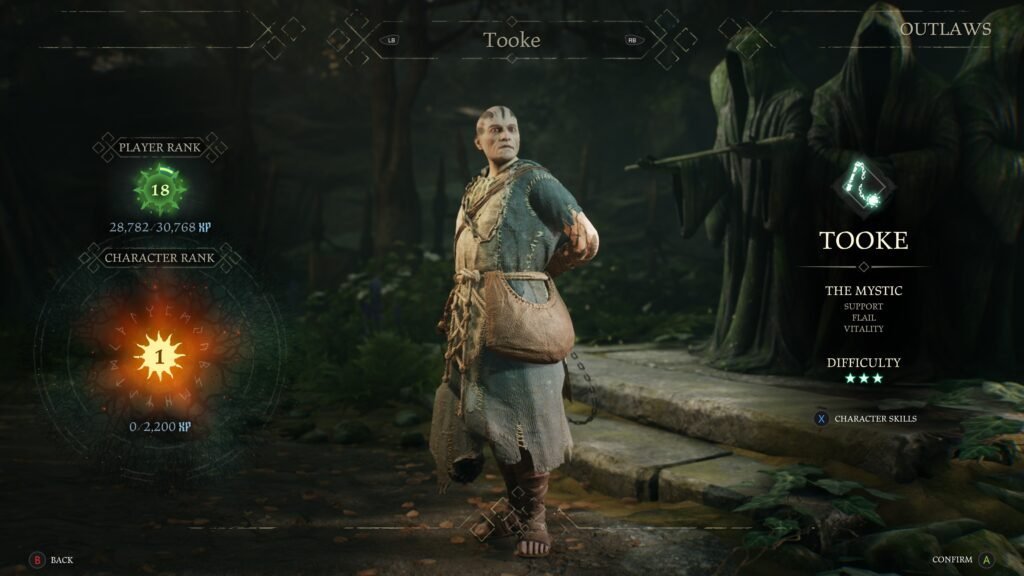 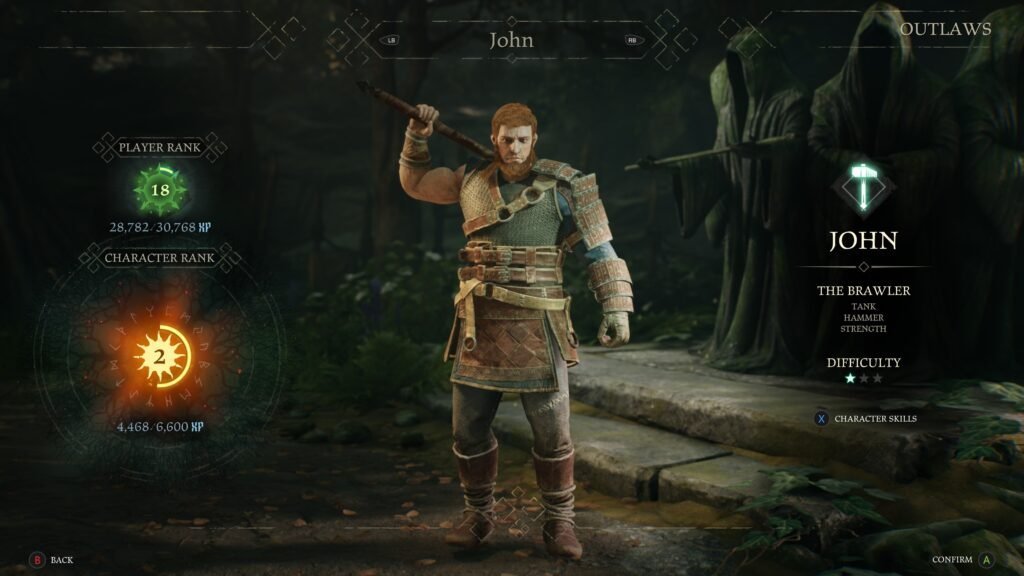 Understanding the Traits, Ability and Gear of each character is essential to survival and success during Heists. Each character brings a lot to the table which is fun to experiment with and to alternate the play styles each are suited to. John/The Brawler is definitely the most powerful and easily the greatest threat and as there is no character limit in teams it is possible for a full team of four John’s to lay waste to everyone in sight, a disturbingly regular occurrence in my experience which all but eliminates any hope of success for the opposing team. 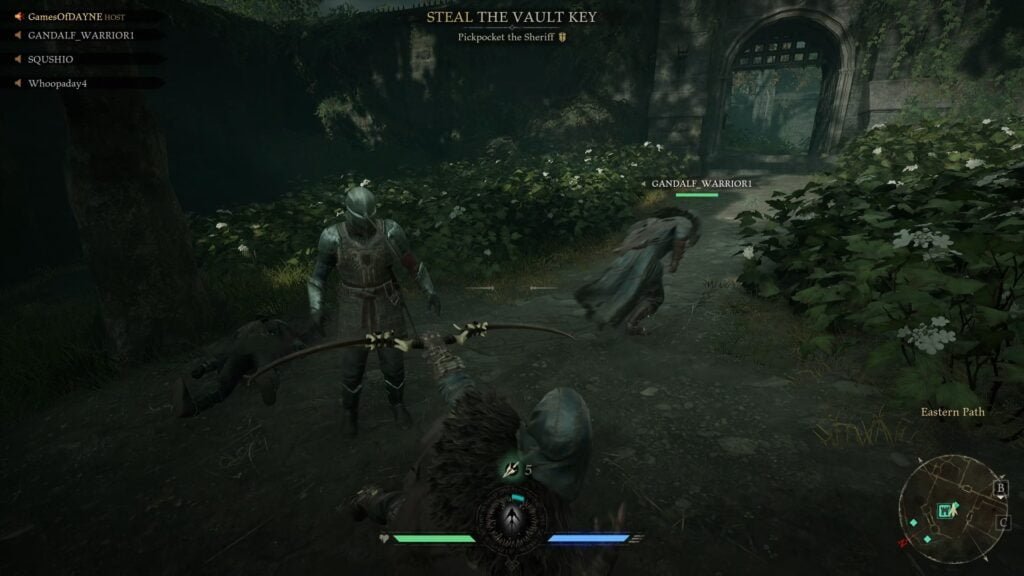 Any player enemy or State Guard can be assassinated if approached from behind and pressing the displayed button prompt. The only exception to this is the Sheriff, he is immune to assassination and even death, instead he can be beaten until his health bar depletes and will entered a stunned state for what appears to be a random length of time. I have seen him down for mere seconds and other times for well over a minute. Stealth is heavily recommended and encouraged in Hood but there is nothing wrong with going in loud, hammers and bows blazing and facing the consequences of such a noisy approach. It’s riskier but it’s also a lot of fun.

As enemies are defeated, players and State Guards alike, the ability meter will charge and when full the player is able to use their special ability before having to replenish the meter for further use. The meter however does not progress while the area is in lockdown/High Alert after detection until that area is cleared or escaped. State Guards will investigate sounds and can be distracted by throwing stones in a particular direction or whistling to garner their attention. 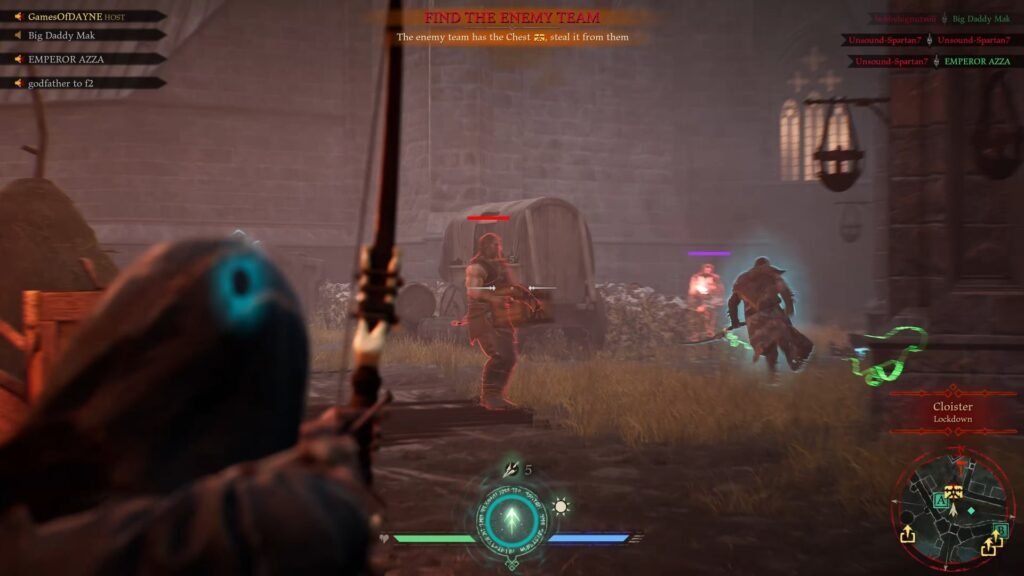 The combat is simple yet fun and engaging. Melee characters John and Tooke have light and heavy attacks while Robin and Marianne have light and ranged attacks. Throwing the gear, abilities and assassinations into the equation results in a small but effective pool of offensive capabilities. Enemy attacks can be blocked, which consumes stamina – as does sprinting and attacking, but can also be parried, opening a brief window for a follow-up attack to be unleashed. 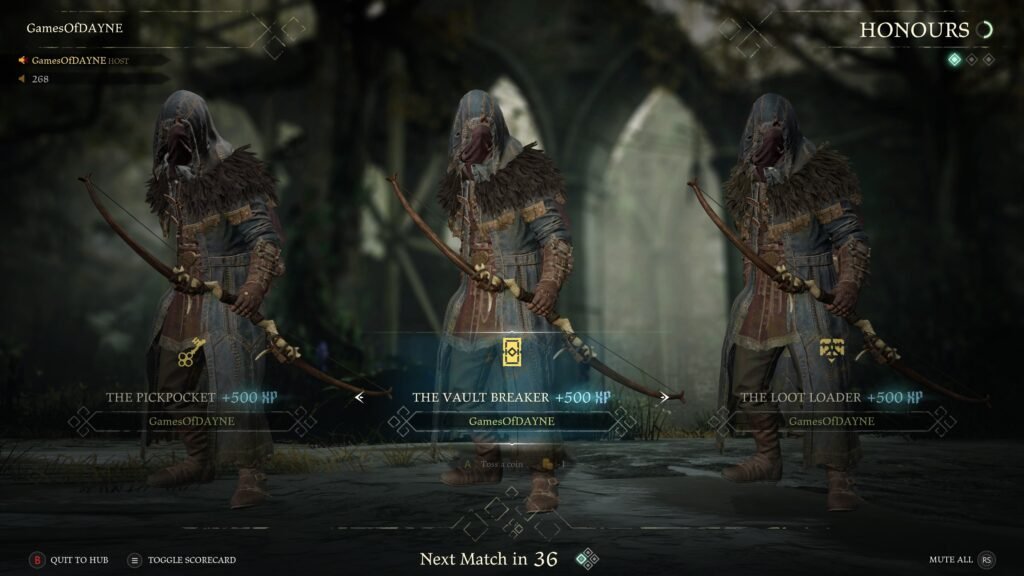 Completion of Heists, as well as loot collected throughout and from completing objectives, awards each player Gold. This Gold is distributed by the player at the end of each game on Scales of Justice. One side goes to the player’s pocket while the other goes to the Hideout with distribution being up to the discretion of the player. 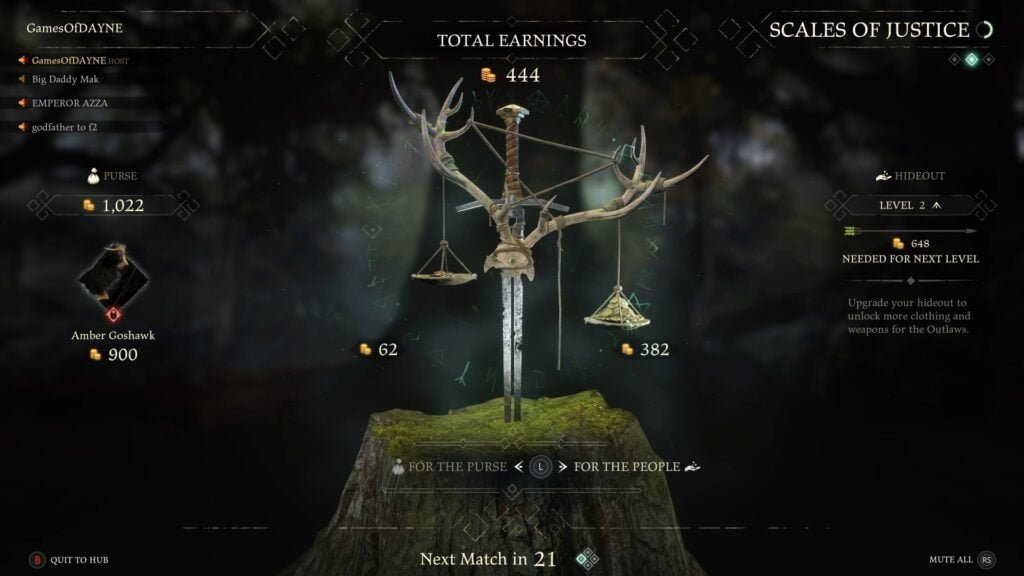 By pocketing the Gold it becomes available to spend in the Hideout which acts as the hub-world between Heists. It can be spent on unique character perks that offer stat increases or buffs, skins and alternate weapon cosmetics for each character, all of which are hidden behind characters reaching specific levels, the Hideout being a specific level or the completion challenges. Distributing Gold to the Hideout allows more resources to flow in which in turn increases the player’s Hideout Level. A higher Hideout level opens up additional unlocks for skins as mentioned. Challenges can be initiated within the Hideout that task the player with getting X amount of kills or stealing the key for example and awards them experience. 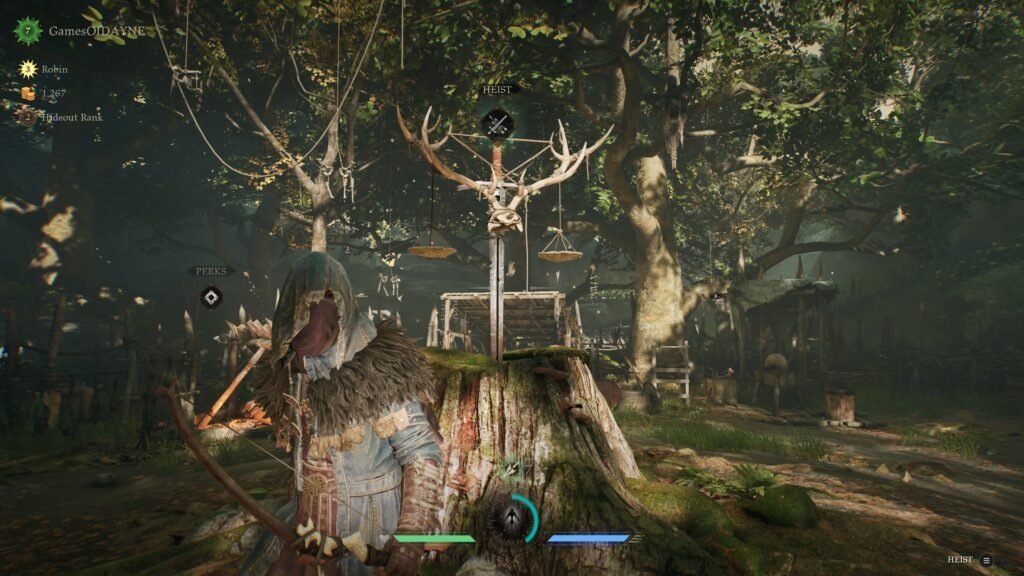 Visually Hood: Outlaws & Legends looks amazing. The environmental detail is stunning and the character models are impressive. Crisp sound design and an epic score keep the tensions as high as the stakes and pressure of completing a Heist while combatting both enemy forces who seek to oppose and stop you. 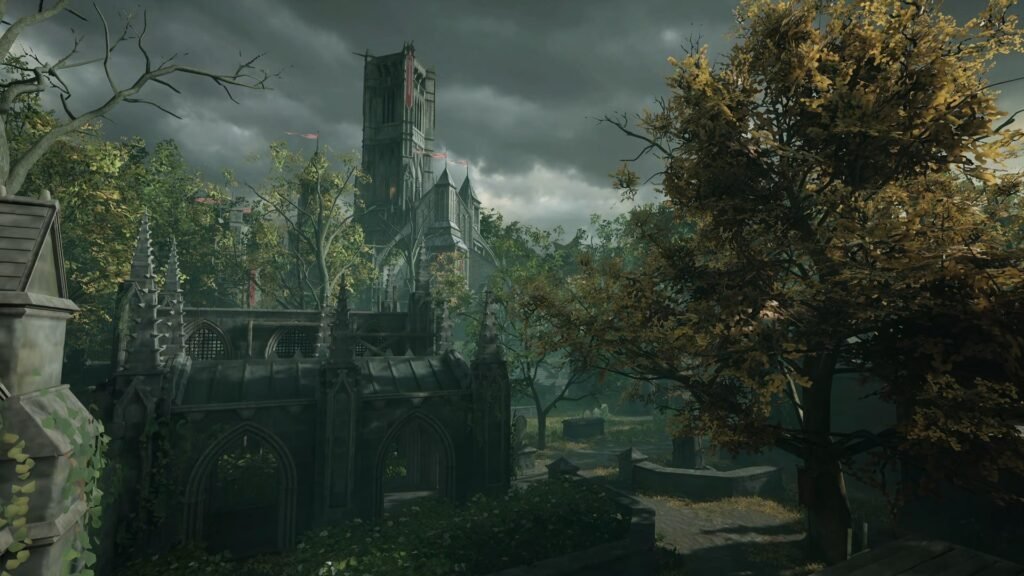 Hood: Outlaws & Legends is an incredibly enjoyable stealth-action experience bogged down only by poor matchmaking times and the inability to play with bots. As this title was always intended and discussed as a multiplayer only experience it may be considered unfair to discuss the lack of solo play or bot support but these features would broaden the appeal to players and allow for a more casual and balanced alternative to the frantic, inconsistent and unfair matchmaking that is exclusively on offer. 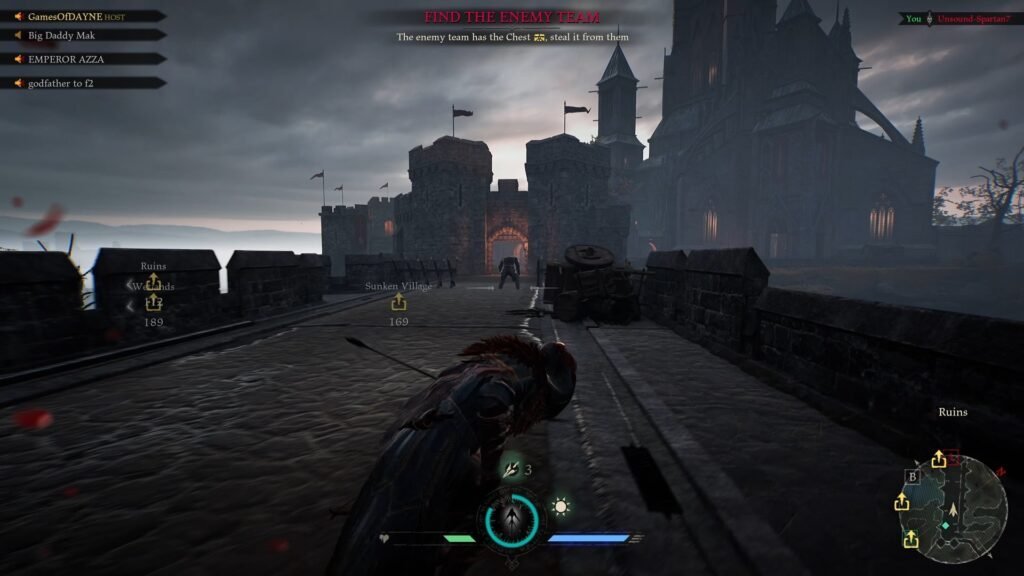 Each character feels genuinely unique and fun to play as with the simple but accessible and engaging gameplay and combat. It feels reminiscent of the latest iterations of Assassin’s Creed, blending stealth and outright violence in the tug of war between the two teams and the State Guards that don’t discriminate against their targets. Heists are tense, thrilling and full of drama, especially in the final moments and for this reason alone it is possible to overlook the “nice to haves” in regards to better matchmaking and enjoy the game in its current state.