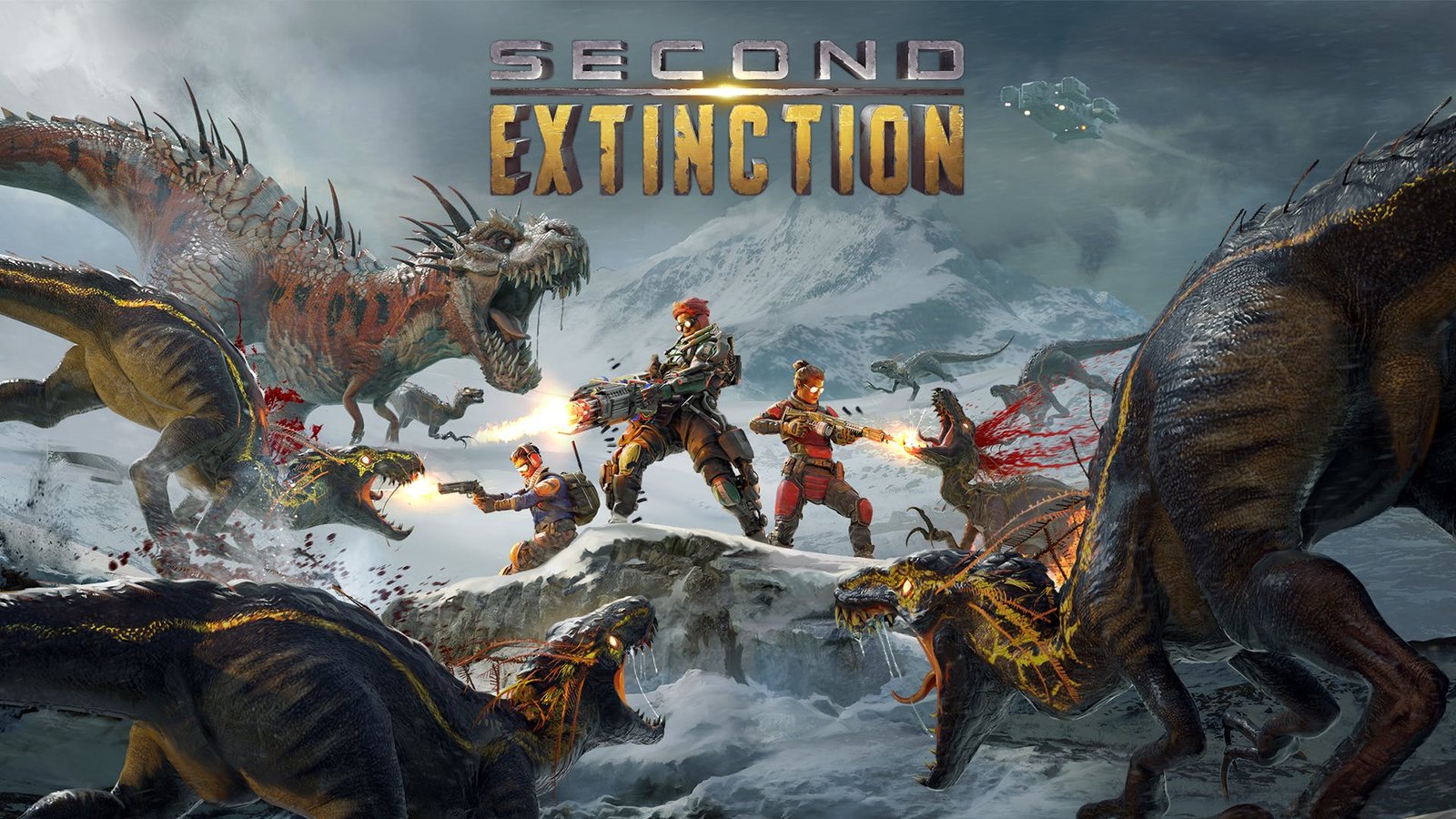 A world ruled by hordes of mutated dinosaurs and a unit of one to three players tasked with stopping them from bringing upon the end of humanity is the premise of Second Extinction. With an arsenal of unlockable and customisable weapons and gear to put the dinos down and optional objectives to complete in either Campaign or Free Roam, Second Extinction allows players to do as much or as little as they want on one of three difficulties before attempting to survive never-ending waves as they prepare for extraction in this first person dino-shooter. Second Extinction is currently in the Game Preview program.

Second Extinction offers a six mission campaign taking place in various parts of the fully explorable map, each taking as little as 10-20 minutes to complete on Normal or Hard and around 30 minutes on Insane if playing with at least one other player. Tackling the campaign alone can easily add another 5-10 mins on the lower pair of difficulties while Insane can take around 45 at most solo.

There are five playable characters to choose from, each with unique passive, tactical and special abilities that are worth exploring before deciding who best matches your play style. They lack depth on a character level and what little personality they have is restricted to some pretty cringe worthy dialogue more often than not. 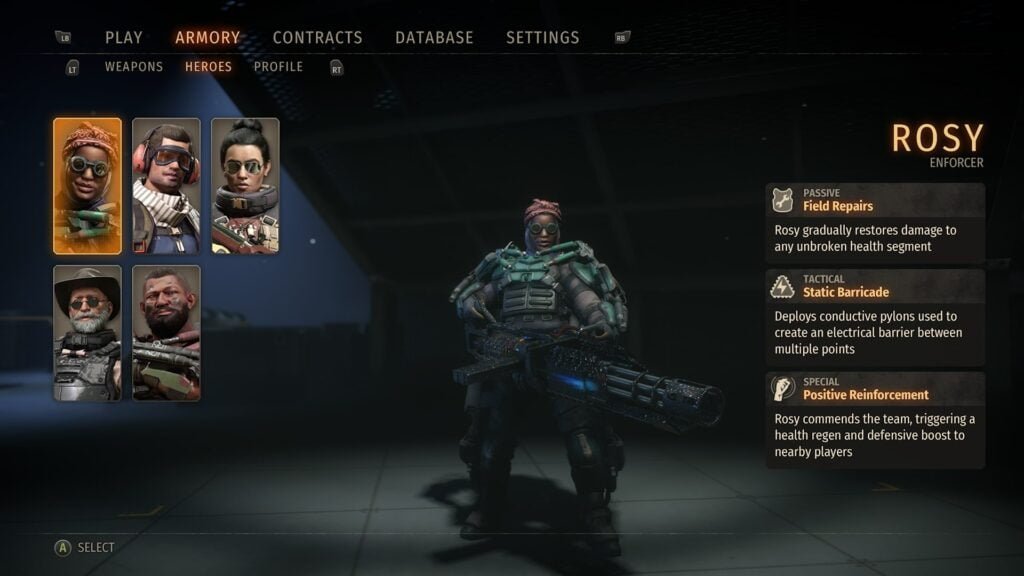 There is very little in the way of an actual narrative, instead the missions are structured around completing a handful of objectives and extracting. Optional objectives are in abundance for those looking to extend their massacre of the prehistoric threat. The objective variety is light and wears thin pretty early unfortunately, including the likes of calling in a payload of carriers to extract eggs or servers, boosters to apply to supply containers to send back to the ship, explosives to destroy things and traps to capture raptors. Activating camps that can be used as respawn deployment areas and destroying drones to uncover more objectives on the map pretty much comprise the optional objective list. 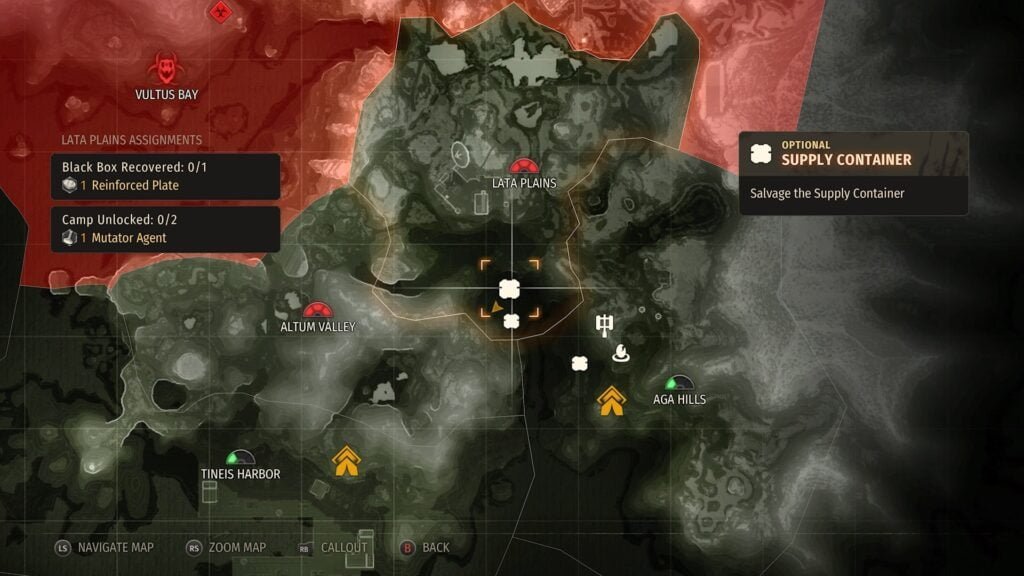 Completing a mission requires the player/s to reach one of many extraction points, activate it and hold it down for a varying amount of time until the dropship arrives. Once the ship lands, all members of the team must board it in order to extract. Extraction is the only way to keep the loot gained throughout the mission or free roam expedition. 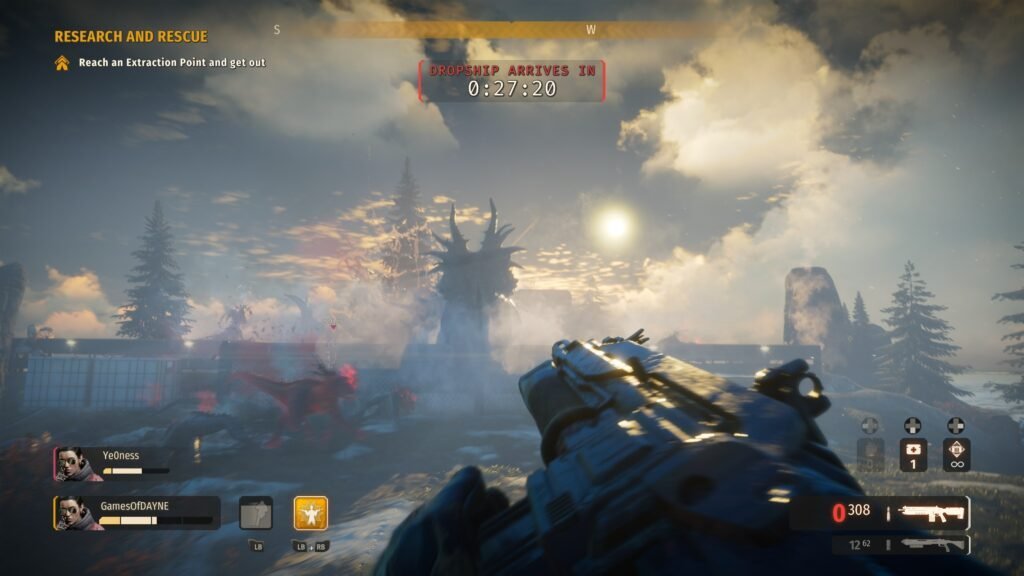 To maximise the rewards and possibility of obtaining the rare resources required for certain weapon upgrades, these extraction points are ideal for dragging out and slaying hundreds or thousands of dinosaurs instead of jumping on the dropship. Farming the extraction on Insane for upwards of 30 minutes is incredibly rewarding on the resource and experience front and despite the endless waves of enemies, with the right loadout and utilising the unlimited supply of ammo pickups, it’s easy to survive and leave when you’re ready or if things are getting a little too hectic.

Just as uninspired is the small variety of dinosaurs to eliminate, with only 4 unique dinosaur types with a handful of variations that can spit acid and shoot electricity for instance. There are seven variants of raptors, two types of Styracosaurus, known in-game as Bulls and two types of the Ankylosaurus, referred to in-game as Flatbacks accompany the Tyrannosaurus Rex for a total of twelve enemy types. The Flatbacks are the only enemies that don’t take damage directly due to their armour, instead they have an exposed weak spot on their belly that must be exploited in order to knock them on their side and fully expose it.

Even playing on the Insane difficulty, solo or with a team, the T-Rex even doesn’t pose much of a threat as their weak spot is on their throat, making them incredibly easy to dispose of. The lack of challenge present against this array of enemies is disappointing and the fear of defeat is all but non-existent. This results in Second Extinction feeling too easy and therefore unrewarding. As this title is in Game Preview it’s easy to see how Second Extinction can grow in terms of new enemy types, mission variety and hopefully new areas to explore. 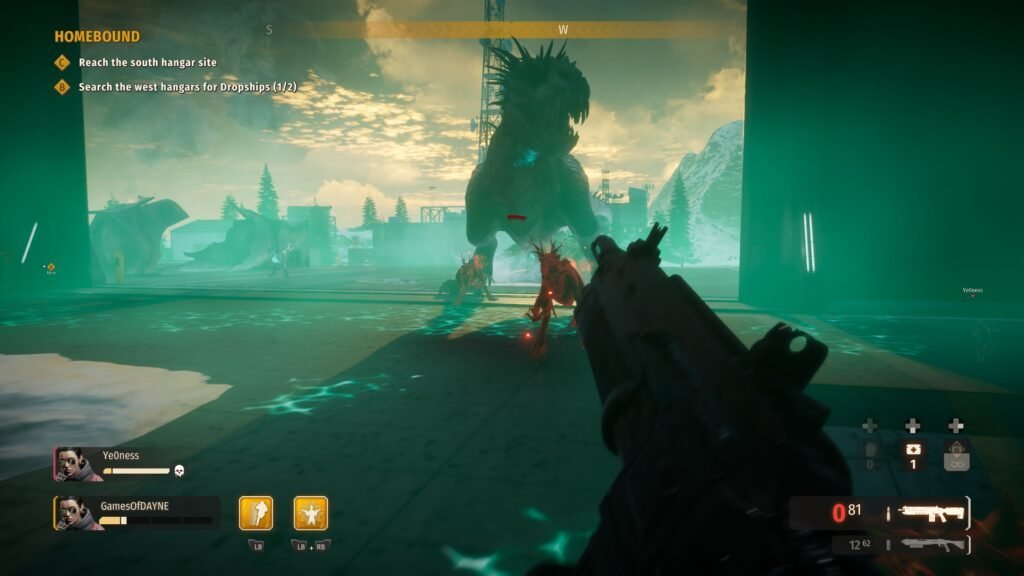 Eliminating certain enemies and destroying things in the environment often drop resources that can be used to upgrade weapons. The weapon variety is shallow initially but new weapons are unlocked with player progression, offering the likes of a shotgun, grenade launcher, rocket launcher, carbine rifle and machine gun. Completing Contracts is another way to unlock resources and requires the player to reach Level 5 before being able to access them. 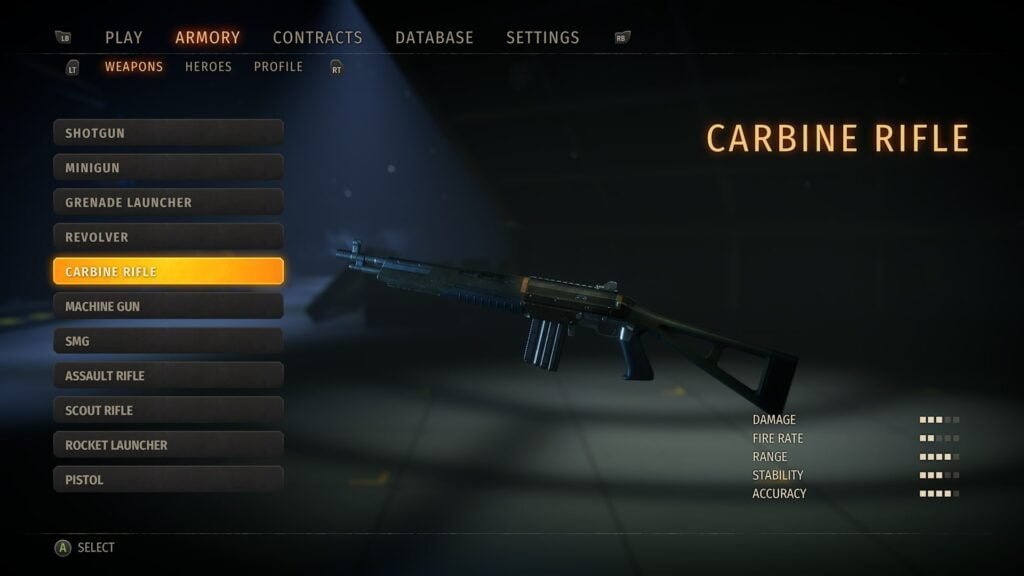 This takes just over an hour to reach and upon doing so three Contracts can be accepted at once, tasking the player with a challenge such as kill X amount of enemies without reloading with each weapon type, kill X amount of enemies that are stunned or complete a particular optional objective. Most Contracts have three tiers, upon completing the first the next unlocks. These are all incredibly simple and essentially the same but require different weapons or different dinosaurs to be killed.’ 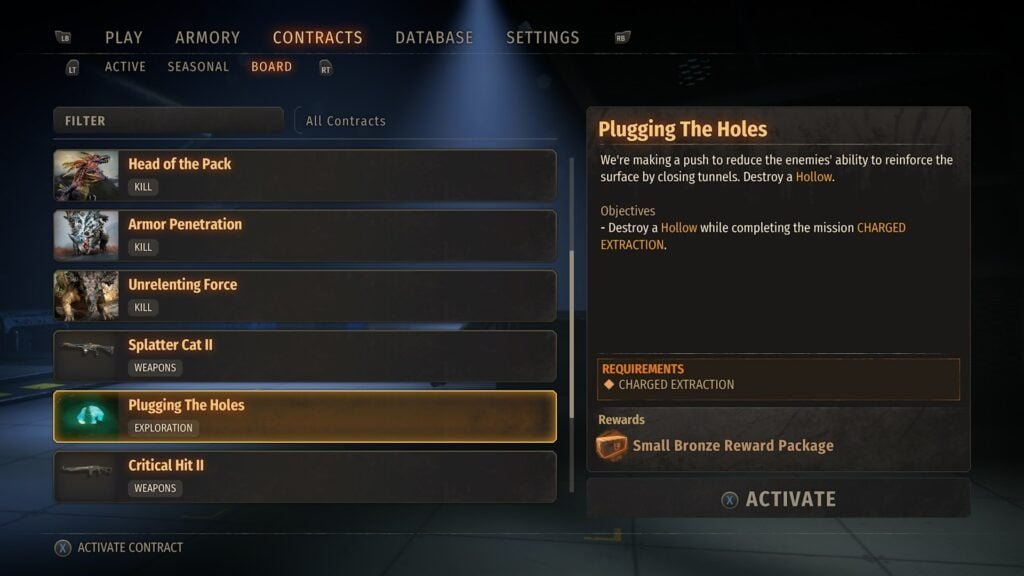 Each of the seven regions of the map have a threat level indicator that is either low, medium or high. Depending on the severity of the threat the dinosaur presence may be lesser or greater, camps to claim may or may not be occupied by dinosaurs and insertion or extraction points may not be available until they are repaired. Regions with high threat levels also have Emergence Events which seem so far limited to Overmutation, an area that contains large eggs that need to be destroyed that is occupied by a large amount of raptors. Presumably more variety will come over time but for now this is the only one I’ve come across in my experience. 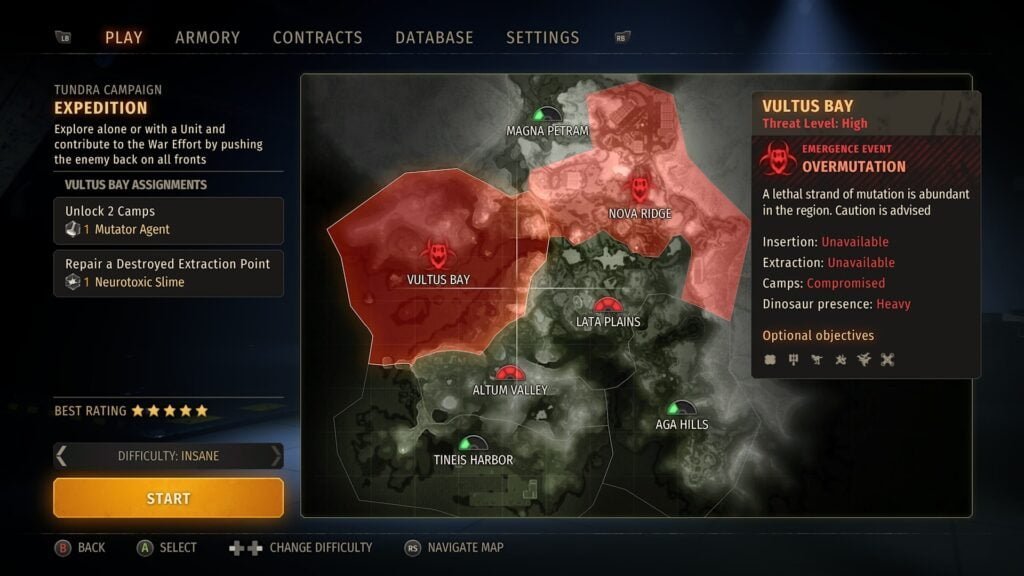 Second Extinction is visually competent. The environment looks decent and the enemy designs are cool and interesting. The score is dramatic at the right times and the sound effects are satisfying, especially the roar of a T-Rex. 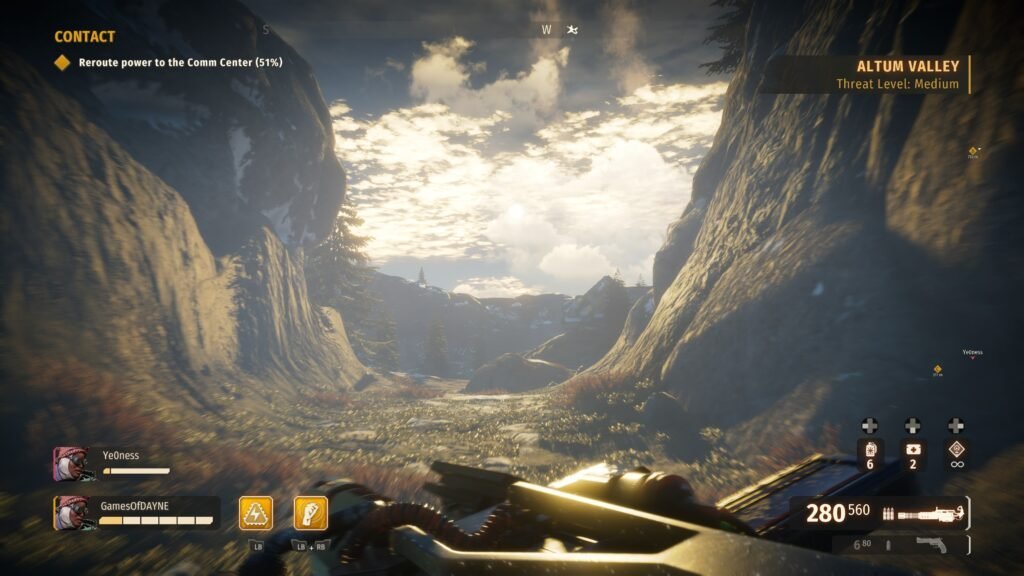 Second Extinction is pretty rough around the edges in terms of its gameplay, mission variety and enemy diversity but because it’s still in Game Preview there is plenty of room for it to grow and adapt to player feedback. Disconnection, problems inviting or joining friends were regular occurrences in my experience but none more so than the alarming amount of times myself or my teammate crashed to the Xbox dashboard. This was extremely frequent, demotivating and sucked any semblance of joy out of the experience. Connectivity issues aside, there is certainly some fun to be had for friends that enjoy mindlessly slaying dinosaurs in a very Left 4 Dead type format. Players looking for a little more substance will be left jurassically disappointed. 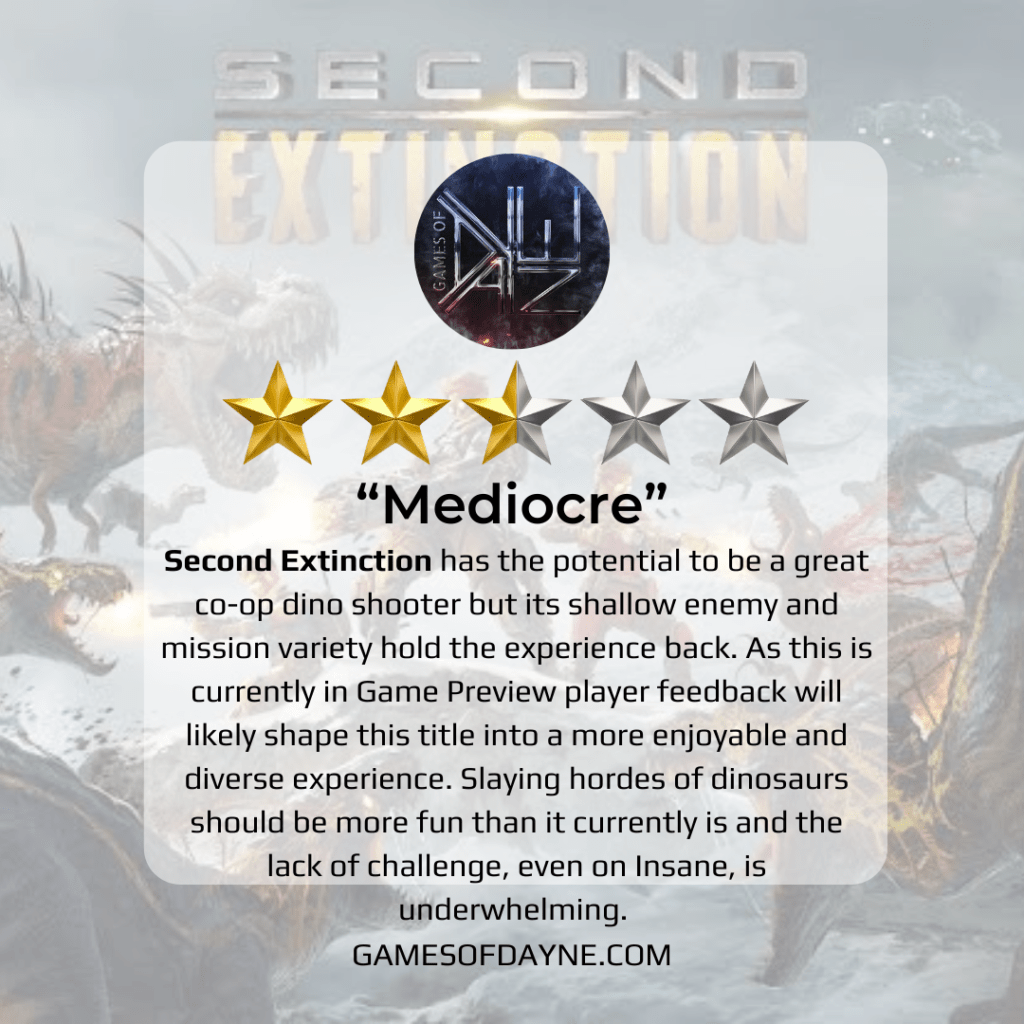 All digital photography was captured in-game on Xbox Series X by Games of DAYNE.