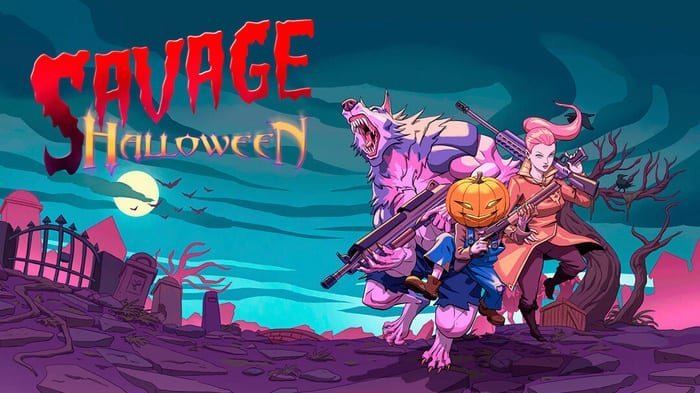 It may not be October but Savage Halloween is here to provide an appropriately themed retro platforming shoot ’em up! Offering three characters to play as, each with a unique special ability, Savage Halloween challenges players with six worlds that each contain six levels and culminate with a boss battle.

James the Pumpkin King, Lulu the werewolf and Dominika the vampire are ready for action in this experience that will certainly test the skill and patience of the player.

Savage Halloween opens with a brief text based sequence that humorously suggests the playable monsters are tired of partying and want to take over the world. This premise is essentially the only storytelling that takes place for the chaos ahead. Following their introduction and the player’s selection of which character to play as, as well as whether to play solo or with a friend, the levels are in theory as simple as getting from A to B. That is however a lot easier said than done. Despite being able to choose between a Normal and Hard difficulty, the former is particularly challenging in its own right. Each level is littered with environmental hazards and enemies that are hell-bent on ruining the player’s day. Patrolling enemies will attack on sight with guns and projectiles that encourage the player to stay mobile. 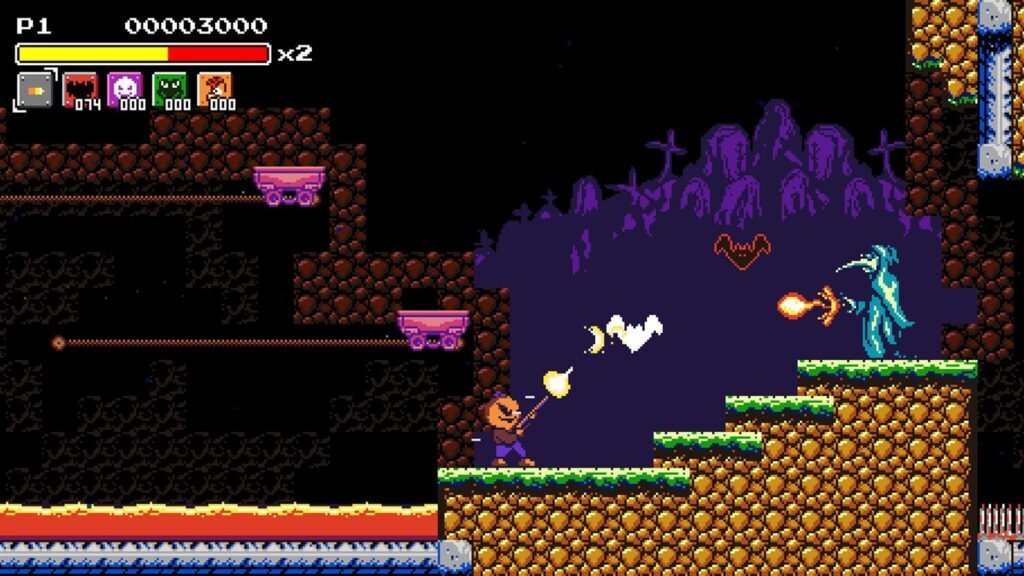 Mobility is an issue in particular when playing co-operatively. For some reason if one player manages to fall behind and be off-screen they die, consuming a life. Savage Halloween uses a life system like the good old days of classic games in the genre. Initially given three lives, with more sparingly scattered throughout the levels, the loss of all results in a game over screen. Here the player is able to use a Continue or quit. Continues afford a fresh set of three lives and when all Continues are used, it is truly game over, and the world must be started from the beginning – regardless of which of the six levels you were up to prior. This off-screen rule is a nightmare in the alternate level types mentioned below and depending on the skill of your partner, could make success borderline impossible. 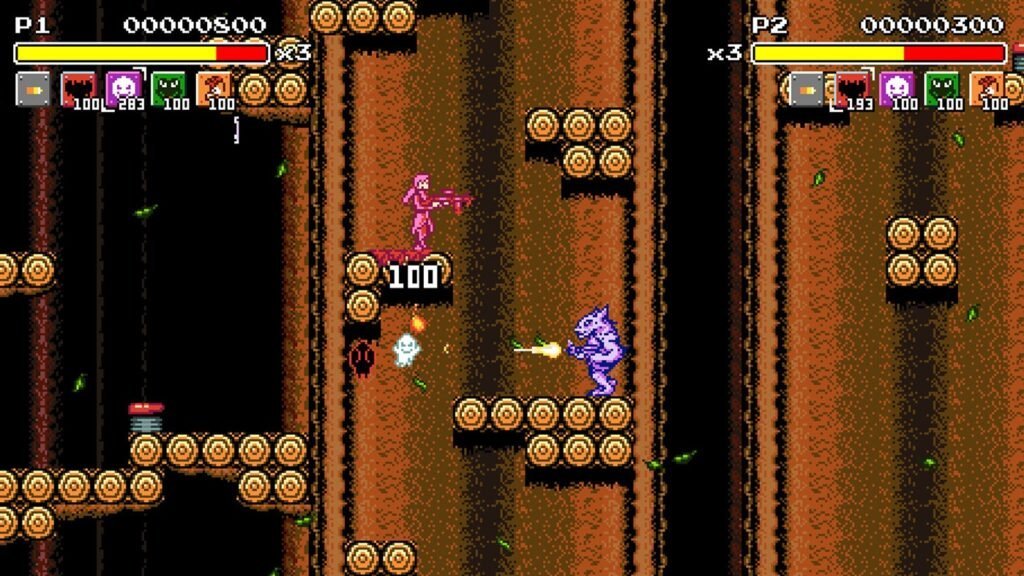 The need to be constantly moving is made difficult with airborne enemies, spikes and projectiles for example. Jumping and going prone will soon become second nature, taking shots from any angle in an effort to survive. Armed with a gun that has a handful of alternative bullet types such as toxic blobs, remotely detonated chickens and triple shots, the player will need to be strategic with their choice of ammunition as each is replenished individually with unique ammo pickups. Using all the explosive ammo early may leave you coming up short against the boss later.

Aside from the assortment of ammo types, each character has a unique special ability that is also replenished with special pickups. These attacks are particularly useful against the bosses and as their supply is much more limited and rarer to come across, their reserves should be considered before use. 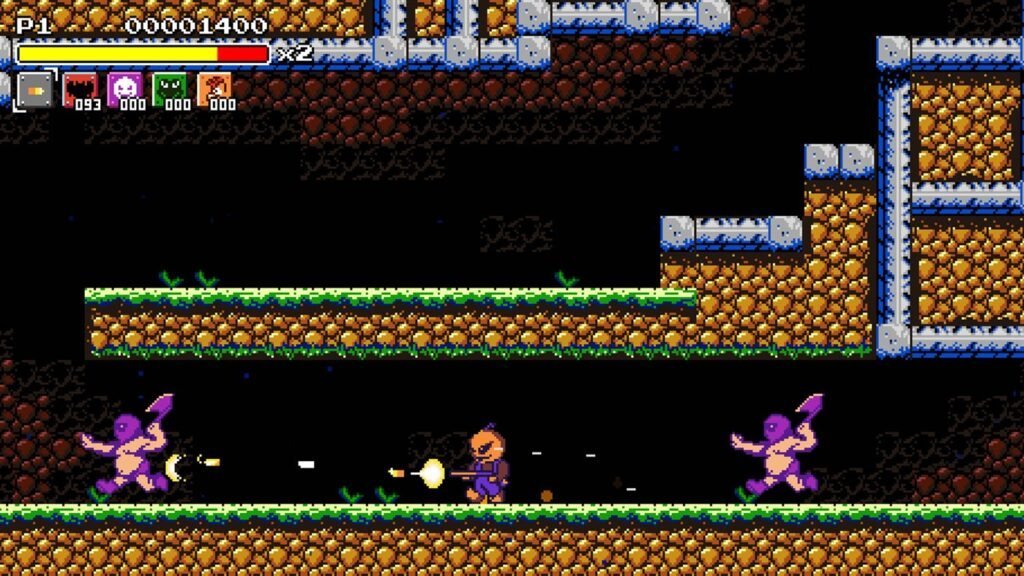 Boss battles in Savage Halloween are surprisingly satisfying. Their attack patterns are diverse enough to keep things engaging and challenging, without being difficult either. There is a nostalgic joy to the structure of these boss battles that are reminiscent of so many classic games of yesteryear.

Occasionally Savage Halloween mixes up the level structure by presenting endless-runner style levels where the player is always moving forward automatically, either on land, on a snowboard or soaring through the skies for instance. This variety is fun and certainly unexpected when compared to the core gameplay structure. While almost certainly intentional when considering the title, the difficulty becomes rather savage seemingly out of nowhere in these levels in particular. 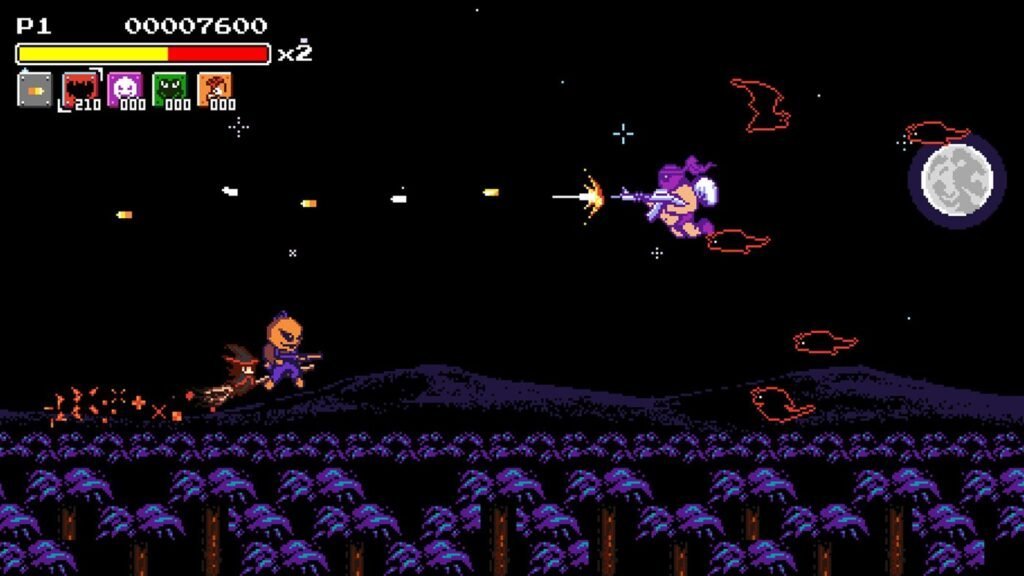 Being attacked from both front and rear without the ability to shoot behind you and the responsiveness of the jumps on the snowboard, when trying to avoid obstacles or fatal drops, can easily lead to frustration. In comparison to the typical levels, of which majority of Savage Halloween is comprised with, these are certainly the most likely candidates to cause the player to lose all their lives, continues and have to restart the level from the beginning.

The levels and enemy design are all appropriately halloween inspired, with enemy diversity that covers the usual suspects. Vampire bats, plague doctors, minion-wielding Santas, as I said – the usual. The visual charm of the retro-inspired shooter feels authentic to the era it emulates and offers gameplay and controls also befitting of its roots. 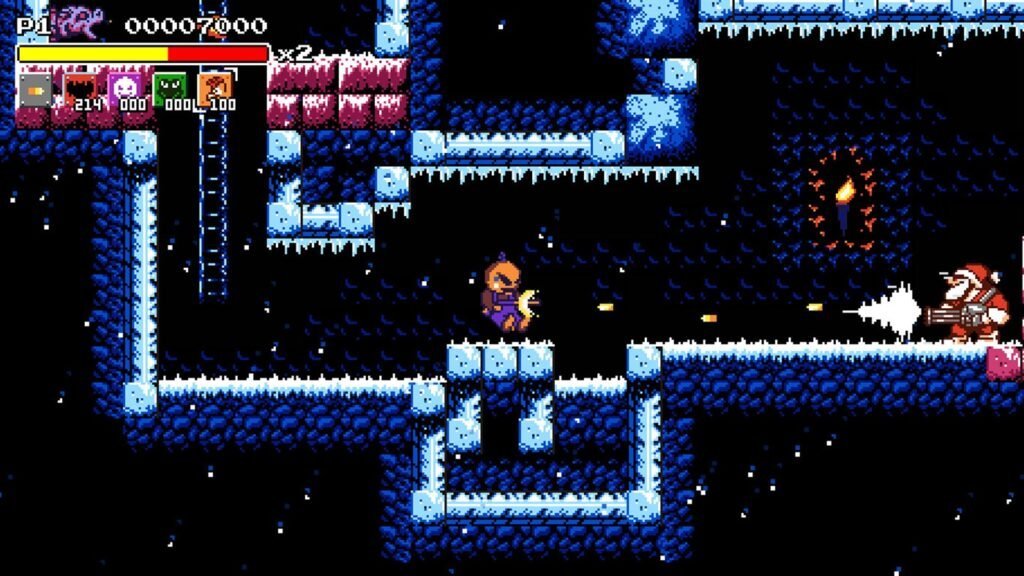 Savage Halloween is a challenging retro experience that feels like it could have existed on an arcade machine back in the 90’s in the best of ways. With simplistic gameplay and controls, fun boss battles and different but difficult endless-runner levels, there’s a near equal balance of fun and frustration to be had.

– Having to restart world on Game Over * A digital code was kindly provided by @Mac420 on Twitter for the purpose of this review. *