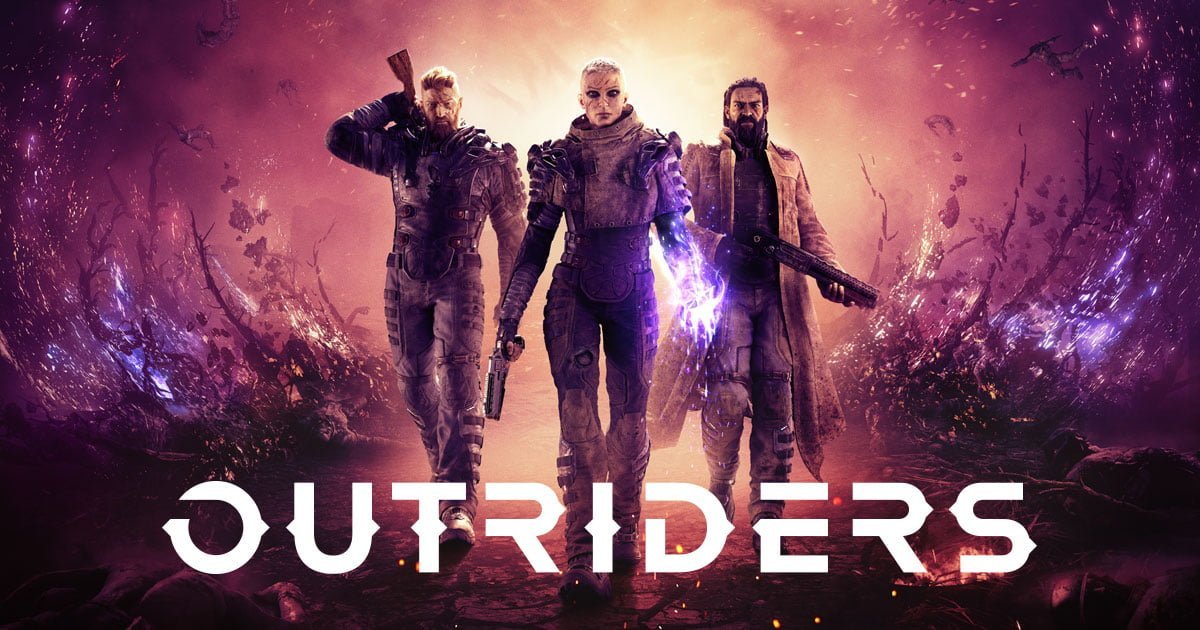 Developed by People Can Fly, Outriders is the latest addition to the growing looter shooter RPG space. Playing as a customisable Outrider that becomes Altered during a devastating energy storm known as the Anomaly, the player is graced with one of four elemental ability classes to tackle the near 15 hour campaign, over 50 side quests and an endgame consisting of Expeditions. Up to three players can squad up on the alien planet of Enoch to slay the various beasts and factions that inhabit it, customise their builds and grind out legendary loot.

As a member of the Enoch Colonisation Authority (ECA) sent to find salvation for humanity on Enoch after Earth is rendered uninhabitable due to climate disasters, the prologue sets the scene for the sci-fi elements that establish the intriguing premise of their pursuit of a mysterious signal. Unfortunately for Outriders the story fails to remain interesting beyond this and ultimately becomes as forgettable as the supporting characters that accompany or oppose the player. By the end of the approximately 15 hour campaign, the narrative journey doesn’t have a particularly memorable or enjoyable conclusion. 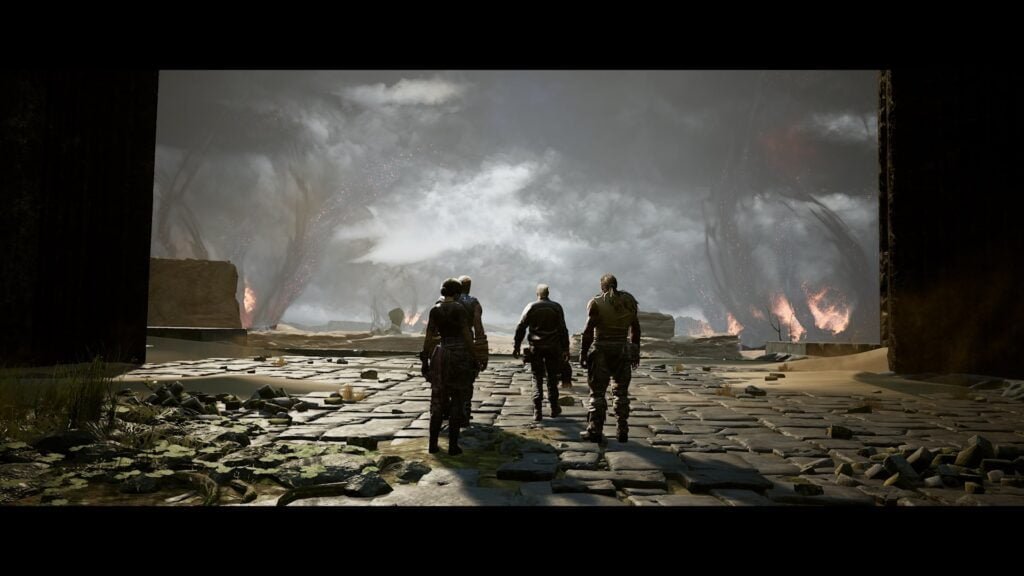 Preceding the prologue is a very light character customisation suite offering the choice of gender and a minimal variety of faces, hairstyles, piercings and markings. Aside from gender, all of this can be customised at the players camp sites across the planet with no in-game cost.

The four classes to choose from after the prologue are:

Pyromancer – specialising in fire based abilities that are effective up close or at range. Throwing walls of fire, temporarily stunning enemies in place as they are covered with ash and turning enemies into thermal bombs are just a few examples of the elemental carnage they can create

Devastator – a powerhouse Tank type class that works best at close range. This class has higher health and can sustain greater damage 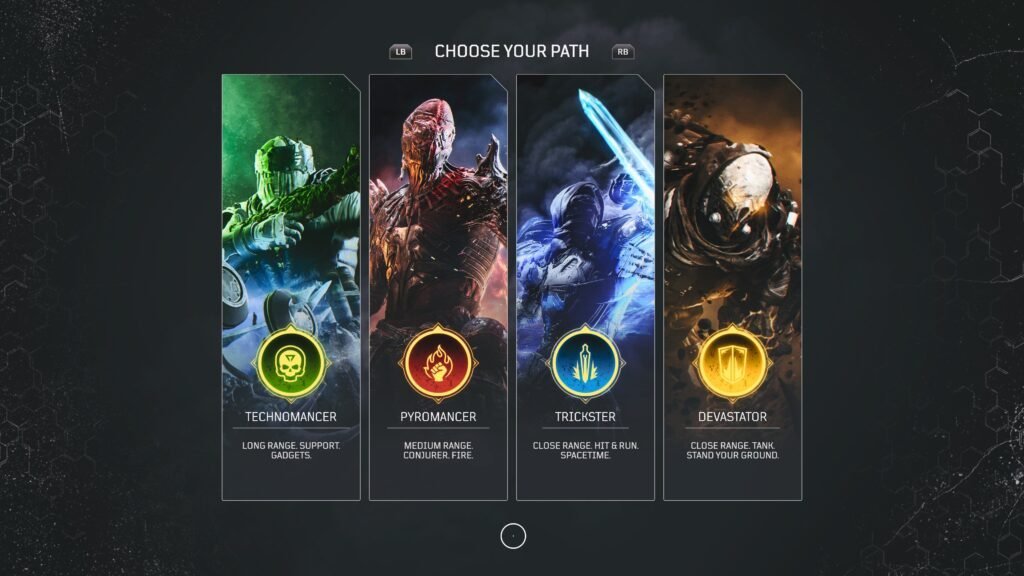 It is worth noting that players looking to experiment with multiple classes are able to skip the prologue in alternate playthroughs and jump straight to class selection. This is a great feature in terms of accessibility without having to replay the prologue again.

Each class has eight unique abilities to unlock which only occurs upon meeting specific level requirements as they progress towards the level cap of 30. Three abilities can be equipped at any one time and can be changed at will in the skill section of the menu. The ability to change and experiment so freely is great for determining what type of build the player wants their character to be without the restraints of having to do so at a camp between missions or outside of combat. 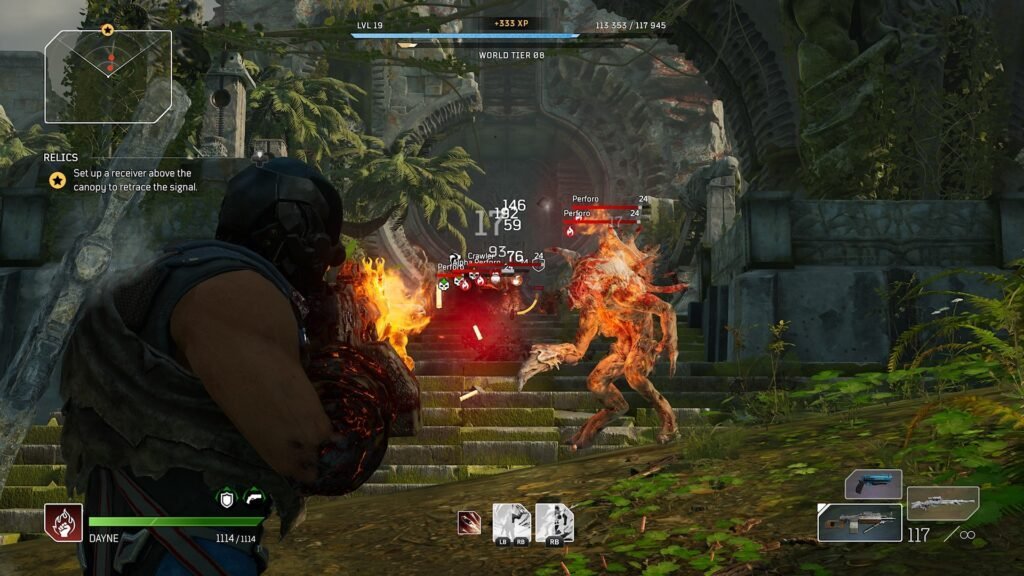 There is also a skill tree that is tailored for each class. The trees themselves feature common skills such as extra damage, armour or health for example but also feature class specific abilities. These can be unlocked by spending class points which are awarded during progression. Class points can be refunded at no in-game cost to allow for experimentation within the three branches of the skill tree.

As a loot driven game Outriders has a decent customisation suite as far as gear goes. Two primary weapons can be equipped as well as a secondary pistol, helmets, torso, legs, boots and gloves can also be equipped with gear that ranges from generic in appearance to badass, toting bones and skin of Enoch’s predators. As with most RPG’s each item has a rarity that varies between common and legendary, the latter is awarded for completion of certain side quests or playing at higher difficulties, especially as drops from bosses. 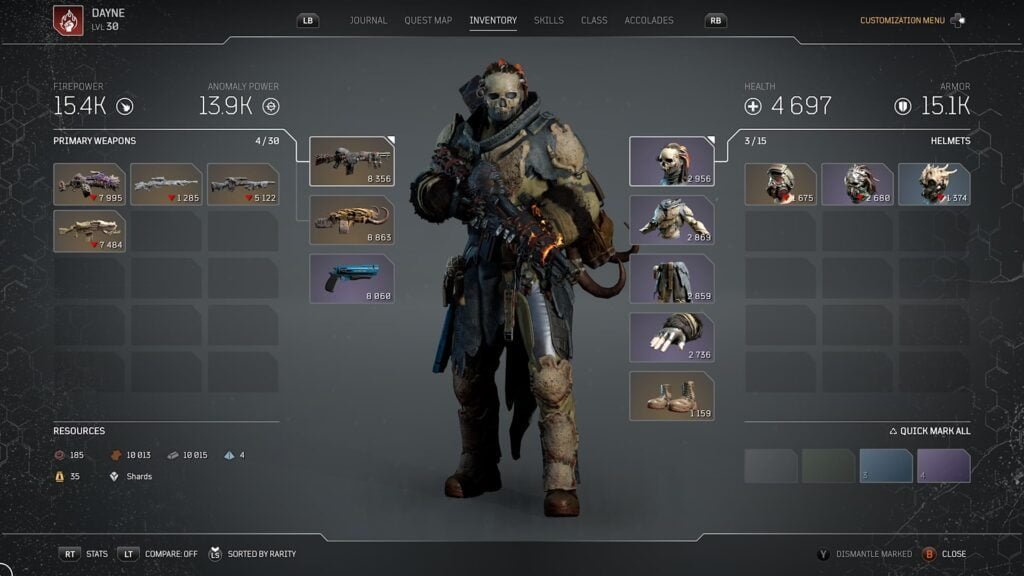 The gear itself can be obtained as loot drops from defeated enemies, chests in the environment, rewards for completing side missions or bought from vendors. Every piece of gear can also have its rarity increased, level increased and mods equipped for example at the cost of the various in-game resources available. Ensuring that high level gear is always equipped is essential for keeping up with the games dynamic difficulty scaling in the form of World Tiers. 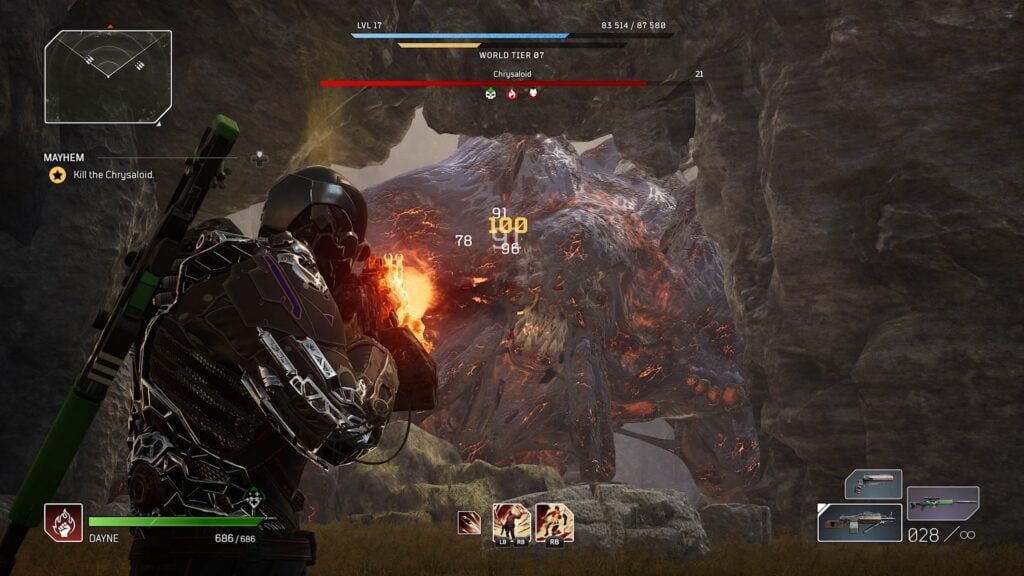 These 15 tiers are gradually unlocked by filling the current World Tier bar by gaining experience. Each tier increases the difficulty but also increases the frequency of legendary loot drop rates and wearable level caps. The player is able to downgrade to previously unlocked tiers if they are having trouble with the one they have unlocked but they will not reap the benefits nor make any progression towards the next tier. 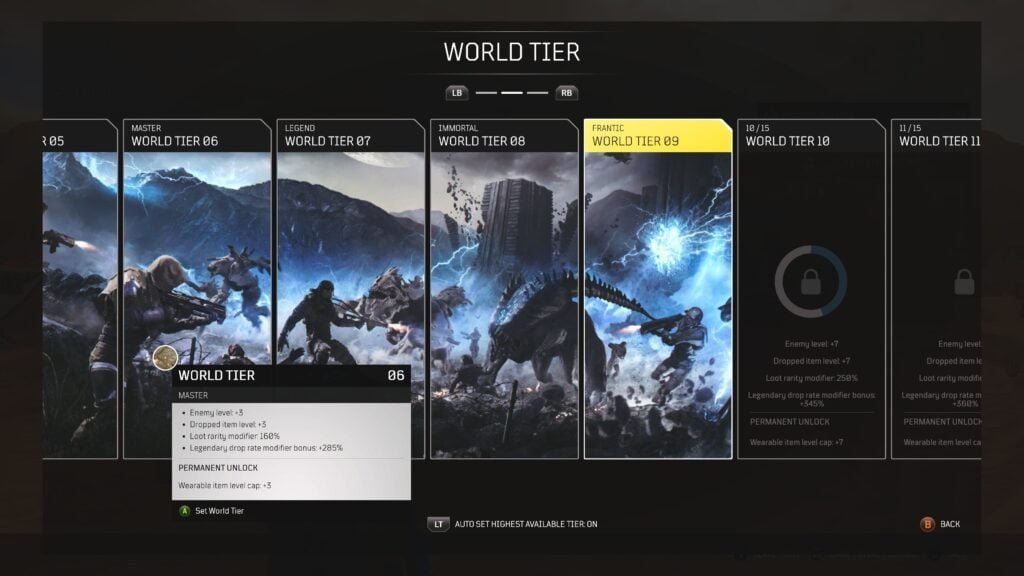 In my first playthrough I played solo and focused only on the story, not participating in any optional side missions and completed the story having obtained World Tier 10 and at player level 28, which is capped at 30. At no point was the story difficult enough to warrant reducing to a lower tier and in fact, I wish there was an option to manually choose higher tiers to make it challenging. As Outriders is essentially just a linear horde mode, there is minimal challenge in constantly moving to avoid the waves of enemies and take them down. This significantly dampened my enjoyment with the lack of challenge. 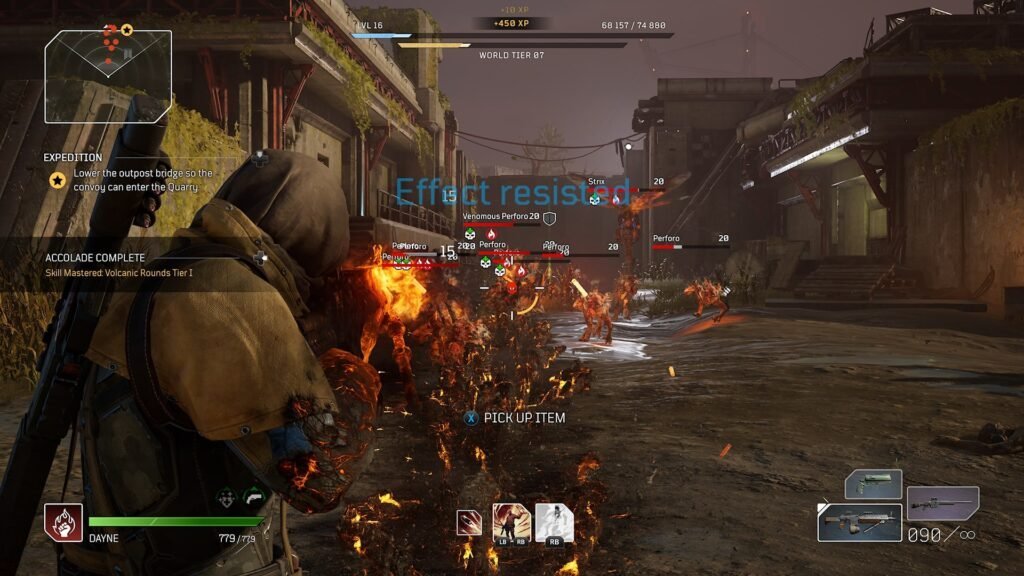 Aside from World Tier and player level there is also an Accolade level. Accolades are broken into several categories such as Combat, for specific amounts of kills with certain weapons for example, Item Management for activities such as loot sold or dismantled and turned into crafting components, and class specific Accolades for getting X amount of kills with each ability for instance. Each Accolade level attained awards customisation options for things such as the group’s vehicle (that can’t be driven) and the player’s flag (which is planted when unlocking fast travel points). 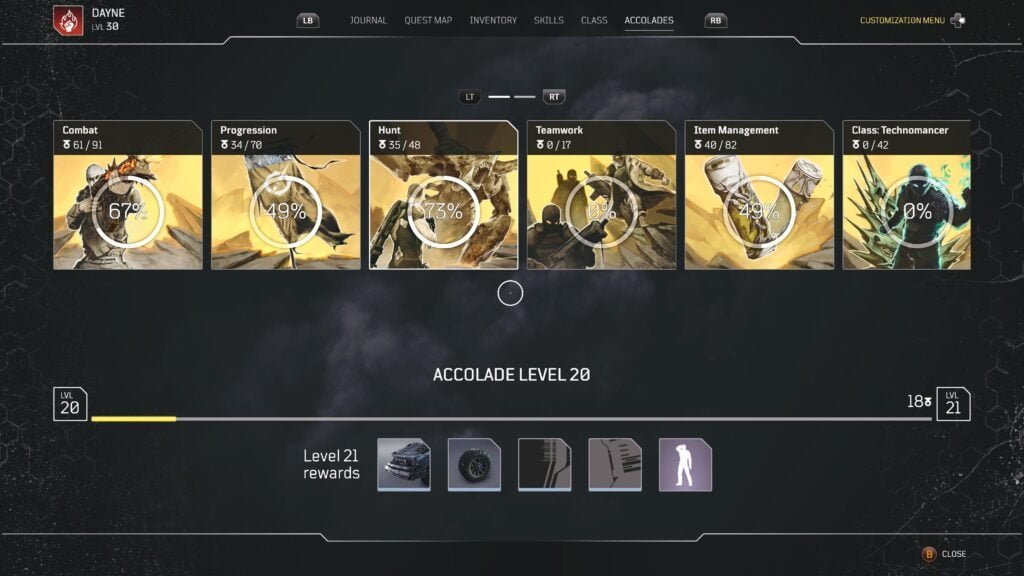 The gameplay felt to me like a cross between a pair of popular franchises that span different genres. The mobility, traversal and gunplay is like a fast paced version of the Gears of War with abilities reminiscent of Mass Effect. Unfortunately a sense of repetition sets in very early on with the gameplay. The entire campaign feels like a never ending horde mode forced in a linear direction both narratively and in terms of the environment.

The novelty of each classes abilities wears thin very quickly, due in part to their lack of evolution. They can be slightly altered through mods that can be equipped to gear or weapons but not enough to keep them feeling satisfying or interesting. To be fair there is a wealth of mods to be unlocked that offer the likes of health regeneration, armour buffs, extra ability use before it’s cool down or application of status effects. They don’t however change the core gameplay from being literally limited to gunning down waves of enemies before moving on to the next. 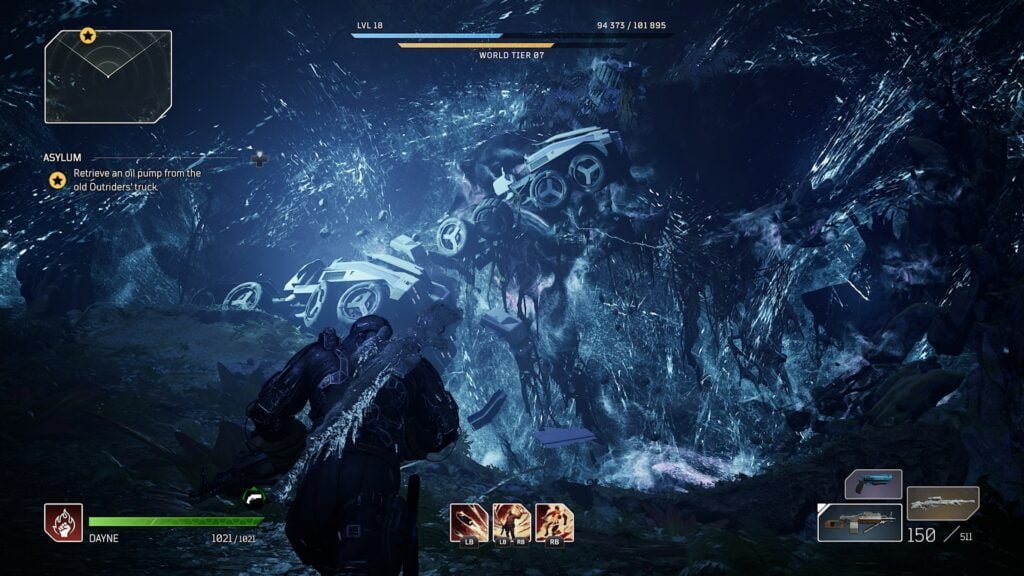 The gameplay is further disjointed by the awkward inclusion of cinematics for the simple task of opening certain doors, climbing things or jumping across a bridge, simply to return to the gameplay a few seconds later. The map itself is broken into several small environments that are somewhat open but not enough to avoid feeling linear and restricted. When the core gameplay consists of defeating a wave, opening a door or finding a key and repeating, the disconnect caused by these interruptions and the unsatisfying repetition hurts the immersion and simply becomes less fun.

Upon completion of the story the player has access to the games endgame content which almost entirely consists of the Expeditions mode. Coming with its own Expeditions Tier system, the missions remain in the style of horde mode and tasks the player/s with completing within one of three time frames and being awarded either a gold, silver or bronze ranking. Dependent on the tier being played at and the time the Expedition was completed in will impact the mission rewards with no meaningful rewards coming without completing on the highest tier available and with a gold ranking. There is however a very generous loot award at the end regardless of completion rank though earning a bronze or nothing at all will only award low level gear. 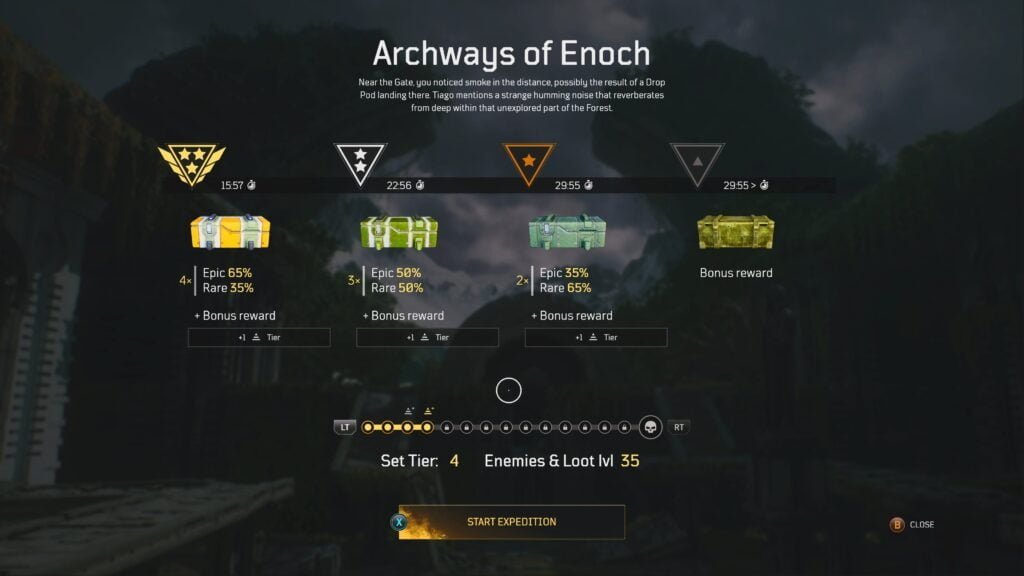 As the meat of Outriders’ endgame, this mode is disappointing and uninteresting though it is certainly more difficult. Playing solo on the higher tiers is a nightmare and certainly easier with a squad. Completing these missions also awards Drop Pod resources which can be spent at specific vendors or used to unlock some of the other Expeditions. Gating some of these missions behind large resource paywalls which take pretty significant grinding, especially when playing at a lower tier, is likely to put the more casual of players off though it is also likely to alienate fans of the genre as well, myself included. Other than grinding out legendary grade gear, there is little reason to pursue this mode other than perhaps wanting to complete all of the Accolade challenges.

Outriders is visually satisfying, offering an array of diverse and interesting locales to explore and shoot through. There are stunning environments that beautifully portray deserts, frozen wastelands and gloomy jungles for example. Certain enemy types only appear in specific biomes but unfortunately these are typically the same enemies just with a different elemental attack or appearance. The most common mini-bosses are the same enemy with a different coat of paint and type of attack, further hindering the immersion or sense of genuine enemy diversity. The supporting character models are distractingly less detailed than the player in many instances though the enemy designs are actually pretty impressive.

The voice acting limits any emotional attachment between the player and the characters or screen or the story that is being told, further removing the player from an immersive experience. The score though is very strong, moody and tense and the sound effects are excellent.

Outriders is no stranger to explicit language or gory violence and is certainly not recommended to be played with, by or around children. 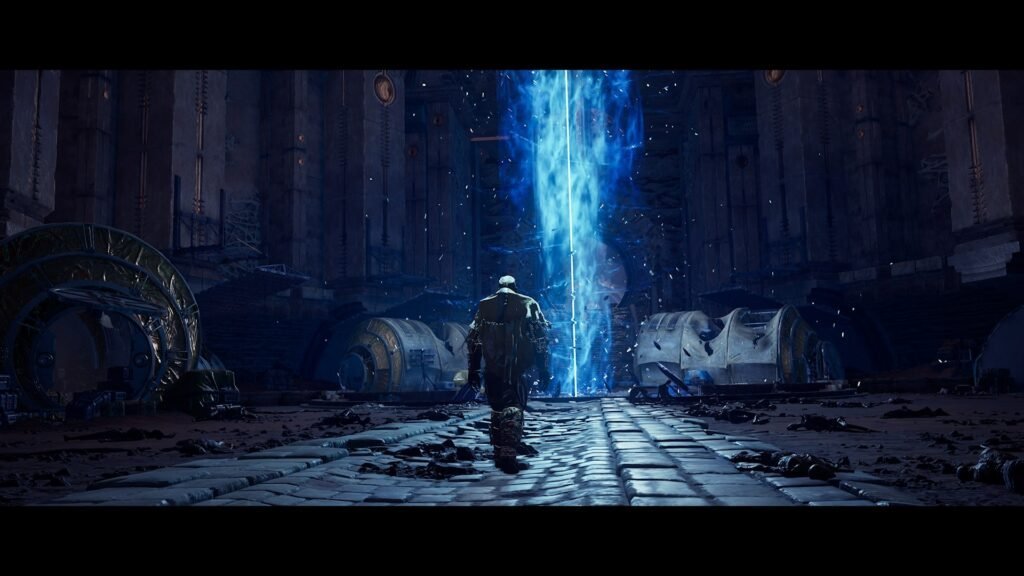 Outriders is a very confusing experience. The loot system is excellent, the cosmetic gear is pretty solid and varied and the visuals are impressive. The story however is lackluster and the gameplay itself fails to remain fun or satisfying after just a few hours. Its endgame succumbs to a similar fate of others in the genre in limiting itself to little more than a mindless gear-grind. A casual player looking for something different and mindless will likely be satisfied in playing through the linear story while diehard fans looking for something to keep coming back to will be left wanting more. The significant lack of mission variety is perhaps the biggest culprit in this experience feeling so repetitive.

– Story fails to be as interesting as it’s premise

– Difficulty too easy – with the exception of Expeditions 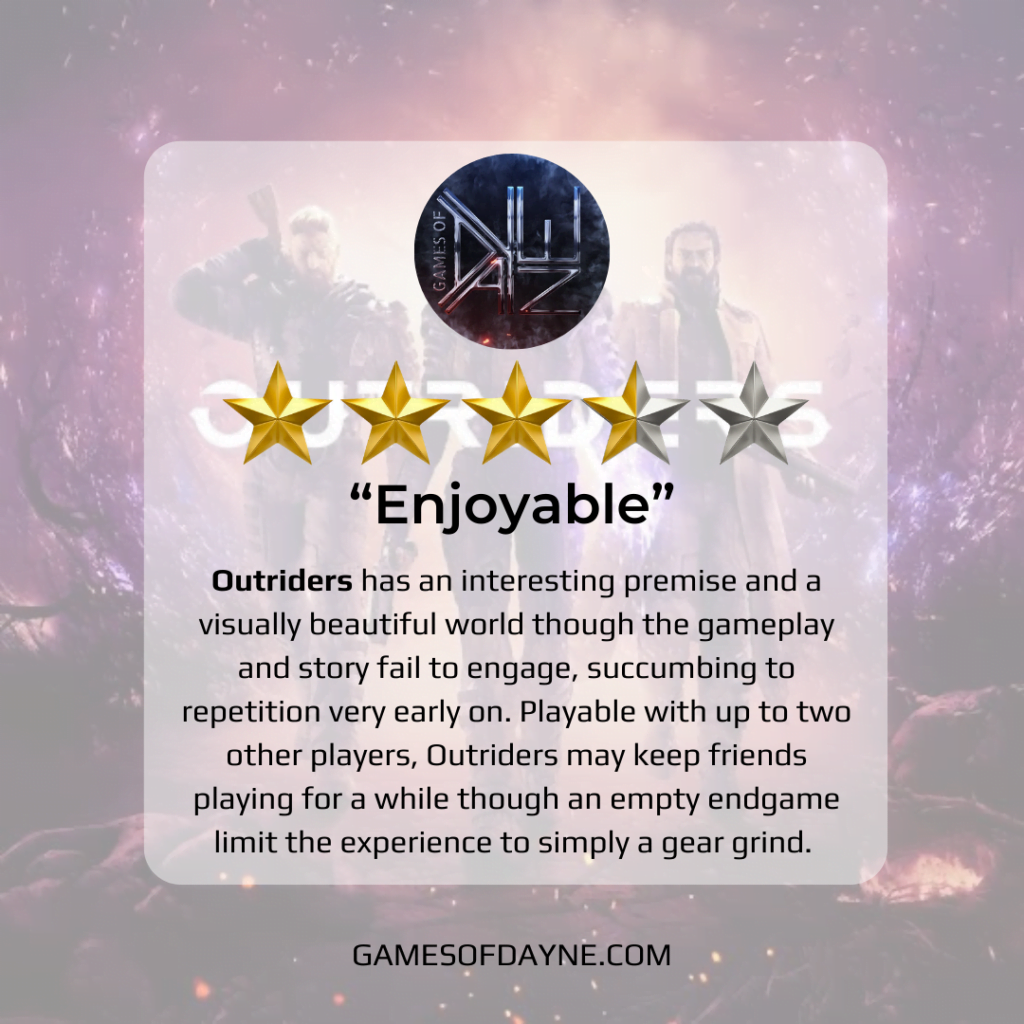 Developed by: People Can Fly