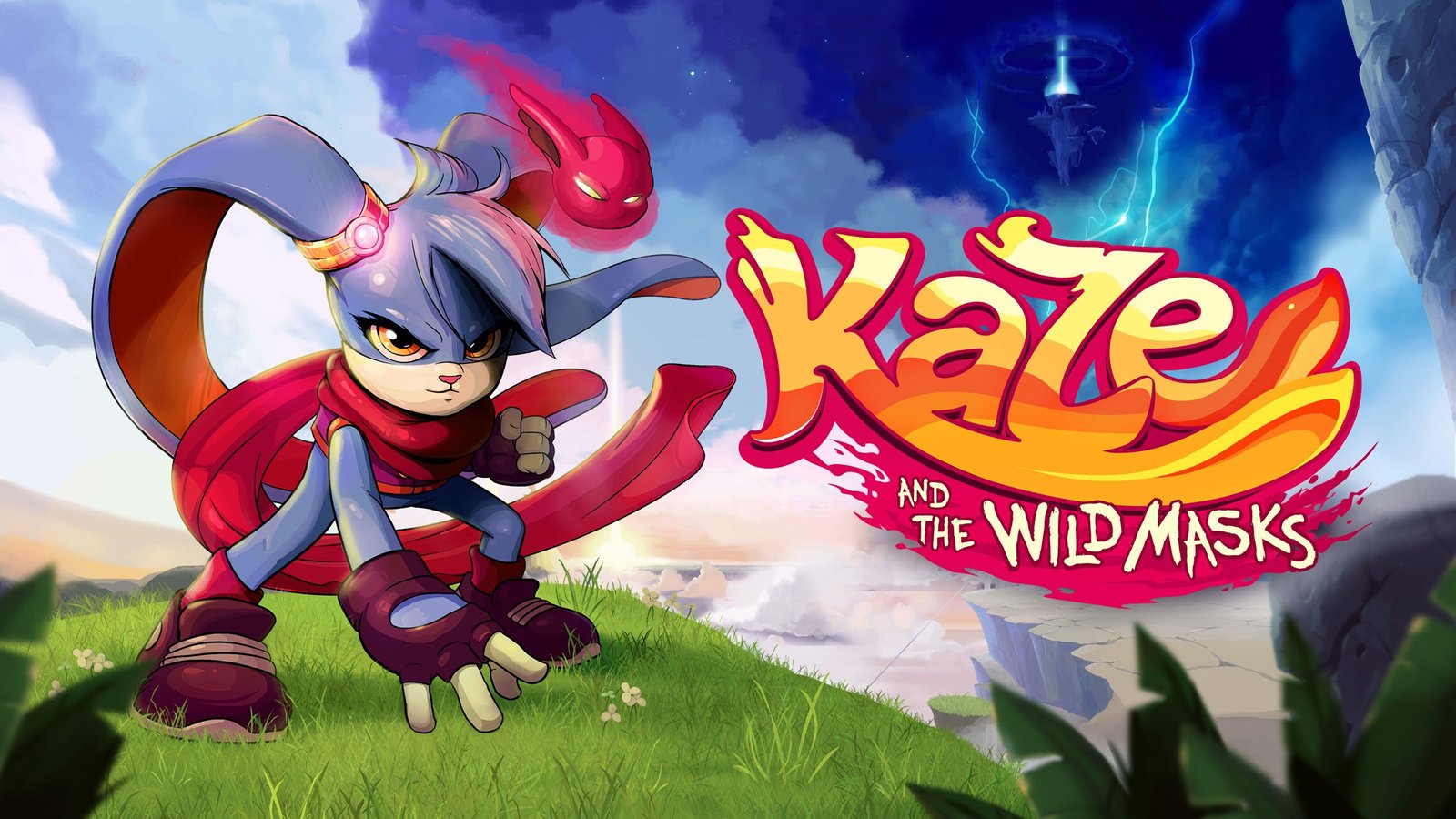 2021 will be undoubtedly be remembered for many things but when it comes to video games, specifically of the 2D side-scrolling platforming variety, it will be remembered as the year of the genre defining instant classic that is Kaze and the Wild Masks.

Unashamedly inspired by the likes of the iconic Sonic the Hedgehog, developer PixelHive have taken a tried and true formula and raised the bar with the adventure of Kaze in all of its stunning pixel art glory. Offering over 30 levels with twice amount of hidden bonus levels, Kaze and the Wild Masks is a meaty addition to the genre and matches gameplay quantity with quality and heart.

The opening scene stunningly depicts Kaze’s friend Hogo being ensnared in a curse that unleashes chaos amidst the Crystal Islands. The animated illustrations the rear their head occasionally amongst the gameplay is as beautiful as the score that accompanies them. Before getting into the incredible gameplay experience ahead it is worth noting that the story, outside of the gameplay itself, is limited to the opening and closing moments of the adventure. As this minimalistic story approach is typical of the genre, especially of titles in the 90’s, this does not detract from the overall experience. 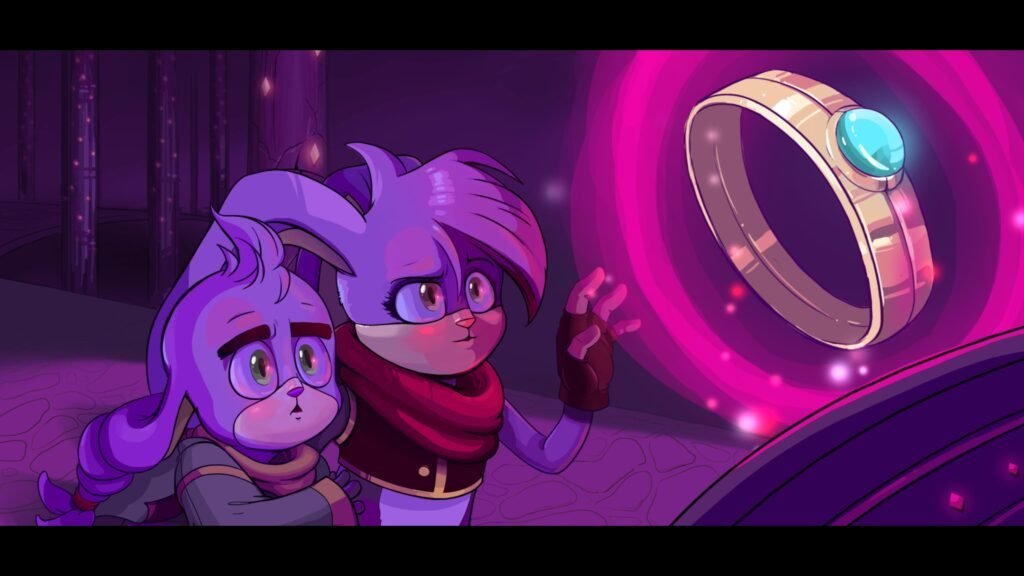 Four islands comprise the Crystal Islands, each containing six or seven individual levels. Completing each level is as simple as making it to a portal at the end though there are two bonus levels hidden within every single level, with the exception of boss fight and special levels reserved for the completion of each bonus level on that particular island.

Completing the level awards a yellow gem, each bonus level awards half of a green gem with the completion of both resulting in a whole green gem and additionally, collecting 100 purple crystals awards a purple gem. The players progress is displayed on screen at the end of the level and can also be seen in each islands hub world where levels can be selected and replayed at will. These optional objectives add replay value that is further increased with the introduction of an optional time trial to initiate upon replaying the level. Appealing to casual players, completionists and speed-runners, Kaze and the Wild Masks truly has something for everyone. 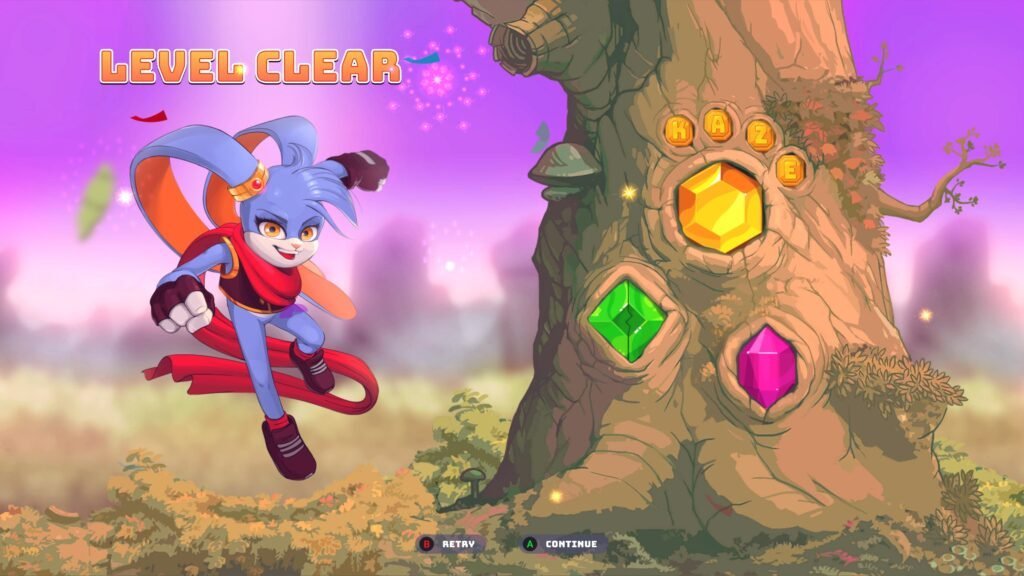 As a 2D side-scroller, the player moves across the screen and is tasked with a variety of elements to overcome. Jumping to new platforms and over gaps and defeating enemies along the way with a spin attack or by jumping on their heads comprises the core gameplay by its simplest definition but Kaze is far more layered than that. 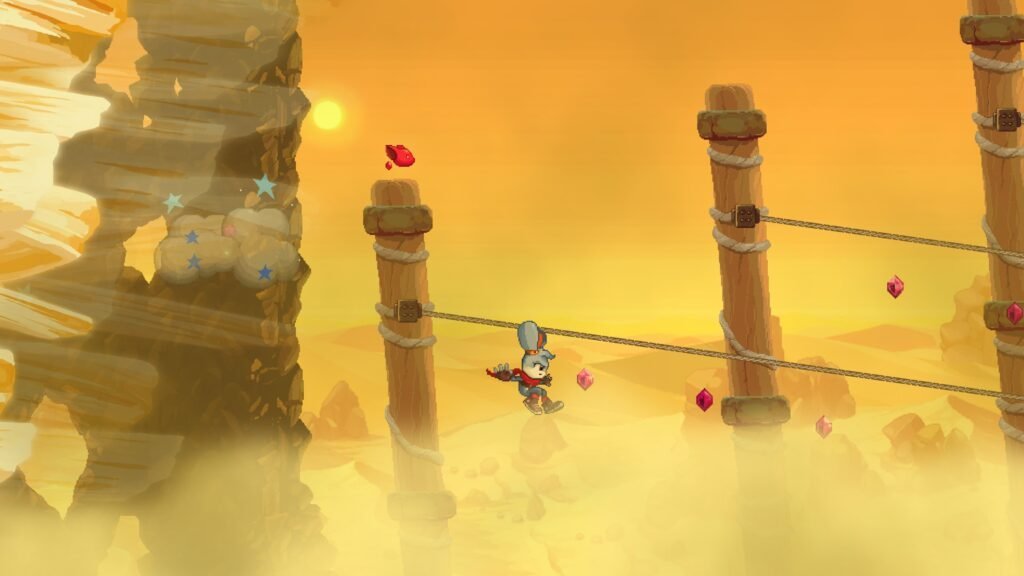 Every few levels a new mechanic is introduced to mix things up such as moving platforms and ropes to climb or crossbows that shoot Kaze in a visually indicated direction for instance but perhaps the most fun mechanics are the masks. Appearing at predetermined and unmissable points in most levels are statues with a mask that Kaze can equip. Embracing and embodying the spirits of these masks affords Kaze special abilities that are fun, varied and interesting. 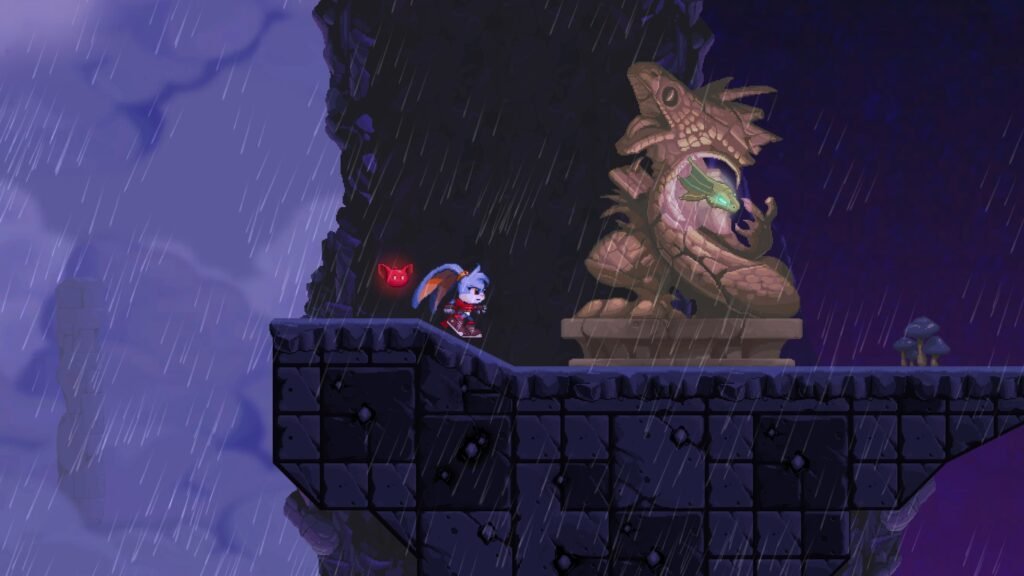 It’s fun to see how the gameplay changes to suit the mask and keeps it fresh and varied, not allowing the feeling of repetition to sink in. Mastering the abilities of the four masks is essential for players looking to fully complete every single level and discovering the hidden secrets along the way. The final boss encounter incorporates all four masks in survival sequences in between the main combat phases in what is an epic and patience testing climax that ultimately nails what a boss fight should be about. 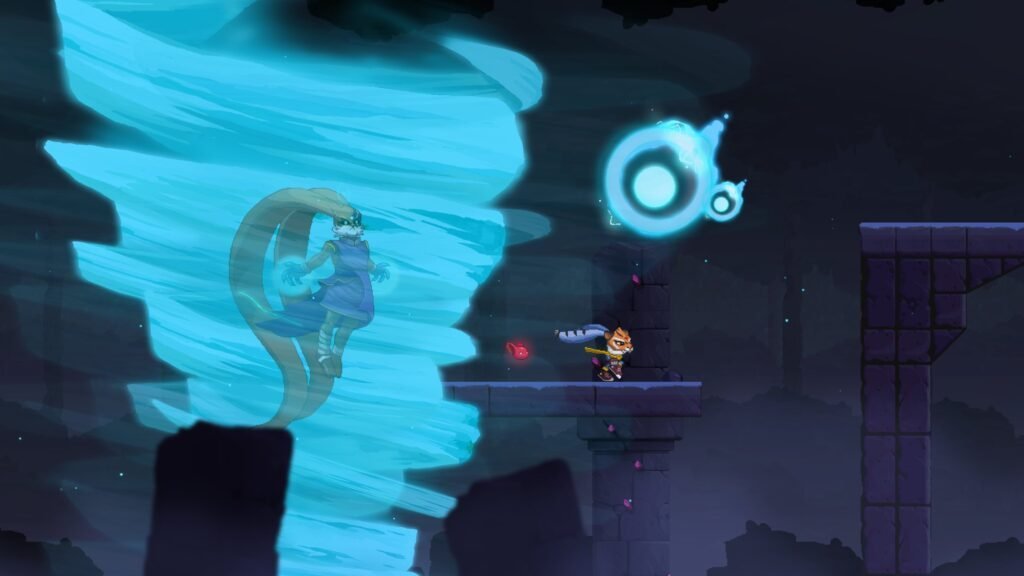 The boss fights are reserved for the final level of each island and fans of the genre, and specifically the earliest Sonic titles, will be familiar with the approach of avoiding the bosses attacks until a window of opportunity presents itself to get a single attack in. The boss proceeds to then mix up the encounter until hit a few more times. These are fun, rewarding and incredibly nostalgic encounters that simply succeed in what they have been designed to do. 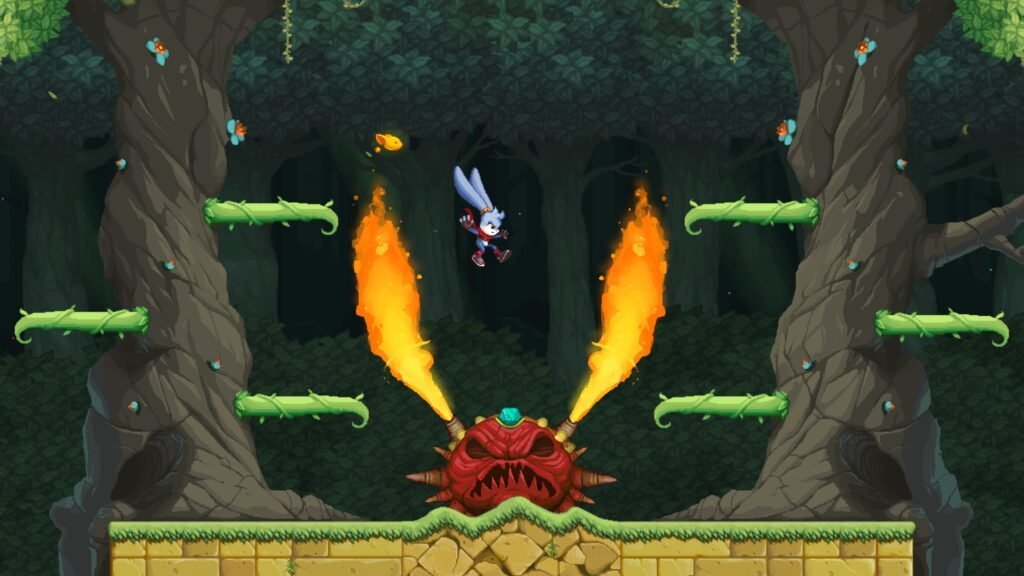 An incredibly enchanting score that varies depending on the versatile locations Kaze travels to nails the feeling and uniqueness that each level brings. Accompanied by beautiful and vibrant artwork of these locations and the charming character models, particularly the menacing vegetable enemies that are playfully creative themselves, the overall feeling of the audio-visual tag team is nostalgic, mesmerising and outright wonderful on every level. The simplicity of the art is brilliantly amplified by the subtle details present in every aspect of the characters, environments and the audio happenings that genuinely remind me of my earliest childhood gaming memories. 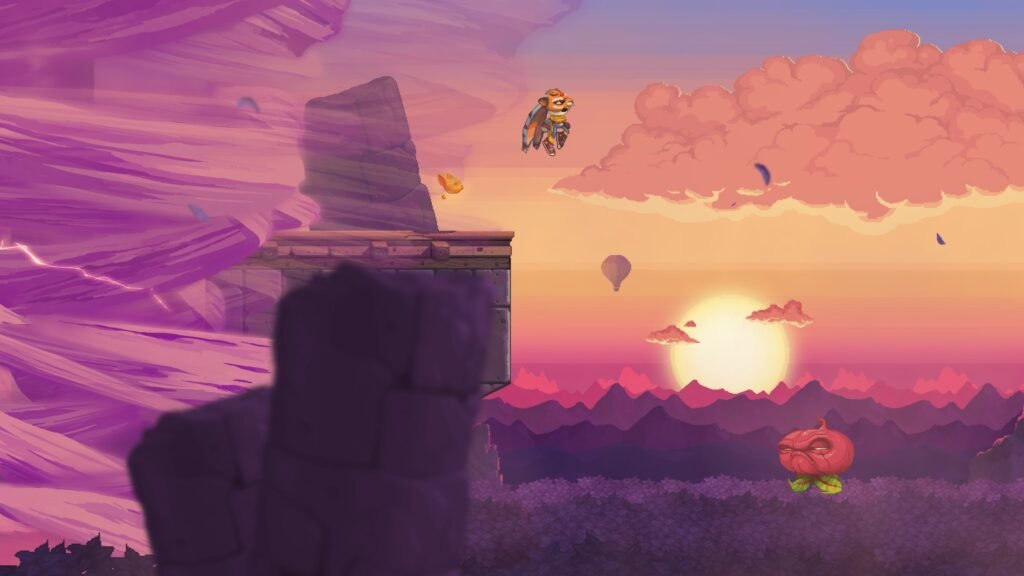 Kaze and the Wild Masks is an amazing experience that has the potential to be an iconic contribution to the genre for years and decades to come. This is a treasure of a game, a genuine joy for players of all ages and quite possibly one of the greatest 2D platformers to ever grace a console. 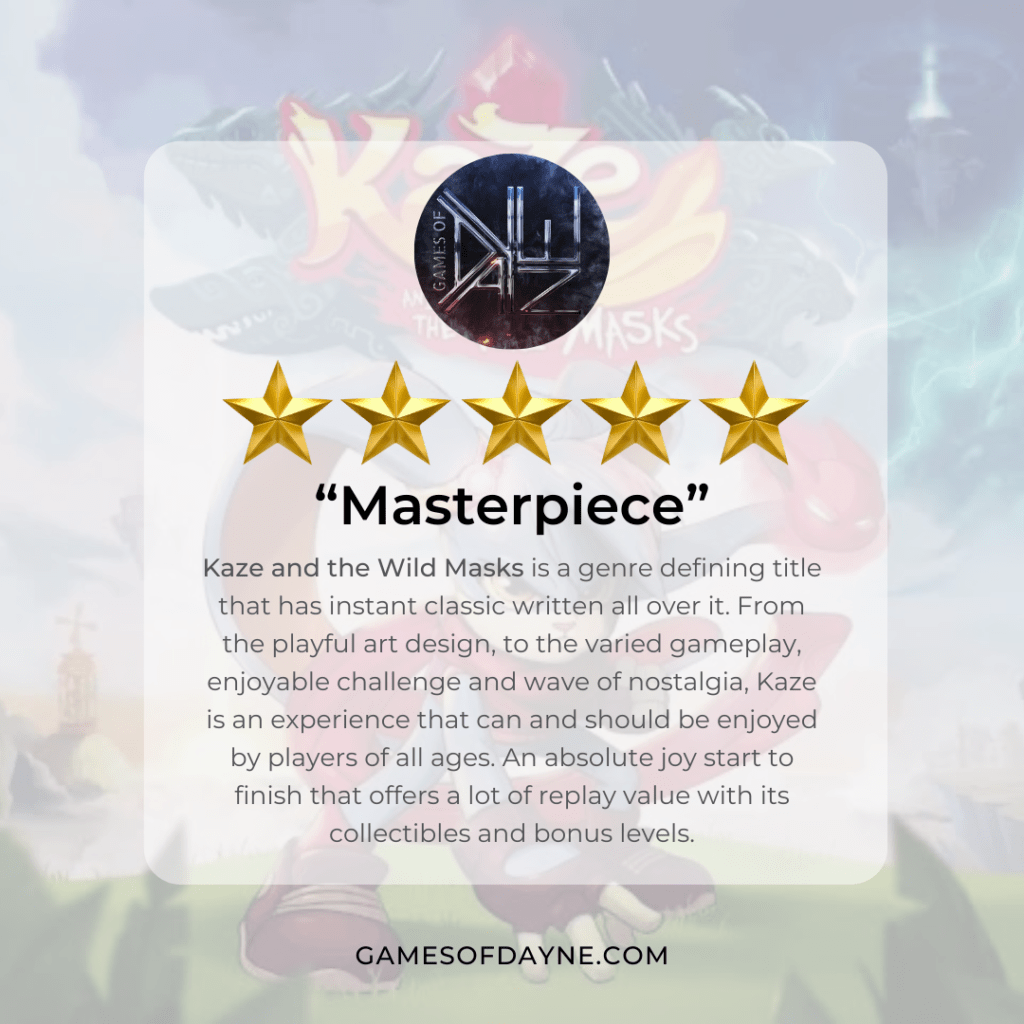 Tags: Kaze and the Wild Masks