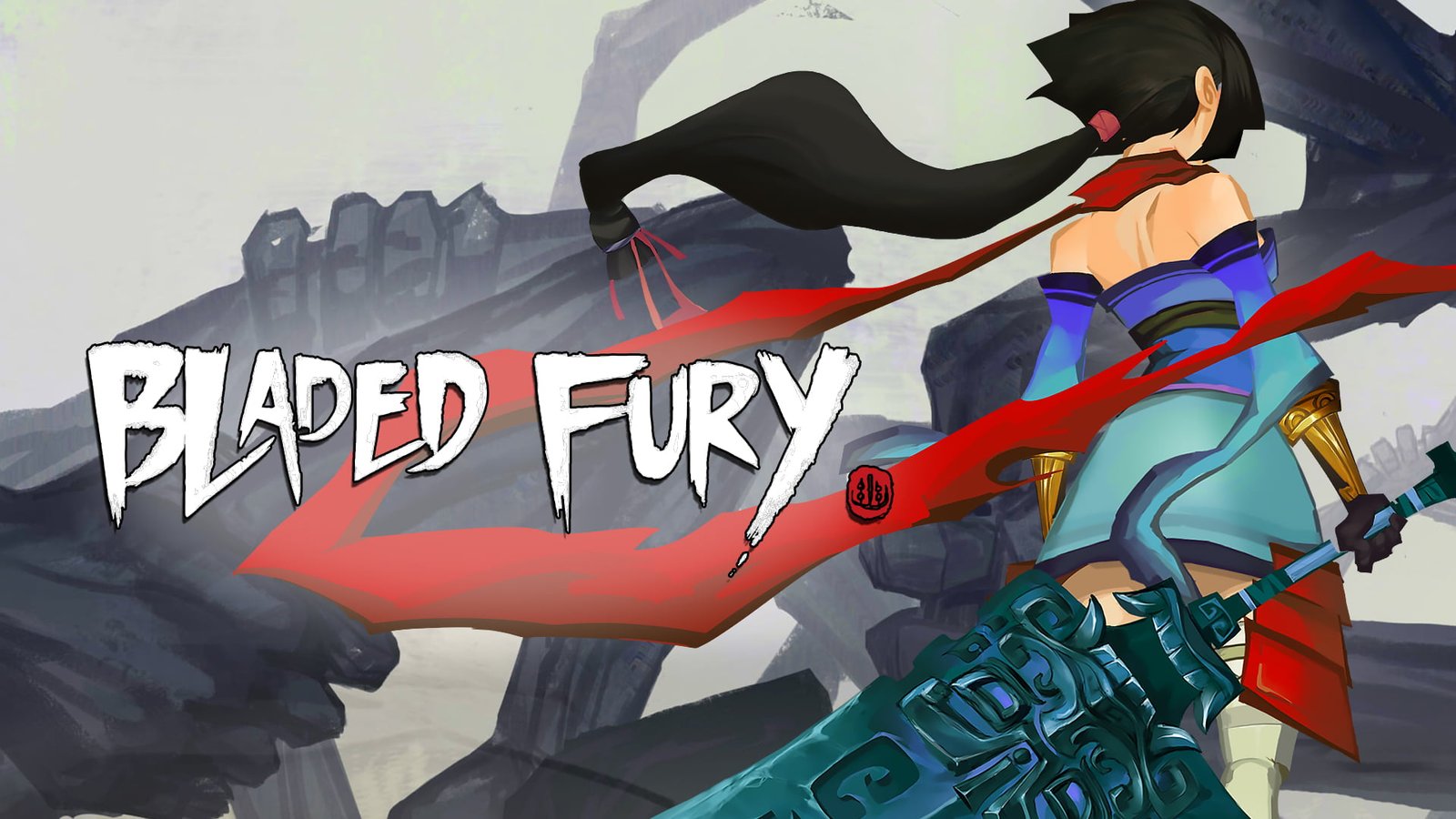 Bladed Fury mashes Chinese mythology with a very stylish 2D action platformer in a tale of betrayal and a quest to expose the truth. Ji Jiang, exiled by her clan after being wrongfully accused of her father’s death, must fight to restore her honour and expose the sinister Tian Clan that are behind it.

The story at its core is about Ji Jiang proving her innocence and exacting revenge against her accusers. Aided by the spiritual and physical strength of deities, Ji must hack and slash her way to innocence and in the process free her enslaved sister from her tyrannical captors. The premise is certainly the most interesting part of the story as it fails to gain momentum or feel like anything other than an afterthought throughout the roughly three-hour experience. With the exception of Ji herself, the supporting characters aren’t fleshed out in a meaningful way to generate interest or investment from the player. 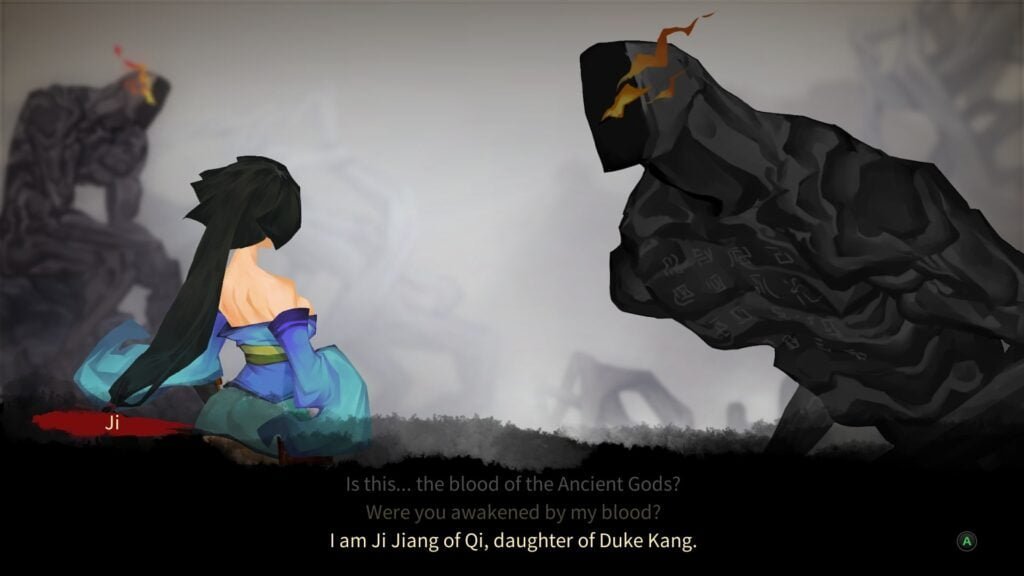 Armed initially with a pair of swords, Ji soon receives a heavy blade which deals devastating damage. These weapons each have their own attack button and combos, though at its simplest Bladed Fury can easily be conquered with button mashing or spamming a singular attack. An evade maneuver can be woven into the combos to allow the player to control the side-scrolling environment and catch the enemy off guard. This evade is very effective as it negates any damage from both enemies and environmental hazards and traps such as fire. The combat is very basic and easy to master and the enemy variety for the most part can be dispatched in mere seconds. 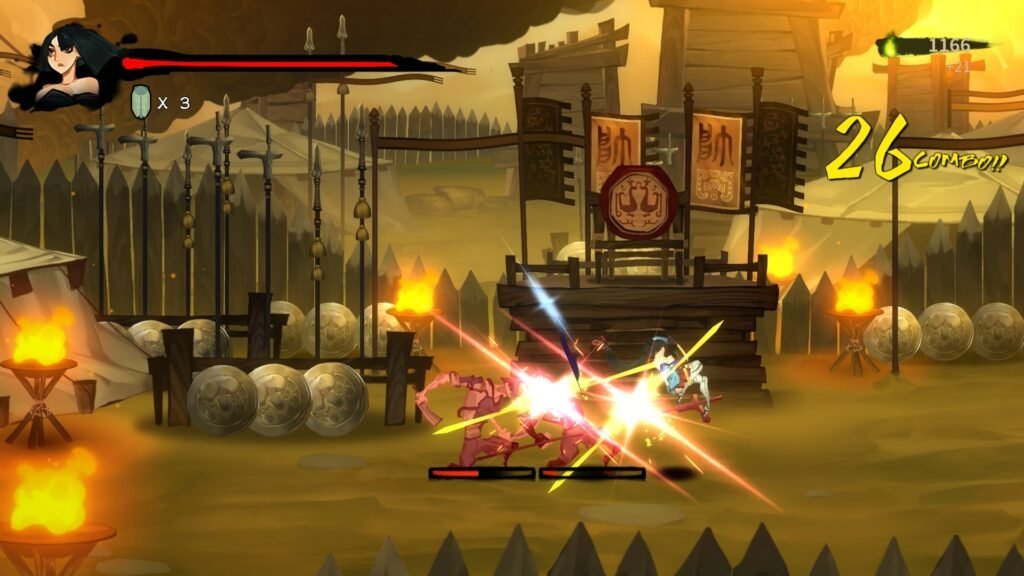 Some enemies have an additional health bar and have a yellow outline around them to indicate this visually, as well as their health bar below their feet, and must have this bar depleted before their actual health bar can be dwindled down. Other enemy types have shields which require the player to jump or evade behind them to attack their exposed backs and others fire projectiles that can later be deflected back. Armed herself with cicada wings, Ji is able to use these to form a shield which can block enemy attacks too, balancing the fight. With swift attacks, a shield to defend and an almost too good evasion technique, the player is able to conquer the multiple enemy combat encounters with ease. 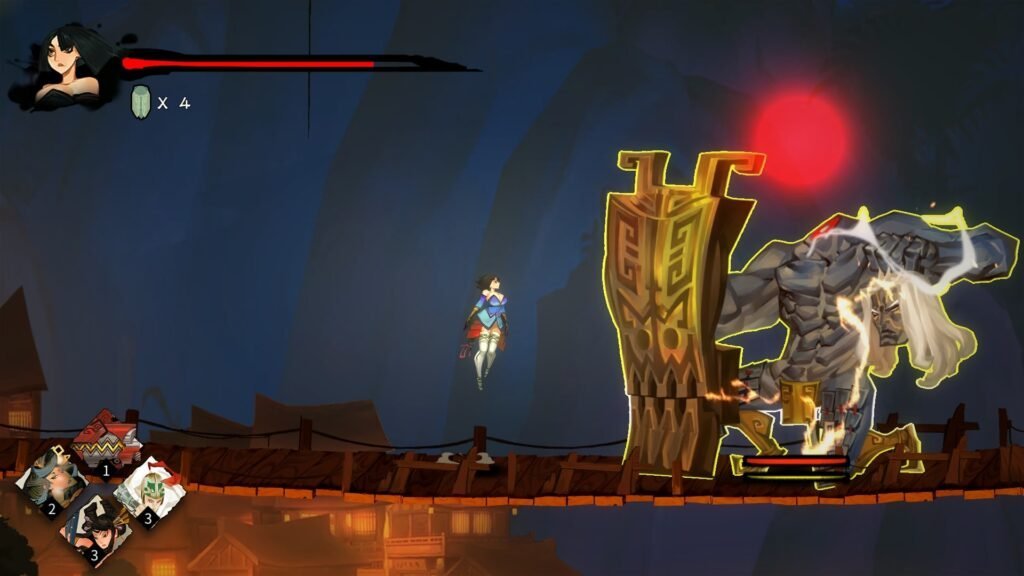 With story progression Ji receives the ability to equip Soul Slivers. These are temporary summons, calling upon the strength of gods to assist in combat. Narratively, this is explained as a result of the death of someone with extraordinary powers leaving their spirit and forming these slivers. Four can be equipped at any one time from a total of six, each slowly acquired throughout the story. These are very powerful attacks that have a limited number of uses that won’t regenerate until the next chapter. 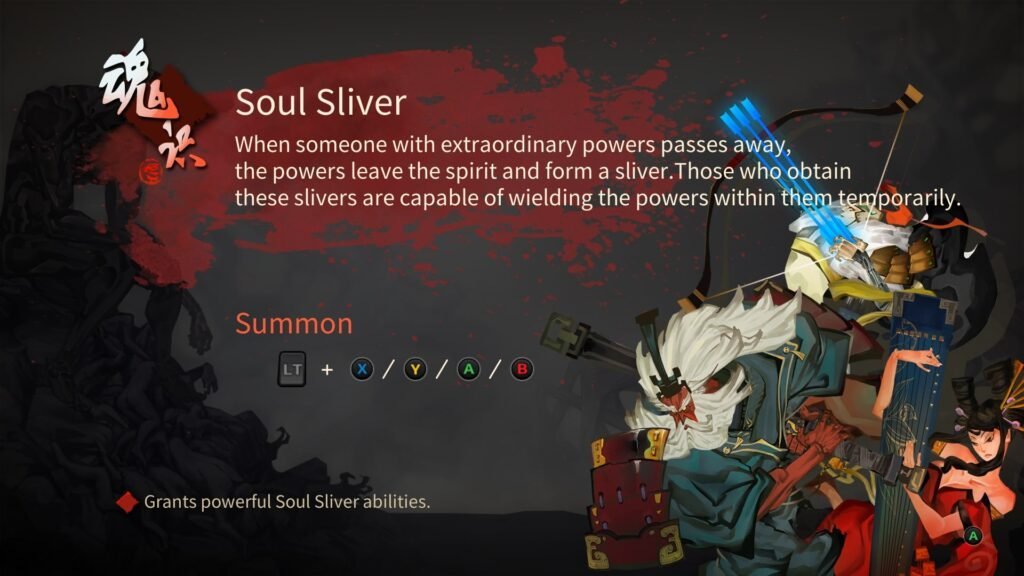 Spread throughout each chapter are Soul Lamps, used to heal the player, customising the soul slivers equipped and for upgrading weapons and Ji’s health at the cost of souls dropped from defeated enemies. 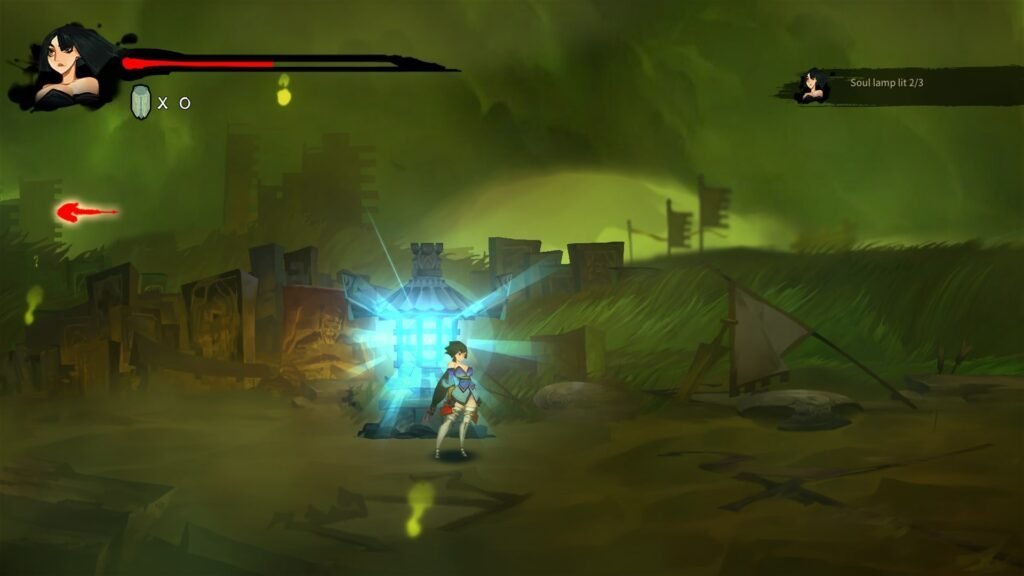 Throughout the story the player will experience a number of boss battles, typically against larger-than-life monstrosities that each have their own techniques and strategies. These battles on occasion incorporate platforming elements, such as platforms that move or disappear that need to be traversed to attack exposed weak spots or to avoid damage. This makes these battles more interesting than simply spamming the quick attack button and introduce strategy that certainly makes them more enjoyable. 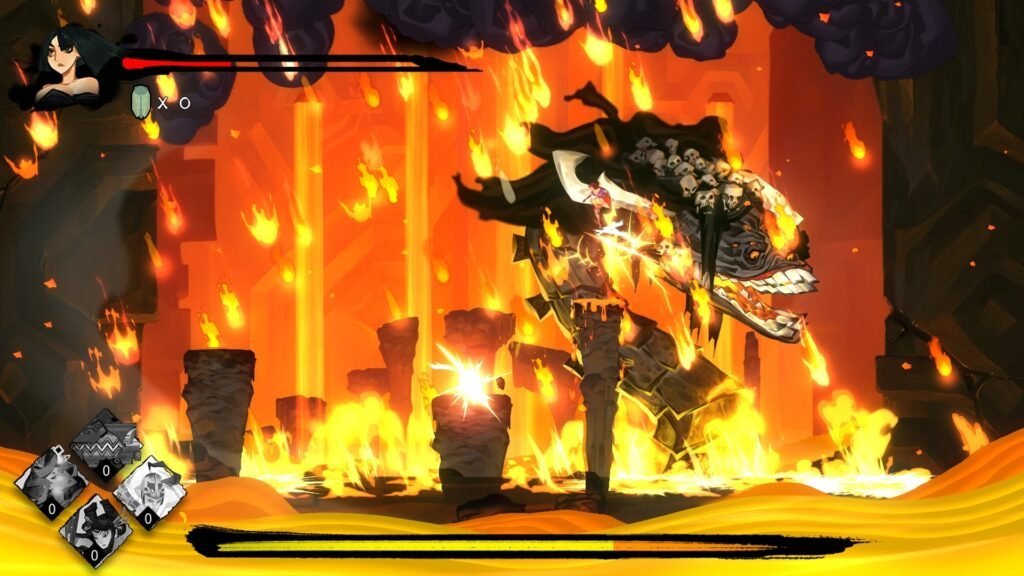 As the game is presented in the format of a 2D side-scroller there is a verticality to each area with platforms to jump or drop to that hide souls in vases, specific enemies that need to be defeated or alternate pathways. Traversal is well executed with a very generous double jump and the evasive move that acts like a dash while in mid-air. Throw in the likes of levers and mechanisms and Bladed Fury is quite the layered experience. 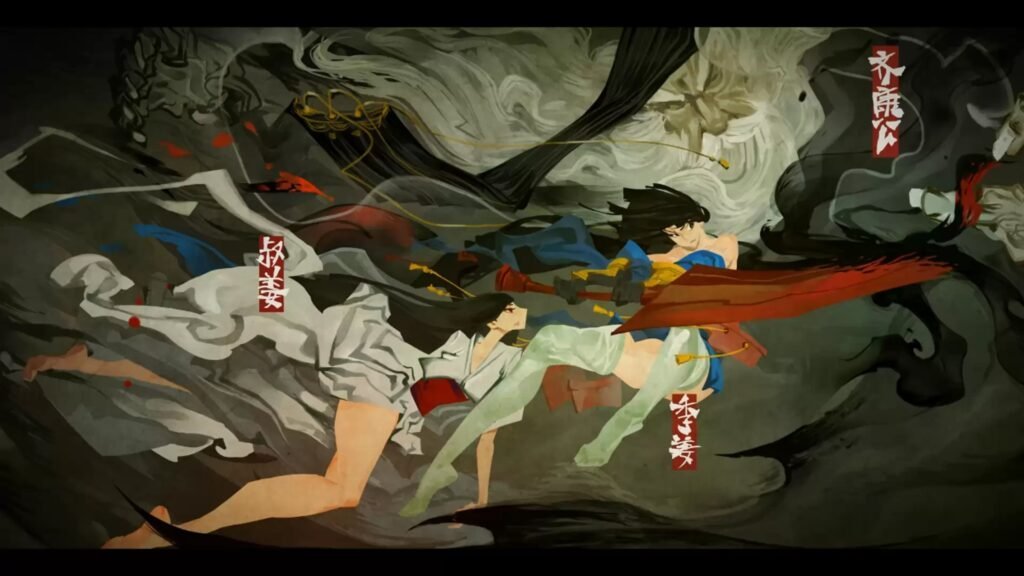 Visually speaking Bladed Fury has a lot to say. Its extremely stylistic art design is striking, clean and at times gorgeous. The enemy designs are fun, and the locations are varied and oozing in oriental charm. With no cinematics as such the story is told through a visual novel like format with text accompanying a visual of the speaking character. Almost all of the women are very sexualised with their breasts all but bursting out of their garments in very distracting and awkward fashion. These provocative visuals undermine the strength of these women and the power they put on display throughout. 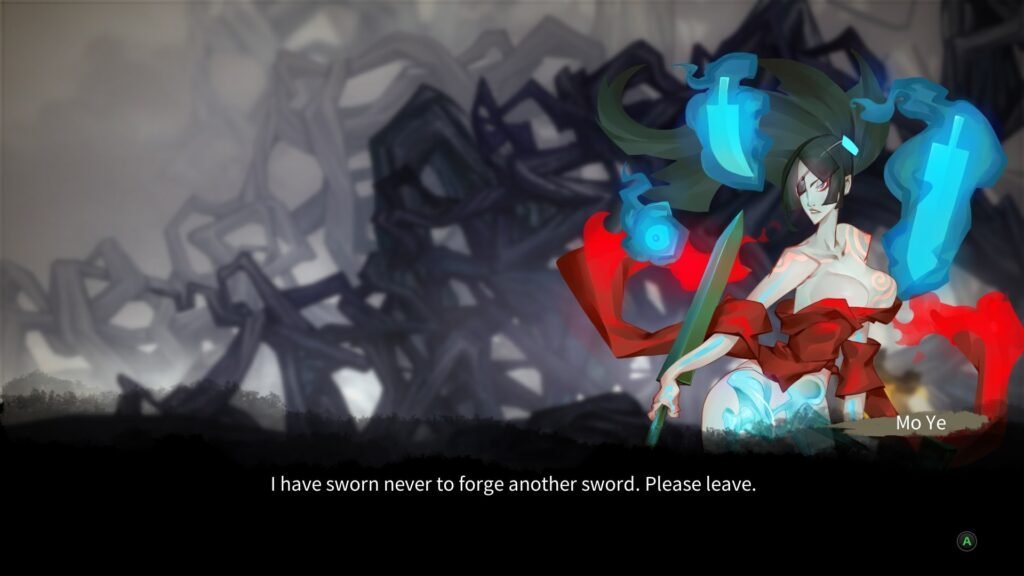 The score is befitting of the world of Bladed Fury and the sharp, quick sound effects keep the overall presentation consistent and energetic.

Aside from the several near wardrobe malfunctions there is no other content that would make this inappropriate to play in the presence of children. All of the dialogue is in Chinese with English subtitles too, with no profanity to be found. 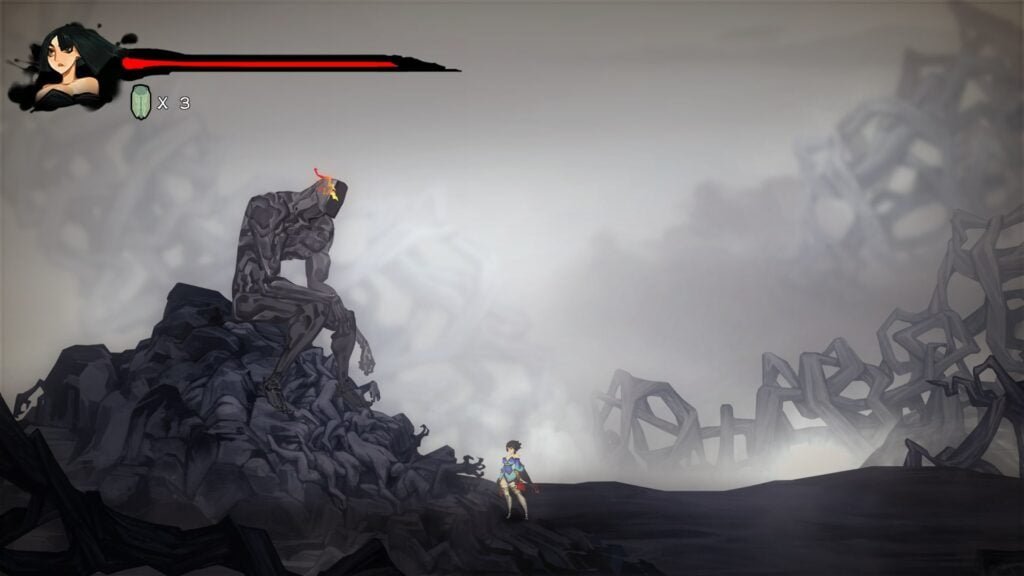 Bladed Fury looks great and plays well but lacks in the enjoyability of the experience. The gameplay is simple and accessible enough, it’s just not particularly fun. Luckily the handful of puzzles, platforming sequences and surprisingly enjoyable boss battles add variety to an otherwise button mashing affair set to the beat of a rather uninspired story. 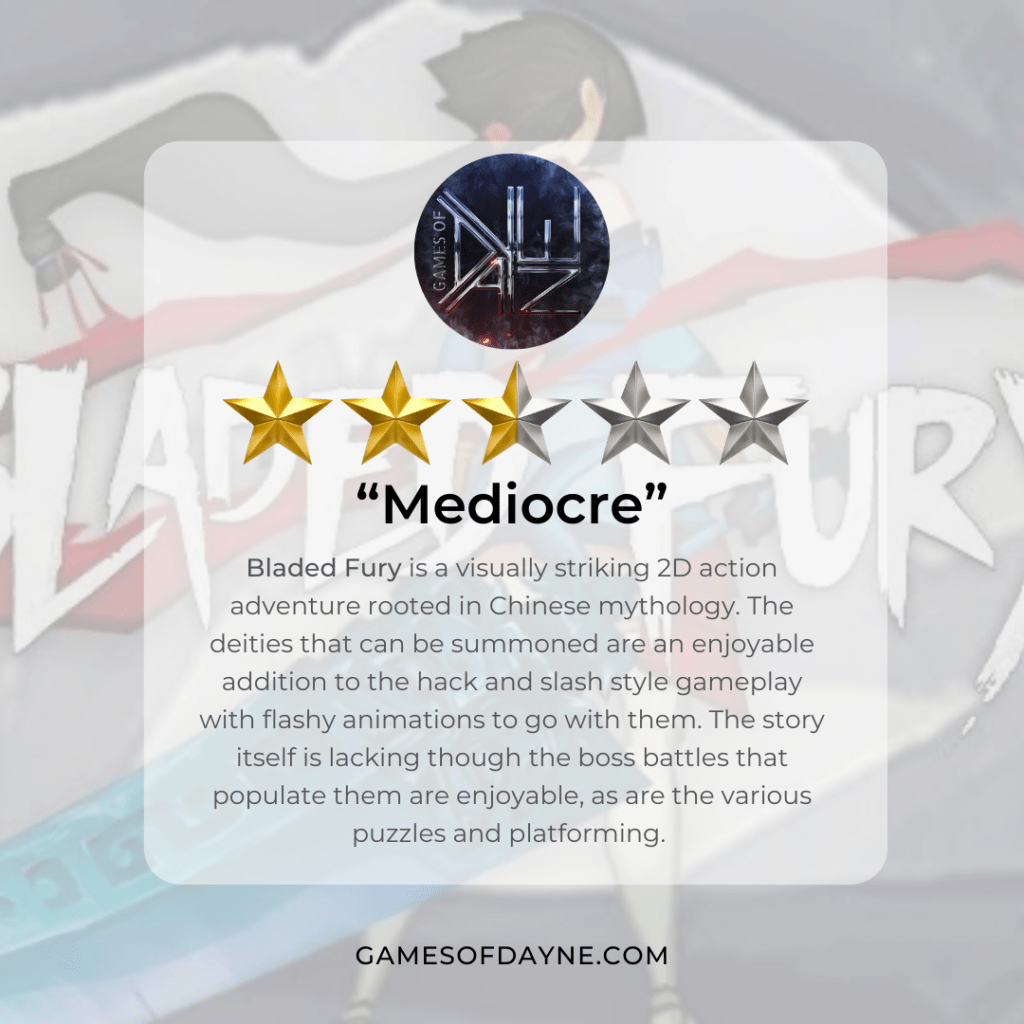 Developed by: NExT Studios

* A digital code was provided as a team member of One More Game and Xbox Gamer Dad for the purpose of this review. *