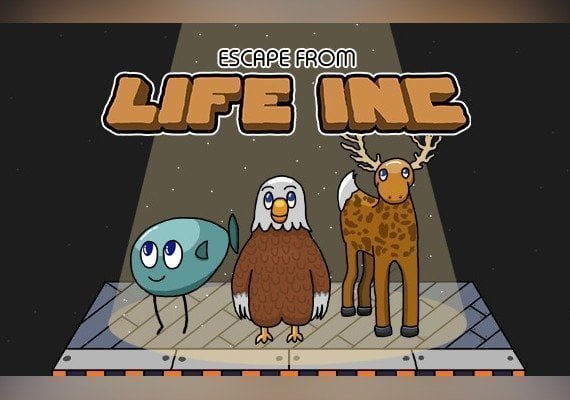 Escape From Life Inc. takes the player on a platforming puzzle adventure with three animals abducted by a UFO with the intent of experimentation. Bob, Rick and Ern, a fish, reindeer and bald eagle respectively, must be switched between and their abilities taken advantage of to solve puzzles and escape from the alien lab known as Life Inc.

Full of quirky characters and misfits along the way, this world is the weird and wonderful creation of a 15 year old developer. Each of the three playable characters bring something unique to the table in terms of gameplay and contribution to puzzle solving.

Bob the fish can swim and thanks to the alien experiments can use his tiny little legs to run around on land and jump. 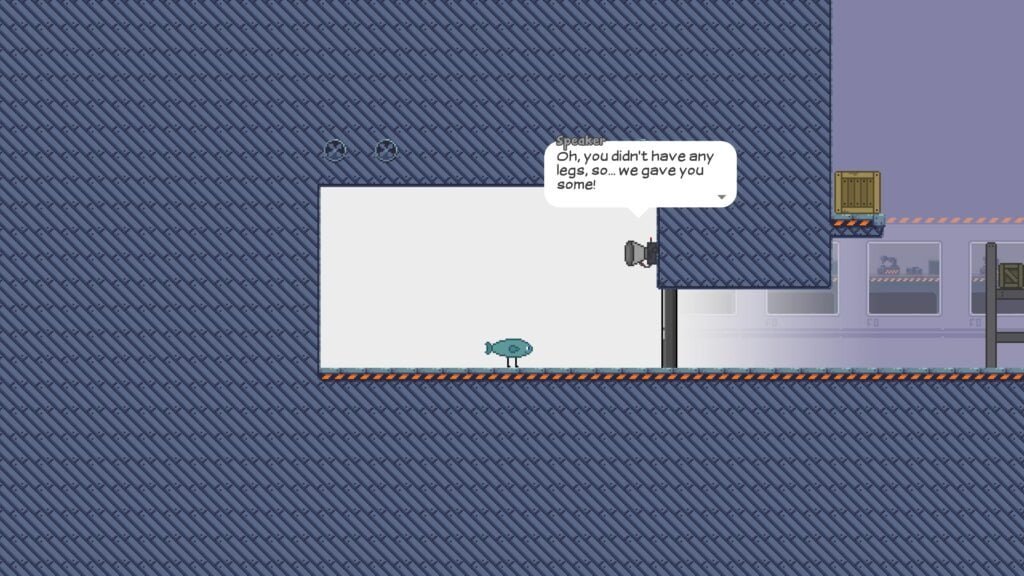 Rick the reindeer, rejected from Santa Claws’ reindeer school can also jump as well as use his antlers to destroy crates, boulders and fragile walls for example. 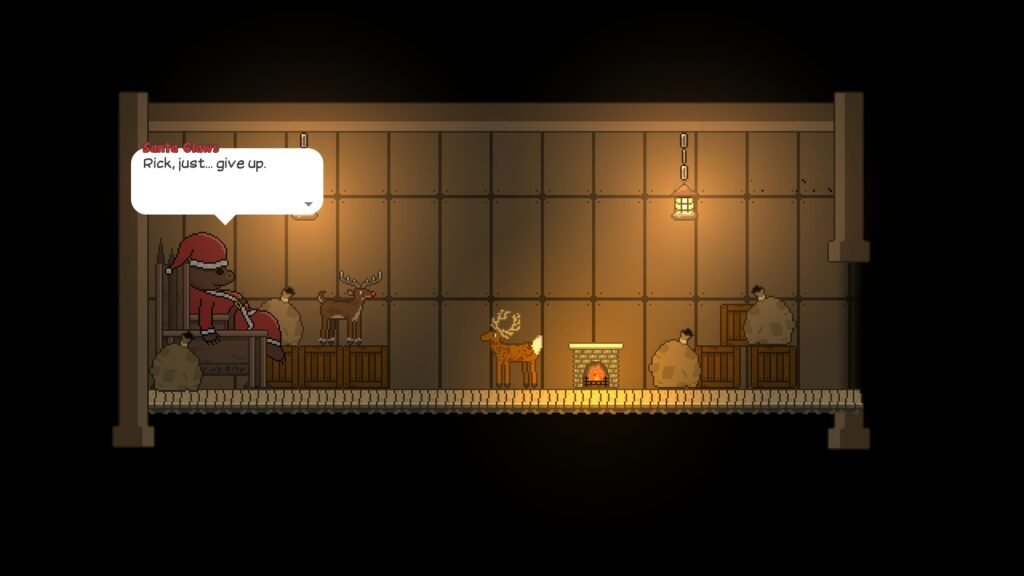 Ern the bald eagle can fly which provides the ability to take a look at the area from above and scope out which character is required where to solve the puzzles. 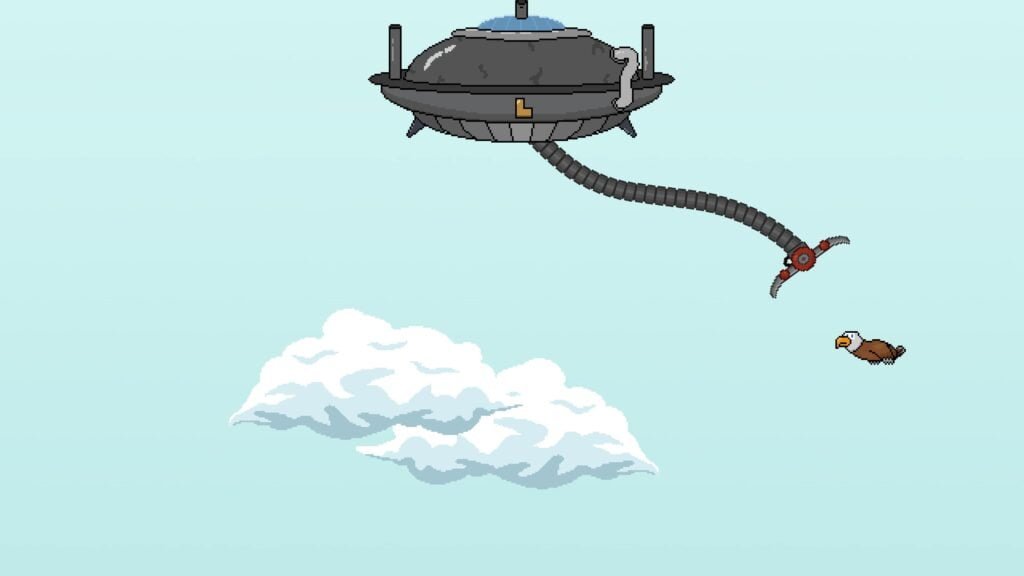 Switching between the three can be done at the press of a button and a Follow command can be issued to have the others follow behind which is both helpful and a little frustrating as they don’t know how to jump on their own, often leading them to a watery grave or being impaled by spikes for instance. 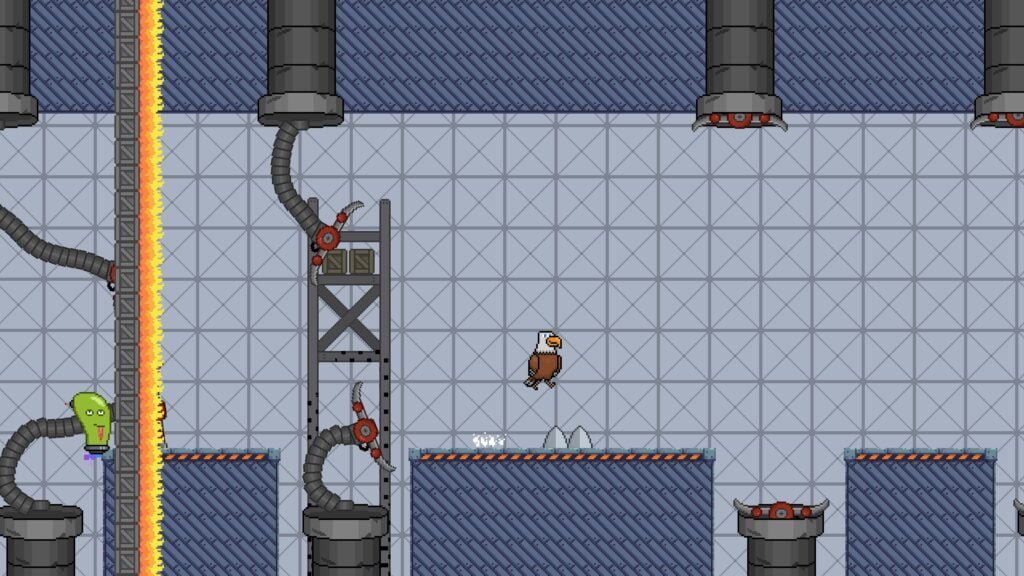 Understanding what each character can do and the order to have them do it is essential to progression. For instance, Bob is able to jump on Rick’s back to reach higher platforms but there may be a box that needs to be destroyed first or a button to be pressed by Ern to enable Bob to actually make it to the desired location.

A lot of the puzzles revolve around pressure pads, levers and opening gates but as simple as that sounds, the solutions increase in complexity with progression are admittedly quite clever. The introduction of special abilities such as wall jumping adds new dynamics to the platforming and continues to add depth to this adventure from the mind of its 15 year old developer.

To describe the wide array of animal characters scattered throughout this wacky alien zoo type situation, I personally think it’s reasonable to say that they are all weirdos. They say the most random and unexpected things which can’t help but force a chuckle. The oddities that inhabit this world are very unique, unusual and for the most part pointless – which adds to their charm. 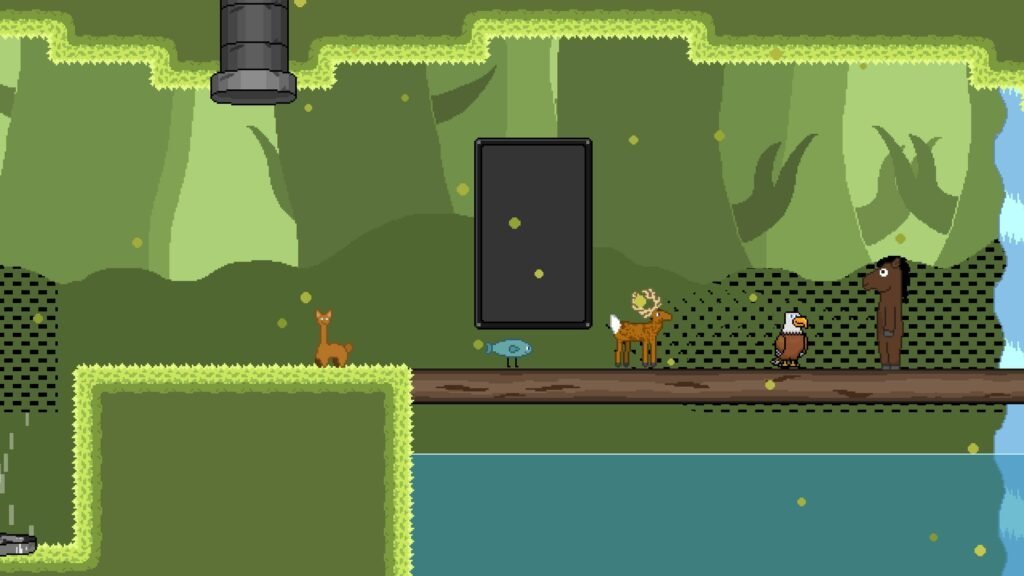 The visuals are playful and simple, reminiscent of classic titles from years gone by that have undoubtedly inspired it. One such classic title that Escape From Life Inc. feels incredibly similar to is The Lost Vikings. A trio of unlikely heroes abducted from their homeland into an alien ship where escape will only come from them working together, platforming and solving puzzles. The similarities are strong and by paying homage to such a classic title, developer PowerBurger is able to appeal to an audience that has existed for decades while putting his own spin on it. 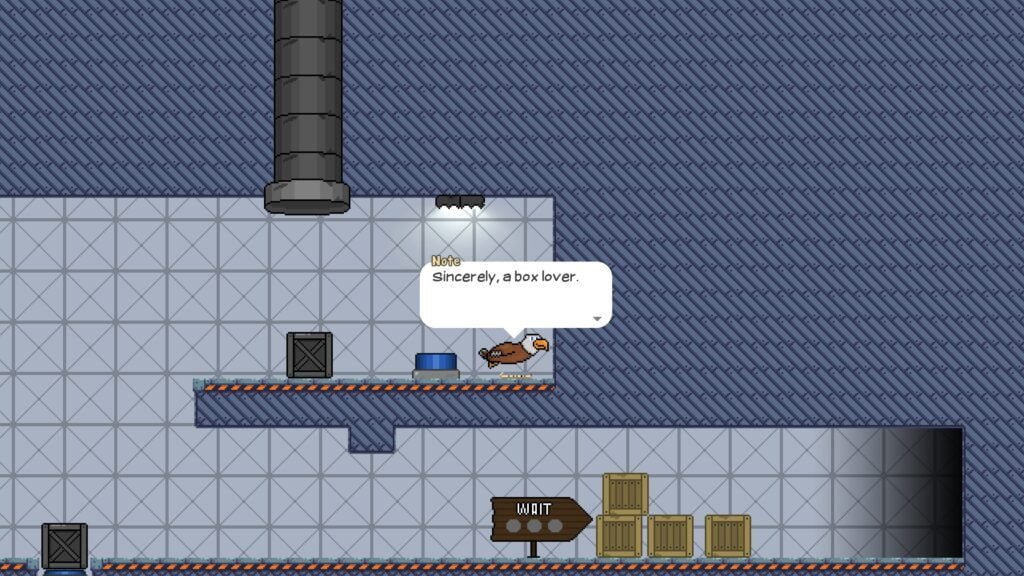 The sound design is old school which is fitting for a title that would have felt right at home in the 90’s. The music is light, the sound effects have that delightful ring to them and lends to an overall pleasant presentation. 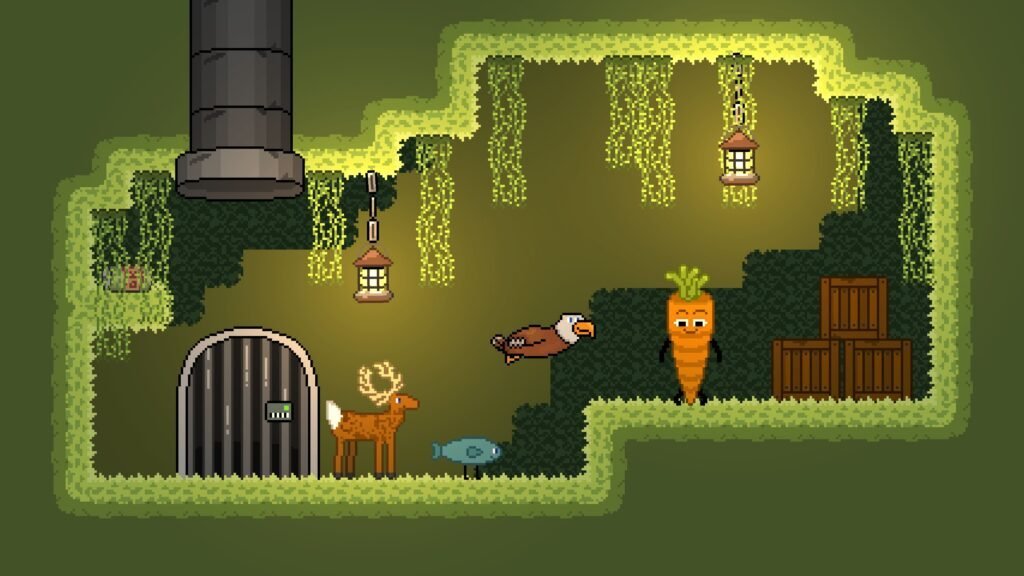 Escape From Life Inc. feels like a classic title from yesteryear and the fact that it has been developed by a mind so young is mind blowing. This trio of unlikely friends take the player on an adventure the whole family can enjoy. Coming in at as little as two to three hours this bite sized platformer is worth a play. 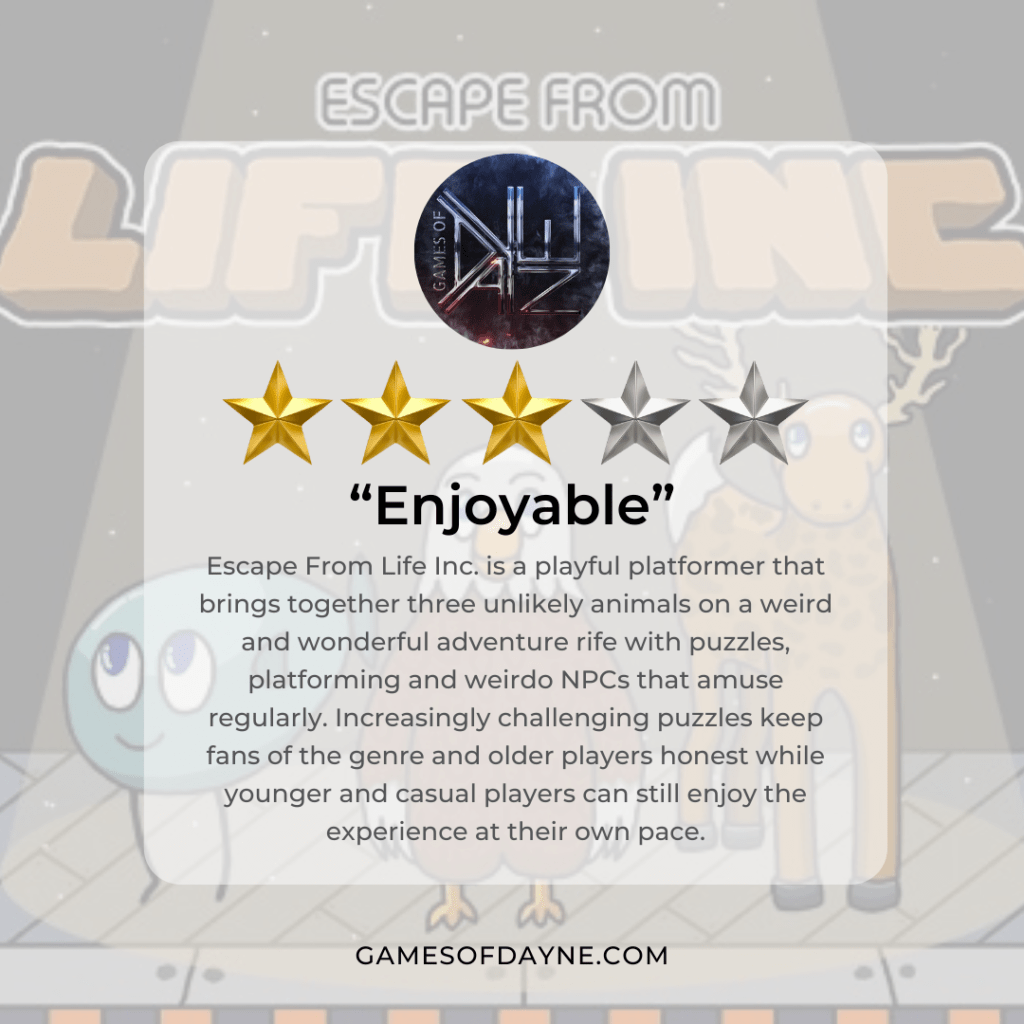