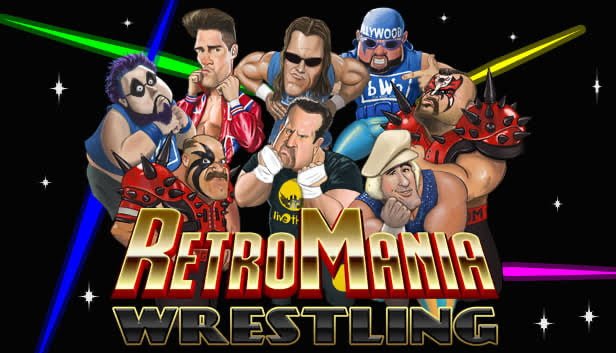 RetroMania Wrestling may have launched in 2021 but it has the gameplay, presentation and feel of a late 80’s/early 90’s arcade game – and that is by design. Older players that may remember or have played the classic titles of the past will feel right at home picking up the controller and jumping into the mayhem as a well curated roster of some of wrestling’s biggest names. RetroSoft Studios are proud to claim RetroMania Wrestling as the official sequel to the iconic 1991 WWF WrestleFest, beloved by wrestling fans even to this day.

There are four unique game modes on offer in RetroMania Wrestling, each offering a different type of experience for players: 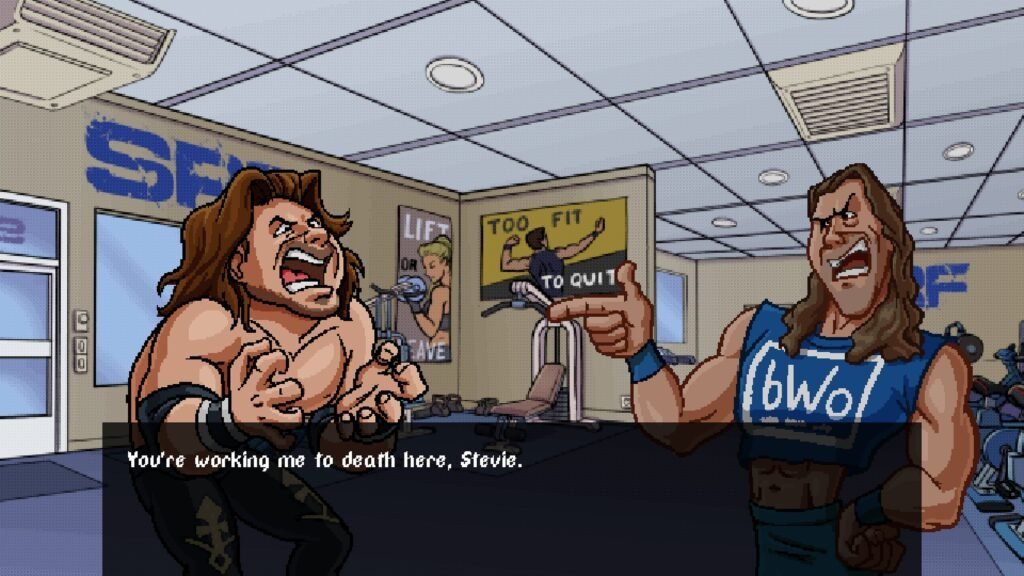 Simplistic in its layout, RetroMania Wrestling is very accessible for players to jump into whichever mode they wish to play and easily and quickly set up a match. Brief entrance videos precede the match before the ring announcer introduces the wrestlers and the stipulations of the match. These can be skipped if players are eager to just jump in and start getting wild in the ring. The brevity of these sequences is a nice change of pace from the typical wrestling titles that are long and drawn out to replicate the entrances of the superstars in real life. RetroMania Wrestling wants players to be able to get going with little time spent on getting into the action. 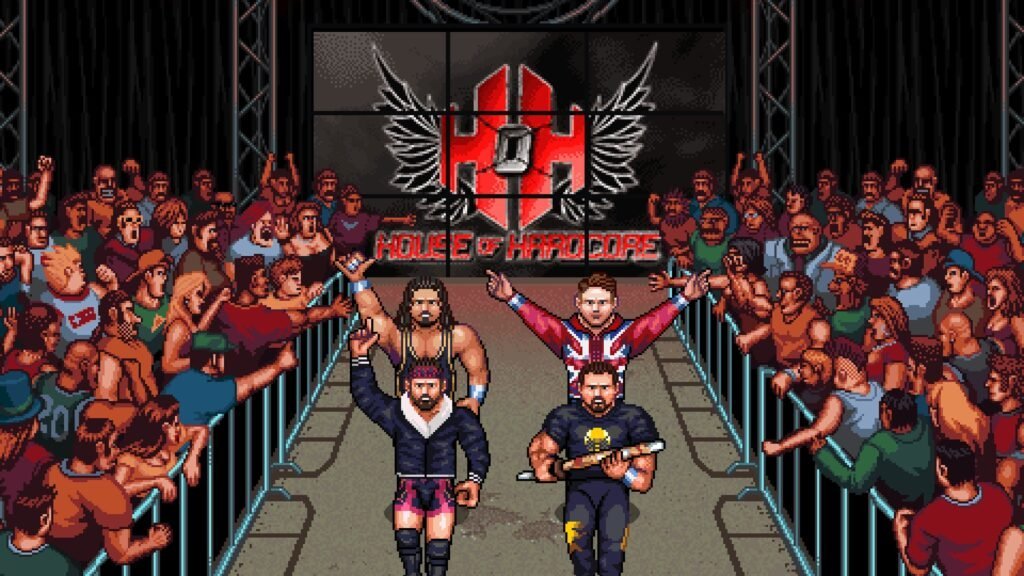 The action itself couldn’t be much simpler. There are weak, medium and strong melee and grapple attacks, as well as running variations of each. Every wrestler has a health bar and a momentum bar and which moves can be used are dependent on the latter. For instance, players can only use weak attacks until they fill one bar, opening up the option to introduce medium attacks into the mix until filling the second bar, allowing strong attacks to be used. When the third bar has been filled it will begin to glow, indicating that the finishing move is available to use, delivering a powerful attack that may put an end to the match. The momentum bar fills generously and can be aided by performing taunts while the opponent/s are down, however the player is vulnerable during this animation and can be attacked and interrupted. 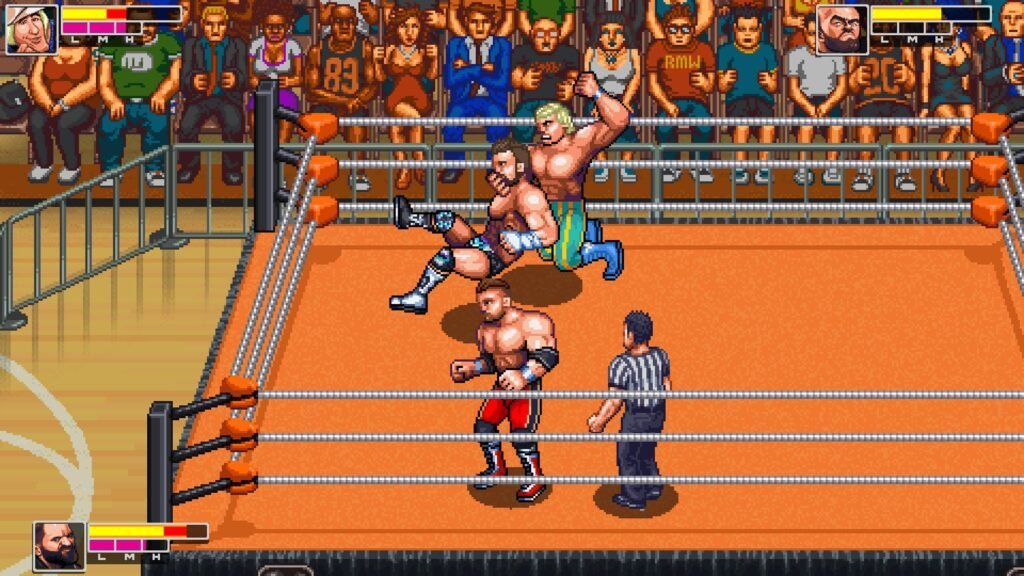 Matches are won by beating the opponent down and reducing their health bar to the point where they can be pinned or made to submit. Either scenario will lead to a button mashing affair to out-mash the opponent and put them away. Simple yet a little frustrating that a match can end based on button mashing ability instead of some kind of skill check system as seen in other titles. This can be overlooked however as it is an authentic system when compared to the titles that inspired it, particularly its 1991 predecessor. Alternative win conditions such as victory via count-out, with the opponent not coming back inside the ring before the referee reaches a count of 10, 15 or 20 as per the available options. If time limit conditions have been imposed by the player the match may end early before a clear winner can be determined. 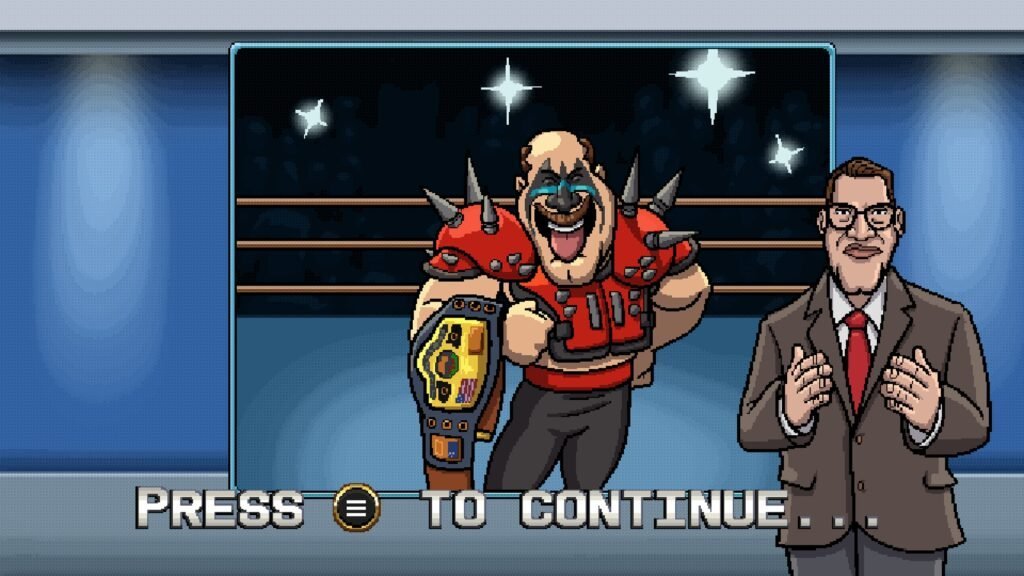 Packing a tight roster of 16 wrestlers, some may be known to casual players from their time in the WWE (World Wrestling Entertainment), TNA (Total Nonstop Action)/iMPACT or the now-defunct ECW (Extreme Championship Wrestling) while some may only be recognisable to hardcore wrestling fans that follow the independent circuits and lesser known companies. To a wrestling fan the roster includes an impressive array of wrestlers including legends of the past, such as the iconic “Road Warriors”, Hawk and Animal, as well as legends in the making like the British-born sensation Zack Sabre Jr. that is blowing up the Japanese wrestling scene in particular. Another fun aspect is the suite of arenas the matches can be played in. Featuring beaches, demonic compounds with heavy metal bands playing the background and even a ballroom, the latter of which extremely recognisable to fans of the old-school ECW. The arena itself, ring mat and in some cases the crowds are different, offering unique experiences when throwing down in the squared circle. 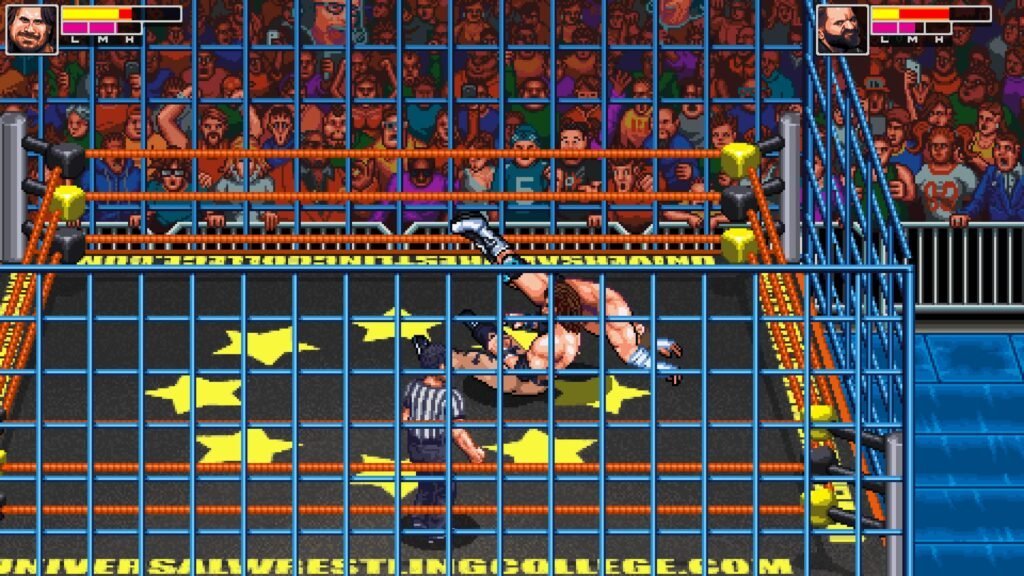 RetroMania Wrestling looks and especially sounds authentically retro. To a player that has never played these types of titles they may think the quality is leaving a lot to be desired but for those familiar with the array of arcade titles that have inspired it RetroSoft Studios could not possibly have created a more genuine experience if they tried. It’s accessible and fun for players of all ages and the inclusion of local multiplayer allows the whole family to get in on the action. A kickass soundtrack adds energy to the matches and keeps it feeling fast paced while avoiding the feeling of being a simulation experience like the WWE 2K series for example. 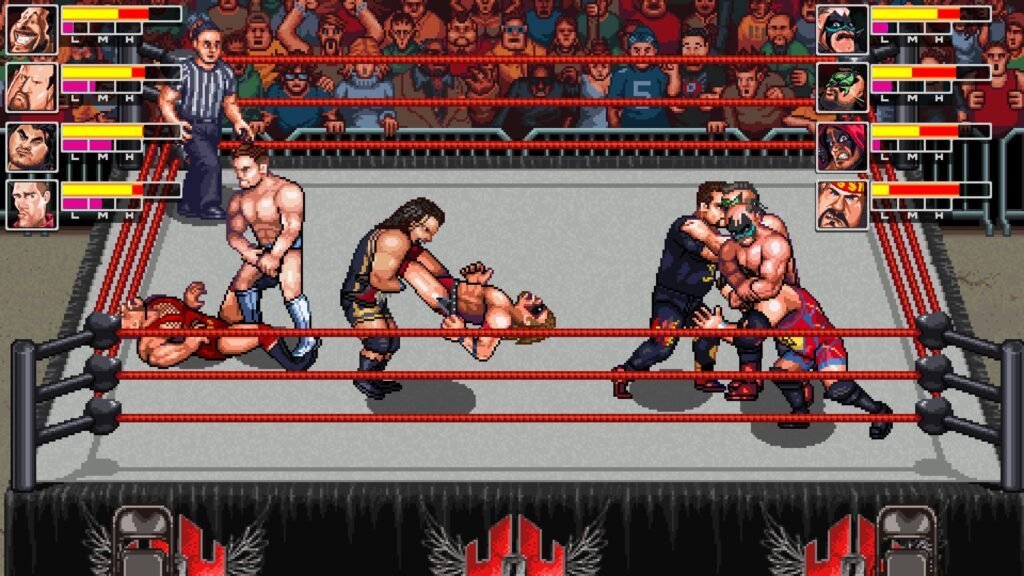 There is nothing modern about RetroMania Wrestling and that couldn’t be more of a compliment. This genuinely feels like a title you could play on an arcade gaming machine like the good old days. With a roster appealing to diehard wrestling fans and gameplay accessible to even the most casual of players, even with no wrestling knowledge as far as games or the product itself goes. As someone who has followed wrestling on television since 2003, and has played a large number of the arcade titles that have inspired this game, this is a rare opportunity to play what feels like a game from the past with legends that paved the way for some of the young and upcoming stars that can stand opposite them in RetroMania Wrestling. 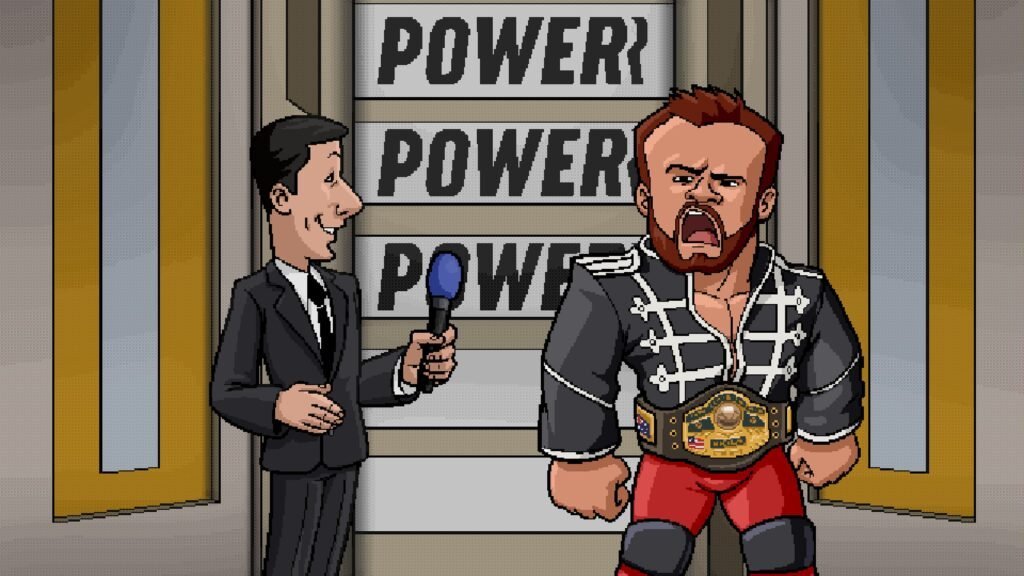 + Well curated roster of legends and independent stars in the making

– Retro gameplay can be a bit stiff

– Online multiplayer feels like a missed opportunity (though it hasn’t been ruled out!)