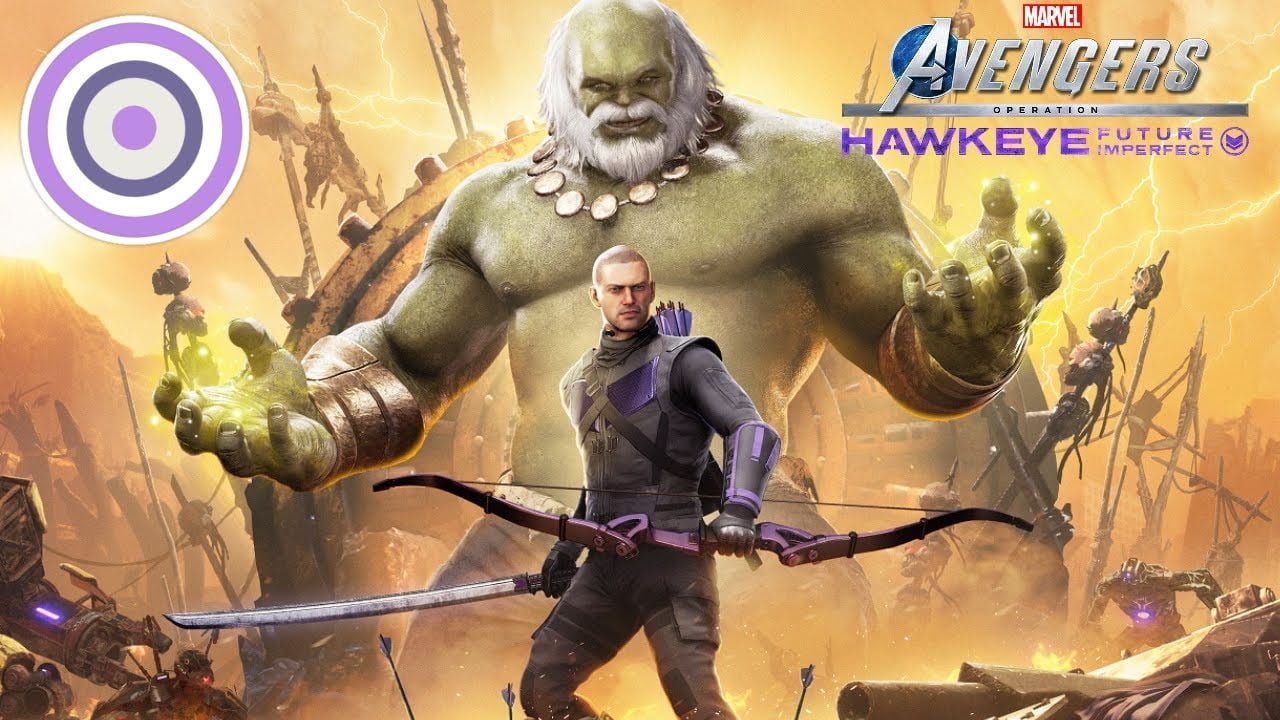 The second new hero has landed in Marvel’s Avengers. Clint Barton “Hawkeye” arrives with his own new story content in Operation: Hawkeye – Future Imperfect, as well as his own unique gameplay, abilities, outfits and Hero Challenge Card. As the eighth playable hero to choose from Hawkeye is fun to play as and experiment with though his arrival following so soon after Kate Bishop, some of the excitement of playing as Marvel’s most skilled archer feels all too familiar.

Operation: Hawkeye – Future Imperfect starts players out in the future as Old Man Hawkeye in the new playable location, the Future Wastelands. This location is visibly distinct from others not due to the crumbling and desolated setting but the overwhelming and ominous yellow glow from the sun. This tinted landscape is all but destroyed, the remnants of a war that will leave the world in ruins and the Avengers as we know them dead and defeated, leaving the world to fend for itself against the Kree invasion. 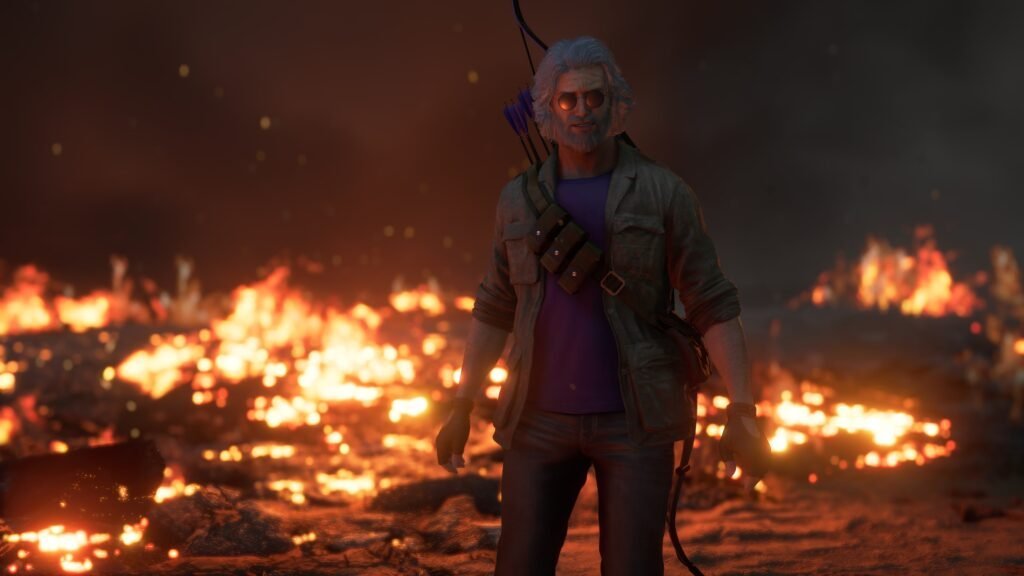 Flashing back to the primary timeline of Marvel’s Avengers, the present day Hawkeye has recovered from the events of the end of Operation: Kate Bishop – Taking AIM, joining the team as they plan to prevent the very future we as the player just witnessed from the perspective of Old Man Hawkeye. As revealed at the end of the previous Operation, Hawkeye was working with Monica Rappachini in the future to try to stop the impending doom. 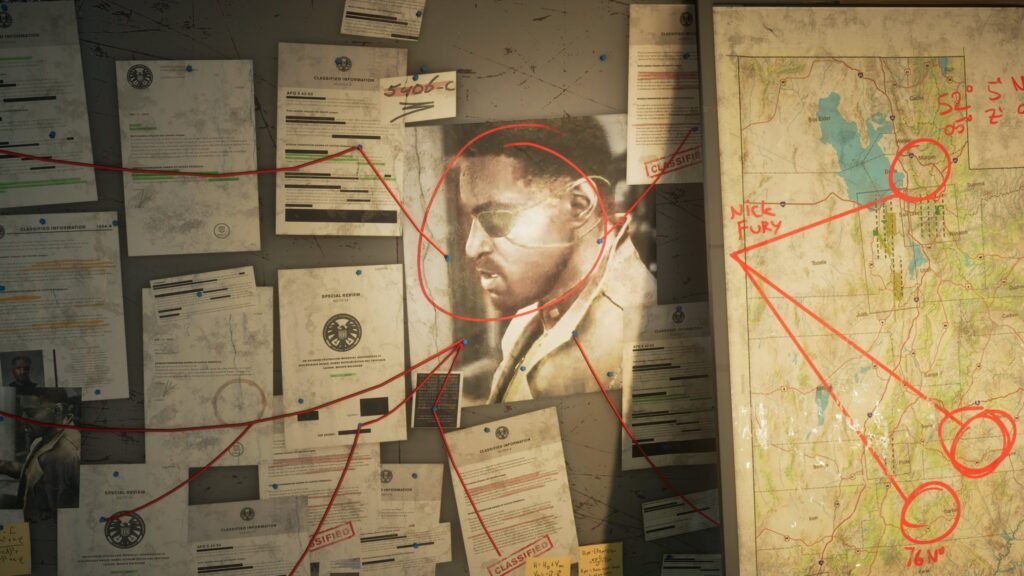 With Monica also working with Nick Fury towards the same goal, Hawkeye is the only common link between the two. Needing to find Fury before it’s too late, the team set out first to retrieve some important information from Hawkeye’s apartment in Brooklyn before setting out for three other missions in the new Future Wastelands location. 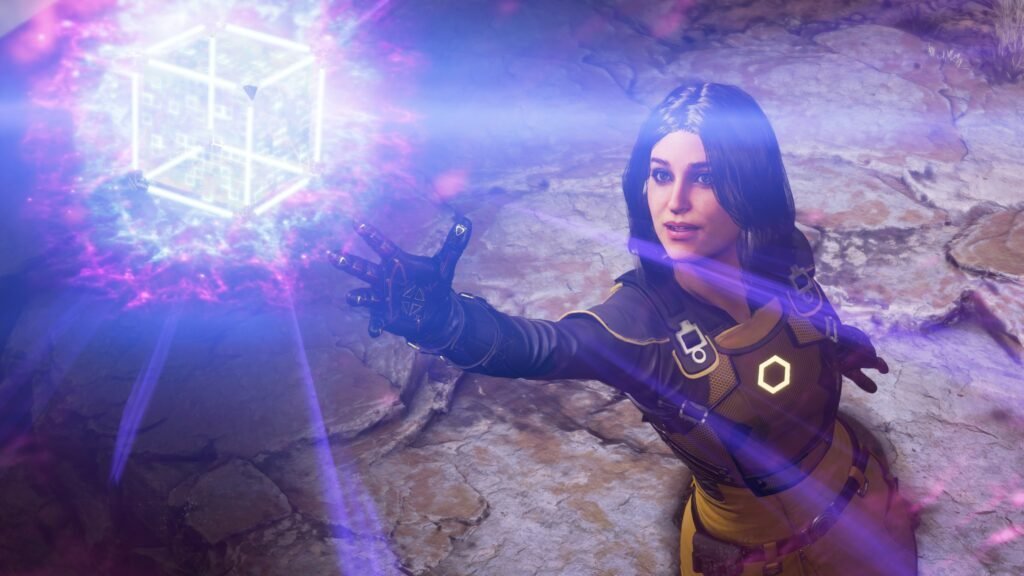 The appearance of Taskmaster was a little disheartening as even though the mission he appeared in was taking place in the future, the same Taskmaster that comprises the one half of the entire two current villains, the feeling of repetition and continued oppression of new and more exciting villains feels tiresome six months after launch. Even the introduction of Maestro, an alternate version of The Hulk, is just another Hulk/Abomination villain. 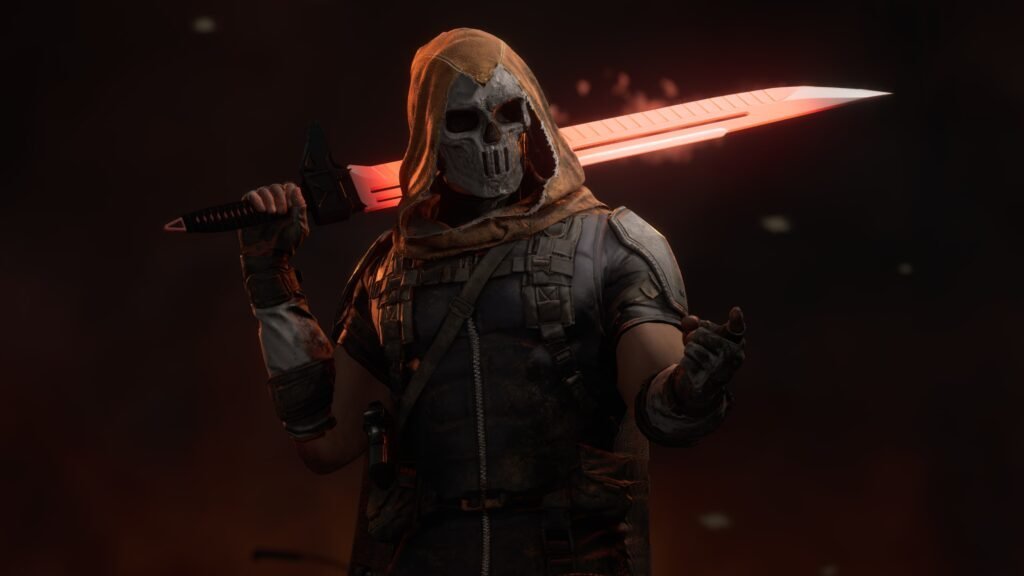 Both villains that appear in Future Imperfect are essentially present already, with Taskmaster obviously 100% the same and Maestro coming across as Abomination with a different skin selected. It is deflating as a fan of the game to see the lack of attention given to the villains that players have been extremely vocal about since launch late last year. 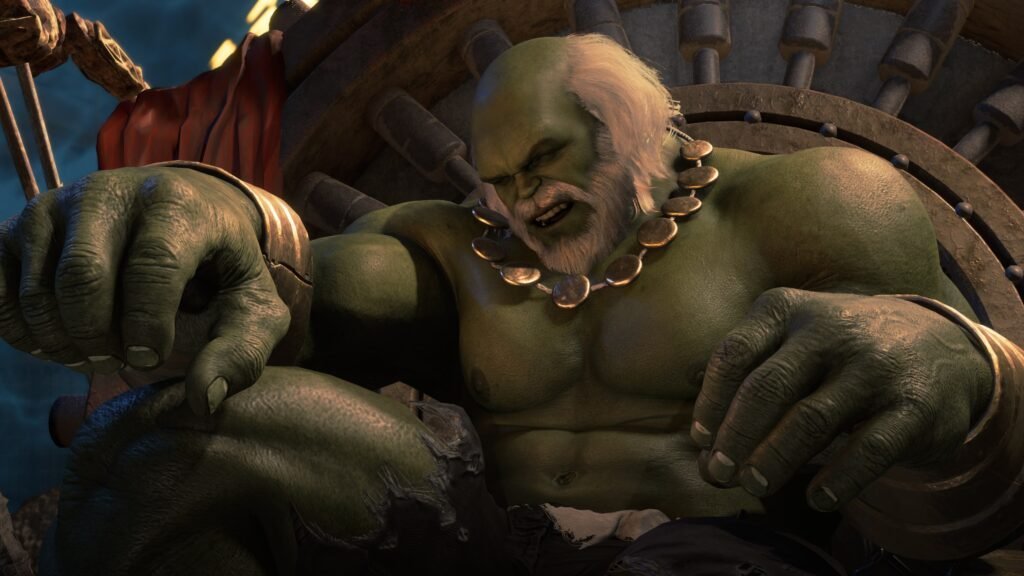 While the Future Wastelands is a new location it also feels a little too familiar to the existing Utah location from the main campaign. It’s striking visual aesthetic stands out but the environment itself feels too much like a rehash instead of an exciting new area to explore and play through the assortment of Avengers Initiative missions. As with Hawkeye himself, the new location and new hero are definitely a positive addition to the pool though the familiarity of those that have come before strips away a few layers after all the anticipation. 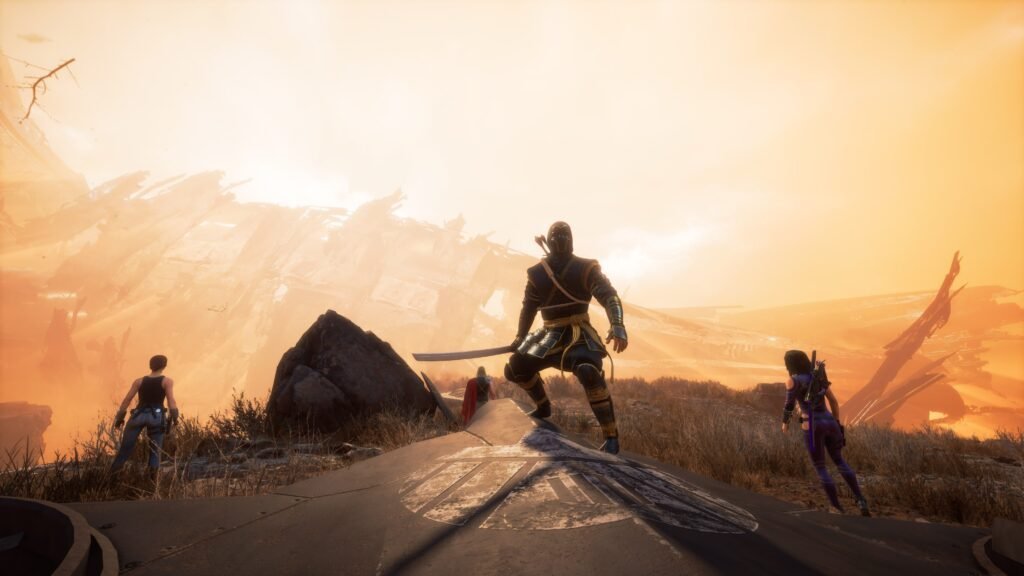 With only five missions comprising Hawkey’s mission chain that can be completed in just under an hour and a half it is worrying that so far the first pair of new Operations are incredibly short and only deliver a minimal amount of meaningful story progression. The tone seems to be set that a handful of these small Operations will build towards a particular overarching story before moving on to the next, not unlike the Marvel Cinematic Universe having a number of films building to an Avengers movie in what they termed as “Phases”. 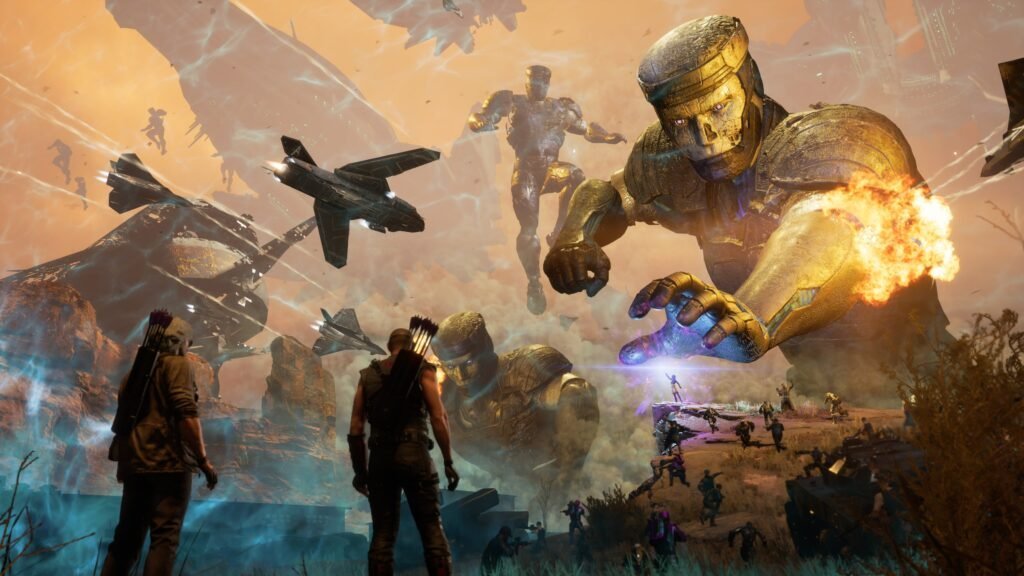 The brevity of these Operations is concerning as they act like a prologue and almost a tutorial for these new heroes before all the player has to do is run through the same missions they likely already have as all of the other heroes. Outside of the new story content there doesn’t appear to be anything to really justify casual players to continue playing as the new heroes unless they actually like them. I will personally continue to add Hawkeye into my diet to get him levelled up but once I have done so I see little reason to continue playing as him when prefer the similar, yet in my opinion superior, Kate Bishop that came before him. 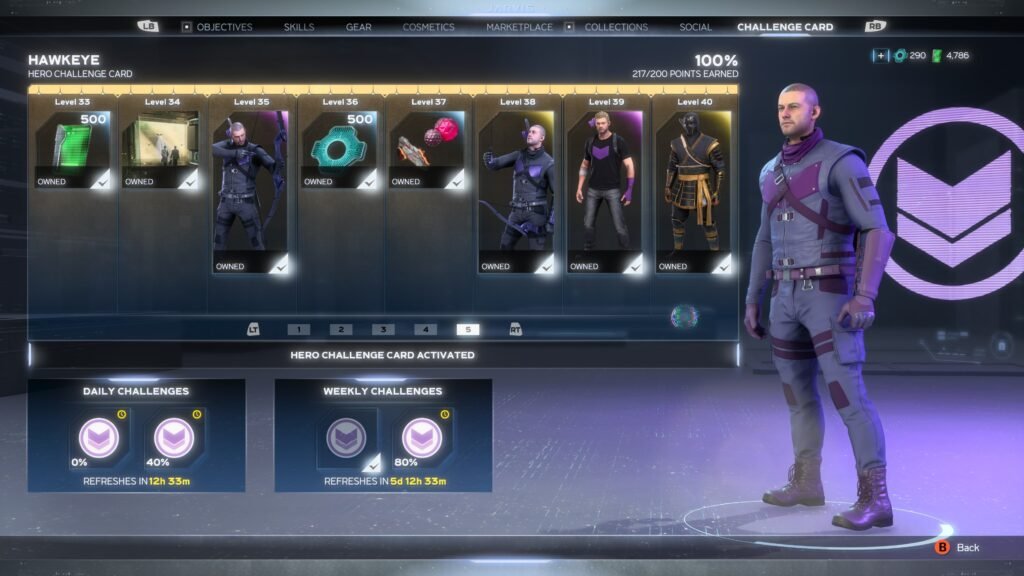 For Hawkeye to have felt more exciting I believe he and Kate should have arrived together or much further apart with other heroes launching in between. One thing worth noting and confirming is that with today’s update levelling Hawkeye up beyond level 25 to the level cap of 50 is now a longer process that promotes grinding fatigue to an already decreasingly enjoyable grind. Coming from someone who has had no issues replaying missions non-stop since launch, this increased level grind is something nobody asked for, wanted or needed. This is a player base killer that is certain to put people off bothering to level new characters up and even worse, will likely put new players off altogether. 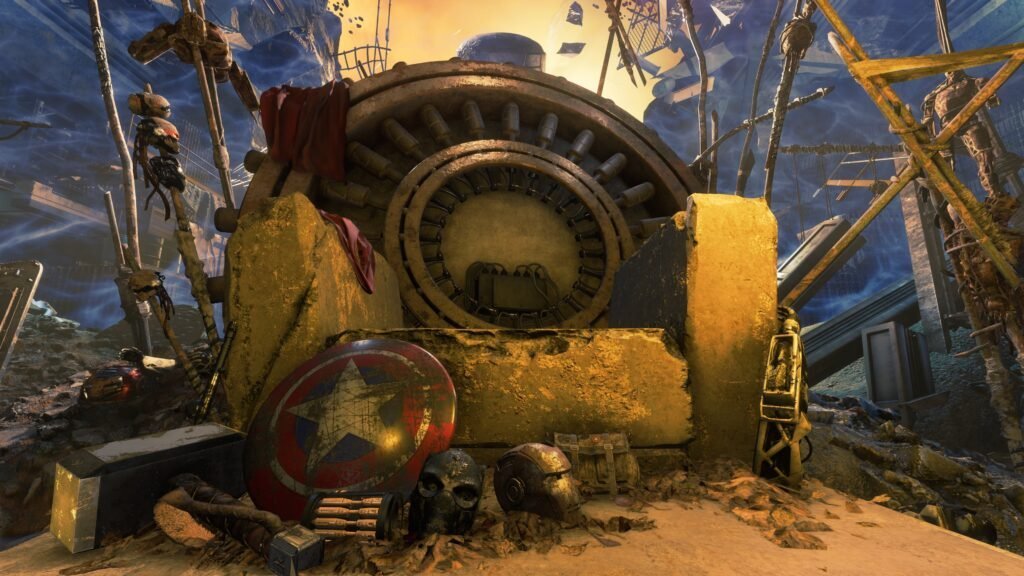 The Hero Challenge Card for Hawkeye, as with Kate Bishop and all future heroes, costs 1,000 Credits too unlock. Credits are of course the premium currency that can be purchased or unlocked via completion of the other characters’ Hero Challenge Cards. Because each hero’s Challenge Card awards 1,500 credits by the time they are completed it is possible to unlock these for free infinitely if the Credits are saved and not spent in the marketplace. Completing the Hero Challenge Cards requires the player to unlock the 40 tiers by completing daily and weekly challenges. Each tier provides a new reward, whether it’s an emote, a cosmetic outfit, a nameplate, crafting resources, takedown animations or Credits.

These tiers can also be skipped by paying 100 Credits per tier. I skipped all the way through to 40 to unlock all of the goodies immediately, also setting me up with the Credits I can use to unlock the next hero, Black Panther. The rewards for Hawkeye are really only the new outfits as far as my interest goes, no different to the rest of the playable heroes. The nameplates aren’t interesting in general and Hawkeye’s are pretty generic too and the emotes will go unused personally. The outfits are pretty cool with some sleeveless and sleeved variants of his suit in combinations of black, purple, red and a striking white design. They are all pretty cool and will certainly be rotated when I play as him to enjoy the interesting styles and to change to my overall team’s style. 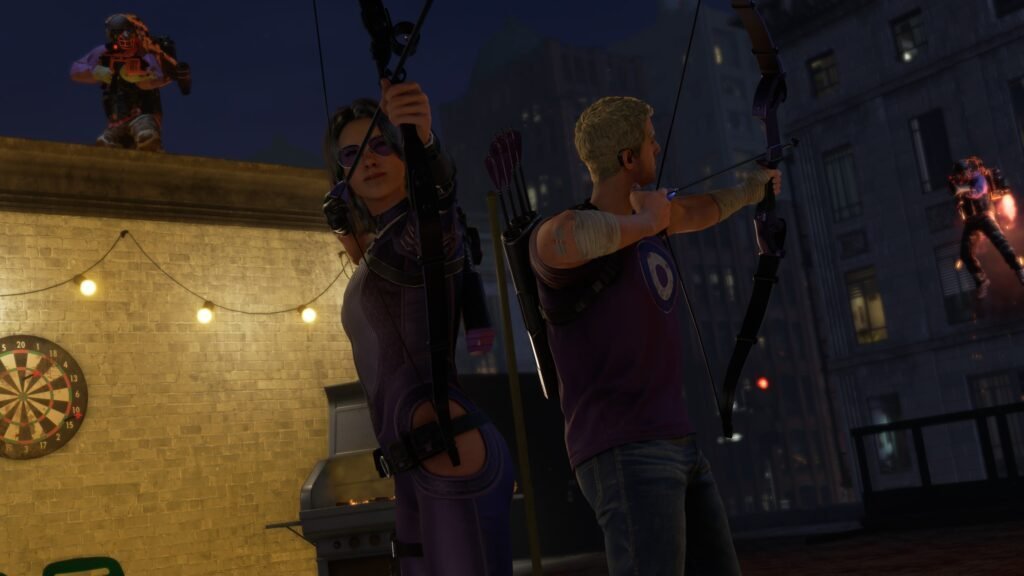 Hawkeye is fun to play as though he does feel a little familiar due to Kate Bishop’s arrival three months prior. This undermines Hawkeye’s ability to stand out and feel like a plausible alternative to the already excellent first archer in Kate. The story being set up with the pending Kree invasion is interesting though and should result in a fairly epic battle when the time comes. The looming concern is more ominous and terrifying than the Kree themselves though as the feeling of familiarity and repetition have me extremely worried that Taskmaster will play a key role. Again. 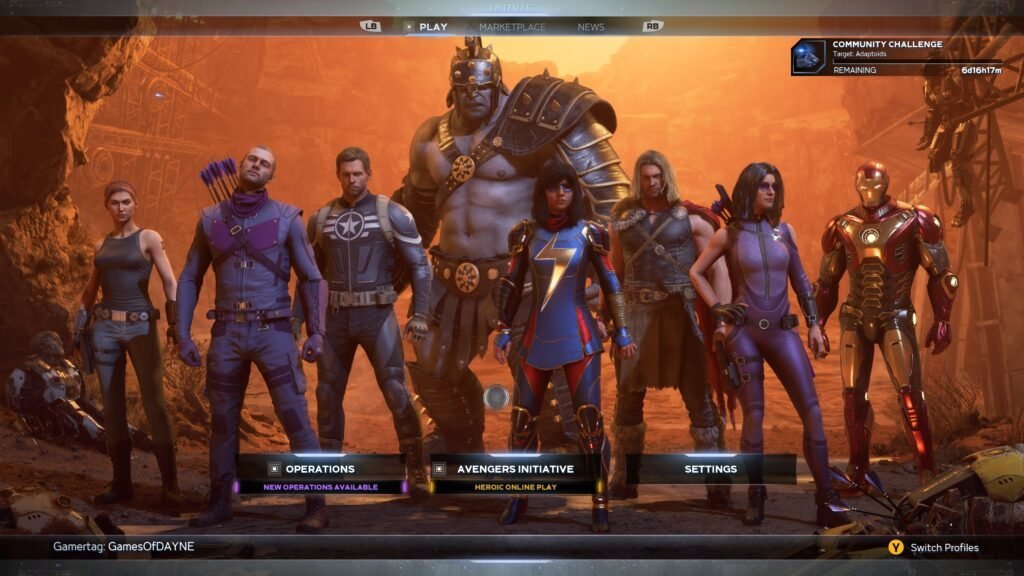 + Hawkeye is fun to play

+ Story building to an interesting conclusion

– Familiarity of Hawkeye to Kate and Future Wastelands to Utah 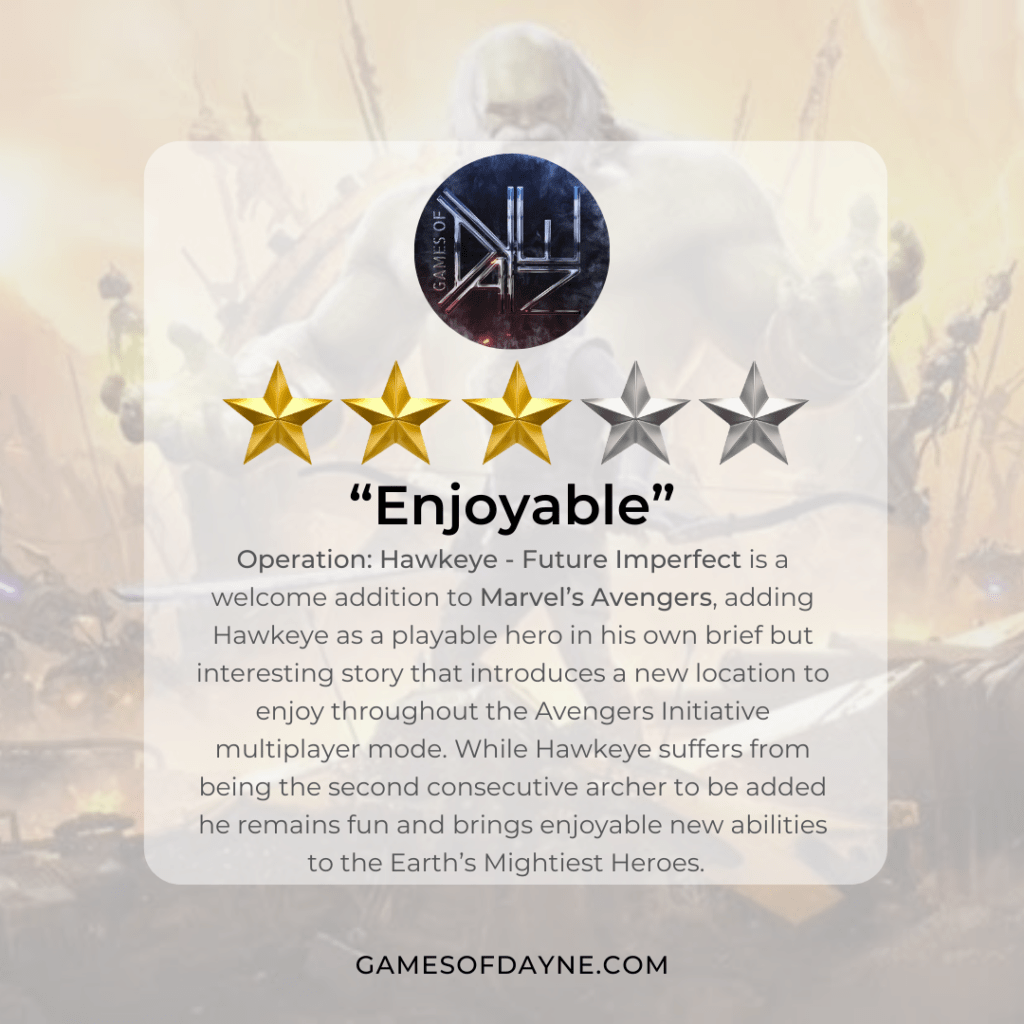