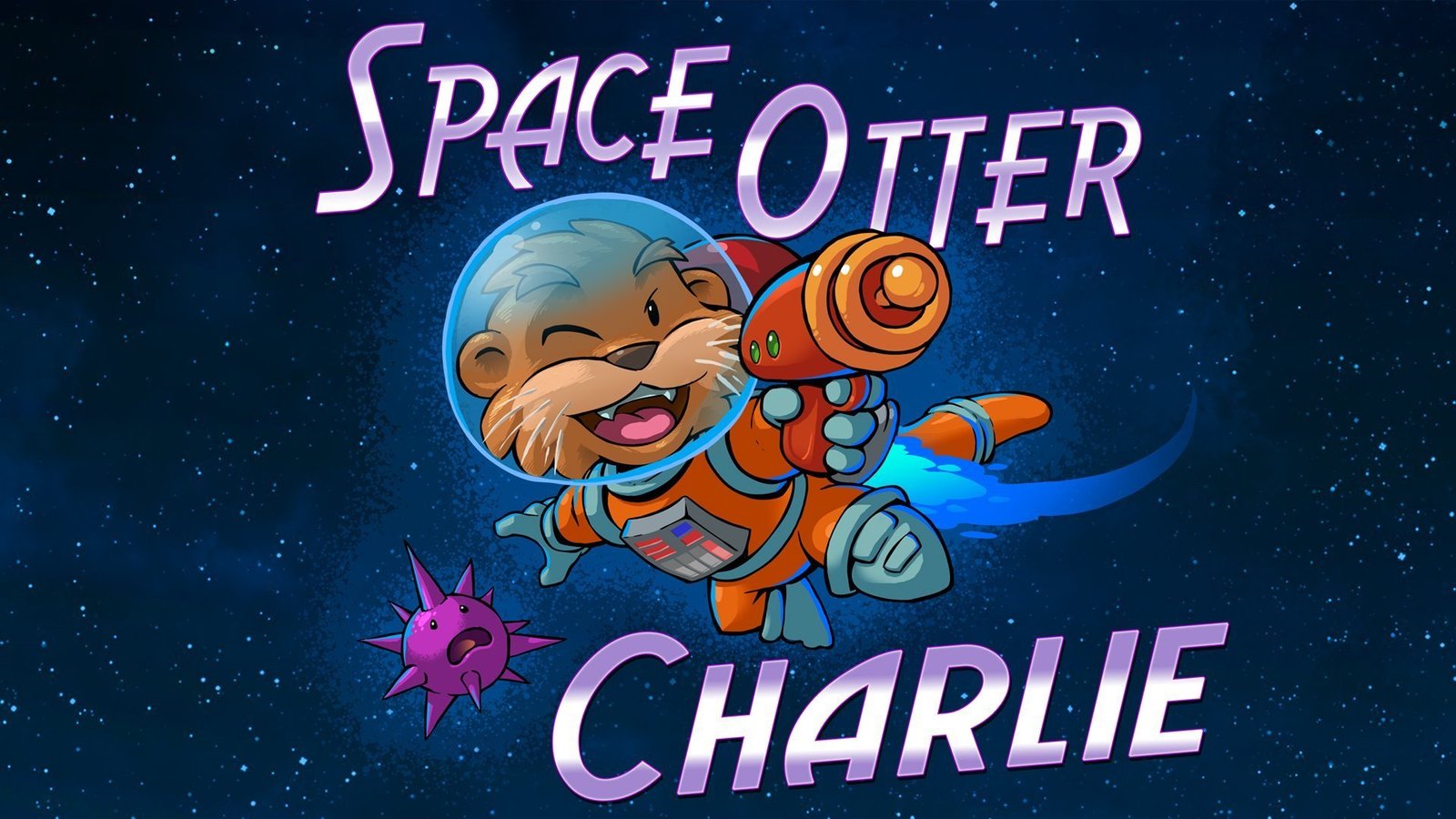 “In the 2500’s the humans just up and left.” Suffering from the effects of global warming a group of otters built a rocket to journey to the stars. The first two rockets, Alpha and Bravo failed but ultimately Charlie, their third attempt, succeeded.

Space Otter Charlie humorously follows a trio of Otters as they search for a new home. A jetpack-fueled platformer sprinkled with light environmental puzzles led by the titular Charlie is an enjoyable foray into the dangers of space travel told through the lens of an otter.

Spanning 13 missions, some of which are story related while the others are optional, the non-linear adventure sprawls out upon completion of the main missions. The advantage of exploring the optional missions is the assortment of upgrades and alternative space suits that can be found as blueprints and crafted using the various resources available. The upgrades relate to the thrust capacity of Charlie’s jetpack, his shields and the four weapons that must first be crafted. 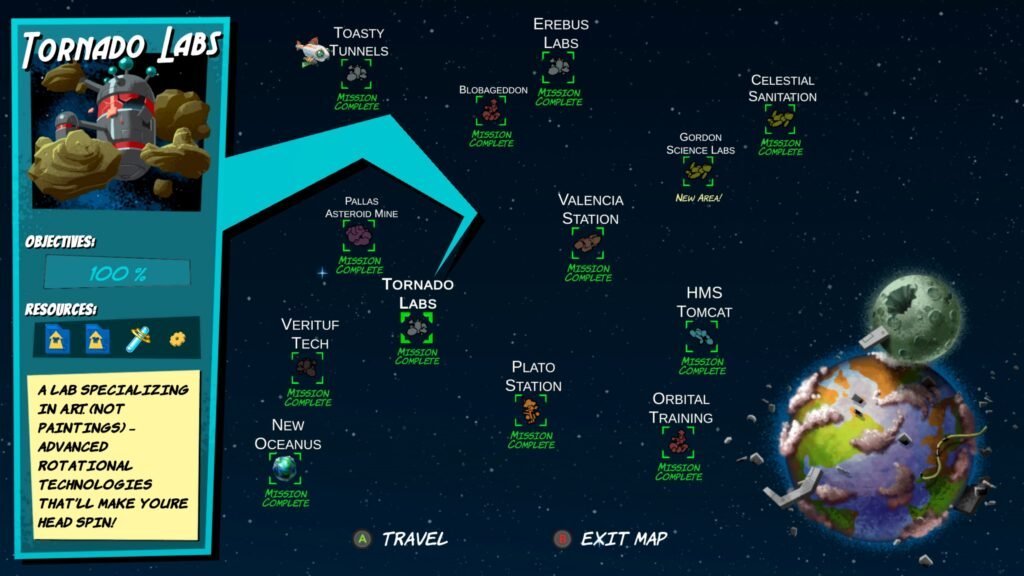 The gameplay is simple yet layered and diverse enough to avoid becoming repetitive. Charlie is able to aim in a linear direction and launch from one surface to another while also integrating his jetpack to allow freedom with directional control. The jetpack requires mere seconds to replenish after the thrust gauge has depleted and can be improved impressively via finding upgrades. 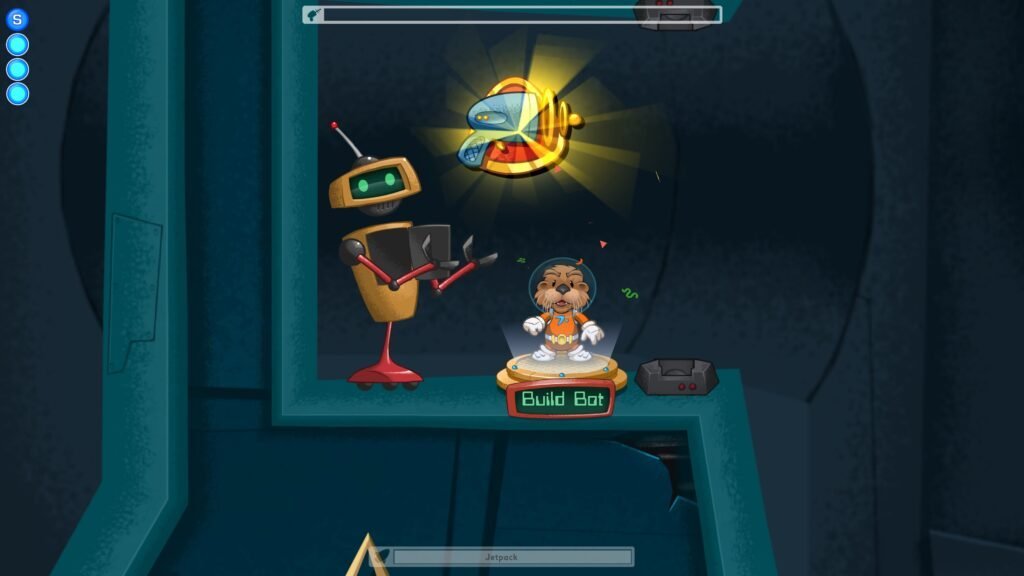 A slide mechanic is later introduced that allows Charlie to slide along a surface upon touching down on it. This allows for quicker traversal and is required to solve some puzzles that have very tight time windows. An additional ability sees Charlie charge up a spin and shoots off like a ball that can smash through obstacles and bypass some environmental hazards like fire but not laser beams. 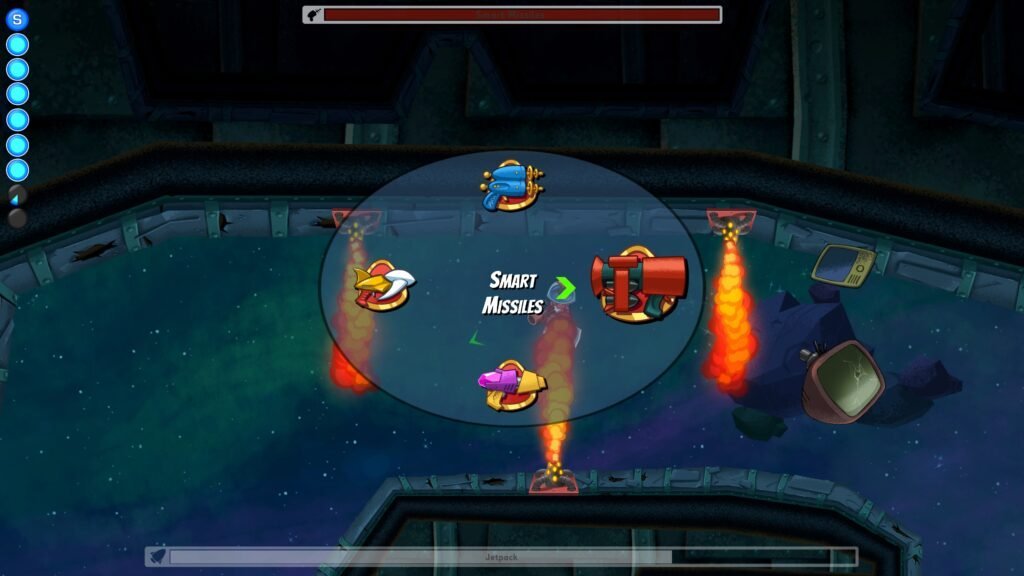 As well as the trusty jetpack, four weapons can be crafted and upgraded that each serve a specific purpose. The Basic Lazor is as described, a standard laser pistol that can be used to defeat enemies or trigger pressure pads that control doors and are used to solve puzzles. The Reflector can be used to reflect its laser beam off specific surfaces to rebound into hard to reach enemies or for triggering pressure pads. No arsenal would be complete without missiles, in the case of Space Otter Charlie these are used to destroy large boulders that stand between Charlie and progression while also delay devastating damage to enemies. Finally, the Seeker pistol’s shots will lock onto and pursue enemies. 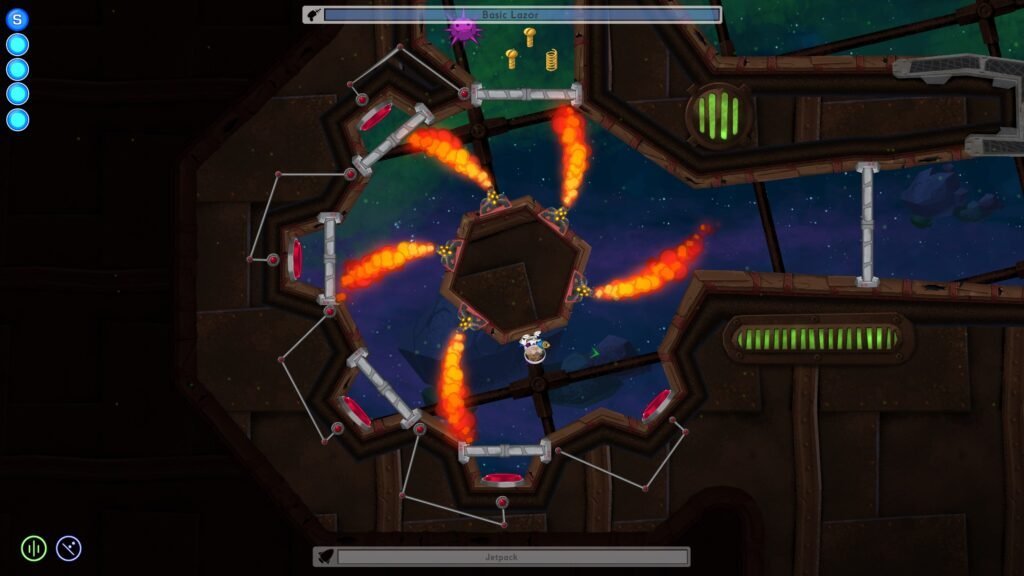 With each of these weapons having unique purposes as well as for eliminating enemies or destroying debris to clear pathways they are fun to experiment with, particularly with how they can assist with environmental puzzles. There are a handful of occasions where Charlie will need to attach to an object such as a large box and move it so that it prevents damage or death from lasers or flames for example. The object that Charlie is attached to can be directed by shooting in certain directions, altering his trajectory. Using the missile for instance will provide a more forceful push. 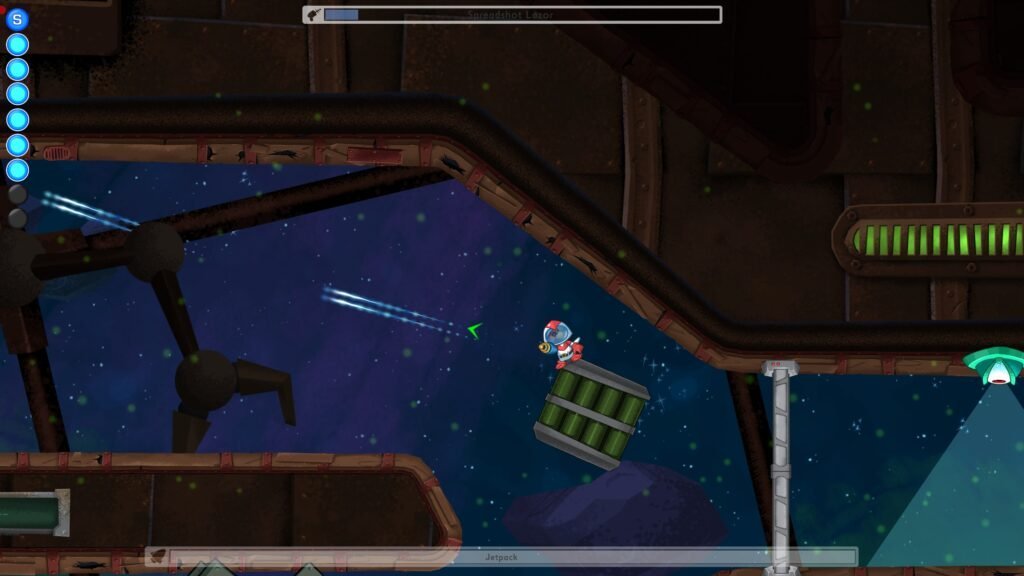 Purple urchins can be found, which when grabbed, rapidly tapping the on-screen button prompt will trigger the Mega mode, similar to a rage outburst that temporarily grants unlimited use of thrusters and rapid firing of weapons without cool down. It’s a fun element to an otherwise strategic platformer that brings that little extra to the combat encounters. 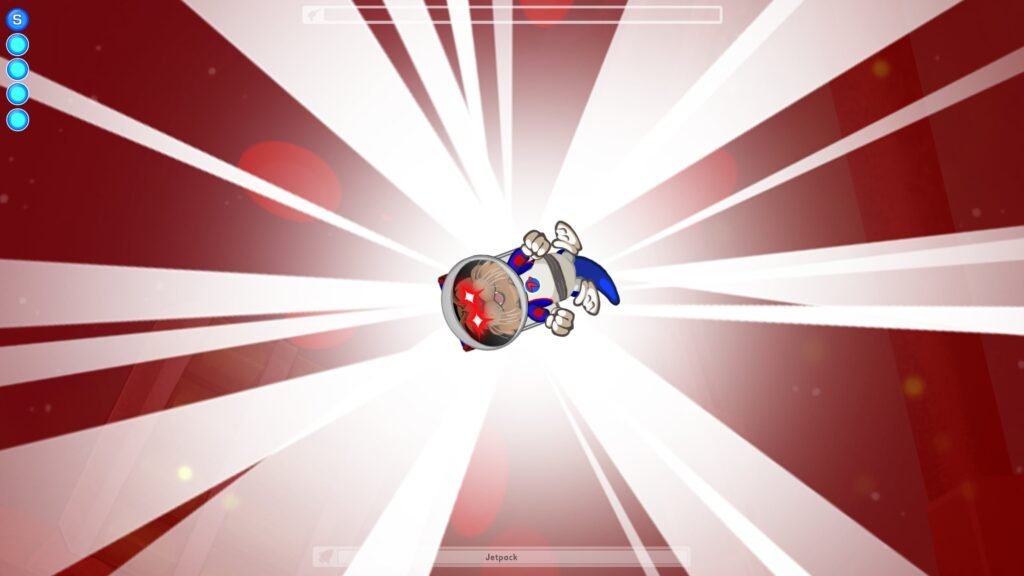 Each level is littered with blue orbs that can be collected and inside the bridge of the rocket, which serves as the hub in between levels, they can be spent to unlock “friends” that casually hang out below deck, in water… floating for no apparent reason other than a giggle. 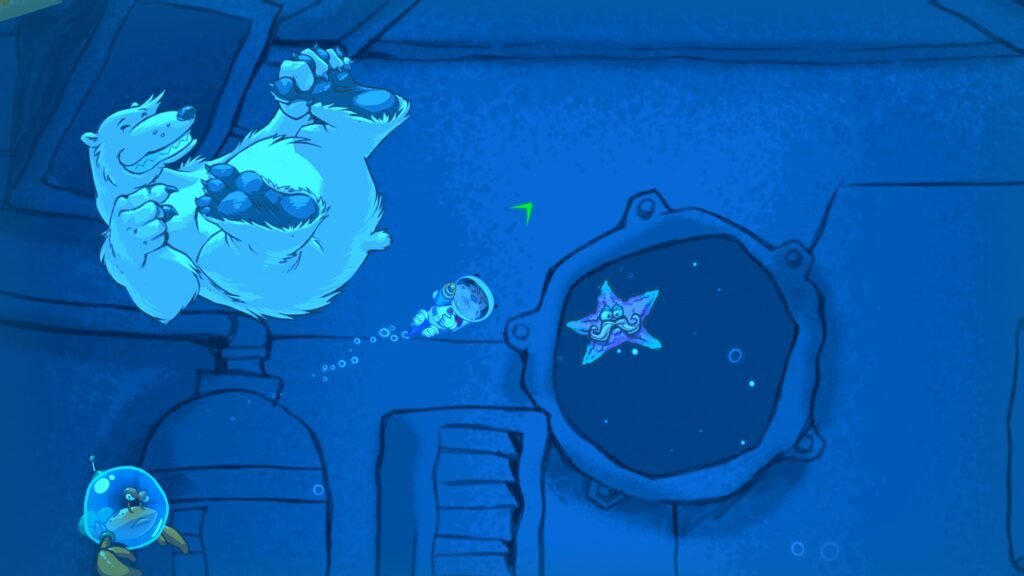 Surprisingly Space Otter Charlie offers local multiplayer for up to 4 players in the form of two modes. “So Urchin!” tasks players with breaking open the most urchins while trying to prevent opponent from doing the same. “Furry Fury” is simply a score the most kills within a time limit mode. The players are able to customise the matches somewhat by choosing whether thrust is unlimited, altering the time or kill limits and can choose from six different maps to play in. These modes are simple, short and entertaining enough to feel like a meaningful addition to the experience. 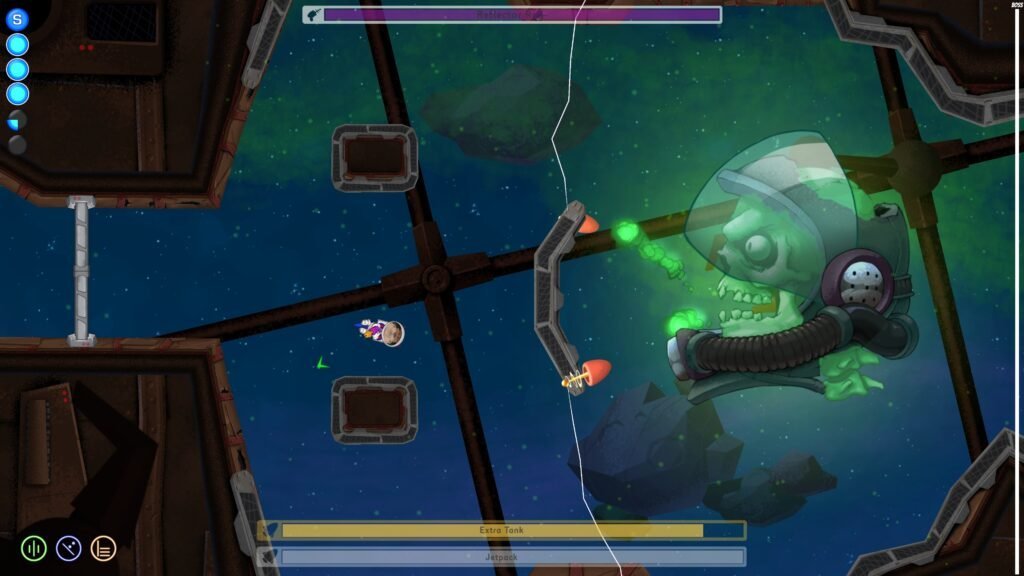 The art design is charming, light and playfully reminiscent, in regards to the character designs, of Sonic the Hedgehog. The handful of supporting characters are visually fun and interesting and the dozen or so locations are unique and well laid out. With an energetic score and appropriately light sound effects the overall presentation comes together nicely and offers a family friendly experience with a comedic narrative and character interactions. 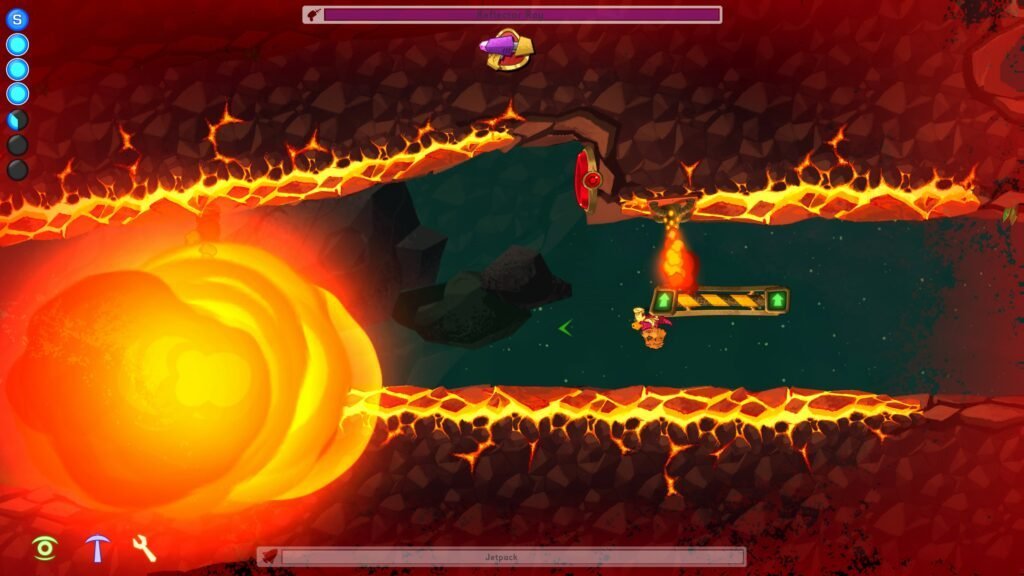 Space Otter Charlie can take as little as 4 hours to complete all of the main and optional missions, with playtime increasing for players interested in exploring every location thoroughly to find new suits and resources to craft the assortment of upgrades that can be found. The inclusion of local multiplayer is a nice touch, allowing up to 4 players to enjoy some of the otter mayhem in playful versus modes. Kids and adults alike will easily be entertained by the adventures of Charlie and co.

+ Satisfying puzzles that are accessible

– The story feels like an afterthought outside of the premise 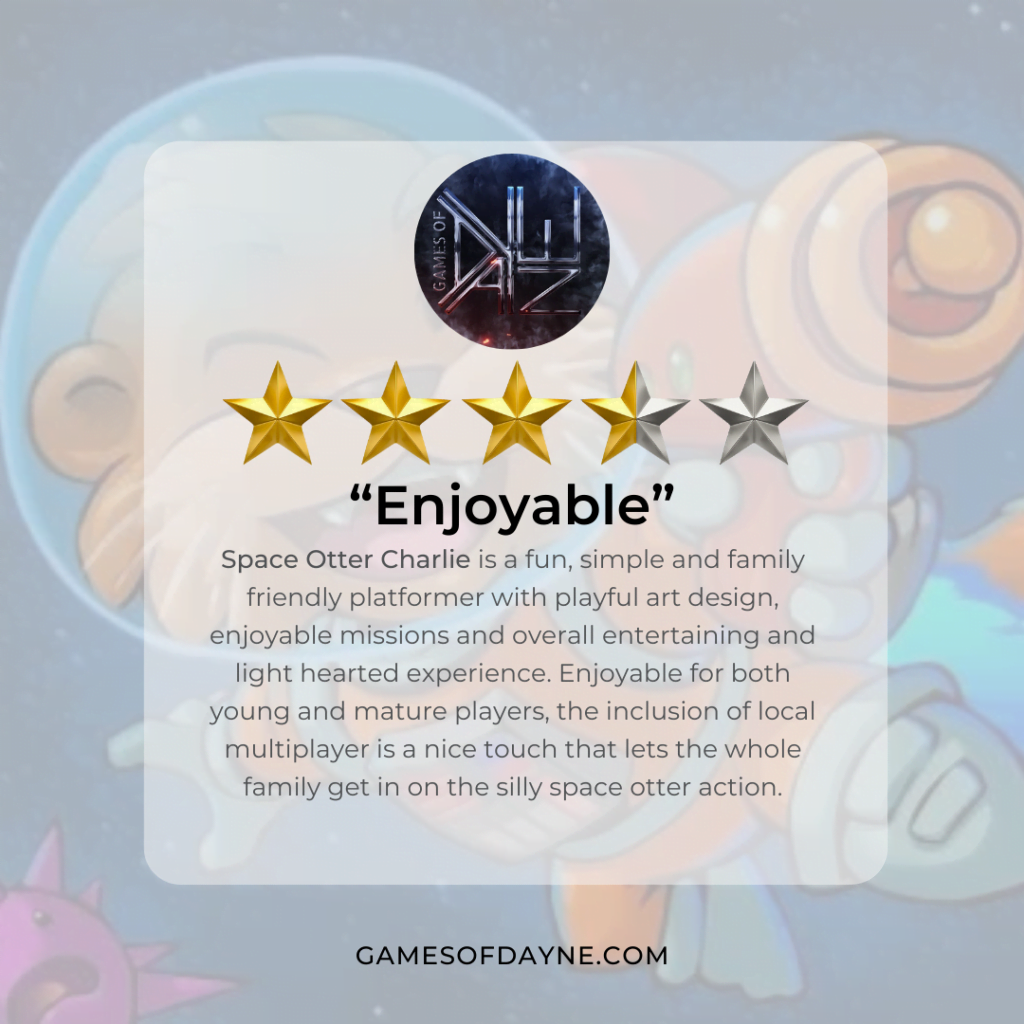 Published by: The Quantum Astrophysicists Guild