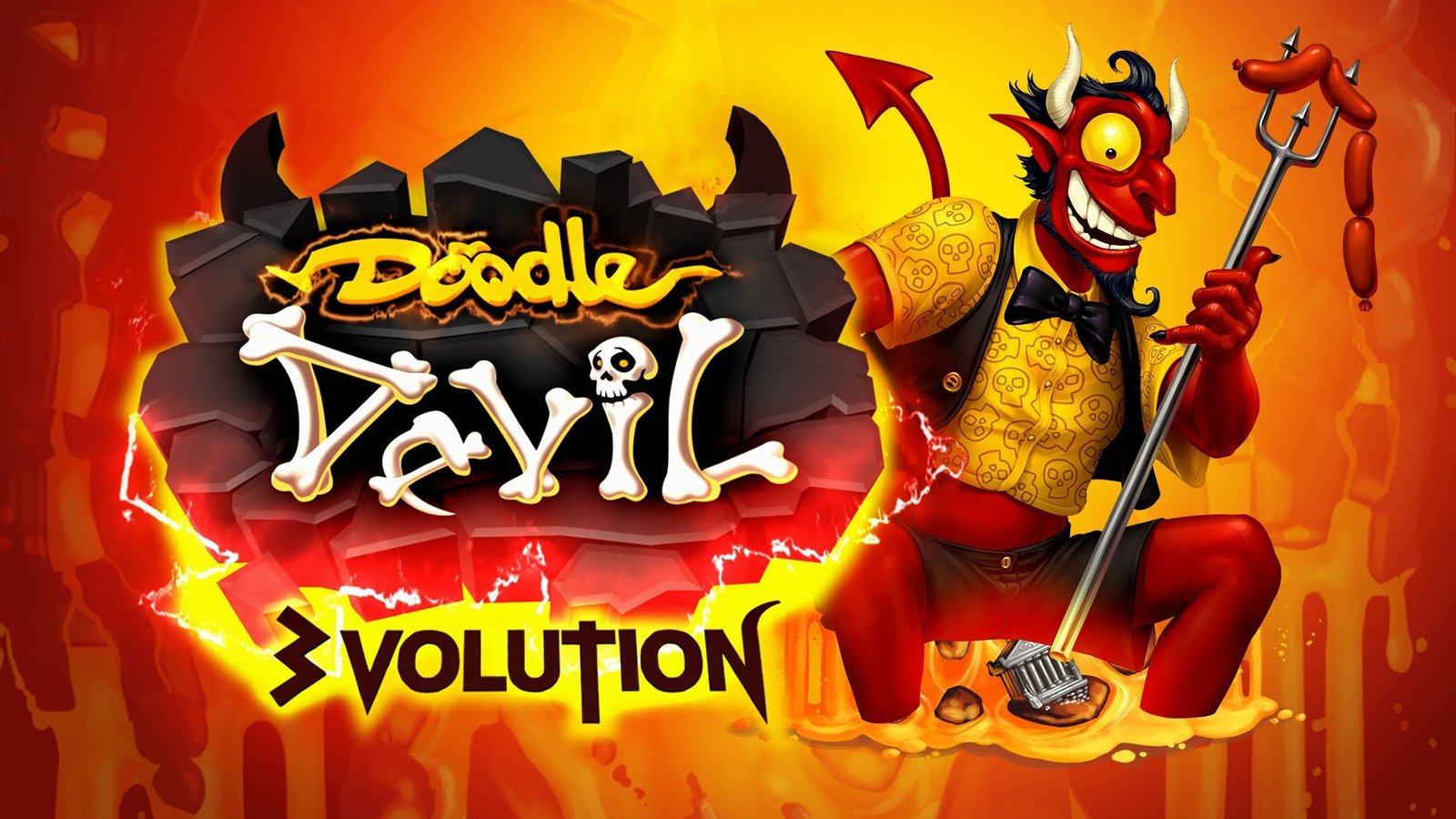 For all of eternity the struggle between light and darkness has been depicted in countless forms. JoyBits have developed a fitting counterpart to their Doodle God: Evolution with the extremely original titled Doodle Devil: 3volution.

This devilish puzzle experience offers 3 modes, amusing narration from the devil himself, philosophical quotes – including the likes of Winnie the Pooh, and a mental challenge for those that like to get their logic juices flowing. They say the devil is in the details and in Doodle Devil: 3volution the details are hidden behind our own logic and creative thought processes.

The Main Game mode presents two episodes that are essentially solved by combining every correct possible combination of the 198 elements split between 20 groups. Think of elements as individual components that each belong to a specific group, when a pair is successfully combined it is called a reaction and generates new elements to use and attempt to combine. For instance, combining Earth and Fire, two elements from the same group, their reaction unlocks the new Lava element. Another example would be combining Beast from the Animal group with Human from the Human group, their reaction would unlock the Werewolf element. Some of these combinations are obscure but when the time is taken to think about them there is an applicable logic. 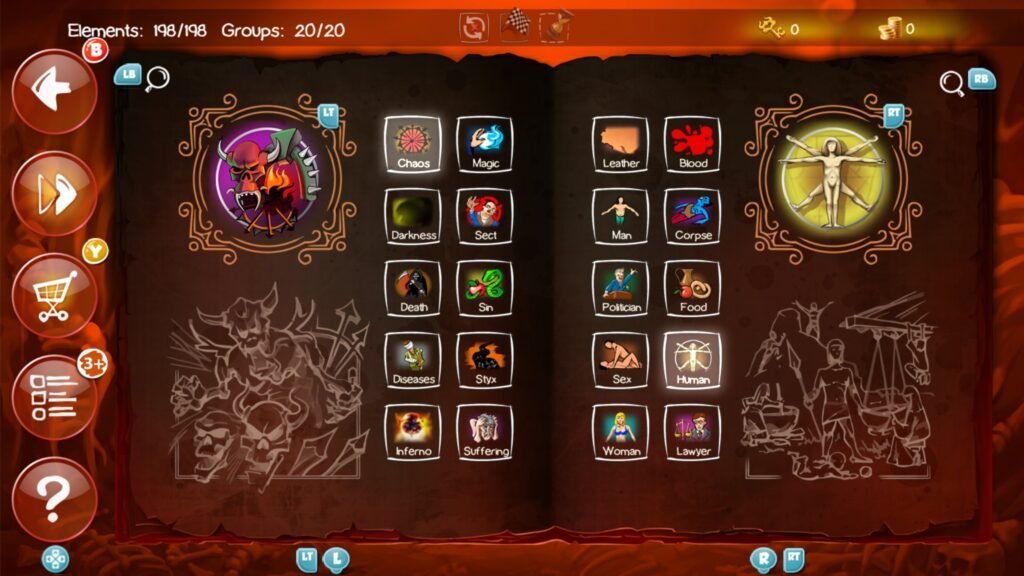 There is no story as such to the Main Game and there is nothing to do other than simply combining elements, triggering reactions to generate more elements, and continue to combine until all 198 elements have been unlocked. The logical minded player will likely enjoy the challenge as opposed to a casual player that may struggle to be as creative with their combinations short of just trying absolutely everything. To assist with struggling players there is an assortment of hints available. Initially there are the following hints available: 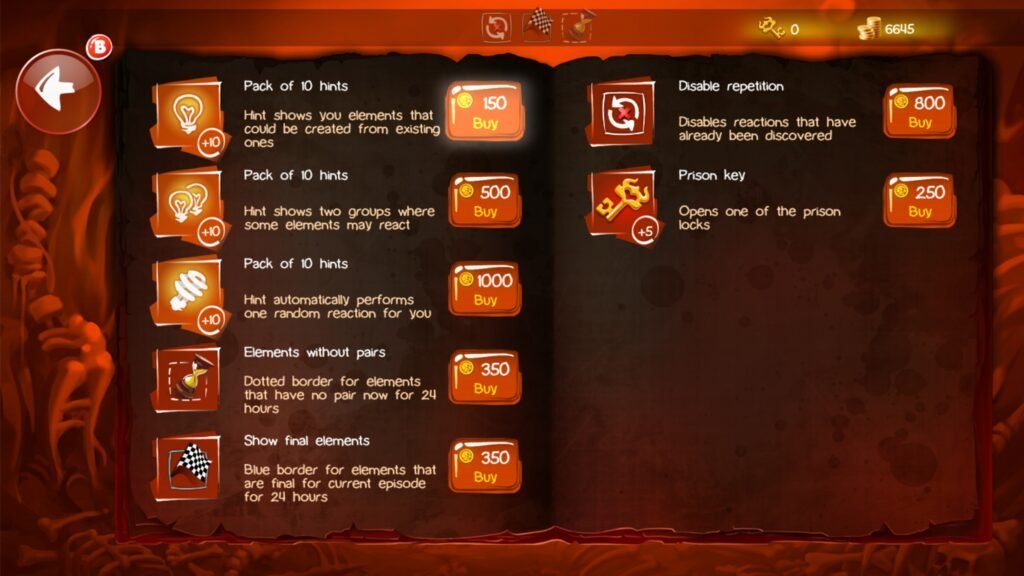 Additionally, these hints can be purchased using in-game coins. I feel it’s important to mention that this title does not contain microtransactions and there is no option to buy these coins with actual currency. These coins are earned via daily sign-in rewards, via the Demon Battle mode and the 10,000 given to the player upon launching the game for the first time. Spending this currency on hints is relatively harmless, especially considering how tricky some of the reactions can be to create.

There is another way to earn coins and that is by playing the Devil Slots mode. This is a slot machine with no bells or whistles or even a unique purpose. This mode exists to allow the player to gamble their coins to try and earn more by hitting one of the 10 payout levels, all relating to combinations of the seven deadly sins and the demon tiles. At no point is this feature pushed upon the player which I believe is a good thing. 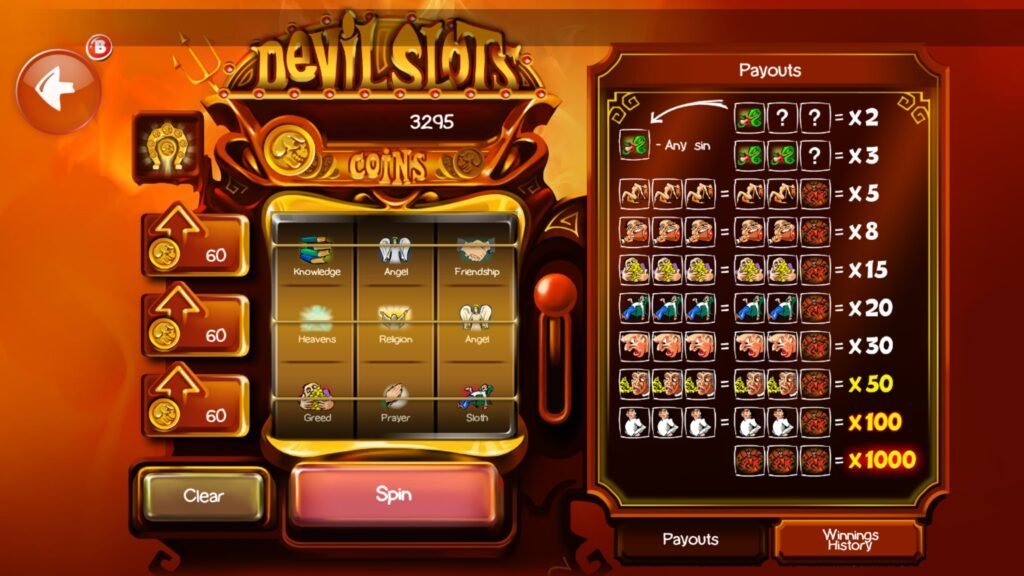 Unfortunately for completionists looking to unlock all of the Achievements or Trophies, like me there is one that is just as likely to unlock within minutes as it is hours, days or possibly never. There is one for hitting the jackpot. This is the only instance where I find this mode to encourage players to spend hours upon hours trying to get lucky which I find to be in poor taste. Having spent over 6 hours tapping A to hit that magical payout, I have run out of coins on a number of occasions. Instead of waiting for a handful to be awarded with daily login bonuses, I deleted my save, uninstalled and reinstalled to try my hand again with a fresh 10,000 coins. For this reason alone I personally think this mode is invasive and while it’s not forced upon me to play it within the context of the game and the experience itself, my inner completionist wants that final achievement and therefore wants to spend hours of pressing a single button while spending in-game currency to do so. 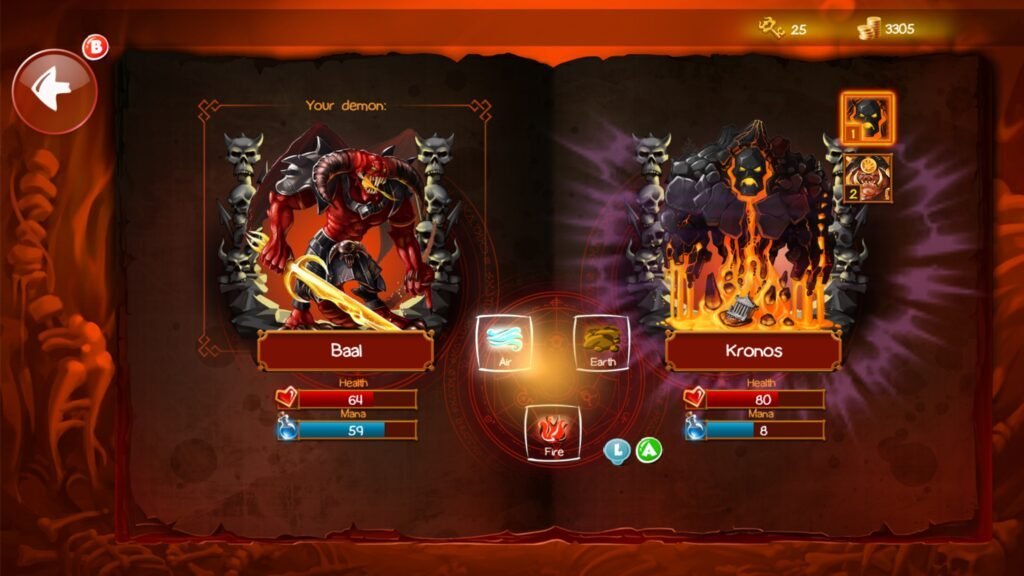 The third and final mode is Demon Battle, briefly mentioned earlier. Demons are unlocked as elements within the Main Game and upon doing so they become purchasable in Demon Battles by spending Keys to unlock their prison cells. These Keys can be bought in the hint section of the Main Game mode at the expense of coins. Each demon has different health, attack and mana stats. The battles themselves consist of automatic attacks from both parties as well as the option to combine a very small selection of elements to use as attacks at the cost of Mana. Simply deplete the enemies health with these attacks and the game is over. The rewards for winning are coins or hints to use in the Devil Slots and Main Game modes respectively. If the player is defeated they are able to buy back in to continue the fight at the cost of coins. 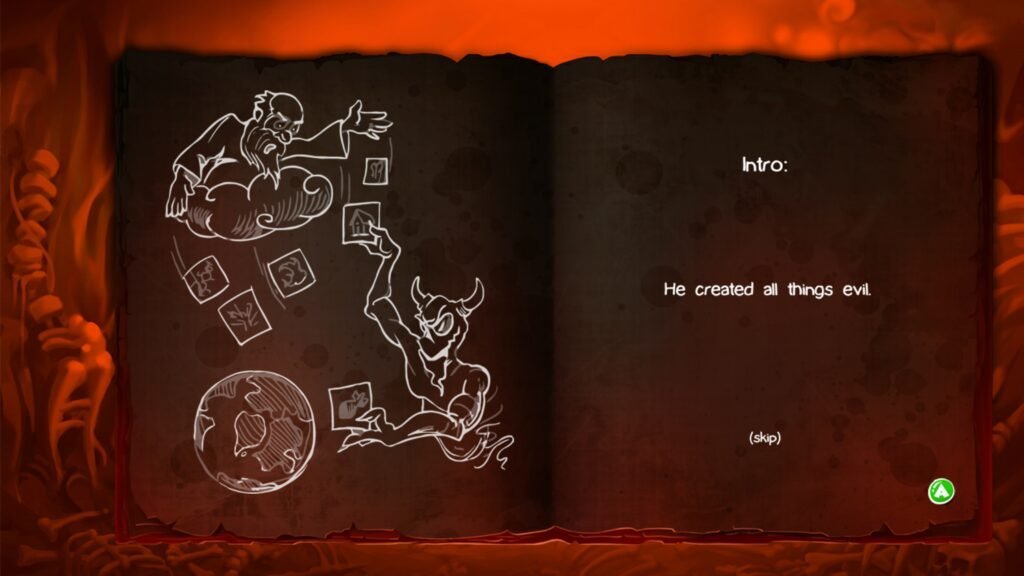 The art style of Doodle Devil: 3volution offers simplistic and almost caricature style tiles that are playful and even amusing at times. Lacking any real story there are no cinematics or even stills outside of the brief opening to the Main Game. The score is appropriately angelic and demonic, both light and moody. It works well as background noise while the player is deep in thought of which elements to combine but fails to feel like a meaningful contribution to the overall experience.

Despite the lack of explicit language or visuals that may disturb, the inclusion of the Devil Slots mode may be why this title has been rated mature. The thought process of combining the elements to cause reactions seems like a mentally stimulating and innocent enough concept for younger players but the inclusion of gambling is somewhat alarming. 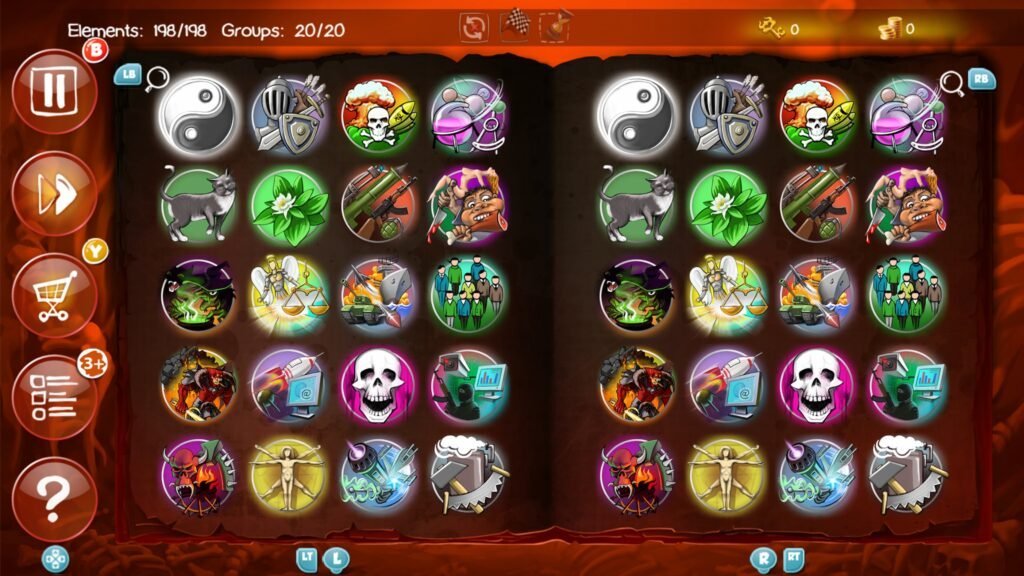 For those that enjoy a mental workout there is fun to be had. I spent just over 3 hours unlocking all 198 of the elements and some of them genuinely had me stumped momentarily. I enjoy this type of logical puzzle solving and likeminded players and fans of the genre and franchise will too though players may find it a bit much, even with the aid of hints. The inclusion of a brief narrative would have given purpose to the Main Game mode and added value while the lack of purpose of the Demon Battle mode and the questionable Devil Slots mode leave plenty to be desired in replayability.

* To reiterate, the Devil Slots mode is not at all forced on players. Tying an Achievement/Trophy to the incredibly random nature of slot machines and hitting the jackpot is why I don’t think this mode is appropriate. * A digital code was provided as a team member of One More Game and Xbox Gamer Dad, by co-founders Matt Brook and Adam Potts as the gods that they are, for the purpose of this review. *