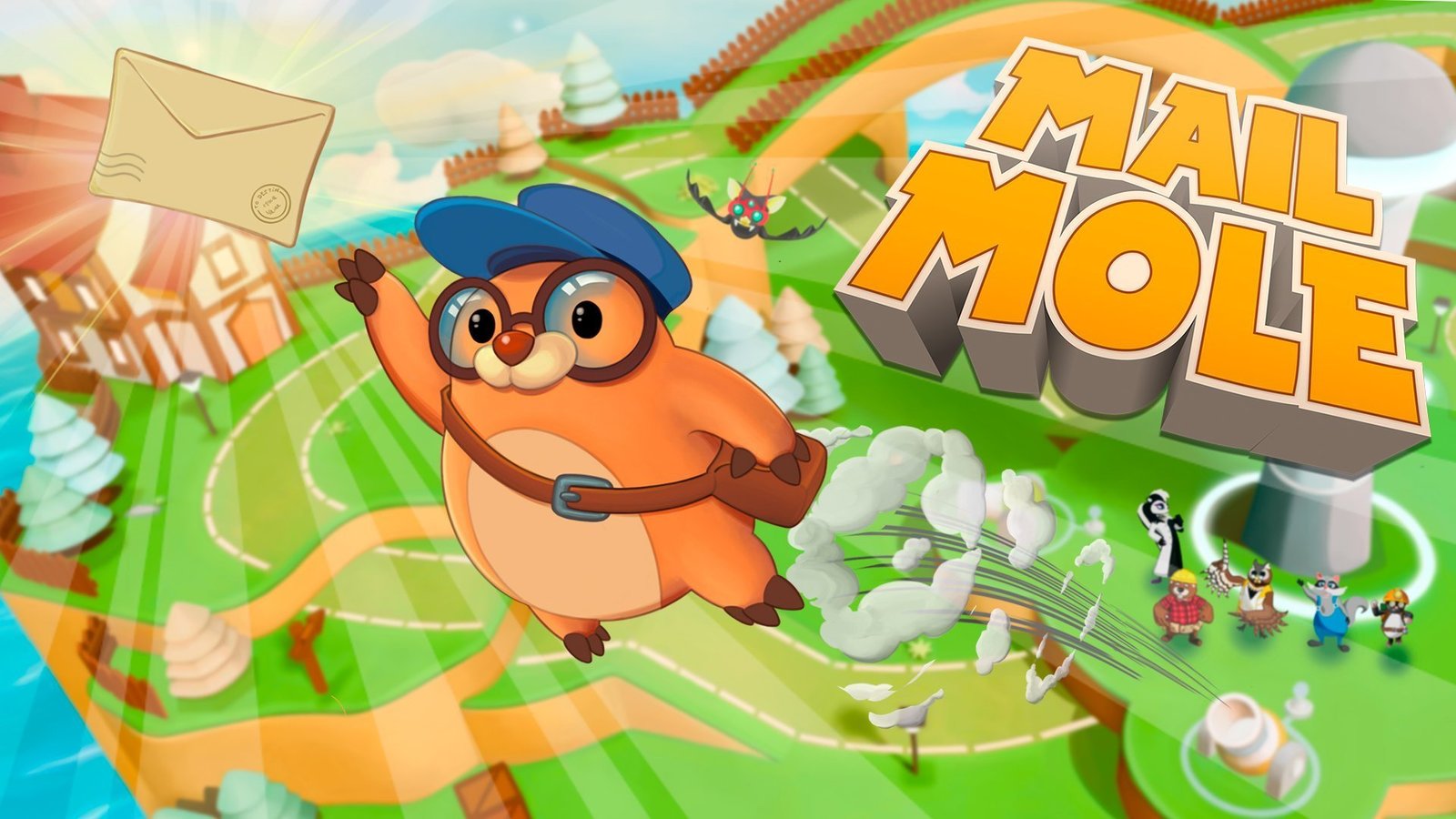 Molty is on holiday in the Coconut Islands when he receives a letter saying his help is urgently needed back home in Carrotland. Returning to discover that all of Carrotland’s power stations have been hacked by pirates, Molty is tasked with restoring power to the individual stations, taking him on an adventure through obstacle filled locations such as canyons, resorts, snowy mountains and volcanoes. Burrowing underground and leaping to the surface to jump over environmental hazards, players can race against the clock to chase gold medals and collect carrots to spend on cosmetics in this playful single player 3D platformer, Mail Mole.

With the simple premise of restoring power to the island after recurring attacks from naughty pirates, Molty jumps, dashes and sprints through over 30 levels broken into seven unique areas. Peaceful Plaza in Carrotland serves as the hub of Mail Mole, littered with Cannon Lines that act as transportation to the different areas where Molty, a tiny mole, is literally shot out of a cannon to reach them.

As Molty slowly restores power to Carrotland with the power cells awarded upon completion, additional areas open up. The stage design throughout each world is impressive, offering variety in how they actually play. Some are typical platformers that see Molty jumping his way through, others are like a sprint, a speed runners paradise to trigger acceleration boosts and reach the end as fast as possible. With light environmental puzzle solving that focuses mostly on pressure plates that can be activated with a groundpound attack, Mail Mole keeps each of its levels interesting. Shifting perspectives such as side-scrolling and escape sequences reminiscent of Crash Bandicoot being chased by boulders, the variety keeps the levels exciting which is impressive considering most can be completed in a matter of minutes. 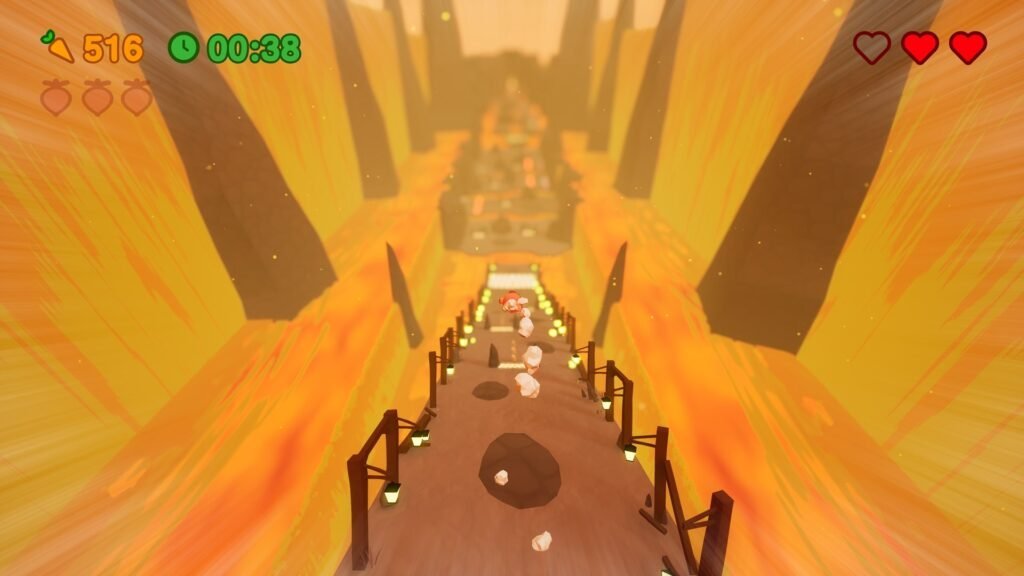 Each level is littered with carrots to collect that serve no purpose other than to purchase cosmetic items from the shop in Carrotland. Players are able to purchase hats, glasses and satchels/bags for Molty and can mix and match styles as they please. These are purely cosmetic and offer no gameplay altering advantages or disadvantages. As well as carrots, each level has three large radishes to find, most of which are in plain sight though some will require a little exploration and potentially quick reflexes to find and reach. These have no purpose other than being used to unlock special gear from the store. 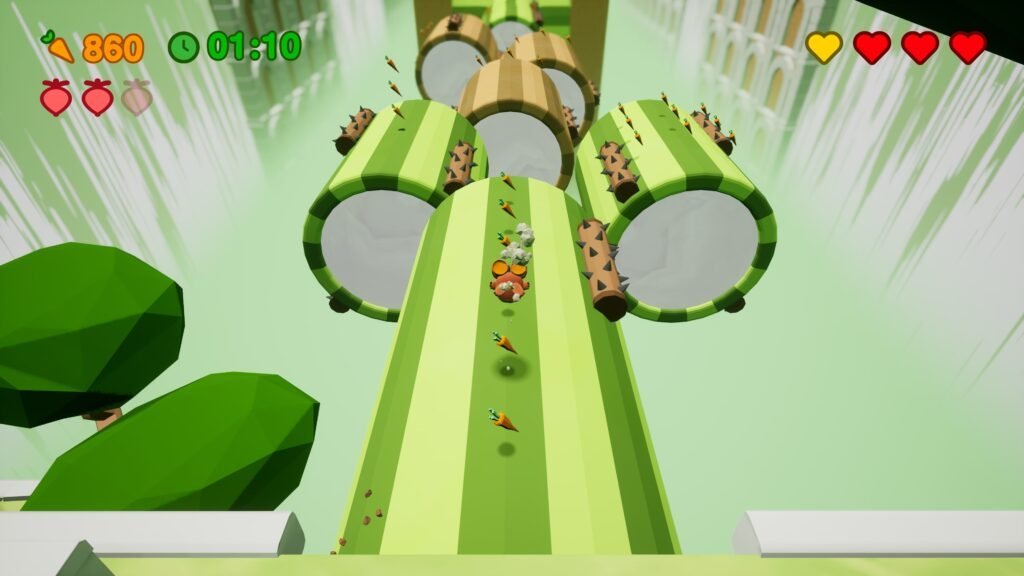 Perhaps the most surprising gameplay element of Mail Mole is how it has been designed with speed running in mind. The player’s time is gown on screen for how long they have spent on the level and at the end, depending on how fast they were, can be awarded a bronze, silver or gold medal if they finished within a certain time. Unfortunately there is no way to look at these time requirements until the end of the level has been reached, leaving the player in the dark in regards to what time they need to be aiming for. Simply sprinting through as fast as possible and hoping for the best doesn’t exactly allow for players to plan and gauge their performance or whether they should restart to try and do better. 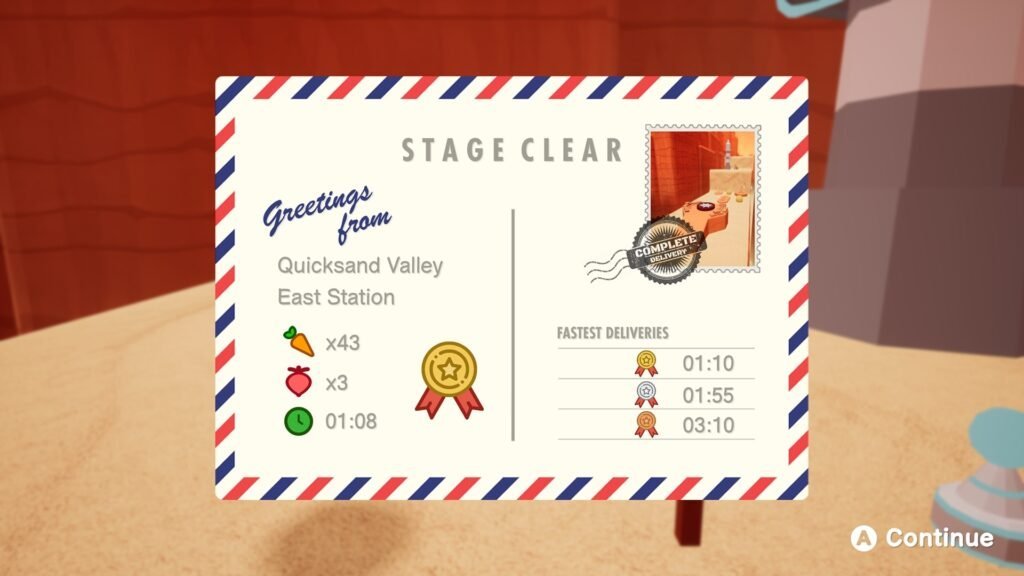 When each area has had its four levels completed Scarlett the Skunk offers a race set in the completed area against Mecha-moles. These are simple sprint races requiring Molty to reach the finish line before his three mecha rivals. These are pretty straightforward for the most part however on a number of occasions I observed the Mecha-moles doing something that genuinely shocked me considering the family friendly status Mail Mole otherwise has. They cheat. 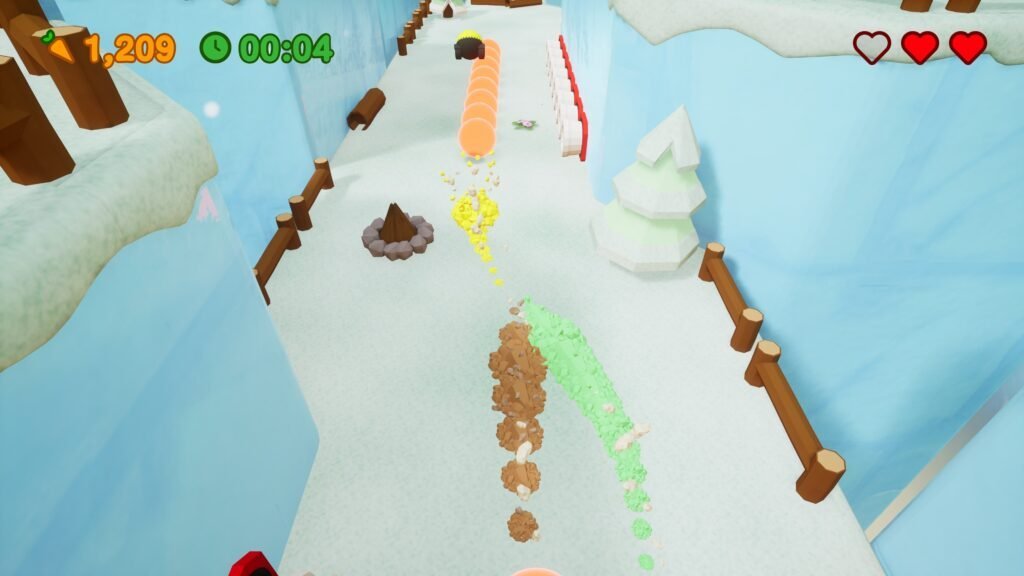 Running into an obstruction such as a fireball or a log will stop Molty dead in his tracks but when a Mecha-mole runs into them? Not a problem, straight through, un-phased, no stoppages, just off they go on their merry way to a podium finish. With the exception of one or two races, it’s rather easy to win but these exceptions I’ve mentioned are incredibly tight time wise and are ridiculously full of things to slow you down. The fireballs for example, as Molty burrows along underground you are unable to go underneath them without being hit, they must be jumped over to avoid being stopped, unless you are a Mecha-mole – which we as the player are not. This insane advantage these opponents have when it comes to collision means the player needs an immaculate and flawless run. For this reason alone younger players in particular have almost no hope of ever completing every race. Completing these races awards a power cell required for the overall completion of the story.

As well as the races, completion of an area puts players into fun puzzle based boss battles. The newly introduced environmental hazards and puzzle elements from the previous area are cleverly incorporated, with each boss encounter increasing in difficulty. The final boss encounter is multi-layered and throws everything at the player in a challenging but enjoyable sequence. 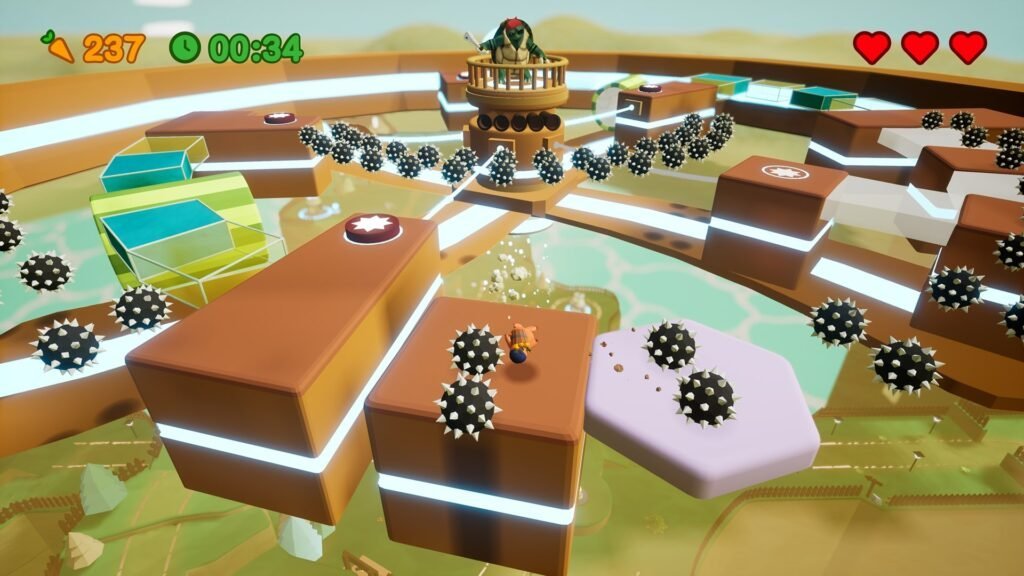 There’s a visual charm to the simplistic style of Mail Mole that feels playfully nostalgic and almost cute. Each of the levels are colourful and creative, cleverly designed to remain accessible to younger players while still being enjoyable by an older audience. The models of the handful of supporting characters are decent though none are particularly detailed or exciting. Where Mail Mole fails to stand out is its soundtrack. It feels very generic, never fits the scene or the gameplay and comes across as very bland and lacking the energy and upbeat themes you would expect from a title of this pacing. 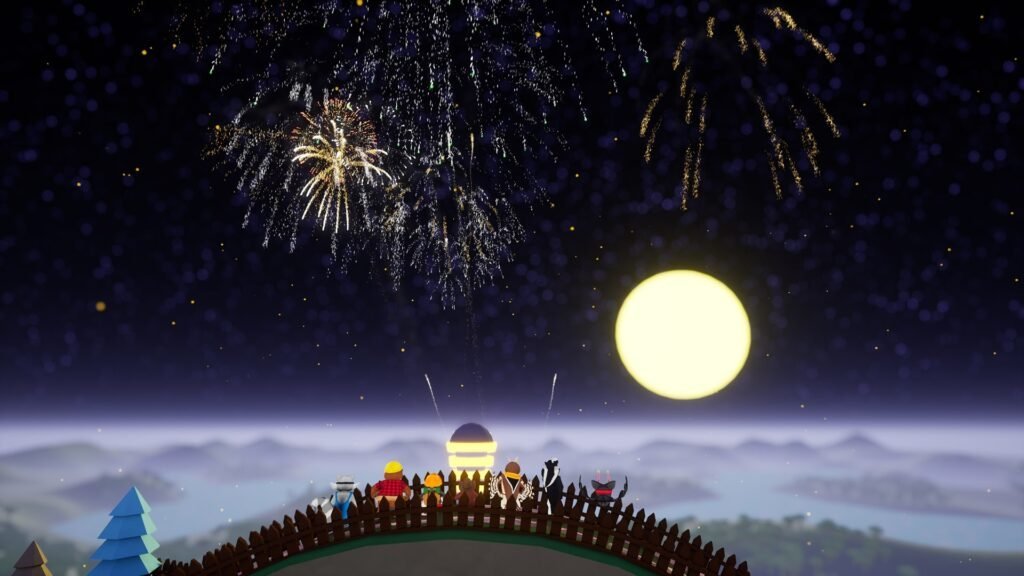 The lack of any form of co-operative play or multiplayer is baffling considering the focus on time trials and the overall family friendly and accessible gameplay. Younger players definitely have a lot to enjoy and replay, it’s just a shame the experience can’t be shared.

Mail Mole is a surprisingly decent 3D platformer with smooth gameplay, fun level design and enjoyable challenges bogged down by a terrible soundtrack, cheating AI and the lack of any additional modes. There’s fun to be had here for players of all ages and the pursuit of gold medals and unlocking all of Molty’s outfits can keep players coming back for a while.

– The soundtrack does not fit 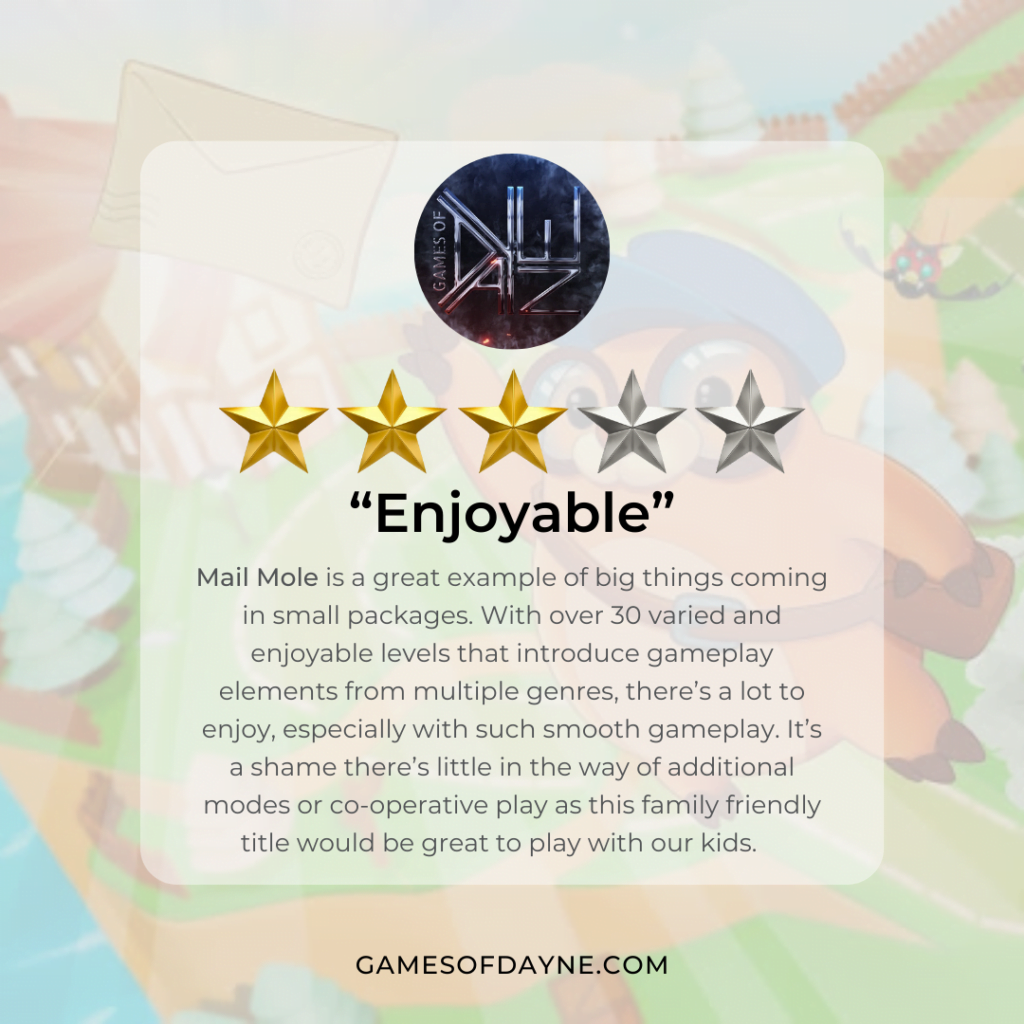