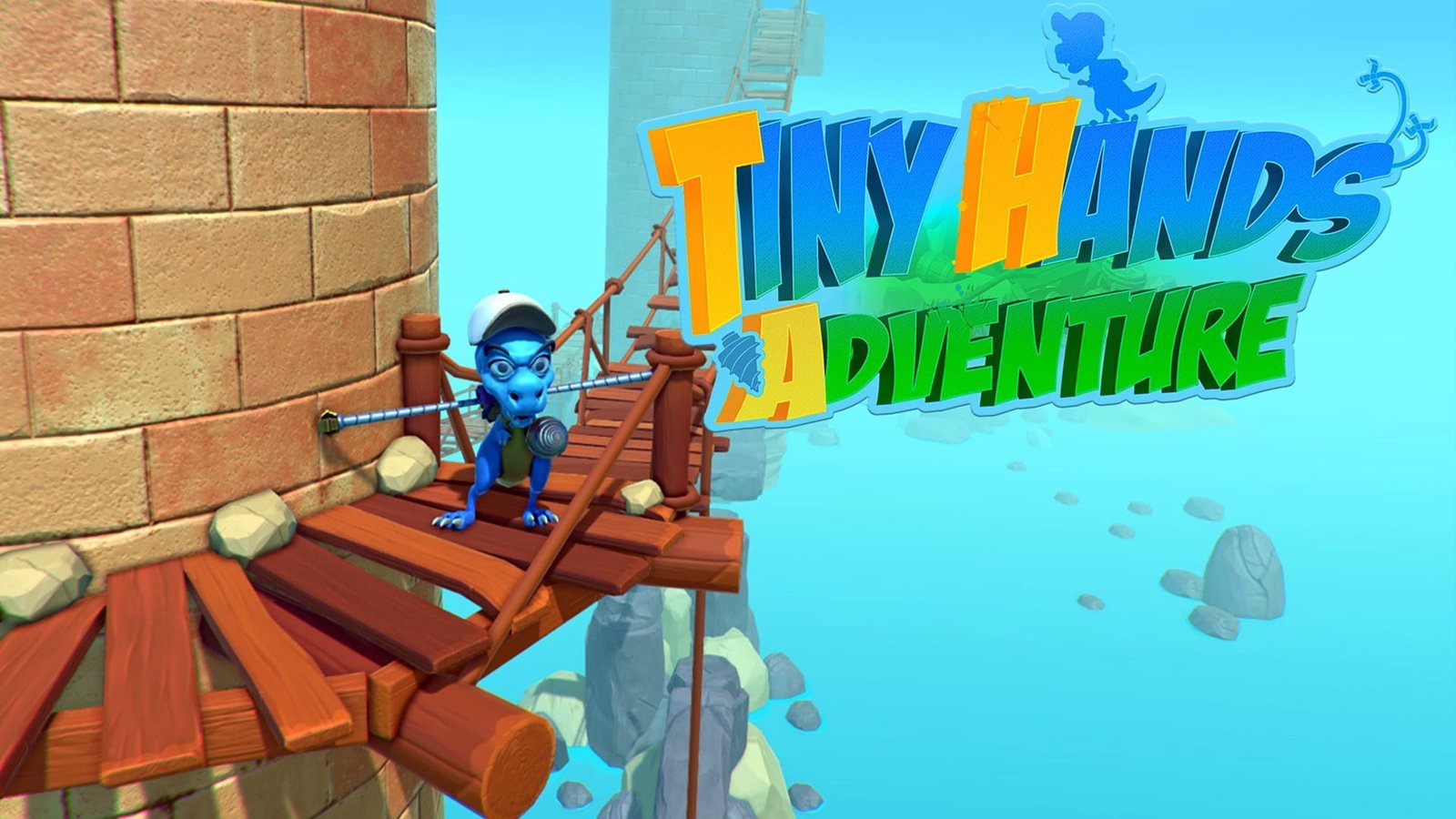 Borti is just like every other blue t-rex. He wants to be the best goalkeeper on his school soccer team in Dinoburg but thanks to genetics and evolution he has two problems. His short arms. Tasked with completing four trials by Florella, the local fairy, Borti sets out to conquer them in exchange for solutions to his short arm problem in this playful 3D platformer, Tiny Hands Adventure.

The wacky premise sets the stage for single player exploration of twenty levels that span five areas with charming and varied stage design and simplistic gameplay elements, accessible for players of all ages.

As per the suggestion of the local elders of Dinoburg, Borti seeks guidance from the fairy Florella. In exchange for completing four trials that requires the collection of mystical gems and defeating each trial’s Guardian, Florella will create contraptions for Borti to extend his reach and fulfill his dreams. These new tools allow Borti to perform new gameplay actions and encourage replaying previously completed levels to access previous inaccessible areas. 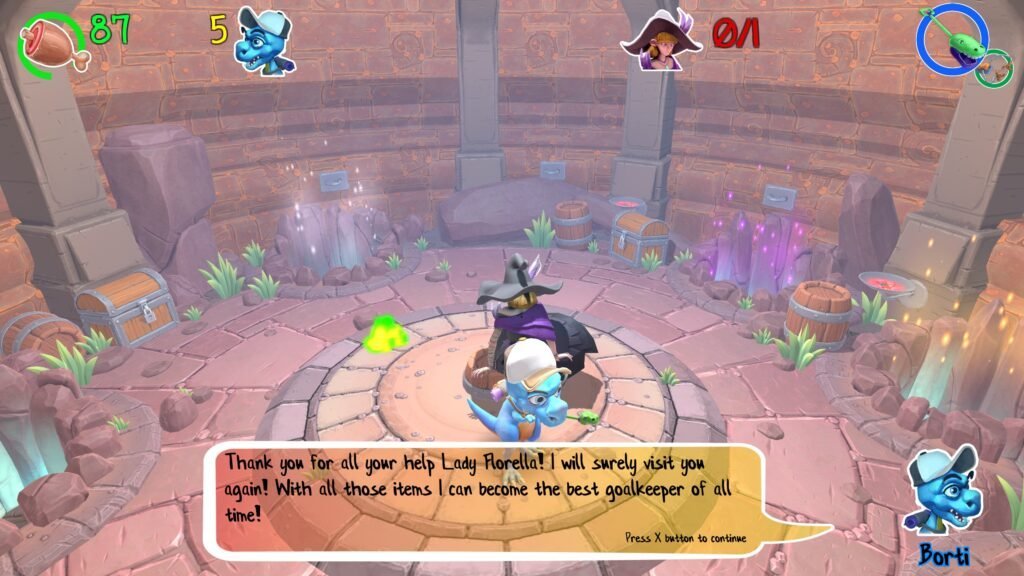 Comparable to earlier Crash Bandicoot and Spyro the Dragon titles, Tiny Hands Adventure starts the player off in a hub world with six portals. Four of these portals access the levels of this particular hub world, referred to in-game as an Area while the other two are for travelling to other unlocked Areas and for challenging the Guardian. 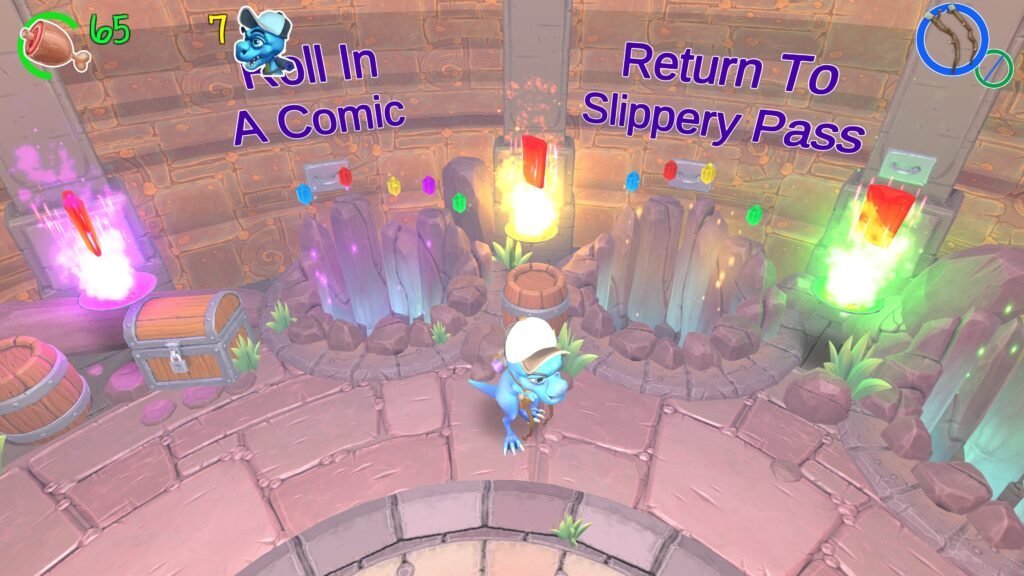 Each level has five coloured gems to collect and an orange shard. Collecting all five of the coloured gems unlocks that level’s Hard variant which offers an additional white gem upon completion. Most of the levels will need to be revisited as the four new tools are unlocked as at least one coloured gem is typically inaccessible upon the first playthrough. The level design is fairly linear and most of the gems are in plain sight or the tool required to reach a different area is either visually indicated in-game or with a button prompt. 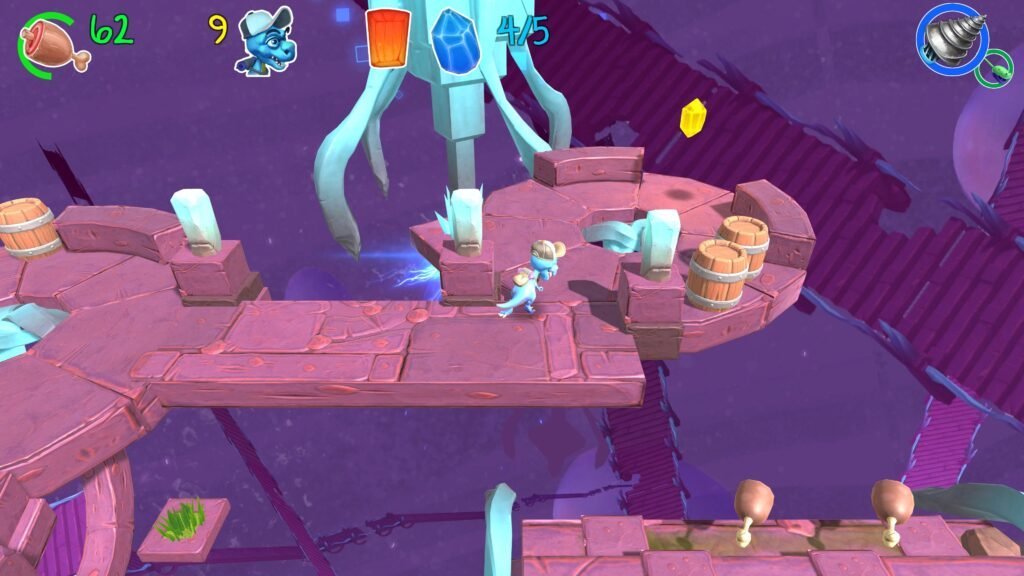 Collecting the singular orange shard from each of the four levels in the Area will unlock the Guardian’s portal, leading to the equivalent of a phased boss battle. Rather than emphasising direct combat, these levels focus on platforming and avoiding projectiles to land individual hits before the Guardian mixes up their attack patterns until they are hit two additional times.

These levels are made accessible by removing any consequence of defeat. Instead of having to restart, the player respawns with the enemy’s health remaining as it was before defeat. If the player had managed to hit the Guardian two out of three times for instance but was defeated, the Guardian will still only have one health left upon respawn. These Guardian battles are relatively straight forward as a result, a welcome consideration for the younger players in particular. The game world can be revisited after completing the story allowing players to return and collect all of the gems. 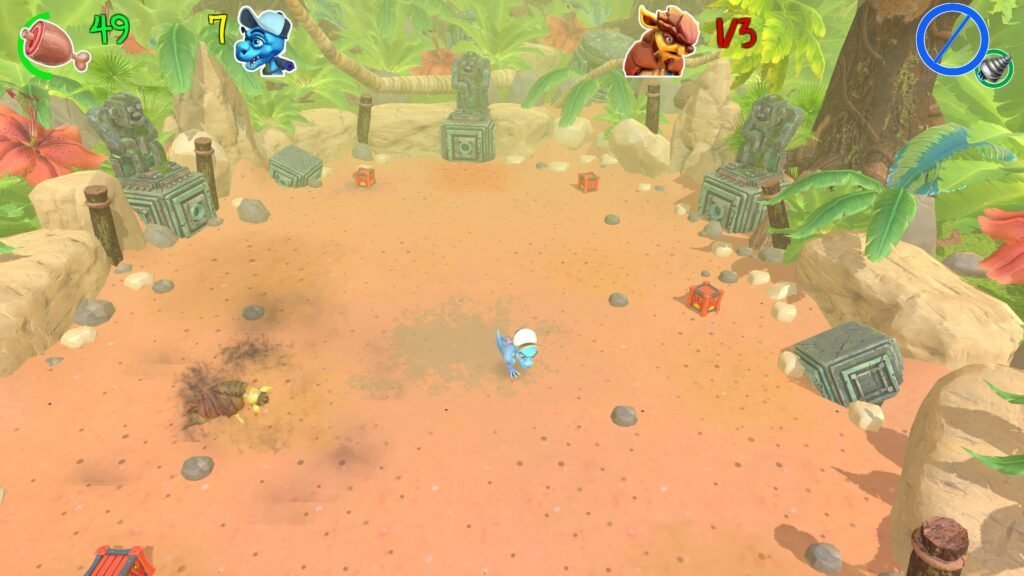 Borti is initially only able to jump on or perform a tail spin to defeat enemies, the likes of which include large variants of wasps, spiders and turtle like creatures. With progression and the defeat of Guardian’s, Borti soon has access to a drill, a grabber, mechanical arms and sticks. These tools can all be used to defeat enemies though their primary  is to drill into the ground to unearth collectibles, grab objects that are out of reach, to swing from pillars and to act as stilts to cross otherwise deadly terrain respectively.

They are fun to experiment with in combat and are visually amusing to see when used by a childlike hat wearing little t-rex. The charm and simplicity of the combat keeps the levels more relaxing than similar titles by not throwing too many enemies at the player at once. The platforming is fairly generous as the gaps and environmental hazards have a reasonable clearance zone. 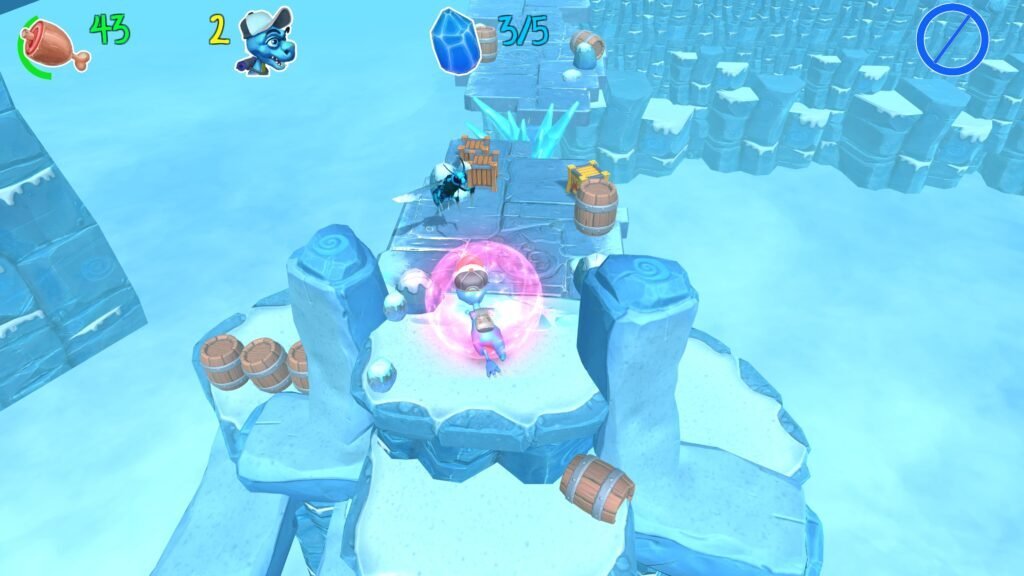 Along the way the levels will be littered with additional lives to find, boxes to smash and meat to collect, with an extra life being awarded with every 100 meat collected. Everything is instant defeat for Borti whether it’s falling through a gap, entering water or taking any damage from an enemy. The player is returned to their nearest checkpoint which is a purple box with “safe zone” written on it. As the levels all take as little as five to ten minutes to complete, the backtracking is kept to a minimum. 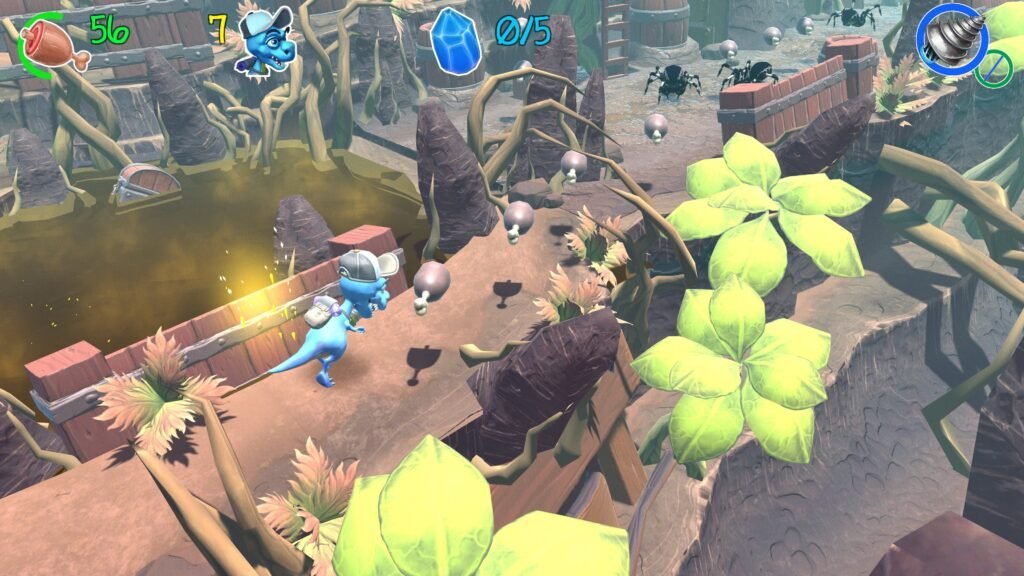 Mixing up the gameplay on a handful of occasions are some fun alternative genres. 2D side-scrolling with comic style animation, top-down mazes and of course some dramatic chase sequences similar to Crash Bandicoot that has Borti running towards the screen to escape a boulder. 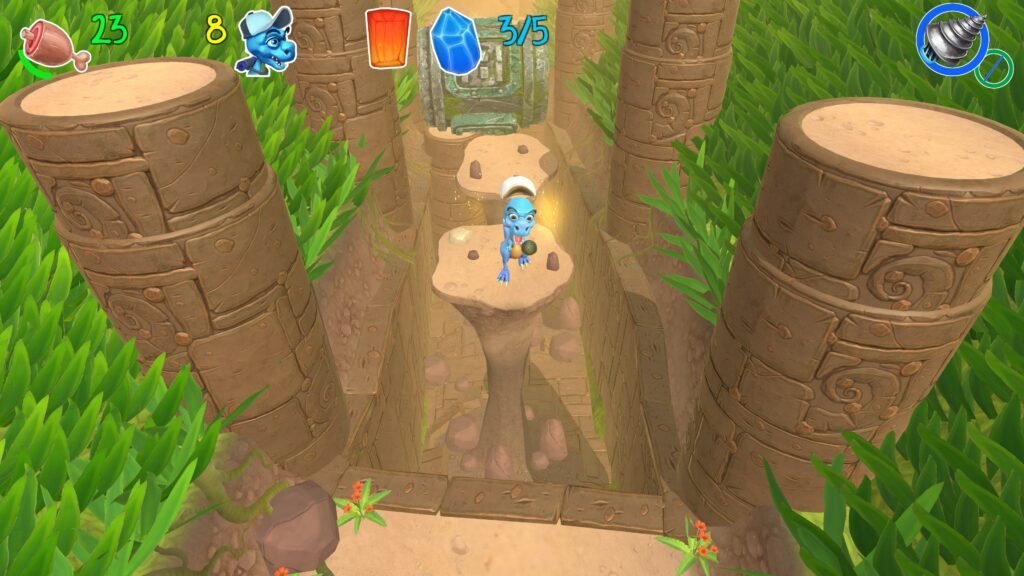 These inclusions are fun and add variety to an otherwise linear experience. The platforming itself is typically just jumping from A to B but moving elements such as platforms and blocks of ice add a little variety and verticality. 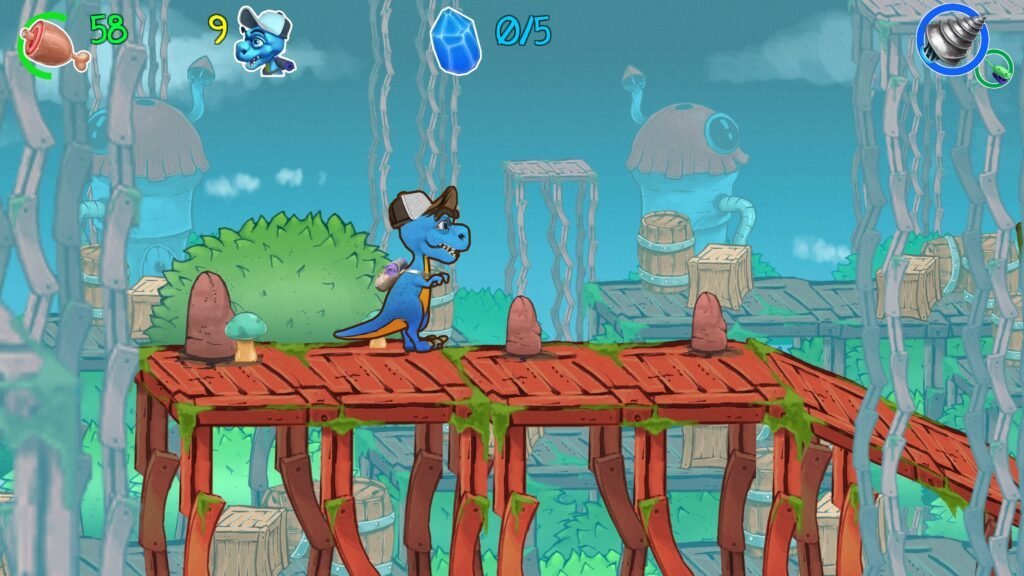 The charming art design and playfully melodic score keep Tiny Hands Adventure upbeat and light in tone. With vibrant environments and character models across a range of diverse locations Borti’s adventure can easily and enjoyably be experienced by players of all ages. 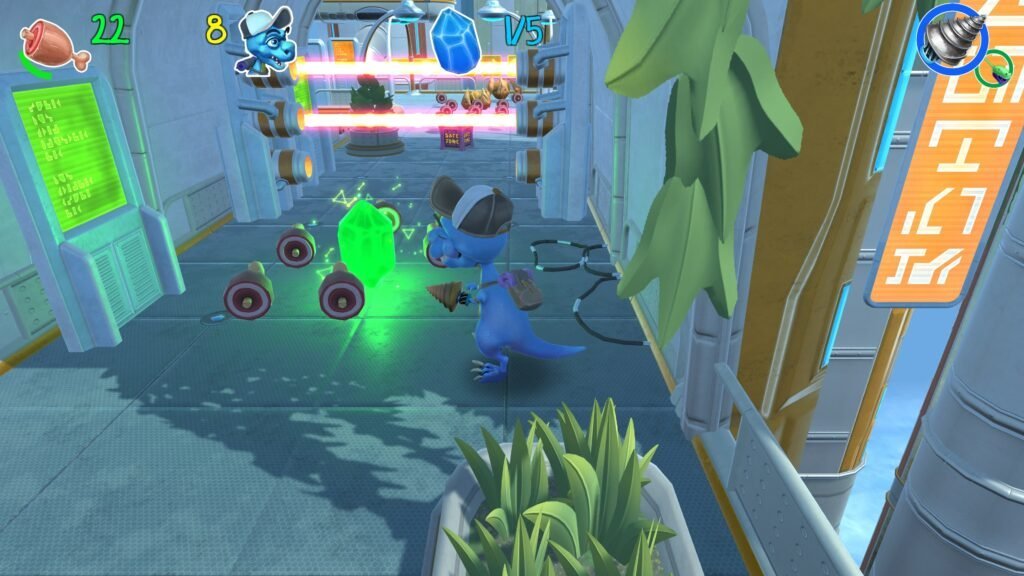 Tiny Hands Adventure is simplistic in its aesthetic and gameplay, offering a genuinely family friendly experience starring a little blue t-rex that just wants to be good at soccer. With a light spirited premise like this, Borti’s adventure brings a joyful tone to a genre that has been a staple for generations.

– Lack of modes or co-operative play

– No replayability upon completion 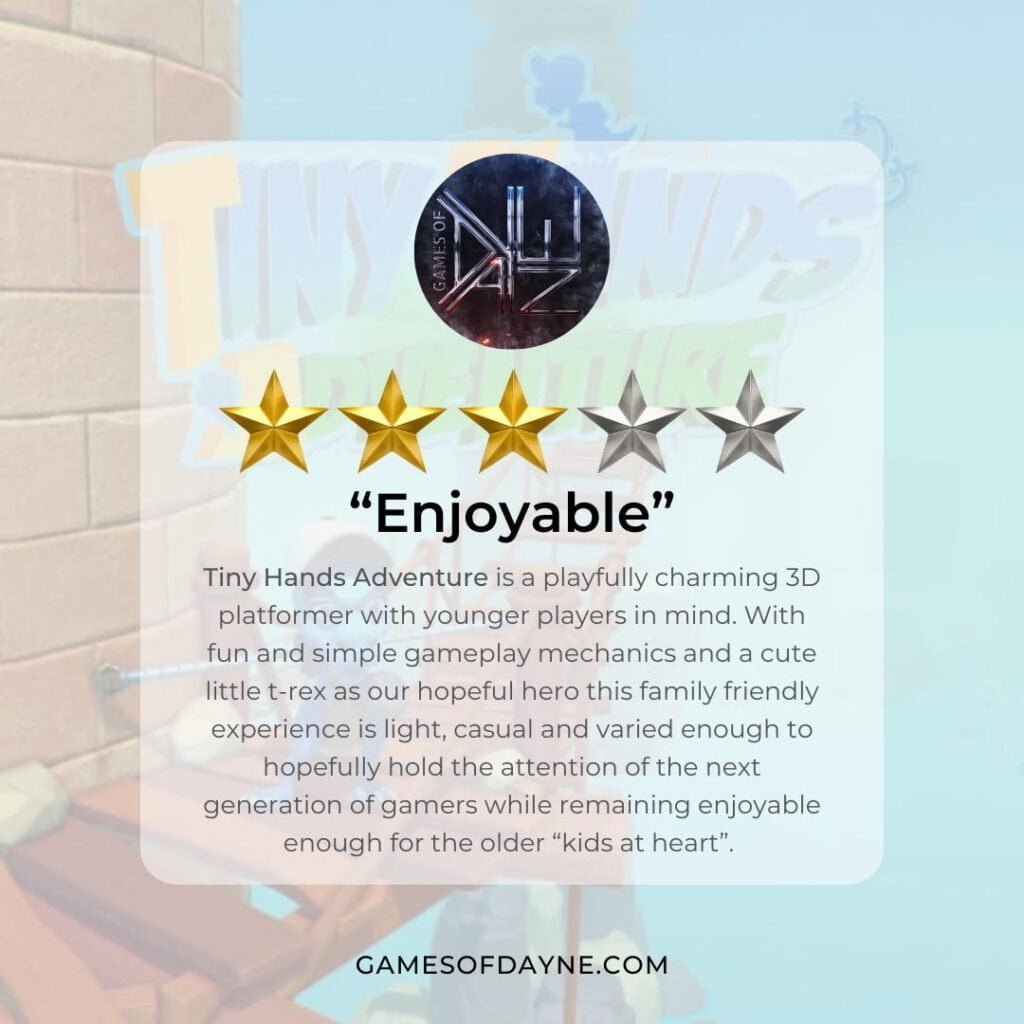