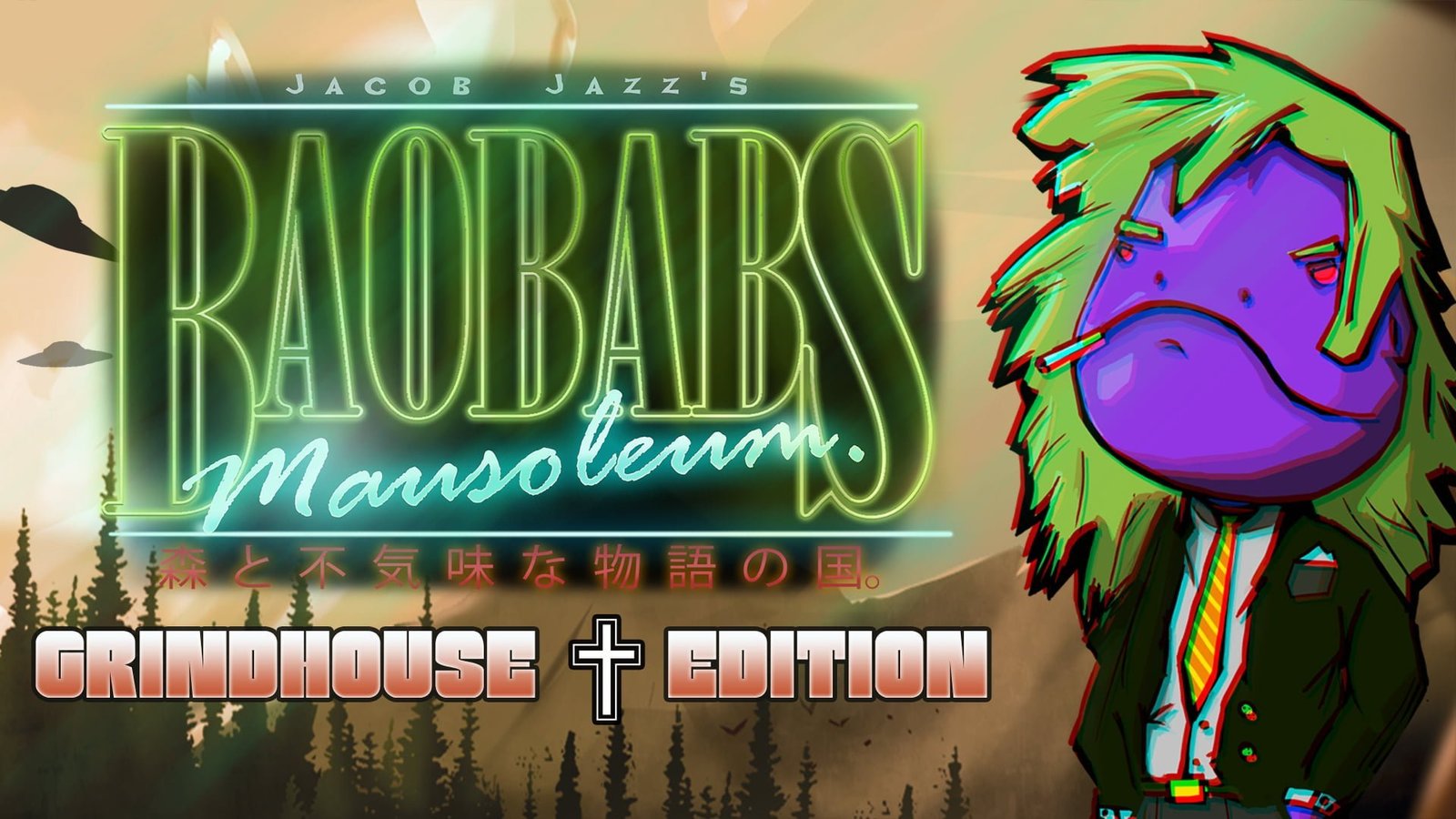 Weird, wild and outlandish are terms of endearment when it comes to the wacky world of Baobabs Mausoleum: Grindhouse Edition – Country of Woods and Creepy Tales. The 8-bit pixel art gameplay and rugged but charming lightly animated stills are undeniably quirky. With three episodes that up the ante on the scale of ridiculousness, Baobabs Mausoleum is a slapstick adventure following the vampire eggplant FBI Agent Watracio Walpurgis that is sure to draw a few chuckles along the way.

Originally released episodically on Steam and Nintendo Switch between 2017 and 2019 this trilogy of episodes have been packaged into the Baobabs Grindhouse Edition – Country of Woods and Creepy Tales. With the premise of this title taking place in the 99% likely-to-be fictional Flamingo’s Creek, a ghost town that only appears on the 11th of March once every 25 years, the tone is immediately set that this experience will be oddly specific, incredibly random and wildly unpredictable.

The player is able to choose to play any of the three episodes in whichever order they please by interacting with the corresponding tv screen in the middle of the woods full of swinging and somehow talking corpses. Playing in chronological order is recommended though each episode does tell a self-contained story with enough information of prior events for them to be played out of order. 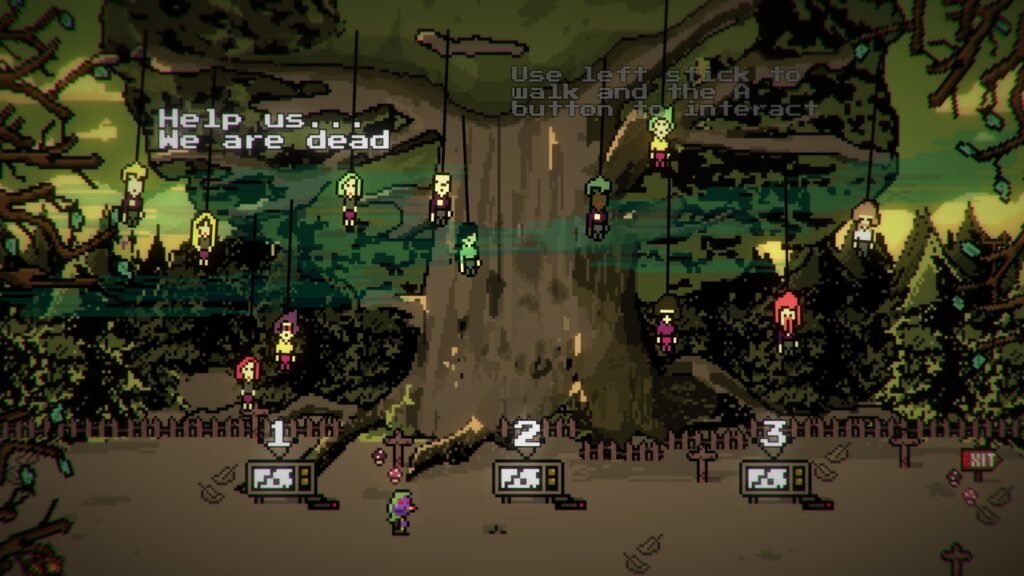 The protagonist is naturally an eggplant FBI agent with a name that rolls off the tongue about as well as supercalifragilisticexpialidocious. It’s easy to see why majority of the inhabitants of Flamingo’s Creek simply call him an eggplant or lettuce-head. Agent Watracio Walpurgis is a no-nonsense eggplant vampire on a mission that finds himself investigating the abduction of his love interest, Daphne. 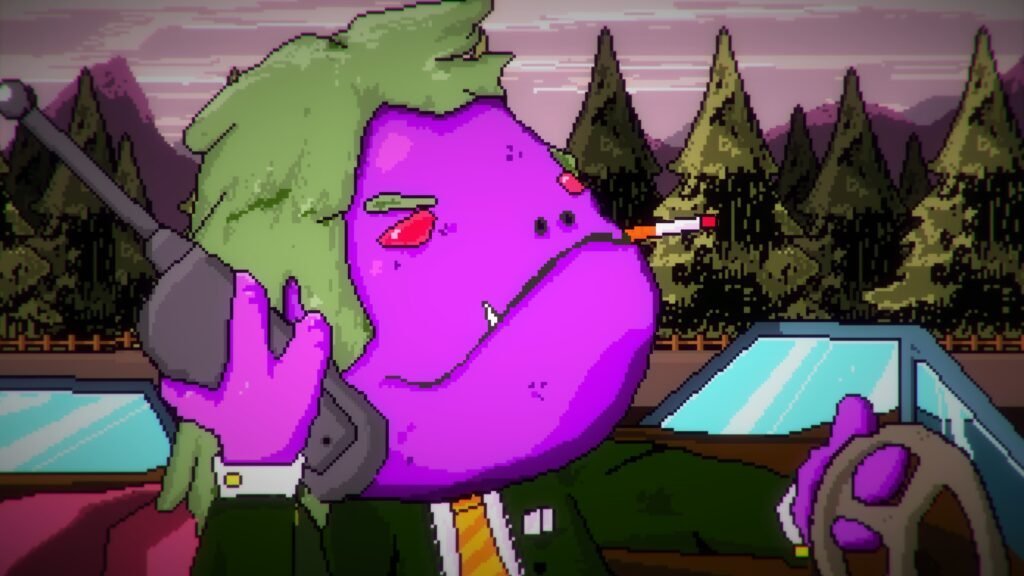 To get to the bottom of what happened, before and after the abduction, everybody’s new favourite eggplant detective must talk to all of the towns interesting inhabitants, and by interesting I mean borderline schizophrenic, passive aggressive and mostly non-cooperative townsfolk. Their personalities are all wacky and unique with a near even split of pro/anti Agent lettuce-head. 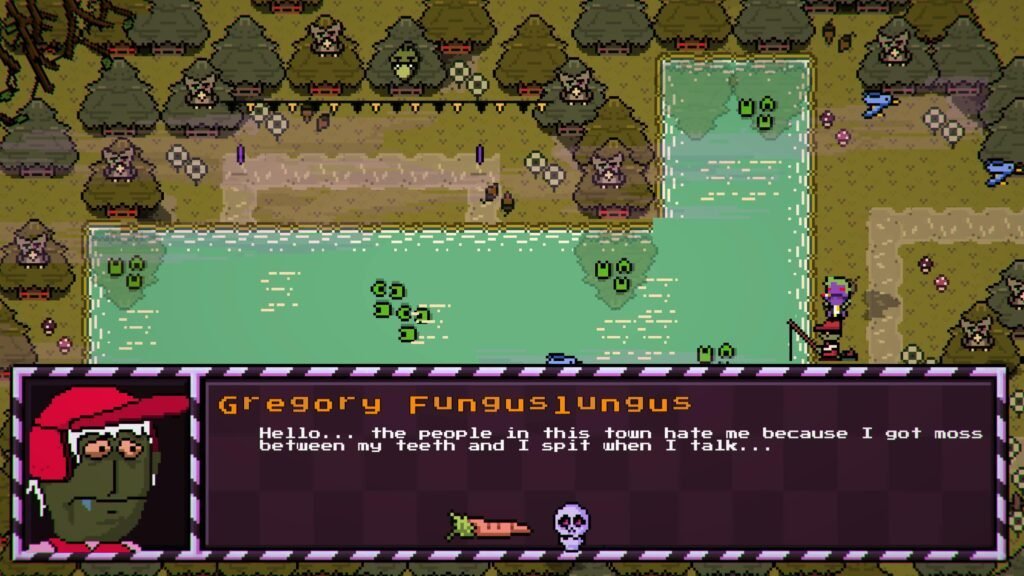 Talking to the townsfolk will either open new dialogue options with specific characters, provide items that are required for puzzle solving later or result in Watracio leaving the conversation for some reason or another, typically when the insults start flying from either party. The importance of talking to everyone can’t be stressed enough as some of the dialogue provides clues to puzzles, item locations or a genuine giggle if nothing else. I will not confirm nor deny how many hours I spent on one part thinking I had talked to a particular character with vital information after passing them an undisclosed number of times… 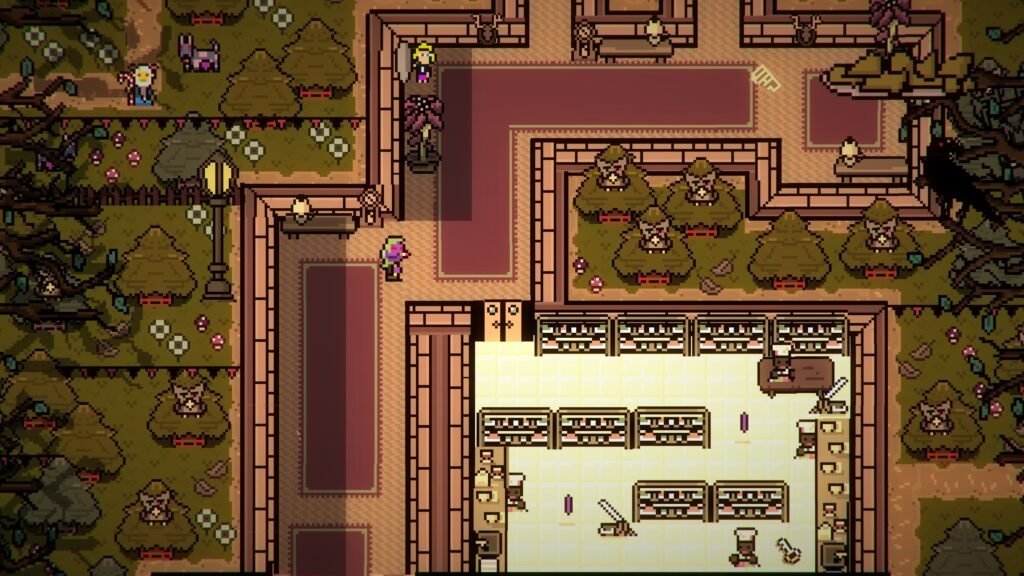 The explorable environments are a decent size without being overwhelming. The later introduction of a map makes things much easier as backtracking is a constant requirement throughout all three episodes. Littered around the environment are celery tokens, purple coin looking things, with 120 in each episode. Upon collection they of course make the sound of a frog’s “ribbit”. Also tucked away are 5 special cookies which are hidden, detectable only by vibration which increases in intensity as the player gets closer to it.

Aside from collectibles, there’s plenty of weirdos doing weirdo things that keep the exploration amusing and light. Just as unique are the puzzles and problem solving exercises that are required to complete to progress. These are sometimes simple fetch quests while some deeper ones require a gasoline path to be created and ignited, navigating a labyrinthian party in a mansion and exploring a cinema in search of tickets and keys. 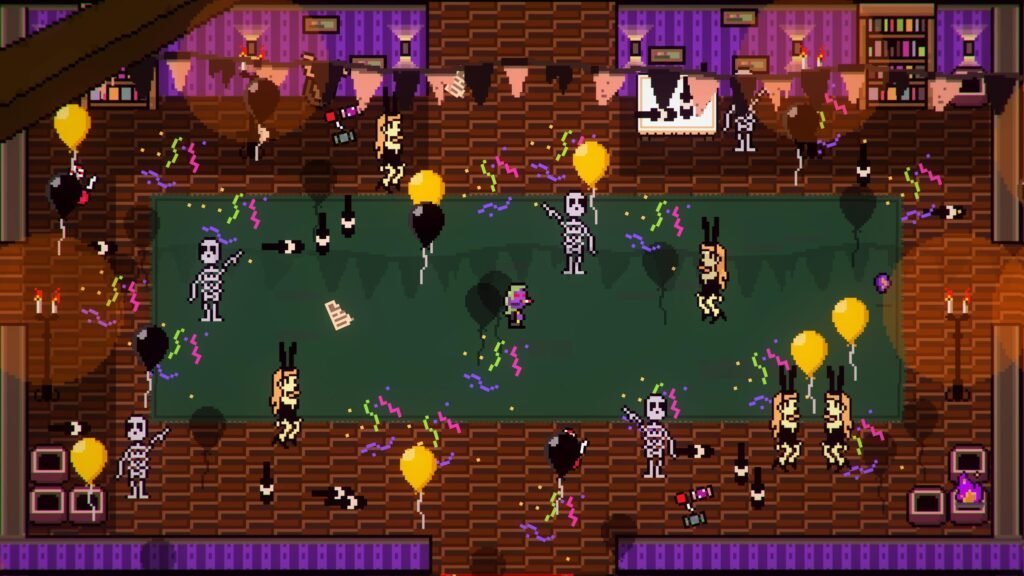 Then there is one puzzle… THE puzzle. Possibly one of the most creative puzzles I have ever experienced had me absolutely stumped. You are given a pair of clues that relate to a six digit number combination. The solution is given within the context of the clue but to actually find it requires the player to think (look) outside the (game’s digital) box… upon finding the solution I was very impressed with it and it’s one I will always remember when I’m thinking of great pixel art adventure titles. 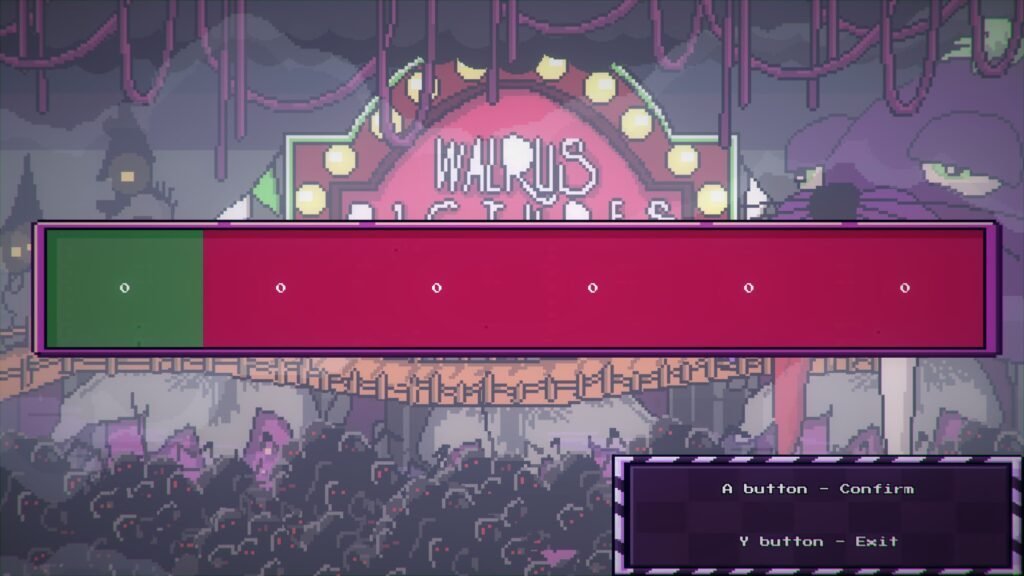 With story progression the player is able to eventually sprint and spit fire and ice based on special cigarettes that are unlocked, introducing light combat situations which of course are made complete by boss battles against gigantic monstrosities. The combat works fine, it’s extremely simple and as it’s not a primary mechanic or focus of the experience, gets the job done without wowing or disappointing. It’s kind of just there. Like this… 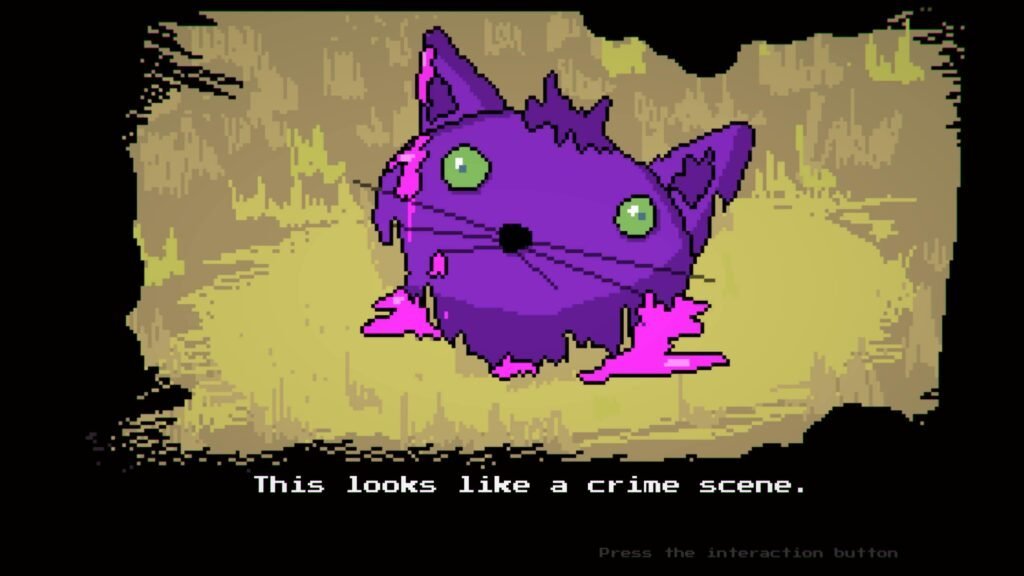 Playful 8-bit visuals give Baobabs Mausoleum that retro charm found in this genre of titles that many of us still cherish to this day. The art design is very creative, unusual, disturbing at times and outright nuts at others. The score is mostly upbeat, funky and of course quirky and the equally out-there sound effects are amusing and work well within the rediculousity of the world. Yes, I made that word up to prepare you for the creative word wizardry found throughout this entire experience. 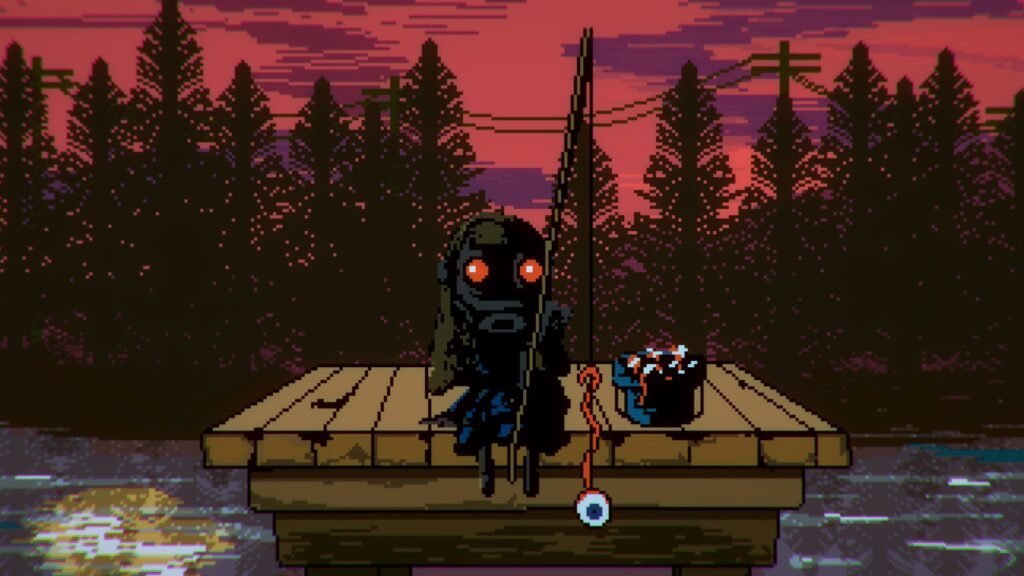 Baobabs Mausoleum: Grindhouse Edition is a world full of oddities that are entertaining and nonsensical and puzzles and fetch quests that are enjoyably clever and challenging. The overall presentation and experience can only be described as batsh*t crazy! 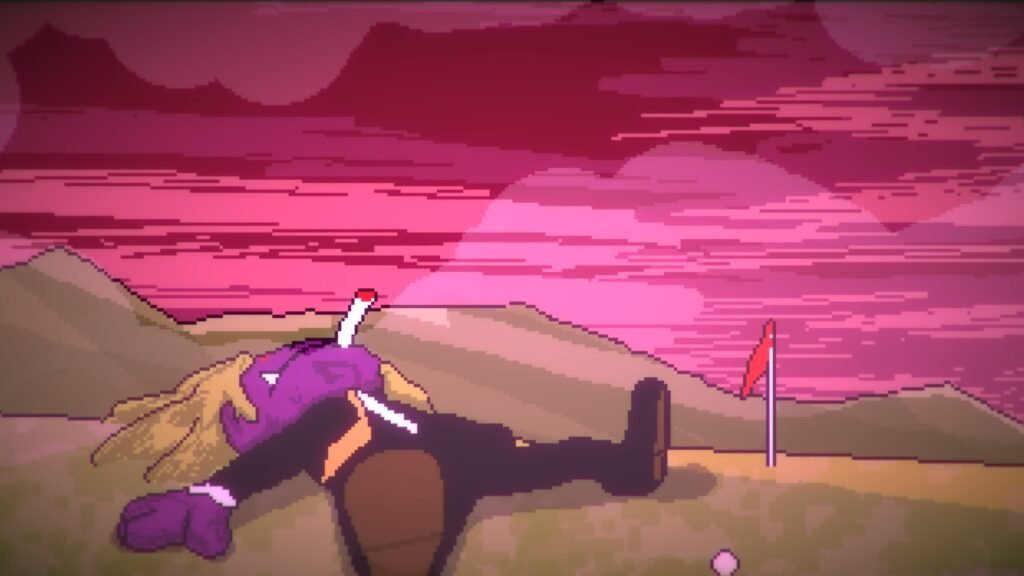 – Navigation can be difficult even with the map All images were captured by Games of DAYNE in-game on Xbox Series X. More images can be found below.