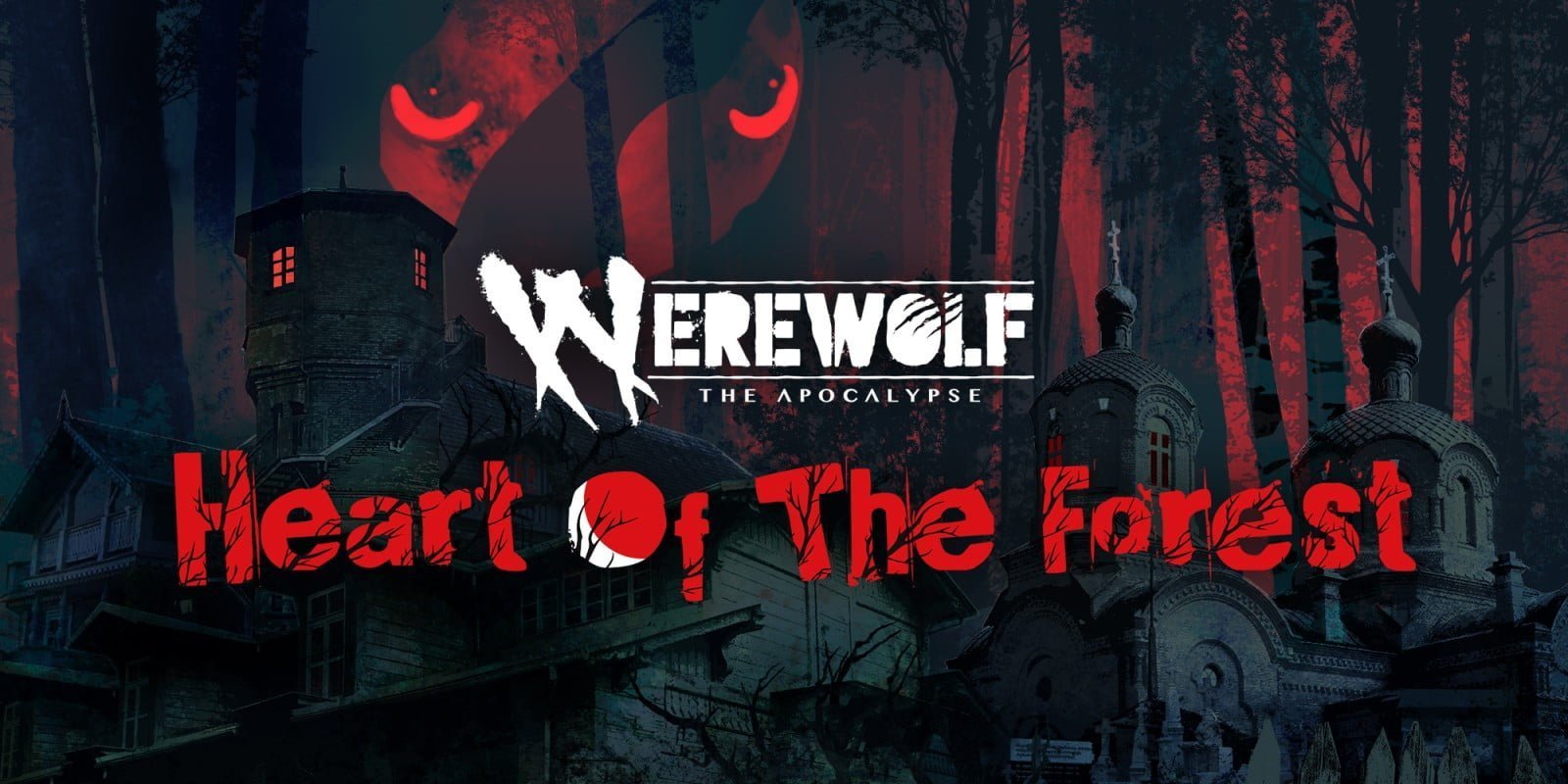 The World of Darkness, established as a series of tabletop role playing games dating back to 1991, has seen a few entries into the realm of video games in recent years, particularly with its Vampire: The Masquerade series.

Playing as Maia Boroditch, the player embarks on a journey of self discovery and emotional turmoil – do you succumb to your rage and unleash the beast within or do you keep a level head. In Heart of the Forest, the choice is yours.

An American born of Polish descent, Maia has been plagued by twisted dreams of wolves and a forest. Travelling to Bialowieża, Poland to discover her family history, Maia arrives to find the local forest targeted by loggers that is met with activist resistance. The people she meets have secrets themselves and the bond she shares with them can be as easily forged as it can be broken based on the decisions made by the player. 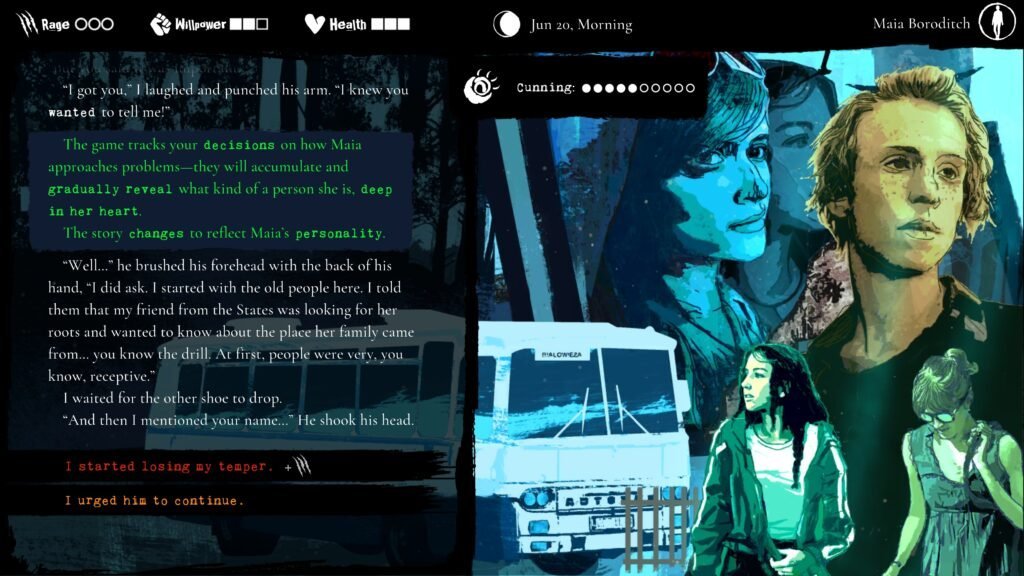 Heart of the Forest is text based and allows multiple choices for the player to shape not only Maia’s allegiances and direction of the story but also her Rage and Willpower. Certain decisions will increase either of these stats and they can be used to make certain decisions that will also consume them. Selecting an option that uses Rage or Willpower now may close off the possibility of using it later. This balance of how Maia reacts on a character level is a fun dynamic to maintain and explore in multiple playthroughs. 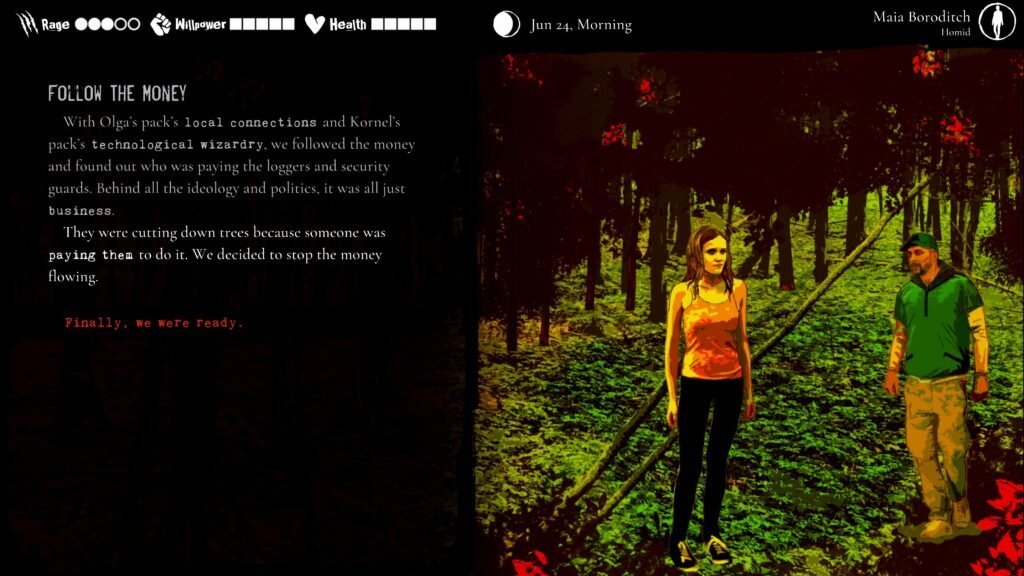 The story is told entirely through text, with lengths of text to read that describe the scene, Maia’s thoughts and conversations with other characters. This visual novel approach allows for an authentic novel-like experience that provides greater depth and detail to not just the story but the world in which it is told. 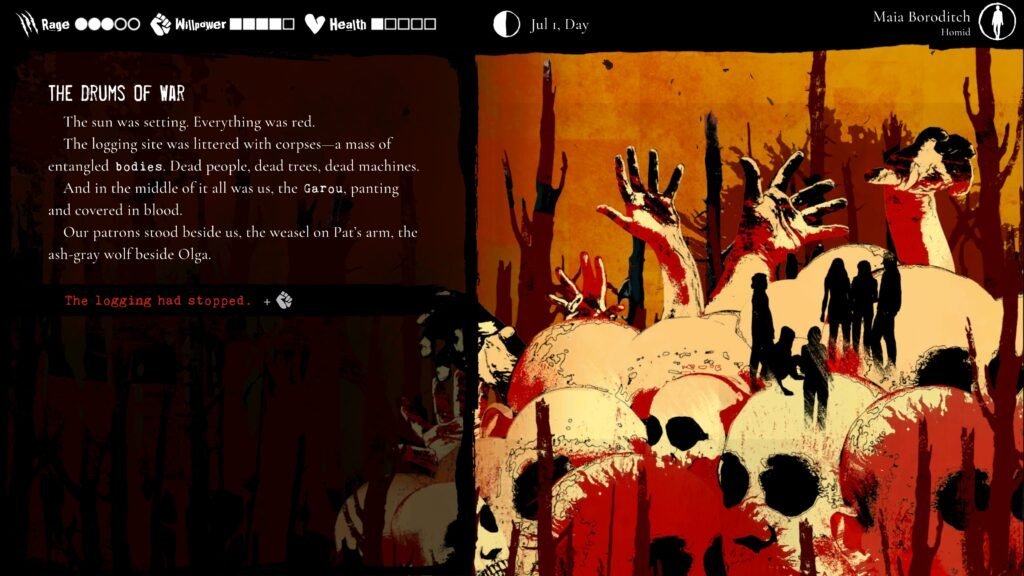 The imagery of each scene starts in one state, typically at least somewhat animated but as the scene progresses, decisions are made and actions happen, the scene slowly evolves and gets more animated and alive. Beautiful art design brings the story to life through this stunning imagery that compliments the excellent depth of the writing. 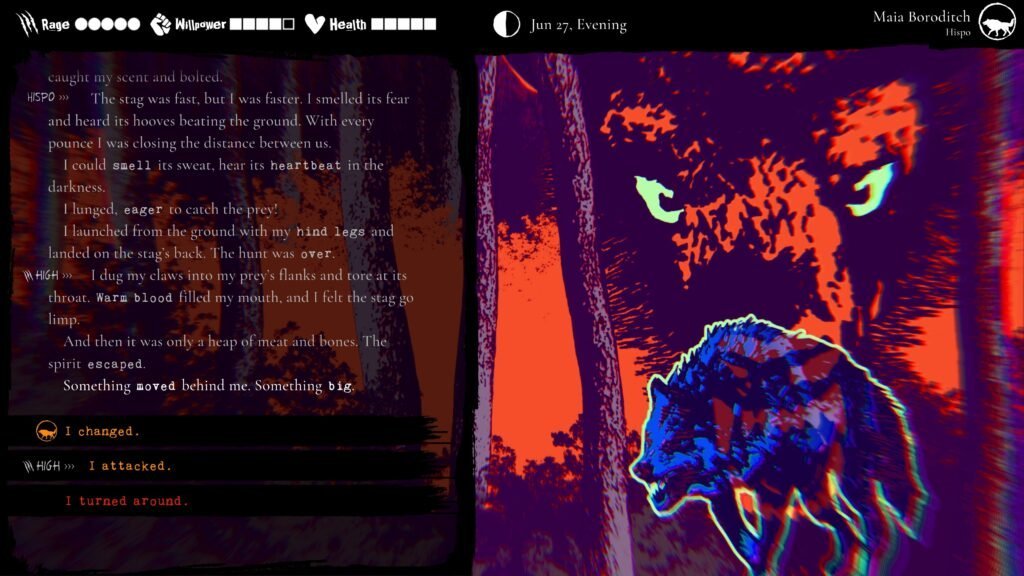 As the Werewolf mythology is introduced, the player is able to choose which of the five forms they would like to adopt for the upcoming events. The ability to make these kinds of choices really give the player a sense of control of their Maia. She can be ruthless and aggressive or passive and timid, and the forms she can take compliment these characteristics well. The lore is so rich, interesting and somewhat complicated but it’s the complexity of it that really draws the player into the world in an enjoyably challenging way. The depth of the storytelling within the confines of a visual novel I feel are a fair representation of experiencing an authentic tabletop experience, albeit a much smaller chunk. 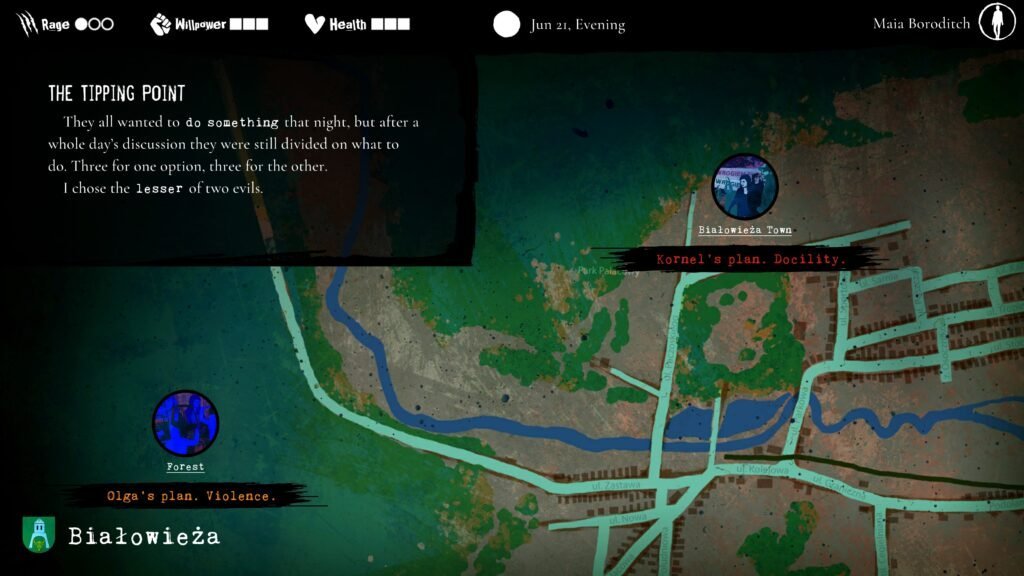 At certain points the player is able to look at a map and choose where to go. This choice will close off the other options for this playthrough, encouraging replay to make different choices another time around. The decisions change the story greatly, with five unique endings that will have seen certain characters live or die and key events swing one way or another. A typical playthrough will take between 4 to 5 hours, dependent on the players reading speed of the extensive amount of text to read and decisions to consider. 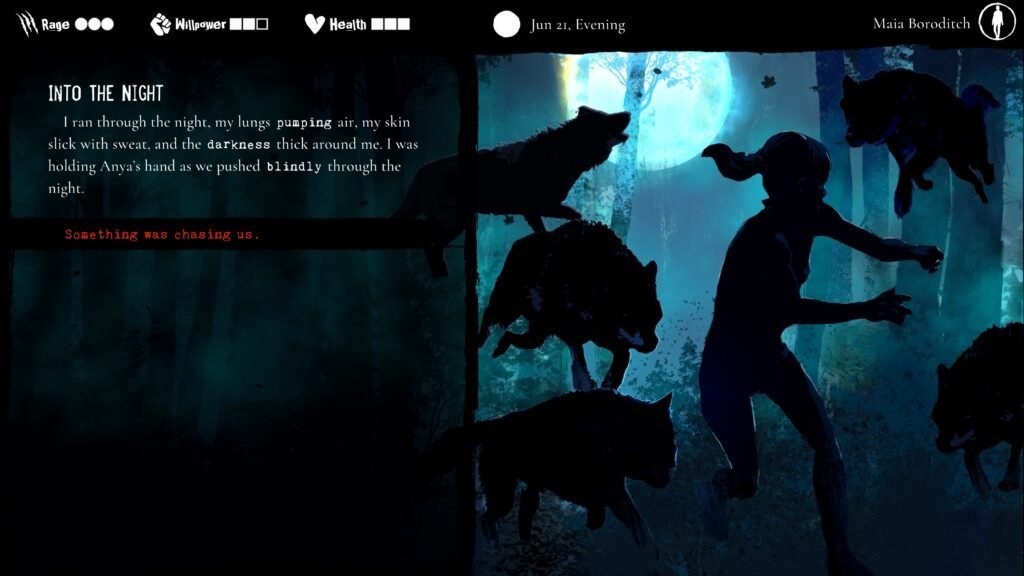 Drawing loose inspiration from an actual protest in 2016 at the Bialowieża Forest that much of the game takes place in, Different Tales have cleverly characterised the forest as more than just a background to the mythologically rich tale that takes place within it. Environmental activism and the cultural significance of the forest are just as important as the mythology and Maia’s story. 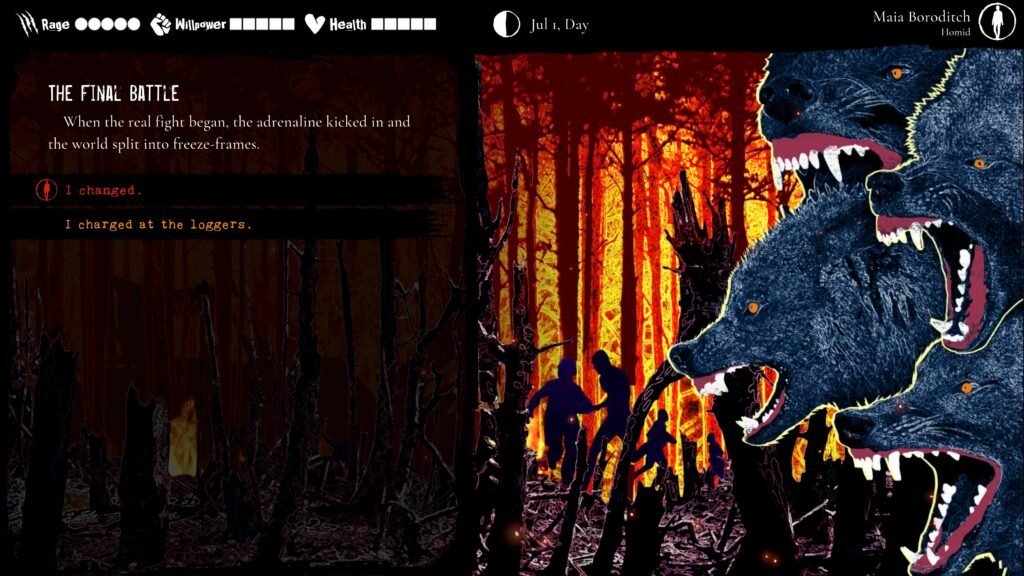 With every choice that is made and meaningful interaction that takes place, the Journal is updated to reflect this information. This feature allows the player to look back on their actions and reflect. The Character Sheet, which is very similar to that used in traditional table top experiences, shows Maia’s relationships and standing with other characters as well as character and personality traits. Each of these features are under-utilised and aren’t particularly well explained. 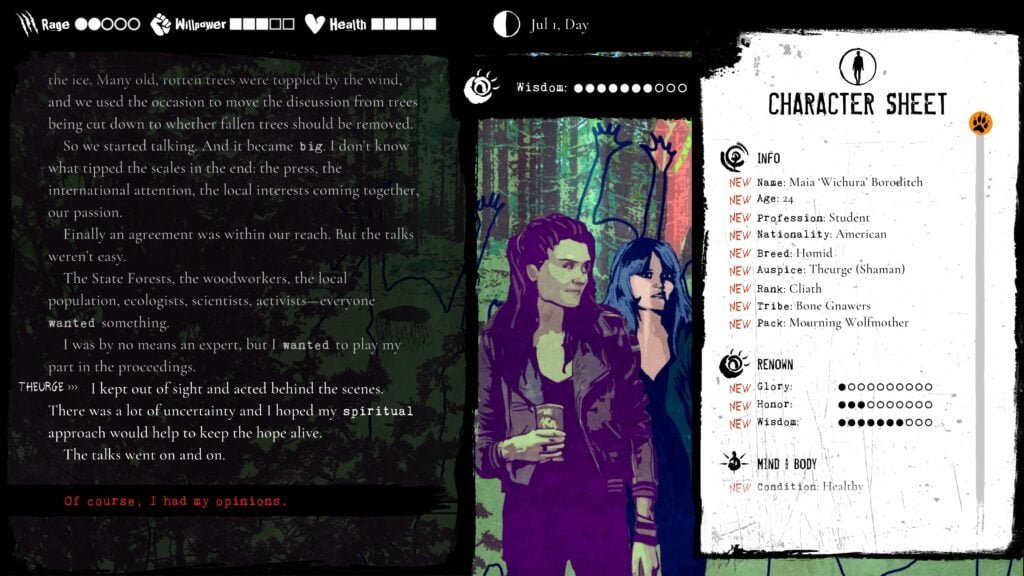 Werewolf: The Apocalypse – Heart of the Forest brings a depth to the experience that is a little overwhelming to those with little to no knowledge of the source material. The most important concepts are explained however and there is enough information in regards to the broader mythology for the player to comfortably follow along and understand the narrative. The visual novel approach adds layers to the story that bring dimension to the text based story. Stunning art design and an appropriately haunting and melodramatic score wonderfully compliment the storytelling and the direction the player chooses to take their story. 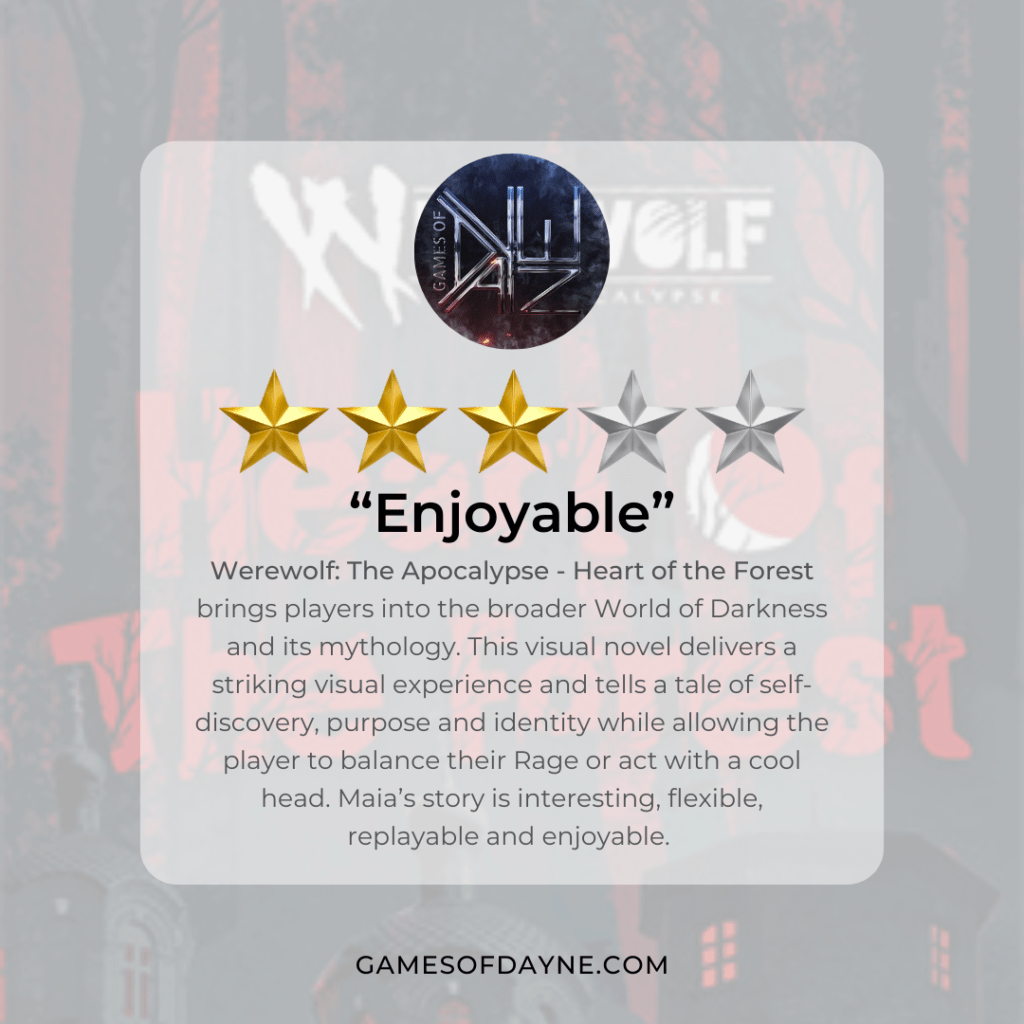