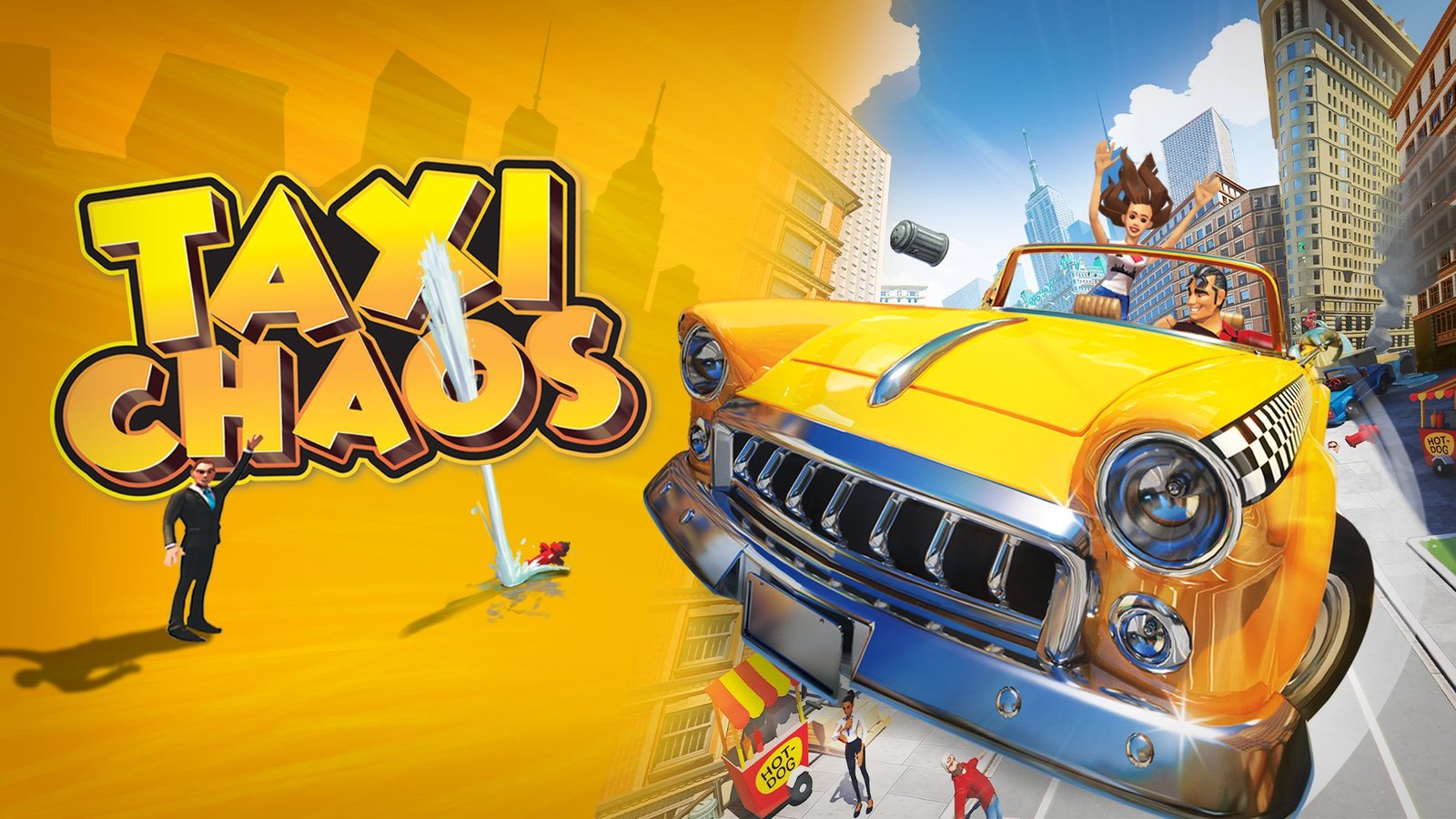 Taxis are a service we’ve all used. Sometimes we need to get from A to B when we’re out of town on holiday, maybe our car is broken down or maybe we’ve had a big night out. We pay for this service and expect to be delivered to our destination in a reasonable time and safely. Enter Taxi Chaos.

Put in the role of a taxi driver in New Yellow City, our mission is to get our passengers where they need to go but unlike real life, we don’t have to and likely won’t be doing so safely. Boosting, jumping and cutting every corner possible, Taxi Chaos allows players to drive like maniacs and whether we get our passengers there on time or they jump out of the car if we take too long, it doesn’t matter. The wild ride is ours to control in the style of the classic old-school taxi titles of the past such as Crazy Taxi.

Taxi Chaos presents 3 modes to play, all of which are single player only. Arcade, Pro and Freeroam. After selecting a mode to play the player can choose either seasoned cab driver Vinny or the influencer Chloe as their taxi driver and can select from a handful of cars. Only one car is available at first with the rest requiring certain conditions to be met to unlock  which are all relatively straight forward. The different cars have different specs for speed and turning for example. 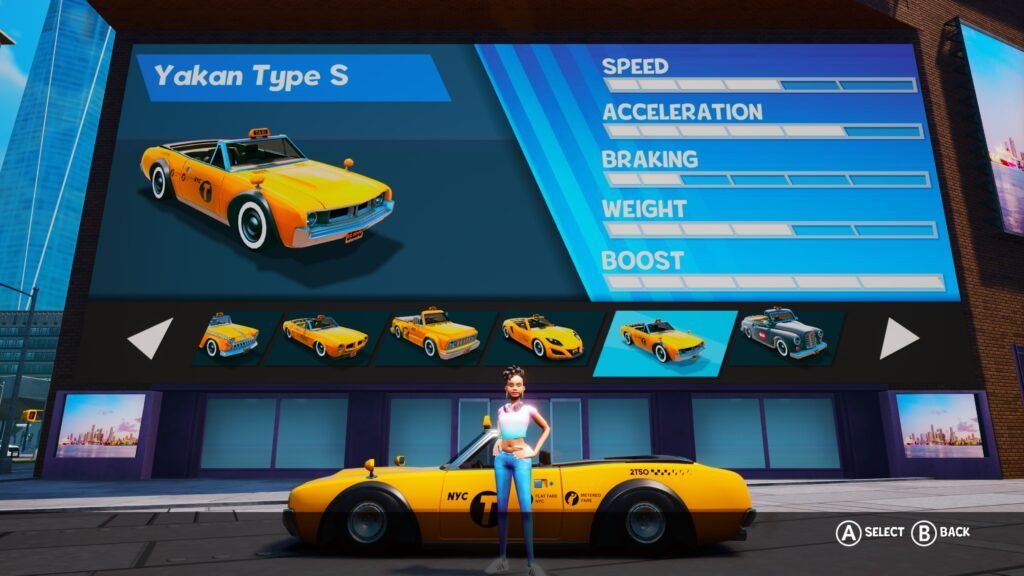 Arcade mode starts the player with 90 seconds on the clock, with time only being added by completing fares. The objective is simple, pick up and deliver as many passengers as possible. While not actively delivering a passenger people are found throughout the city with glowing blue rings around them, indicating they have a fare available. Before selecting a fare the player can observe a clock icon that indicates how close or far their destination is with real or green suggesting as little as two or three hundred odd meters away while red fares could be over a kilometre away. The longer the fare, the longer the player will have to deliver the passenger. The destination will be displayed in the bottom left corner and a waypoint arrow is visible in the top centre of the screen. When the destination is visible the player will be able to see a blue glowing box with a giant red arrow, indicating this is where the taxi must park to complete the fare. The crazier you drive, the wilder risks you take with jumps and near misses for example will increase the rating of the fare. 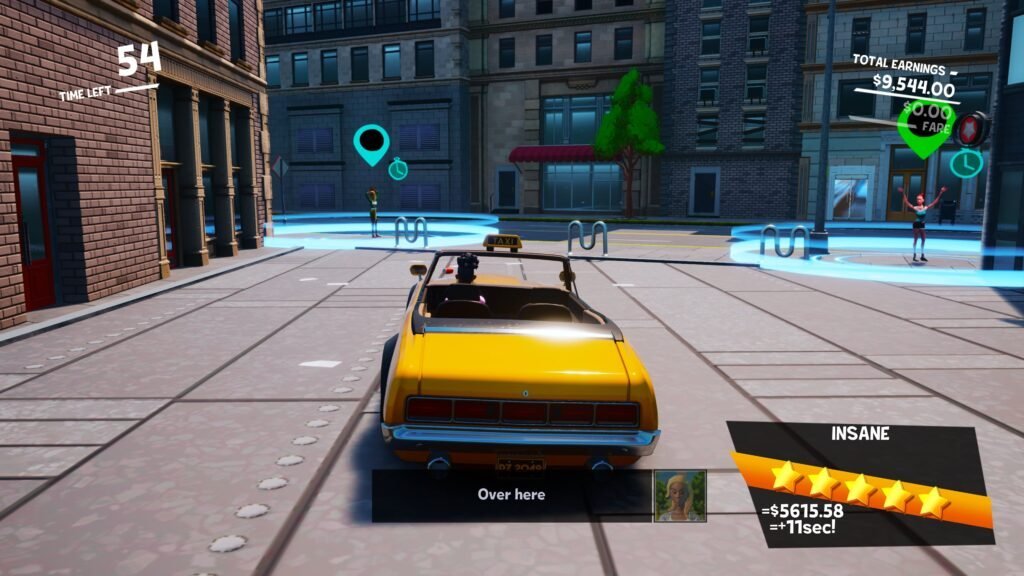 Taking into account the players timer that continuously counts down, increased as mentioned by completing fares, each passenger also has a timer to be delivered before they will bail on the ride by simply jumping out of the car. Seems a bit extreme but amusing nonetheless. An incomplete fare will result in no time added to the clock and no money earned. The purpose of money earned is simply for the players session score when the game ends upon the timer reaching zero. Sessions are graded out of five stars which is based on how many fares are completed and the individual five star rating system of said individual fares. It’s a shame the money earned can’t be used to unlock anything such as mods for the cars, decals or even other drivers. A little customisation would have been nice. 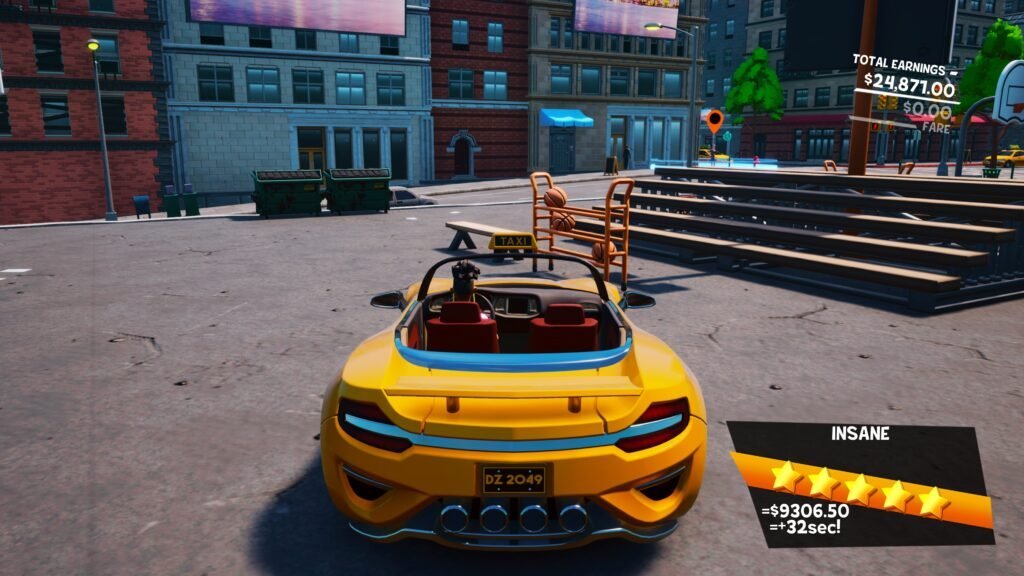 Pro mode ramps things up pretty dramatically by removing the waypoint, requiring players to become very familiar with the map to be able to complete fares within the same time constraints. Luckily the map is a generous size, it’s not too small but it’s not too large for this game mode to be impossible. With an assortment of landmarks scattered across the city it isn’t too difficult to gather a lay of the land and become familiar with the map. As the image of the destination is still visible to the player, it is possible to happen upon it without actually knowing where you’re going. By remembering that teal or green fares are nearby to where the fares start, and orange or red indicating a further distance, the player can have at least somewhat of an idea as to how far the destination may be. This mode is certainly a challenge initially but does get a little easier with recognition of landmarks.

Freeroam simply removes the players session time limit, allowing for an unrestricted play session that can last as long as you want. The fares however continue to have their timers in place but as the importance of their extended time bonuses no longer apply, the same pressures are not present. This mode is perhaps best used to get familiar with the map for Pro mode or for the 10 quest lines attached to specific passengers.

The quest lines each start by picking up one of the 10 unique characters and successfully delivering them to their destination. You’ll then be tasked with finding 3 collectibles that are unique to them, highlighted in the environment with a pulsating blue orb around them. These passengers will not appear again until their collectibles have been found. Upon their collection, the character will reappear, can be delivered to another destination, and will be sent to find another 3 of the same collectibles. With the second set collected, one final fare will complete the quest line. These characters offer the most amusing dialogue and banter due to their quirky personalities. These don’t award anything other than an Achievement/Trophy but the added challenge of finding the collectibles is enjoyable as they will sometimes require the player to jump to the top of buildings to find them. Driving across rooftops adds a platforming element that can be both fun and frustrating as falling back to the street means the ascent has to begin again. 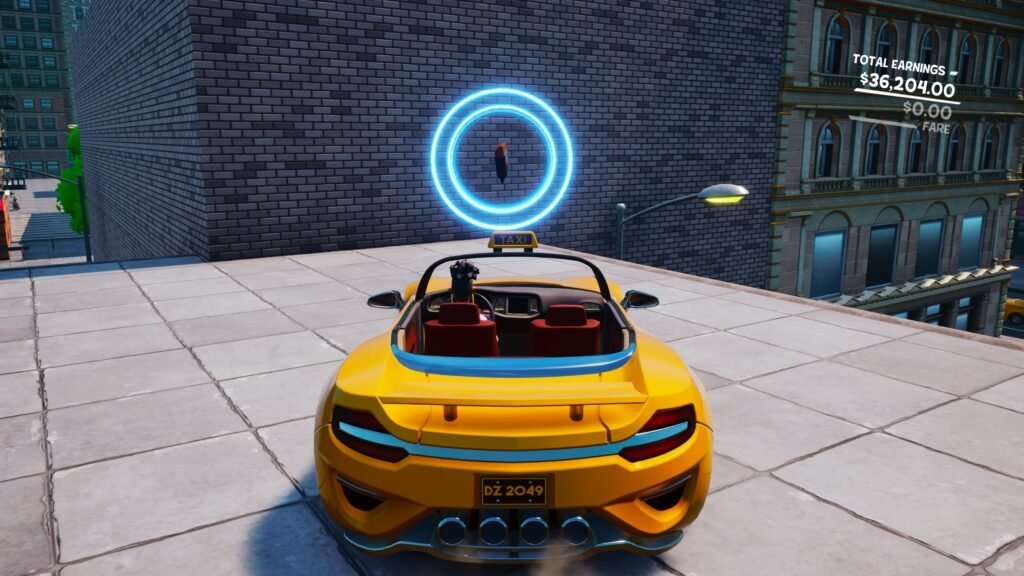 There are personal and global leaderboards for the players score to be tracked on. This feels like a missed opportunity for any form of multiplayer component, whether local or online, some sort of competitive element outside of statistics would be a lot of fun. The thought of delivering a passenger while seeing one or more other players driving like lunatics or even hindering your progress would add a lot to the chaotic nature the title of this experience implies. 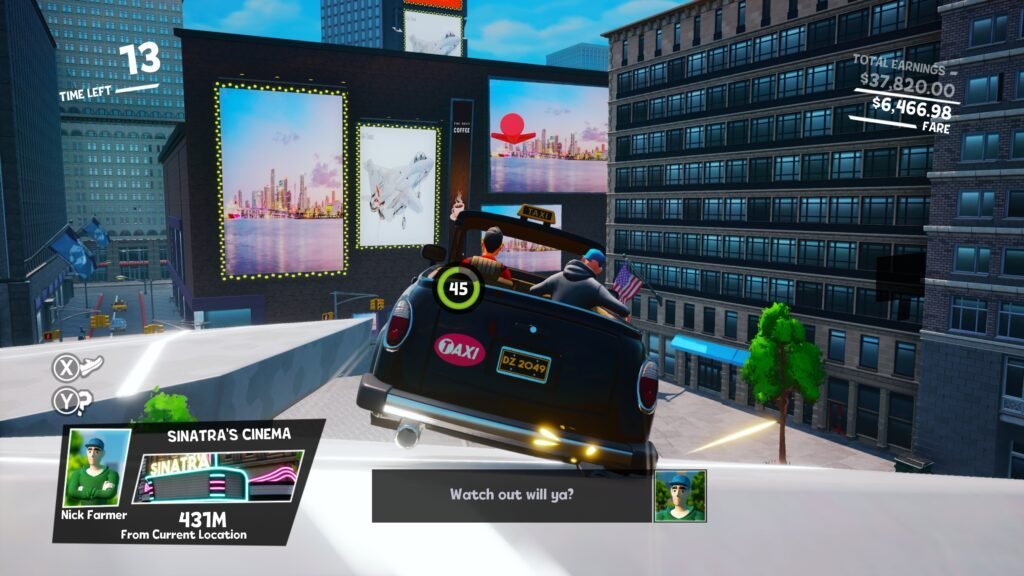 Lacking any kind of career mode or story as such Taxi Chaos attempts to tell brief stories of the passengers we pick up. Whether it’s where they are going, what they are doing or telling us to mind our own business, each passenger has something to say. The same conversations unfortunately are repeated by different passengers regardless of gender. Two consecutive fares can have the exact same conversation play out between the passenger and the player. There is slight variation when the player is playing as Vinny or as Chloe but not enough to feel meaningful. The passengers in suits have the same dialogue and the passengers in tropical shirts all have the same dialogue for instance. This restricts the personalities on display in a manner that leans into repetition. If the player doesn’t pay attention to the people they pick up, it is possible to be to stuck with the same conversation fare after fare. Most of the dialogue is still amusing and a few of the potential passengers are a pleasant surprise. Rockstars, stern business men, an alien… wait… what? 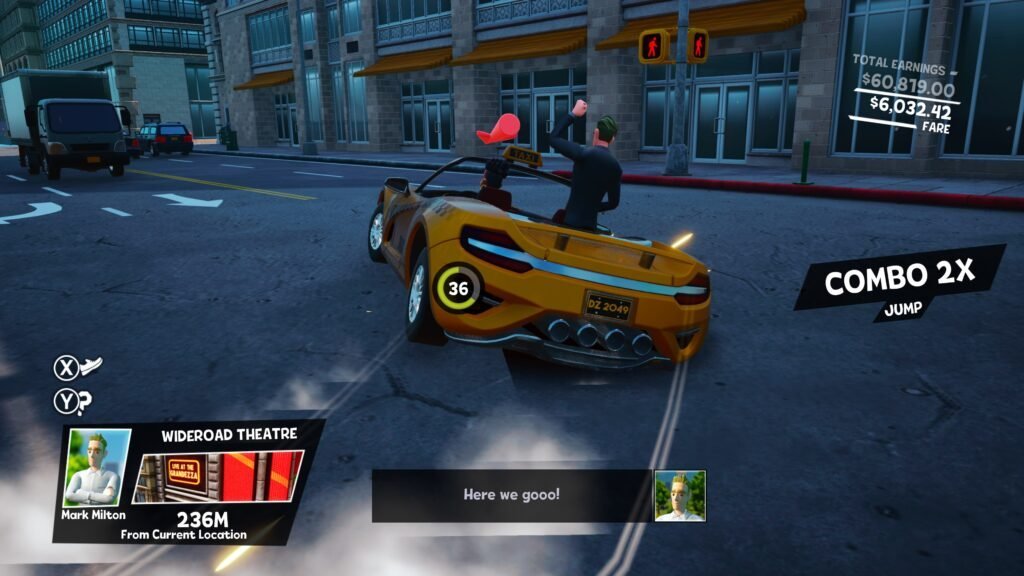 The visuals are playfully simple, presenting a casual tone that keeps the experience light and fun. The cartoonish character design works well as do the vibrant colours of the cars and the environment. The soundtrack is upbeat and funky, again keeping the tone light while helping the wild joy rides feel amusing and unpredictable. 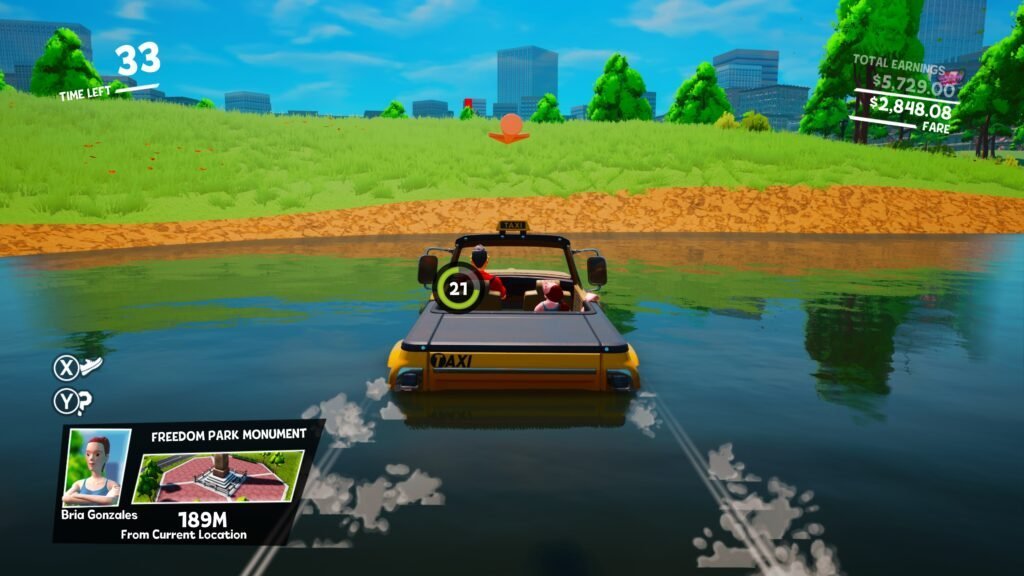 Taxi Chaos isn’t quite as chaotic as it could be. By offering little more than travelling at decent speeds, jumping and crashing into or through things, the chaos is limited to the shortcuts that can be taken, including using ramps and driving across the rooftops. Shorter play sessions are more enjoyable as after too long the experience feels rather repetitive. The challenge of Pro mode and searching for the unique characters that have quest lines and their collectibles are welcome addition to keep the gameplay engaging and challenging though the inclusion of any sort of local or online competitive modes would have gone a long way in increasing the longevity of the experience.