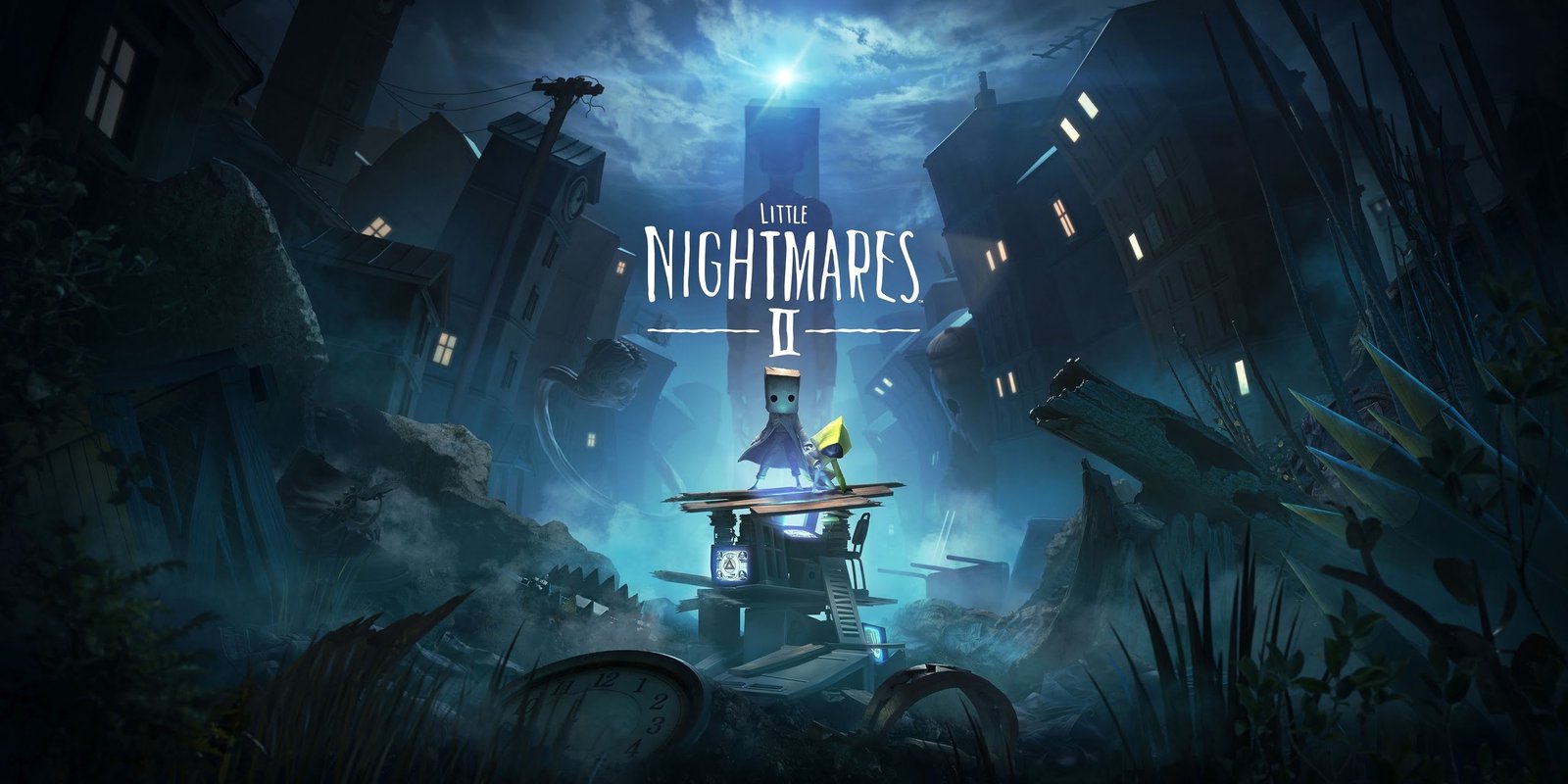 A gritty, disturbing world within a twisted reality again becomes the backdrop to torment a child protagonist in Little Nightmares II. Set before the events of 2017’s Little Nightmares, Tarsier Studios have once again delivered an eerily atmospheric puzzle-platforming horror adventure with the creepiness dialed up to max.

Falling bodies, flesh puppets, psychotic children made of porcelain and fiendish monstrosities haunt Mono, the series’ new protagonist, as they venture into the unknown with their new friend, Six, the playable character from the original.

As a prequel, Little Nightmares II wonderfully expands upon the story of the yellow trenchcoat wearing Six. Despite some significant character developments for Six along the way, this experience is largely still cantered around Mono. By default, Mono wears a paper bag on their head with holes cut out for the eyes. Why? We don’t know but it works. As with the original game this title raises as many questions as it answers. Without a spoken word of dialogue or a single line of text to call upon, the narrative that unfolds manages to tell an excellent story while also leaving an ambiguity to it that allows the player to speculate with what certain things all mean. 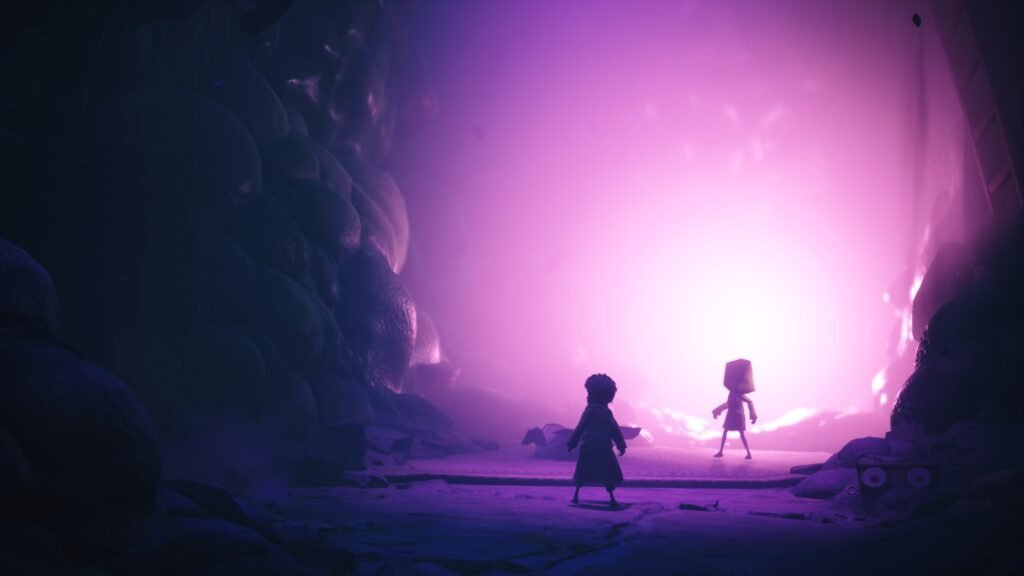 With the story taking as little as three hours to complete the five unique locations that comprise the five chapters offer different atmospheres and levels of tension. An unsettling fog looms in the woods, home to a trigger happy hunter, wild and unruly porcelain children and their menacing teacher haunt a decaying school and a hospital beyond redemption are just three of these unique locales. 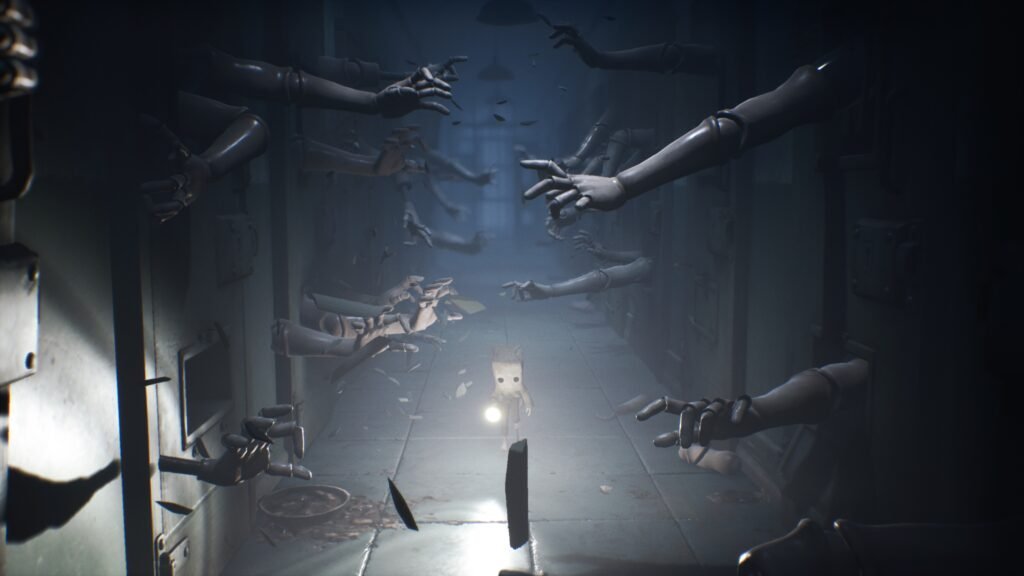 Distributing the gameplay emphasis between stealth and platforming, Little Nightmares II maintains its tension through a moody ambience and its gritty colour palette with beautiful attention to lighting. Darker sections rely less on platforming and puzzles, focusing more on utilising a flashlight while lit environments would emphasise the opposite. This contrast both visually and on a gameplay level cleverly keep the chapters fresh, distinct and unpredictable.

It’s difficult to discuss much of the narrative without spoiling anything. Being a prequel, Little Nightmares II doesn’t shy from the fact it is telling an origin story for Six. Six’s evolution however can only truly be appreciated by having experienced the first title. Key moments throughout the adventure are satisfying, shocking and thrilling, offering a genuinely unpredictable experience that expertly tells a self contained story while also enriching the overall story arc between both games. 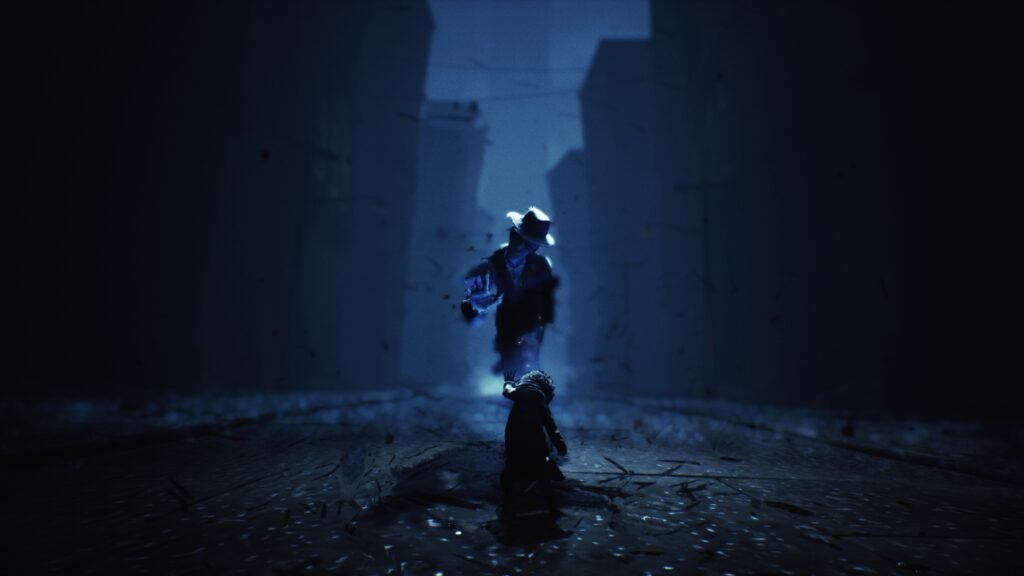 Use of running, crouching, sliding and jumping will allow Mono to traverse the platform-heavy stages. The platforming elements typically relate to climbing and jumping across gaps while the puzzle solving typically relates to using the various platforming mechanics to find items to open doors or activate levers and switches for example. The puzzles are all very simple to solve with reasonable exploration and aside from some tight gaps to jump the platforming is relatively accessible as well. 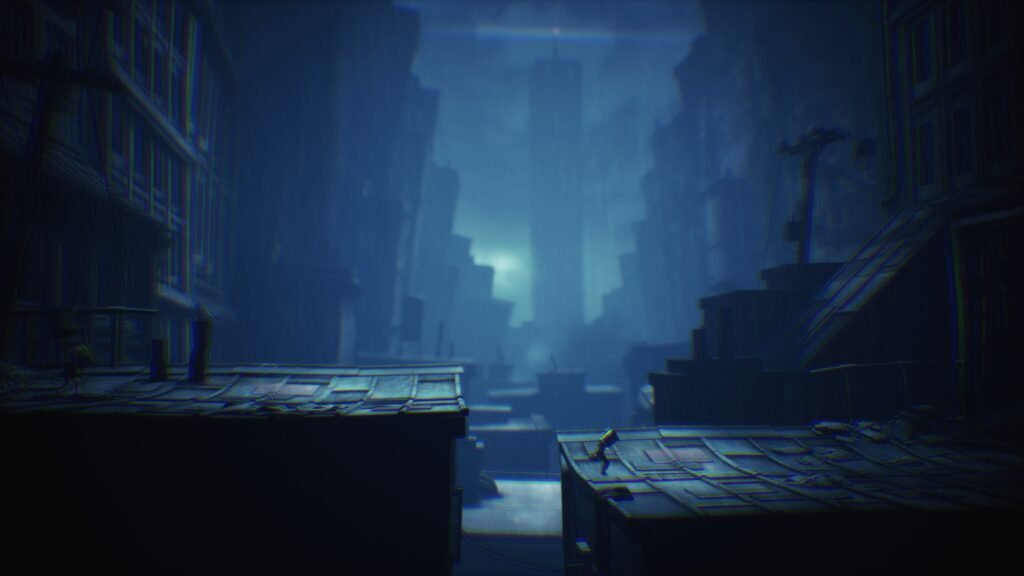 There’s no combat as such as in most cases enemies need to be avoided instead of defeated. There are however a handful of instances where objects can be used as weapons. This blend of cat-and-mouse evasion and just a tease of combat works well, and the balance is correctly focused towards the former. A number of enemy encounters are present throughout the game that can only be solved with stealth, evading the enemy by lurking in the shadows or undercover while not making any noise. In most instances detection will lead to death but a very generous checkpoint system returns the player to mere moments ago to try again. 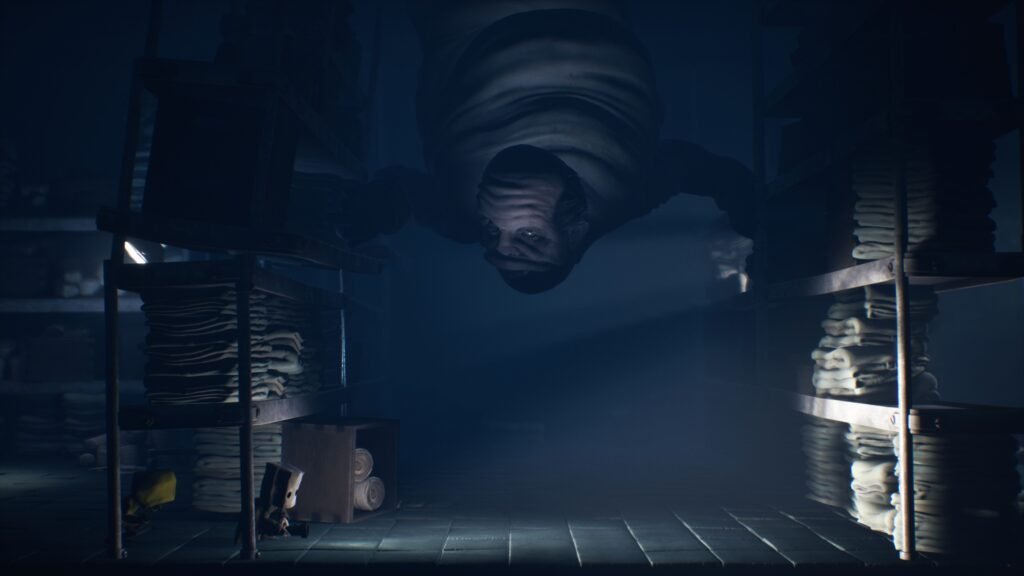 Throughout Little Nightmares II there are a number of actions that can only be performed in unison with Six. Mono is able to get a boost from Six to reach higher platforms, jump across ledges and catch Six’s hand to be pulled up and working together to push, pull or open doors for example comprise the bulk of this co-operative gameplay. It’s important to note that despite the co-operative relationship between Mono and Six, Little Nightmares II is an exclusively single player experience. 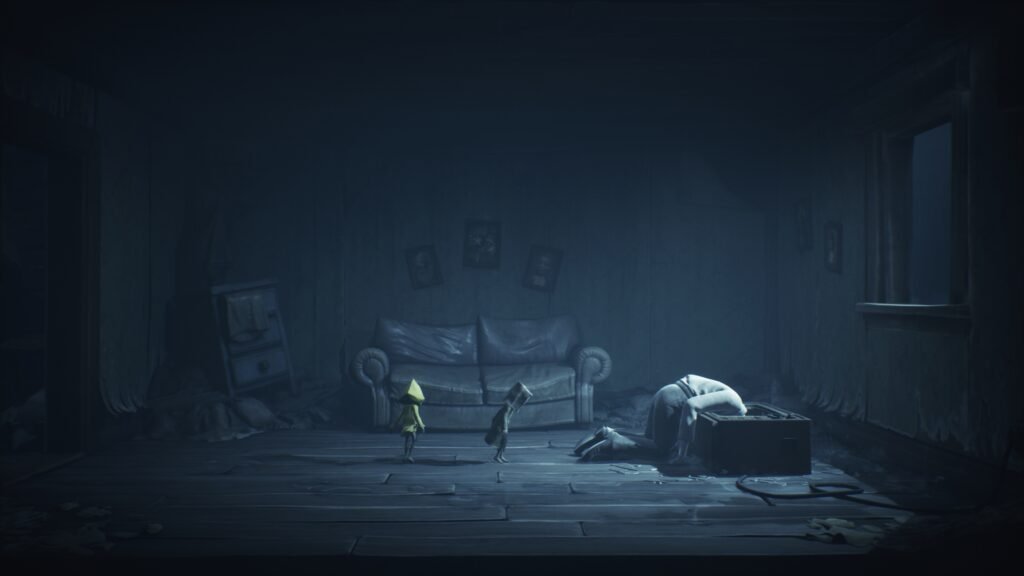 Throughout the game there are collectibles in the form of Glitched Remains, distorted echoes of souls – or at least that’s my interpretation, and hats. The hats when found can be equipped and purely alter the cosmetic appearance of Mono’s head, switching out the default paper bag for a teddy bear mask or a postman’s hat for instance. These offer no gameplay advantages and merely provide alternate appearances for Mono.

The world of Little Nightmares is dark, dirty and gritty and despite this it manages to feel very much alive in a dark and twisted way. There’s little in the way of vibrance or illuminated brilliance, there’s just varying levels of decay and disrepair that are visually beautiful in their own way. The visuals overall are stunning with the lighting, rain and water looking absolutely incredible. Slick animations and creepy character models keep the affair tense and fluent. 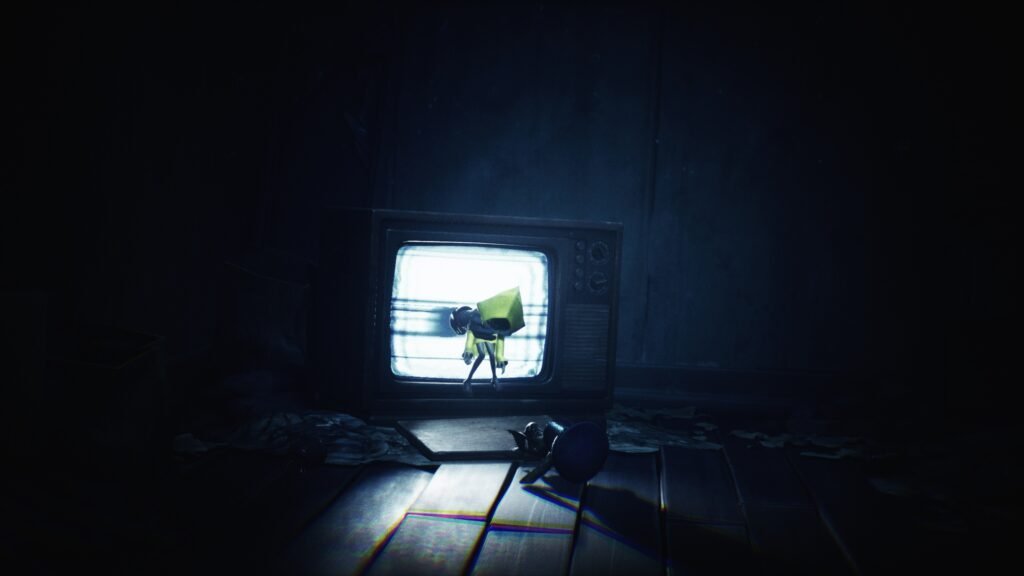 Sound design is next level with a truly haunting score with disturbing sound effects and howls. It’s hard to imagine a world so well developed and a story so masterfully told with dialogue but Little Nightmares II gets the job done in bar-raising fashion. 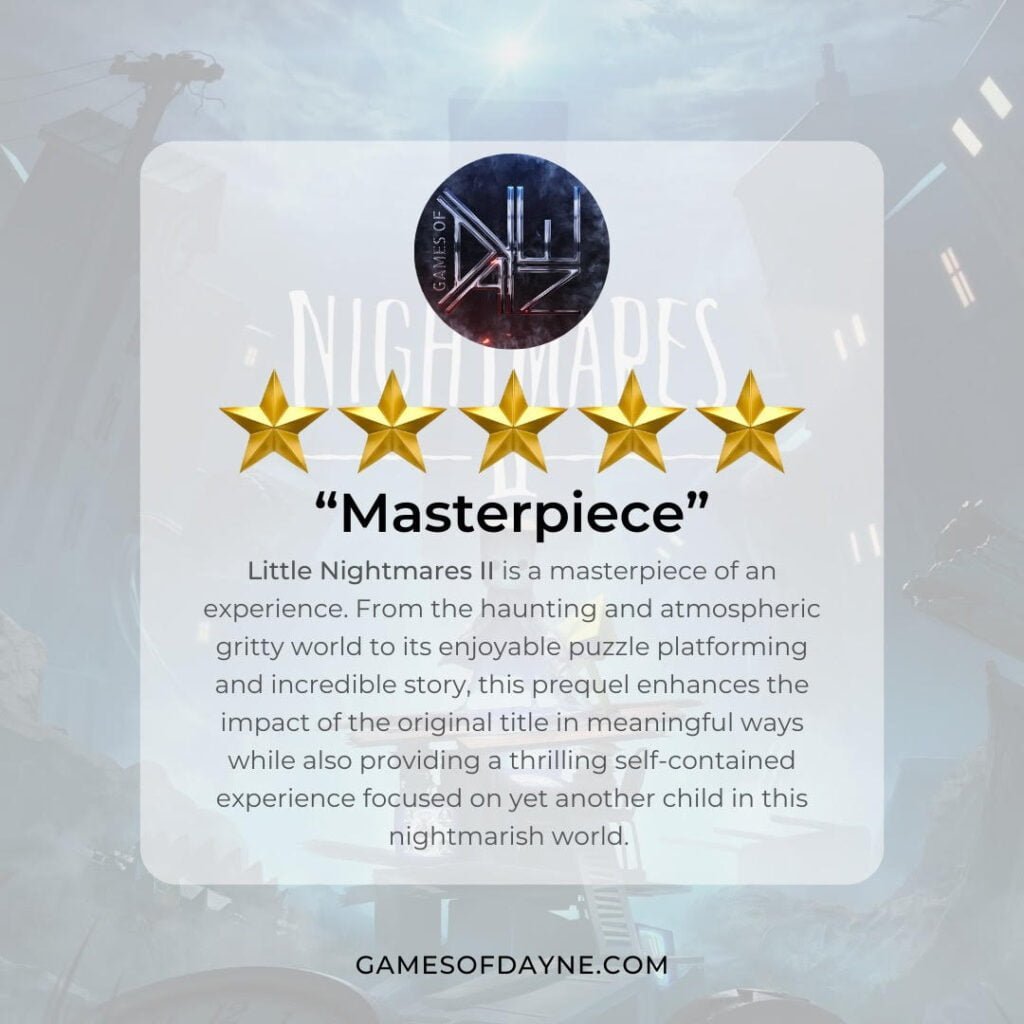 I am Dead Review