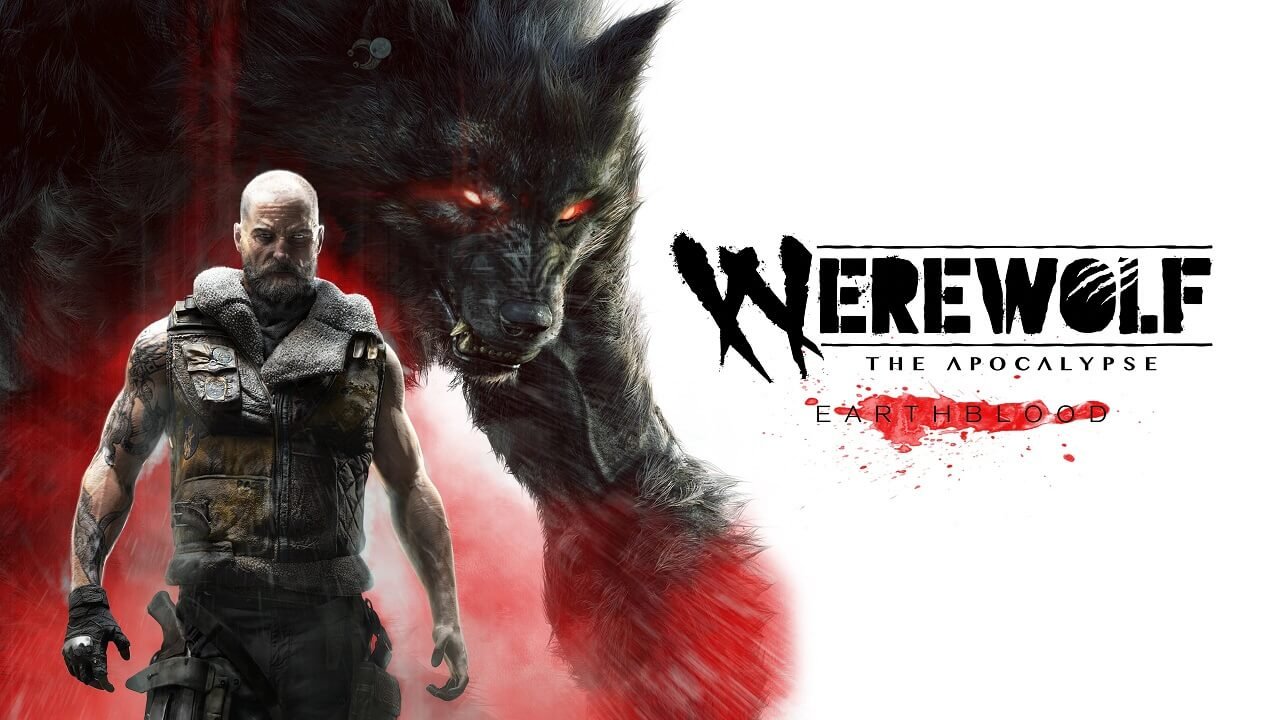 An adaptation of the 1992 tabletop game of the same name that continues to see success and popularity nearly 30 years later, Werewolf: The Apocalypse – Earthblood puts players in the role of Cahal, a Garou that has the ability to transform into a wolf, known as a Lupus or a raging werewolf known as a Crinos. Each of these 3 forms have unique purposes and gameplay mechanics that lead to what is perhaps best compared to as a stealth-action adventure.

While it could be argued the stealth dominates the gameplay there is nothing stopping the player from unleashing the beast within and turning the experience into gut-splattering hack and slash-like affair at will. With this dynamic of letting the player decide how they want to play Werewolf: The Apocalypse – Earthblood, Cahal’s path is truly up to you.

Opening with an incredible and epic cinematic, Werewolf: The Apocalypse – Earthblood sets up a tragic narrative. Cahal witnesses his wife murdered in front of him, snaps in a fit of rage, murders her assailant and even members of his own pack. Initiating a self-imposed exile after his loss of control, Cahal abandons his tribe, including his teenage daughter, and embarks on a vendetta to bring down the oil-producing Endron corporation who he holds responsible for the events that lead to the death of his wife. With their hands in weapons, sinister human experiments on prisoners and god knows what else, Endron have a lot to answer for and Cahal will stop at nothing to bring them down. 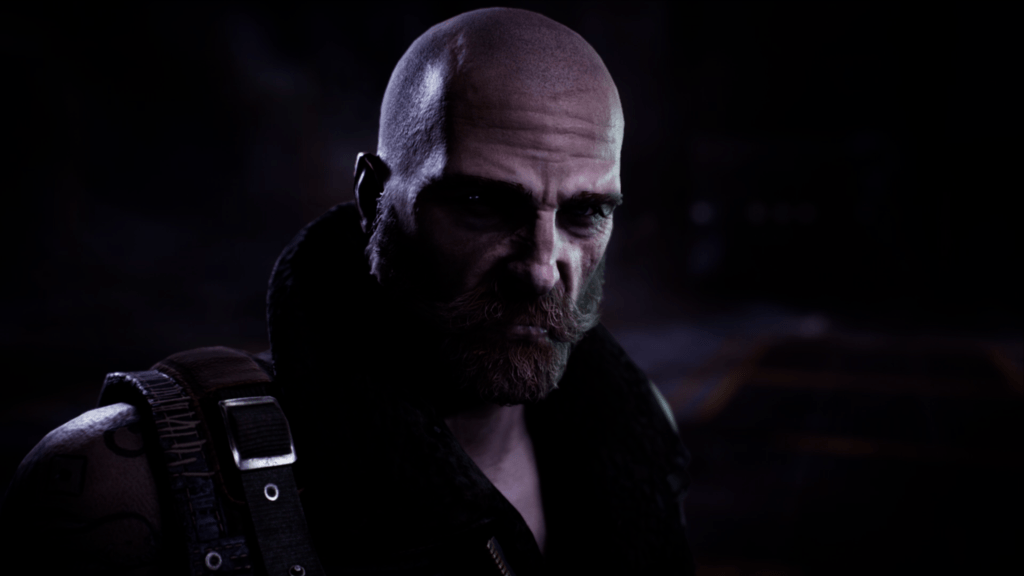 Five years later, Cahal’s pursuit of Endron leads him back to his former home to save them from eradication. The tale that follows unfortunately fails to live up to the interesting premise, sacrificing meaningful character development and compelling story beats for a string of damsel in distress plot devices and character losses that feel empty due to their lack of development or remotely interesting personalities. Aside from Cahal the character development borders on non-existent, making it near impossible for the player to care for a single member of the supporting cast. 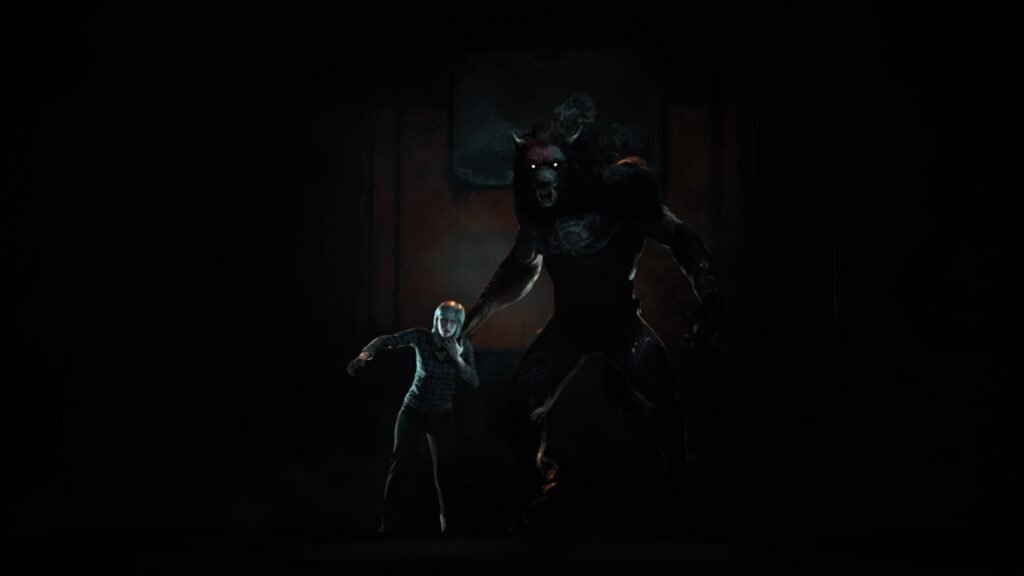 The 8-10 hour story concludes with a pair of alternate endings that both fail to establish as powerful, moving or even interesting, however, the door is left open for future adventures though in an intriguing scene. A handful of dialogue options are present throughout via a dialogue wheel that don’t really impact the direction in a meaningful way. There is of course the option to end most conversations with violence by activating Enrage prompt and transforming, initiating combat and the satisfying and messy distribution of blood. Actions speak louder words after all.

The mission structure for each mission is relatively similar. Infiltrate an Endron compound, sneak through and extract something, plant something or blow something up. In between a handful of missions the player is taken to the home base in the forest to explore or complete optional missions for a fantastical giant talking tree named Yfen, before infiltrating an Endron compound, sneaking through… you get the idea.

The linearity of the missions is extremely repetitive. Along the way there will be a lot of hacking computers to disable cameras and open doors, vents to crawl through in the Lupus/wolf form and waves of enemies to dispose of or avoid in nearly every single room of every overly familiar location. Repetition and familiarity lurk on every mission but luckily the gameplay itself is interesting and engaging enough to overlook the constant sense of déjà vu. Personally, the repitition and familiarity of the level design and mission structure were more frustrating in theory than in practice, pleasantly becoming an afterthought instead of a sour note due to the interesting gameplay. 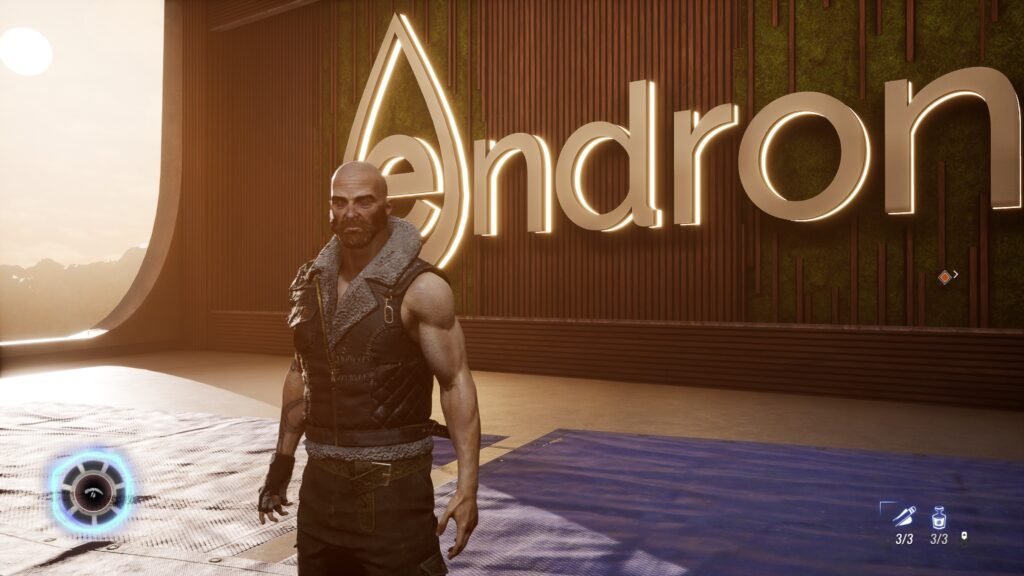 Comprising the core gameplay of Werewolf: The Apocalypse – Earthblood is essentially 3 variations, each associated with Cahal’s 3 forms. Cahal himself is known as a Homid, the human form to the spiritual package he finds himself blessed with. Cahal can not engage in combat with the exception of stealth takedowns or use of a crossbow to eliminate enemies or disarm security cameras, turrets or reinforcement boxes to lighten the offensive load should he be detected. There’s no melee or gunplay combat for Cahal and this is to place the focus firmly and appropriately on the combat of his Crinos/werewolf form. Cahal automatically crouches in areas where stealth is recommended but the sprint button, awkwardly assigned to RT/R2, can still be used to move things along faster while remaining quiet. In areas with no enemies Cahal is able to sprint normally. 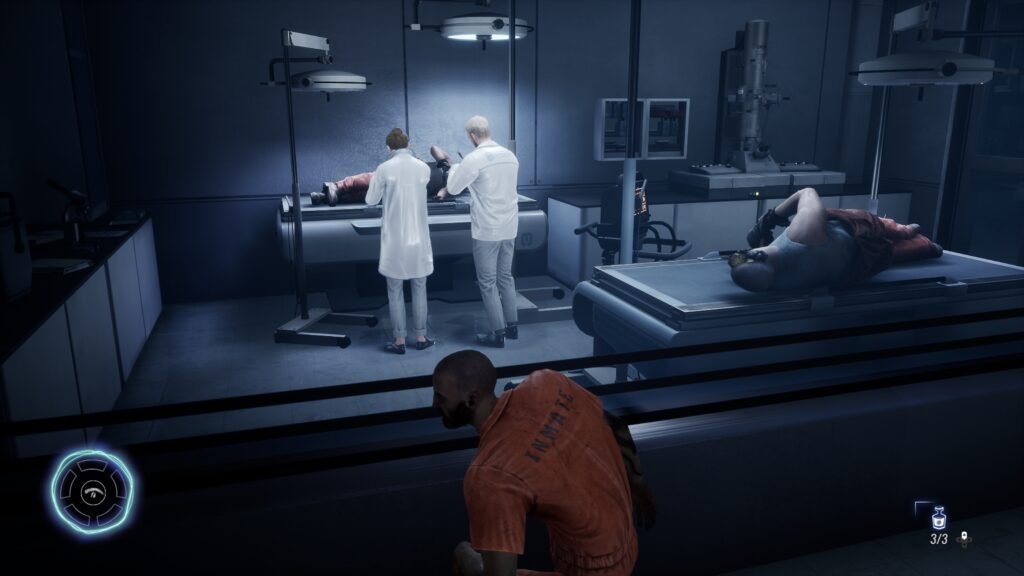 Cahal can interact with computer terminals, primarily to toggle security cameras off, which will otherwise alert every enemy in the area to his presence, or to to open doors to progress. There are flasks which can be found and consumed to increase his Rage meter for use when transformed into the Crinos, collectible documents that provide backstory for various characters and Endron as well as spirits to interact with that serve as XP, also gained with story progression, that will award spirit points when leveled up to spend on the very light skill tree.

Penumbra vision can be triggered which turns Cahal’s vision red, highlighting enemies, environmental interactions and collectibles. It is very useful for following a locked door back to a computer terminal which can unlock it and finding the spirit collectibles. 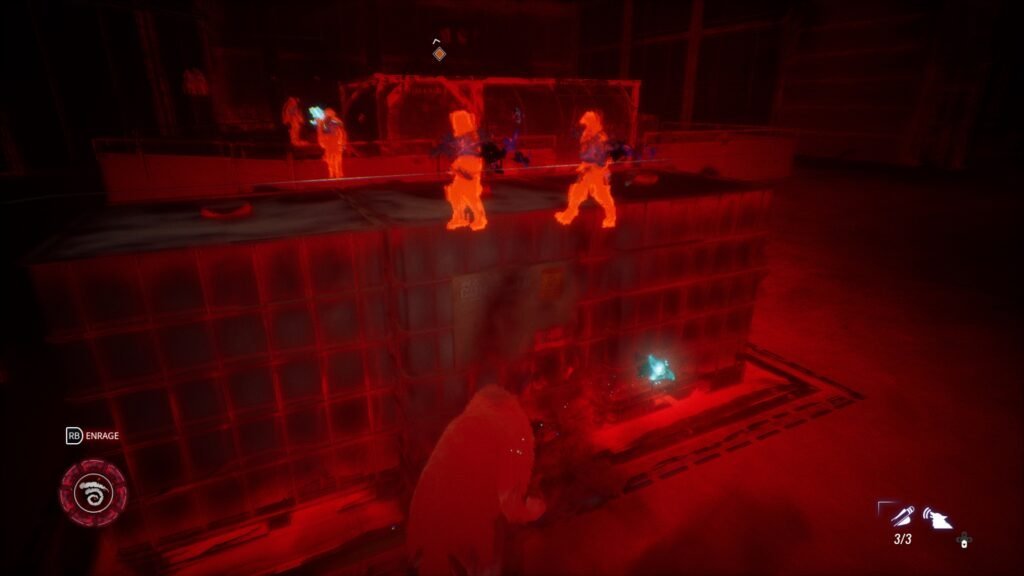 At any moment Cahal is able to transform into his Lupus/wolf form. The Lupus is excellent for sneaking around the plethora of guards and is able to bypass some combat situations entirely with careful planning between both Cahal’s Homid and Lupus forms. The Lupus is extra quiet and fast, less detectable than Cahal’s Homid form due to its smaller size. Playing as the Lupus comprised the bulk of each of my playthroughs due to the increased speed and decreased visibility. Performing stealth takedowns, destroying cameras and reinforcement entries will aid the Lupus’ ability to easily avoid combat and progress. 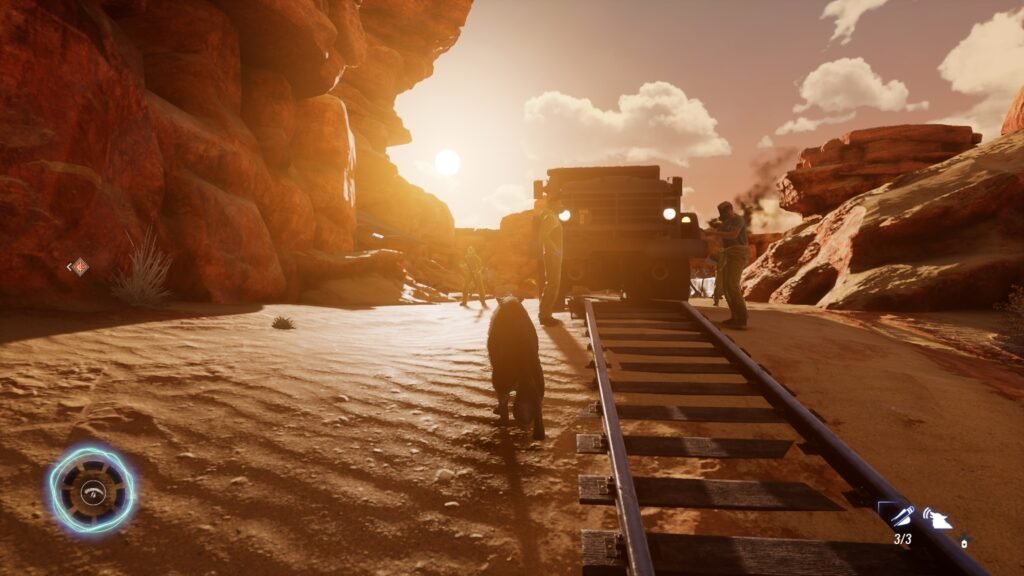 During all combat encounters, Cahal transforms into the Crinos/werewolf form as this is the only form capable of combat. This towering monster has two stances, Agile and Heavy. Agile is faster but deals less damage whereas the Heavy stance is a lot slower but deals greater damage. 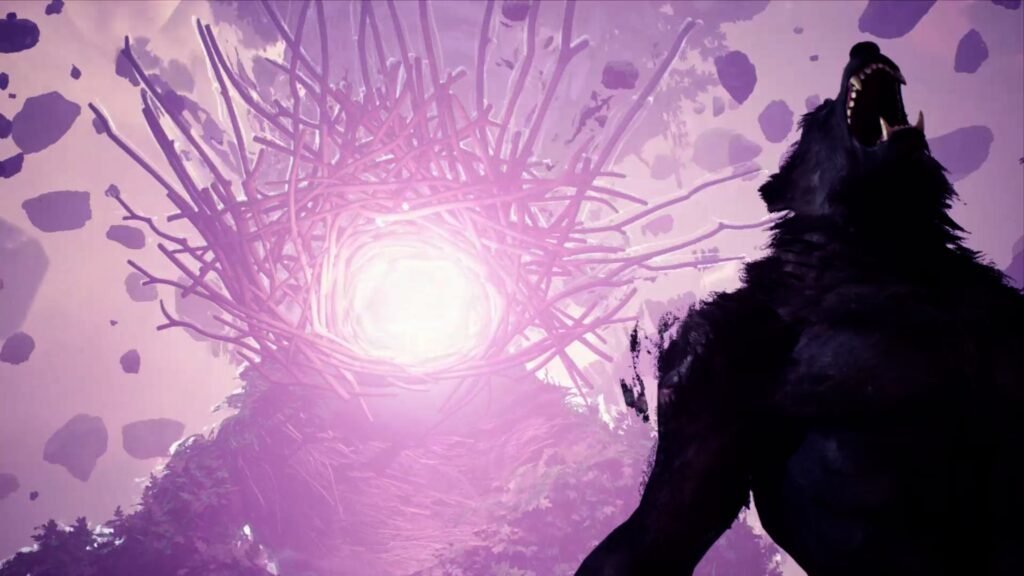 With light and heavy attacks to mix into combos to devastate the waves of enemies, Cahal also has access to up to 3 unique abilities for each stance and each has a health regeneration ability as well. These abilities can be used at the cost of Rage. Throughout combat Cahal’s Rage meter will increase, slowly filling a number of bars – each ability costs one bar of Rage with the exception of one of the Crinos’ abilities. As Rage builds fairly quickly in combat, these can be used fairly regularly and make short work of the various enemy types. 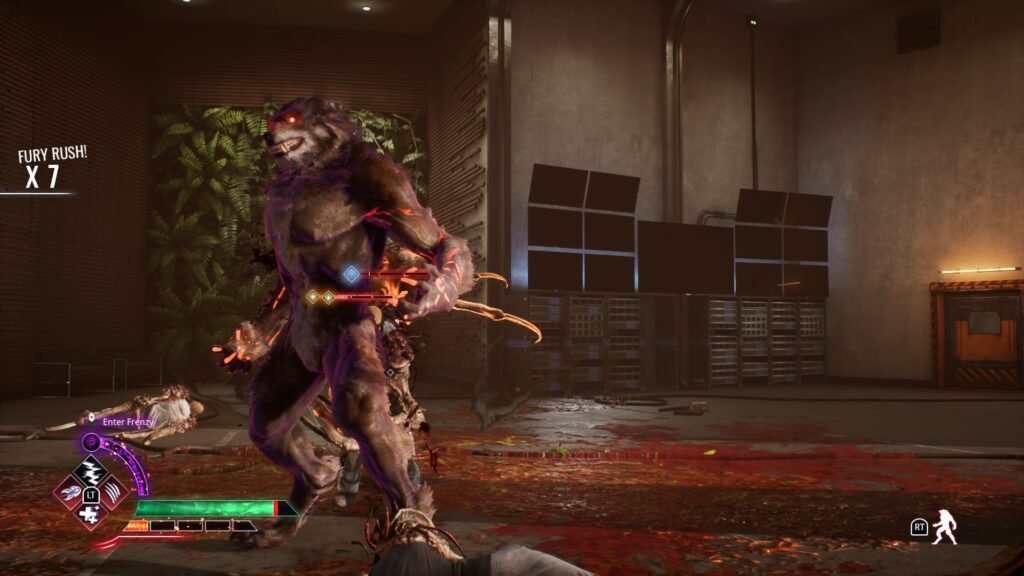 On top of Rage, throughout combat Cahal will also earn Fury which will fill a meter which can then be used to trigger Frenzy. Frenzy unleashes Cahal’s most primal and visceral rage, sending him into a chaotic state that deals devastating damage for the duration of the Frenzy meter as it gradually depletes. Upgrades can be acquired to increase the rate Fury and Rage are accumulated as well as increasing its duration by hitting enemies.

A decent variety of enemy types keep the player alert. There are security guards with pistols, shotguns and rifles as well as guards equipped with shields and shocking weapons. Larger brute like enemies are less easily stunned by Cahal and pack a punch themselves. Giant exo mechs prove a worthy adversary too, able to sustain and inflict significant damage. Some enemies are equipped with silver bullets which will decrease Cahal’s maximum health until the combat encounter is complete. This can be frustrating early on and can only be avoided by dodging out of the way. A variety of new enemies are introduced later in the game to mix things up even further.

There are a number of boss battles which offer some interesting alternative and typically larger enemies, including some much needed werewolf vs. werewolf action. These battles are more often than not Cahal vs. a boss as well as smaller enemies as opposed to straight one on one encounters. These are enjoyable alternatives to the standard wave based combat encounters and are paced appropriately throughout the story. 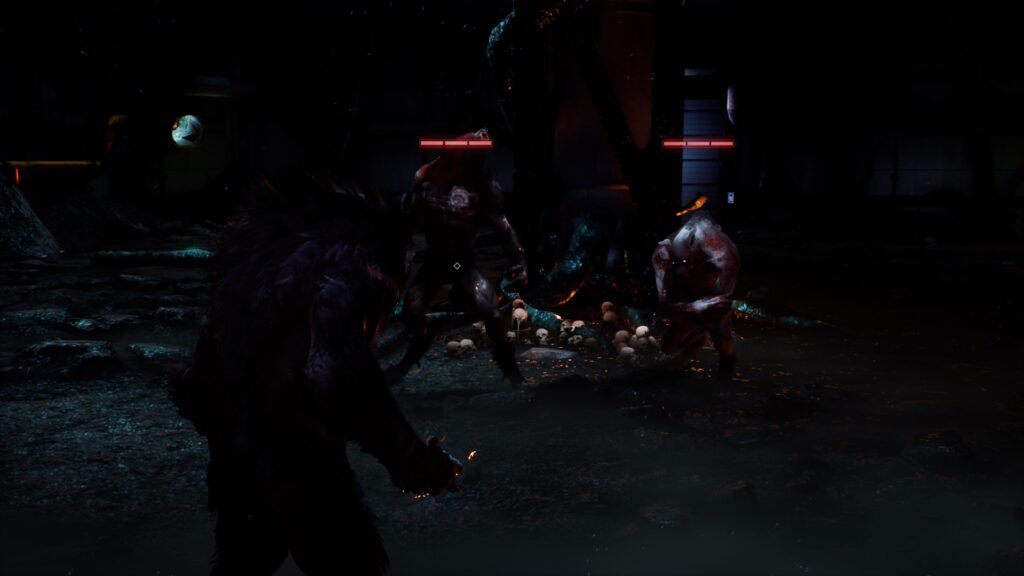 The combat in Werewolf: The Apocalypse – Earthblood is very hack and slash in nature. With a fun assortment of abilities to use and the pair of stances that offer alternative paced fighting styles, there is a lack of depth to it that limits its potential. It manages to remain satisfying though by careful upgrading of the skill tree, all core abilities can be unlocked very early on, with no further evolution to the combat mechanics. This may lend to a feeling of repetition in the dozens of combat encounters for some players. I personally found it enjoyable enough to avoid this feeling though I do believe the combat could have been deeper and more engaging to really feel more violent and exciting. The arcade-like feel to the overall gameplay has its charm however and manages to stay fun. 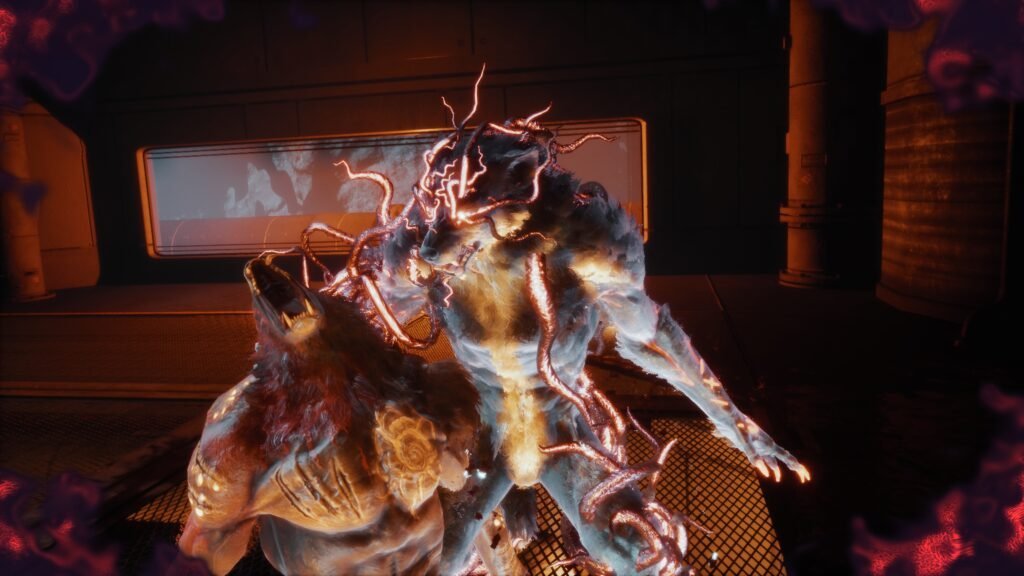 Each combat scenario is accompanied by heavy metal tracks composed by H-Pi in the background that comfortably fits the savage and blood splattering violence demonstrated on screen. This is a very smart move by Cyanide Studios that perfectly fits the overall theme of the game. A pair of epic and powerful contributions made by New Zealand heavy metal band Alien Weaponry in their native Maori tongue for the opening and closing moments of the game provide a raw and tribal feel that is incredibly authentic to the overall experience. The voice acting is very underwhelming, as with the visuals, Cahal stands out from the pack but almost by default. 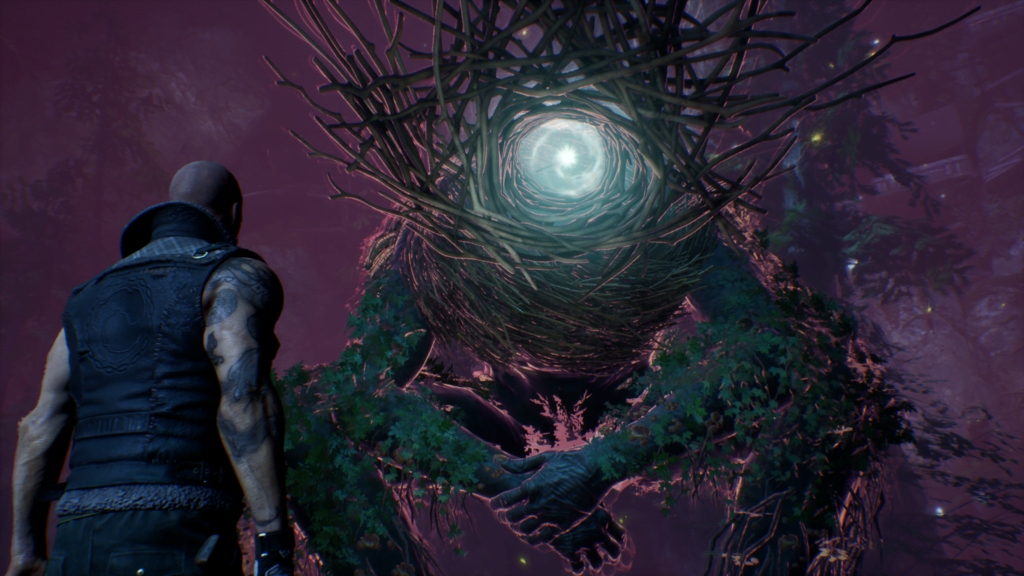 As far as side quests go, there are two mission chains to pursue. Three are offered in the Washington State Forest hub in between the first few missions and another three are offered in the Nevada Desert hub between later missions. Aside from these, only a handful of optional objectives are present throughout the story. Once completing the game, only the final mission can be replayed – which is useful for taking the alternate path to the 2 endings available. With no chapter select or New Game + to choose from, a new game must be started from scratch that offers nothing new to justify a replay. 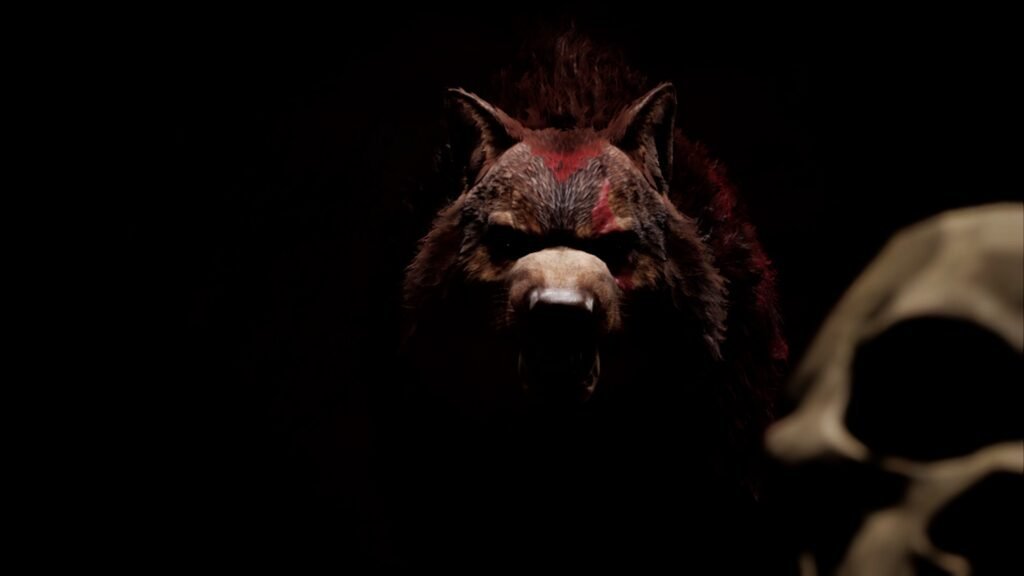 The environment is impressive and the use of lighting effectively brings the world to life. With the exception of Cahal’s trio of forms the character models throughout aren’t as admirable and some clunky animations and familiar level design hold it back. Luckily all aspects of Cahal and each of his alternate forms look and feel great and fluid, whether it’s traversal or combat. 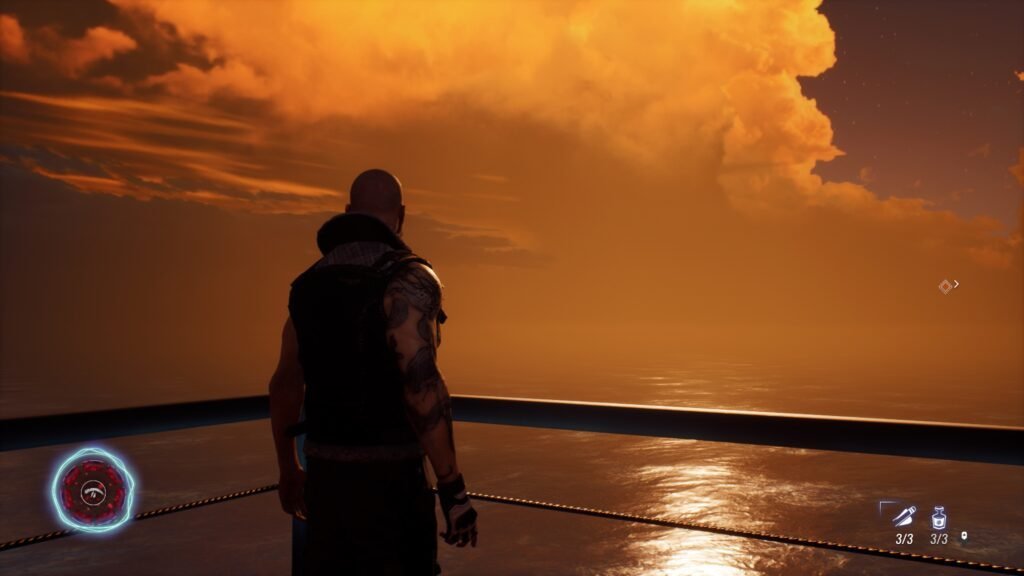 Rooted in the lore of the World of Darkness mythology that is also home to the likes of the Vampire – The Masquerade series of games, Werewolf: The Apocalypse – Earthblood offers a decent yet mixed entry. The stealth aspect works well though kind of at odds with the brutal hack and slash combat. Despite both being satisfying though lacking in depth, neither aspect is particularly fleshed out in ways that could take it to the next level. There’s potential for further adventures in this world that are exciting and this title is more than competent in regards to opening the floodgates for more violent werewolf tales.

– Lacking depth in combat and stealth 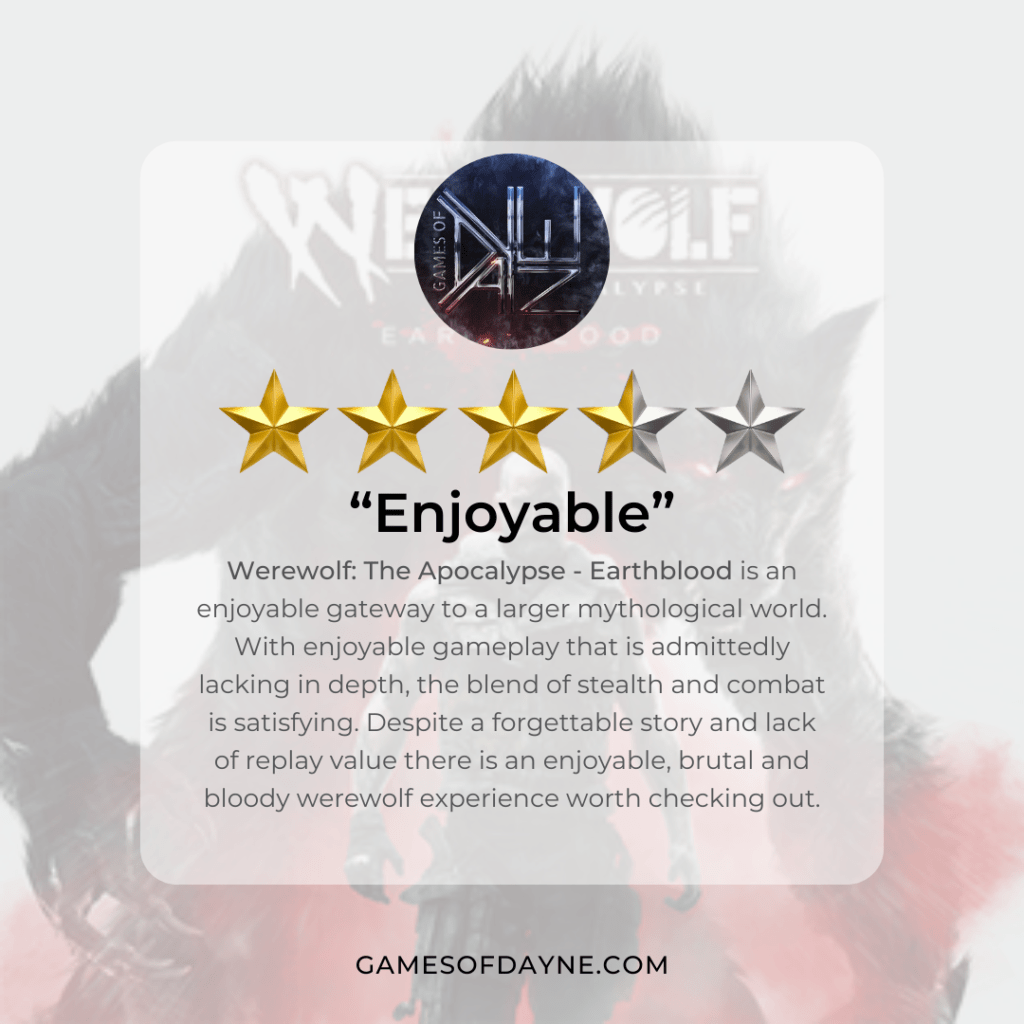