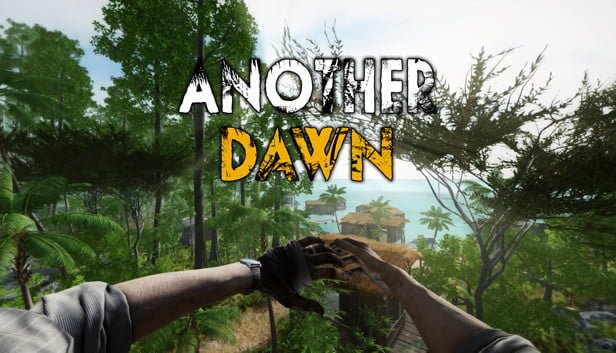 A luxurious beach resort provides the backdrop to the abduction of Another Dawn’s unnamed protagonist’s wife. Battling hunger, thirst and the enemy soldiers that have occupied the holiday hotspot and it’s surrounding areas, the player must survive, push through and find their loved one before it’s too late.

Utilising awkward and outdated gameplay mechanics, character models and animations, Another Dawn is a title reminiscent of generations gone by and likely inspired by similar titles of the early 2000’s. Throughout the hour long adventure of enemies to avoid or eliminate and simple puzzles to solve, what little story that exists beyond the premise fails to captivate or motivate, leaving its cliffhanger ending to miss the mark. 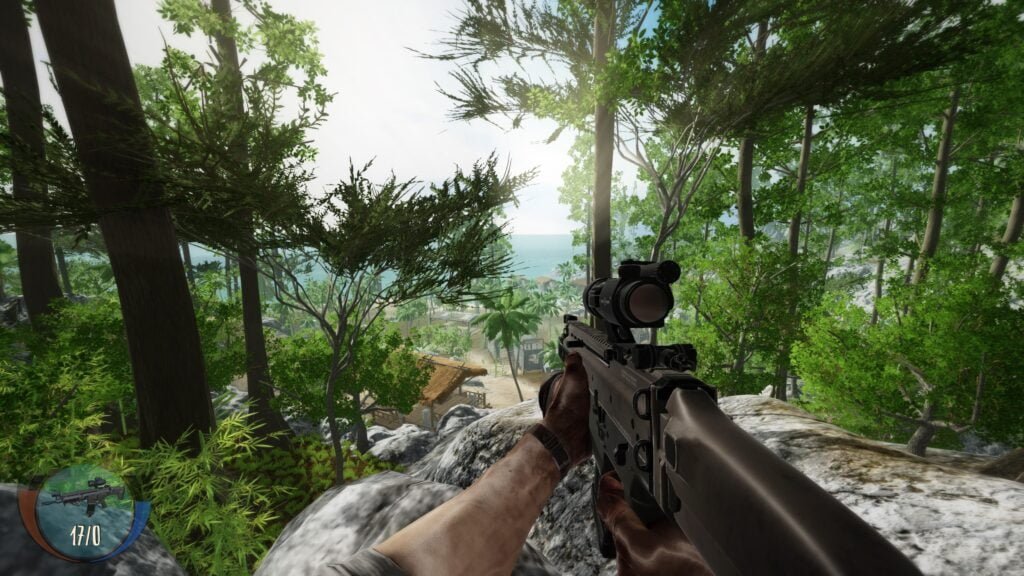 The story sees the player venture to various parts of this remote island, seemingly controlled by an unknown militia for sinister scientific purposes, to discover caverns, a lake, an ill-intentioned laboratory and a heliport. Each of these areas lack meaningful content with the likes of a few shacks and guard towers serving as little more than potential resource locations. Enemy soldiers are sparingly scattered throughout the map, patrolling predetermined paths with hawk-like vision that will be altered to the players presence at great distances, whether hiding in tall grass or behind cover or not. Once detected the enemies don’t relent, pursuing the player whether line of sight has been broken or not. 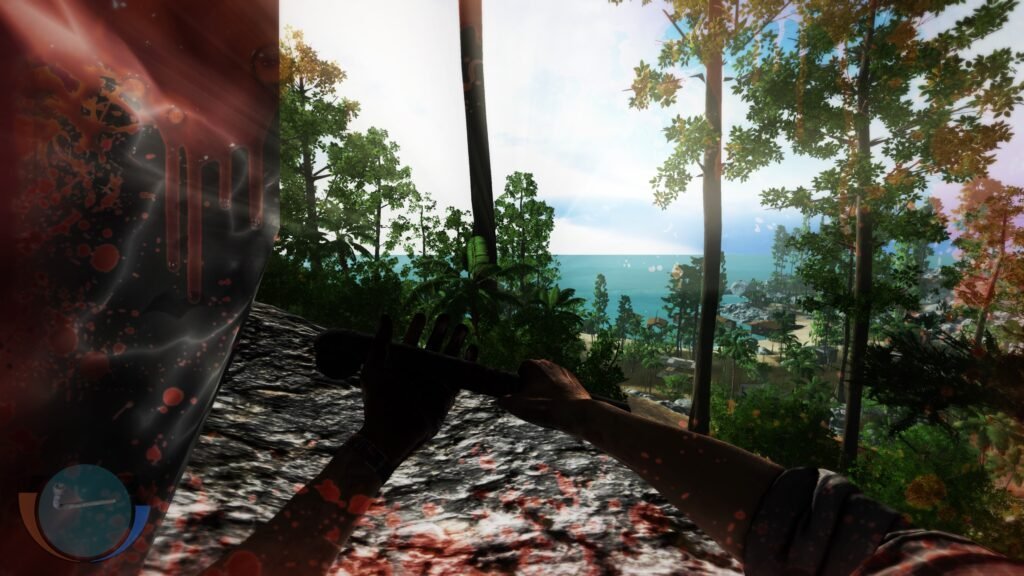 Enemies can be engaged in combat with an assortment of guns or alternatively stealth killed if they can be crept up to from behind without detection. The gunplay in Another Dawn has the aim down sights awkwardly allocated to the left shoulder button. Engaging enemies directly will most likely result in the player taking damage, evident only by a blood stained screen slowly fading in with no real indication of how many shots you can take. The player is able to heal by using healing plants or medkits found sparingly in the environment.

Hunger and thirst meters contribute to the survival element of Another Dawn, depleting gradually with time but can be replicated by consuming food and water respectively. Failure to maintain these, or succumbing to gunfire damage, will result in death, returning the player to the beginning of the level. Luckily the levels are less than 10 minutes long but it can be frustrating being caught out somehow right at the end and having to replay the mission, made tedious only due to the cumbersome nature of the combat situations. 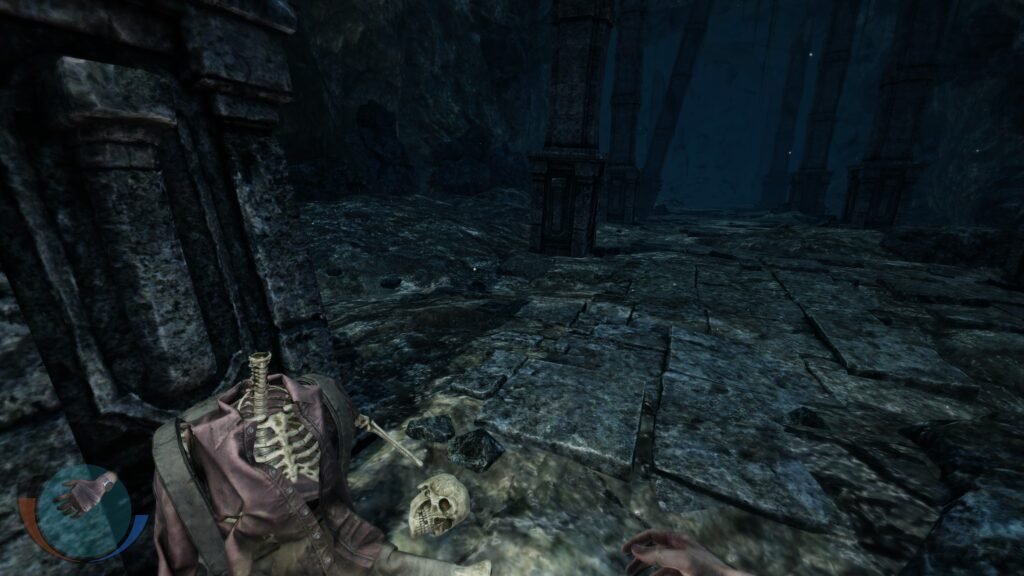 The player has a stamina bar that is drained by sprinting and jumping, recharging when walking or staying idle. Sprinting will make noise near enemies however, in which case the player is able to crouch to increase their chances at avoiding detection. Crouching behind objects or in tall grass usually reduces or eliminates line of sight though in my experience it is not guaranteed to do so. 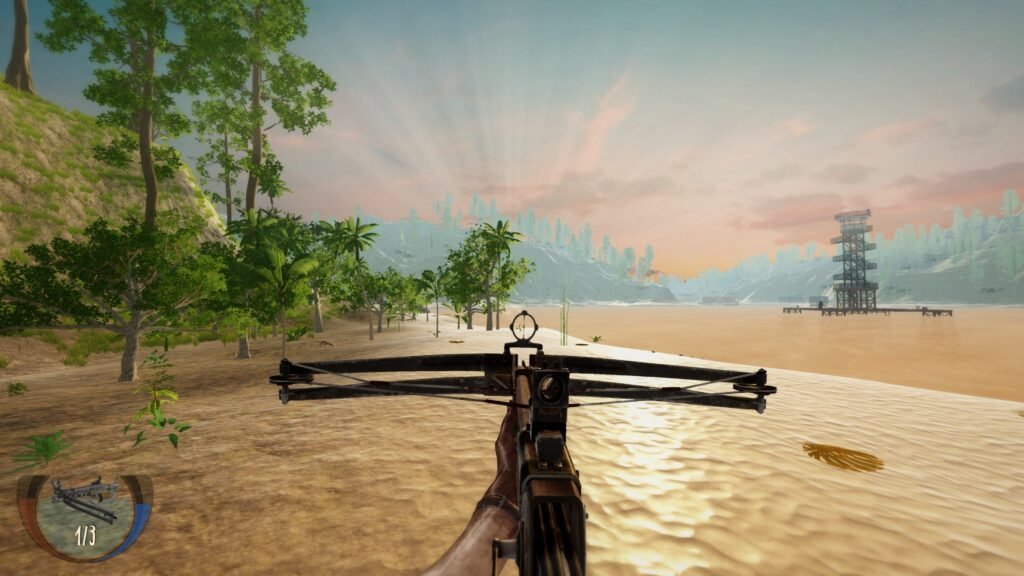 The puzzles are relatively straightforward, tasking the player with simply finding a key card to access a door for instance and the required items are typically within close proximity to the puzzle that needs solving. These are a nice inclusion that mix up the otherwise walking-sim style gameplay but a little variation in their complexity wouldn’t have gone astray. 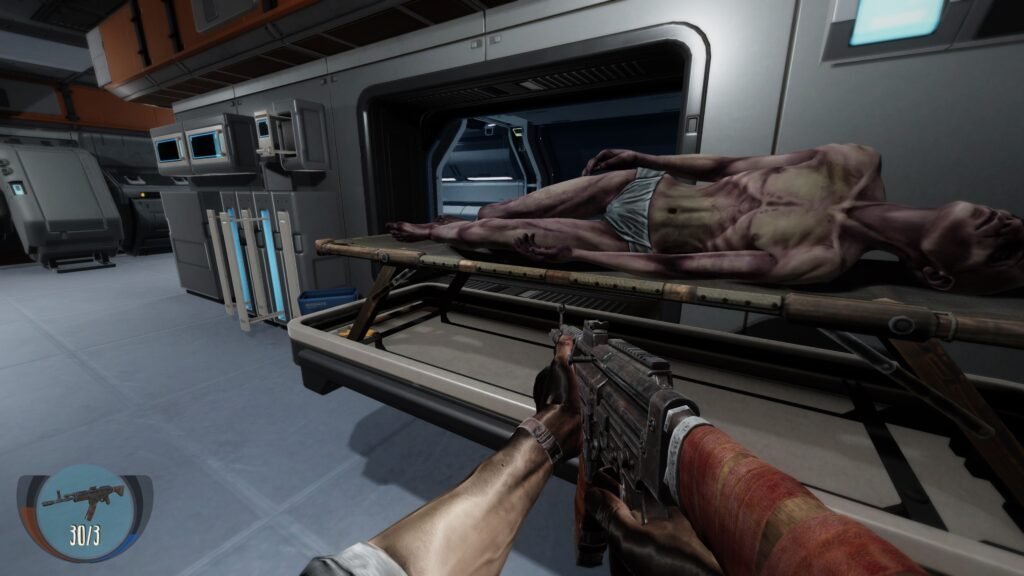 Each individual location is distinctly different to those that came before or follow. The beach and lake are patrolled by guards, the caverns have swimming sequences, the laboratory levels introduce a new enemy type and the final heliport mission is essentially a get from to A to B while using stealth executions or running through guns blazing. 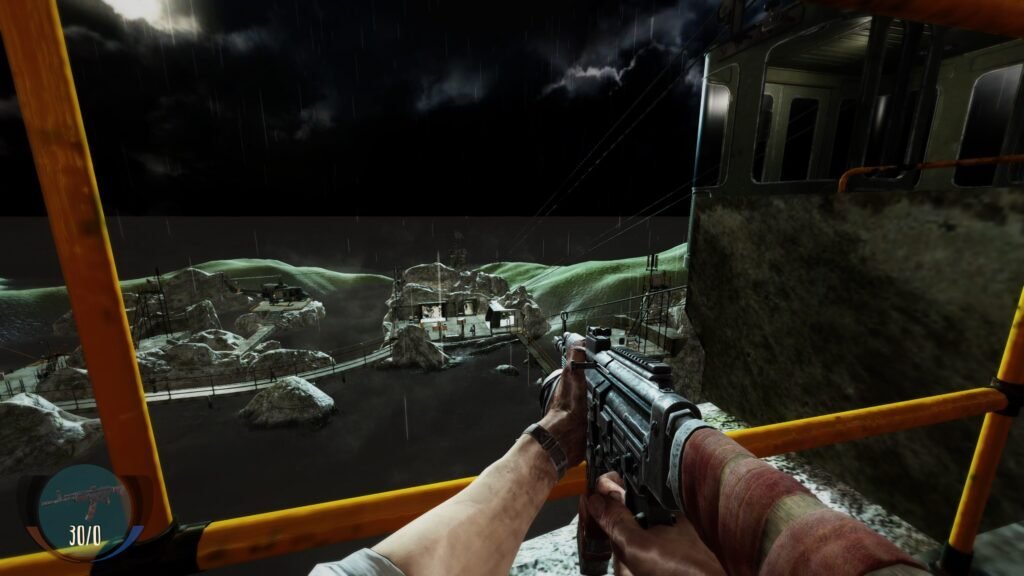 Visually Another Dawn feels dated, from its bland environmental design, odd player animations – particularly when your hands randomly appear in front similar to a zombie and awkward walking and strafing animations from the enemies that look as though they are half-crouched or trying to sit on something as they move. 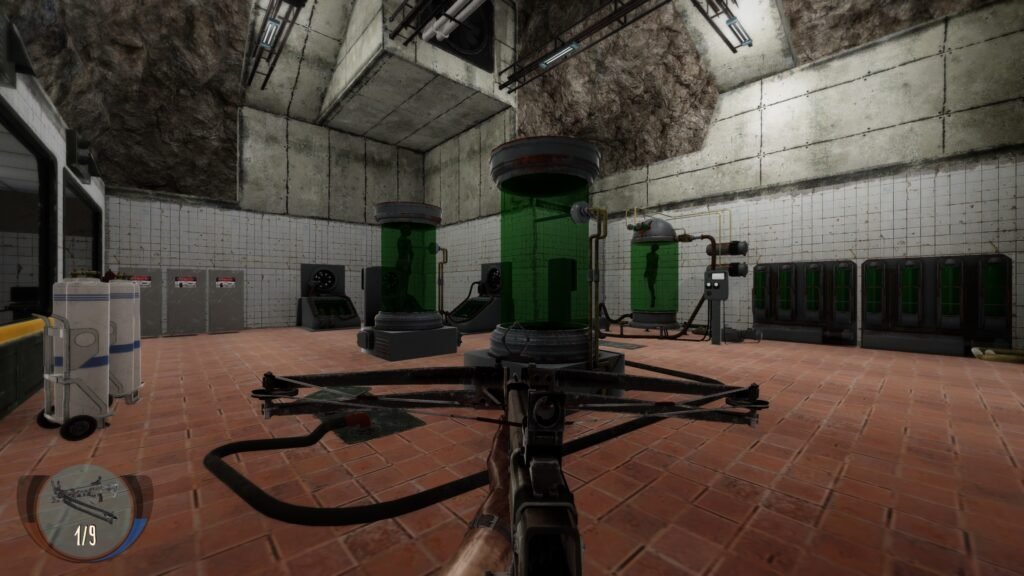 Another Dawn looks, feels and plays like a game that should have released nearly 20 years ago and there’s a charm to that. Dated mechanics and execution by today’s standards would have made for a less different experience over a decade ago. There’s something to be said for an experience that feels like a throwback to previous generations of console games, it’s possible Another Dawn has been made to feel like that, in which case it’s admirable.

+ What little story is told is intriguing 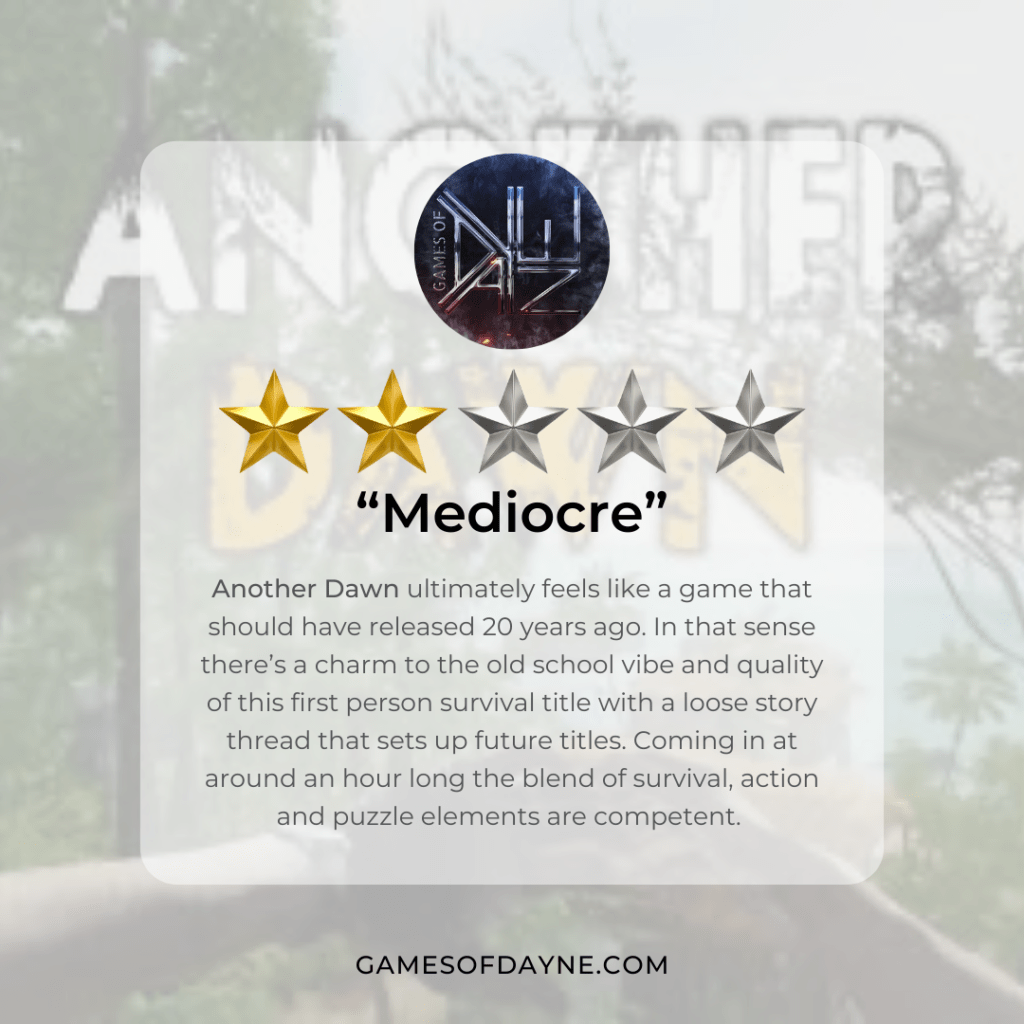