Originally releasing on Steam and Nintendo Switch in 2019 The Childs Sight has now launched on Xbox. Played from two perspectives of the same character, the player briefly explorers a location before triggering a memory where the core gameplay kicks in. A combination of survival horror and what could be considered puzzle solving via audio cues, the player assumes the role of a baby in their crib trying to go to sleep while escaping the horrors that lurk within their bedroom. Creepy and effective sound design torment the player while serving as clues for how to escape the clutches of evil.

Narratively speaking, The Childs Sight opens each of its seven nights with the player exploring the attic, interacting with notes and old toys from their infancy which slowly unravel their mysterious and troubled memories. Getting within close proximity of a specific object within the area triggers the “Remember a Moment” prompt which, when interacted with, sends the player to relive one of the baby’s memories. 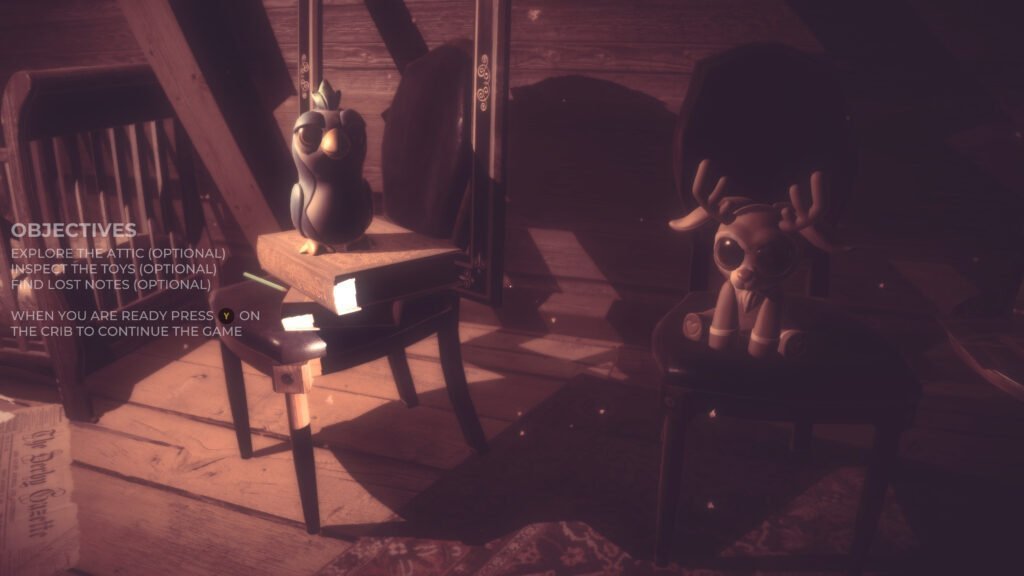 The Childs Sight is a well executed case of less is more. The minimalistic gameplay is simple and accessible enough while the constant thunderclaps distract the player from the assortment of audio cues that signal the imminent arrival of evil. The object of each of the seven nights is simply to fall asleep inside the crib. This is done by holding B until a blue line in the bottom left of the screen forms the outline of a square. What complicates the simple task of falling asleep are the number of ways the evil intruder will try to attack the baby. Fending off this threat requires the baby to perform an action that is directly associated with an audio cue. 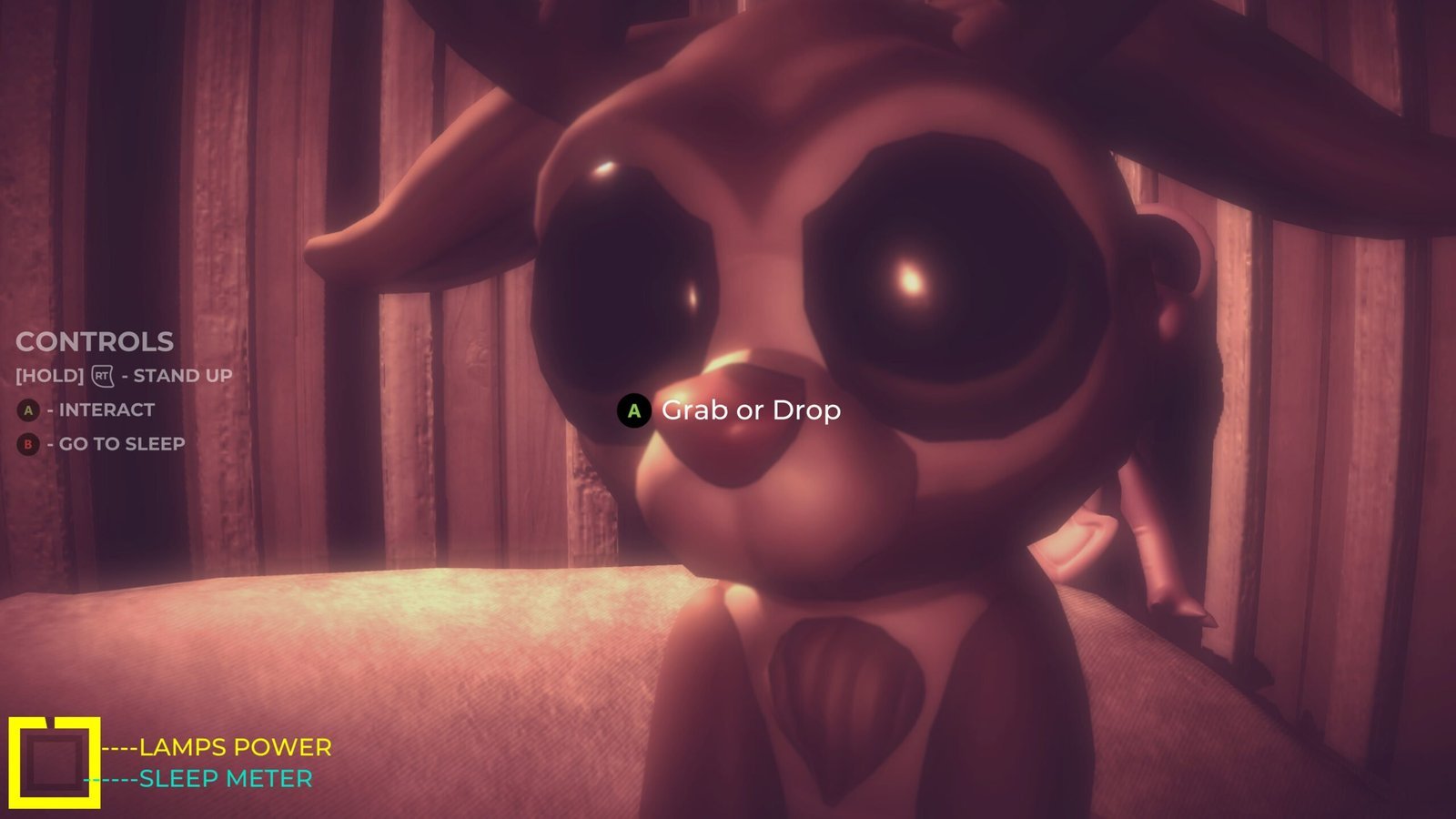 A carousel at the bottom left of the crib plays music that will eventually stop. The player must reactivate this as soon as possible as the longer it is off, the faster the intruder will approach the baby. There are 4 audio cues that signal the entities imminent arrival, which result in the night having to be restarted after a jumpscare. Each of these audio cues have a specific interaction required to keep the evil at bay as follows:

These audio cues are simple enough to identify and easy enough to combat by using the interactions mentioned above. Where The Childs Sight becomes complicated is that in earlier nights, there will only be one or two of these audio cues to worry about but with story progression the others will be slowly introduced, and on the last few nights in particular the frequency and overlapping of audio cues begins to get chaotic. When there is knocking on the door and the closet being opened at the same time the player needs to have the light off to avoid the door knocking but needs it on to prevent the closet entry of the entity. 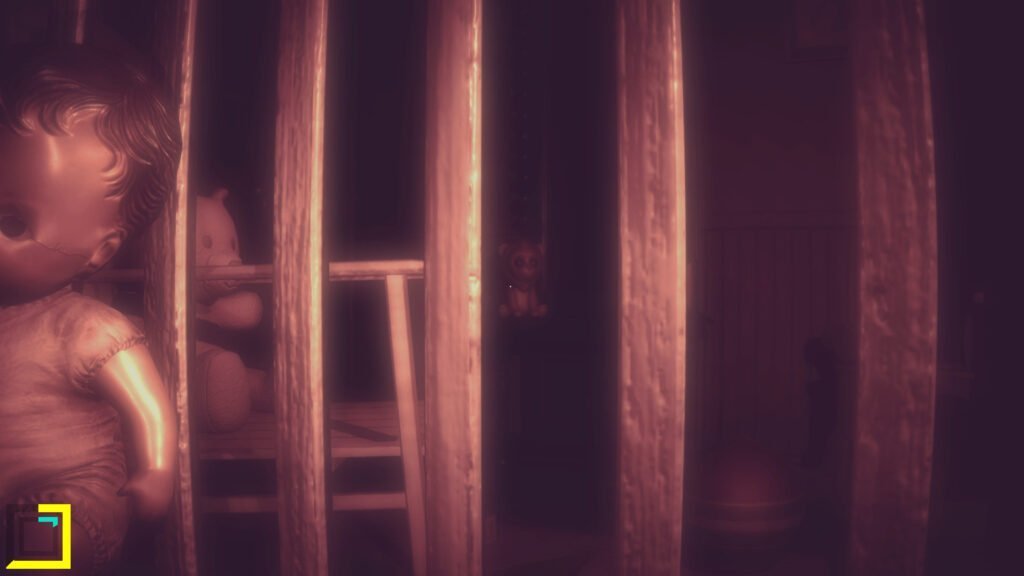 The amount of time seems to be a little random as for how long you have to silence the audio cue but somewhere between 5-10 seconds can be expected. The roaring claps of thunder in the background are perhaps the biggest offender of the players control of the situation as it is very easy for the closet door to open for instance but not be heard due to the thunder. Upon a game over there are helpful survival tips that typically relate to the manner that resulted in the failure to survive the night.

Quick reactions to audio cues, sparing use of the light and holding B to try and sleep as often and for as long as possible are key to surviving the night. Once the sleep meter is full and the baby falls to sleep, the night ends and the next begins.

On top of the seven chapter Story Mode there is also a Time Attack Mode that challenges players to simply survive as long as possible and earn the highest score. Earning 1 point per second, this endless mode has the sleep option disabled allowing the player to focus on nothing other than managing the audio cues to survive. Adding pressure is the increased AI speed which is doubled, keeping the player very busy at all times.

The art design is effective with its emphasis strongly towards the darkness and minimal lighting. There is a playful charm to the confines of the crib and the toys that decorate it. Playing The Childs Sight with headphones and high volume is highly recommended to not only make the audio cues easier to detect but to also increase the tension and impact of the sounds and the thunder in particular. The playful giggle of the baby when standing up in the crib or grabbing the reindeer is cute but it also doubles as creepy given the tone of the game. 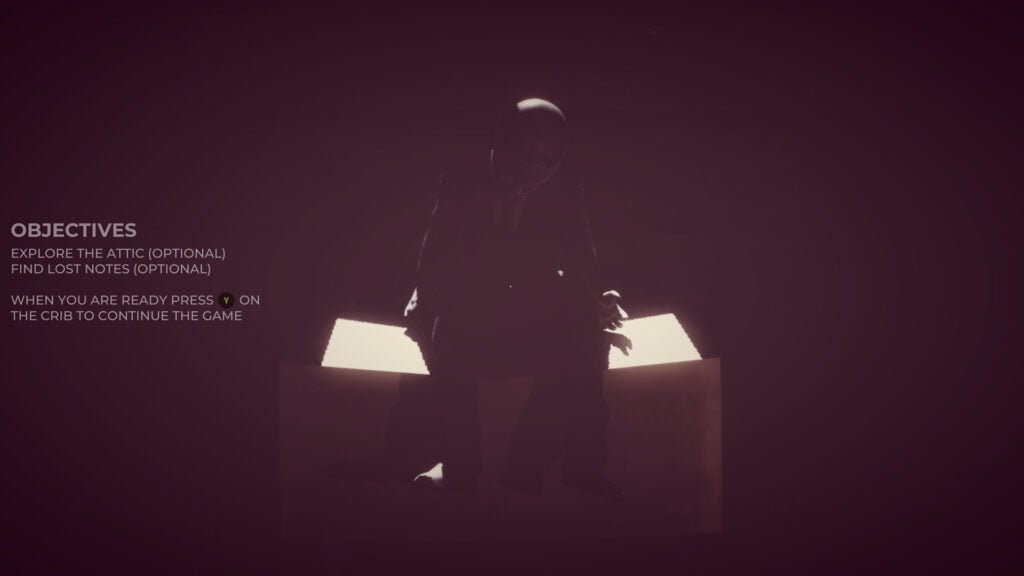 The Childs Sight is an effectively simple title that isn’t particularly difficult if careful attention is paid to every sound and quick reaction times of their associated interaction to silence the evil for a moment. Playing this alone or sharing turns with a friend or family is particularly fun when witnessing people’s reactions to their failure. With the Story Mode coming in at little over an hour it would have been nice to see a little bit more as well as some additional threats to manage but The Childs Sight is an interesting and enjoyable bite sized terror treat that is entertaining nonetheless. 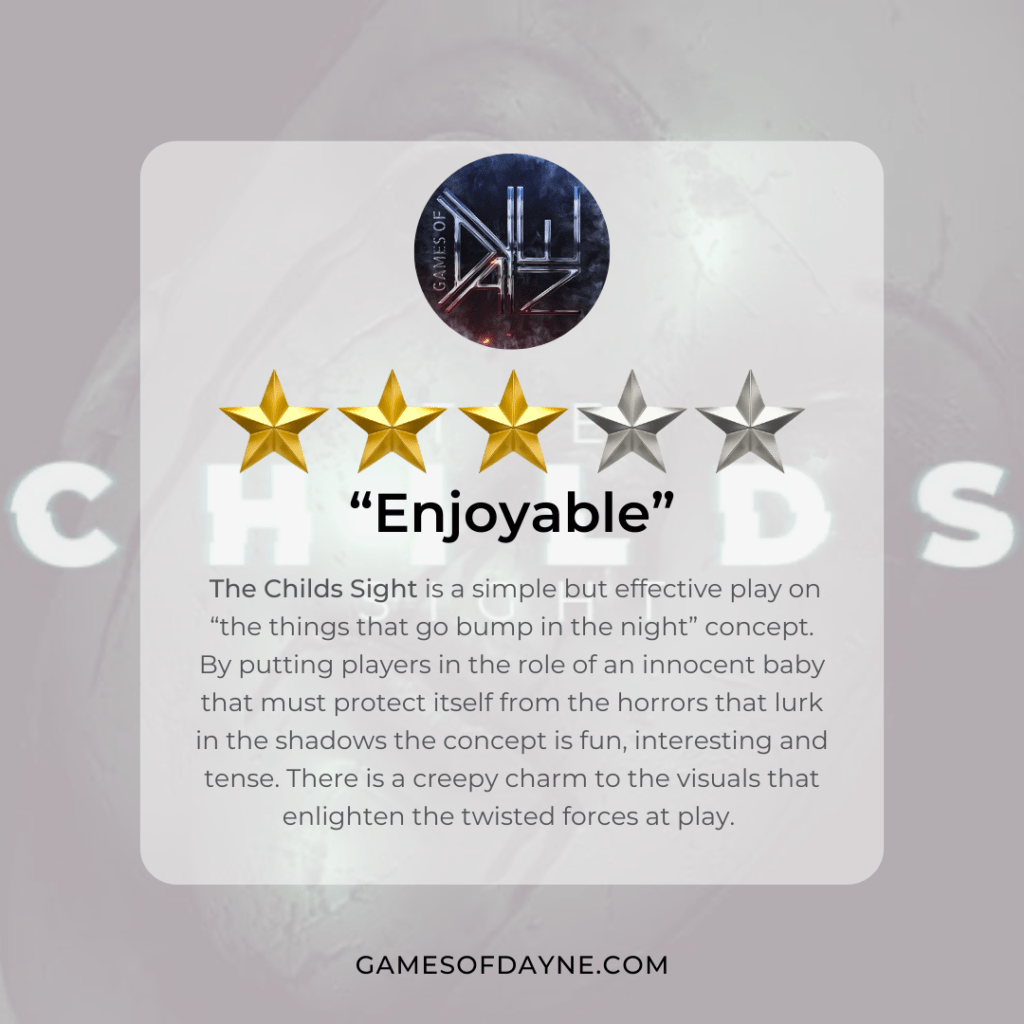