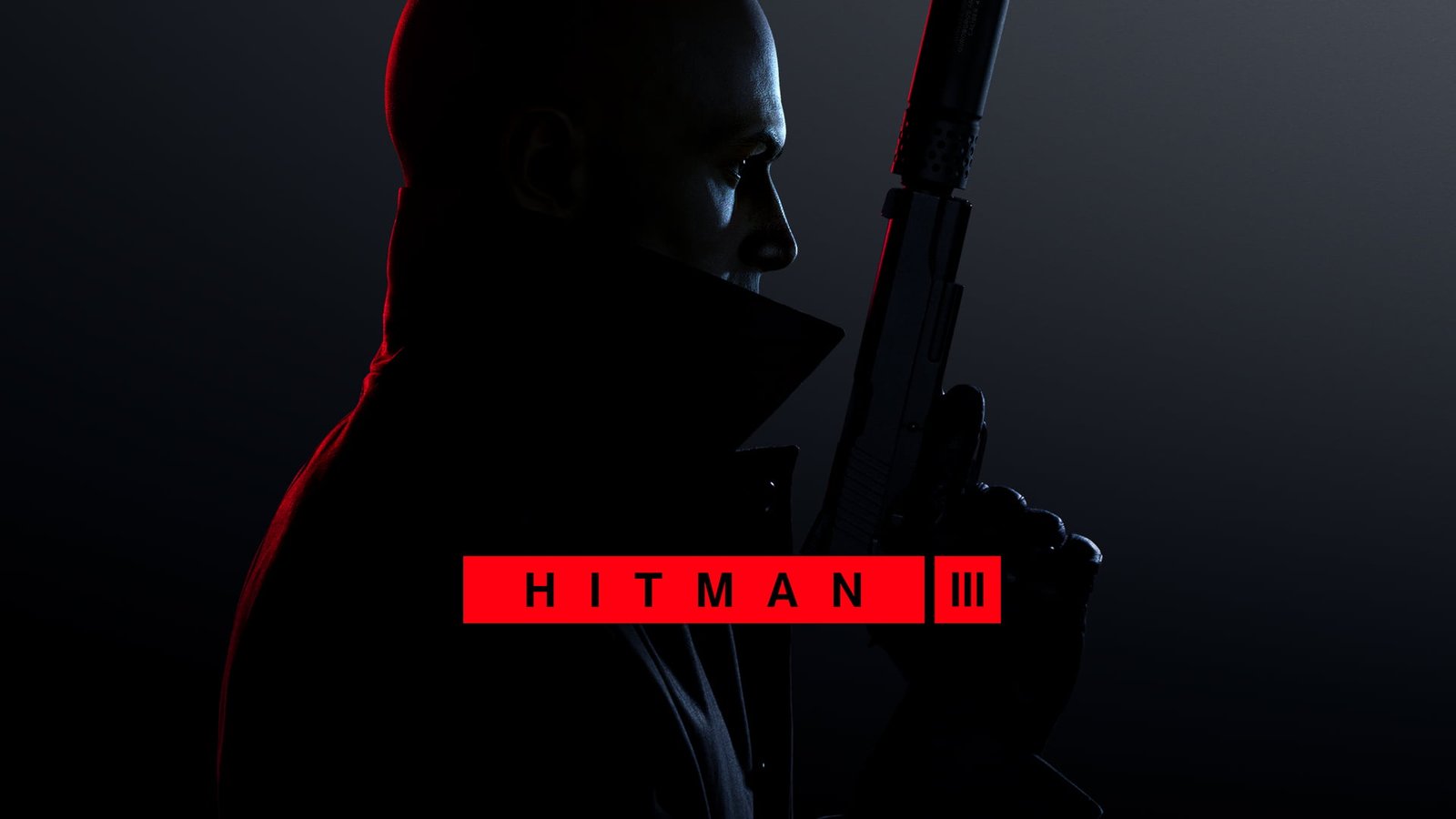 The World of Assassination trilogy that IO Interactive started back in 2016 comes to an end with Hitman III in a visually stunning final game. While the gameplay itself feels extremely familiar, experimenting with the multitude of assassinations as Agent 47 remains satisfying and countless challenges encourage replayability to become the ultimate assassin.

The narrative arc of the fan favourite bald and barcoded assassin takes a backseat for the third time in the trilogy, instead opting for the open-ended exploration and execution of Agent 47’s targets in a wild number of manners that are violent, creative and on the border of comedic at times. The story itself is told through brief cinematics at the beginning and end of each of the six main missions. While these cutscenes serve their purpose they do little to offer a more meaningful service than simply kill X because of Y. 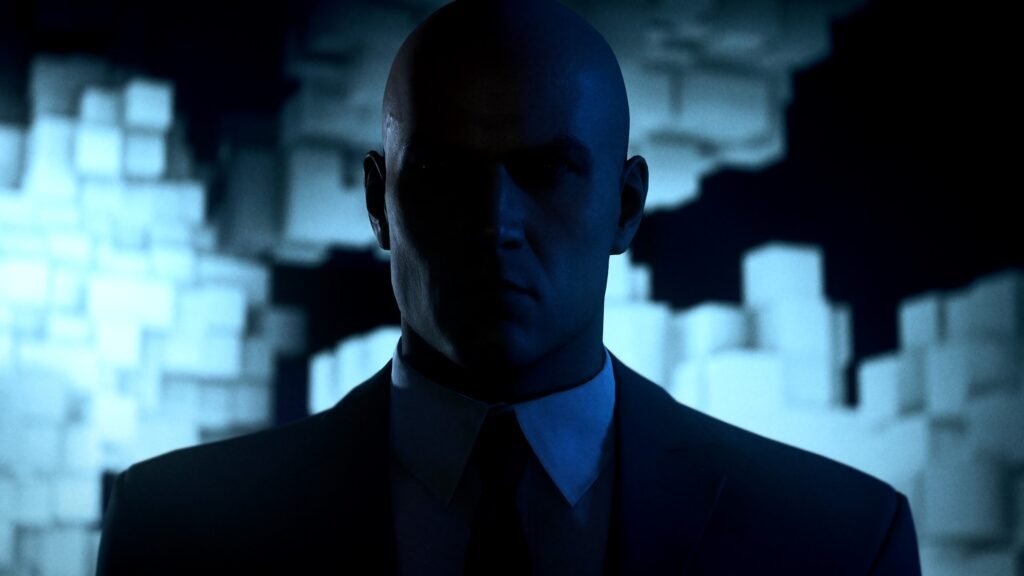 Mission structure is surprisingly fun in Hitman III putting Agent 47 in the role of a detective for one mission, investigating clues, confirming alibis and interrogating five family members that may be responsible for the death of their relative in the house they all happen to be staying in for reasons that are just as intriguing. Another mission has the player tracking down an associate by venturing into a seedy underground nightclub with a biker gang operating out of the basement and another that explores a vineyard and the introduction of Agent 47, tour guide. The premise of each mission is interesting, fun and unique, forgiving the rather safe overarching narrative this threequel ultimately delivers. 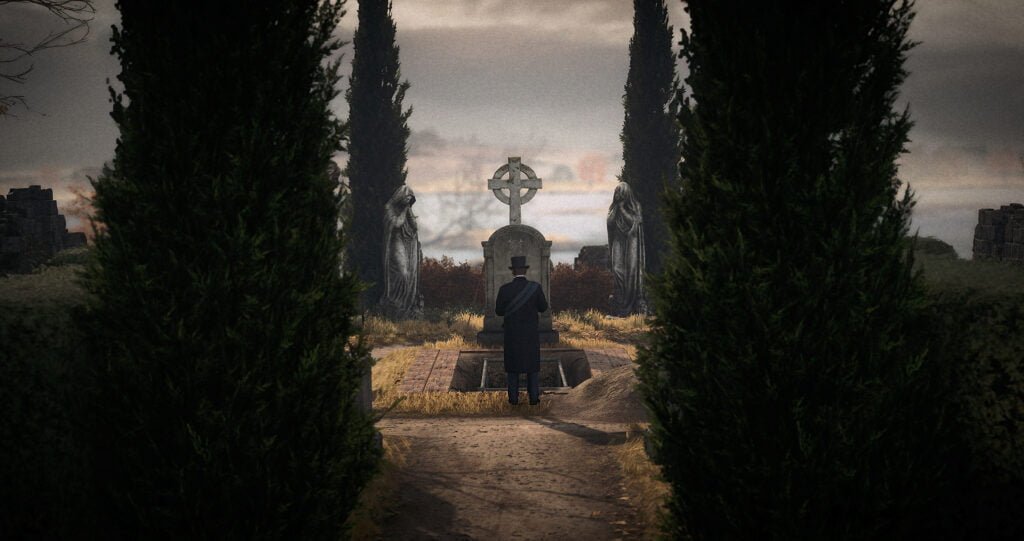 The ending itself is fairly predictable though overall the story does manage to come together in a fashion that makes sense not just for Hitman III but as the conclusion for the entire trilogy. What it lacks in emotional impact, engaging or thought provoking storytelling it makes up for in solidifying Agent 47 as a man that knows exactly what and who he is as well as where his loyalties lie. Taking as little as five hours to complete the main campaign, the meat of the Hitman experience is found it’s encouraged replayability and assassination mastery challenges.

For players who have played through Hitman and Hitman 2 the gameplay is essentially the same. Dozens of objects are littered throughout the massive explorable environments such as hammers, screwdrivers, crowbars, knives, irons and so much more. Pretty much anything that can be interacted with is either a weapon, a tool to open doors or containers or an object that can be thrown to draw the attention of guards or civilians that need removed from the scene of your next crime.

The ultimate goal is to complete the mission undetected. By using distraction items, considering alternate routes to pass through areas of high alert or climbing through windows or vents instead of entering an area through a door for example are just a few scenarios where Agent 47 can avoid detection. Civilians or guards can be subdued from behind either non-lethally or by snapping their necks, their bodies are then able to be dragged and hidden in large boxes, skips, closets or lockers for instance to hide the evidence. If the locale permits they can even be thrown over the rails to never be seen again. Before deciding what to do with a body their uniform or clothing can be equipped to allow 47 to assume the role of a character that may be less suspicious. 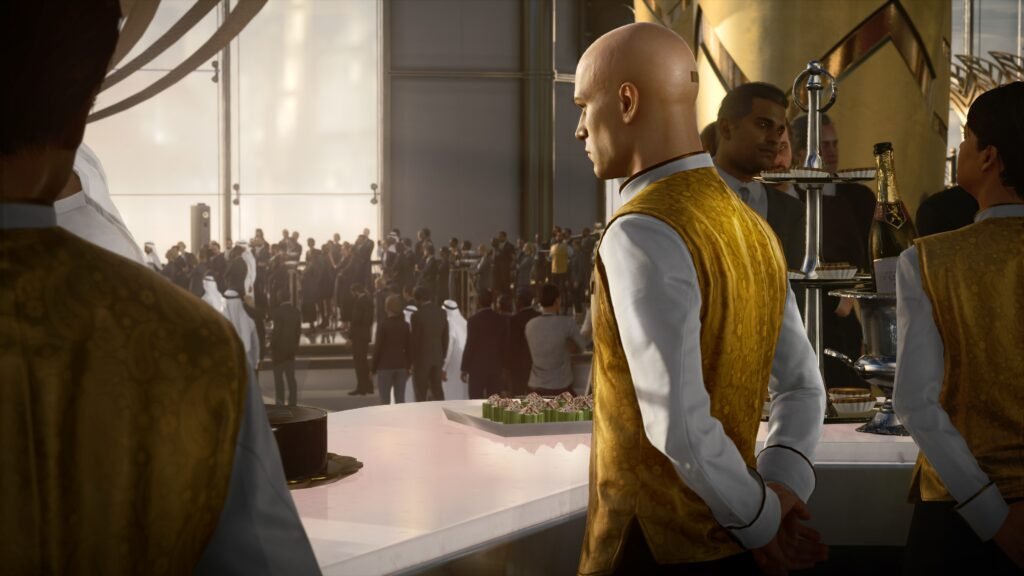 Guns are ideally a measure of last resort though a guns blazing approach can work in most scenarios too. There are a handful of situations throughout the main campaign where being detected will fail the mission however. If the player is witnessed commuting a crime, dependant on the location and number of witnesses, the player will have a brief window of opportunity to quietly eliminate them to avoid their disguise becoming compromised and guards being able to identify Agent 47 on sight. Stealth certainly makes the Hitman III experience easier though it takes great skill to truly become a master assassin that leaves no witnesses or evidence of their work. 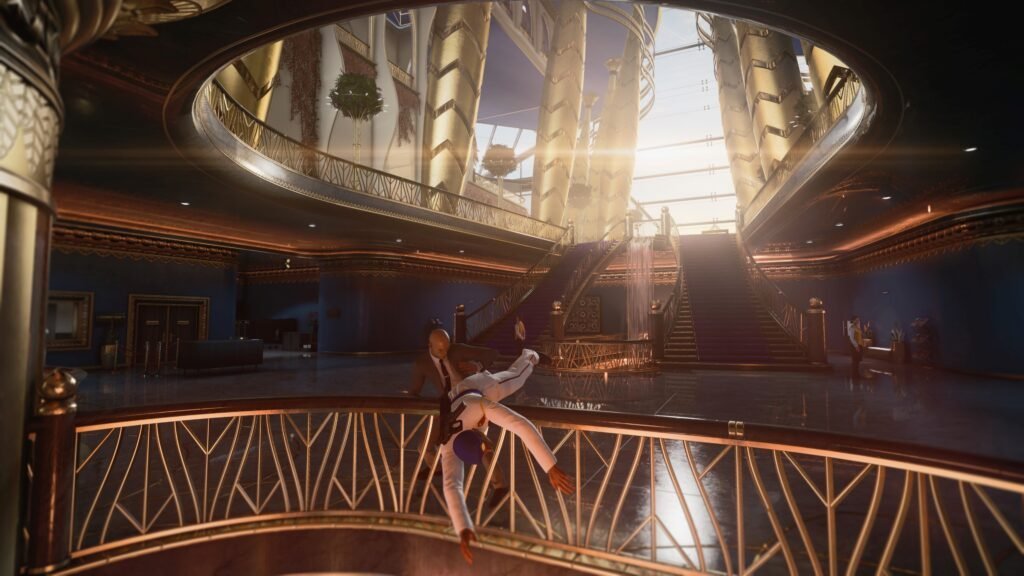 Hitman III features six maps that are comprised of the main assassination objective and a total of 12 mission stories between them – Dubai, Dartmoor, Berlin, Chonqing, Mendoza and Carpathian Mountains. The main campaign asks little more from the player than to simply execute a number of targets and extract. Players looking for more bang for their buck can take advantage of the three additional mission stories found in four of the maps. Two of the maps however are very linear and singular objective based with no mission stories to complete alongside the main objective.

These mission stories offer additional objectives that task the player with further exploration of utilisation of the games many mechanics and contribute to the overall completion of the map as far as challenges and mastery levels are concerned. While they may be optional, franchise players are certainly going to want to see these through to master their skills of hiding in plain sight and executing their targets in the most creative ways possible.

There are a staggering 362 total challenges, averaging around 60 per map that task the players with completing activities across five categories: Assassination, Discovery, Feats, Targets and The Classics.

Completing any of these challenges, all of which can be viewed from the mission select screen, award the player XP which increases their Mastery Level within each map, which is capped at 20.

Reaching specific Mastery Levels allows the player to select alternate starting locations within the map and to choose a location for a smuggled item to be accessed, adding variety to the replayability as players look to hone their skills. 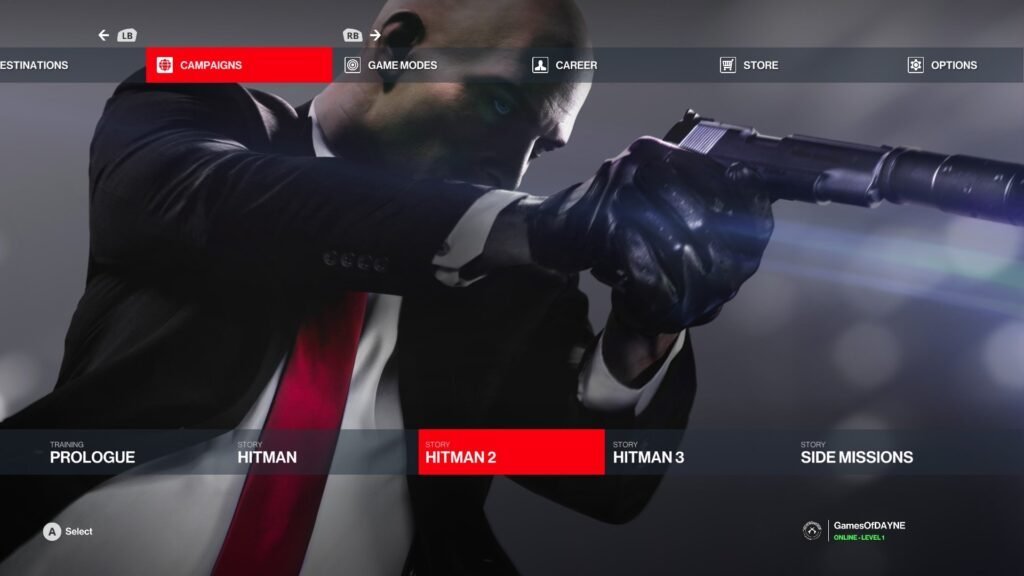 Players who own Hitman and Hitman 2 are able to import their progress and unlocks into the game and replay every mission from the associated games as well, complete with challenges and Mastery Levels. Players who own the entire trilogy are able to seamlessly transfer their progress and access the definitive Hitman trilogy from this one hub. For the Achievement/Trophy hunting community there are separate achievements relating to Hitman and Hitman 2 in this title, several of which will unlock immediately if their conditions have already been met and unlocked in their standalone releases.

Experiencing not just Hitman III’s campaign, as well as that of Hitman and Hitman 2, players are able to jump into another component called Side Missions that offers three separate 3-4 mission mini-campaigns. The sheer amount of content as far as all of these campaigns are concerned is almost overwhelming but IO Interactive can not be faulted for providing one of the most comprehensive offerings to date in regards to a single player title. 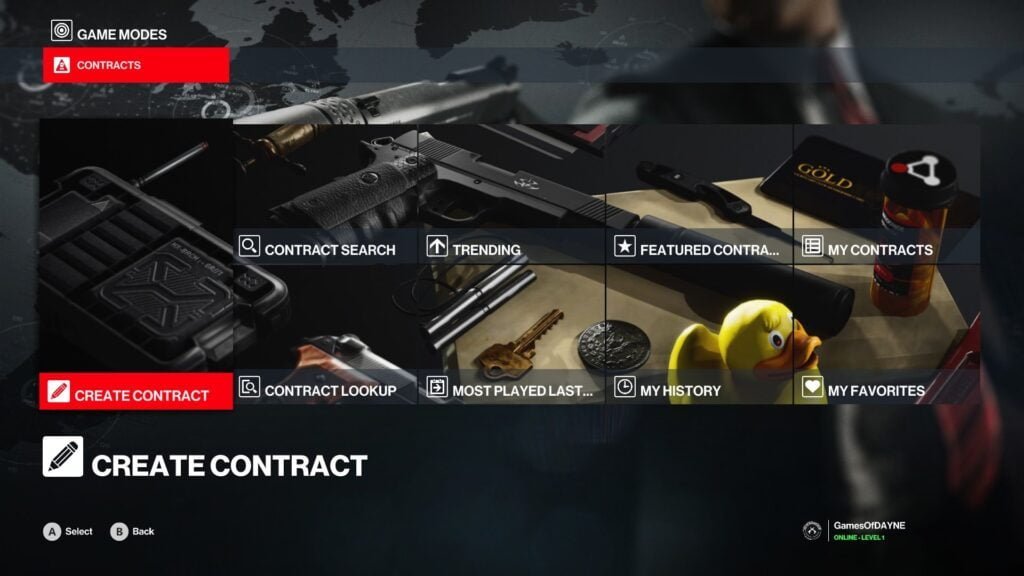 There are two additional game modes in the form of Contracts and Sniper Assassin. Contracts allows players to create their own contracts, choosing the locations, number of targets and kill conditions among other criteria. These created contracts can be played by players all over the world.

Sniper Assassin offers three unique maps – Himmelstein, Hantu Port and Siberia, each with 27 challenges to complete that offer score multipliers instead of Mastery Level XP. XP earned in this mode unlocks upgrades for the player’s Sniper Rifle. The objectives of these missions is to take down a number of targets as well as adhering to conditions such as hostages must survive or to eliminate as many guards as possible. 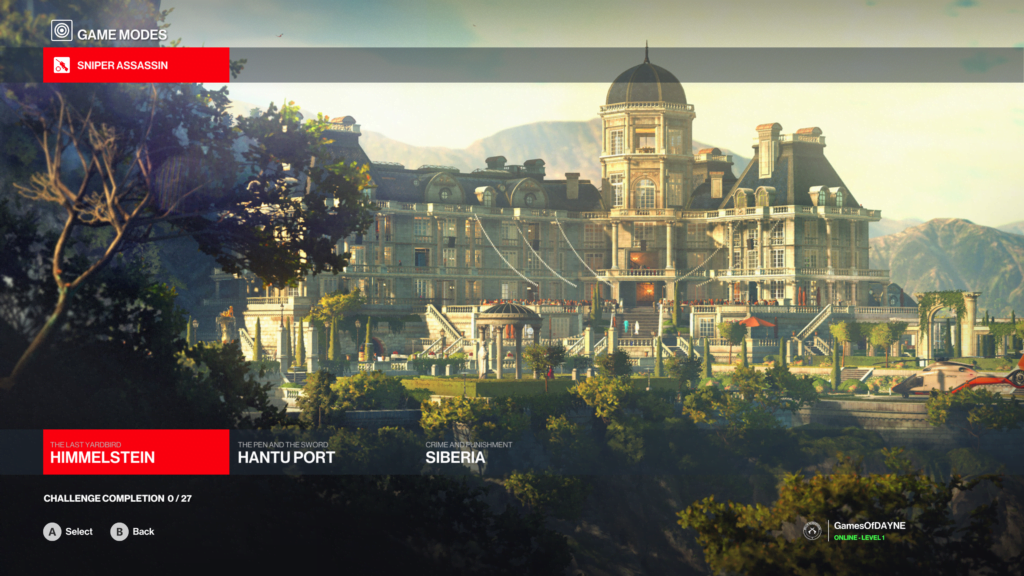 A detailed Career section in the main menu allows players to check out their Mastery Level progression across every map from all three games, Challenge progress and all weapons, gears and suits unlocked.

The attention to detail within the immaculately presented environments is stunning and ultimately contributes to what is easily the most gorgeous citation of maps in the Hitman franchise. Diverse locations such an elegant British manor, a towering skyscraper amidst the clouds in Dubai and the rain soaked streets of a neon lit Chinese city look absolutely phenomenal on the Xbox Series X. The character models themselves look great too, as does the arsenal at the disposal of Agent 47. 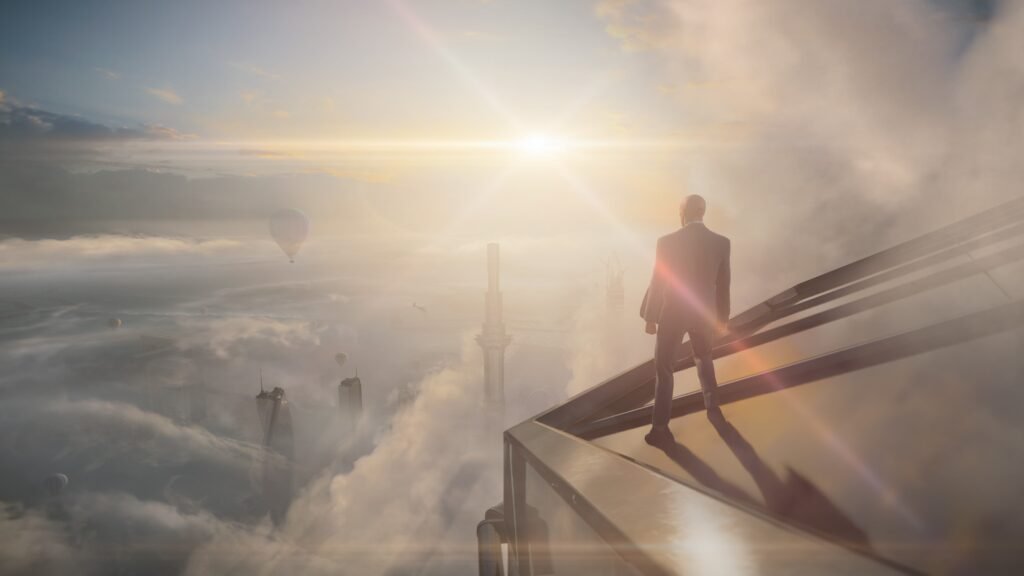 The sound design is impeccable too, with an excellent variety present in the score, ranging from ominous to electronic and thrilling. The pacing and urgency of the gameplay is largely complimented by the score, presenting players a complete experience from gameplay all the way through to its audio/visual companions. 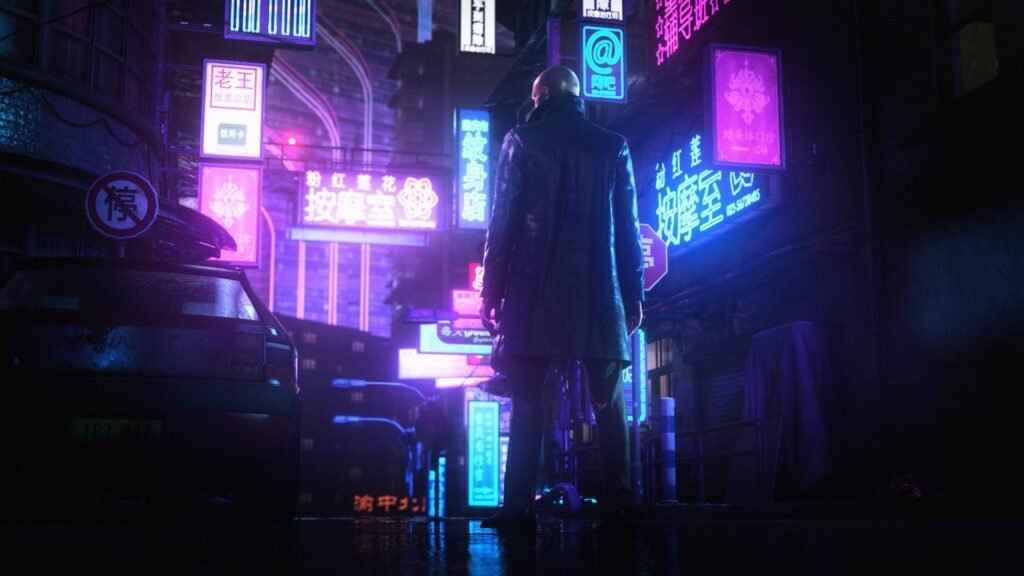 By including and embracing the pair of games that preceded this conclusion to the trilogy, Hitman III is a definitive experience, nearly presented in a tidy and accessible hub to enjoy the best of a nearly five year journey with Agent 47. There are an astonishing number of ways to play each and every mission with each playthrough as unique as the player wants it to be. With its strength not showing though as clearly in the narrative there is no mistaking the strength of the gameplay and replayability on offer.

+ Variety of modes and challenges 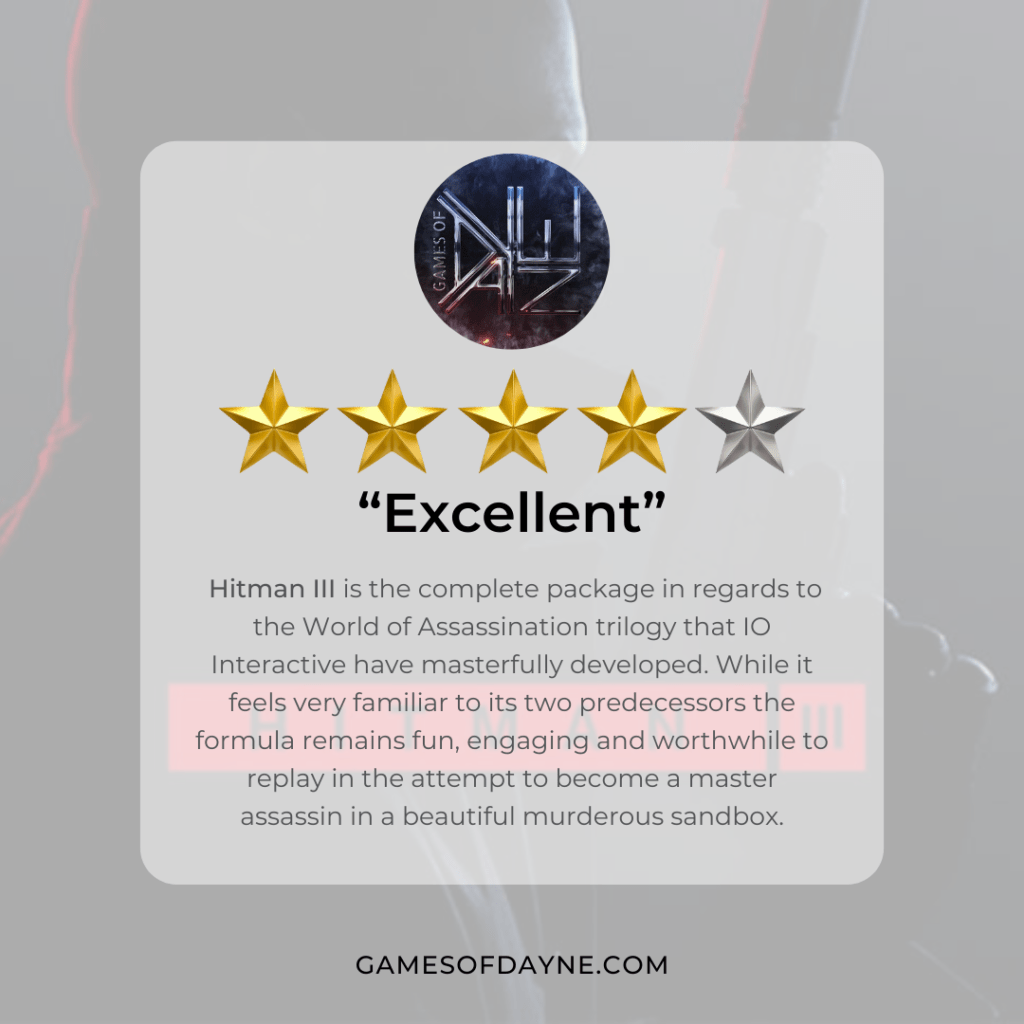