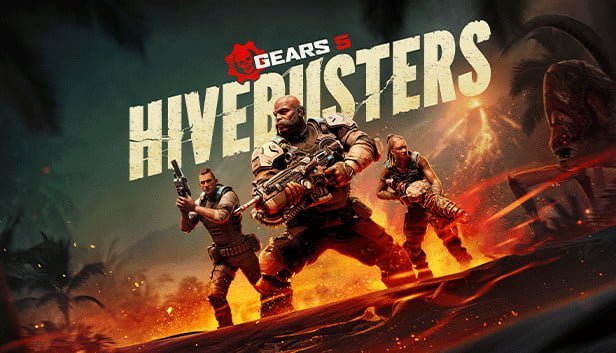 Gears 5 saw the introduction of Hives, a mode pitting a trio of characters against the unrelenting Swarm in an attempt to destroy it from the inside out and escape alive. Previously only available as a multiplayer mode, Gears 5 now has a standalone DLC called Hivebusters which serves as an origin story for Scorpio Squad.

Keegan, Lahni and Mac, all previously playable characters in Gears 5 comprise the elite team. With the sole purpose of infiltrating Hives and destroying them from within, this story shows how they came to be the unstoppable force they are today. 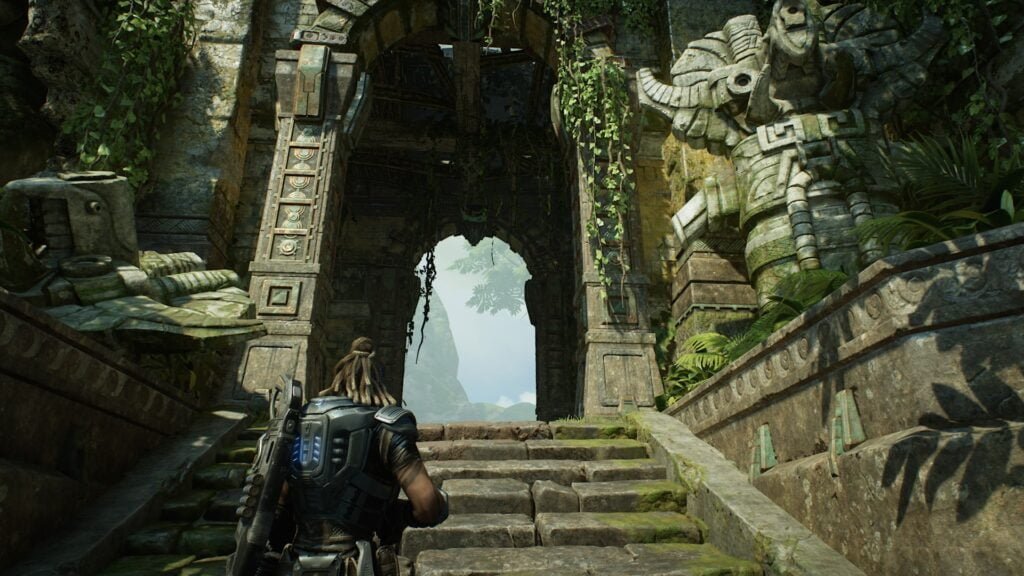 Traveling on a Condor in the middle of a violent storm, Keegan, Lahni and Mac have been hand selected for a secret mission, the destination of which is unknown to them. Forced to bail as their Condor is stricken by the Swarm, the plane is sent hurtling to the beaches of the tropical island below. 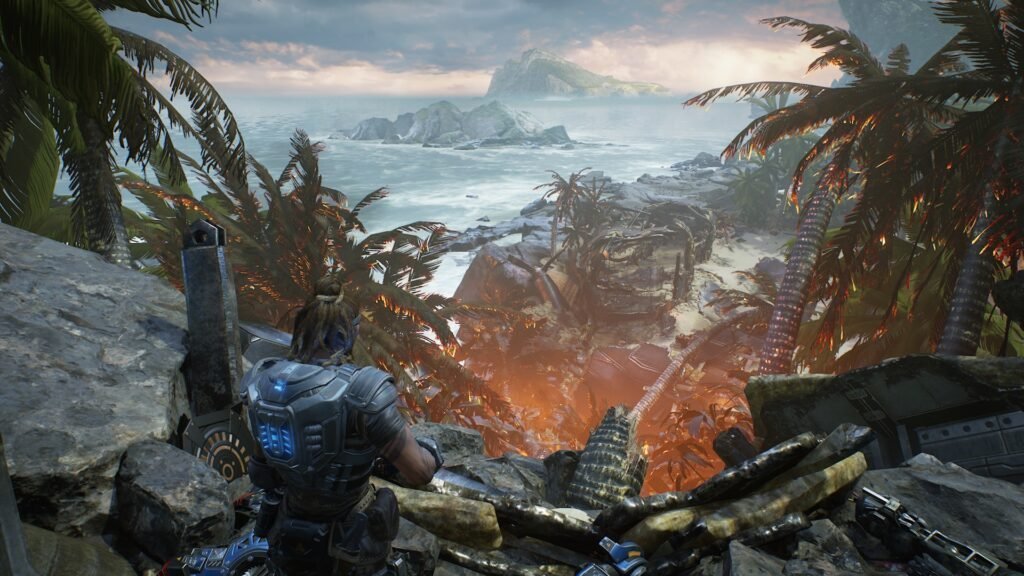 Upon reuniting the trio search for the cockpit in an effort to use the radio to call for extraction. Encountering a Swarm soldiers on the ground, they must fight until help arrives and transport them to safety, narrowly avoiding an attack from an unseen acid spitting monster that decimates the Swarm from the trees. 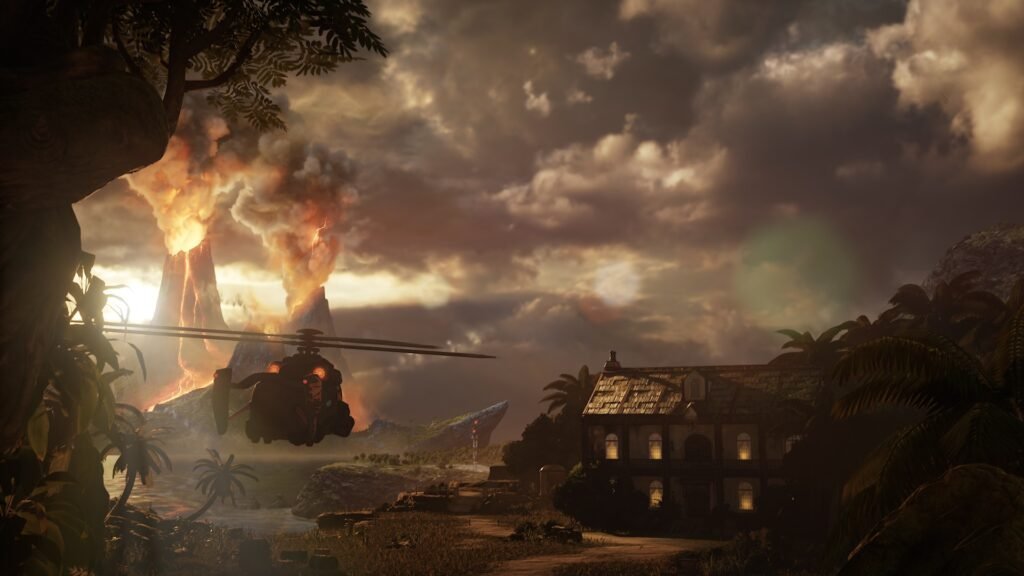 Greeted by Hoffman, the three are sent to a hive beneath an abandoned COG doomsday bunker to destroy it with a bomb. With the plan not going as smoothly as hoped and Scorpio barely escaping with their lives, a backup plan is established that sees them seek out the acid spitting monster from the beach to extract its venom to create a more powerful bomb capable of wiping out the Swarm as they had witnessed. 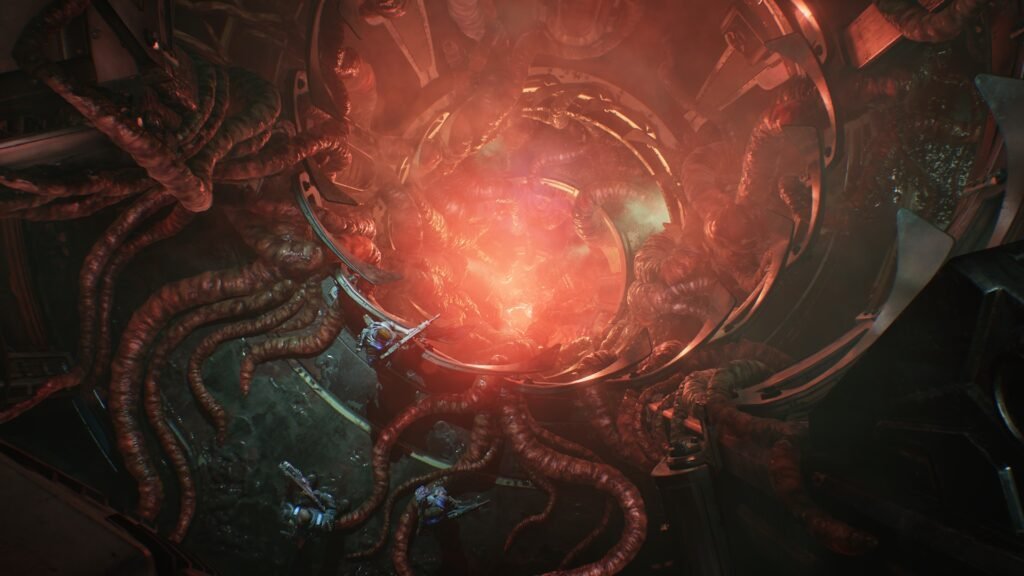 The adventure that follows is an adrenaline pumping thrill ride full of danger such as volcanic activity and ancient ruins overrun by the Swarm for Scorpio to survive. Each of the characters’ backgrounds are reasonably fleshed out as they push forward with their mission and it becomes clear that these three share a bond that make them the perfect team. Their characters themselves aren’t as interesting as how they ultimately accept each other which is a shame, creating an uneven narrative on a character level while the overall story works better despite this. 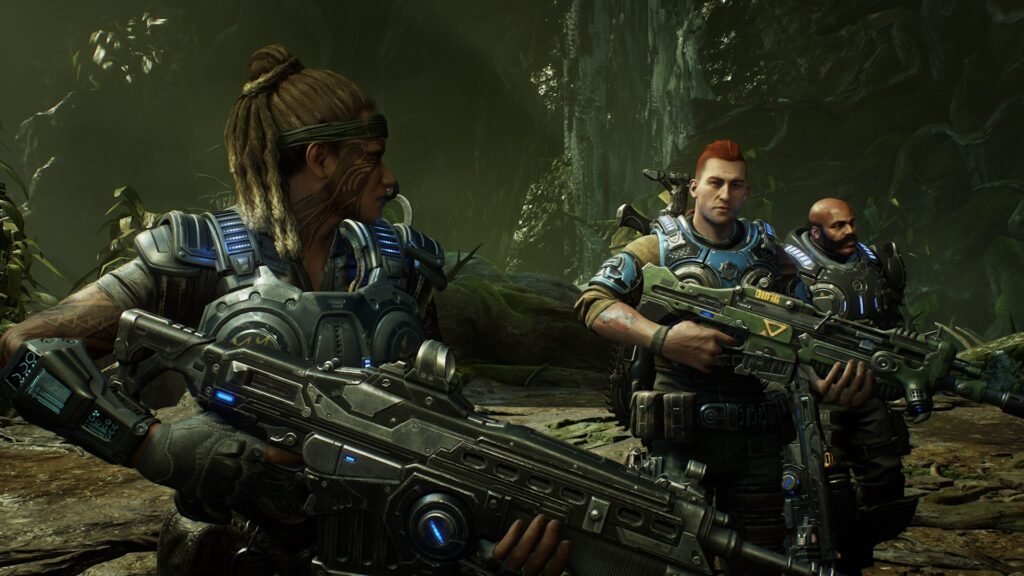 This 6 chapter story takes about 2 and a half hours on the lower difficulties and feels like an authentic companion to the Gears 5 campaign. The harder difficulties will of course challenge even the most capable players and is certainly a true test of skill.

The campaign can be played as any of the three characters with the other two being controlled by AI or other players locally or online. Playing as Keegan, Lahni or Mac has no consequence on the story, instead, character selection will only be different based on the unique ability that each character possesses.

Keegan can deploy a temporary ammo source to replenish ammo for himself and those around him, Lahni has an electricity infused knife and Mac can summon a shield that moves with him. Each characters abilities can be upgraded by finding hidden upgrade packs in the world. If playing alone, ally abilities can be triggered with simple controls. Each ability requires a brief cooldown which is displayed on screen before they can be used again.

The gameplay is exactly as can be expected when compared to Gears 5. It’s fast paced, tight and as responsive as ever. The assortment of weapons at the player’s disposal is varied enough to satisfy players of all types whether they like getting in close or plucking their foes from a distance. 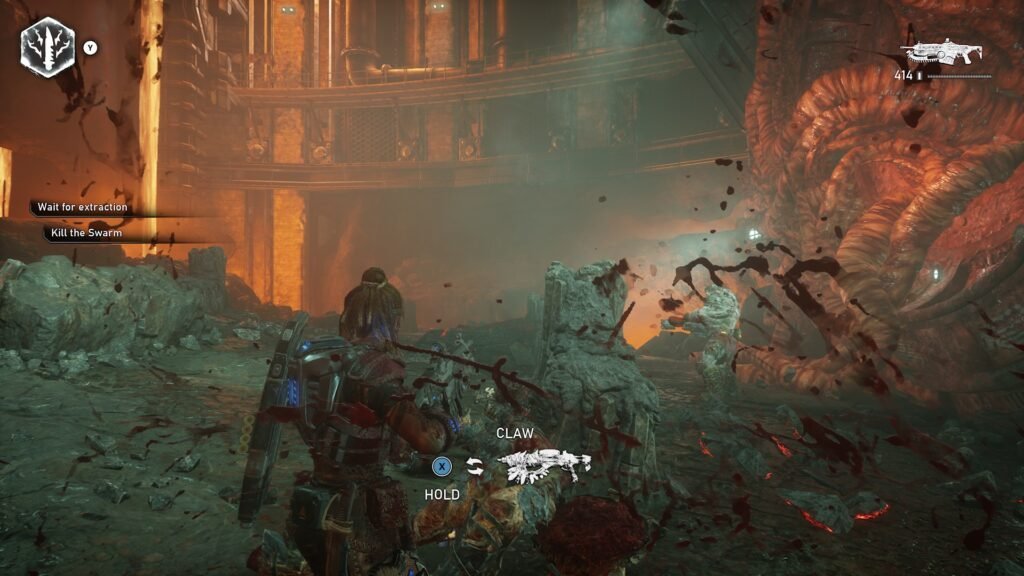 As players of the series have become familiar with, enemies will attack furiously and from all angles, particularly on higher difficulties. This keeps the experience a challenge at all times and allows breathing room for only mere moments before throwing more chaos at the player. 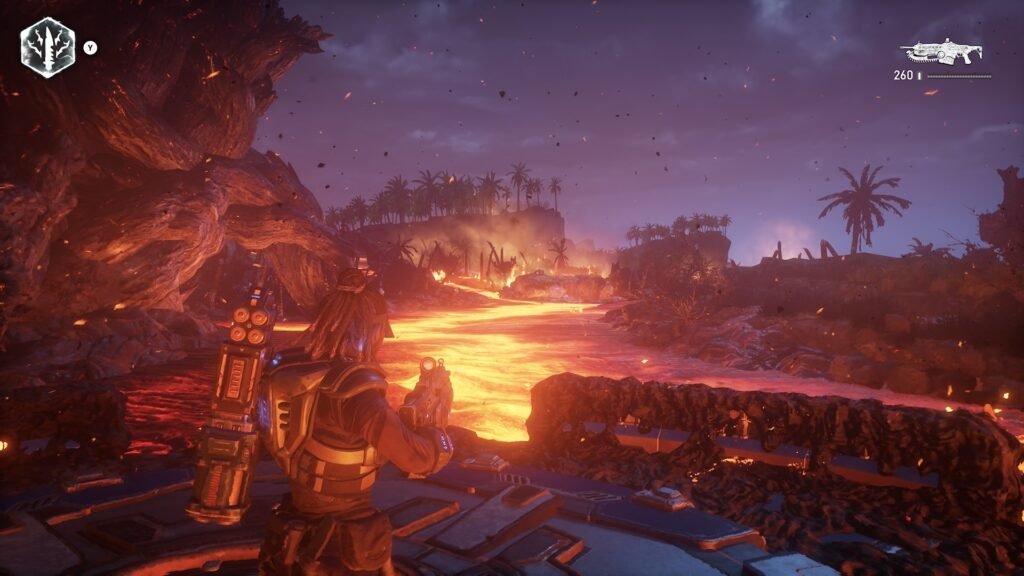 Gears 5 has always excelled with its gameplay and Hivebusters is no different. As far as mixing it up goes, the combat remains unchanged but some of the epic set pieces that include the likes of floating down a stream of lava on a giant metal door while gunning down the Swarm keep the action itself feeling fresh and distinctly unique from the base campaign of Gears 5.

Show me the power

Hivebusters looks absolutely phenomenal on the Xbox Series X. The world of Gears has never looked more stunning by offering a lush and vibrant jungle backdrop for the most part, flashing colours the series has so long been without while also remaining faithful to its gritty and grungy locales fans have come to know and love. 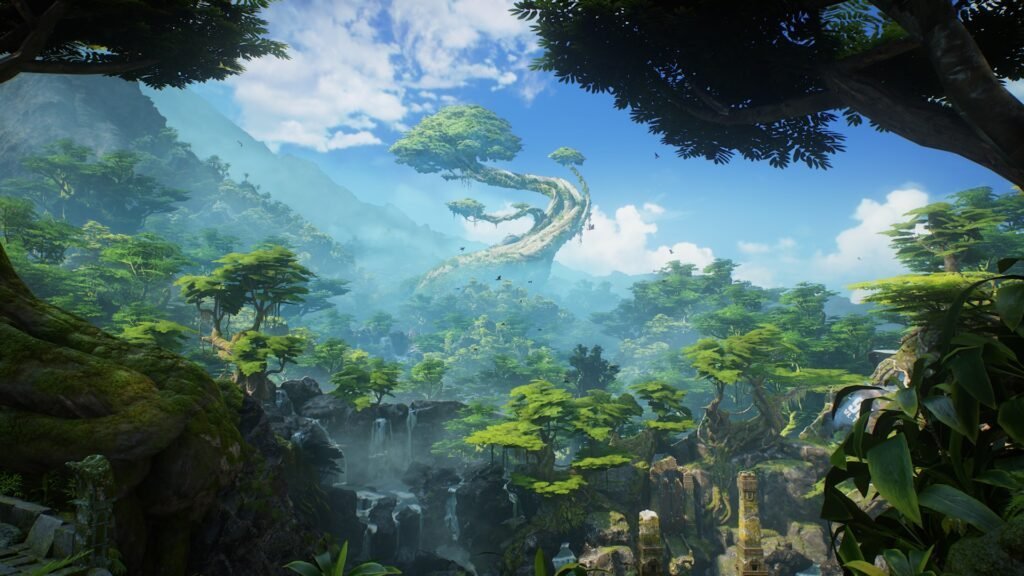 The environment is hands down one of the most striking that can be experienced on any console, period. Hivebusters is proof that Gears can continue to freshen things up while not doing so at the expense of what has made it great for over 14 years. 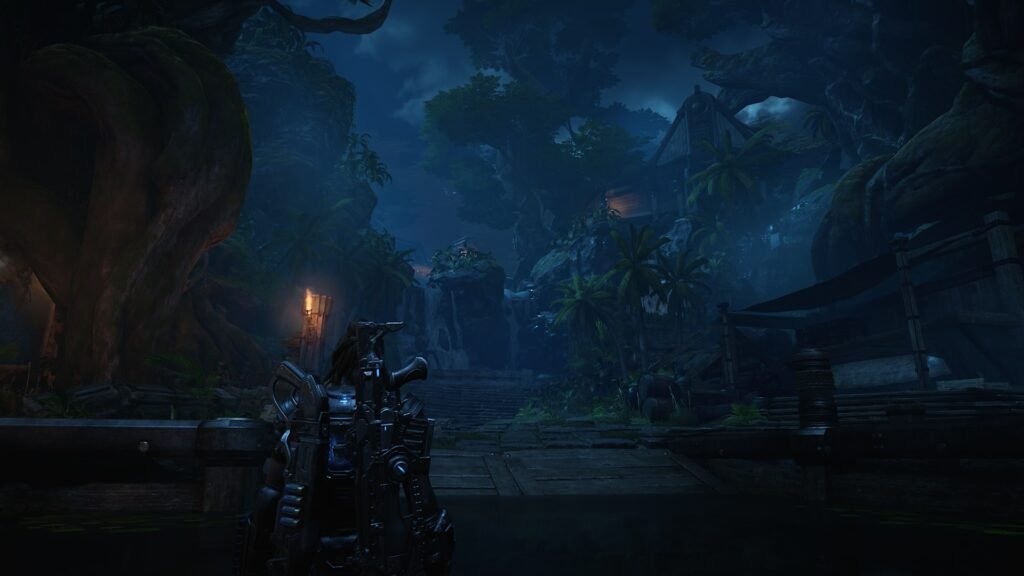 While the story itself isn’t as engaging as the brutal third person shooting, what Hivebusters succeeds in is providing a meaningful backstory for the trio that comprise Scorpio Squad in the Hives multiplayer mode. These characters are now more than just 3 elite ass-kickers, they’re 3 elite ass-kickers with a story and a journey that truly brought them together. 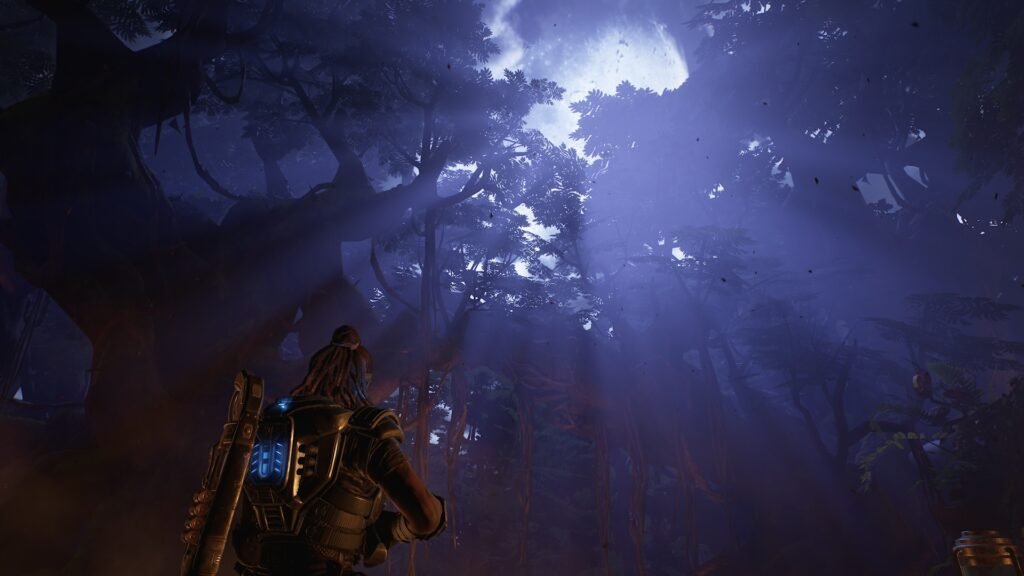 While they individually don’t bring a lot to the table in regards to emotional depth, what they are as a team has been impressively realised and displayed across an action packed Swarm slaying adventure that feels like a legitimate Gears campaign, albeit a brief one. Hivebusters is a must play for fans of the series, especially if it can be played on an Xbox Series X.

Developed by: The Coalition

Ori and the Will of the Wisps Review