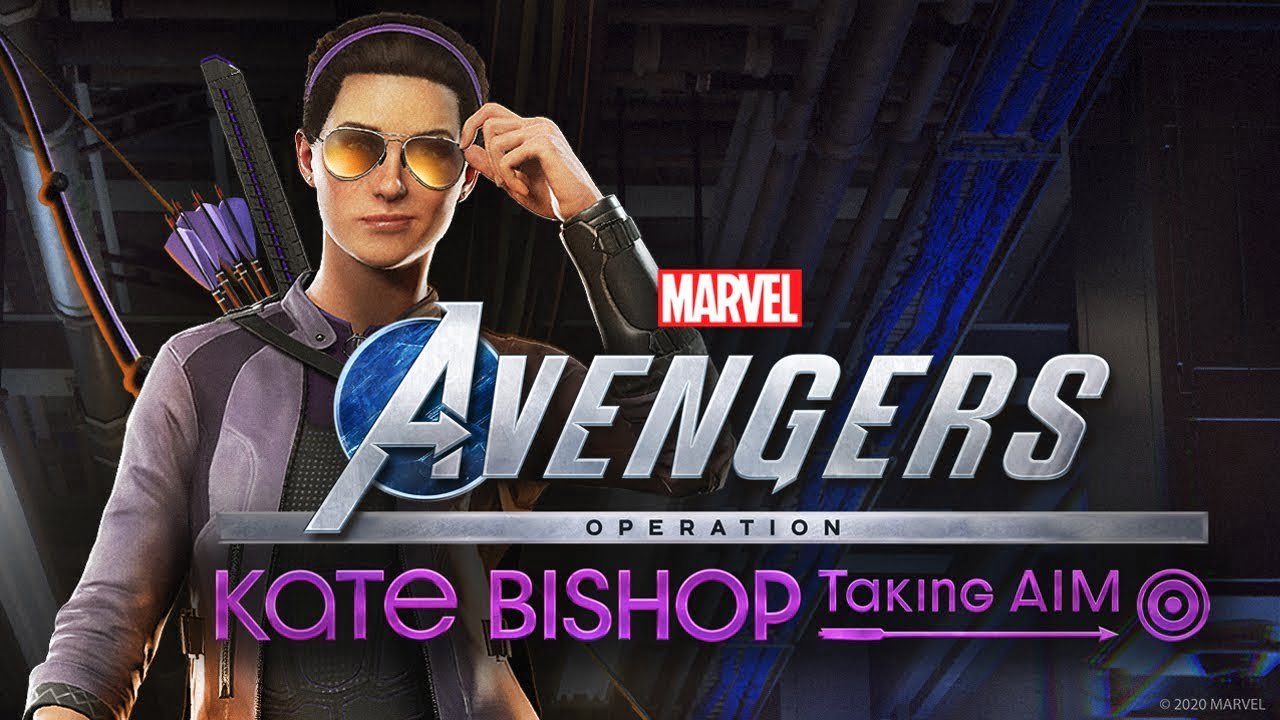 Operation Taking AIM marks the first of many new content releases to September’s Marvel’s Avengers. This Operation brings with it 6 missions that progress the story from the events of the main campaign while introducing a brand new playable character in the form of Kate Bishop. Mentored by fan favourite Clint Barton, AKA Hawkeye, Kate teams up with The Avengers to save Hawkeye ahead of the next Operation titled Future Imperfect.

Kate is no stranger to sarcasm, exerting a playfully sarcastic energy that injects levity to the team despite the very grave and game changing stakes at play. Following a trail of bodies decorated with arrows, The Avengers find Kate more than capably holding her own against A.I.M. in a facility using stolen A.I.M. tech that grant her short range teleportation abilities. 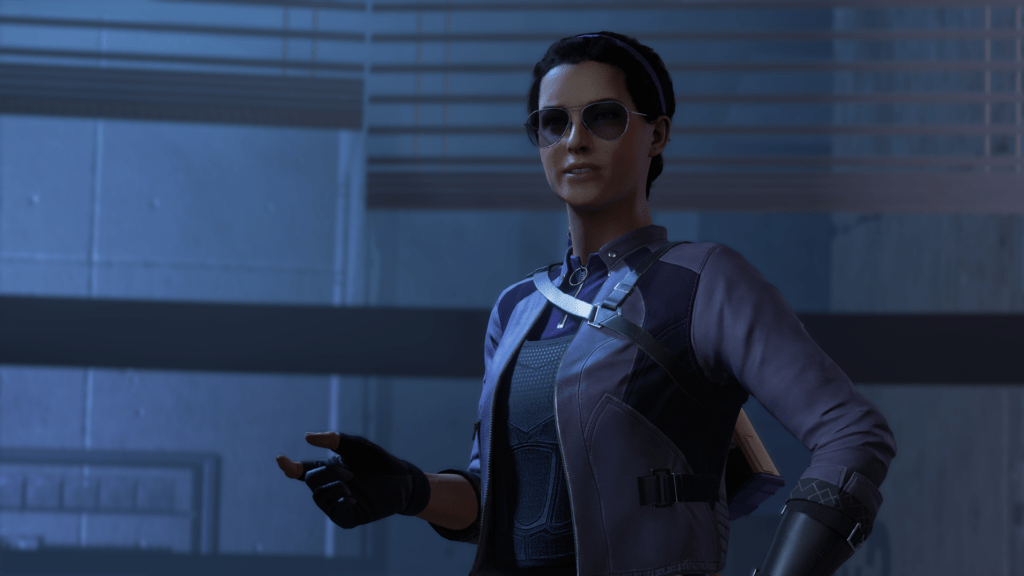 Using this newfound tech to devastate A.I.M. through a brief mission chain that takes no more than an hour and a half to complete, Kate’s personality works well within the dynamics of the established team as she proves herself with confidence in her abilities to be a serious ass kicker while still running her mouth. 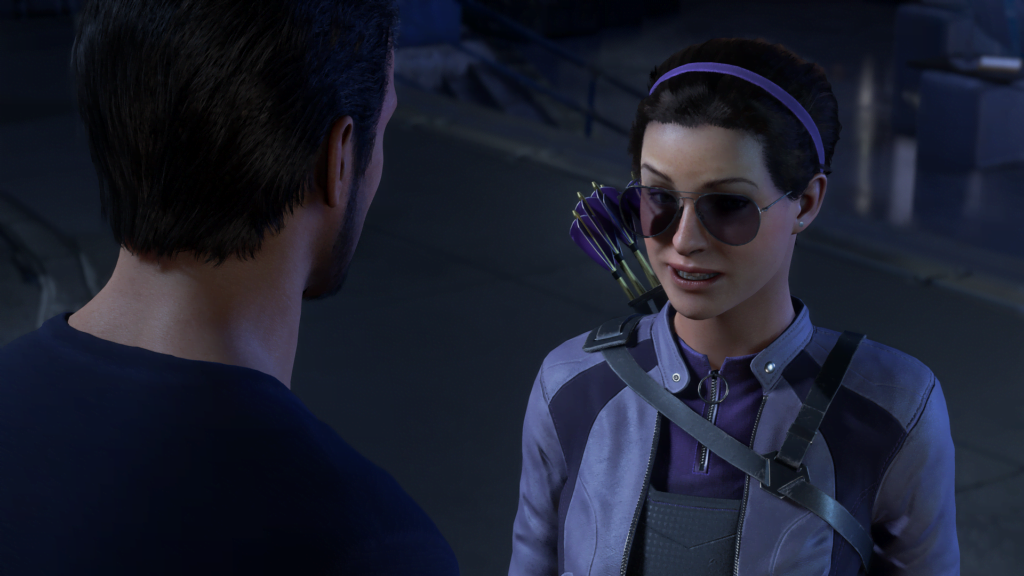 Tracking Tachyon pulses like a breadcrumb trail of A.I.M’s sinister plot, The Avengers must navigate this wild storm and save Hawkeye from Monica Rappuchini, antagonist of the main campaign. Learning all is not as it seems, the team must steal some tech to create a time bridge to travel one day in the past to save Hawkeye and foil Monica’s schemes.

Unfortunately, 2 of the boss battles are Dreadbot/Warbot encounters which have been thoroughly exhausted through the base game in both the story and the Avengers Initiative multiplayer component. The final boss encounter is a little more original though the enemy itself, the Super Adaptoid, is merely an alteration of the existing Adaptoid enemy type. Possessing powers of various members of The Avengers, the Super Adaptoid has a shield that can deflect and be thrown like Captain America, a gigantic hammer like Thor and Repulsor tech to fly like Ironman. This enemy is a nice addition to the extremely limited villain pool that consists entirely of Abomination and Taskmaster but isn’t varied enough to feel truly different from the enemy type he is modelled after. At the conclusion of this story extension a greater evil is revealed, setting up Hawkeye’s upcoming Operation Future Imperfect with ramifications for their universe as a whole. 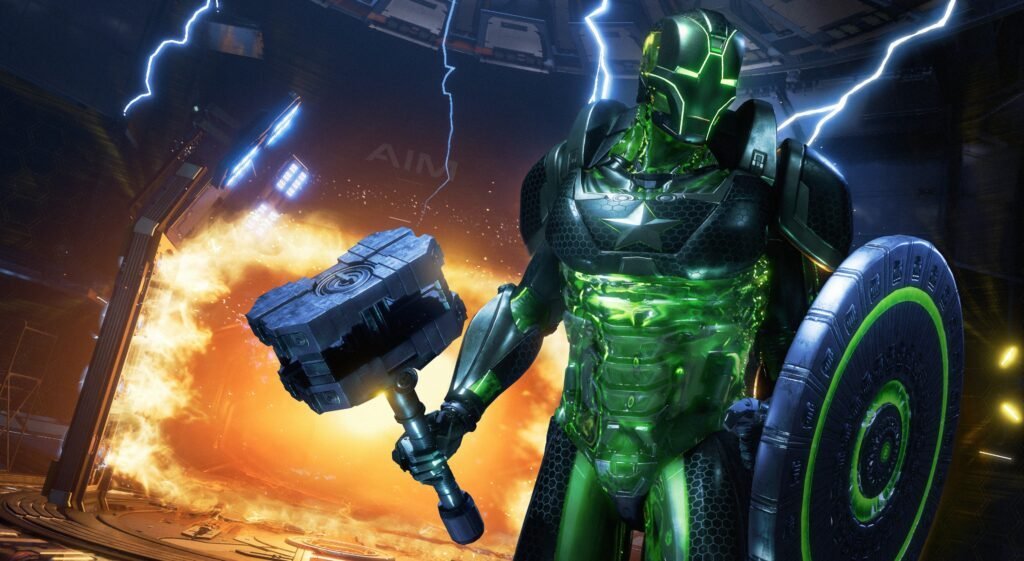 Kate is wonderfully brought to life by the amazing Ashley Burch. Fans may recognise her as Tina from Borderlands 3, Aloy from Horizon Zero Dawn and Chloe Price from Life is Strange. The  charm and charisma Ashley brings to Operation Taking AIM. and Marvel’s Avengers overall is most welcome.

Along with the main story chain, as with each of the other Avengers, Kate has an Iconic Mission Chain that upon completion rewards a unique cosmetic appearance. Completing this will likely come naturally by playing through Kate’s Operation and will also require the completion of Kate’s unique H.A.R.M. Room Challenge. It is easy to recommend doing her H.A.R.M. Room first in order to become familiar with her tech and abilities, making the story more accessible with familiarity in her playstyle.

Kate is an expert archer mentored by Hawkeye. This style has translated very well into Marvel’s Avengers gameplay mechanics as she feels fast, effective and most importantly fun. Able to shoot single standard arrows, a trio of horizontal arrows or an explosive tipped variant, Kate is able to effectively clear out individuals or groups with ease. 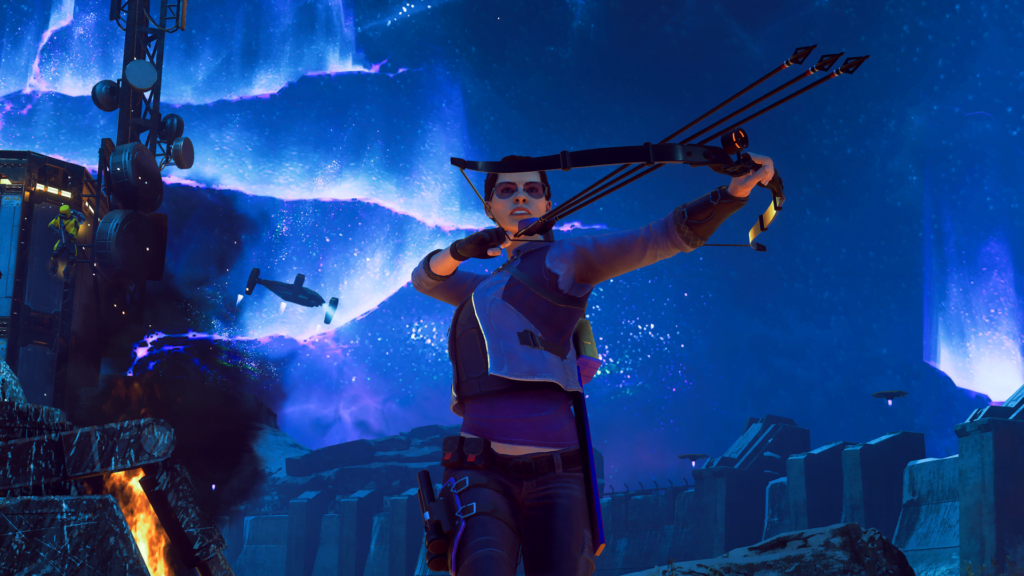 If getting up close and personal is preferred, Kate is equipped with a katana that makes short work of her foes. Her abilities enhance her swordplay and ranged attacks by fusing her teleportation to allow for short range leaps to transport her closer to her enemies or allow an arrow to be shot that transports her to its destination too. 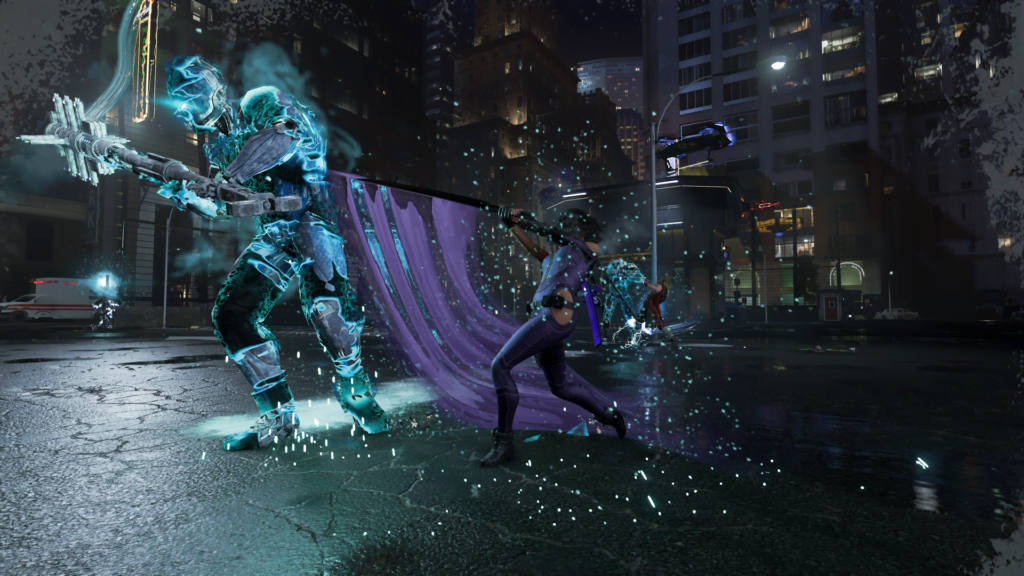 If the ranged and melee attack combos aren’t enough, Kate also has a decoy that can be deployed to draw enemy fire and can be upgraded to actually inflict damage on its targets as well. With further upgrading, Kate is able to occupy her decoy and take its place, making Kate extremely versatile in environmental traversal and for navigating the battlefield swiftly. 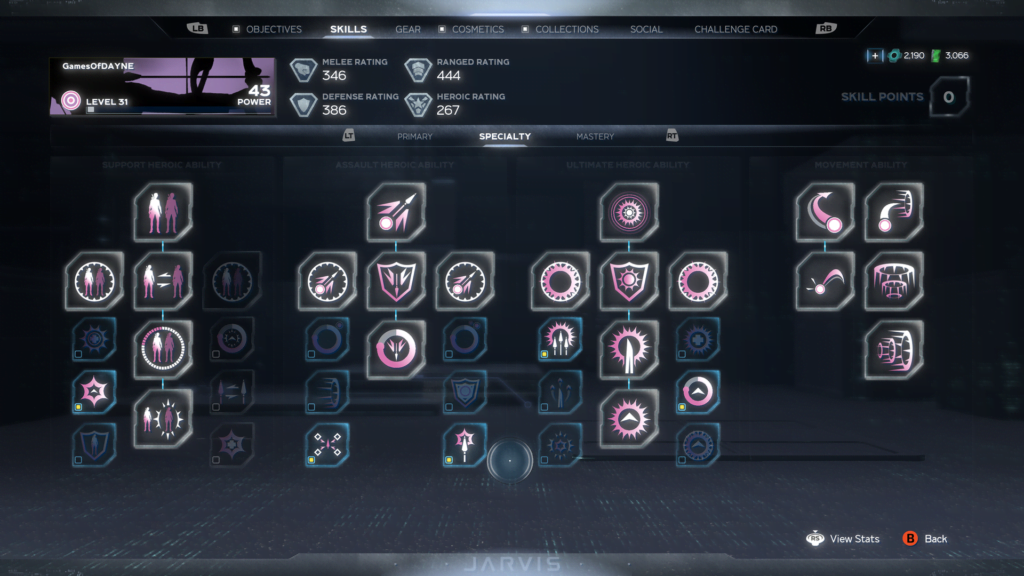 Kate’s Assault, Support and Ultimate Heroic Abilities are all a lot of fun to experiment with. Various options increase her attack range, damage and attack types that result in interesting combat opportunities. Each time Kate levels up the player is awarded one skill point to allocate to her skill tree. By completing all missions in Operation Taking AIM the player should easily be about level 30, with a level cap of 50 most of her abilities can be unlocked ahead of moving onto the Avengers Initiative missions to continue playing beyond this Operation. Kate also has a Hero Challenge Card which is unlocked by spending 1,000 Credits. These can be obtained by completing levels of the base 6 characters challenge cards or purchased with premium currency. The Challenge Card itself can be progressed by completing a pair of daily and weekly challenges regularly or by purchasing Tier skips with Credits. New outfits, nameplates, takedowns, Credits and crafting materials will be awarded upon reaching every one of the 40 Tiers. 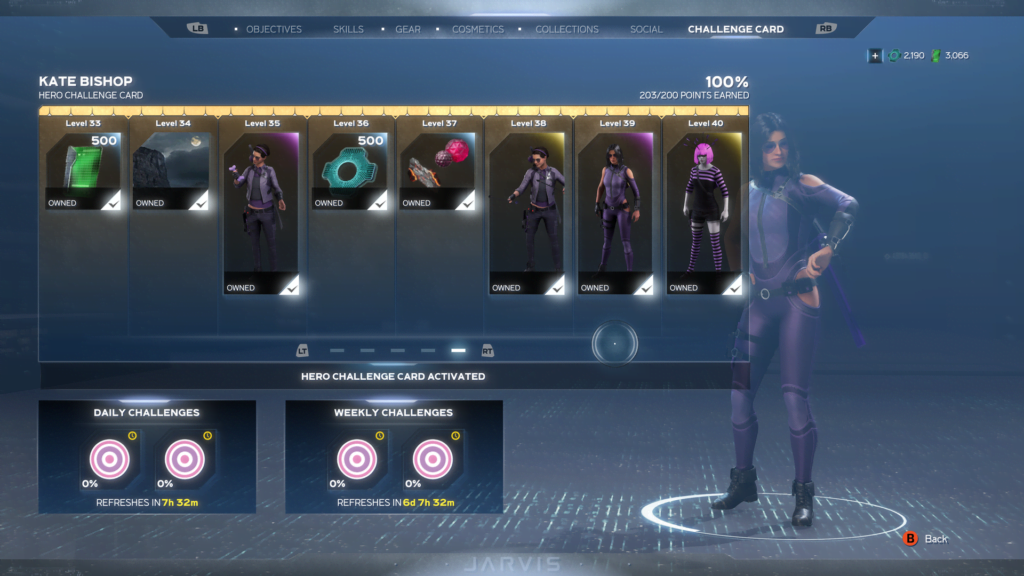 Operation Taking AIM is an enjoyable content drop, the first of many to introduce new characters, villains and maps in the future. Unfortunately by not bringing a new map with this Operation and by recycling boss battles, the introduction of a new villain, while appreciated, is not different enough to be as satisfying as it could be. A new hero though has been much needed and Kate is such a fun addition to the team. 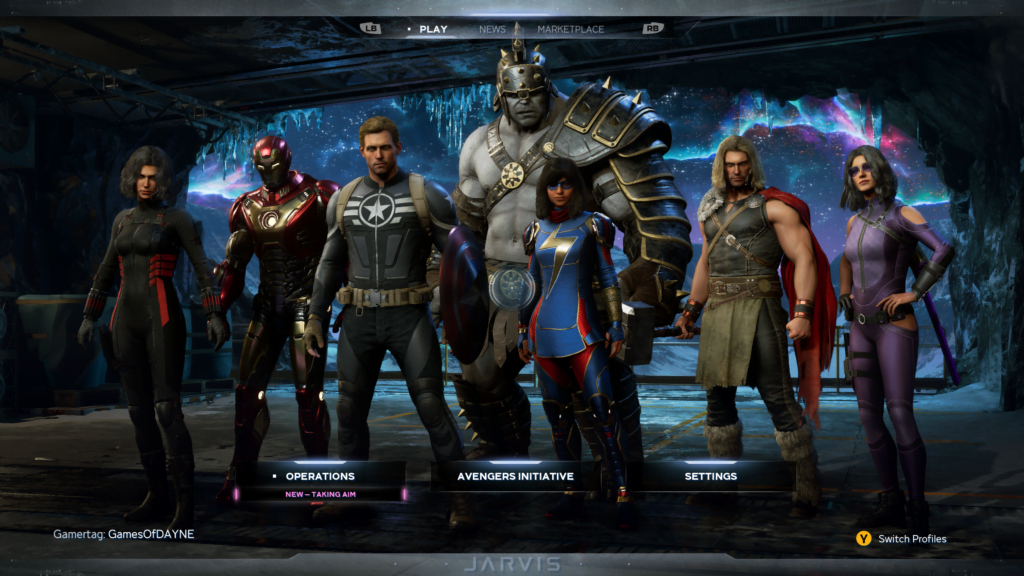 A feeling of repetition in the mission variety, locations and enemies hold the Operation back which is a genuine shame because Kate is such a wild personality with fun and unique gameplay. Feeling a little too tethered to the next Operation, Hawkeye’s Future Imperfect, this one doesn’t quite feel complete and perhaps upon the arrival of Hawkeye, a more concrete resolution to this story arc may be present.

+ Kate’s personality is a lot of fun