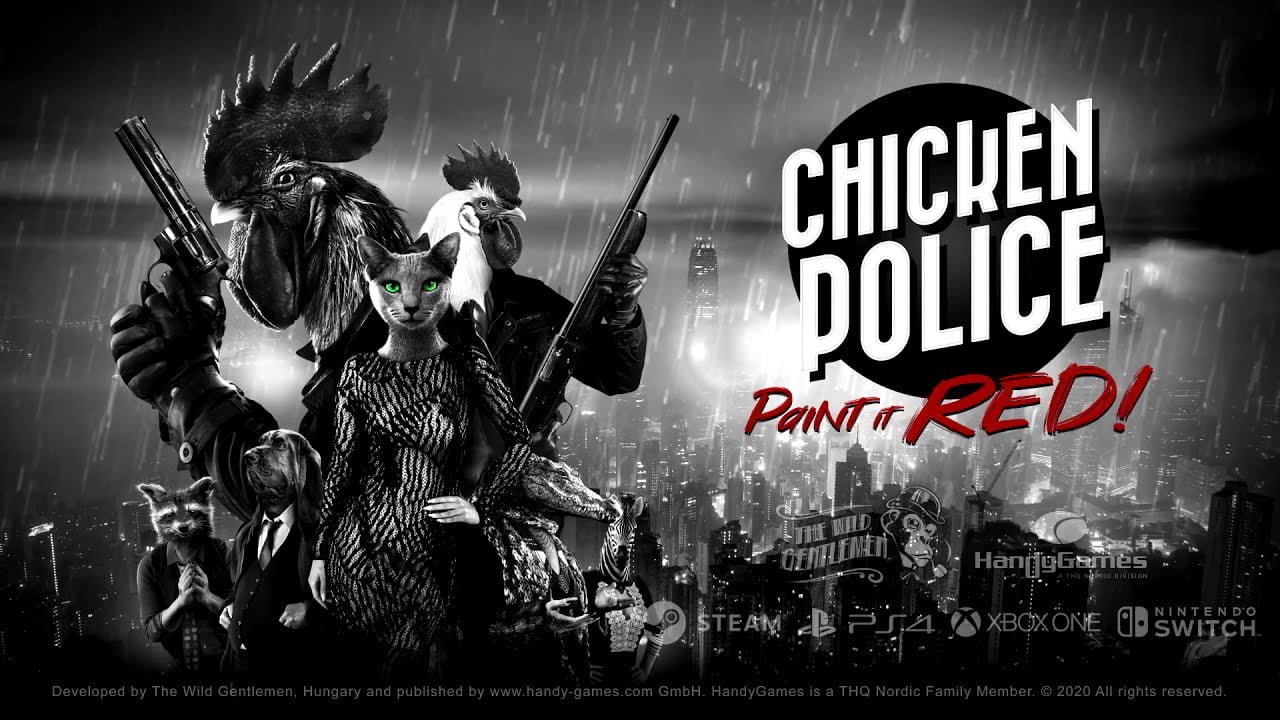 A cluckin’ stylish noir murder mystery from a chicken’s point of view.

On the cusp of retirement with an extremely specific 121 days remaining of active duty, Sonny Featherland is more than your average veteran detective. He’s a chicken, a rooster that’s getting too old for this shtick. The wise cracking Sonny enlists the assistance of Marty, the pair formerly known as the Chicken Police, to crack a case of murder and deception.

Stylised as a mixed media blend of photography and 3D models with seamless near photorealism to create these anthropomorphic human-bodied, animal-headed hybrids, Chicken Police is a slick noir point and click adventure that always packs quite the punch in the humour department.

Taking place in Clawville City, a fictional city in the world of The Wilderness, Chicken Police wastes little time in setting the scene for this noir adventure. Sonny Featherland enters his apartment to be greeted by Deborah, a deer in desperate need of Sonny’s help. With a lead to follow up on, Sonny swiftly embarks on a case embroiled in deception with some of Clawville’s most prominent figures. 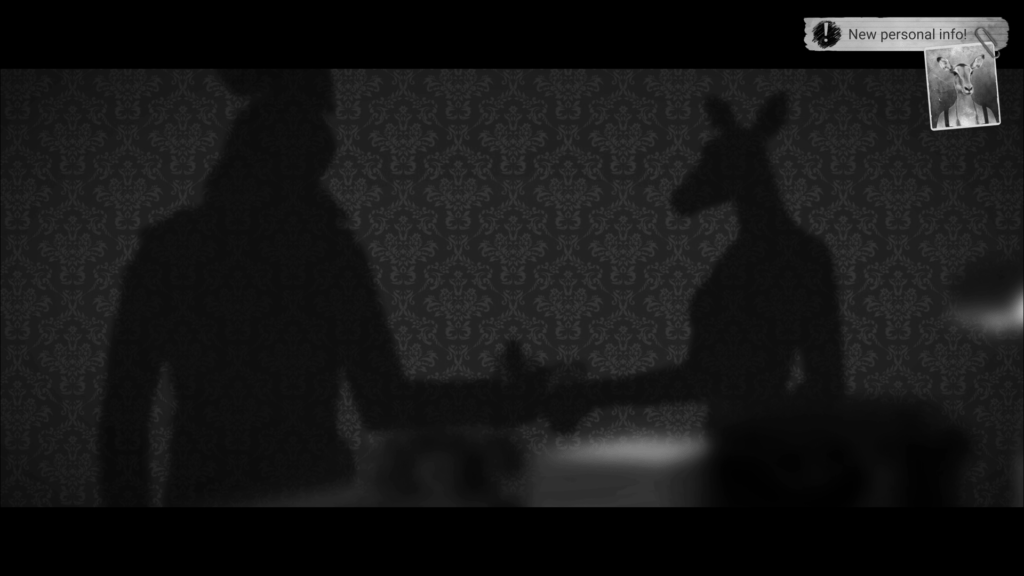 Broken into four chapters, Chicken Police has players investigating various locations in Clawville City in search of clues to further the investigation. Locations are either permanent locations that can be accessed for the duration of the chapter or limited locations which may not be available for long or until later chapters, encouraging thorough exploration as soon as they become available. In my experience they appear to remain visitable until at least all key clues are obtained, with their limited status seemingly existing for the collectibles and related Achievements/Trophies. The narrative itself remains intriguing throughout with each of the supporting characters shrouded in mystery and questionable intentions. The interconnection and relationships they share are interesting and when thoroughly explored through effective interaction and engagement, the investigations at the end of each chapters are easily solved.

The core gameplay has the player exploring a variety of settings with a cursor, scanning the room and clicking on interactable objects and characters to discover clues or in many instances a laugh. Though rather safe for an investigation driven story, the point and click formula works well, particularly with the artistic approach to the stylisation of the experience. The dialogue played out very similar to a visual novel, adding to the diversity of genres Chicken Police manages to cover effectively. The personalities of every character is well conveyed with sarcasm and banter in the front seat of most conversations. There’s a clever wit and charm to these interactions that help each character feel meaningful and unique. Sonny aside, there is perhaps no one more foul mouthed and quick witted than his former partner Marty, who once shot him but agrees to help him with this case. Their history is fun to explore and have laid bare, giving this buddy cop adventure a more genuine feel with their awkward bond. An extremely light sprinkle of gameplay variety is introduced in the form of a pair of car chases where the player has to shoot enemy cars, a shooting range and a race against the clock to escape a raging inferno. These are refreshing breaks from the otherwise visual-novel-esque dialogue and point and click investigative sequences but may not be enough to satisfy some players looking for a bit more depth. There is a very sexualised representation of women in Chicken Police. A number of seductive paintings in particular show beautiful figures in sensual poses that work surprisingly well with the animal infusion to their figures. I personally didn’t expect to see a painting of a naked woman, assets covered of course but with the head of a lizard or a lingerie-clad tiger. They are very cleverly executed and lead into some very entertaining dialogue between Sonny and Marty, the latter of which is very interested in this imagery. 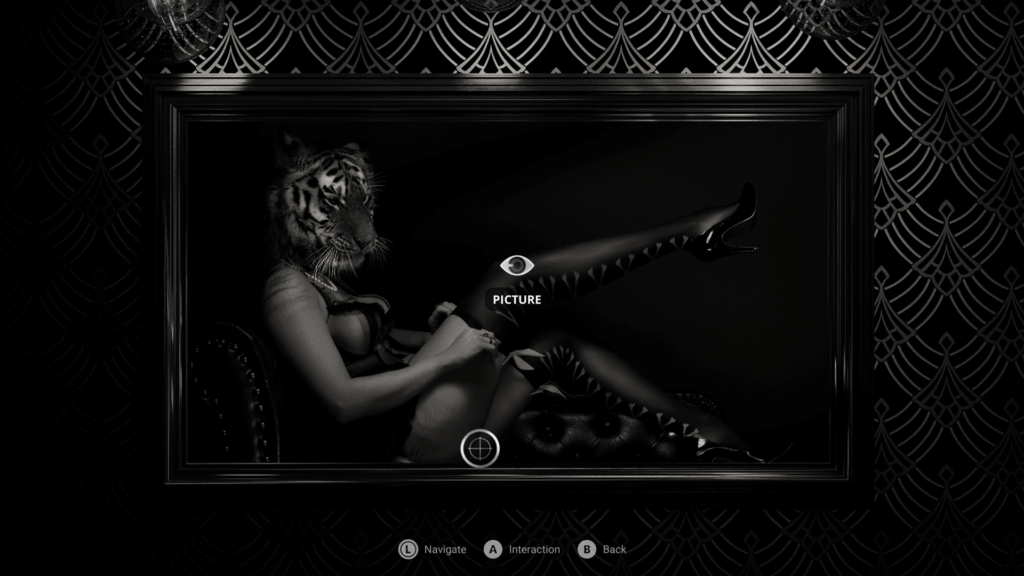 Explicit language and sexualised characters lean towards a very mature and adult experience, one that works extremely well within the confines of the slick noir genre it pays homage to. Some of the themes are little campy and predictable, plot wise included but there’s a charm to the levity that the humour brings to the table. Never taking itself too seriously, Chicken Police manages to blend humour and satire with murder and mystery very effectively.

The Chicken Police are on the case

Interacting with the variety of interesting supporting characters opens new dialogue options and further lines of enquiry. Sonny is able to look at these characters and talk to them, and with enough information either through direct communication or by obtaining other clues throughout the various locations in Clawville, the ability to ask them questions about specific leads becomes available. This too opens up further dialogue options with some other characters, highlighting the importance of thoroughly speaking to each and every character to gather enough pieces of the collective puzzle to come to a successful conclusion in a simple investigation board sequence before the final form of dialogue with certain characters, interrogation. Using all of the information obtained from the handful of locations, which can be fast traveled to freely as long as there is no further key information in the current location, and the quirky characters that inhabit them, Sonny is able to interrogate certain characters. Sonny opens an interrogation and is given an impression that serves a base line clue that remains on screen as visually indicated on his notebook. Exploiting their weaknesses as per these impressions will determine the level of success with the line of questioning. 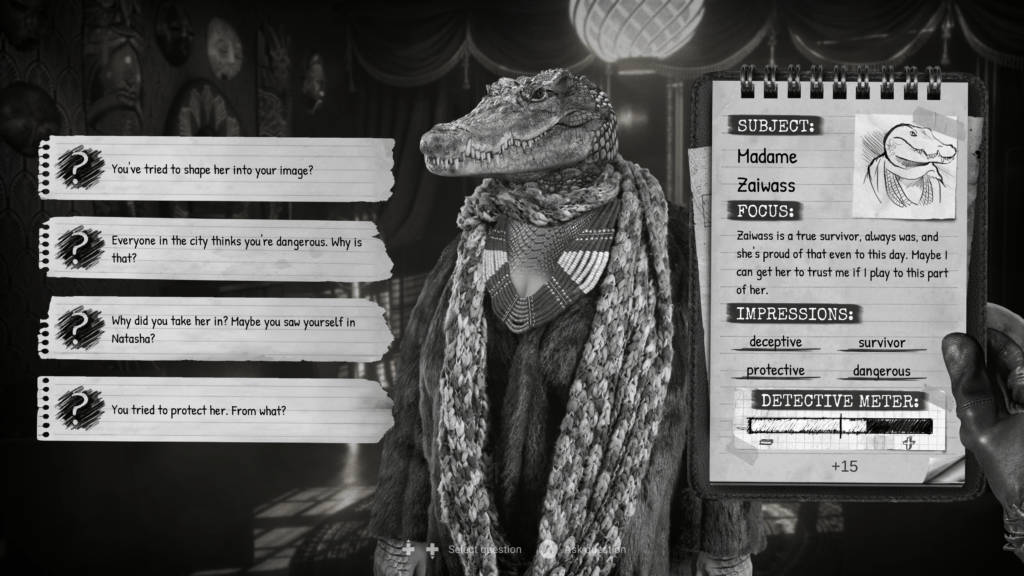 Questions that offend, anger or upset will have a negative impact, decreasing the Detective Meter that measures the success of interrogation or alternatively, it will increase the meter if the question is more appropriate in tone to their behaviour and emotional status. Unfortunately, the level of success of the questioning doesn’t seem to prevent progression as the next sequence will be reached regardless. A player could simply stumble through an investigation by randomly choosing questions without giving them any thought. It’s a shame that the detective work prior bares no impact as the interrogation will be completed no matter what. I was unable to fail any interrogation across two playthroughs despite intentional attempts to sabotage them. At the end of the interrogation the player is measured on the percentage of success of the questions asked and awarded between one and five stars, the outcome baring no impact at all on story progression. Should you be clucked?

Developers The Wild Gentlemen have crafted an enjoyable and incredibly stylish noir adventure ride with the sex, violence and black and white imagery the genre is known for. Any flash of colour is striking and effective, used sparingly for impact and when combined with the jazzy beats, it’s hard to ignore the brilliance of the cocktail. Solid voice acting injects life into the entire anthropomorphic cast that feel authentic. Full of sass, cursing and mystery, Chicken Police is an experience that will satisfy players in search of a dark and thrilling investigation at the expense of more traditional gameplay. 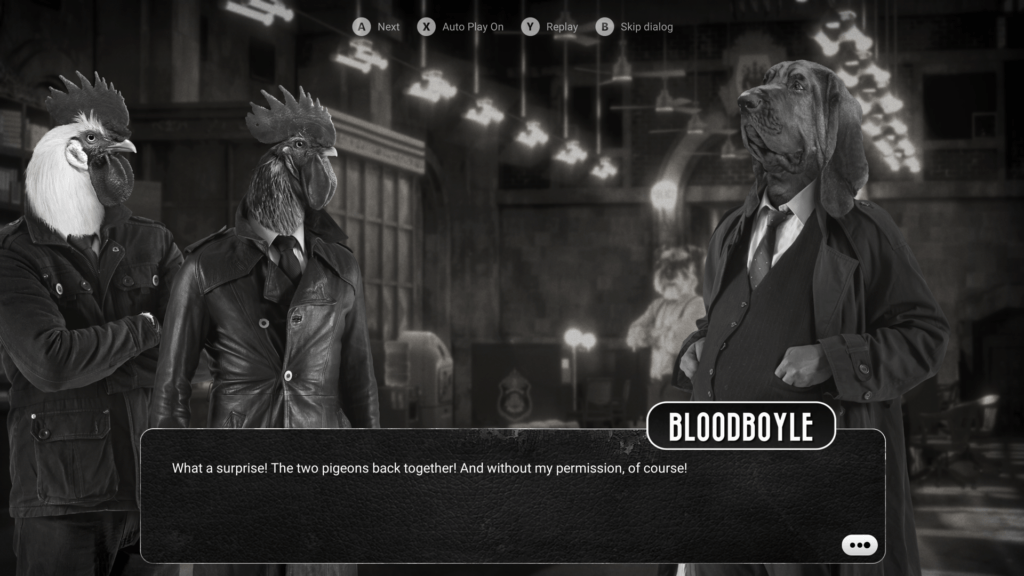 There are more layers to this feather fuelled adventure that is more fun that it has any right to be given its moody tone at the offset but Chicken Police is a cluckin’ good time for players looking to spend 4 or 5 hours getting to the bottom of a good old fashioned noir murder mystery starring a pair of chicken detectives.

+ Stylish and sparing use of colour

– No consequence for failure or clumsy interrogations

Developed by: The Wild Gentlemen