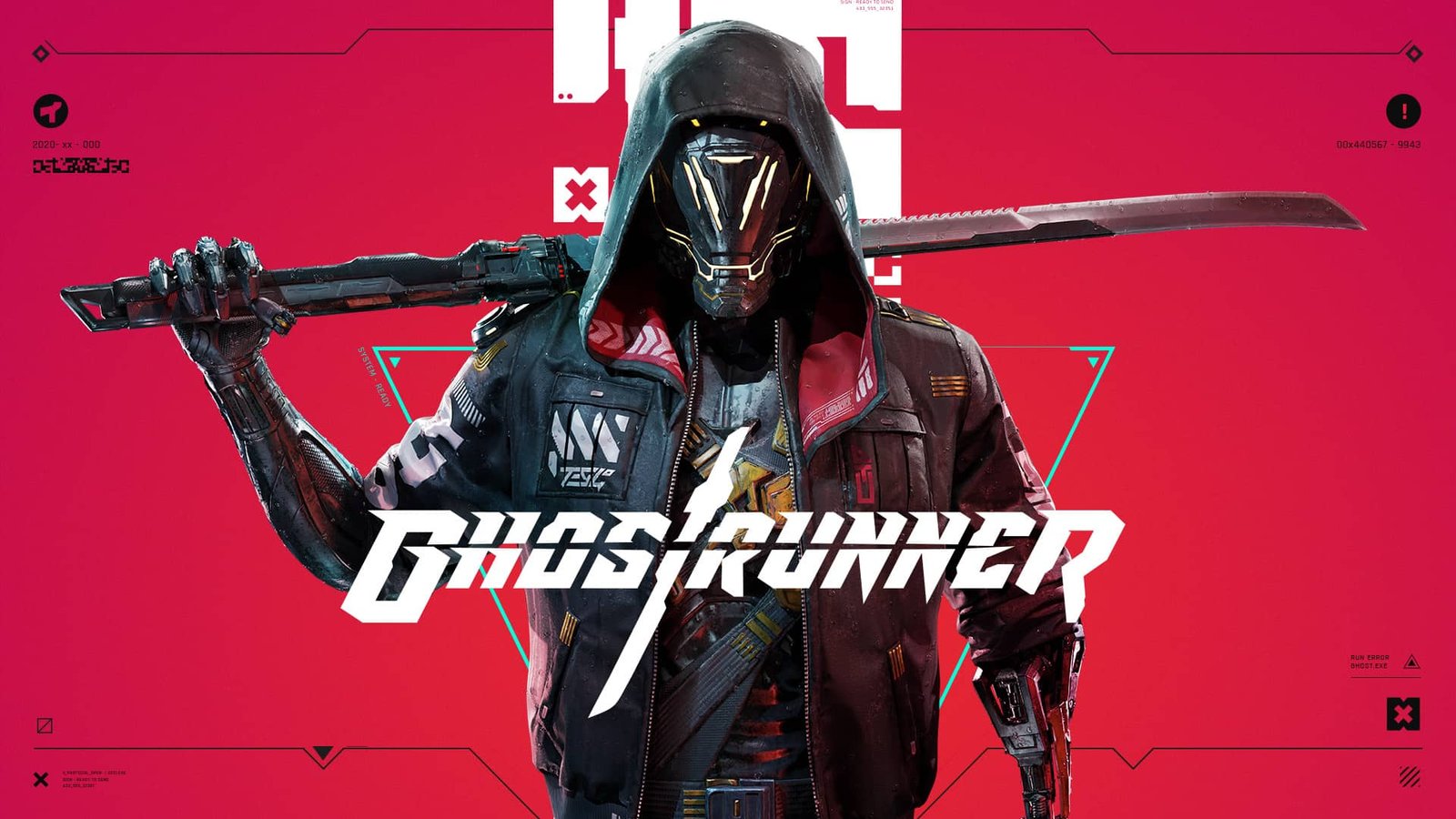 Amidst the backdrop of a grungy dystopian city, a lone cybernetically enhanced swordsmen plays his part in a power struggle between a fleeting resistance and its totalitarian leadership. With no recollection of his own identity, the Ghostrunner must survive with precision focus to ascend the deadly Dharma Tower and free the resistance from its cruel oppression. 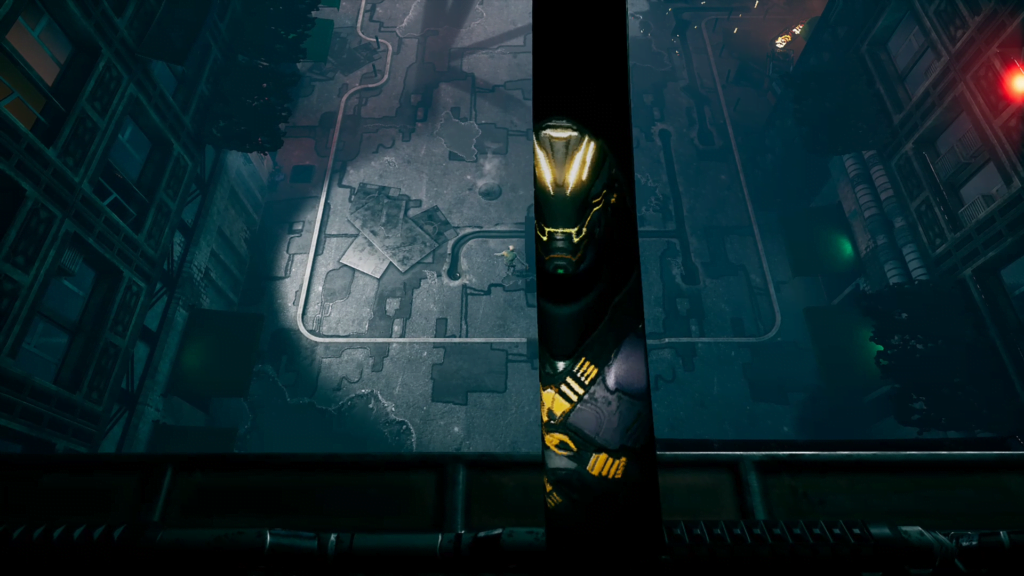 The story wastes little time putting players in the role of the mysterious Ghostrunner who lacks recollection of his own identity and purpose. Quickly greeted by the disembodied voice of an AI that refers to itself as the Architect, the Ghostrunner’s mission is simple – ascend Dharma Tower, home to the last remnants of humanity, to liberate the Architect and dethrone the maniacal Keymaster Mara, thus freeing what few people remain in her clutches. 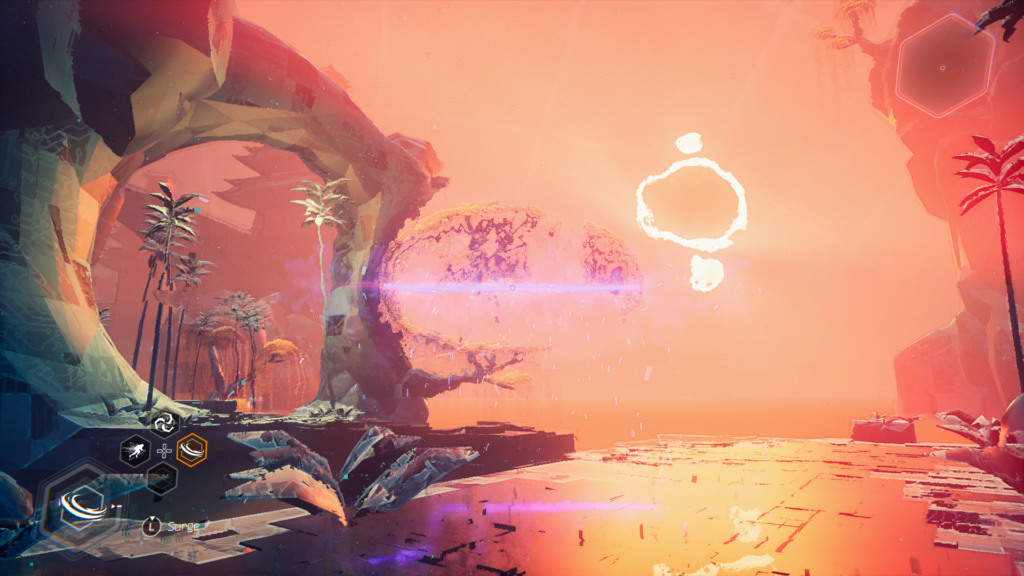 Having created and ruled Dharma Tower, as well as creating the supersoldier-like Ghostrunners prior to his betrayal by Mara which saw the termination of all other remaining Ghosturnners, the Architect serves to guide the Ghostrunner throughout the remainder of the journey. The Architect also teaches the Ghostrunner new abilities through training simulations in the remnants of the Cybervoid, the digital network that once connected the Dharma towers and now is primarily used to support his artificial intelligence-like state. 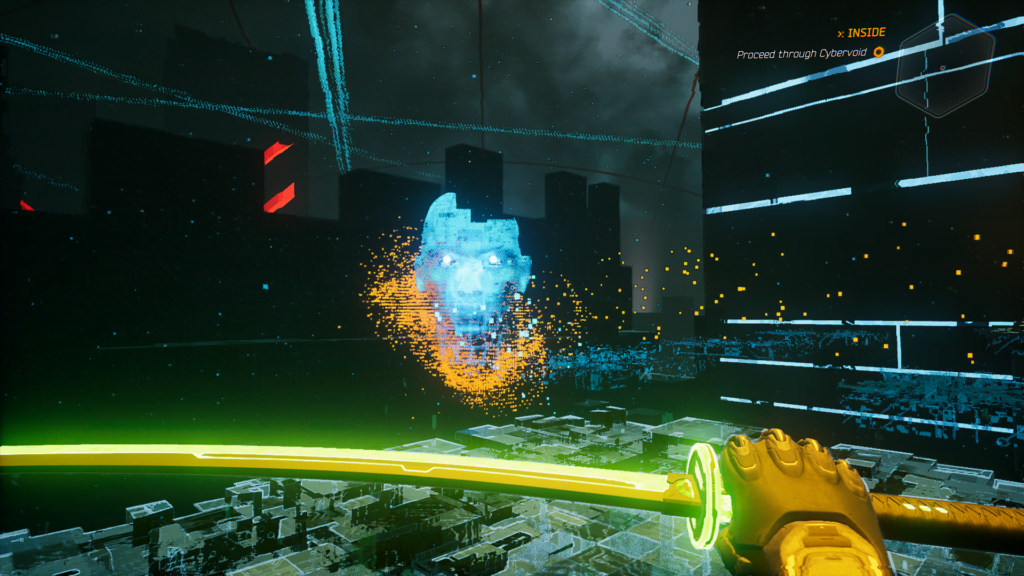 Referred to as Climbers, the resistance group rebelling against Mara, are revealed to have found and repaired Ghostrunner whom they referred to as Jack. Zoe, one of the few remaining Climbers, also provides support and guidance for a portion of the story. 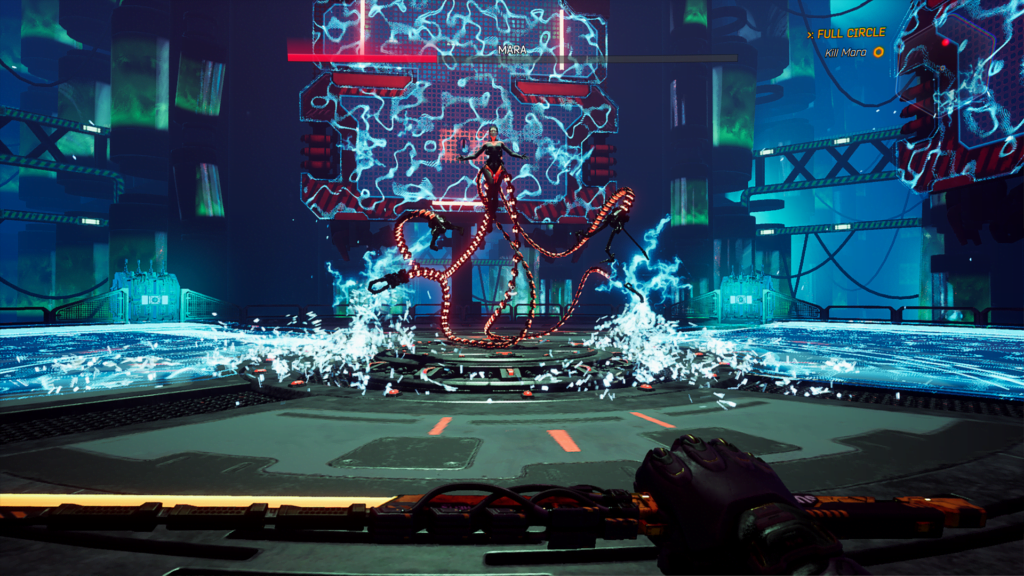 The story unfolds fairly predictably unfortunately with the biggest twist feeling obvious early on. Despite this, the overall narrative is rather clever and full of hope and sacrifice. While the ending may feel a little cheap, the impact of the story once fully realised is satisfying. Unfortunately, character interactions throughout the 6-8 hour story, skill dependent, are limited mostly to conversations in the Ghostrunner’s head via direct communication links to the Architect, Zoe and Mara. A lack of traditional cutscenes restricts the narrative’s ability to fell more fleshed out, particularly in regards to the emotion of the extremely small cast.

Life on the edge of a sword

A singular weapon is used to dispose of the Ghostrunner’s enemies, a sword. As opposed to simply hacking and slashing through the enemies, single precision strikes are required to succeed. Alternate sword appearances can be found hidden throughout the levels to provide a cosmetic change only. 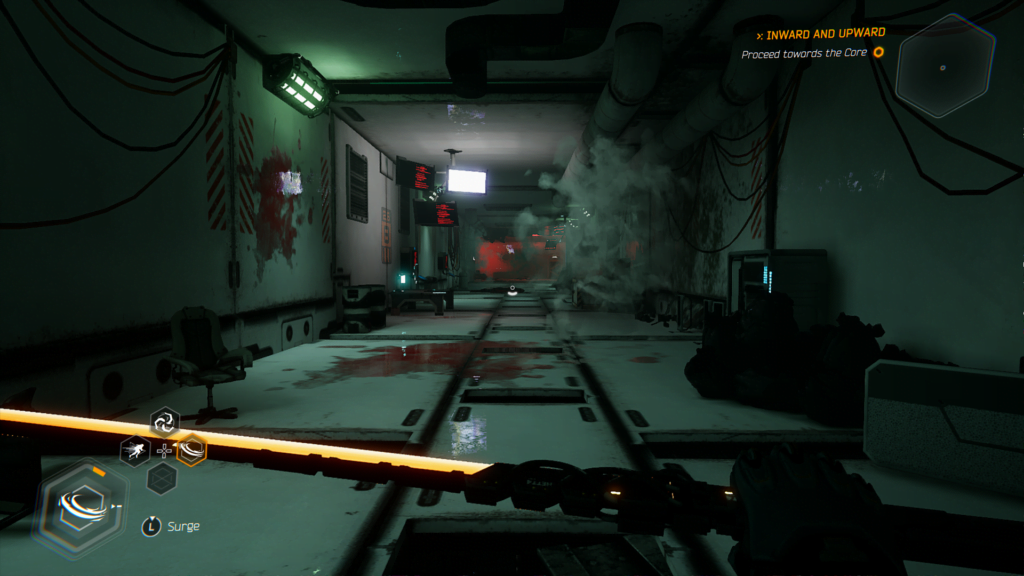 Most enemies have ranged weapons and as a single hit will kill the Ghostrunner. extreme care must be taken to avoid every shot. With precision, the shot can be stopped with a sword strike and this particular skill will require some practice to master. With a specific upgrade, this carefully timed shot can actually deflect the bullet back at its sender.

As with the Ghostrunner himself, each enemy will be killed after one hit. Getting close enough for the kill will require running, sliding, jumping and wall running. Mastering the blend of mobility, offence and defence is critical to survival. Death will occur regularly and with each failure will come experience in how best to tackle a variety of situations and hopefully reduce the number of deaths in later levels, each of which records the run with the least deaths and time taken to complete.

To be a Ghostrunner

While armed with only a sword, the Ghostrunner has additional tools at his disposal to defeat those who stand against him. Beginning with Sensory Boost, the Ghostrunner is able to slow time for a short duration and strafe, before releasing and lunging forward. This can be used to attack or evade. 4 additional abilities are obtained with story progression via training simulations in the fractured Cybervoid with the guidance of the Architect. The Cybervoid sequences are heavily puzzle based, starting as simple as collecting a number of orbs to expanding into labrynthian mazes that can easily turn the player around. These sequences, despite the benefit of the new ability obtained at the end, are the most tedious and least enjoyable. While the narrative purposes are justified, the gameplay aspect feels disconnected, slowing the break neck pace of the actual missions.

All 4 of the abilities learned are fun to use and can be activated with offensive or defensive intent and can be toggled between with the D-Pad. A meter must be filled before the abilities can be used which occurs very slowly over time but fills faster with kills.

Combining these abilities, the sword and the parkour movement system effectively make for very satisfying and fast paced gameplay. Switching between combat to environmental traversal is seamless and enjoyable, becoming more so with mastery of the Ghostrunner’s skill set. 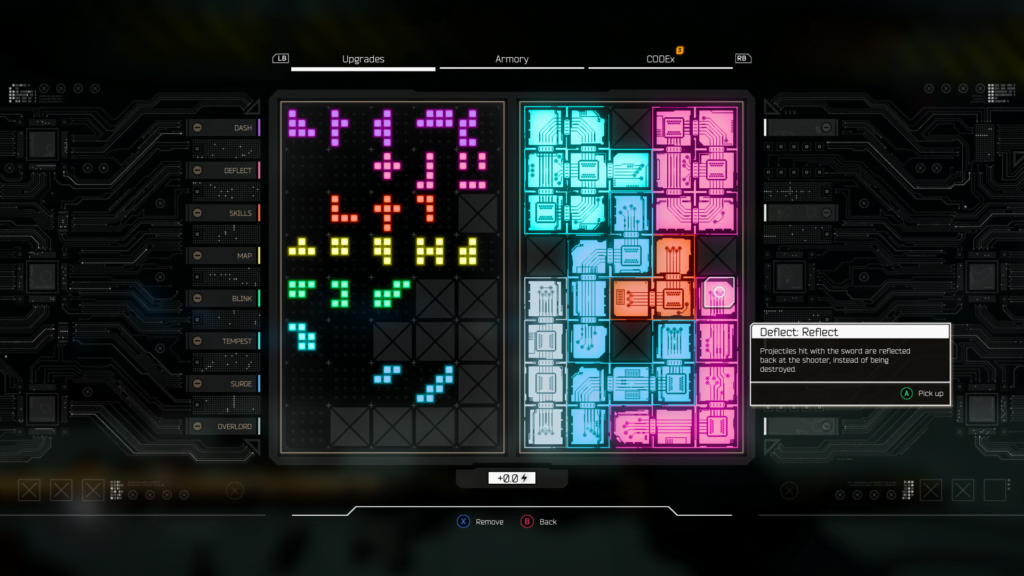 An upgrade system allows players to assign perks that benefit each of the 4 abilities as well as dash, deflect, skills and the map. These upgrades are assigned using a Tetris-like system, slotting the desired upgrades within the allotted grid. The grid expands automatically with story progression, allowing for further upgrades to be assigned. This is a fun and unique application system that does not feel out of place in the world of Ghostrunner.

The cyberpunk theme works well in Ghostrunner from its dark and grungy architecture to its cool enemy design and flashes of vibrance. The environmental detail is excellent and some of the Cybervoid sequences look stunning. The music is upbeat and energetic, fueling the adrenaline rush of traversing the environment in and out of combat. Ghostrunner is both fun and frustrating, turning the trial and error approach into a challenge with its death counts and mission completion times. I died 1,452 times over the course of my first playthrough but the instantaneous respawn makes it so easy to simply try again. The blend of incredibly fast paced action and platforming is incredibly satisfying and despite a predictable story and the stakes never genuinely feeling like all of humanity is at stake, Ghostrunner is a unique experience that is an excellent blend of challenge and satisfaction in a world in ruins.

– The insta-kill can frustrate

Developed by: One More Level

Published by: All In! Games and 505 Games